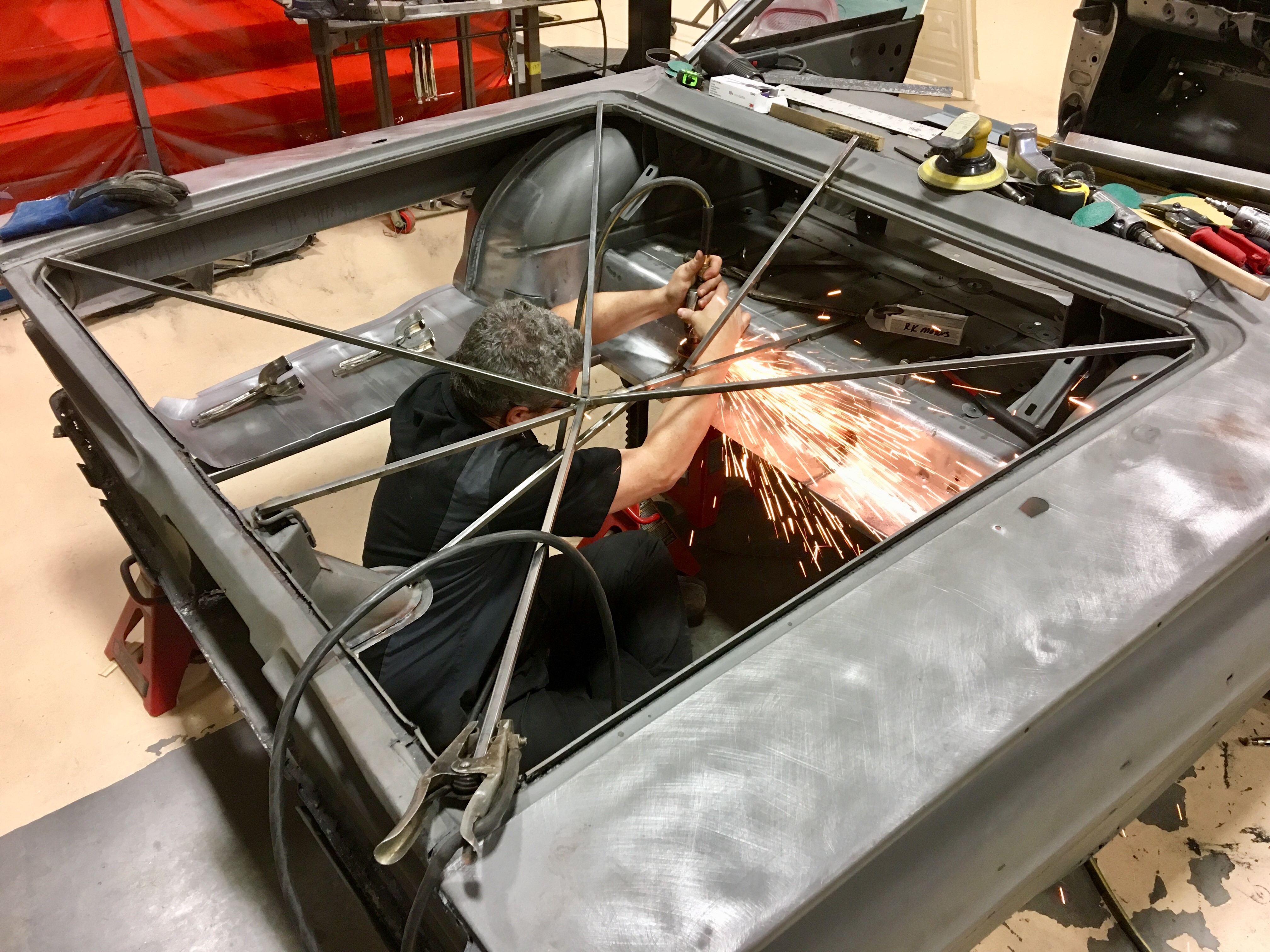 In the previous Fabrication write-up, we started building the foundation of our brazen Impala restoration both figuratively and literally. We began smoothing the car’s firewall, spent significant hours re-sculpting its A-pillars, and created new inner rockers that support new floorpans, a modified pan brace and new outer rockers. Now that the front-half of this Chevy is coming together quite nicely, it’s time to focus on the car’s worst-half: its giant trunk and intricate quarters.

Fortuitously, those massive quarters aren’t in terrible shape. At some point someone did an okay job of welding up a couple of new skins. Problem is: we’re not building an “okay” pro-tourer and, unfortunately, the metal behind those quarters is in dire need of repair.

That leads us to the trunk. To say this Impala’s trunk is a disaster might be the understatement of 2017. When all is said and done, skilled Fab Manager Darell Johnston will have literal weeks of labor in rebuilding the back of this car. As with the floors, it didn’t take much finger pressure to push right through the rotted pans, despite the chemical dip revealing a couple of interesting patches. The wheel tubs have also contracted cancer, as have the inner quarters. And the taillight panel… Well, we figure, as with most life-saving operations, we’ll take it one step at a time.

To make a restoration as slick as possible, it’s best to buy full skins. However, as we’ve mentioned in every write-up about this Chevy, replacement parts often aren’t an option. That was certainly the case with the car’s giant, intricately stamped haunches. How did we remedy that? Well, we fired up the welder and made our own quarters. After sourcing two quality patch panels, a lower front section and a rear section, we executed small cuts that snugged the patches to the car’s existing shape. Now, as a brief aside, it’s often difficult to find quality replacement metal because of stretched dies or poor quality control. But, given the age of this Impala’s tooling, we were fairly pleased with the quality of our new pieces. They’ll need to be worked a bit during the Body process, but nothing more than what’s typical. Anyway, back to the project. We used a few drilled holes, along with holes for the car’s trim spears, to Cleco the patches to the side of the old quarters. Once we had our real-world template, we butt-welded the two patches together and hit the seam with a grinder. That got our first custom quarter to the point where it’s ready to hang. 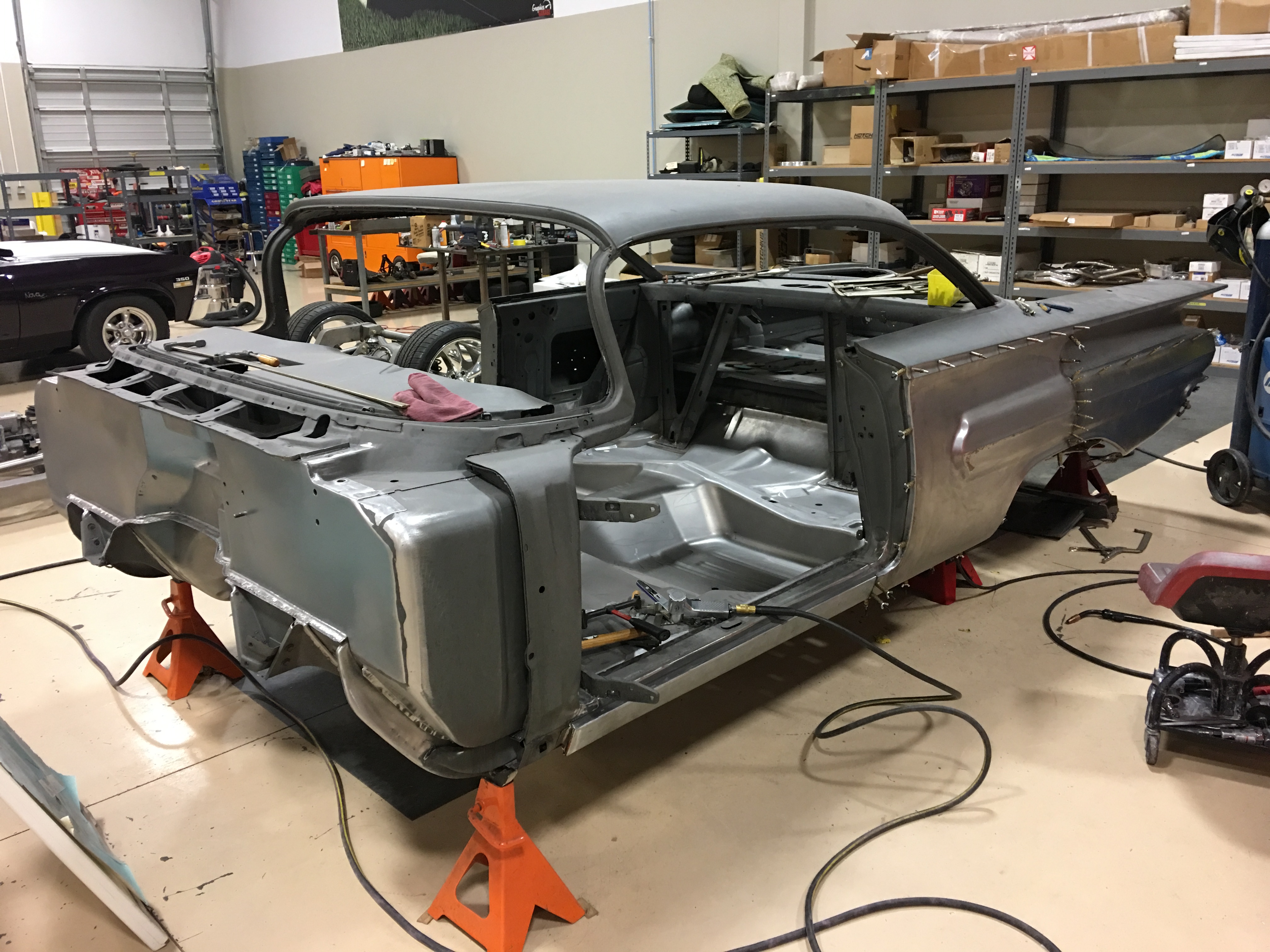 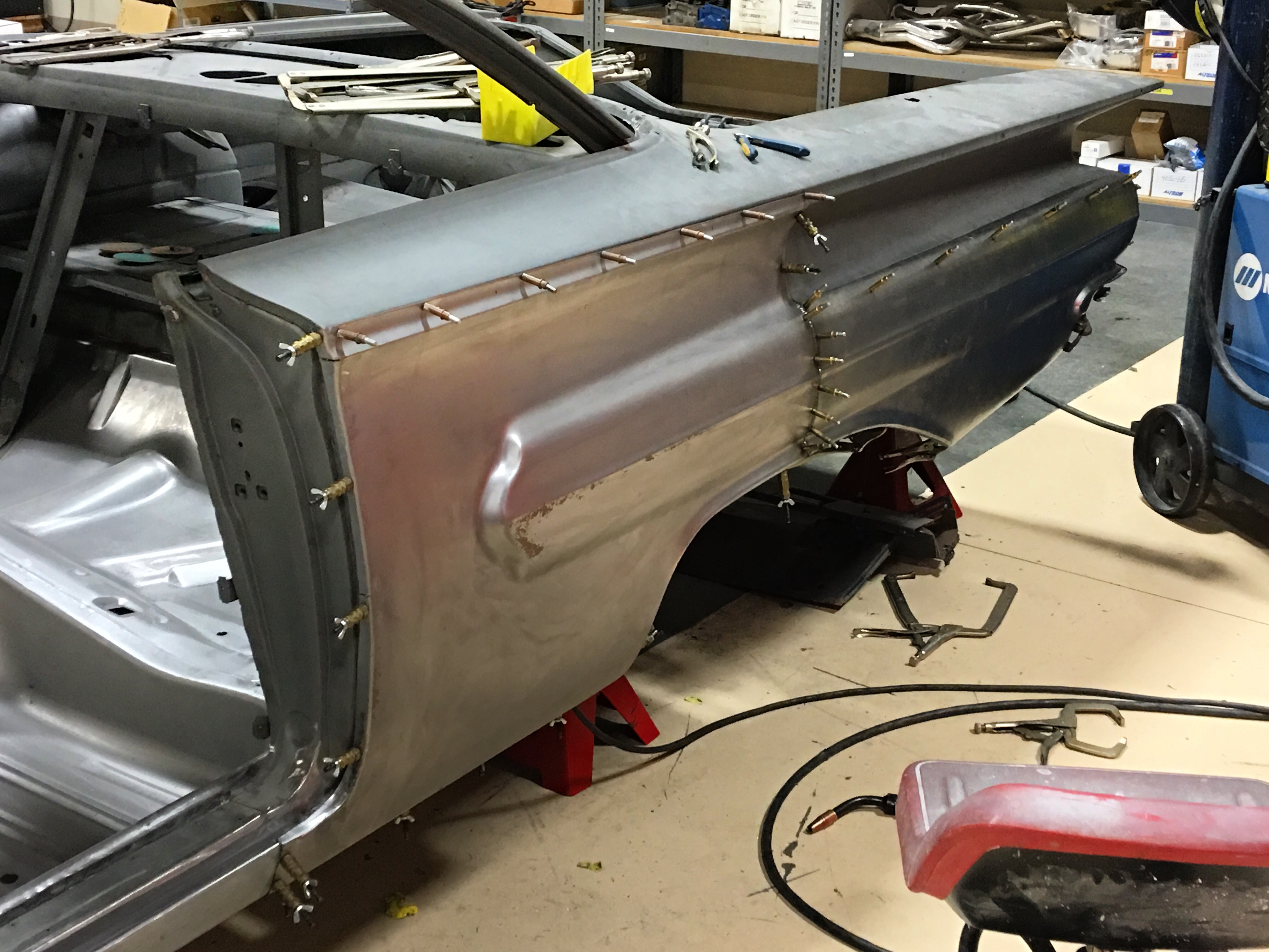 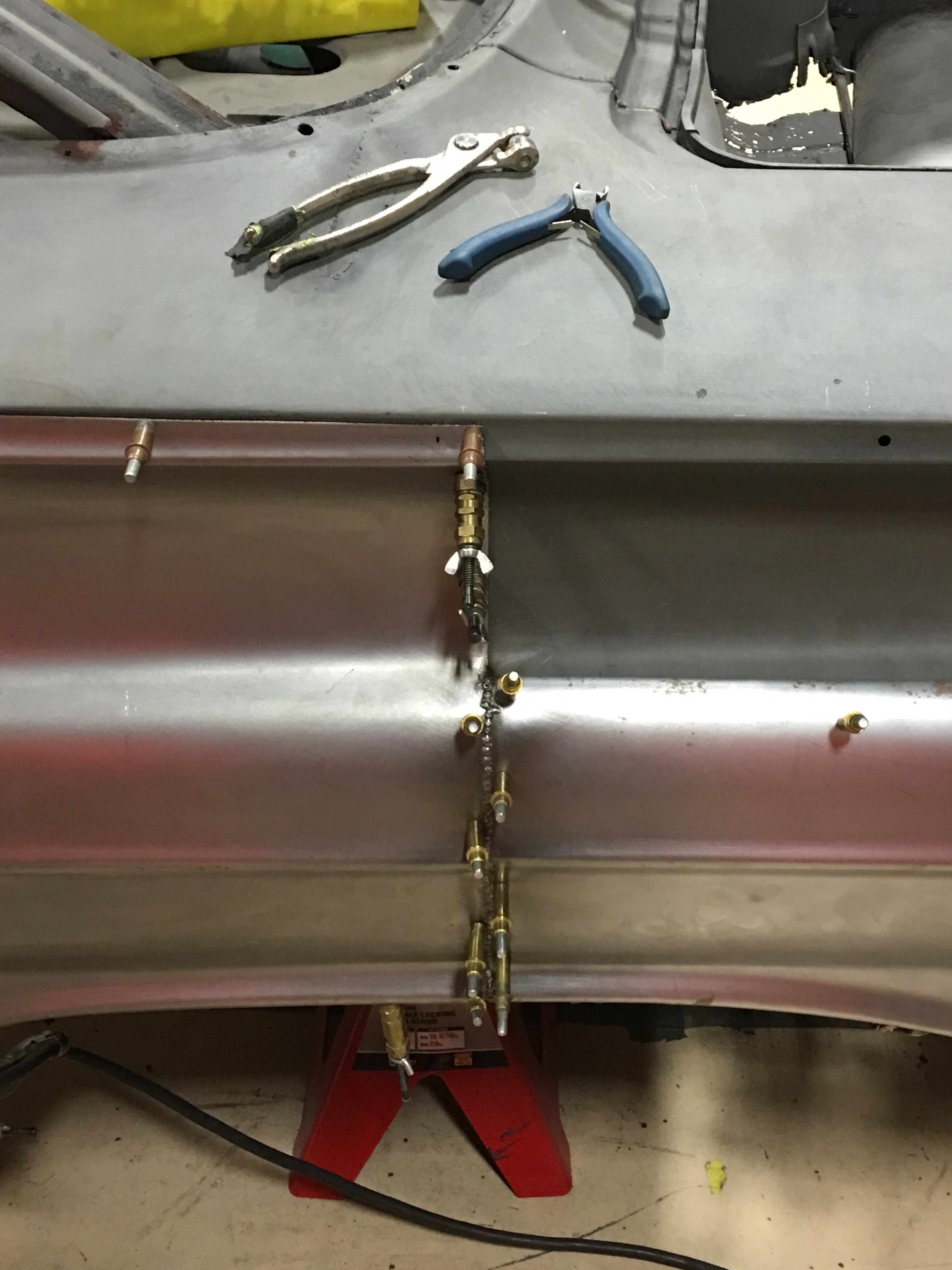 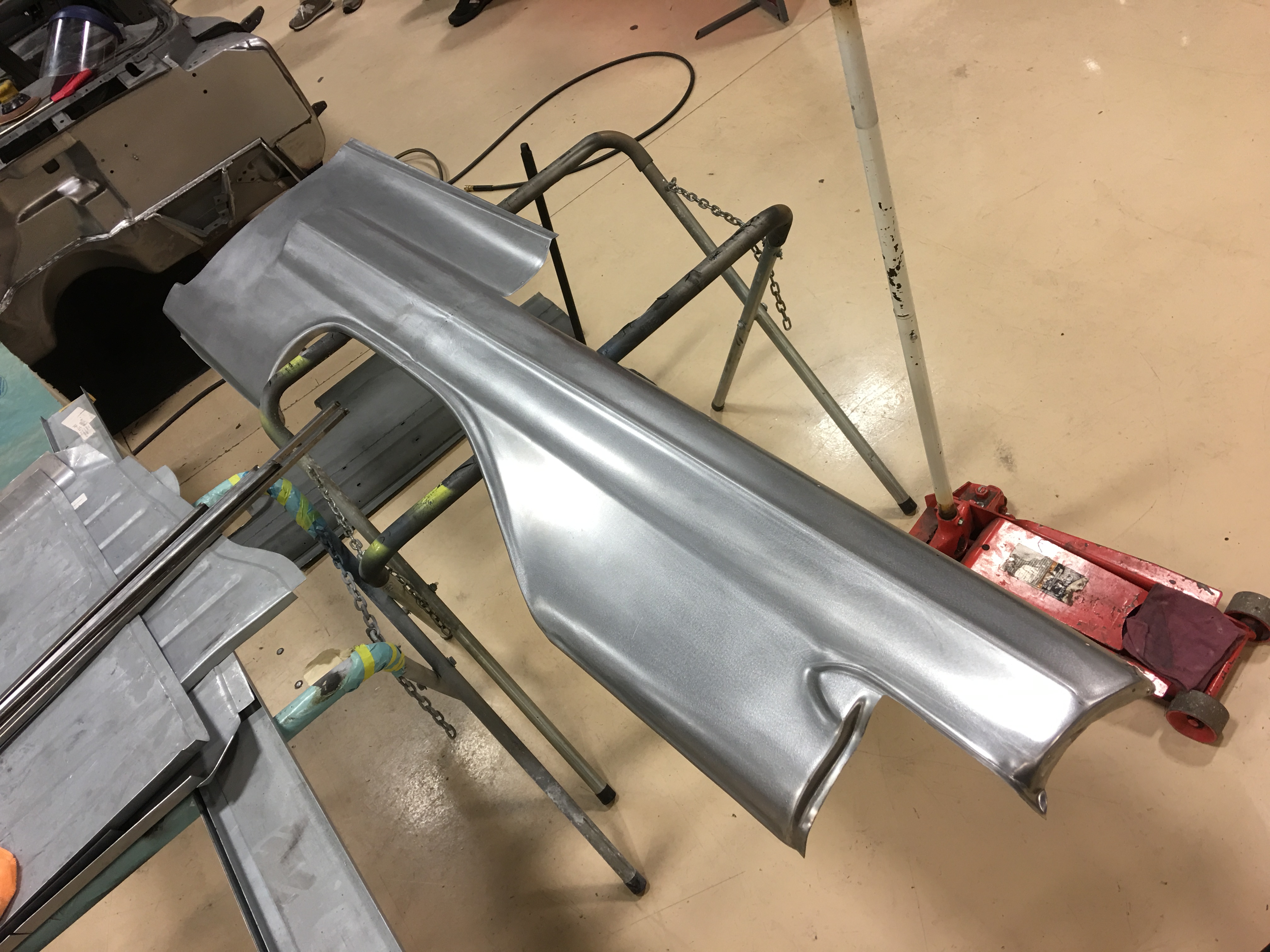 Bear in mind, we’re nowhere near the point of putting new quarters on this project, so I told you a small story to show you the big picture. We went ahead and created the first quarter so we could cut the existing panel off and assess the amount of fender tub repair we’ll need. Simply put: the car isn’t structurally sound enough to lose both quarters at once. At this point in the process, it’s important to note that cars with massive fins tend to have a lot of weight in their rear ends. And since this Impala’s structure is so lacking, we went ahead and reinforced the left fin with strategically placed tabs that were welded to solid points on the inner quarter. It’s just one more way to keep the rear of the car from sagging while we perform the needed repairs.

During the planning phase, the car’s owner was toying with the notion of retrofitting custom wheel tubs and massive rear meats. But it was decided that we should just repair what we have. As you might expect, most of the rot in the tubs is at the edges where they get constantly pelted with water. So, in addition to cleaning up surface rust, we’re just cutting back as far as needed to get to solid steel, then custom fabricating new wheel lips. 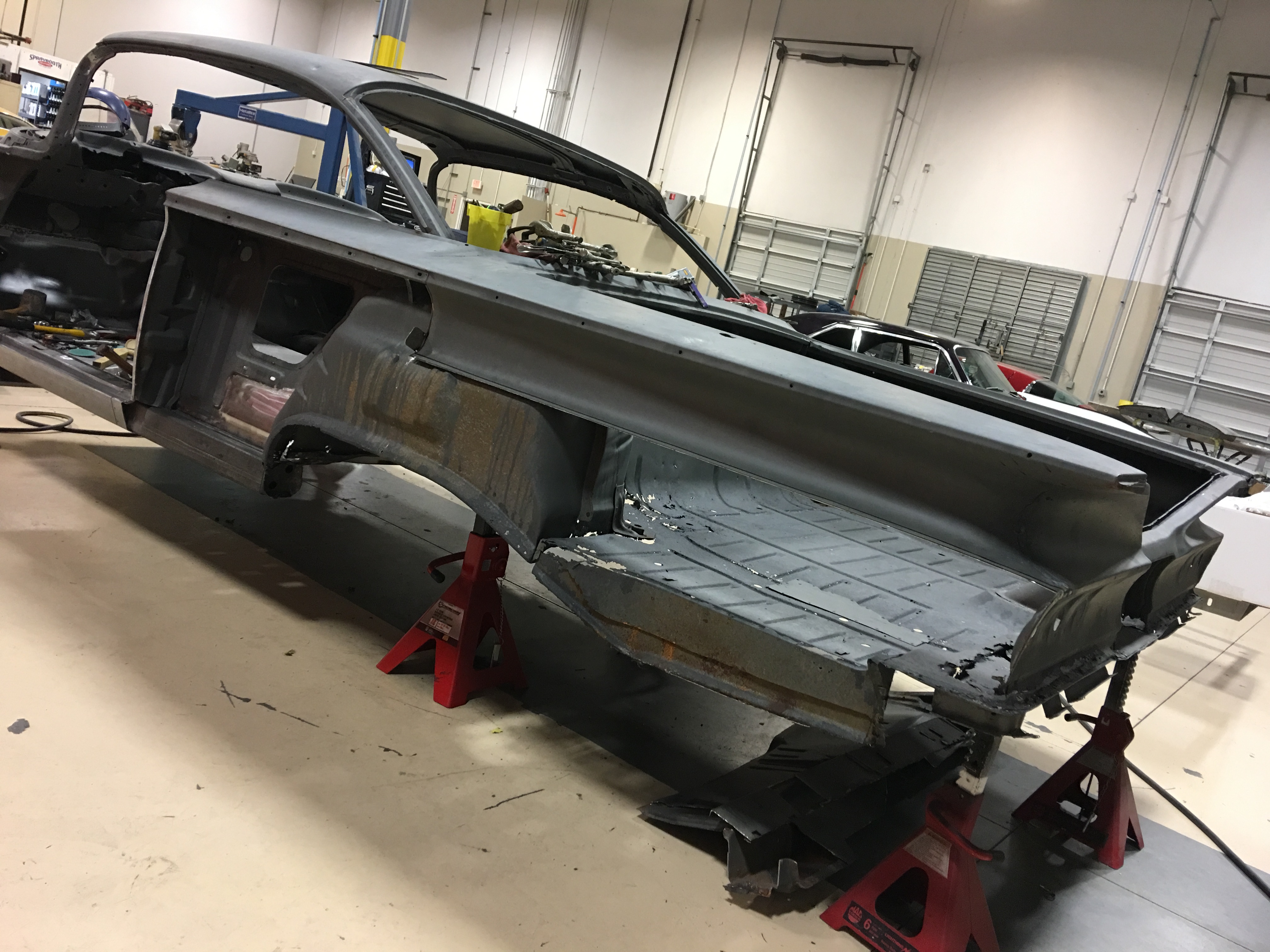 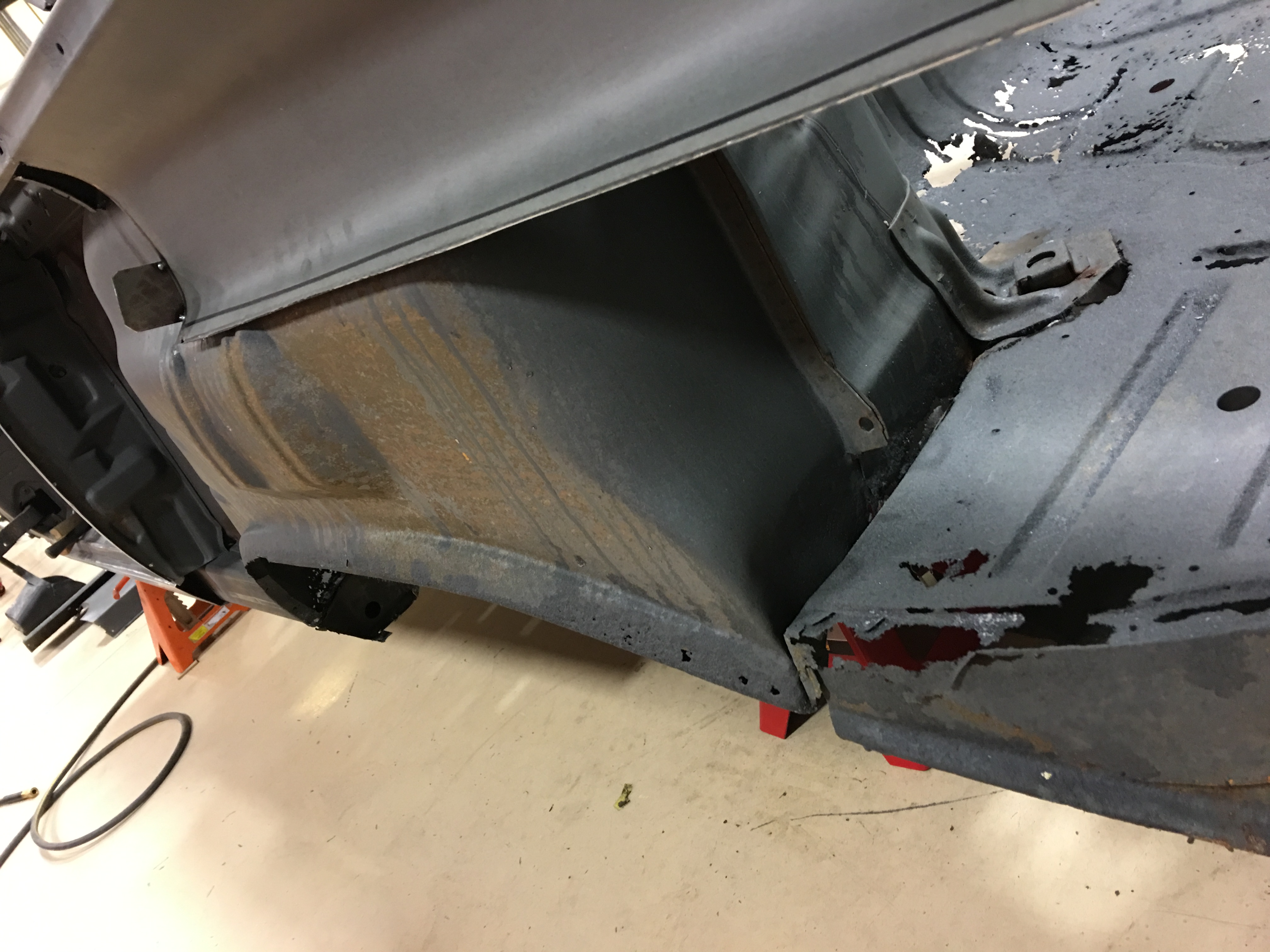 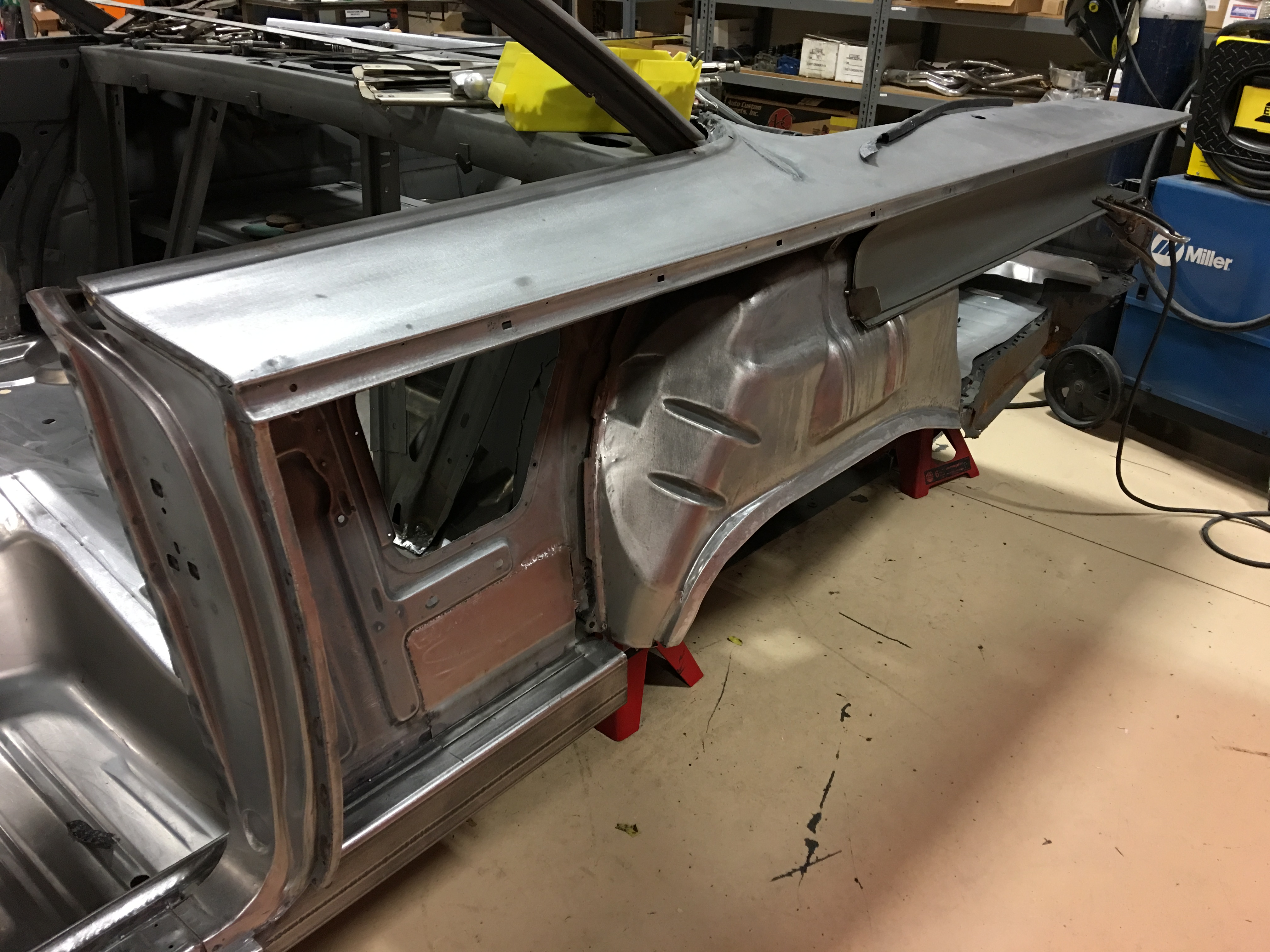 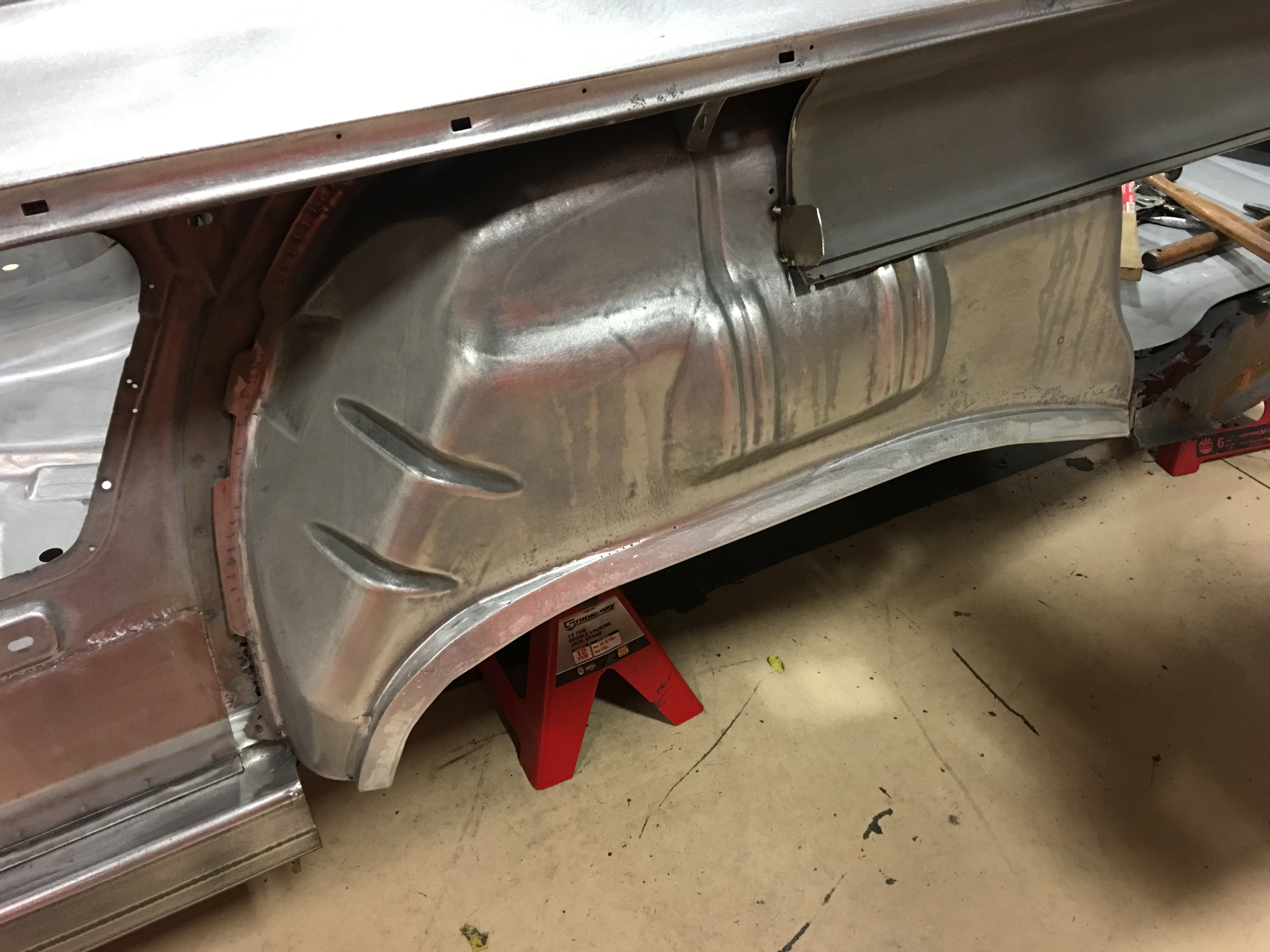 About that trunk… You know, the one that basically doesn’t exist, as a full piece, in the car or the aftermarket. One of the greatest advantages of building a pro-tourer is the decades of engineering expertise you can cram into a vintage wrapper. If you go back to our Deconstruction article you’ll see mention of a custom Roadster Shop chassis. Those impressive bones will certainly stiffen this big Chevy, but we’ve also incorporated things like beefy inner rockers and the custom trunk support you see in this picture. 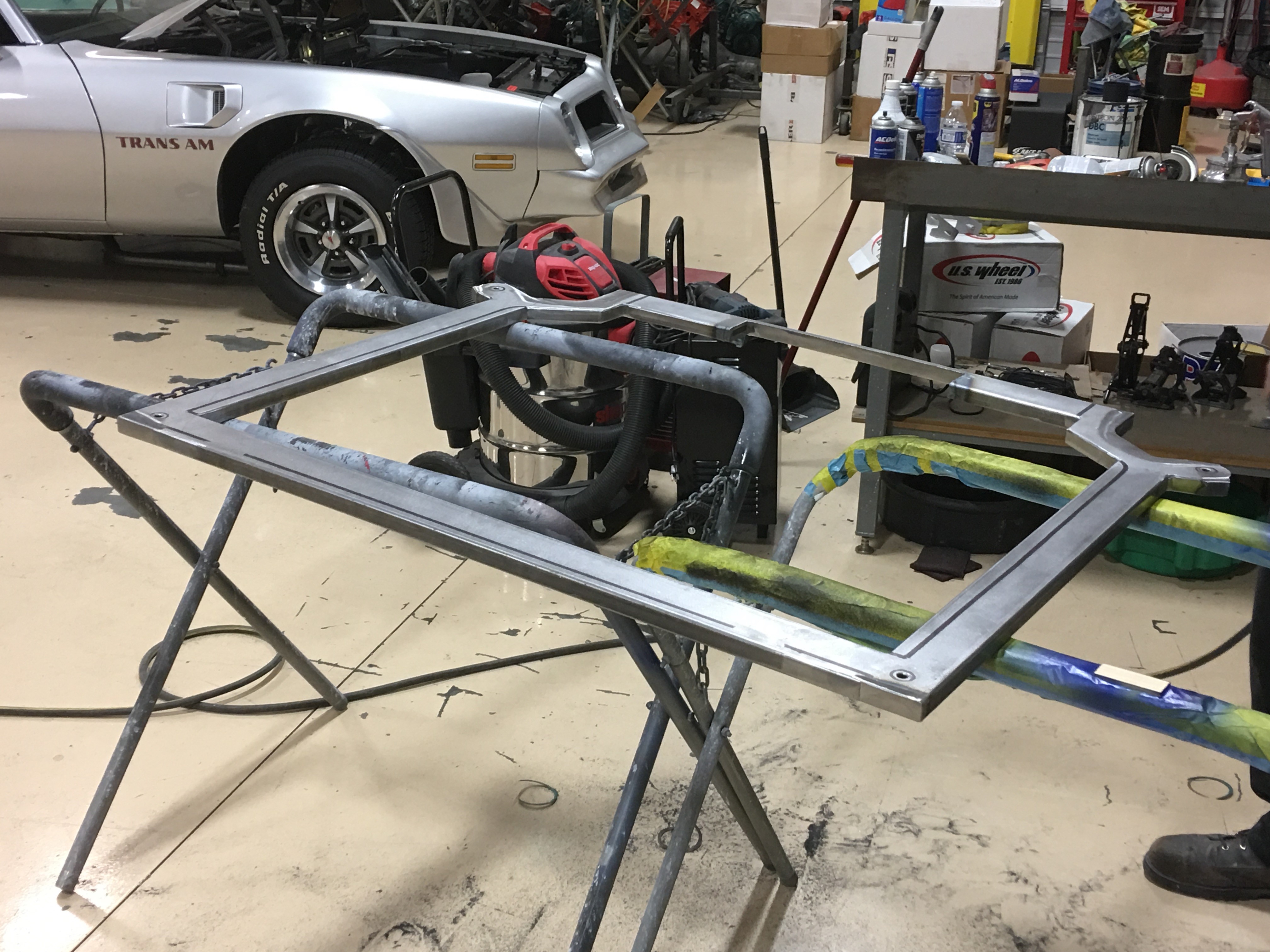 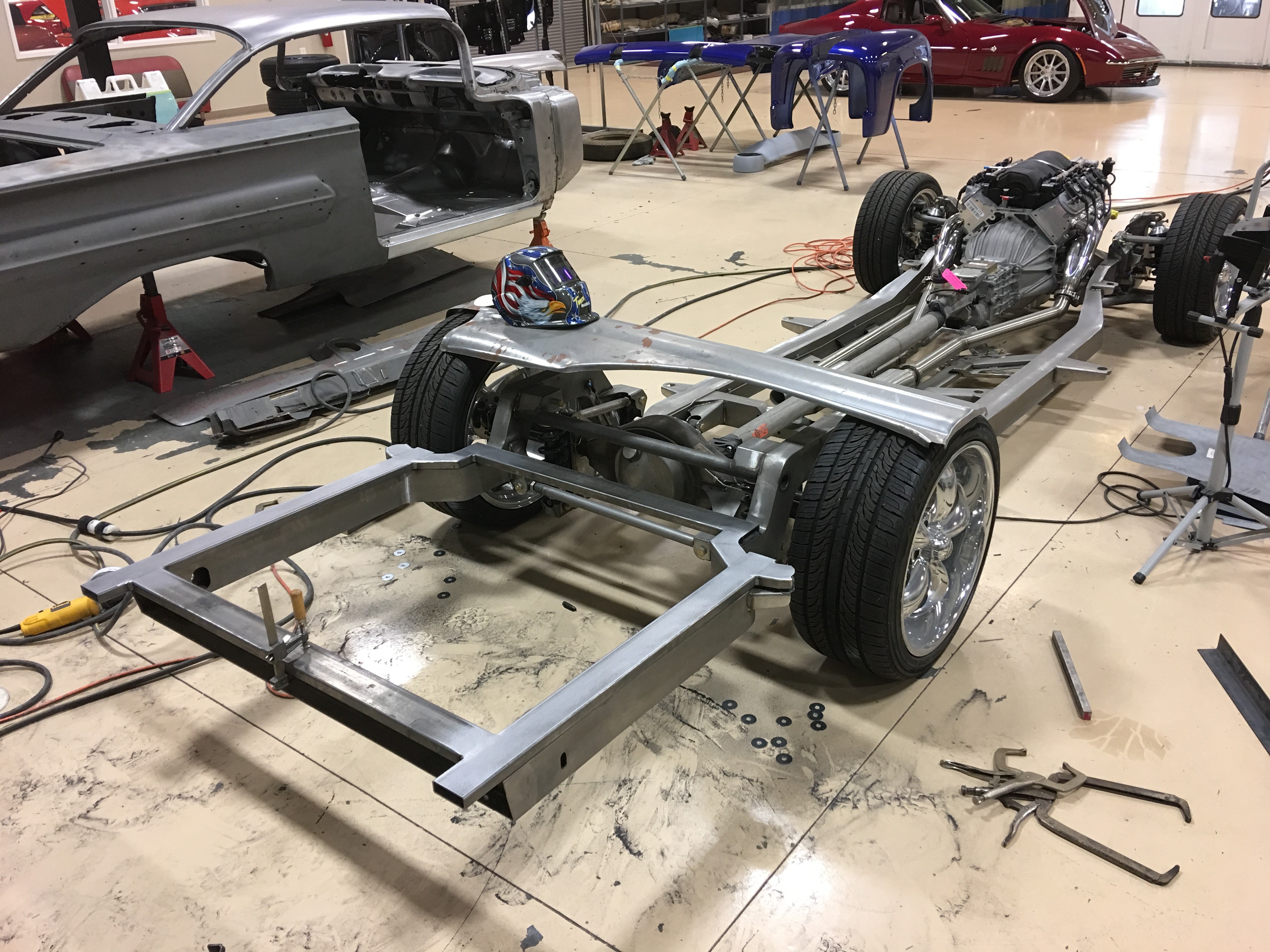 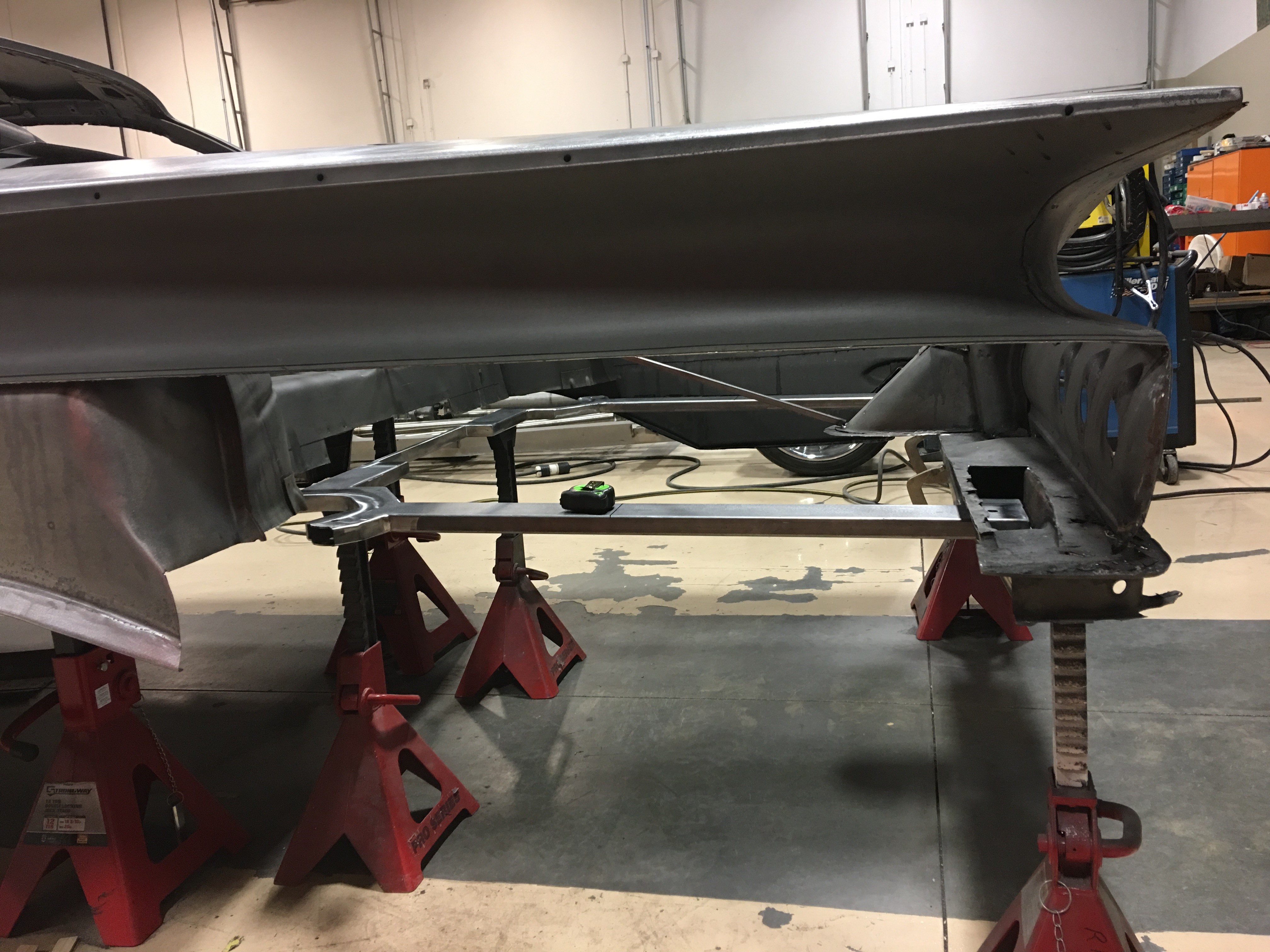 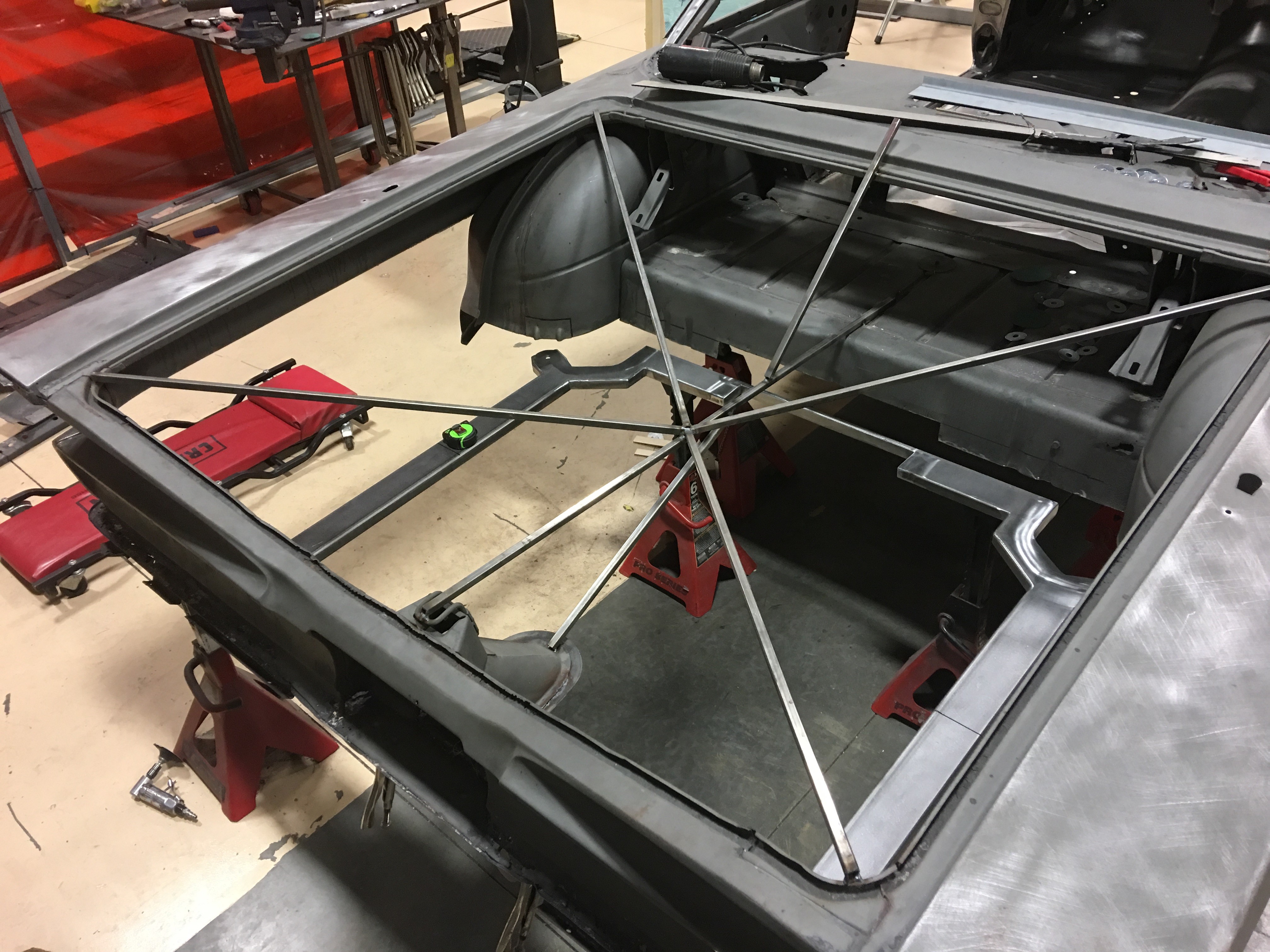 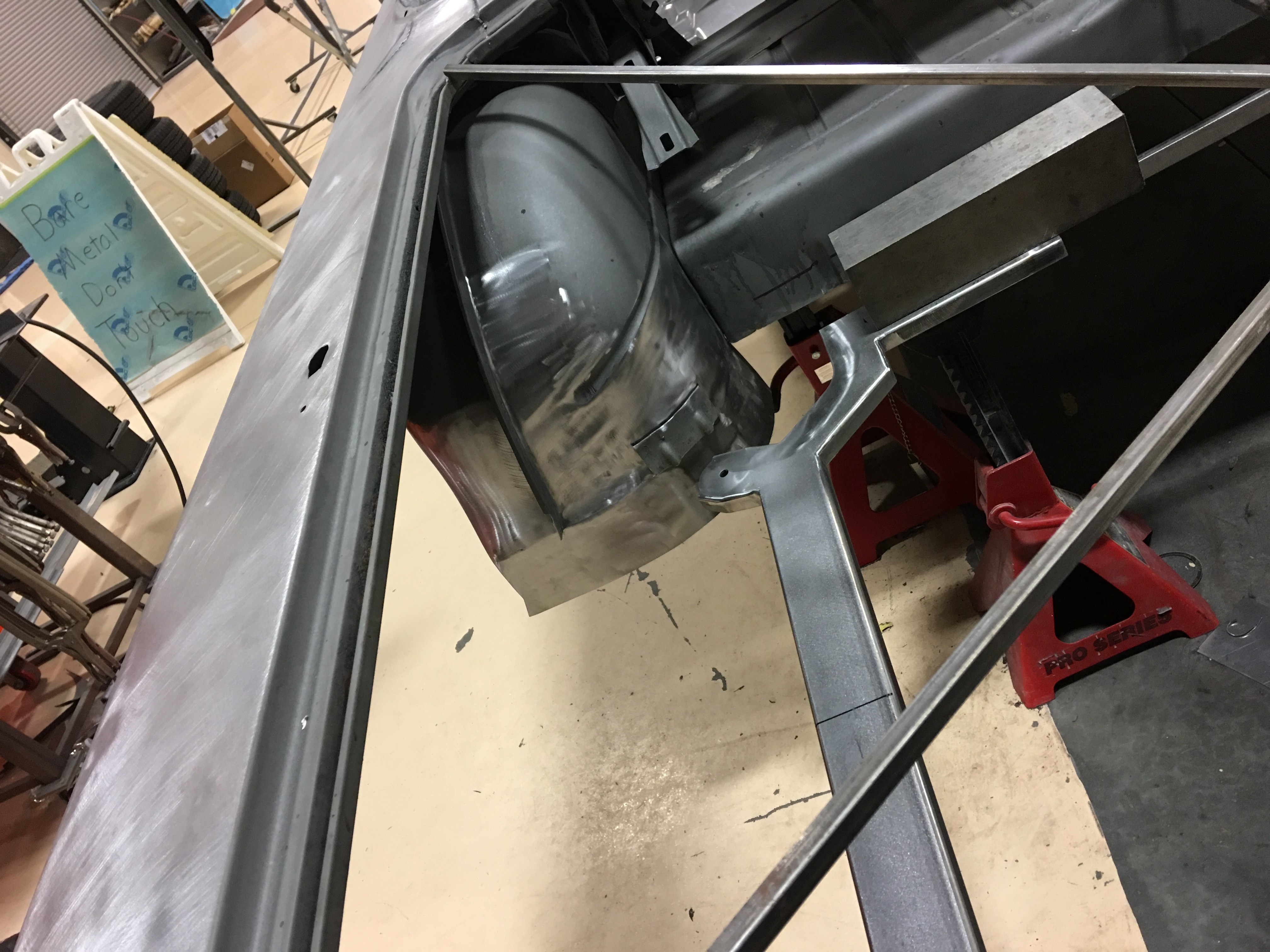 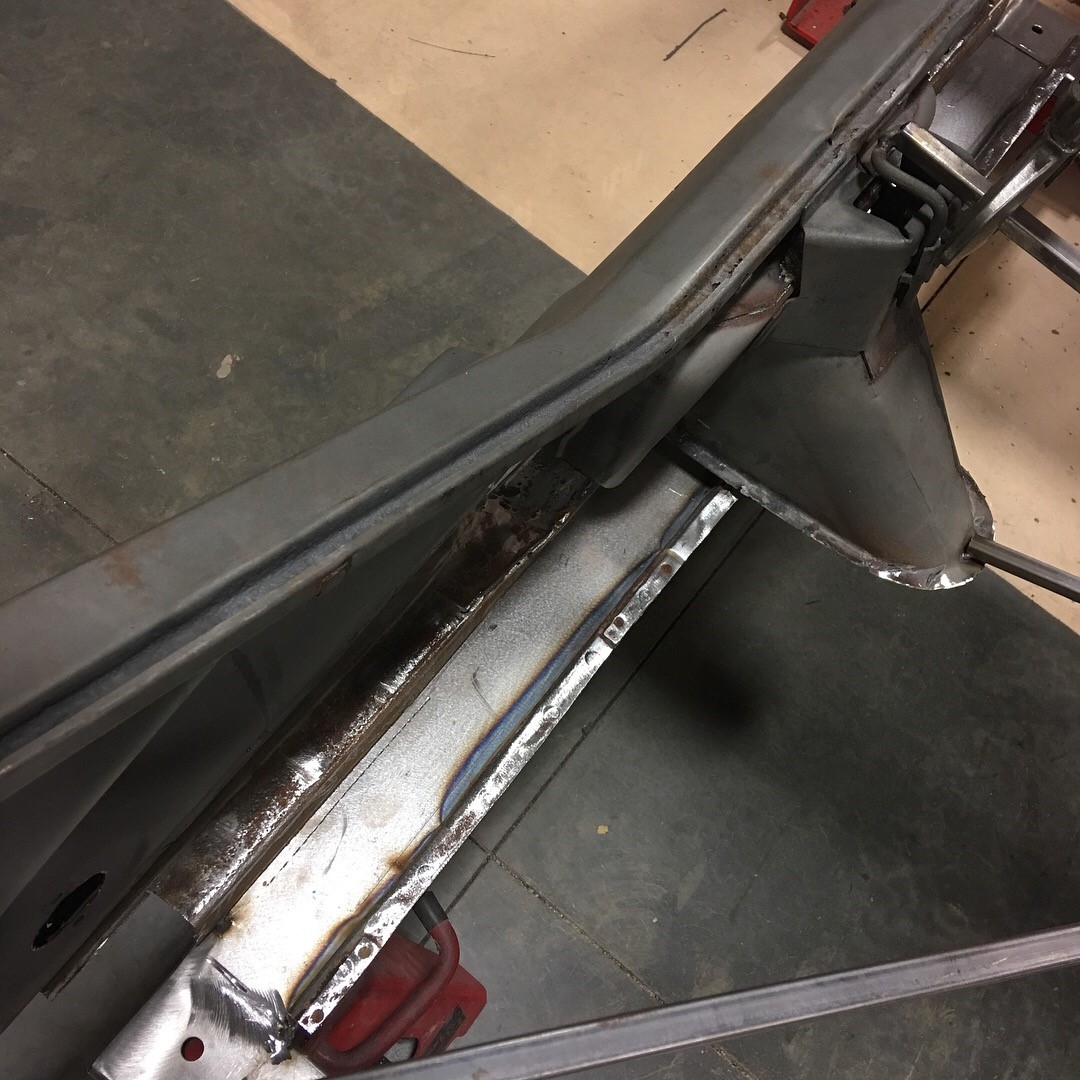 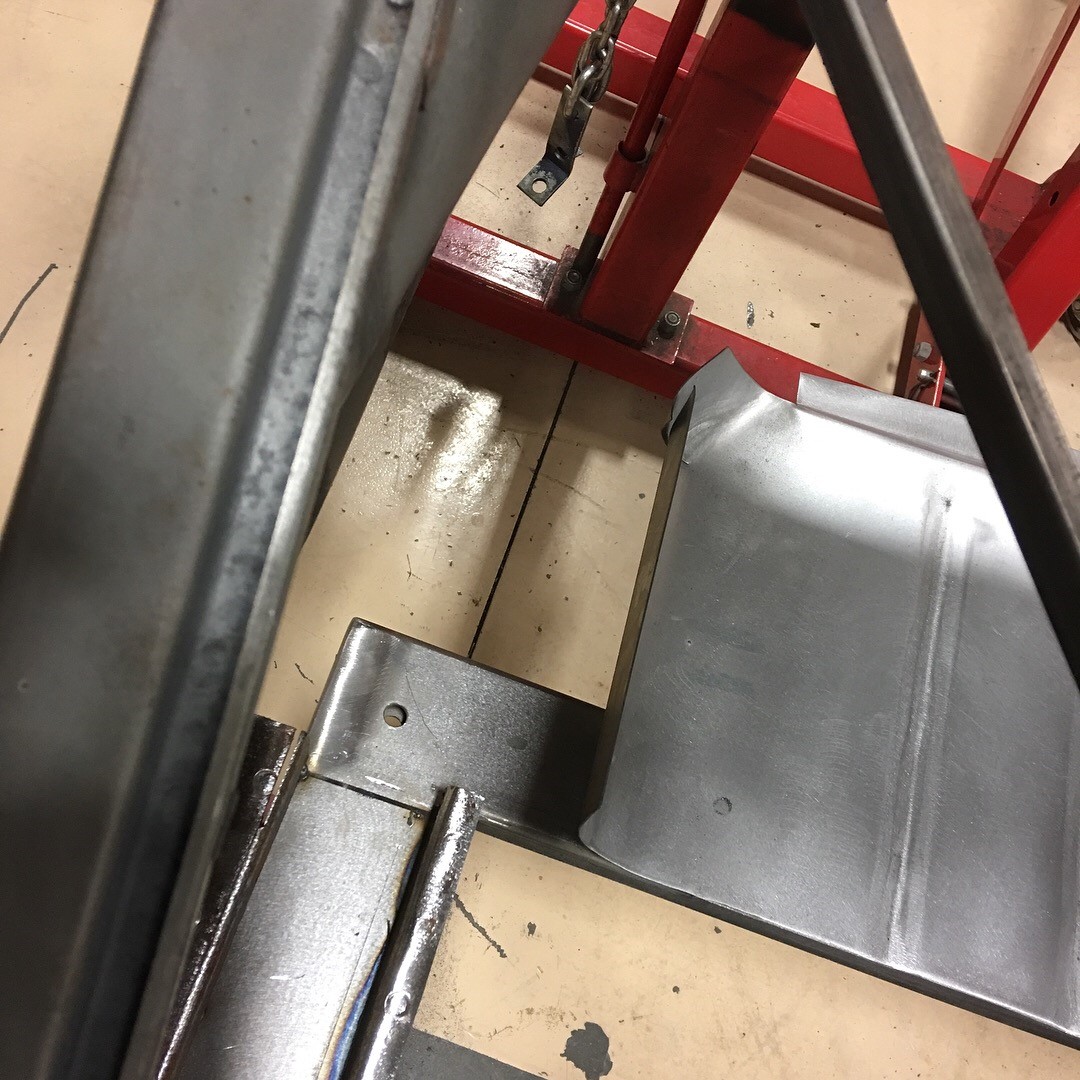 The idea behind this support was threefold. As stated, it’ll make the car feel more solid. It’ll also nicely tuck our 20-gallon Rick’s fuel cell, complete with a built-in Cadillac CTS-V pump. And, since the back-half of the car was so rotted, it gives us fresh structure to weld to. 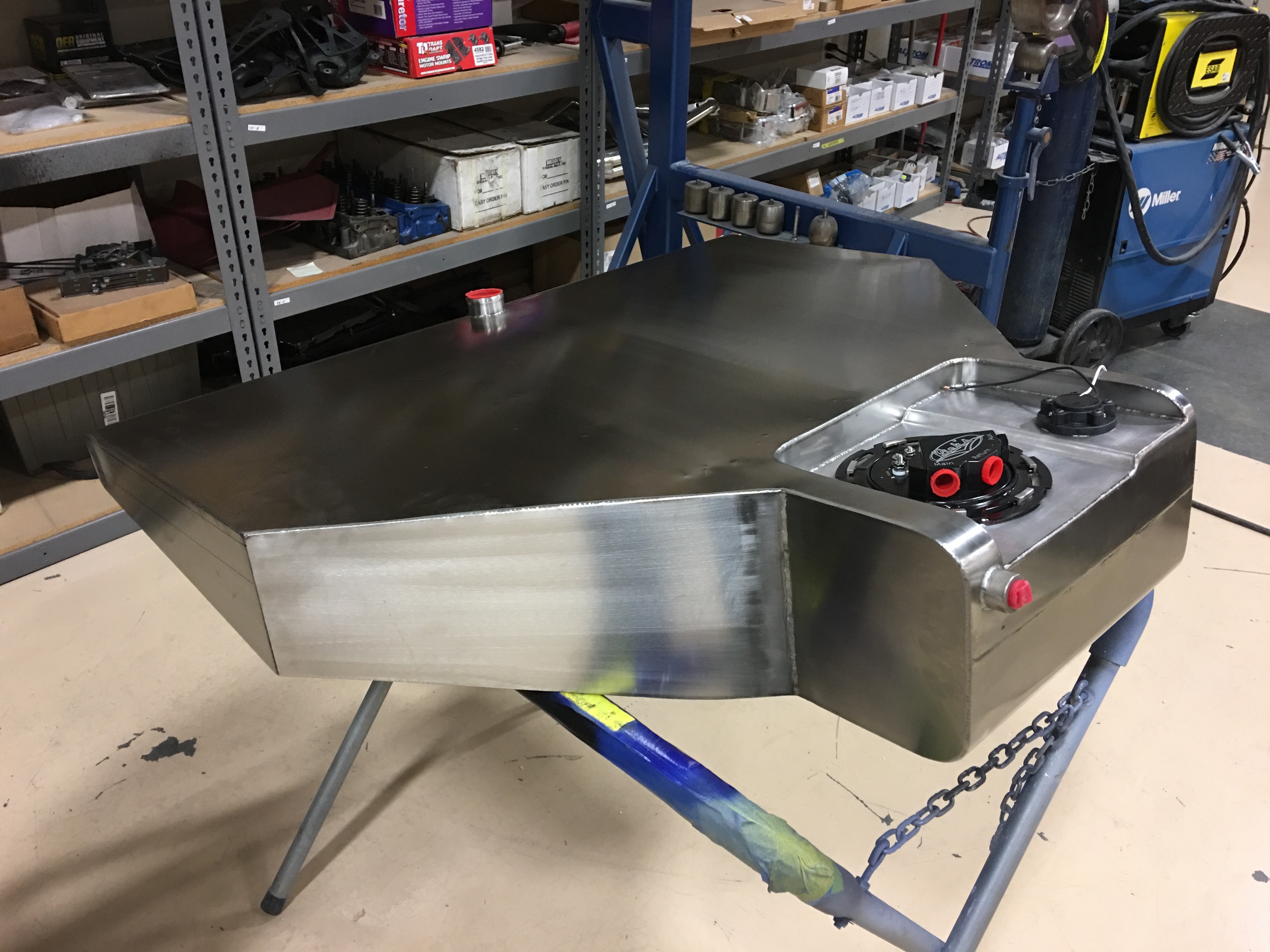 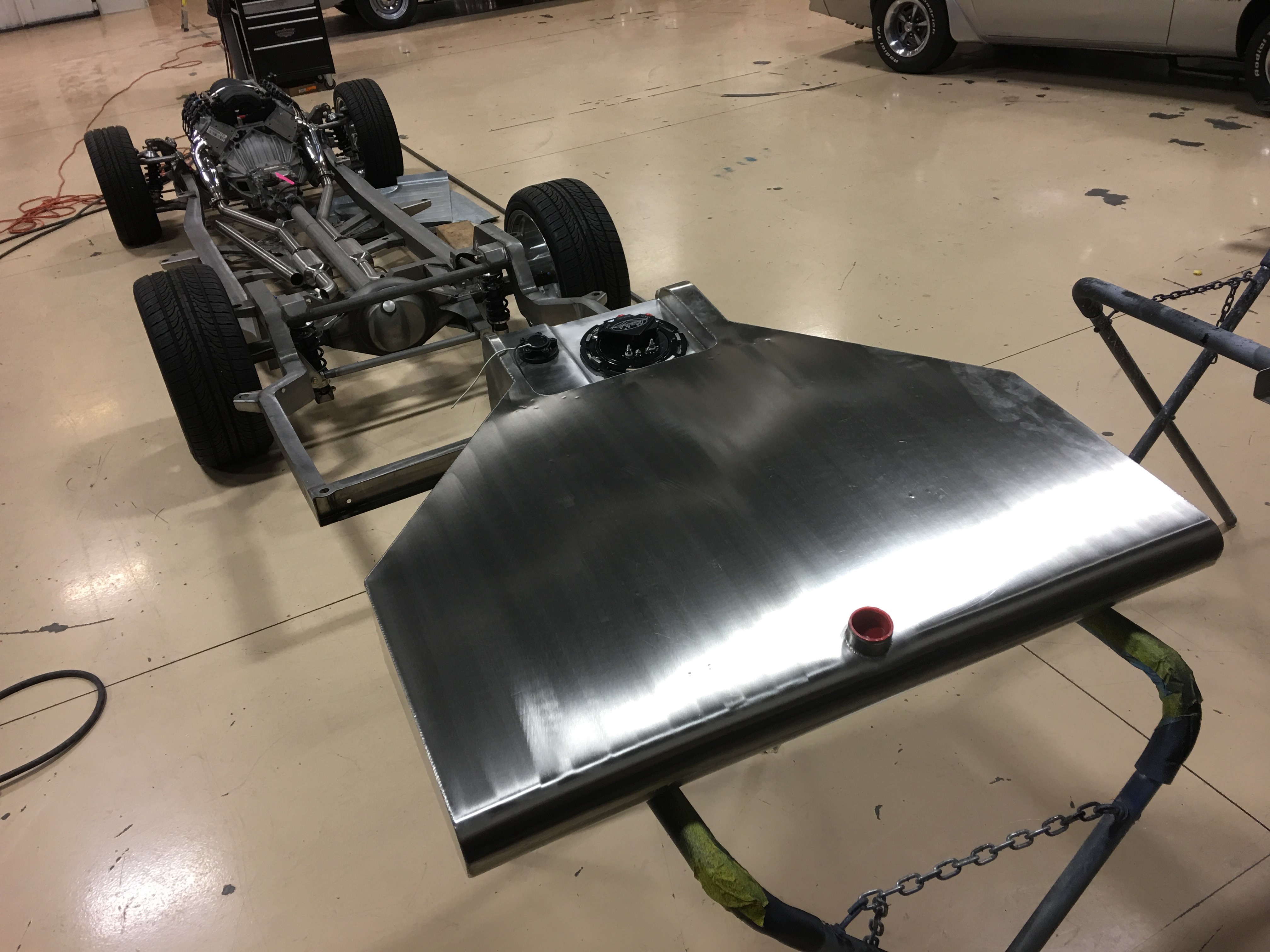 Okay, time to hold our breath, cut out the old floor and hope for the best! I’m kidding, of course. We began the trunk extraction with the usual ritual of calculated measurements and careful spider bracing. Additionally, we hooked the taillight panel to an engine hoist just to make sure nothing sags. See why we left that passenger’s side quarter in for now? 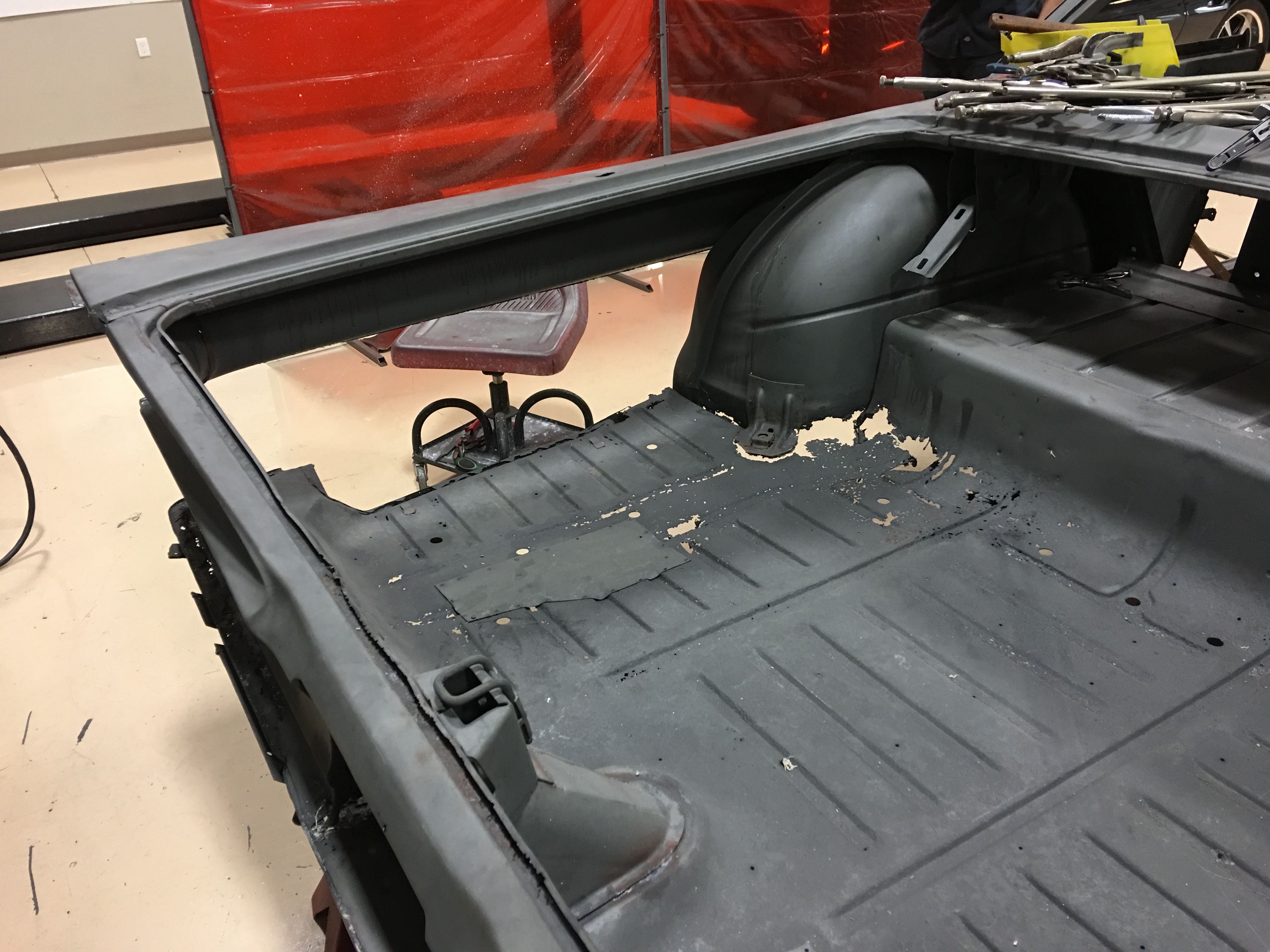 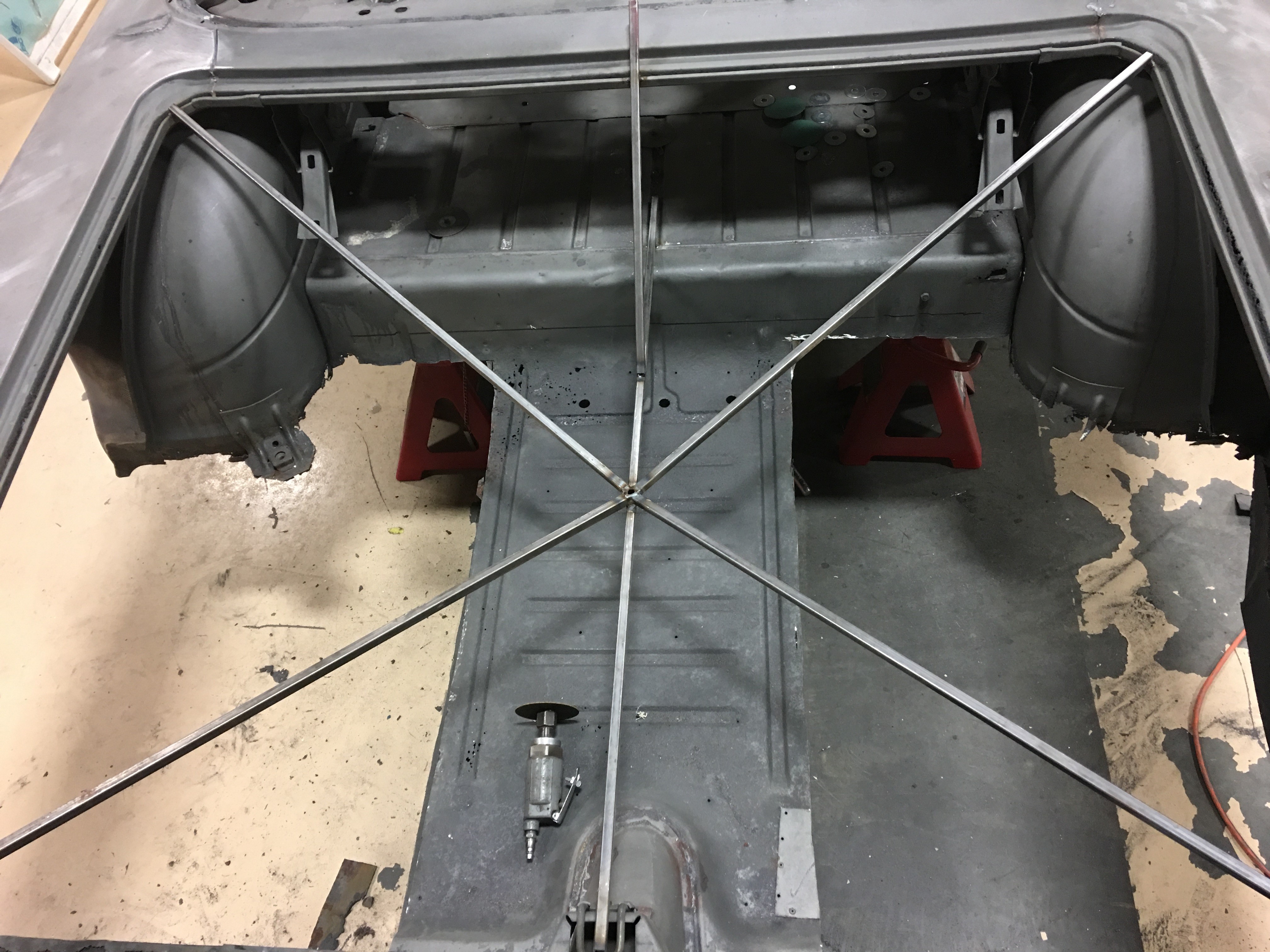 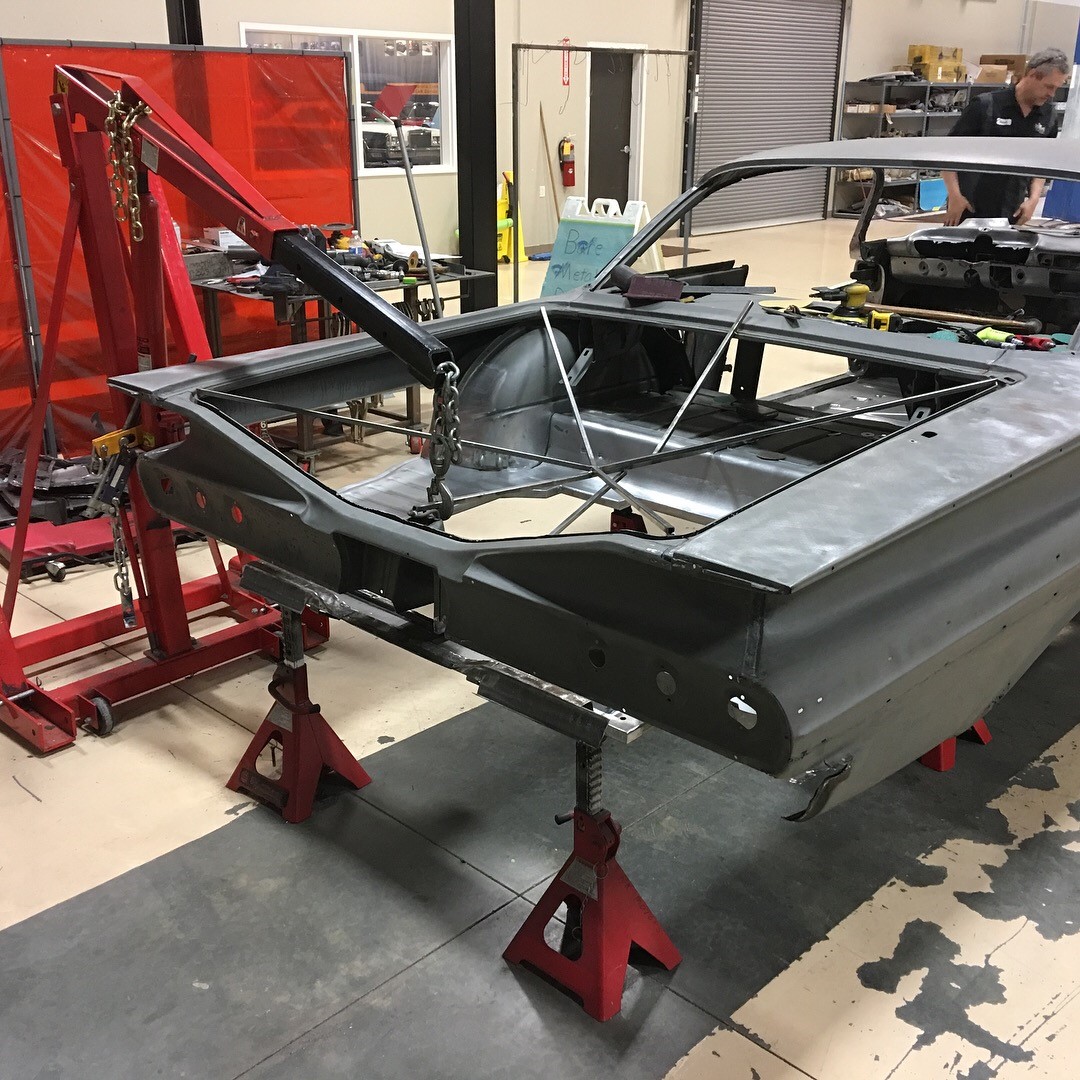 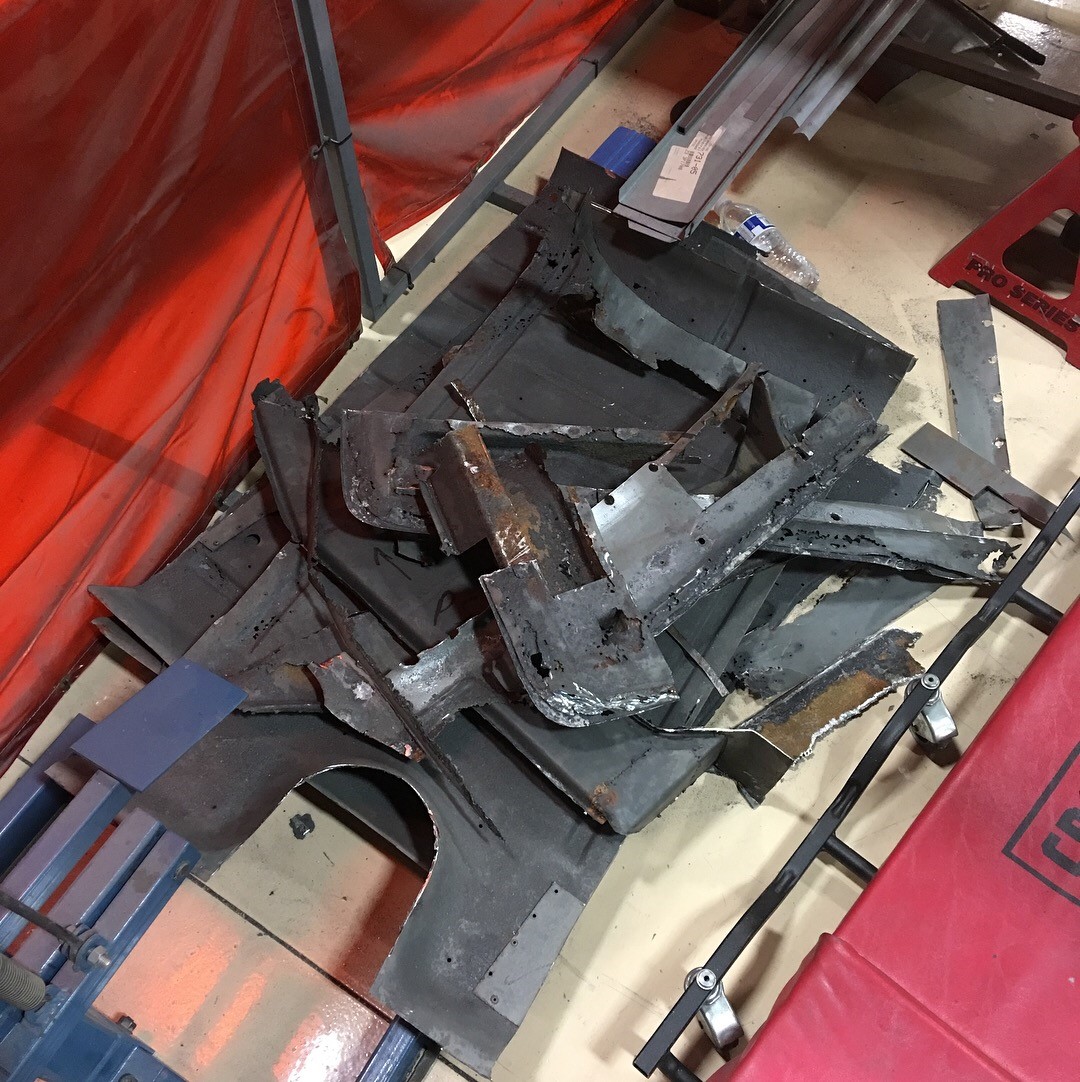 After a bit of searching we did locate some good trunk pan patches, but they needed trimming and a lot of finishing to accommodate our new structure and massive fuel cell. With the patches in we created additional bracing to temporarily support the back of the car, and began welding the taillight panel to a new crossbeam. Cosmetically, the taillight panel itself has survived almost 60 years with only minor pitting. However, its support, meaning the part behind the bumper, was completely rotted. That resulted in more hours of shaping, welding and grinding. With those repairs complete, we slowly cut out the spider brace, lowered in the fuel cell and revisited our ritualistic measuring to make sure the car remained properly aligned. And we’re happy to report that this Impala is still straight to within one-sixteenth of an inch. When all is said and done a custom fuel filler will align with the car’s factory tag box. The plumbing for the cell will run cleanly and directly out of the right side of the trunk. And small corner panels will allow easy removal of the cell should any mechanical issues arise. 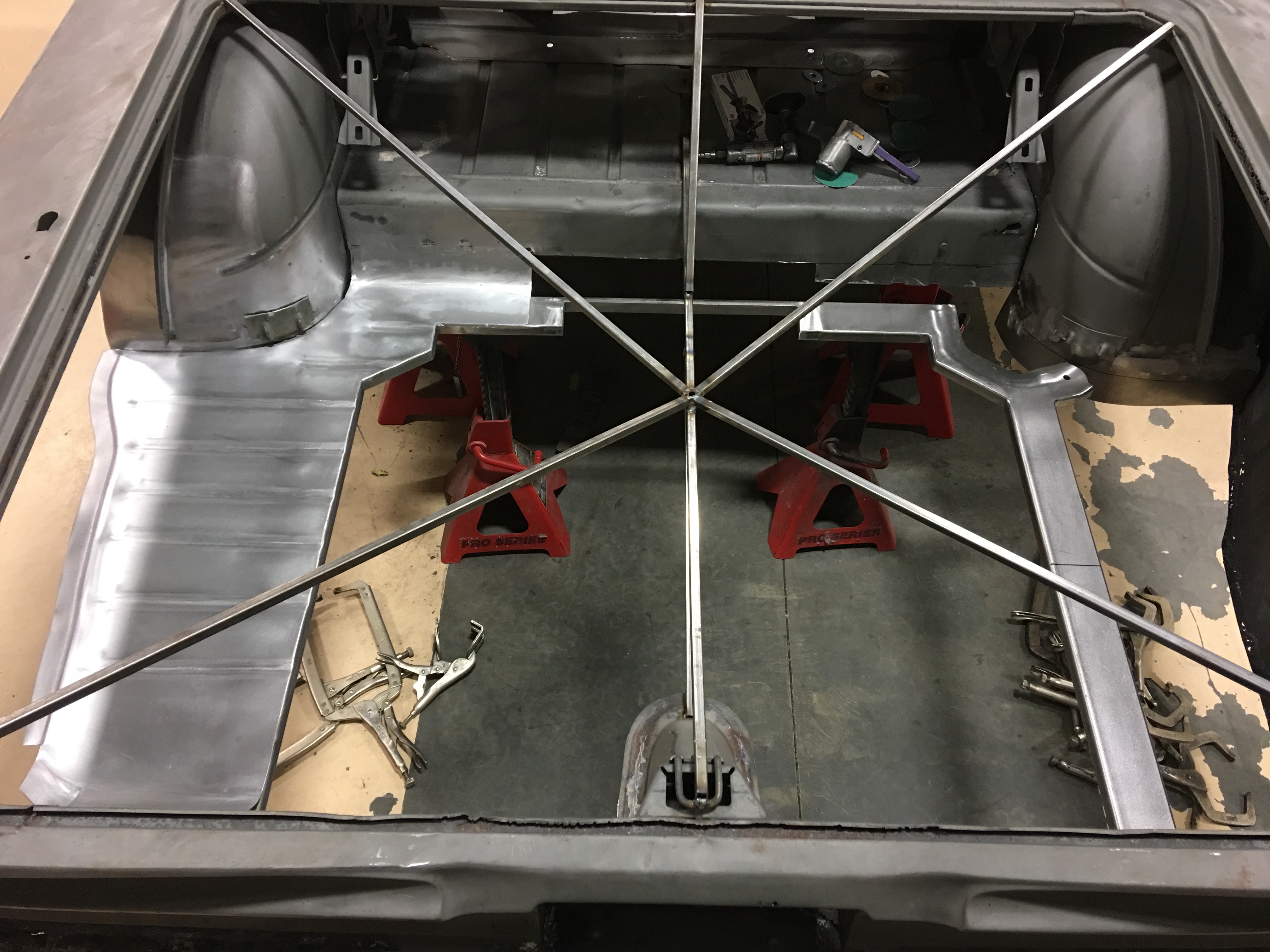 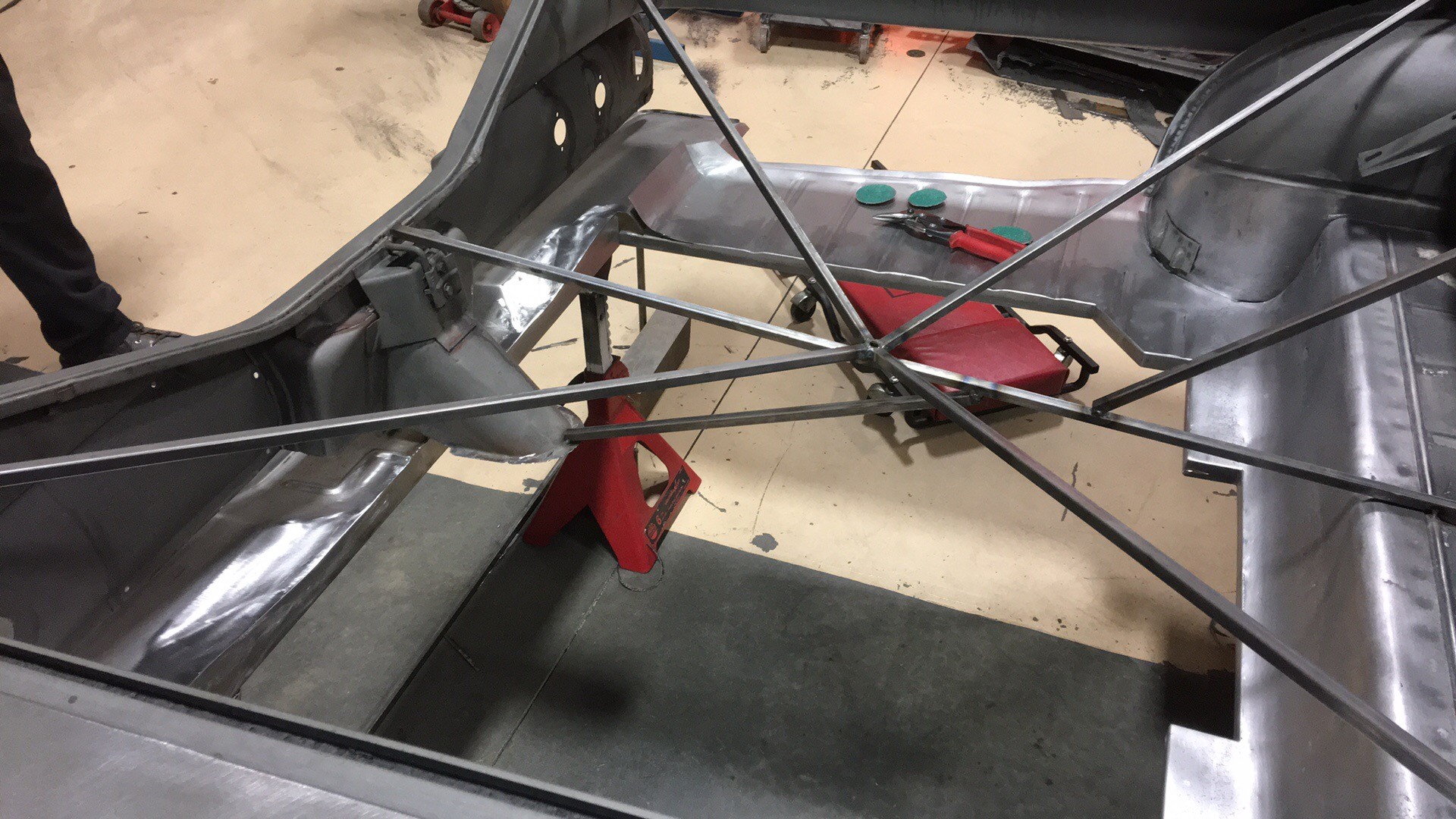 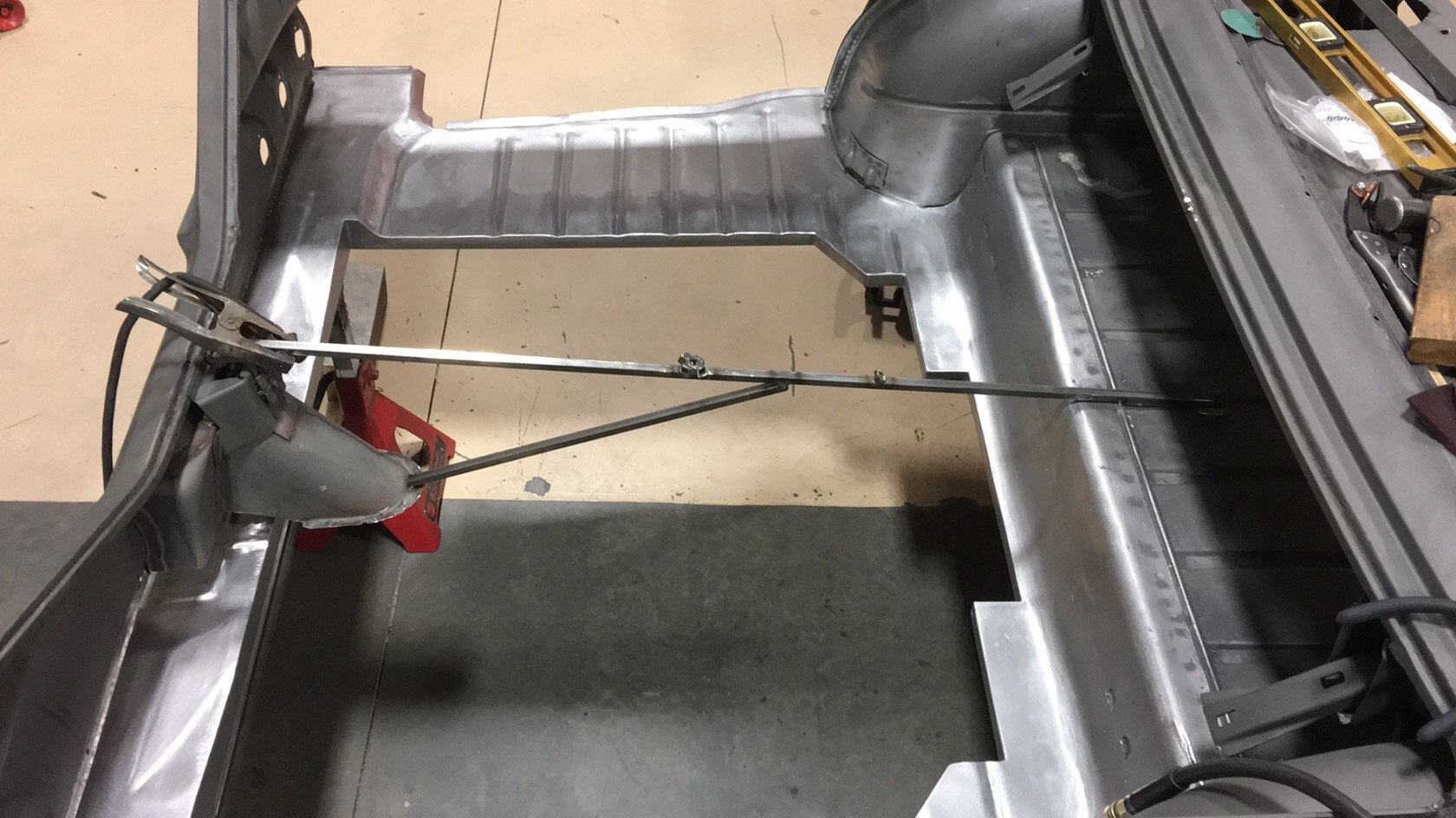 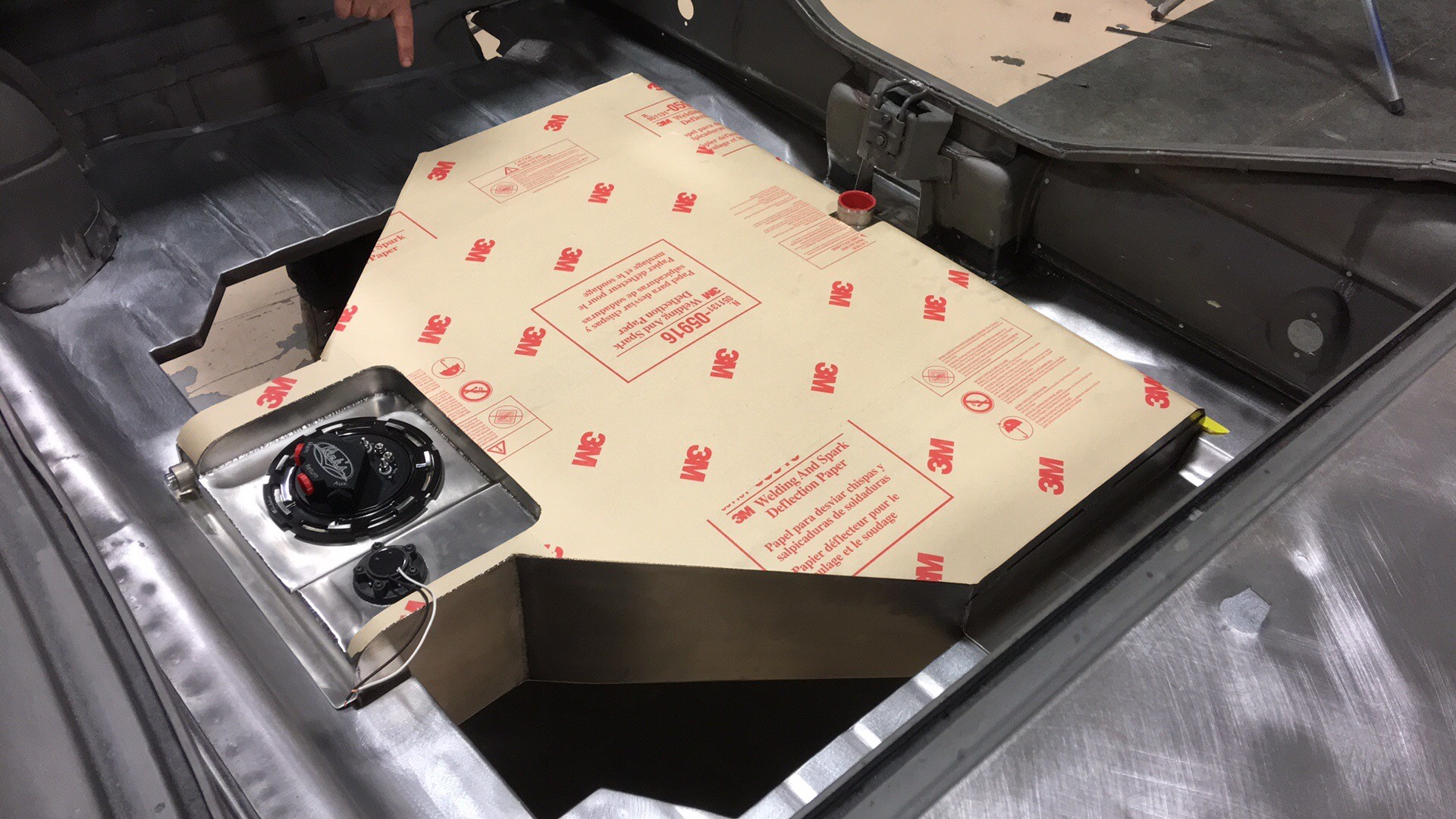 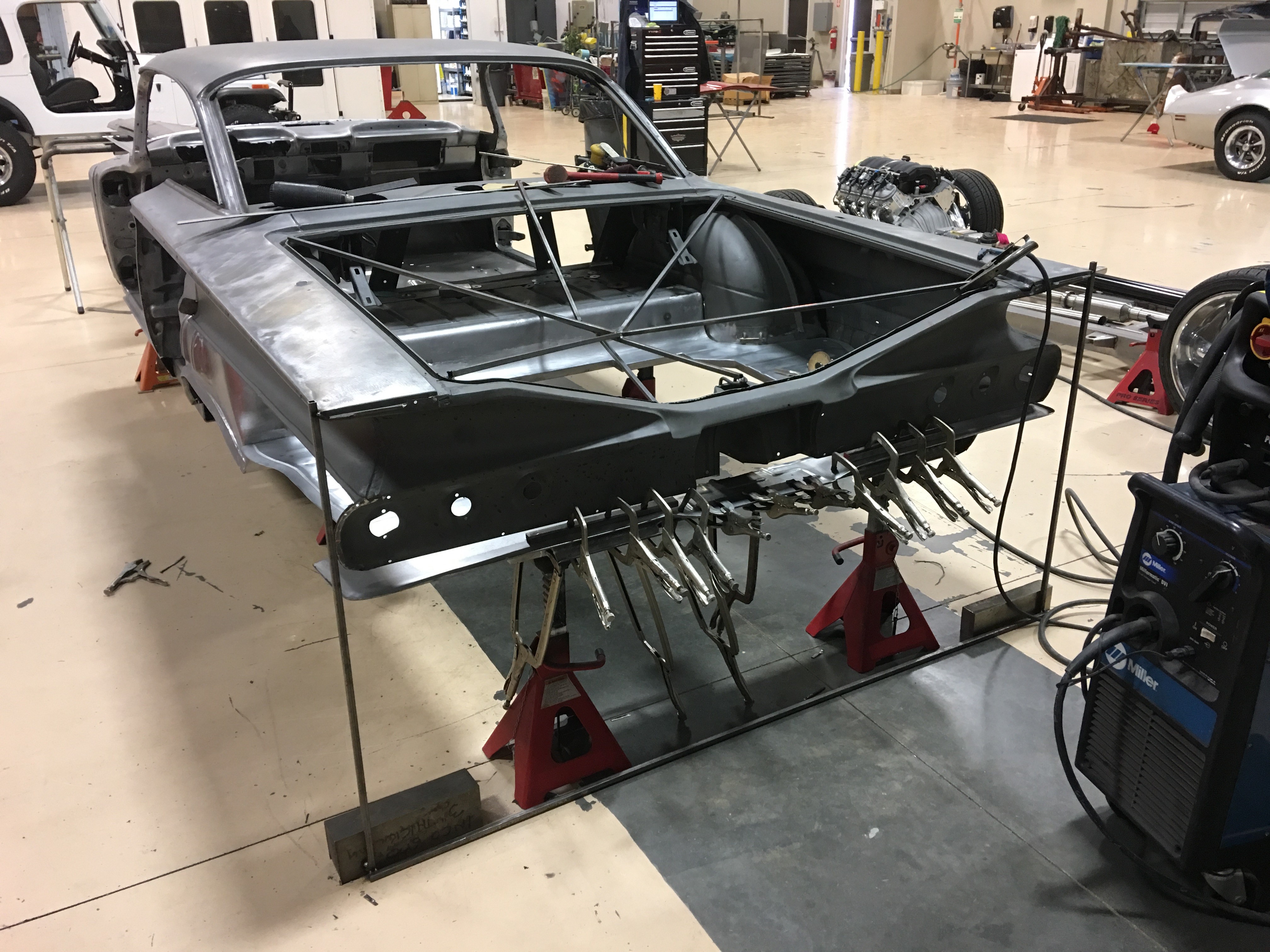 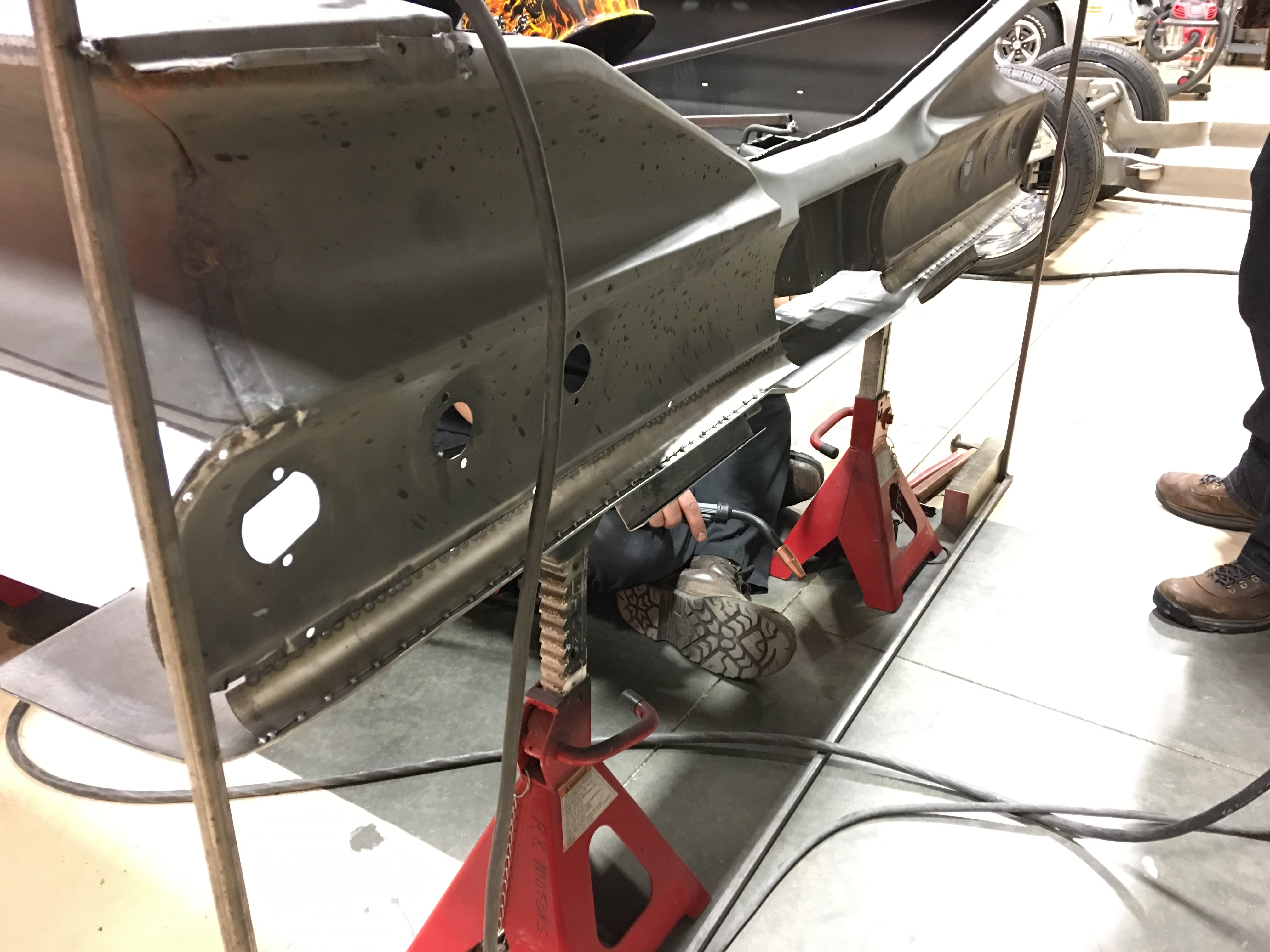 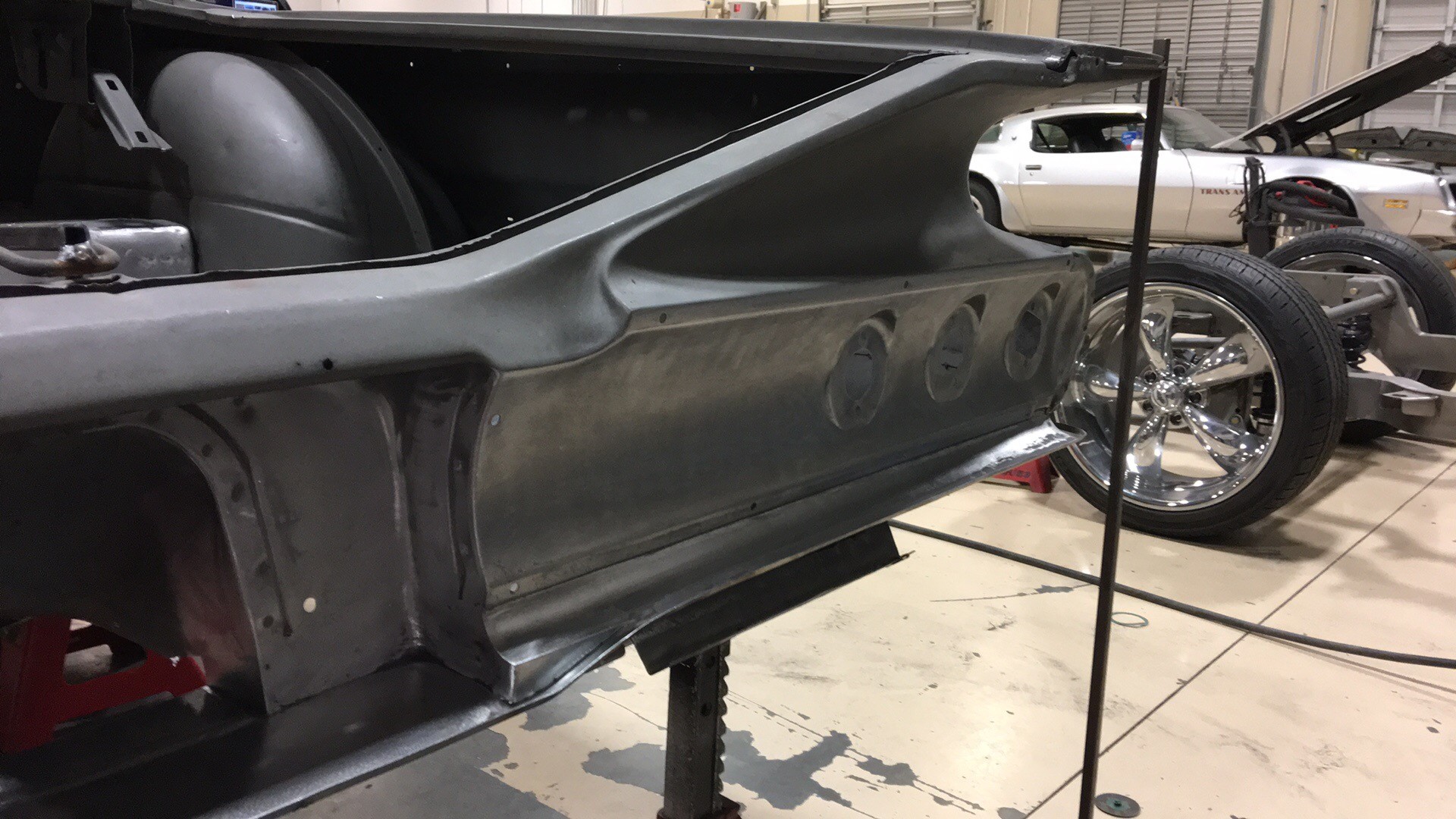 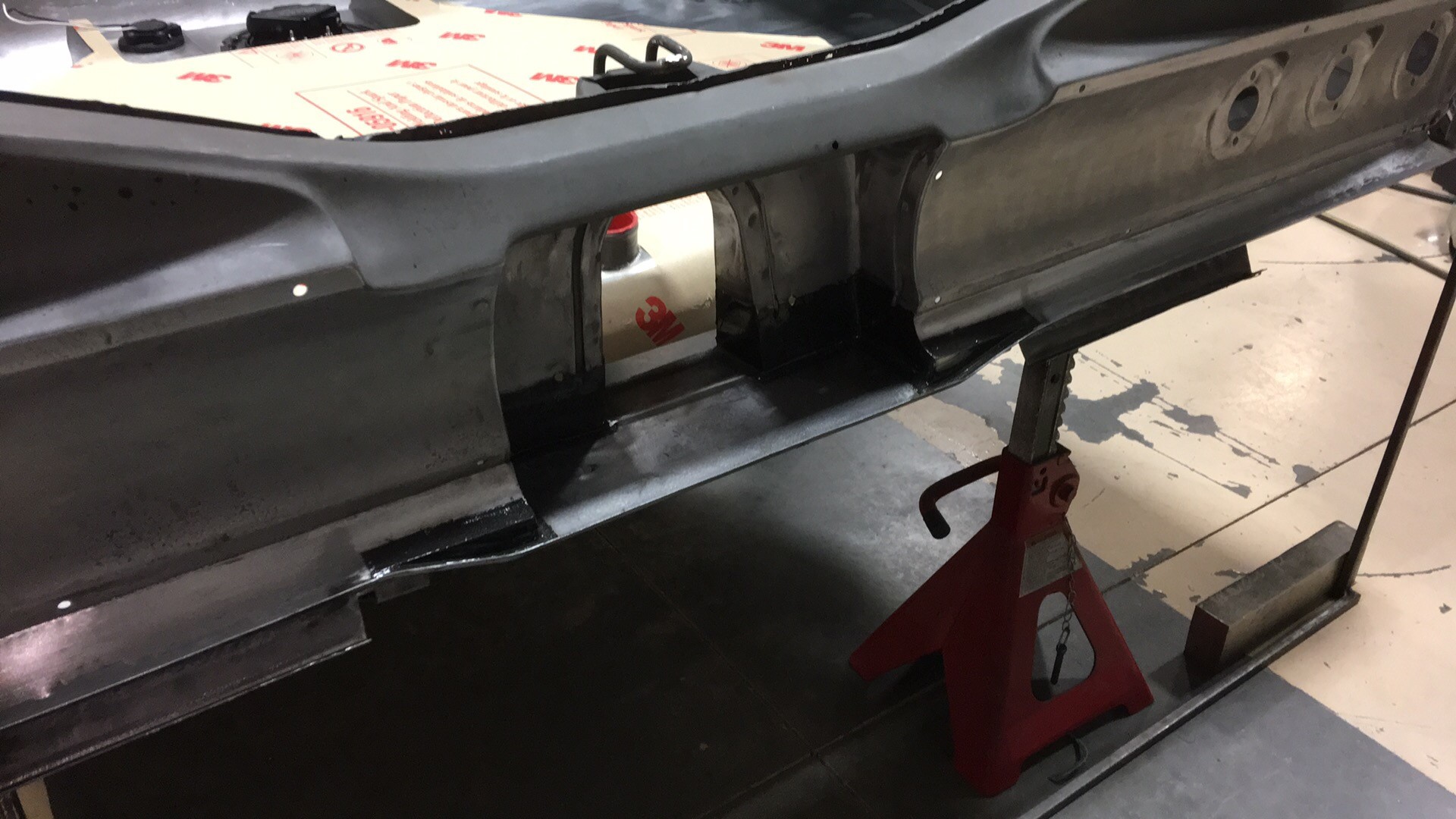 Now that our trunk floor is solid, we can fabricate new drops, fabricate new weatherstrip channels, repair the transition panel and finally finish up the quarters. Join us next time as we progress to the Body phase!