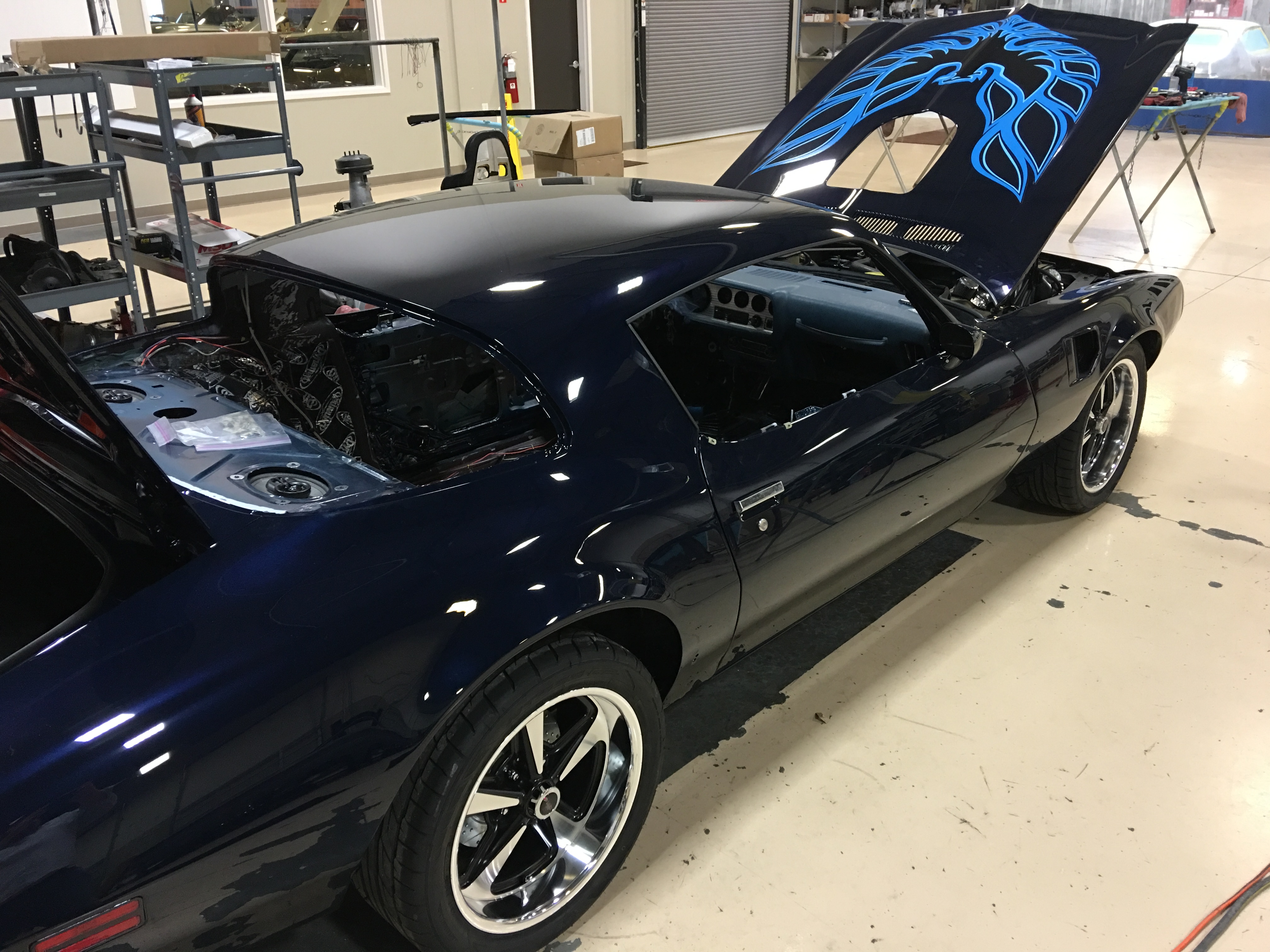 The key to creating an impressive pro-tourer is a solid foundation. With the creativity currently inhabiting the classic car hobby, it’s becoming pretty easy to find quality components to shore up any build. That said, all the engineering and technology in the world can’t account for the many discrepancies or alterations inherent in a one-off project. And, after all is said and done, every restoration is a one-off project.

That’s where experience and expertise come in. Before we rolled our 1975 Pontiac Trans Am build in to the paint booth, we installed a full Detroit Speed chassis. While that chassis is sure to be a vast improvement over the car’s factory bones, it also posed a few fabrication challenges. The first occurred during installation of the QUADRALink rear-clip, when we learned that F2 Camaro floorpans are slightly different than F2 Firebird floorpans. Naturally, our preferred set-up was geared toward Camaro owners, since, thus far, that’s the majority of Detroit Speed’s customers. So we had to do a little more cutting and welding to make everything work. No big deal, right? Well, consider it a warm up for the car’s hydroformed front-clip. Since Detroit Speed is a company which, despite its huge success, still actively competes in autocross events around the country, their main focus is performance. With that in mind, it should come as no surprise that their hydroformed front-clip effectively relocates the car’s engine a full two inches in the name of better balance and weight distribution. We weren’t sure if anyone had ever combined a Pontiac 400 with a Detroit Speed front-clip, but we were pretty confident in our ability to pull it off. After all, we used this same set up to shoehorn a 527 cubic inch Kaase Boss Nine in to a 1967 Mustang, publicly known as RK527, for the 2014 Hot Rod Power Tour. With the 400 mounted, we had to relocate the transmission crossmember and shorten the driveshaft by, you guessed it, two inches. Naturally, the stainless Hooker Competition headers we sourced would have to be cut, custom-welded and sent out to Airborn Coatings for some fresh JetCoat. We had to source a smaller wiper motor from the folks at New Port Engineering. And, in order to preserve the car’s Shaker Hood, we had to substantially modify its scoop. 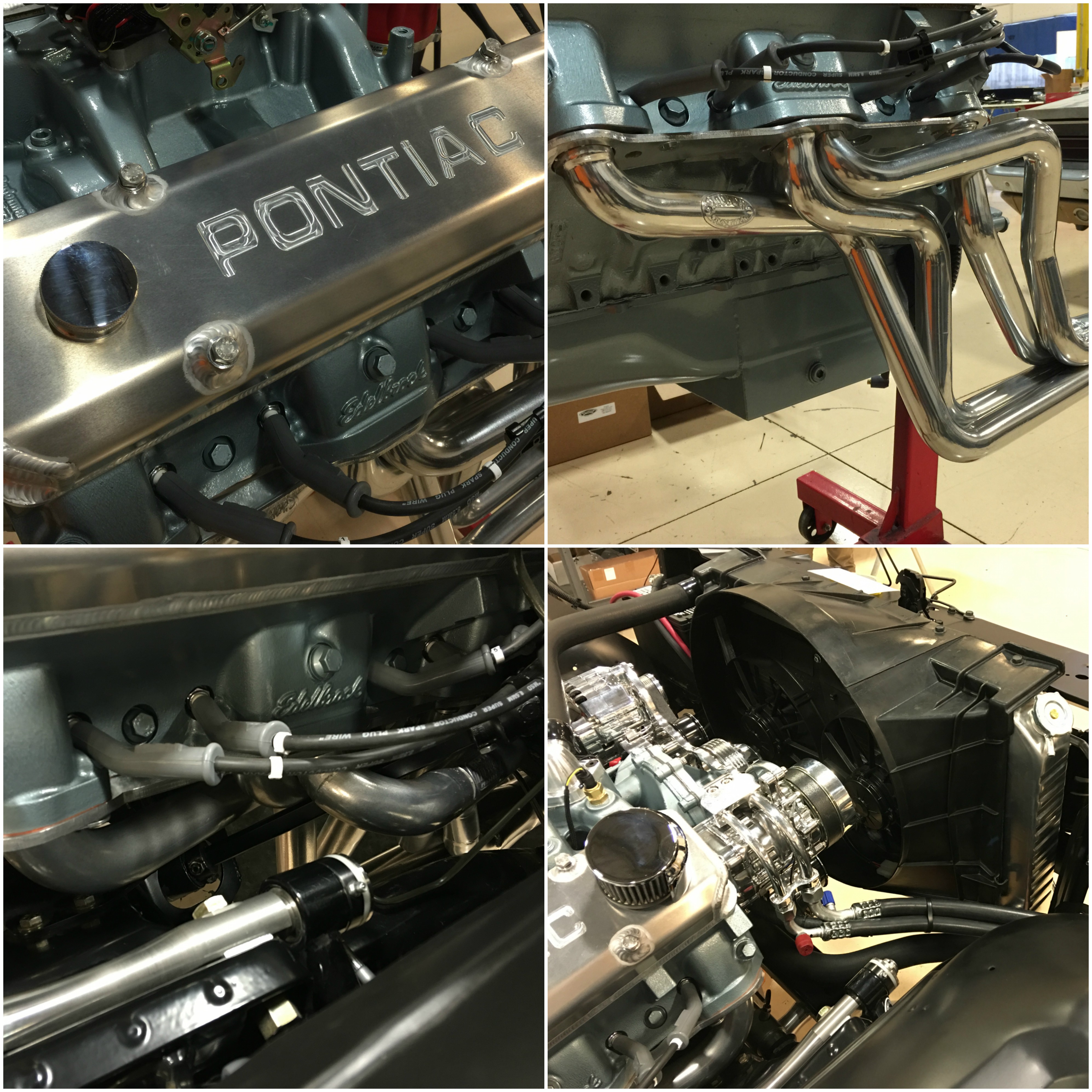 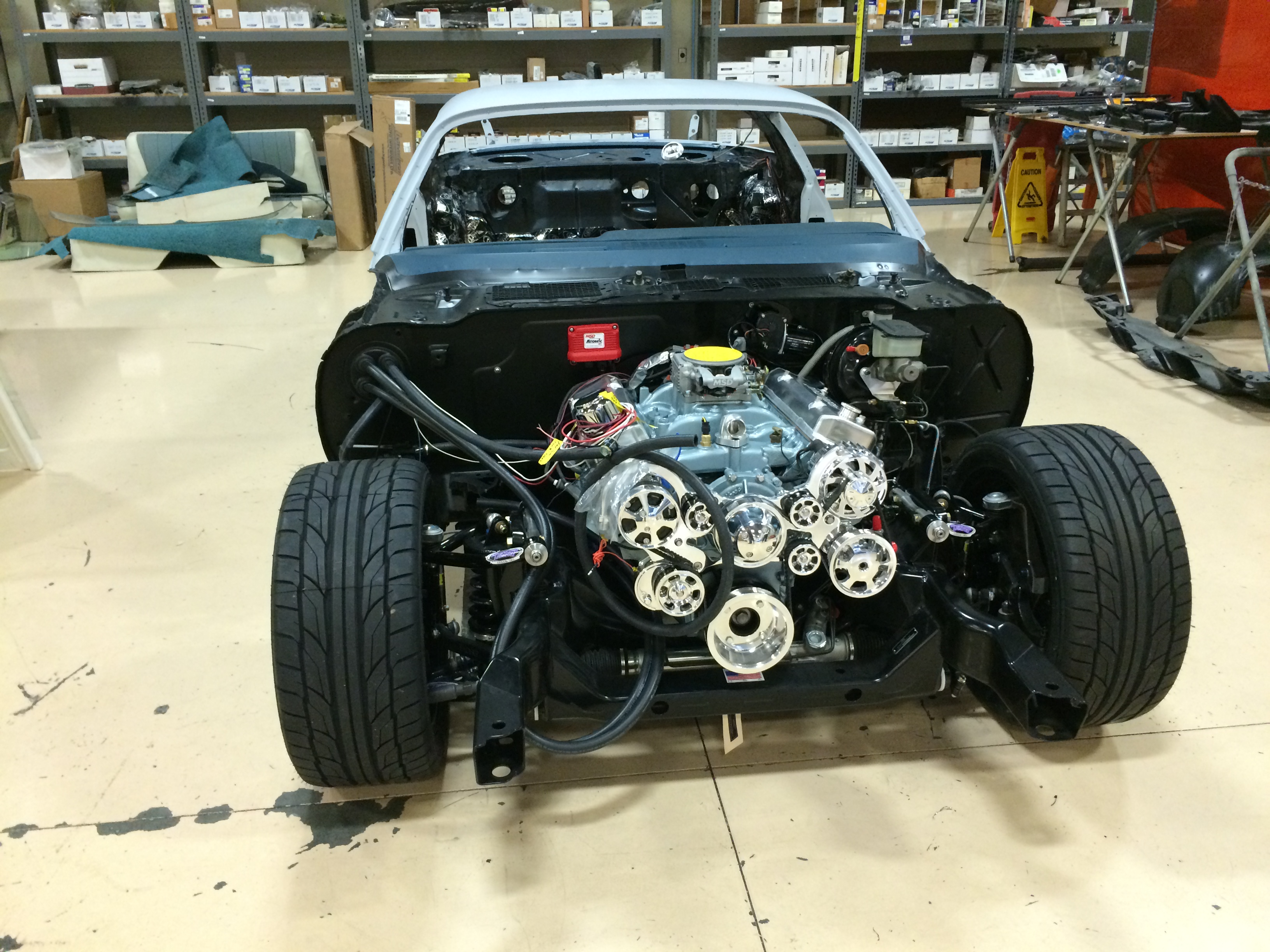 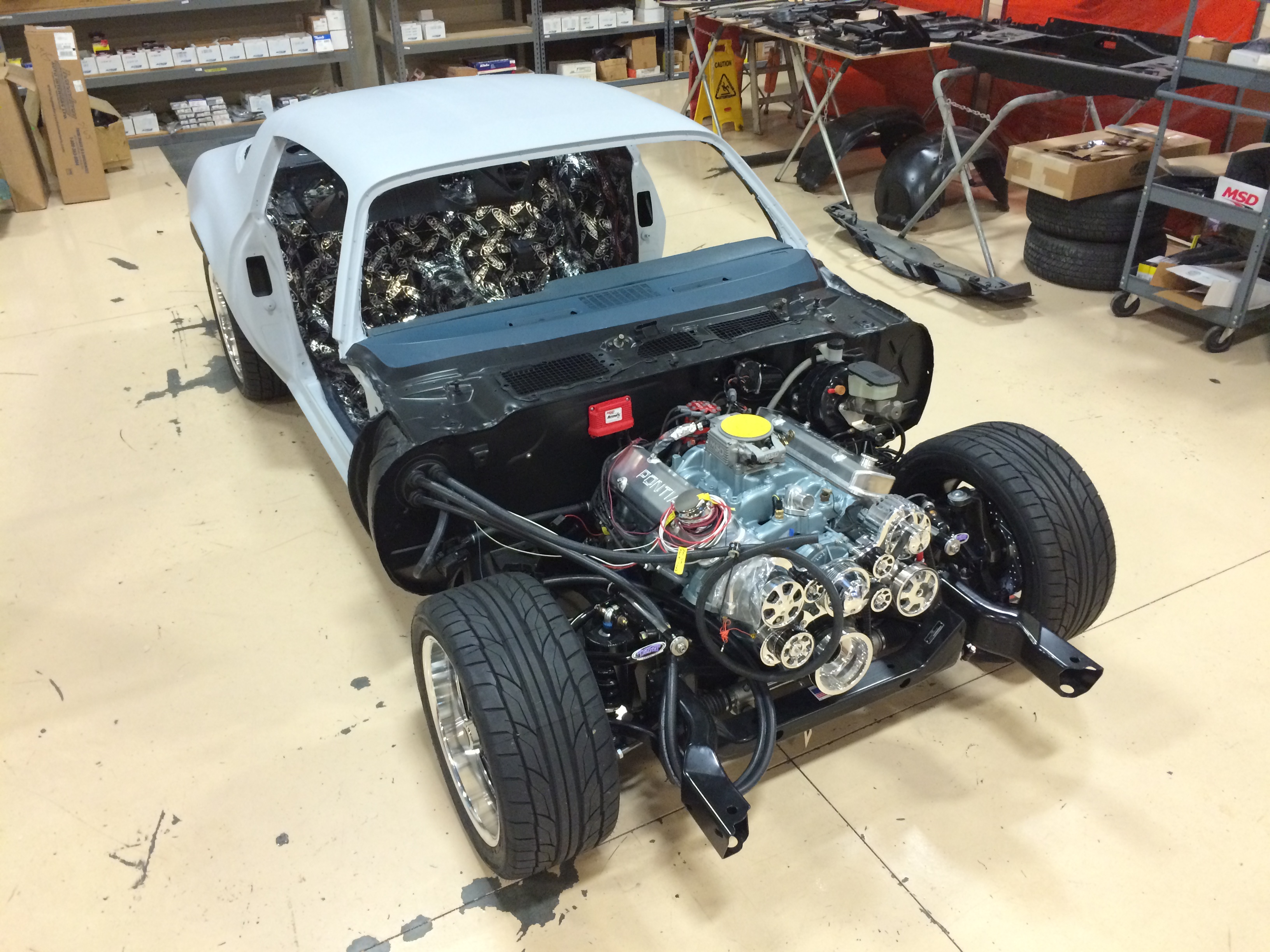 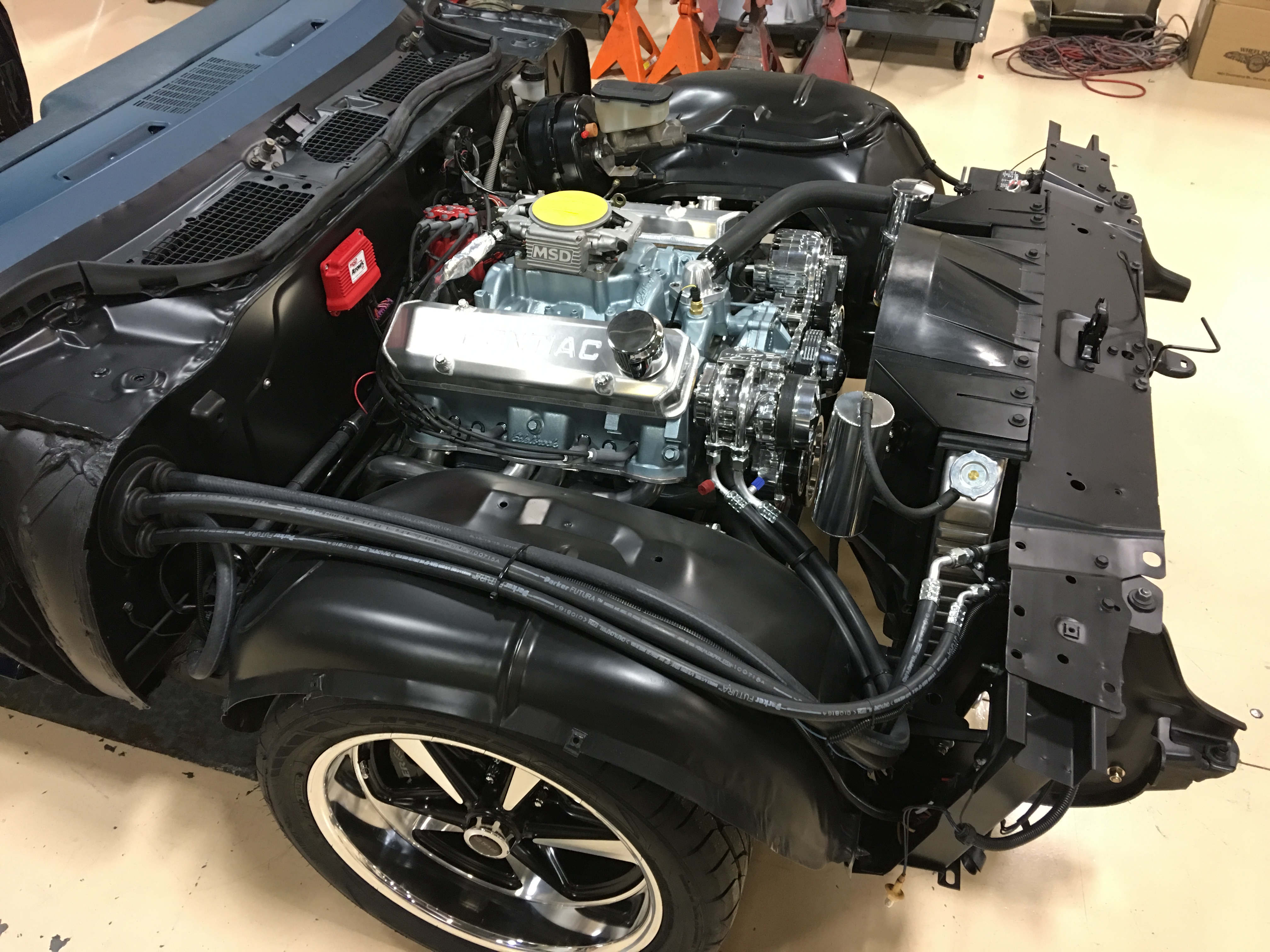 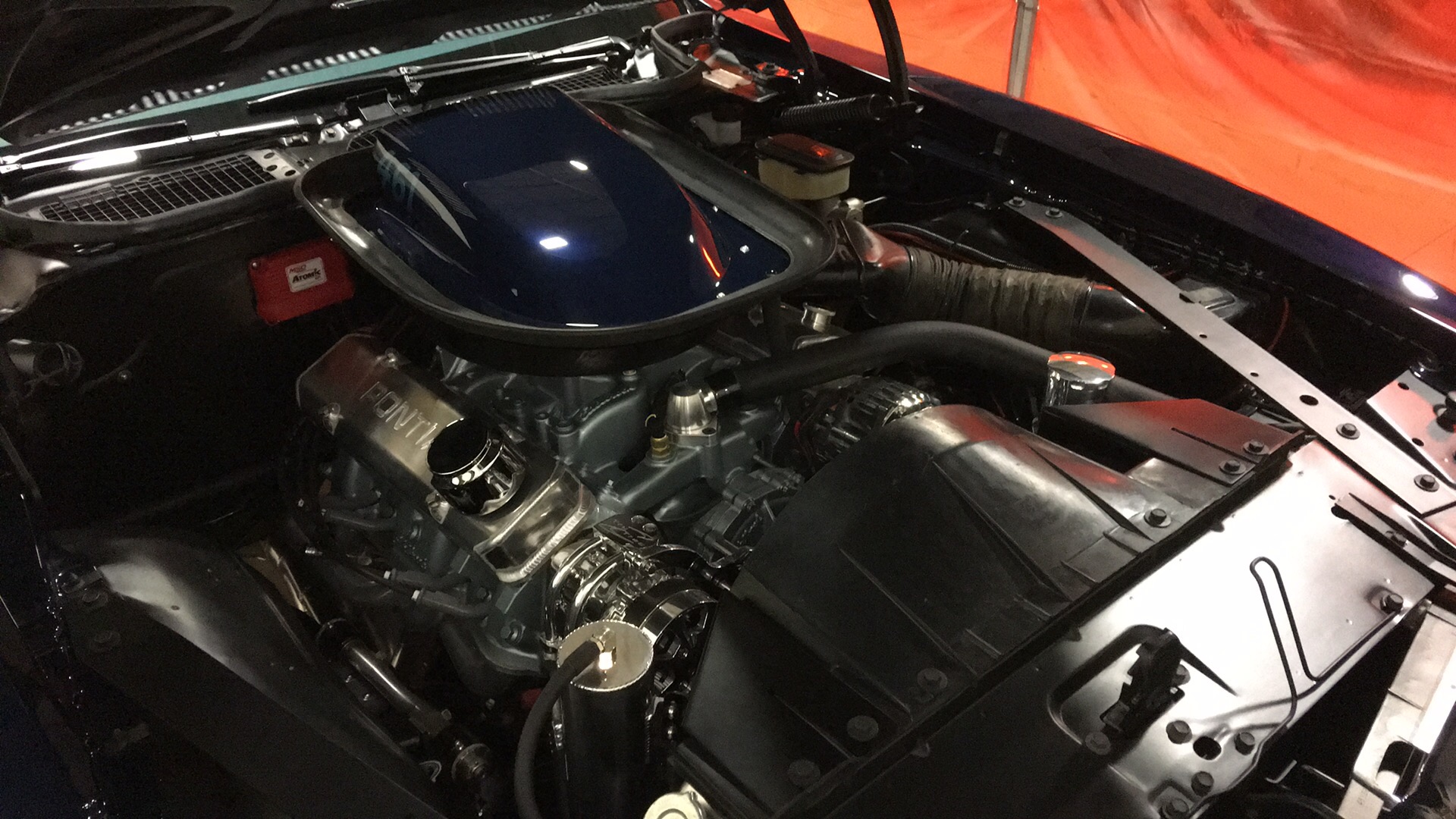 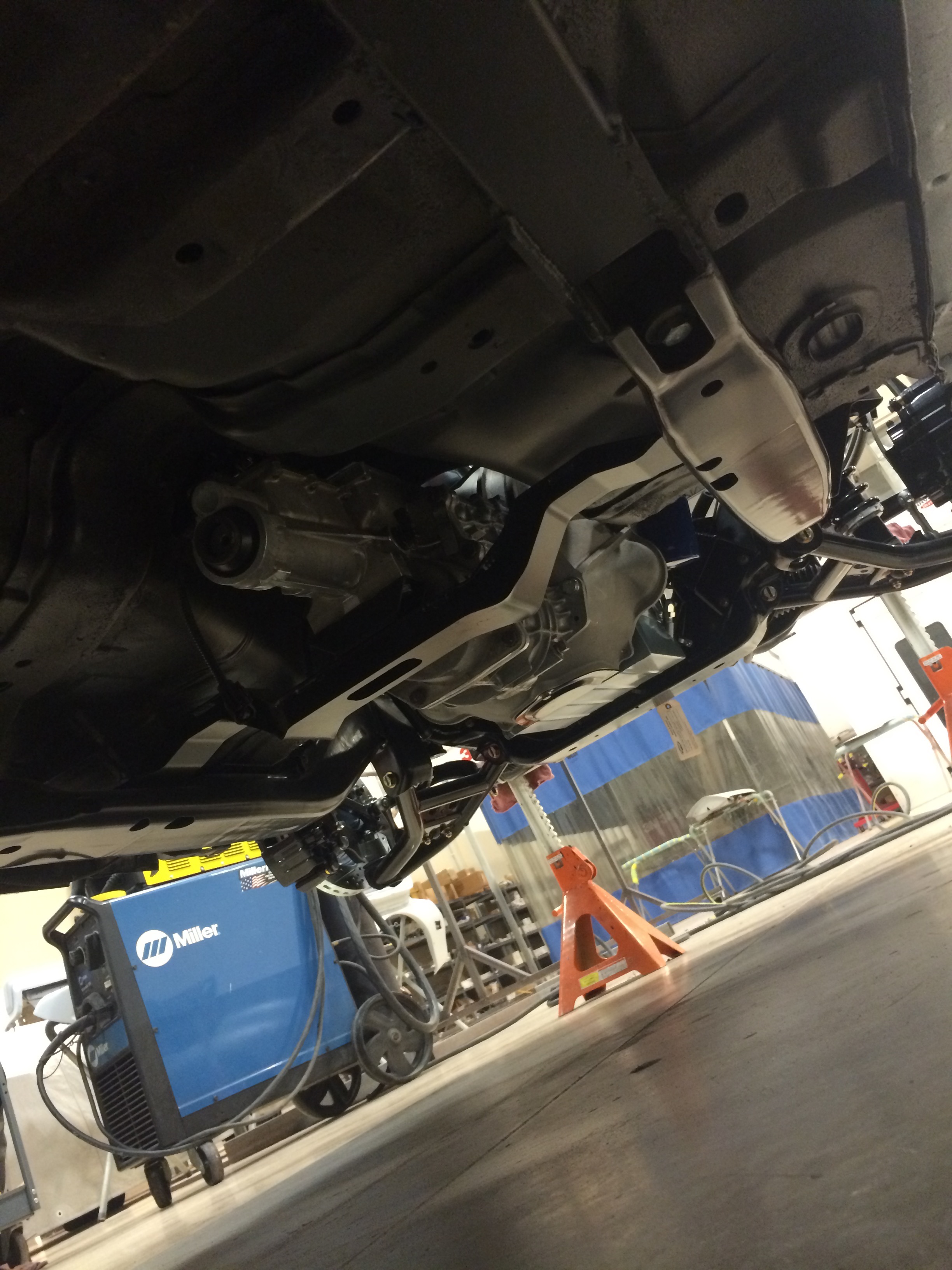 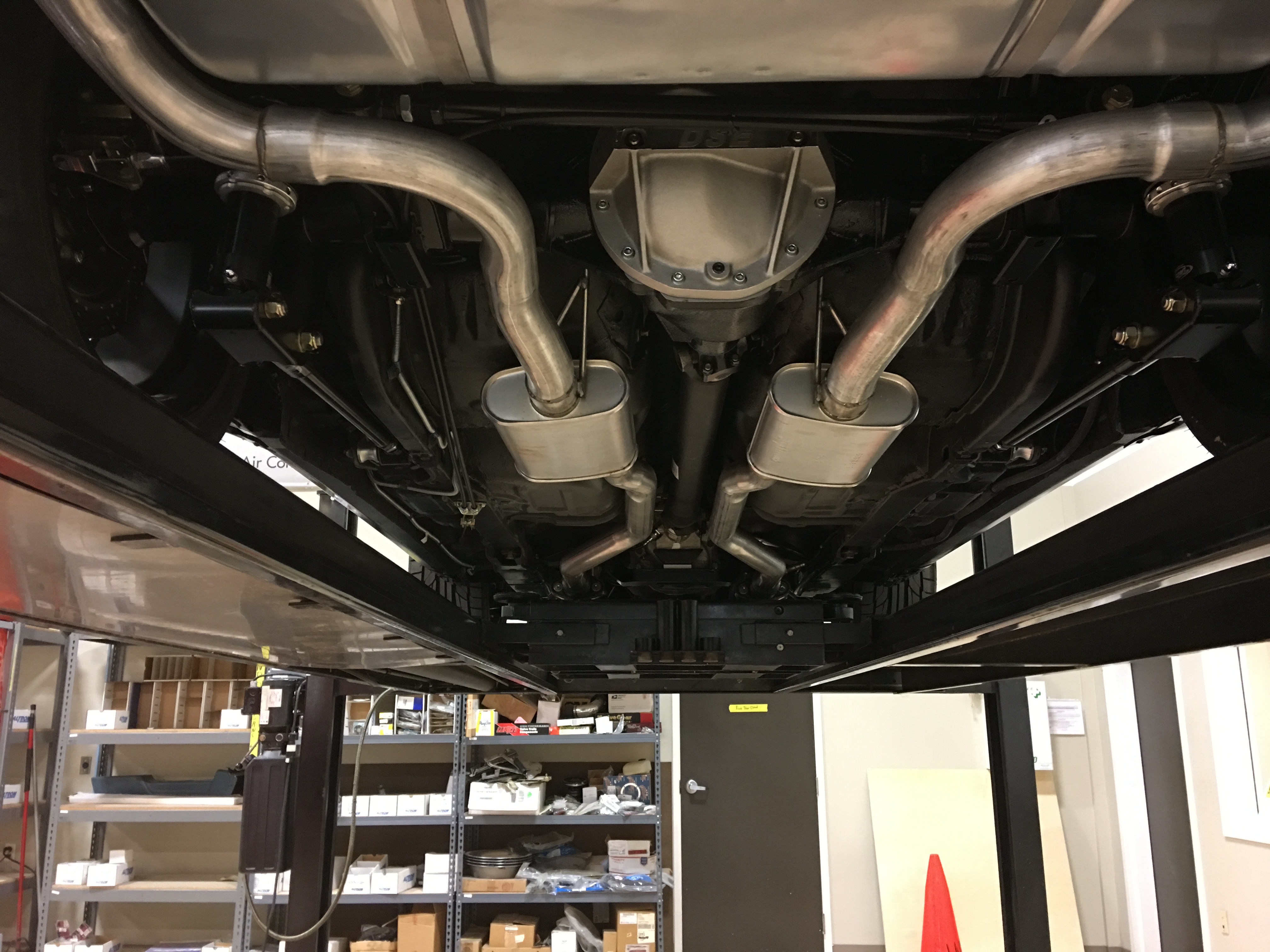 Despite the excellence of GM’s modern small blocks, many old school Pontiac fans lament the day when Pontiac started using GM corporate engines. With that in mind, we felt a bit blasphemous substituting an LS mill for a perfectly good, numbers-matching Pontiac V8. So we decided to ship the engine, along with a fresh Butler Performance 461 stroker kit, to the folks at Mooresville, North Carolina’s Gibbons Motorsports. After the block was fully honed, Gibbons supplemented Butler’s forged and polished crank, H-beam rods, and flat-top pistons with a hot Lunati hydraulic roller cam. Surfaced Edelbrock heads were fitted with Ferrea Racing valves, custom chromoly pushrods and Lunati hydraulic lifters. Spark was sequenced through a series of MSD components, with a red coil and distributor complementing loomed plug wires. Modern air conditioning was a must, so we sourced a polished Billet Specialties Tru Trac system, which spins a polished alternator next to an aluminum Edelbrock water pump. Likewise, reliability and ease of use was one of the owner’s primary concerns, so we tossed the carburetor in favor of MSD Atomic throttle body fuel injection, which feeds an Edelbrock Performer Pontiac intake. Two 12-inch fans and a lightweight DeWitts radiator ensure everything stays cool. ARP bolts ensure everything stays together. And when the engine was complete, Gibbons dyno-tuned it to a solid 479 horsepower and 594 lb./ft. of torque. 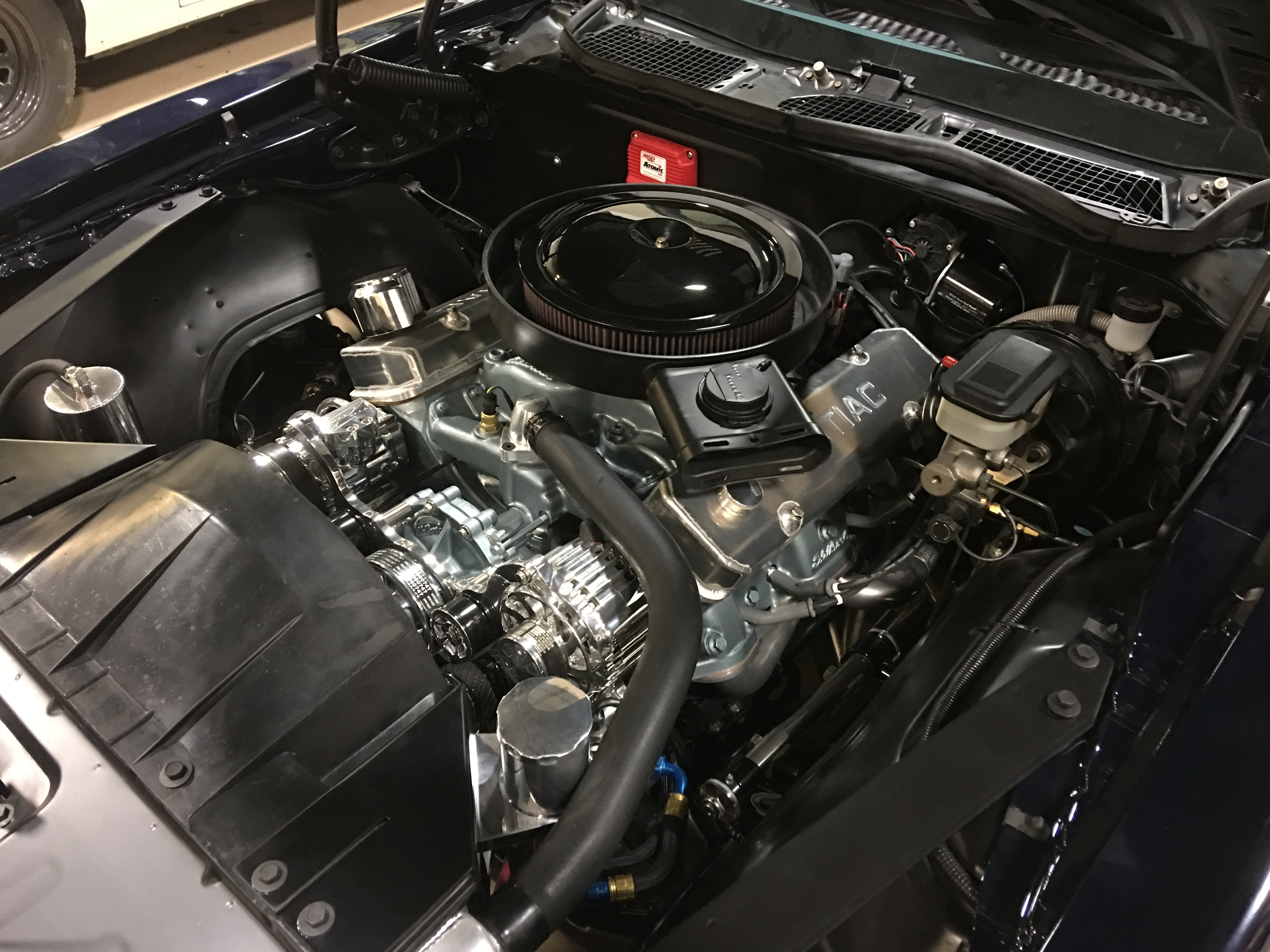 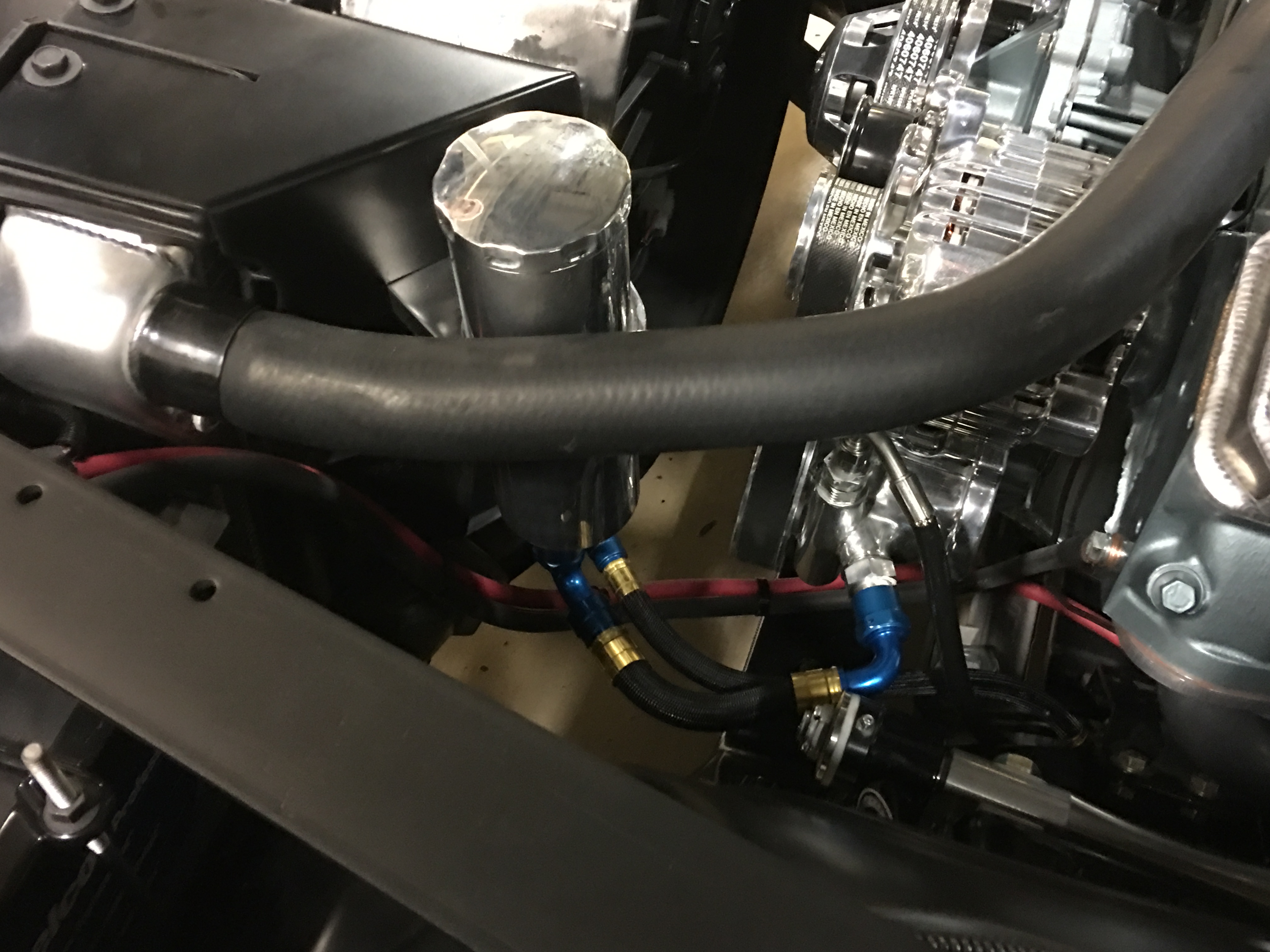 With the mill built, decked in Pontiac Light Metallic Blue paint and detailed with fabricated “PONTIAC” valve covers, we hooked it up a tough Tremec TKO600 5-speed. Overdrive is always a welcome addition on the highway, and, after we machined some custom reinforcements, our Hurst Competition Plus shifter fell in exactly the right place. Once that shifter was bolted down, the cockpit was sealed in Dynamat, floored with fresh carpet and capped with an Ames headliner. Tired factory upholstery was exchanged for new Legendary vinyl. A new Ames Formula Wheel and fresh Ames console components joined re-dyed paneling to preserve the car’s rare interior tone. Plumbing for the Vintage Air climate system was piped to the right of an integrated Detroit Speed Firewall Fill Plate. And since the owner wanted a nice sound system that wasn’t overbearing, we hooked an MP3-compatible, Bluetooth-capable Antique Automobile Radio to a 200-watt JL Audio amp that powers a Retrosound dash speaker and seamless JL Audio 6x9s. 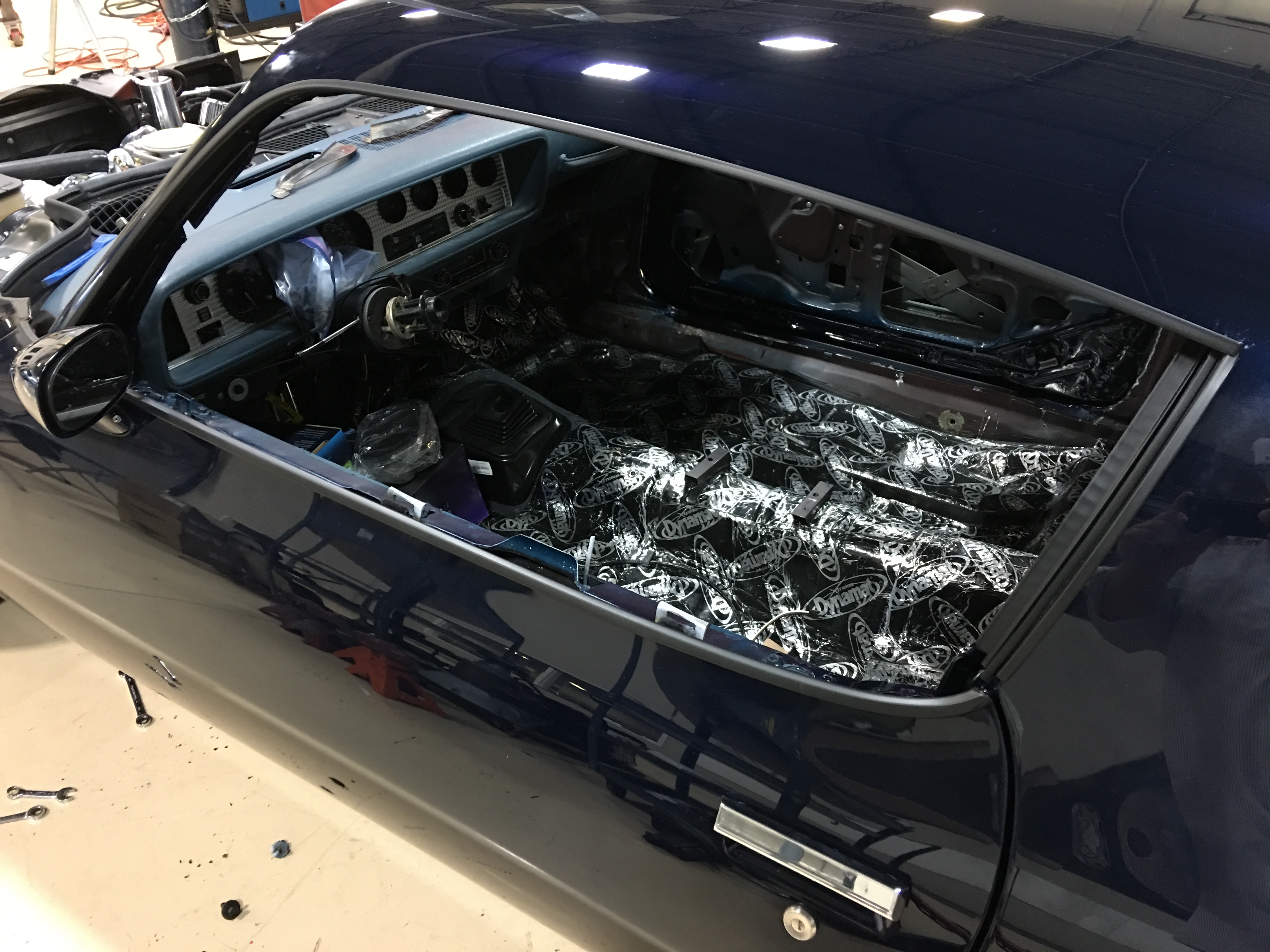 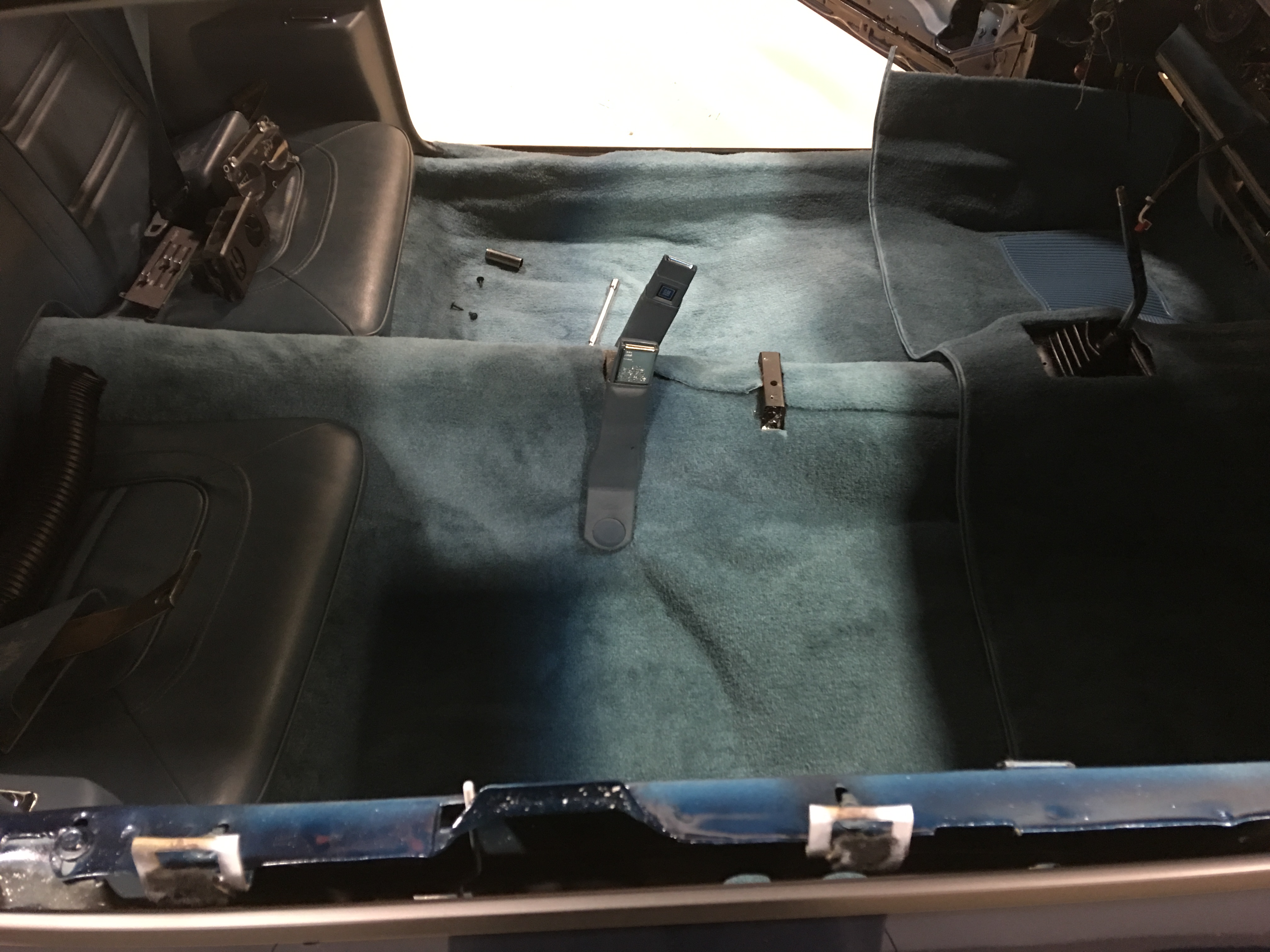 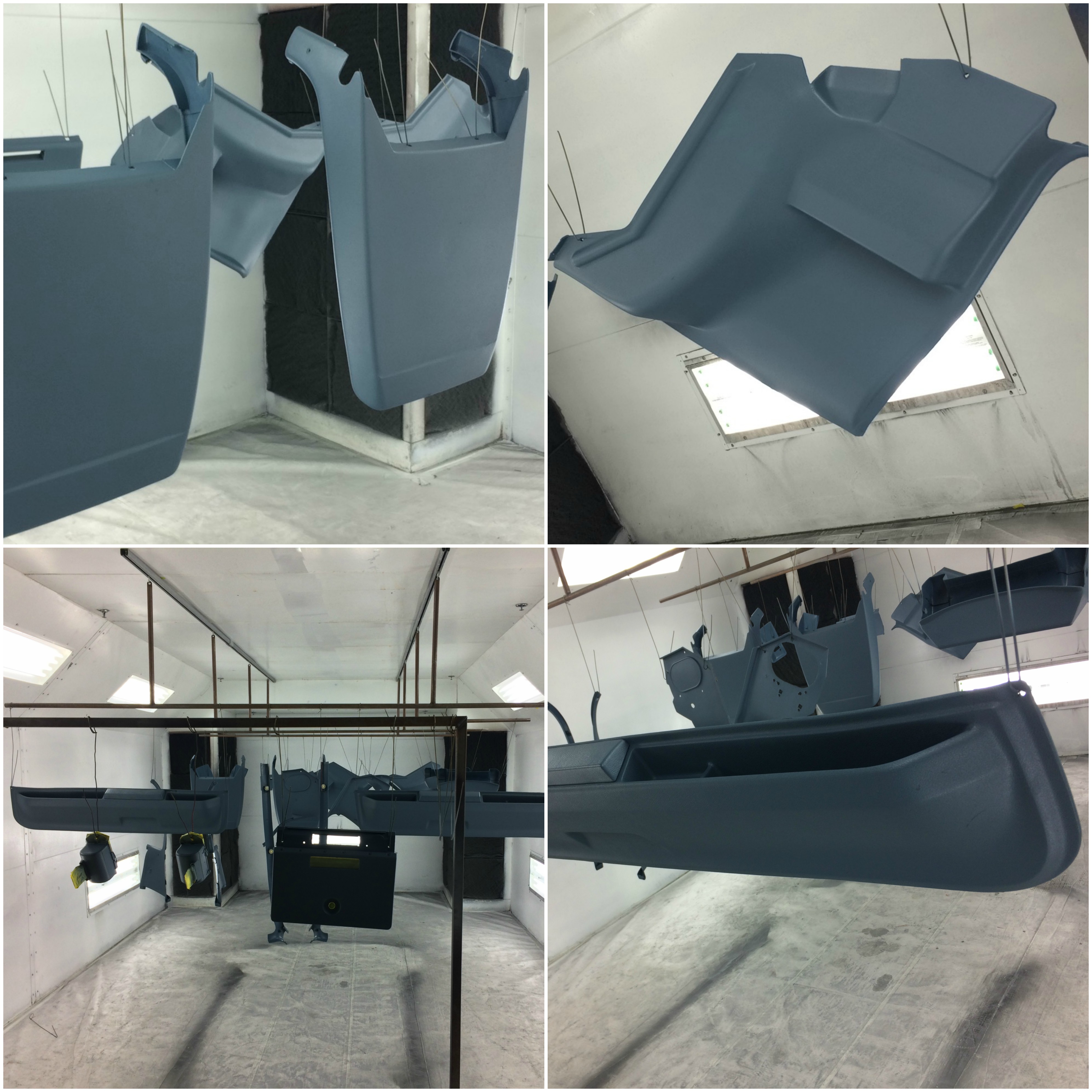 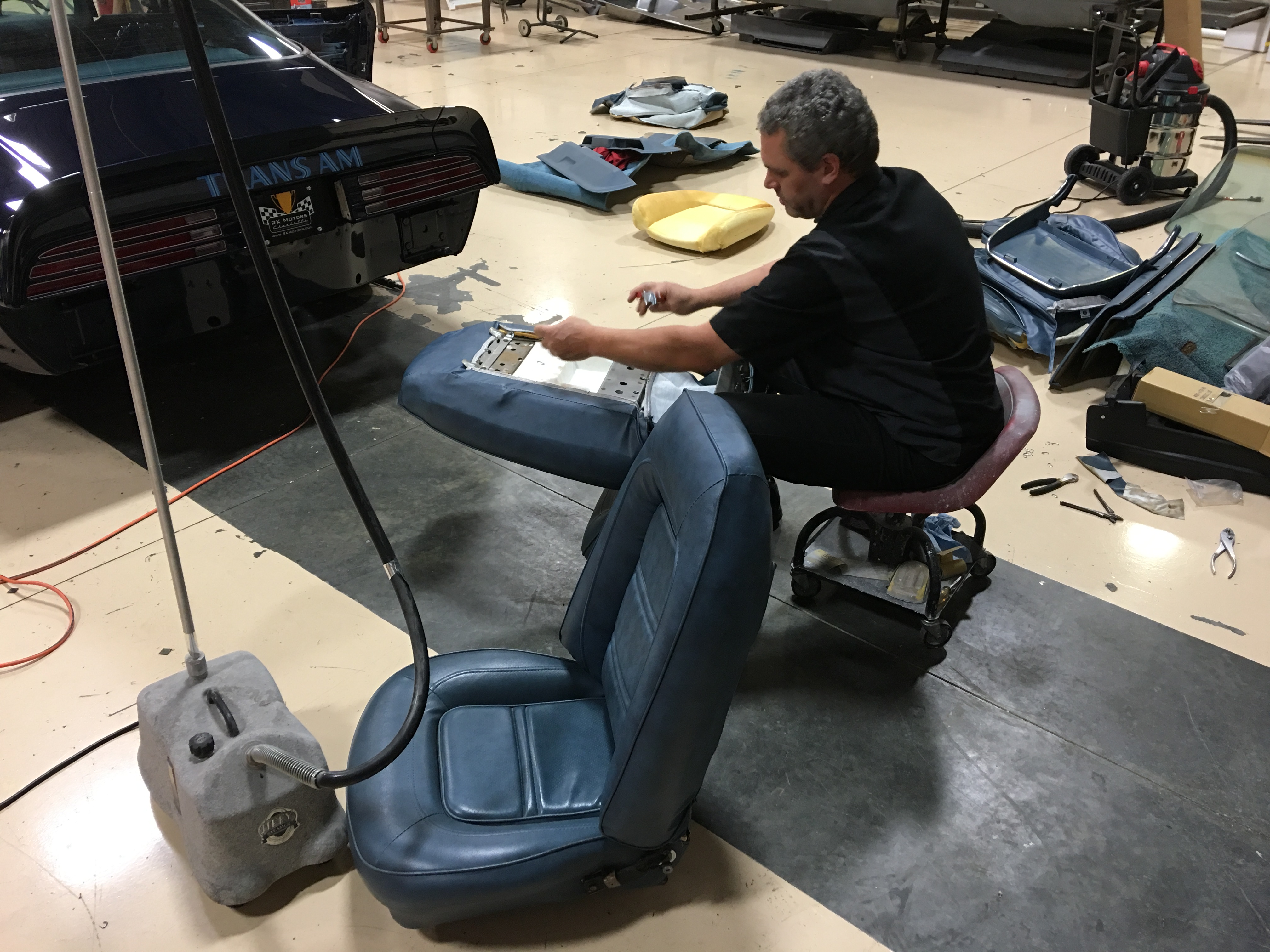 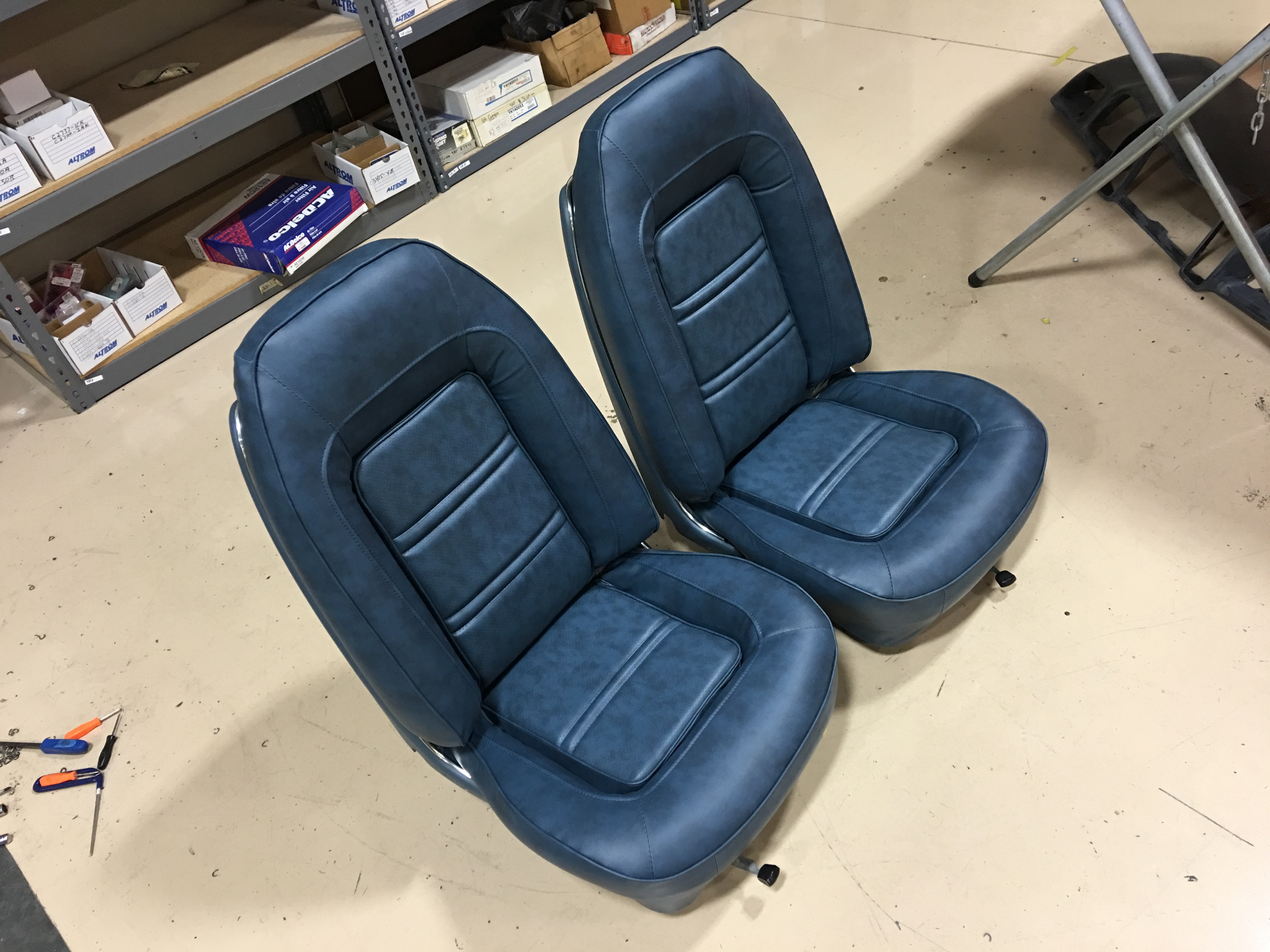 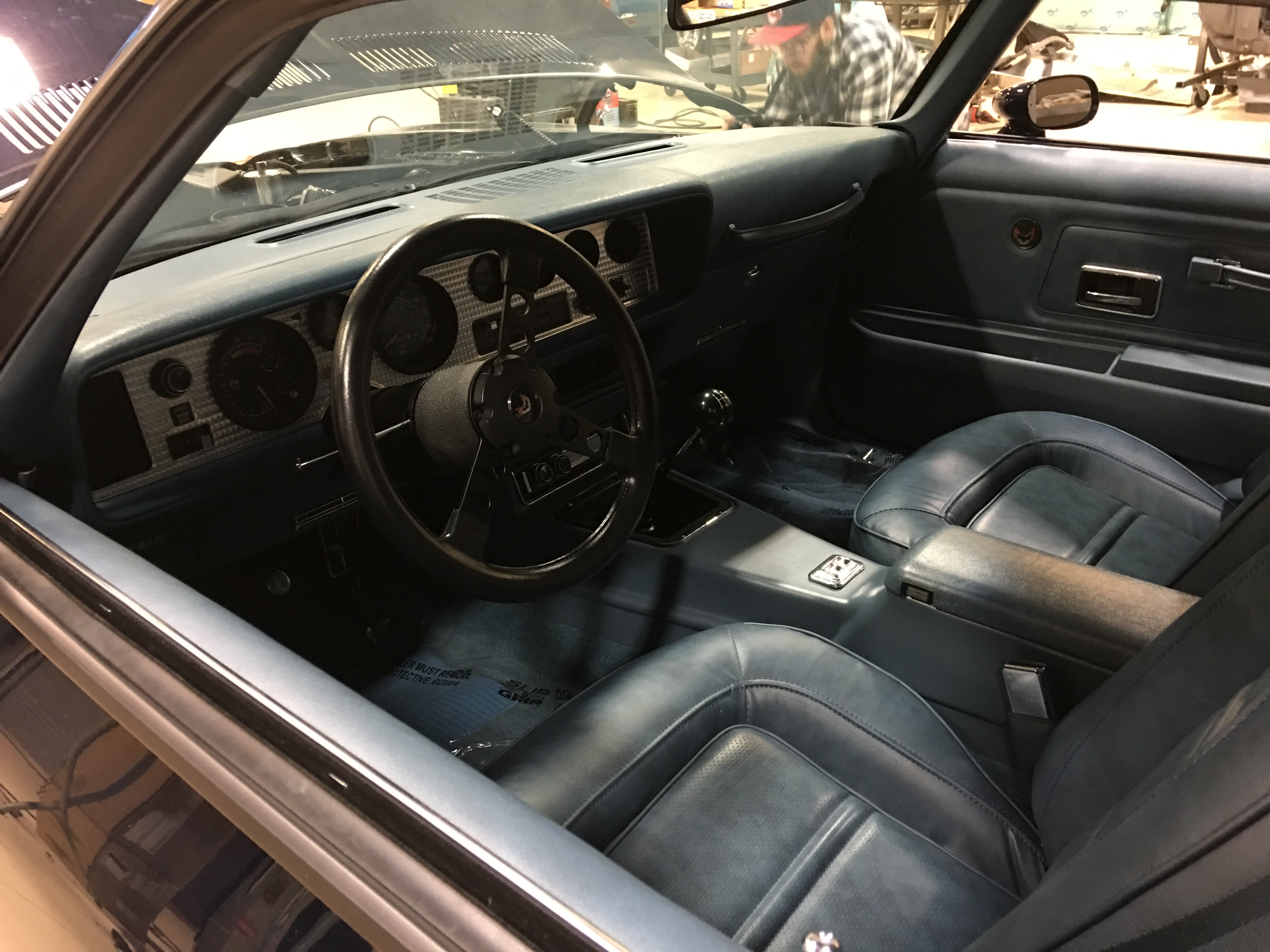 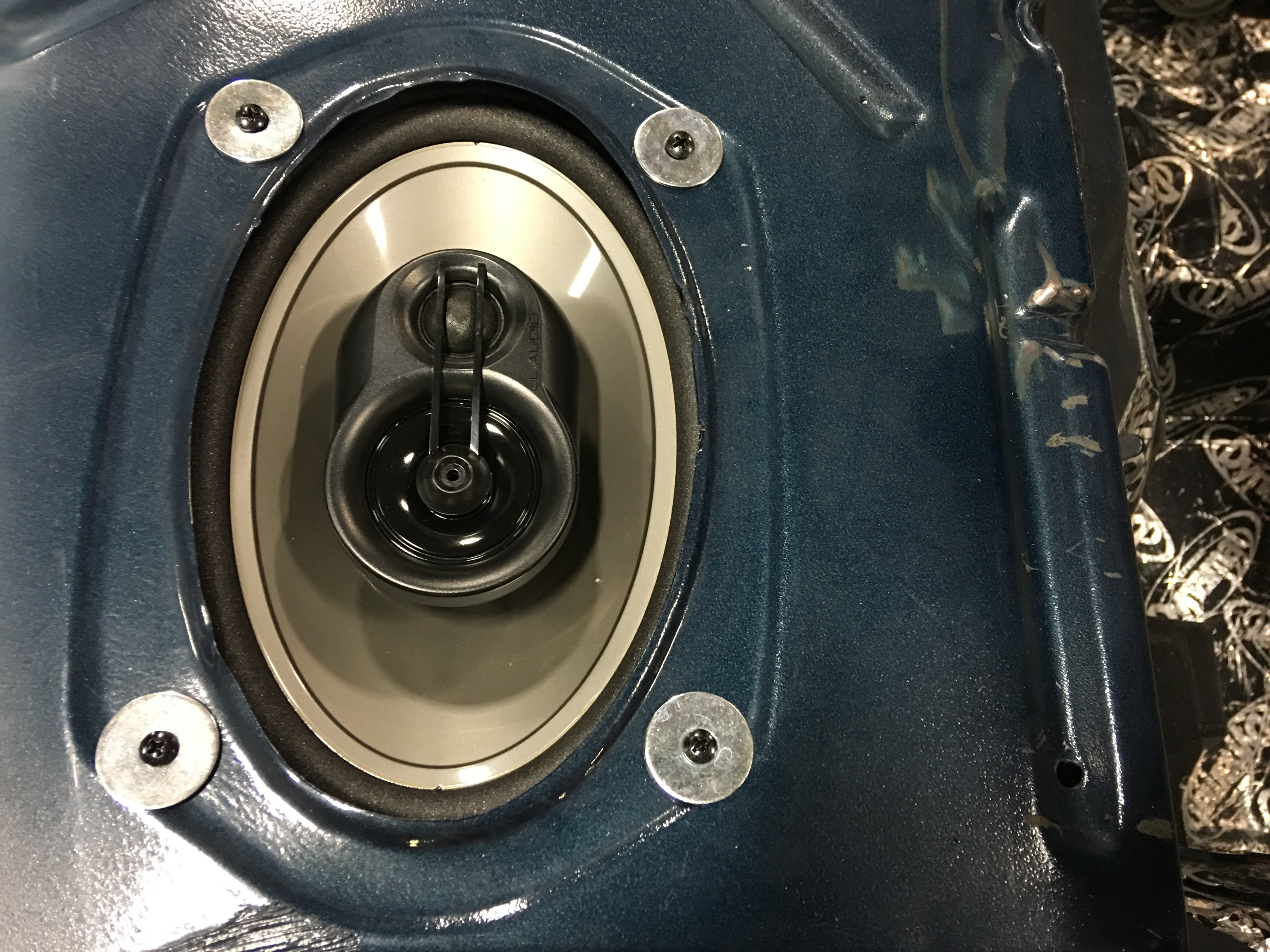 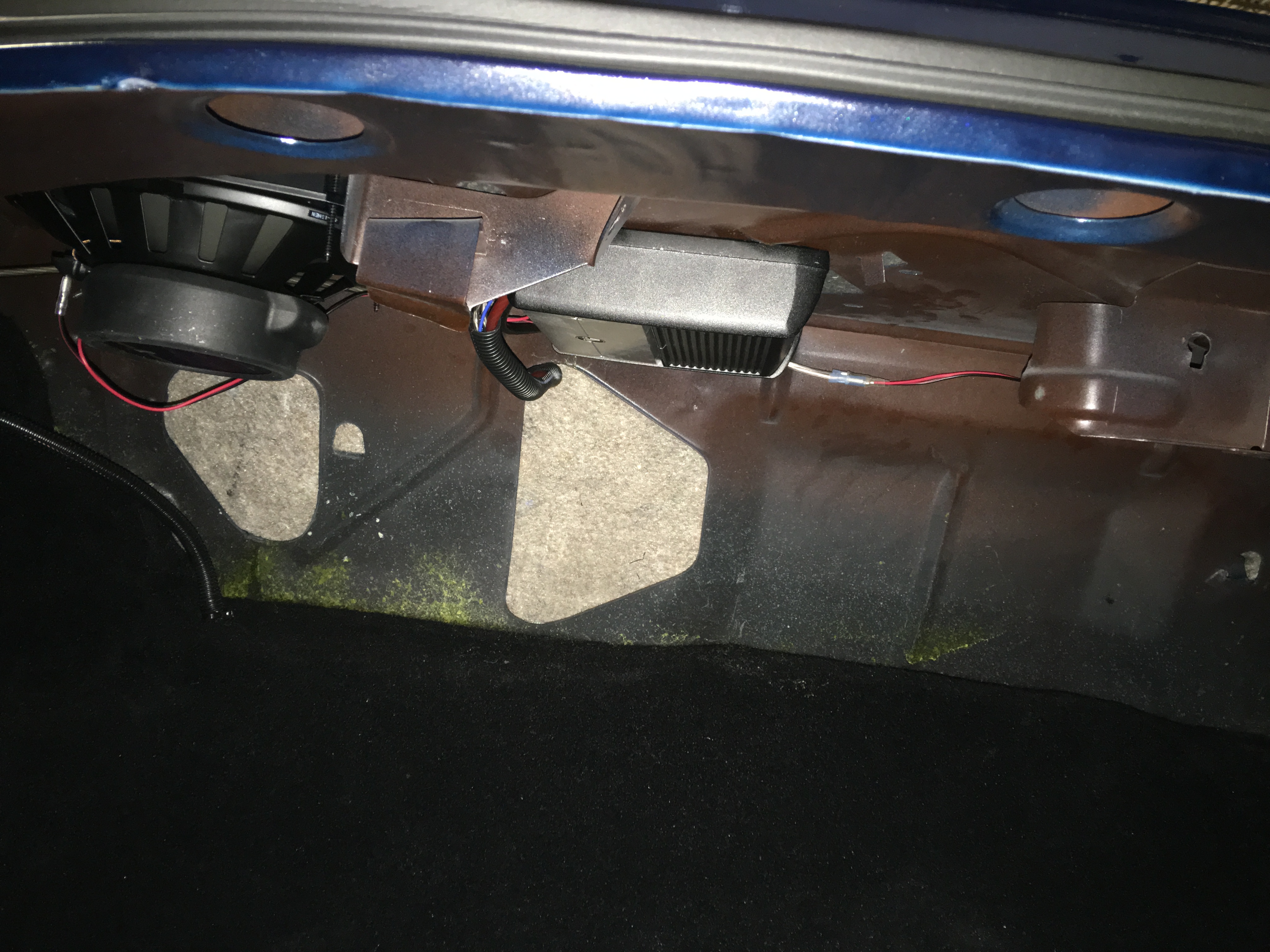 With this Pontiac mostly assembled and nearing drivability, it was time to add a few finishing touches. Because we take power very seriously, we take braking very seriously. This Trans Am should have no problem stopping thanks to an upgraded booster, which clamps giant Baer calipers around 12 and 13-inch drilled and slotted rotors. The car’s custom exhaust system includes an X-pipe crossover and mean Dynomax mufflers. Fuel is sourced from a Tanks Inc. fuel tank. And, in keeping with our theme of creating a more precise version of an already cool car, we found a sweet set of 18-inch Rally II replicas, which fill out aggressive Nitto 555 tires. 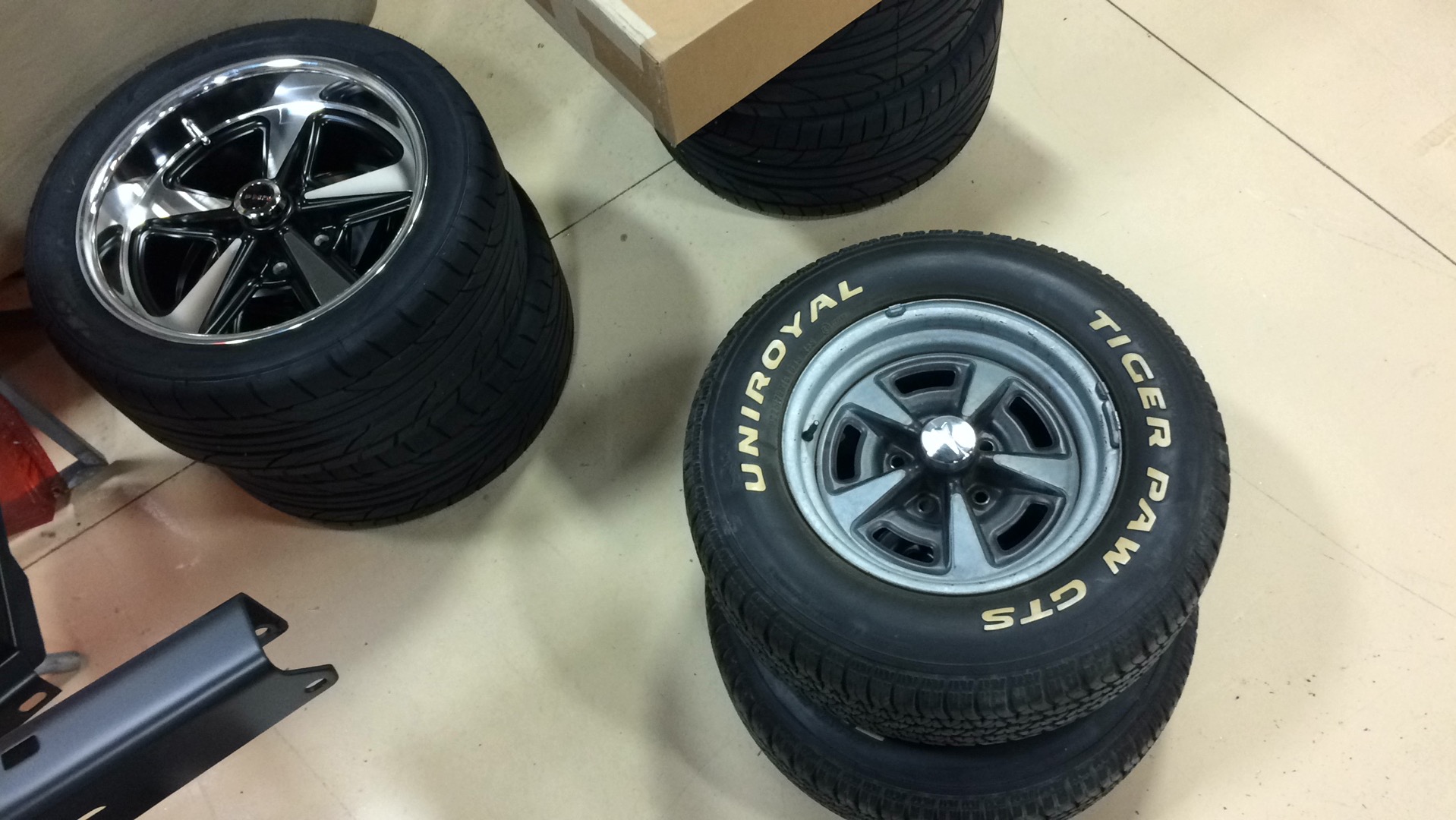 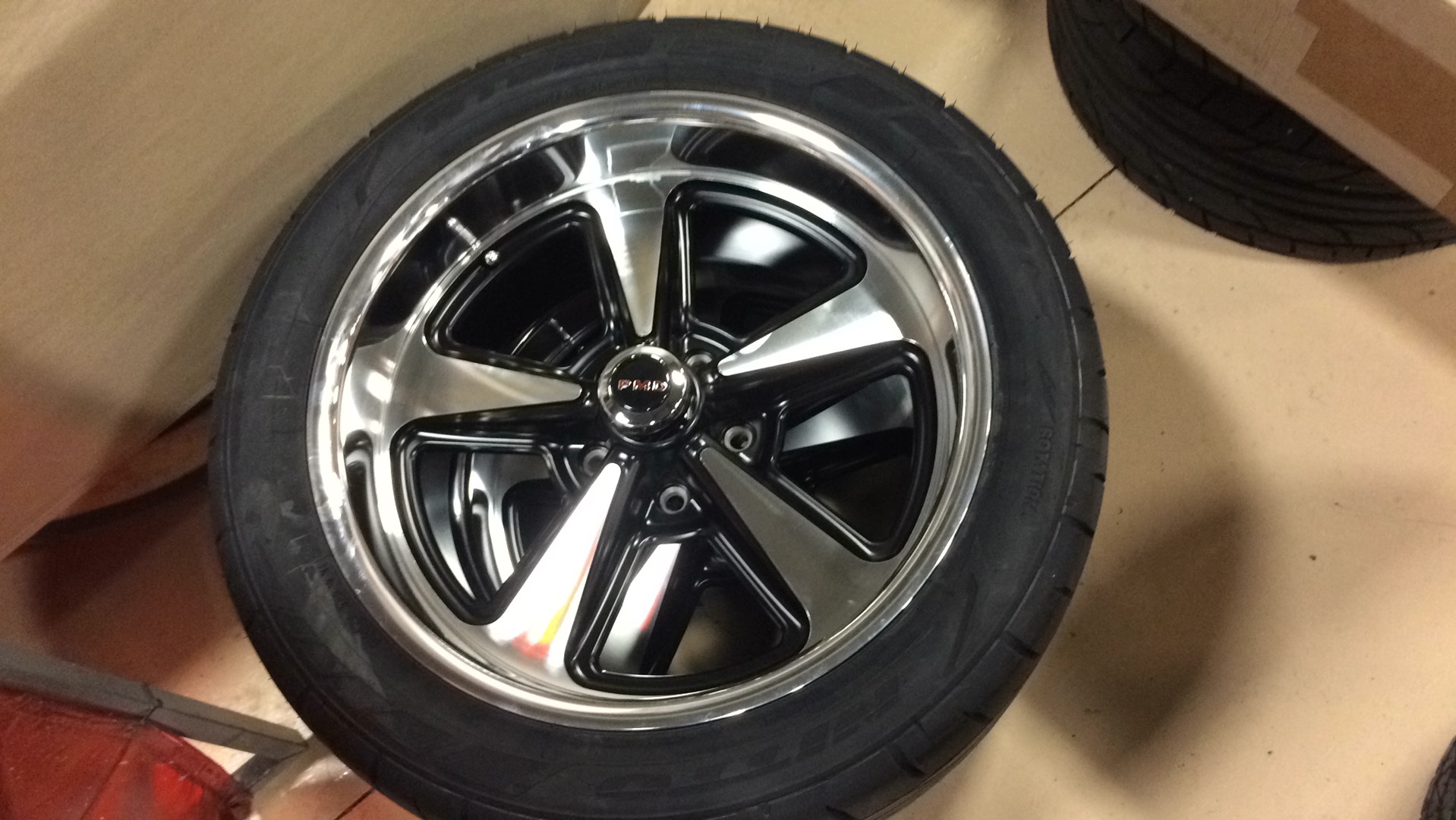 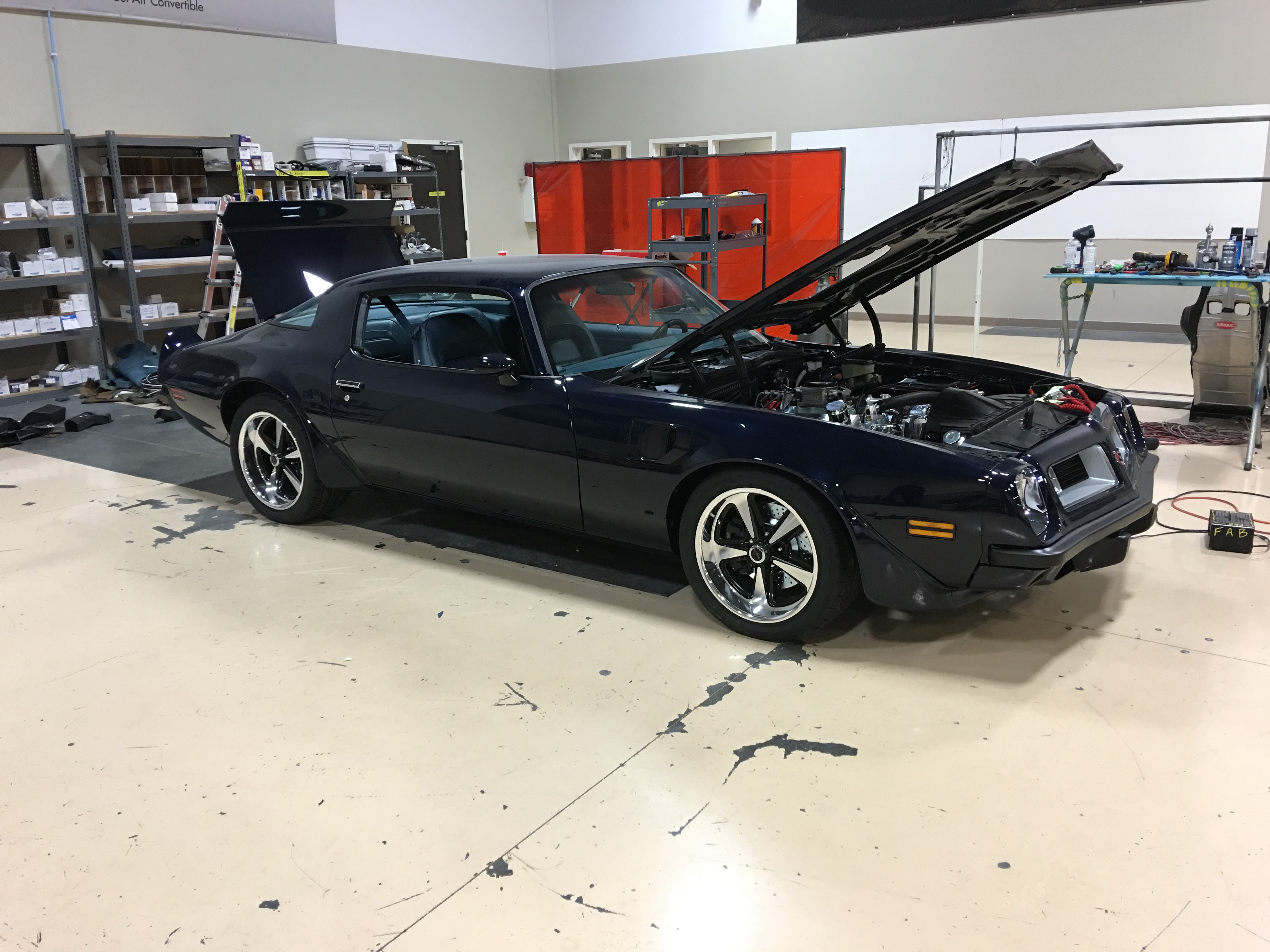 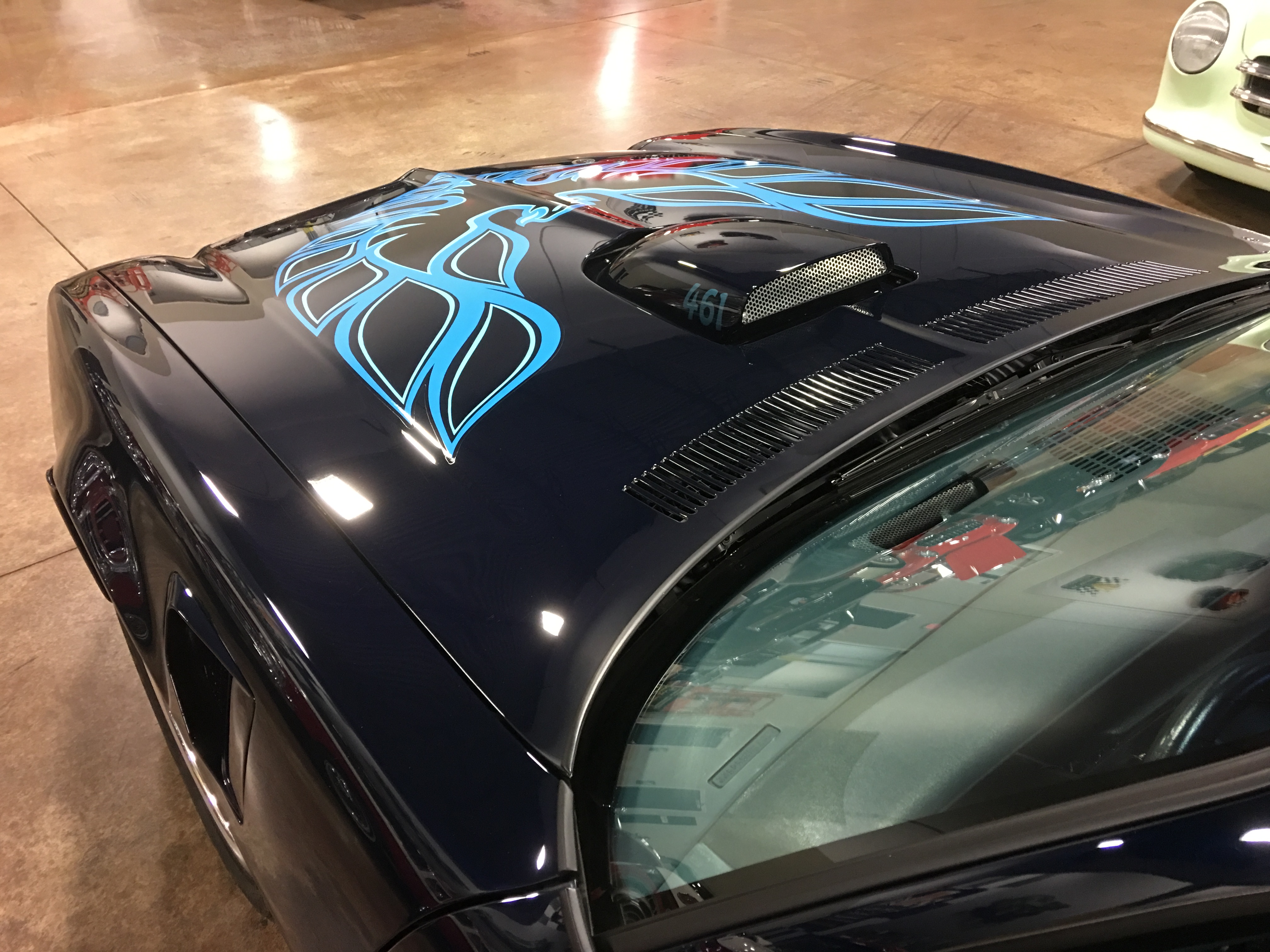 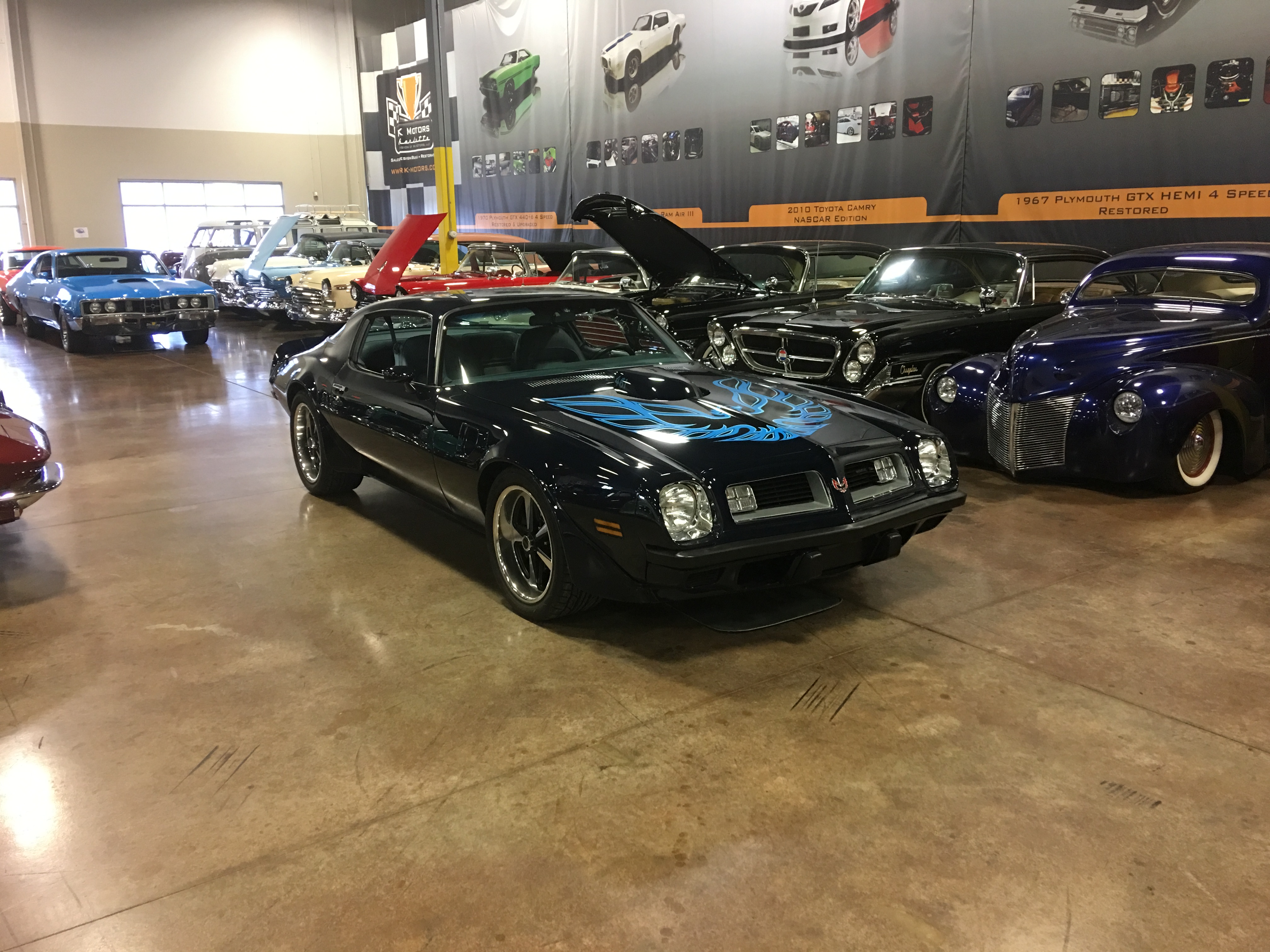 And there you have it! The RKM Performance Center’s 1975 Trans Am build is officially entering the shakedown phase. Stay tuned for information on more exciting builds!