Here's the new Bronco before you're supposed to see it.

Just hours after photos of the upcoming Bronco Sport leaked online, a single photo of what looks to be the full-size Bronco has appeared on the fullsizebronco.com forum. With a boxy shape, aggressive fender flares, a rugged grille, and round headlights, it seems to match up with the spy shots we've seen of the SUV so far.

The four-door Bronco shown above looks to be equipped with a removable soft top—something we knew would be coming for awhile now. The big bumpers and all-terrain tires align with some of the spy shots of camouflage test mules we've seen in the past. If you compare this truck's window lines and fender flare design to the leaked photos of the two door from earlier, they look identical. 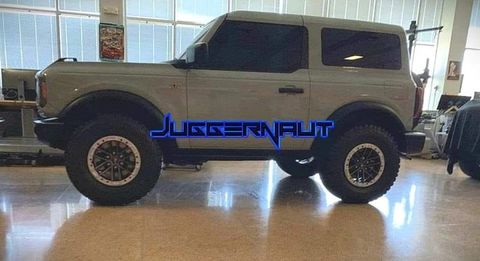 The two-door Bronco shown here popped up on the same fullsizebronco.com forum thread, sporting a body-colored hard top, similarly meaty tires, and some extremely tinted glass. We can also spot some metal latch points towards the front of the hood, and a badge on the front fender.

Of course, there's always a small chance these could just be well-disguised photoshops. But judging by what we're seeing here and the information we have, these are likely the real thing.

The full-size Bronco is set to be launched sometime in March, so we're only weeks away from seeing this truck in an official capacity. No specs have been confirmed, but it's likely the Bronco will receive a version of the Ford Ranger's 2.3-liter turbo inline-four drivetrain, along with a hybrid variant. It could also get removable doors and a manual transmission to compete directly with the Jeep Wrangler.

We've summarized everything we know on the upcoming Bronco in a dedicated article, which you can read here.