NASCAR's Round of 8 Now Set After Charlotte 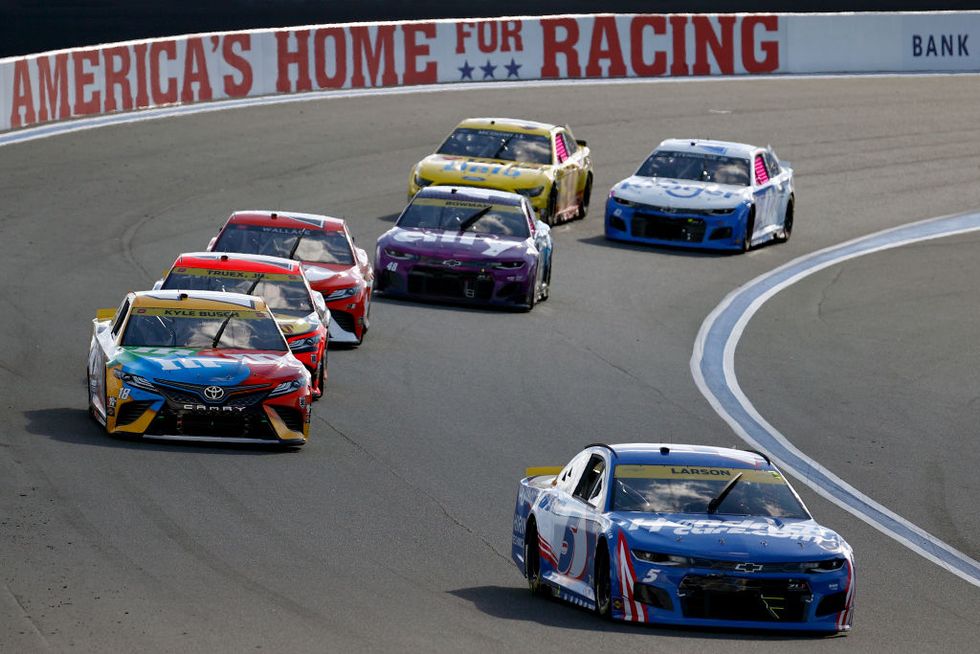 Former champion Kevin Harvick was the best-known of the four drivers eliminated from the NASCAR Playoff Series in Sunday afternoon’s Bank of America Roval 400 at Charlotte Motor Speedway. The 2014 Cup Series champion was below the elimination line at the finish, along with Christopher Bell, William Byron, and Alex Bowman.

His 33rd-place finish, 11 laps down, in the No. 4 Stewart-Haas Ford left him ninth in the standings, 25 points outside the top-eight at the finish. He began the 252-mile race fairly safe within the 12-driver field, ninth-ranked, 41 points ahead of the cut line. He had been ninth, third, and 11th in the three previous Roval races, and mostly ran well enough to stay safely within the group of drivers expecting to advance.

He’ll run the last four races of the season but will not be eligible for the title no matter how he fares. The next three-race set opens next weekend at Texas Motor Speedway, continues on October 24 at Kansas Speedway, then ends on October 31 at Martinsville Speedway.

The eight advancing from the original field of 16 are Hamlin and former champions Kyle Busch and Martin Truex Jr. from Joe Gibbs Racing; Larson and reigning champion Chase Elliott from Hendrick Motorsports; and Blaney and former champions Logano and Brad Keselowski from Team Penske.

Hamlin was already assured of advancing ahead based on his round-opening victory at Las Vegas three weeks ago. With his victory on Sunday, Larson also automatically moved into Round 3. The other six championship contenders advanced via points: Logano (25 above the cutoff line, Blaney (plus-20), Elliott (15), Keselowski (3), and Truex Jr. (squarely on the line).

Harvick ended the Bristol-Talladega-Charlotte round 25 points below the line. Bell was 28 below, Byron was 43 below, and Bowman was 52 below. Because of the fluid nature of lap-by-lap points, almost everyone except Hamlin was at some point below the cut line … and just as quickly above it.

“It was one of the most never-wracking races I’ve ever seen,” said Rick Hendrick owner of the Chevrolets of Larson, Elliott, Byron, and Bowman. “I tried to keep up with whether my teams were in or out (of the Playoff field). There were times during today when I didn’t think it would be possible to do what we did.”

Elliott managed to salvage a respectable 12th place after a mid-race incident with Harvick … perhaps a carryover of their recent on-track beating and banging at Bristol. Elliott ran a handful of laps with much of the rear-clip sheet metal hanging by a thread, flapping in the wind until it finally fell off.

Larson had some adventures of his own. His car developed an electrical problem near midway, forcing crew chief Cliff Daniels and his team to change the battery and the alternator belt during a couple of “quickie yellows” that put even more pressure on the team. 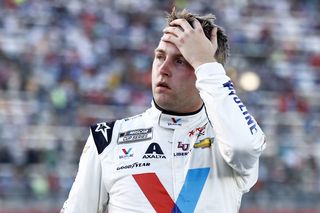 William Byron spun with only a few laps left while fighting for the lead Sunday. JARED C. TILTON GETTY IMAGES

“I noticed my battery was going low,” Larson explained after his series-leading seventh victory, his third on a road course this year, and his second in two Cup Series starts this year at CMS. “I was getting stressed out, (thinking), ‘man, I'm not going to get knocked out of the Playoffs like that.’ It wasn't looking too good.

“But everybody on our car did a great job of staying calm. Cliff, as always, did a great job communicating with me what was going on. Getting the battery changed, alternator, whatever it takes to get it changed to get our battery staying running. I wouldn't have believed them (Daniels telling him the car would be fine).

“It’s so satisfying because I really did not think that we were going to have a shot to win today. I had a lot of different emotions throughout the middle portions of that race, thinking this is so depressing and sad and crazy that I'm going to lose my shot at a championship because of an alternator issue.”