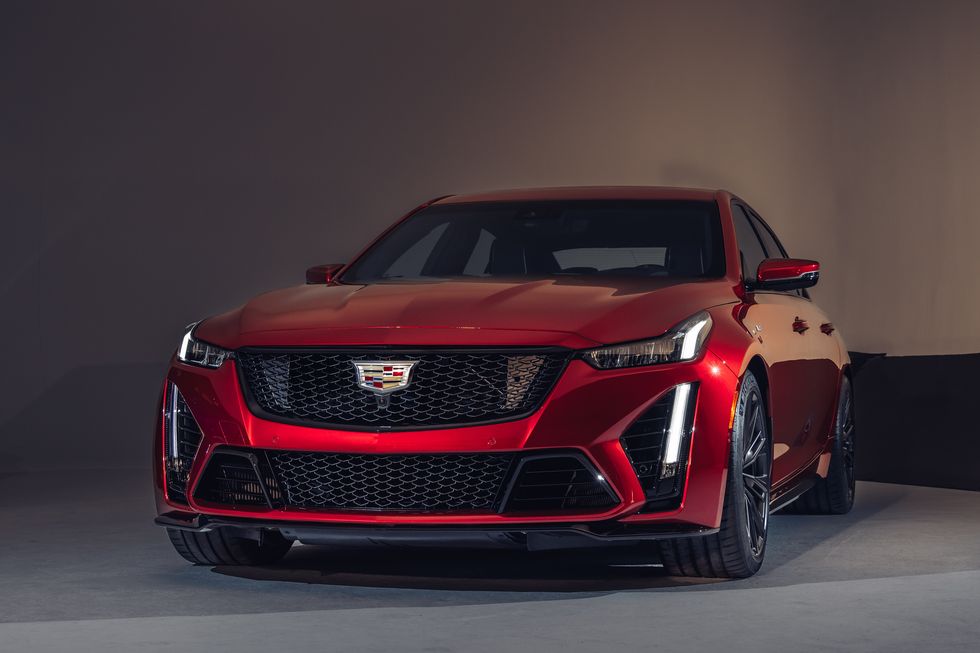 Starting at $84,990, this sedan will serve as a final gas-powered sendoff to Cadillac's impressive V performance subbrand.

Forget about the name change for a second. Or that this is the final era for gas-powered Vs. Let's first live in the now and revel in the fact that the most powerful Cadillac ever is offered with a manual transmission. That's right, the CT5-V Blackwing's 668-hp supercharged 6.2-liter V-8 comes standard tethered to a six-speed Tremec TR6060 gearbox from the Camaro.

But with this most excellent news comes equally bad news. Cadillac boss Rory Harvey confirms that the CT5-V Blackwing—along with its simultaneously announced CT4-V Blackwing sibling—will be the last gasoline-powered V models, capping off a brilliant run of ferociously capable yet daily-drivable models that started with the 2004 CTS-V. It doesn't mean V is dead, but next time around it'll be electric.

Although this highest-performance CT5 is an evolution of the previous CTS-V, both the model name and performance designation have changed this time around. CTS has become CT5, and the former top V moniker has become V Blackwing. That's a shift in the previous hierarchy of V Sport to V to now V and V Blackwing. Although the Blackwing name started as a label for the exclusive-to-Cadillac twin-turbo V-8 that powered the short-lived CT6 and CT6-V, the company now says it means simply "the pinnacle of Cadillac performance." 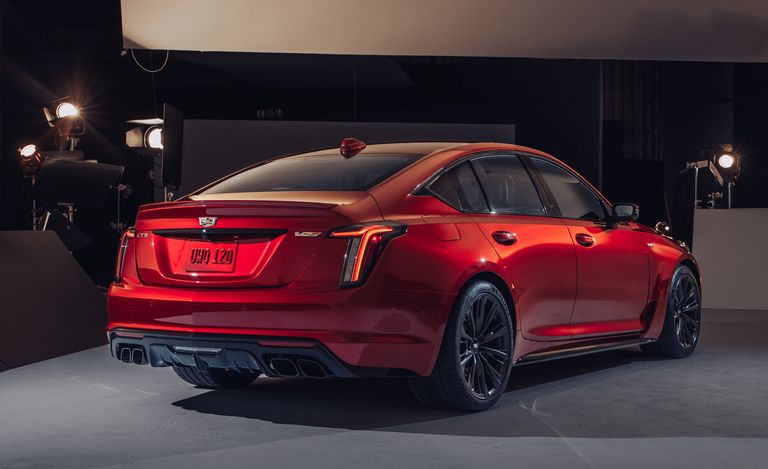 It seems silly to change the nomenclature now, right before another total revamp to electric power. But, also, who really cares what it's called? We won't look a gift V-8-powered, shift-it-yourself supersedan in the mouth.

The supercharged 6.2-liter V-8 returns for an encore performance from the previous CTS-V with intake and exhaust improvements that bump its output from 640 hp and 630 pound-feet to 668 and 659, respectively, this time around. Although the Eaton four-lobe supercharger still displaces 1.7 liters, it now has smaller-diameter rotors to improve response. Each engine is hand-built by a single technician at the Corvette assembly plant in Bowling Green, Kentucky, who signs each of his or her creations.

Cadillac promises a 3.7-second zero-to-60-mph time with the available and quick-shifting 10-speed automatic, although that's not any quicker than before. The quickest we got out of a CTS-V was 3.5 seconds to 60 mph, and with a similar claimed weight of just over 4100 pounds for the CT5-V Blackwing, we expect similar results. With the manual, the CT5-V Blackwing will be slower. No one cares. 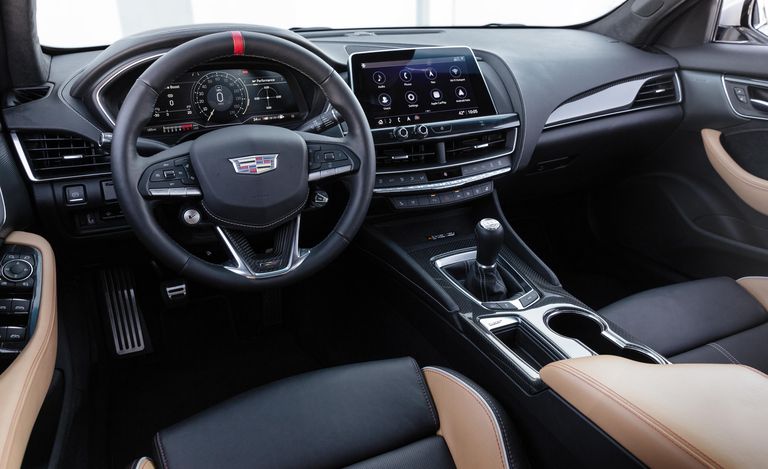 After the previous CTS-V went automatic only, the manual makes a triumphant and surprising return, complete with rev matching and no-lift-shift functionality. Perhaps assisting in the about-face is the high desirability of the two-generation-old manual CTS-V—particularly the bonkers wagon variant, which continues to appreciate and trade at or even above its original sticker price. The expected take rate on the CT5's manual is as high as 25 percent, according to product marketing manager Ken Kornas.

Cadillac says these Blackwings are the company's most track-capable models ever, and that means something coming from a nearly two-decade line of Nürburgring-honed missiles. There are Brembo six-piston front and four-piston rear calipers—available in gray, blue, red, or bronze—shrouding 15.7-inch front rotors, which are the largest ever to halt a Cadillac. For the first time, there are available carbon-ceramic rotors that shed a claimed 53 pounds. There's also an electronic limited-slip differential, forged 19-inch wheels, transmission and rear-differential coolers, and the fourth generation of Cadillac's impressively adjustable magnetorheological shocks. The tires are Michelin Pilot Sport 4Ss in 275/35ZR-19 and 305/30ZR-19 sizes, 10 millimeters wider than on the CTS-V at both front and rear. But they will likely perform more like Michelin's Cup 2 tires, as Cadillac says that the majority of the tire, which was developed specifically for the Blackwing, uses R compound rubber.

In October 2020, Cadillac teased magnesium wheels, but the automaker has provided no additional information on the lightweight wheels other than that they won't be available at launch and are still planned to be an option at some point in the future.

The CT5-V Blackwing has numerous structural enhancements, including an underhood strut tower brace emblazoned with a V, plus extensive aero work including a front splitter, functional fender vents, and drag-reducing underbody panels, helping to push the CT5 to a claimed and imprecise top speed of "over 200 mph." As with the CTS-V, there's an available package to swap out the front and rear aero add-ons with carbon-fiber bits.

Inside are available carbon-fiber-backed seats, with red and white stitching supposedly inspired by racetrack curbing. The steering wheel comes with a number plate to identify the car's build in the Blackwing sequence, as well as the transmission. The built-in video, audio, and data recorder—GM calls it a Performance Data Recorder—is back again, and the 12-inch digital gauge cluster looks to have gotten a lot of the Corvette's functionality. There's also a new steering-wheel switch to adjust the Performance Traction Management (PTM), which is a terrific idea. Before, drivers had to know to double tap the stability-control-off button when in Track mode to enter Cadillac's (and Corvette's) excellent high-performance traction- and stability-control programming modes, and then use the mode switch to cycle among them. Let's hope this switch migrates back to the Corvette.

Pricing for the CT5-V Blackwing starts at $84,990, a healthy $36,200 more than a CT5-V, but actually a few thousand cheaper than the previous CTS-V. Although that undercuts a BMW M5 or Mercedes-AMG E63 by more than $20,000, the CT5's new positioning means that this time around its priced slightly higher than the starting point for the M3 and C63.

Cadillac is taking reservations now, with deliveries starting in the summer of 2021. Get the manual.