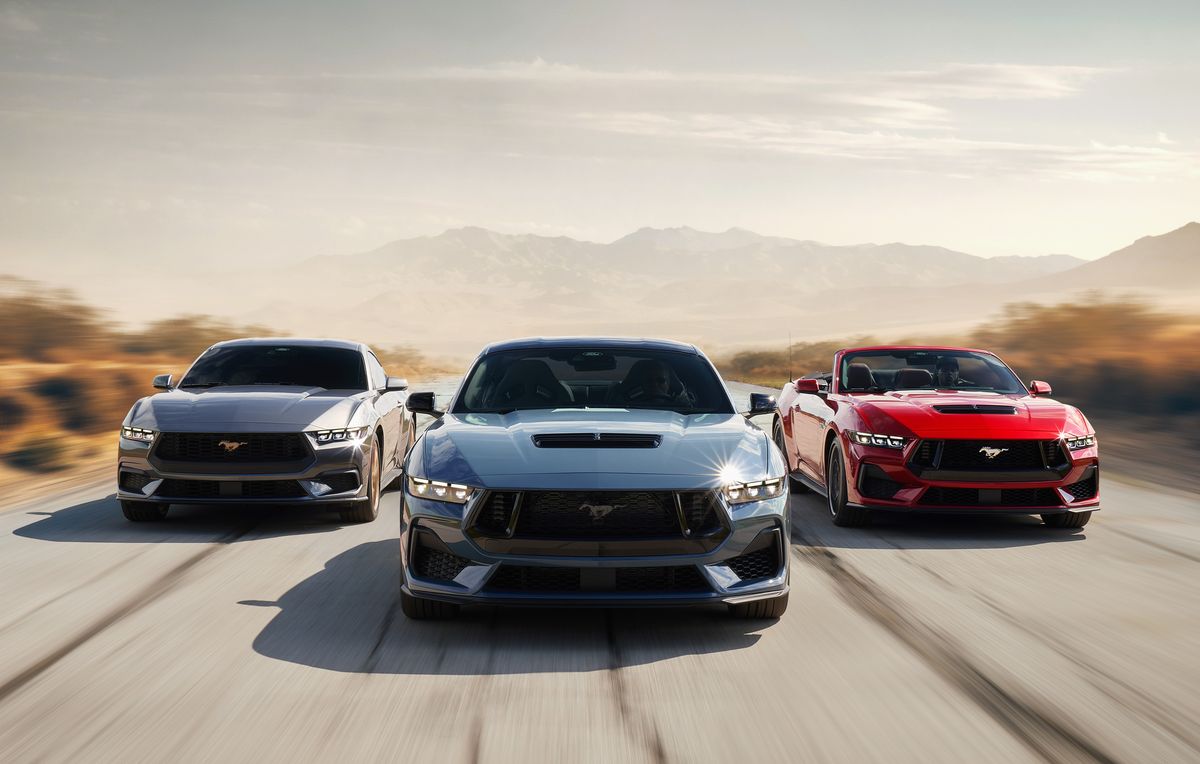 The new Stang still offers a V-8 with a manual, but now it also has a digitized dashboard and a drift stick.

It's been almost 60 years since the original Ford Mustang was introduced at the 1964 World's Fair. The rest is automotive history, with the Stang becoming an instant hit and basically inventing the pony-car genre. Now, after nearly six decades and countless iterations, the 2024 Ford Mustang arrives and signals the start of the seventh generation—and possibly the last gas-powered ponies.

Sure, the seventh-gen Mustang's design is more evolutionary than revolutionary, but its bodywork is entirely new and noticeably edgier than before. The previous generation was designed for a global audience, and the new one definitely preserves its predecessor's attractive proportions, but now it gives off more muscular vibes. Its front end is squarer and said to be inspired by the original Mustang, but its new headlights, with their tri-bar LED elements, are a modern touch. Its three-bar taillights remain a signature detail, but they're more pronounced than ever. The car's hips are also wider, and the rear overhang is shorter. 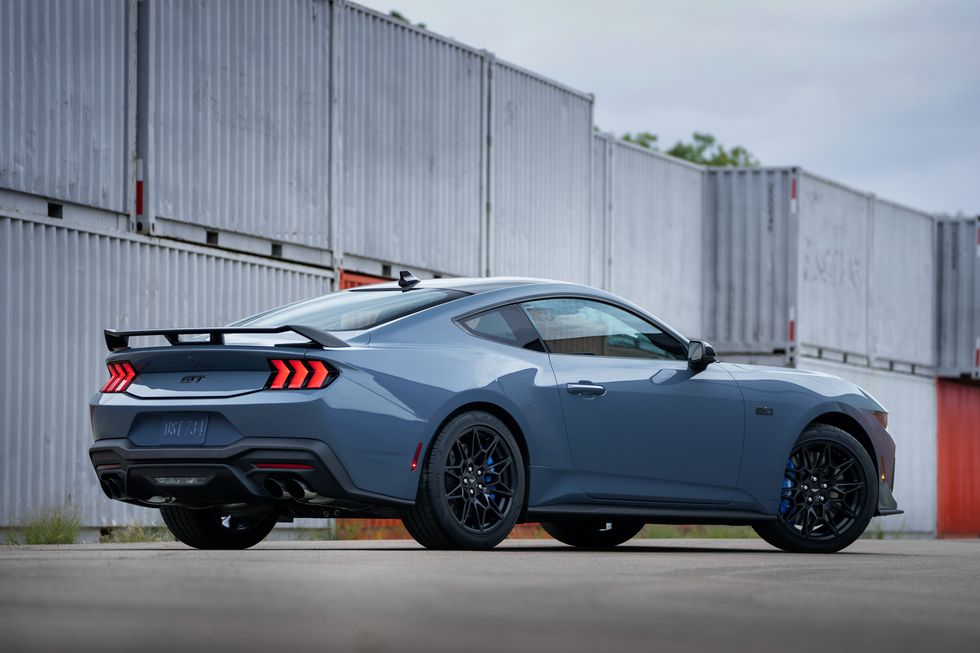 Without a doubt, the most dramatic difference between the new Mustang and prior versions is its interior. Gone is the classic "double bubble" dashboard design. Instead, the cockpit now contains a more driver-focused layout, one that's dominated by digital displays. Most 2024 Mustangs have a massive glass panel that combines a 12.4-inch gauge cluster and a 13.2-inch touchscreen; the base model has the same size screens, but they're separated. The new-look interior is a big break from tradition, but Ford said it's intended to appeal to a younger demographic of people who grew up playing video games.

Video games like Forza Motorsport also inspired the animations and how users interact with the Mustang's Sync 4 infotainment system, which Ford says has a new architecture that allows over-the-air updates and copious customization. Among the system's many features is the ability to select different instrument-panel designs, including retro dials exactly like those on '87–'93 Fox-body Mustangs. That's super cool. Too bad there aren't any other options from old-school Mustangs. 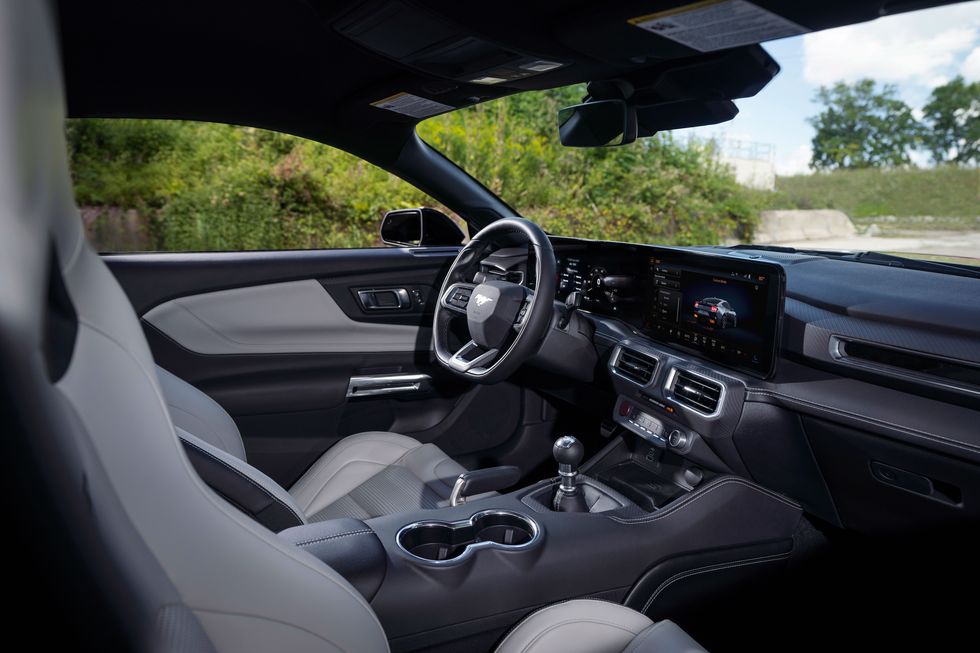 Video games like Forza Motorsport also inspired the animations and how users interact with the Mustang's Sync 4 infotainment system, which Ford says has a new architecture that allows over-the-air updates and copious customization. Among the system's many features is the ability to select different instrument-panel designs, including retro dials exactly like those on '87–'93 Fox-body Mustangs. That's super cool. Too bad there aren't any other options from old-school Mustangs.

The 2024 Mustang continues to be offered as a coupe or convertible. Both body styles are also still available with an EcoBoost turbocharged 2.3-liter inline-four or a Coyote 5.0-liter V-8. However, both engines have been heavily revised for the latest generation, and each can be identified by distinctive front-end details, such as the larger grille and air intakes on the V-8–powered GT models.

The EcoBoost engine has the most significant changes, which include better packaging, new fuel-delivery and ignition systems, a higher compression ratio, and an updated turbocharger, among other enhancements. Ford says the updates make the four-cylinder more fuel-efficient and improve performance. While we're told horsepower and torque figures won't be released until closer to launch, we expect to see a slight boost to the EcoBoost's current ratings of up to 330 horsepower and 350 pound-feet of torque. Sadly, the four-pot is now only offered with the 10-speed automatic due to low take rates for the manual transmission. 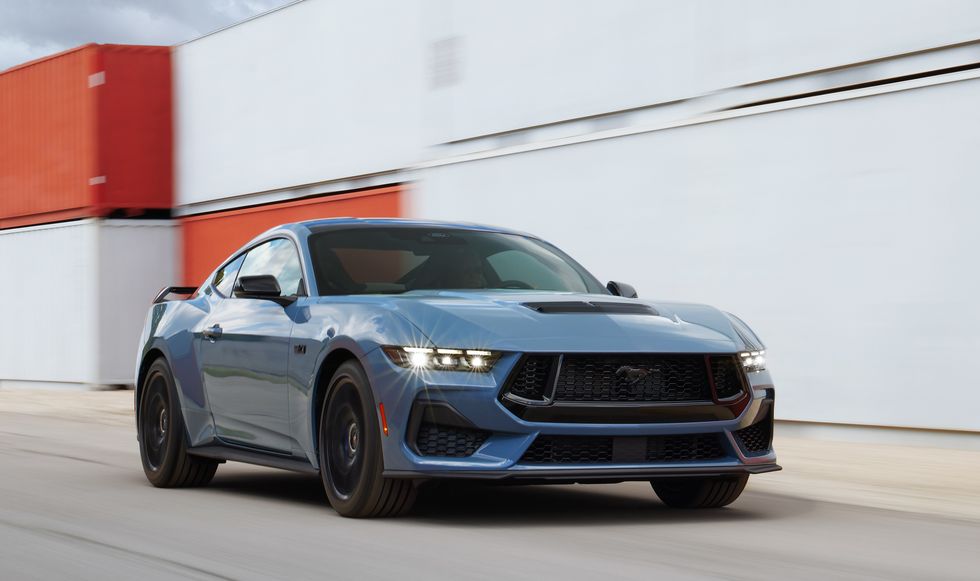 The fourth generation of the Coyote engine adds dual throttle bodies fed by dual air intakes, a setup that Ford says provides better airflow and helps increase horsepower. We don't yet know the engine's exact output, but Ford says the updated V-8 is the most powerful one yet in a Mustang, so it should exceed the current version's 480 horses and 420 pound-feet of torque. The 5.0 also receives a new steel oil pan that's said to help improve oil flow and reduce friction. The driver's-side exhaust manifold has been updated, too, and the camshaft timing on the exhaust side has been revised. The V-8 still comes standard with a six-speed manual transmission, which Ford paired with a new dual-mass flywheel that is more robust. The 10-speed automatic remains an option, and it has minor updates meant to improve shift speeds and programming. 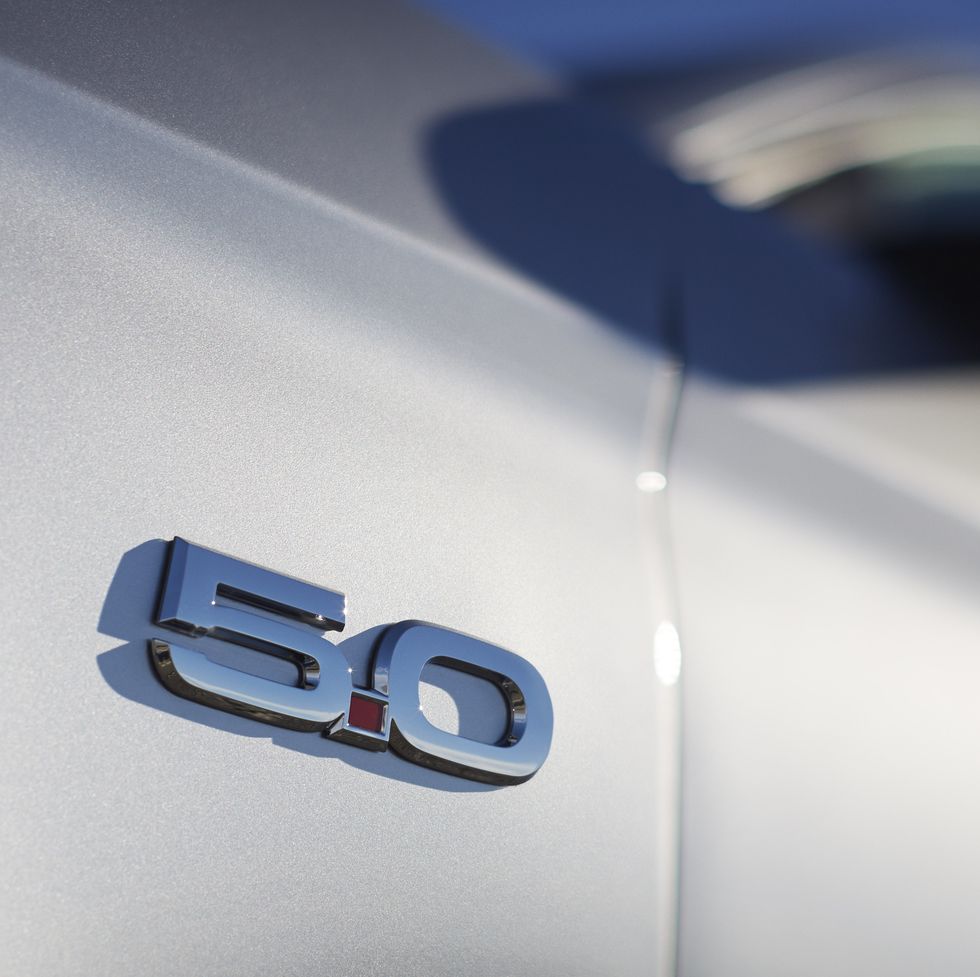 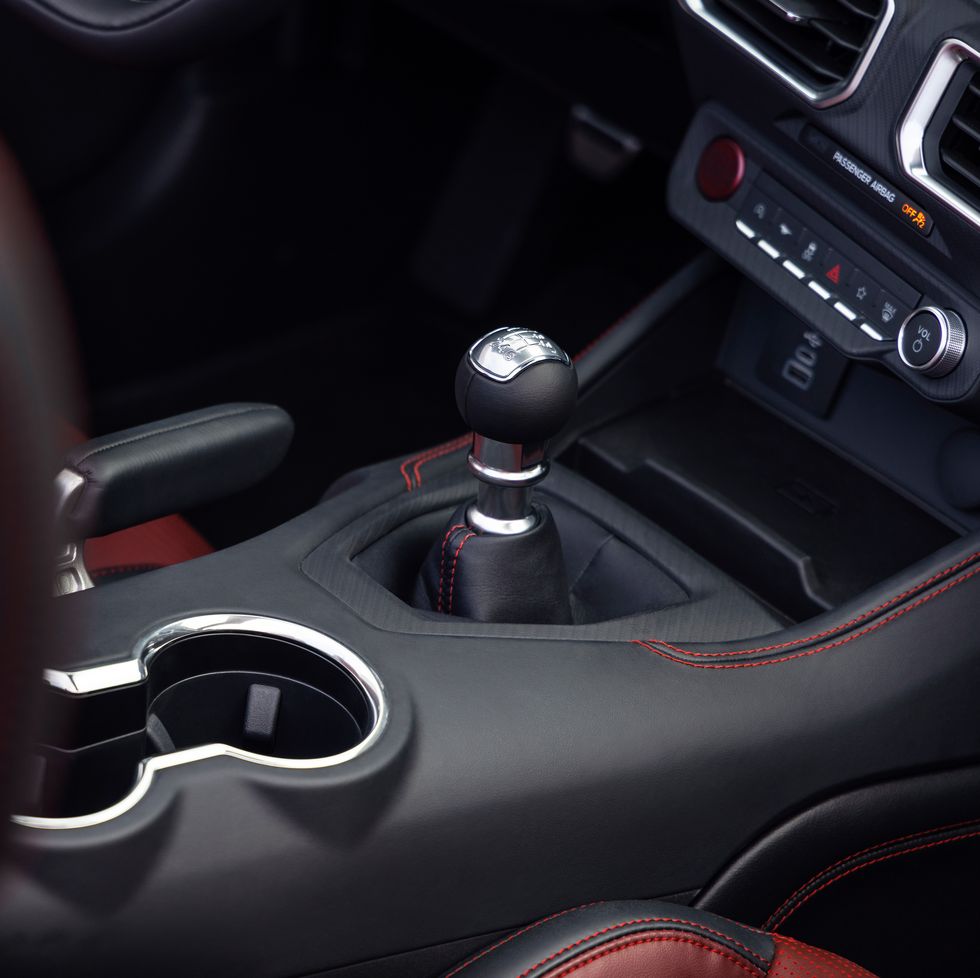 One of the interesting new features Ford introduces on the seventh-gen Mustang is called Remote Rev. As its name suggests, it allows people to remotely rev the engine using the car's key fob, which seems destined to entertain adolescents and annoy older audiences. Remote Rev runs on its own pre-programmed sound and comes on any Mustang with the active exhaust system, except for manual-equipped models. Cue the sad trombone.

Improved Steering and a Drift Stick

By and large, the new Mustang has the same platform as its predecessor, with the two sharing an essentially identical 107.0-inch wheelbase. Still, Ford did tweak things by specifying aluminum for both front lower links on all cars, changing the design of the suspension knuckles, and updating the rear suspension links to units inspired by the Shelby GT350. The Mustang also has new spring rates and shocks that are said to better match each specific model's ride and performance targets. Most notably, the steering system has been heavily revised with a new rack, a quicker ratio, and other changes that Ford claims make the tiller more responsive (20 percent, to be exact). The Mustang also now has a flat-bottom steering wheel with a thicker rim and a slightly smaller diameter. 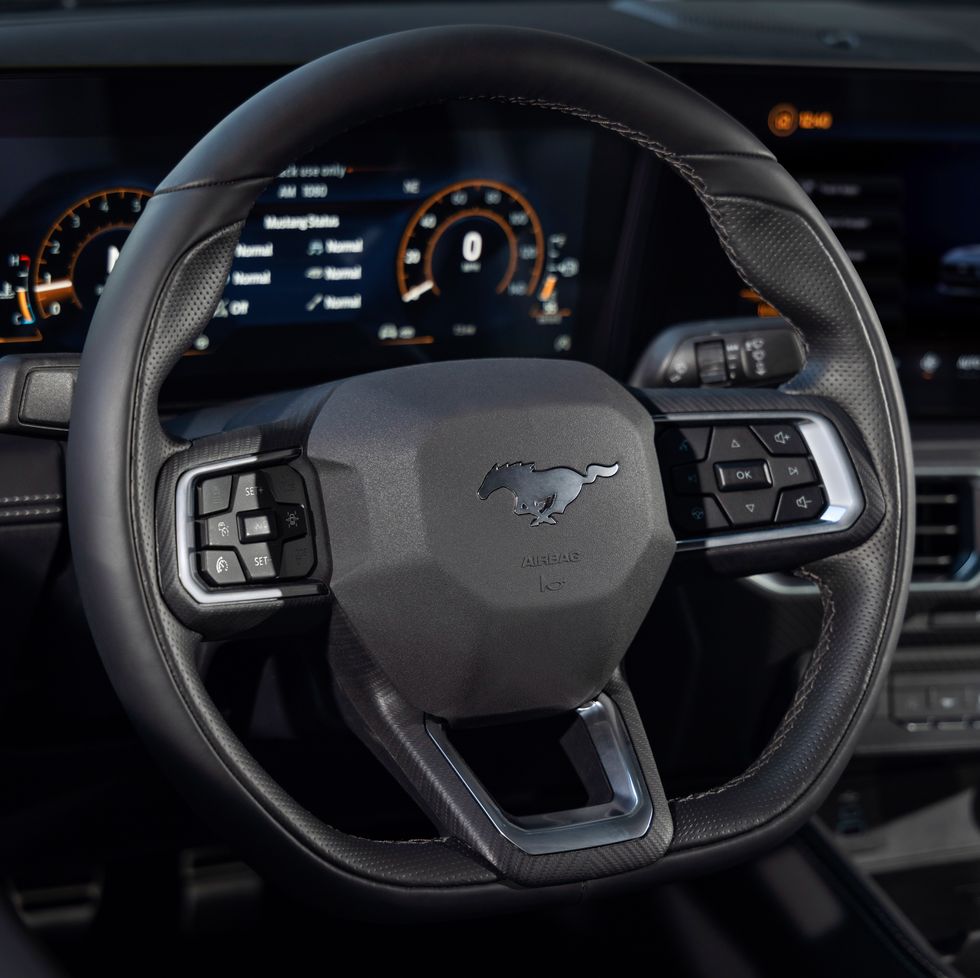 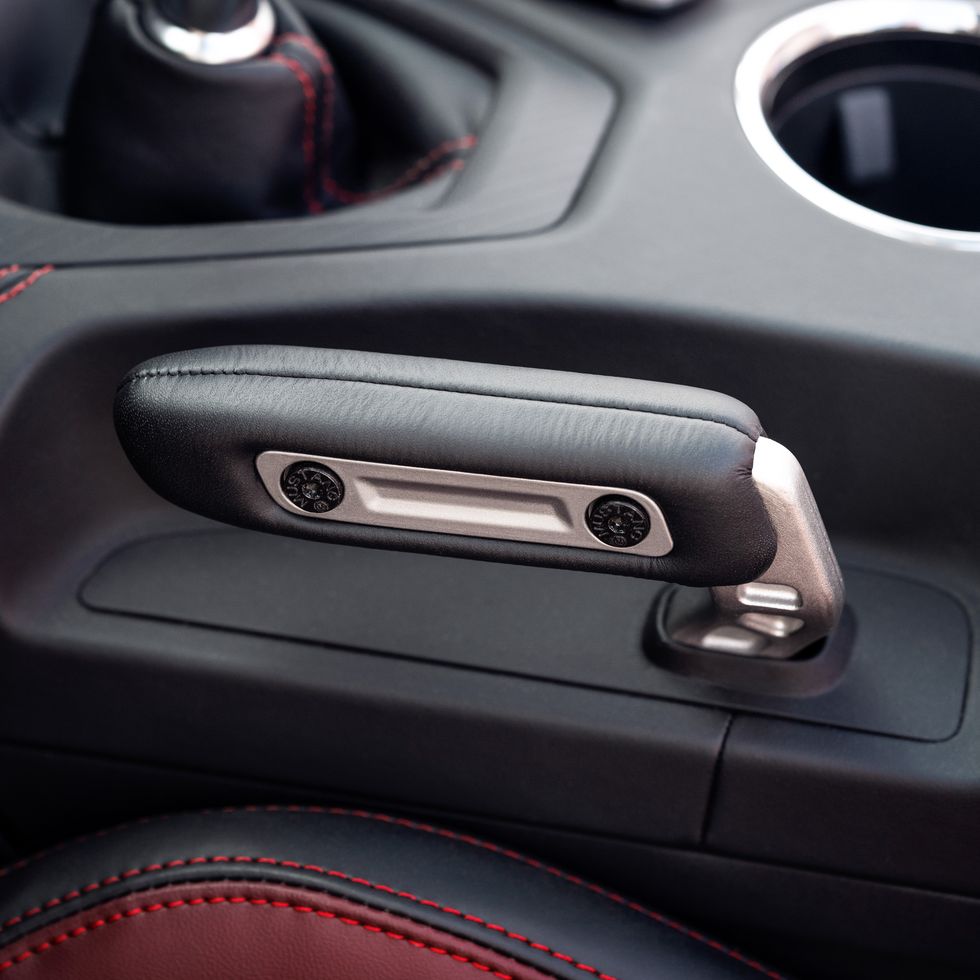 The seventh generation has new brake packages, too, that go with the introduction of an electronic brake booster. Models with 19-inch wheels also have new Brembo six-piston fixed front calipers and four-piston rear clampers. More noteworthy is the new electronic drift brake—not to be confused with the "Drift Stick" Ford offered on the Focus RS. It comes on all Mustangs equipped with the optional Performance package. While it looks like a traditional e-brake lever, when drift mode is activated, it instantly locks up the rear wheels with four to five times more force than a regular parking brake. There's no modulation involved. It's a cool option, but perhaps one destined for Cars and Coffee infamy.

Circling back to the Performance package, it's available on EcoBoost and GT models. It brings extra bracing, a larger radiator and cooling fan, larger front and rear brakes, a Torsen limited-slip diff, thicker anti-roll bars, and wider rear wheels and tires. When it comes to rubber, Mustangs with the Performance pack now wear Pirelli P Zero PZ4 summer tires instead of Michelin Pilot Sport 4S summer tires; a set of Continental all-seasons are standard. With GT models, the Performance package also includes brake ducts and an auxiliary engine oil cooler. 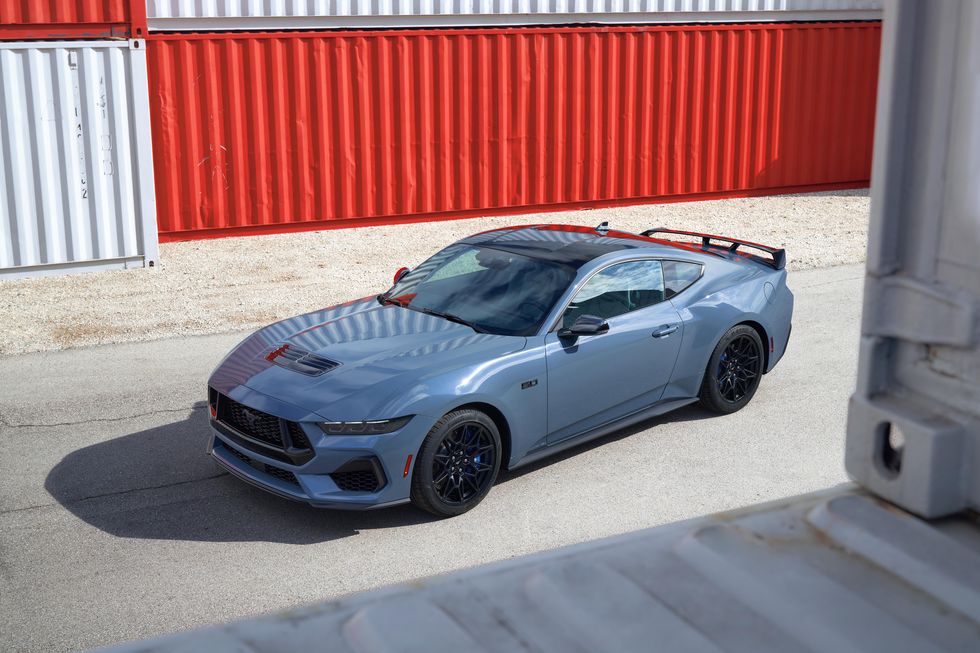 Regardless of what's under the hood, opting for the Performance kit unlocks a set of Recaro front seats and MagneRide adaptive dampers. What's neat about the latter is that they include what Ford calls Active Pothole Mitigation, which monitors the speed of the shocks and overdamps the system when it encounters a pothole. Yet another novel feature, and one that's sure to come in handy for those of us who live in the Snowbelt.

While Ford hasn't yet announced how much the 2024 Mustang will cost, we expect its pricing to align with the outgoing versions, which currently start around $29,000 for the base EcoBoost model and top out at over $57,000 for the Mach 1. The new Mustang is set to go on sale next summer.