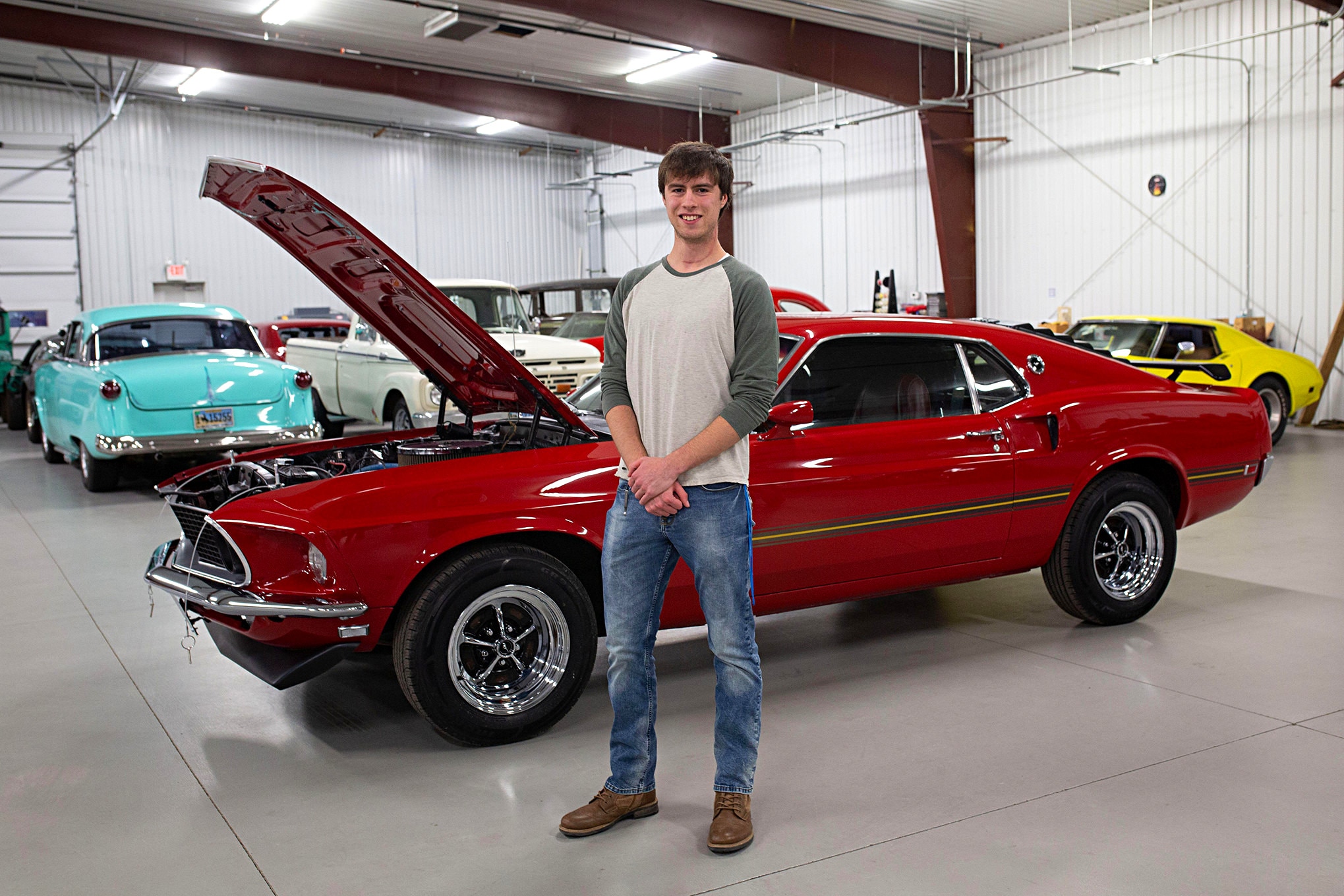 In 1969, Michael Ogle drove a brand-new Candy Apple Red Ford Mustang off the lot in Odessa, Texas. When the time came for him to upgrade to a truck, he considered the trade-in value at the dealership, but instead sold the car to his father who vowed to make the necessary repairs and pass on the car to another member of the family.

The car sat in the shop for five years before being passed on to Michael’s brother, Mark Miller. Along with the car, their father handed Mark a repair manual, detailing his new responsibility to the process. It transported Mark from his high school years in Texas to his college education in Wyoming and all the picturesque locations in between.

The vehicle’s paint began to fade and over the years the car became a permanent fixture in Mark’s garage. The repairs the car needed, and the promise of newfound adventures, slowly became a project for “someday” – yet Mark still couldn’t part with the vehicle.

Ethan Miller and his just-restored ’69 Mach 1.

Over the years, a new dream emerged that the family heirloom could one day be passed down to Mark’s son, Ethan, when the time was right.

"My whole life it just sat in the garage. We had it running once when I was six and never touched it again,” said Ethan.

For as long as he could remember, Ethan had hoped to drive the 1969 Mustang. As he got older, Ethan and his father began working to restore the vehicle, but by the time Ethan turned 16 it still needed significant cosmetic repairs. “My dad always told me that we’d work on it and that it would be mine one day,” said Ethan. “But that never really happened because life happens.”

In 2015, Ethan was diagnosed with cancer and “someday” slipped further and further away.

During his two-year cancer battle, at the heart of his experience was a wish—Ethan wished to have his 1969 Mustang restored through Make-A-Wish Wyoming. “I think he fell in love with this car and knowing that the wish was coming true brought Ethan a newfound hope in the future,” said Ethan’s father 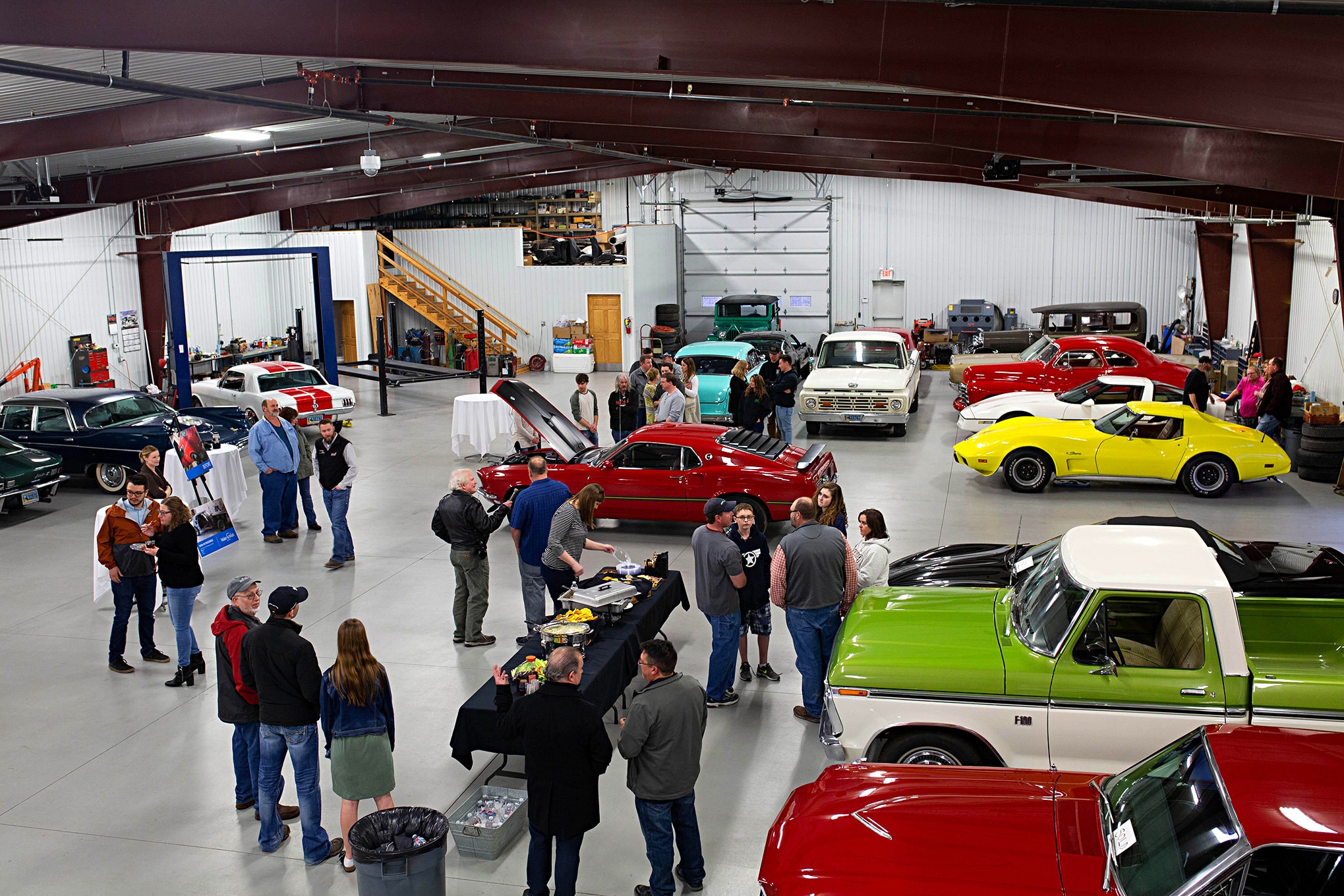 Inside the surprise car show where Ethan was presented his Mustang, from the Make-A-Wish Foundation and local car community.

The Community Sets Wheels in Motion

Ethan’s wish set in motion a project the community came to rally behind. Ed Franklin with Refinish Tech in Casper, Wyoming jumped at the idea to work with the Mustang. The self-described classic car aficionado took on the full scope of the project, donating his time and labor to bring the car to life. The car body was overhauled, refining imperfections while addressing any presence of rust. The paint was stripped away to reveal the unmistakable sturdy structure of the Ford Mustang.

Ed enlisted the full community to be a special part of Ethan’s wish. Sam Parsons Upholstery carefully crafted the vehicles interior, staying true to the original design. Wyoming Automotive Refinish Supply donated the Candy Apple Red paint and Wyoming Signs provided the Mach One classic striping along the side of the vehicle. Anyone who loves classic cars knows the process is a labor of love.

His father still can’t believe that the impossible was made possible. “It’s opened my eyes that there are still people in this town that are willing to step up” for a cause like Ethan’s.

The final touch on Ethan’s wish included an elaborate surprise. With the help of local classic car hub, Z’s Classics, Make-A-Wish Wyoming began planning a car show—a surprise car show. Ethan’s friends knew it wouldn’t take much convincing to talk him into a Friday night car show, but even as they browsed the selection of vintage cars Ethan had no idea what was in store. A special announcement was made that there would be a final addition to the collection and as Ethan’s father drove the 1969 Ford Mustang into the garage the entire crowd erupted. 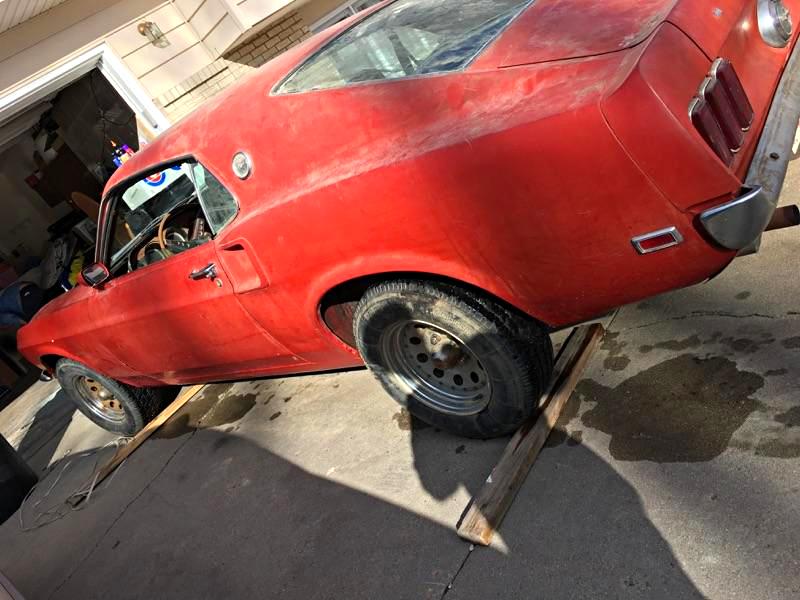 This is what the neglected Mustang looked like at the start of the restoration.

The Freedom of a Wish Come True

For Ethan’s father, passing down the freedoms of the car to his son has been a dream come true. During the two years Ethan battled cancer, he saw the illness take away a piece of his childhood. Now, he sees the confidence and the joy returning to a young man.
“You may still have this scar to remember your cancer from, but don’t look back,” Mark said to his son. For Ethan, his dad hopes this car inspires him to look forward towards the future.

Today, the beautifully restored 1969 Ford Mustang is a source of confidence and excitement for Ethan. When he gets behind the wheel, his father’s high school and college graduation tassels sway back and forth from the rear-view mirror, a constant reminder of the family members who have loved the car before him.

“I’ve always wanted this car. I grew up wanting to fix it, wanting to drive it. I feel like this car has brought me closer to my family. We all grew up with it,” Ethan elaborated on the journey through generations that the car has had.
The appreciation for the classic transcends generations. The freedom behind the wheel of the Mustang has given Ethan the freedom to move forward. One day, Ethan said, maybe he’ll pass it down to his children.

Together, generous donors, supporters, staff and more than 35,000 volunteers across the U.S., Make-A-Wish creates life-changing wishes for children with critical illnesses. To join the Make-A-Wish community and become a part of granting transformative wishes, like Ethan’s, learn more at wish.org. 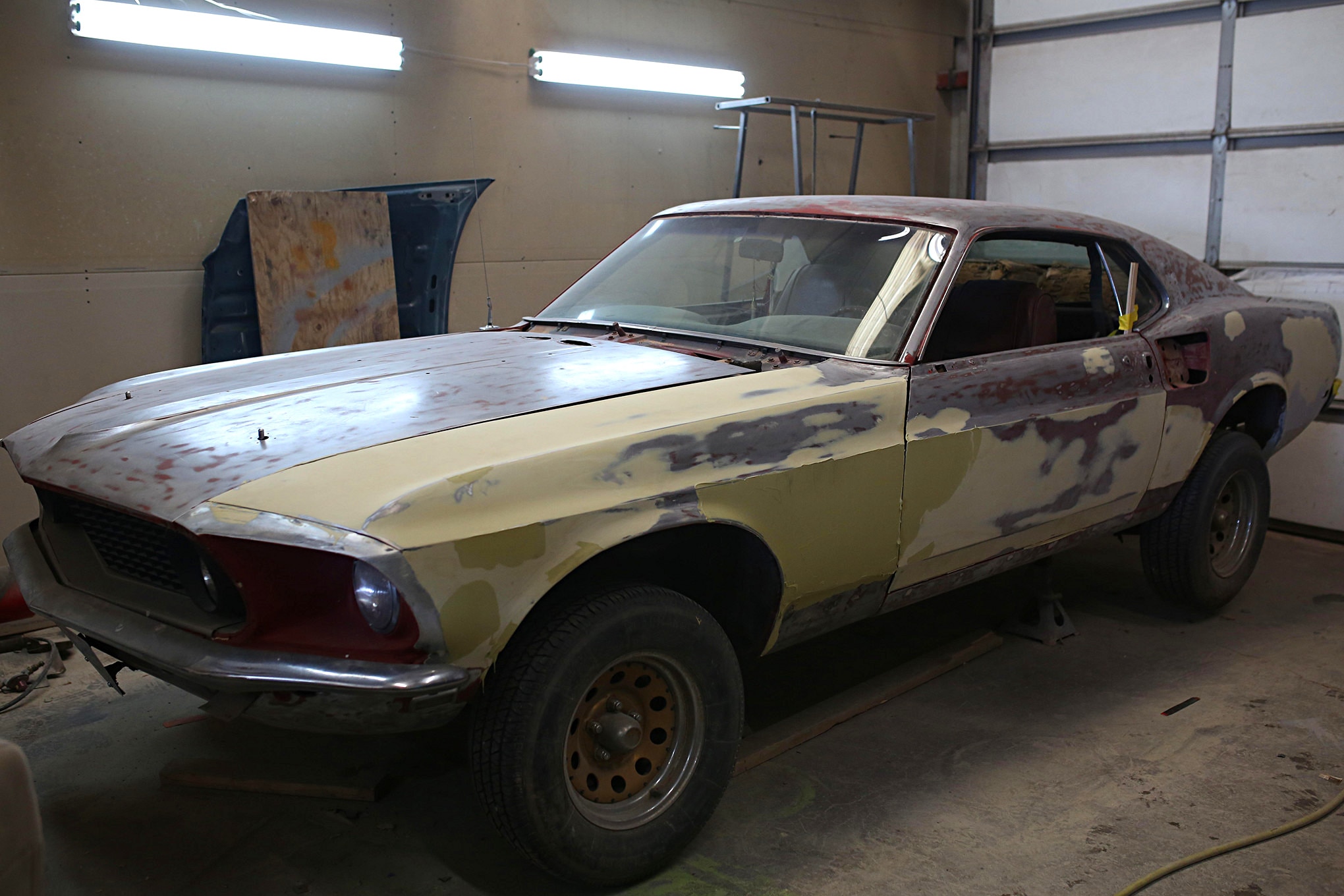 During the restoration at Ed Franklin’s Refinish Tech in Casper, Wyoming. 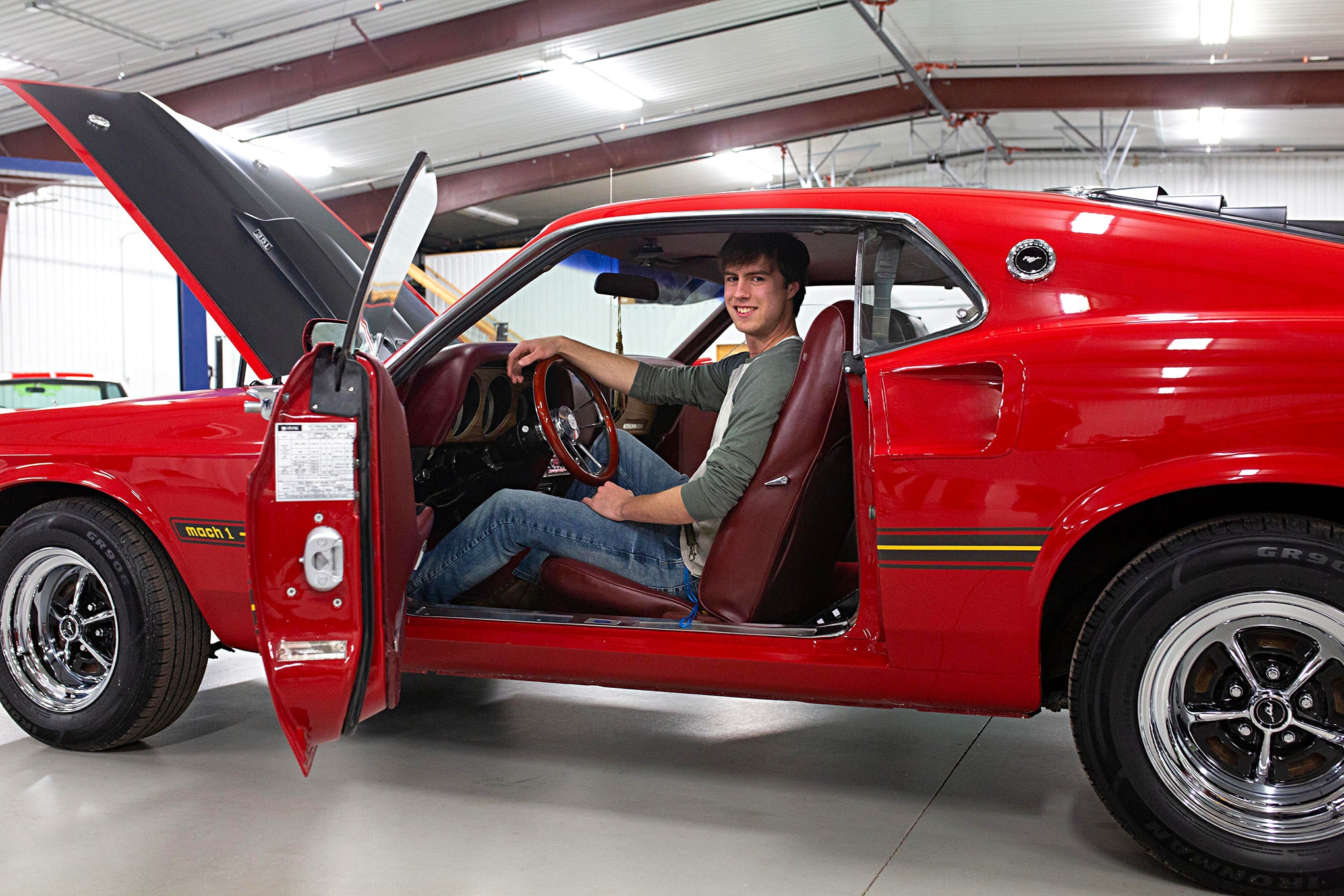 Ethan behind the wheel where his uncle Michael and father Mike once sat as they went through life. Now it’s Ethan’s turn to make memories in the car.