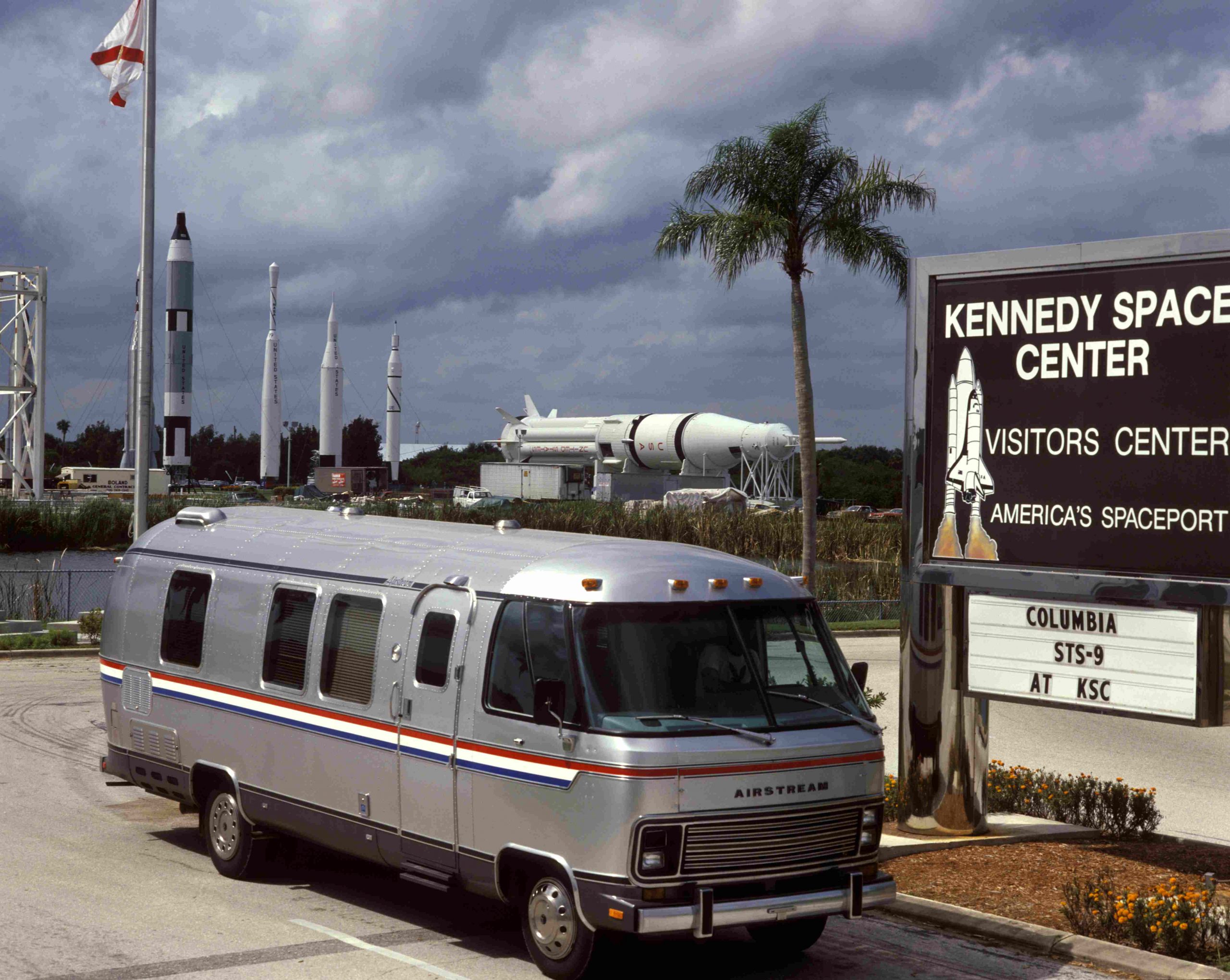 As the Saturn V SA-506 rocket stood on the launchpad, its engines waiting to generate 7.6 million pounds of thrust, astronaut Neil Armstrong took the first step of his long journey. Along with Edwin “Buzz” Aldrin Jr. and Michael Collins, all three wearing cumbersome spacesuits and carrying ventilators, he climbed into a specially-outfitted Clark-Cortez Motorhome, sat down, and waited. It was July 16, 1969, and Neil Armstrong was going to the moon.

Four days later, as millions around the world watched, Armstrong put a human footprint in the lunar dust. It was an unprecedented feat of technology and combined skill, a moment of collective awe. There he was: a man standing on the surface of Earth’s constant satellite. But his journey that Wednesday in July started with a much smaller step into a far more modest vehicle. 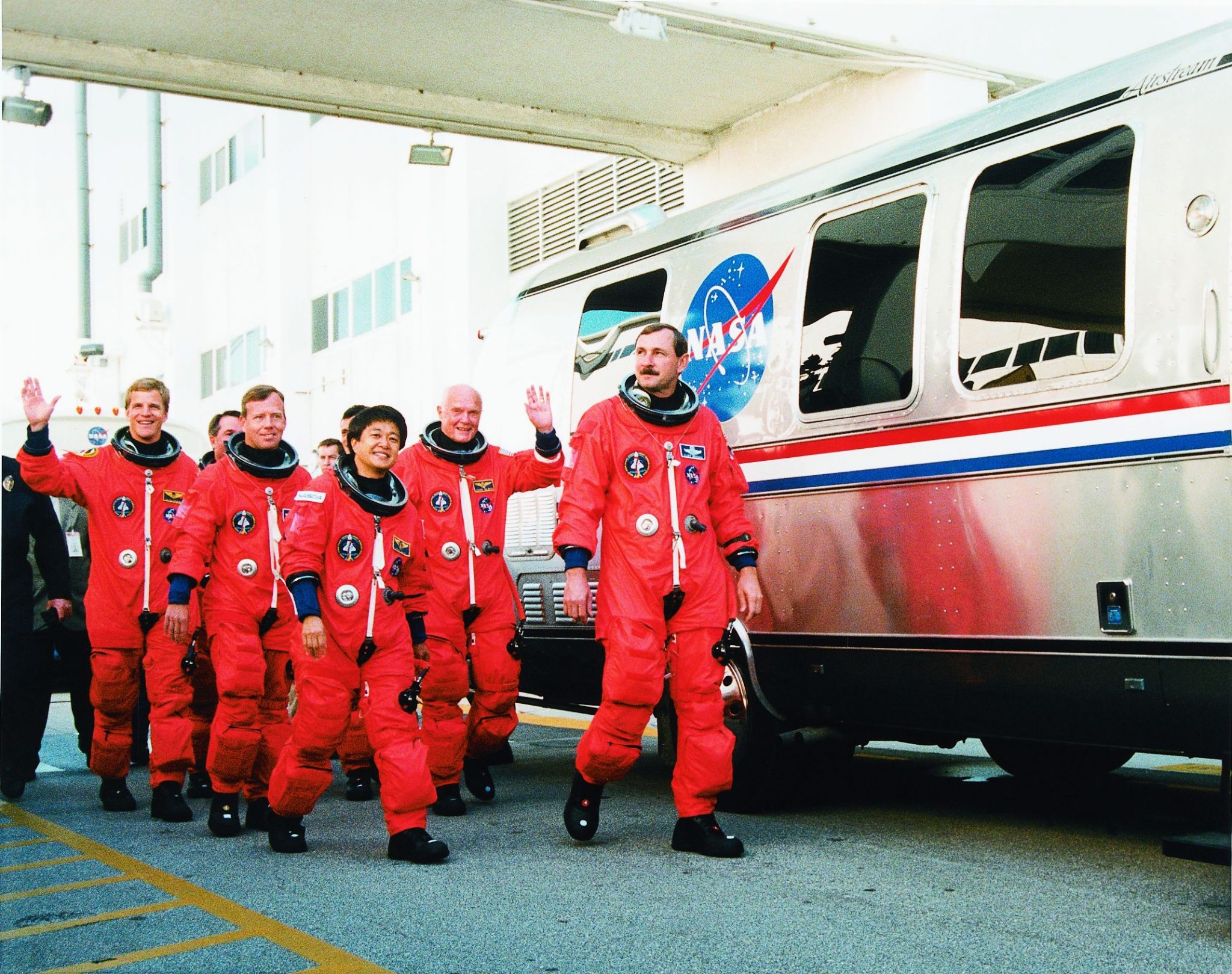 The history of each American spaceflight has long begun with a humble transport van, and it is a tradition that will happily continue when the recently completed Astrovan II carries the Boeing Starliner astronaut team to their CST-100 crew capsule. Once more, astronauts will begin their journey in an Airstream. 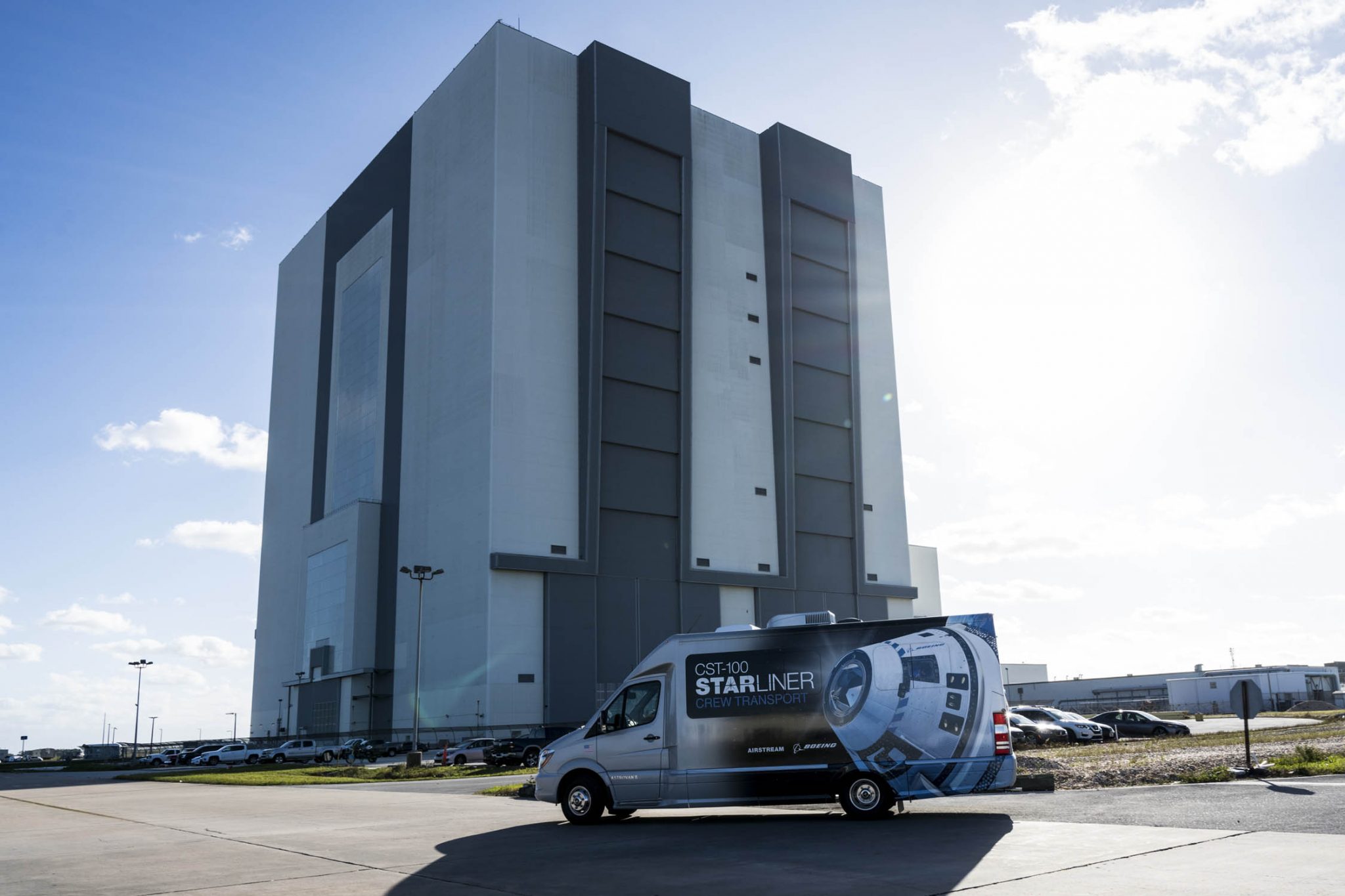 “Our involvement began with the Apollo 11 mission to the moon,” says Bob Wheeler, Airstream’s president and CEO. “Working with Boeing to create a new vehicle for their Starliner astronauts gave us an opportunity to add another chapter to that story.”

Built for Boeing, the Astrovan II marks more than a half-century of Airstream involvement in space travel. For the Apollo 11 mission, Airstream was contracted to build four Mobile Quarantine Facilities (MQFs), essentially a modified version of its iconic silver travel trailer, mounted on a platform. 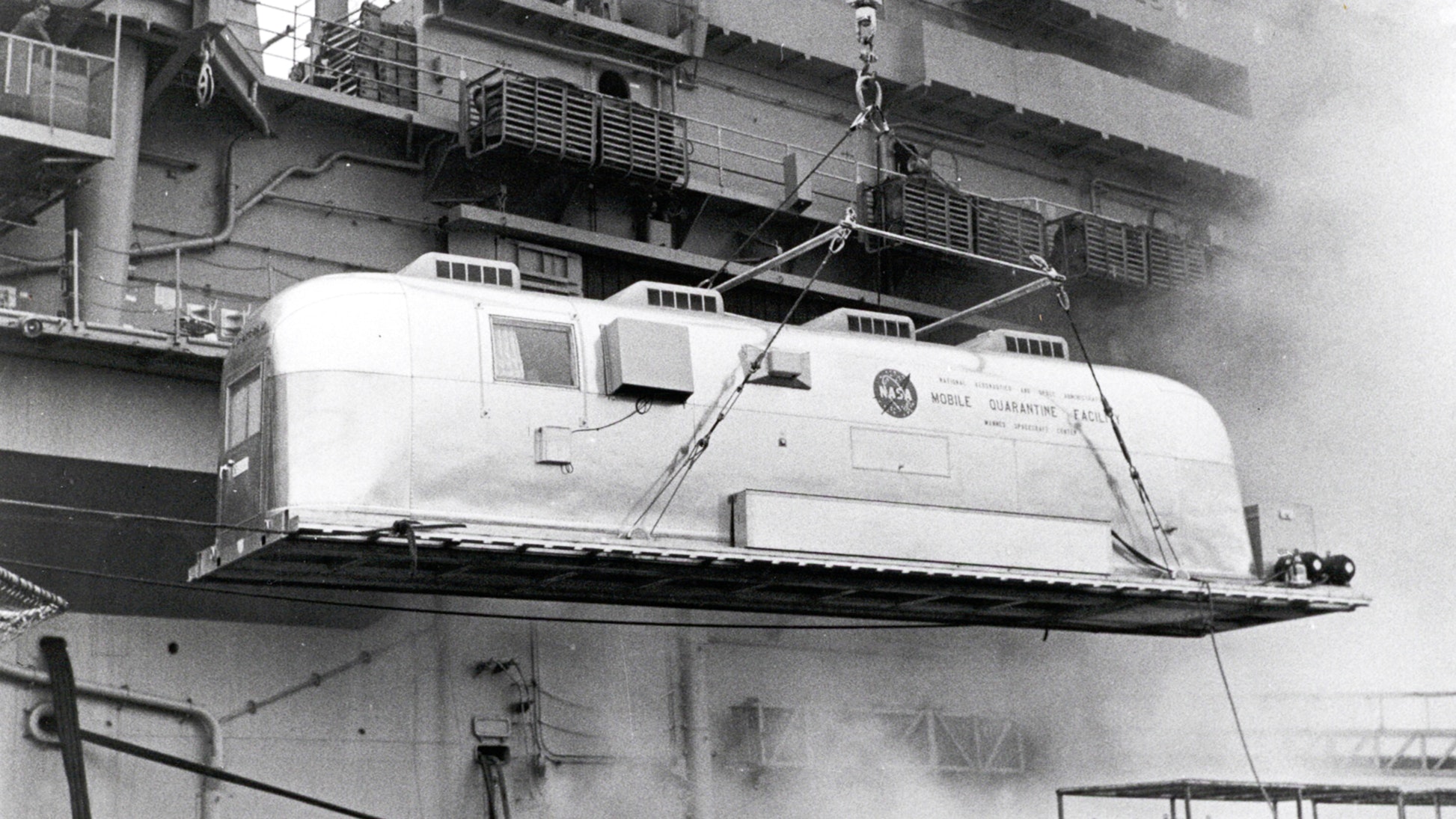 A precaution against any infection that could possibly be brought back from the moon, the 35-foot MQFs were equipped with filters and negative-pressure atmospheres to be biologically secure. A small airlock allowed for the transfer of film and geological samples. The facilities were used continually until Apollo 14, when it was decided that the moon’s surface was sterile.

When the Space Shuttle program began, Boeing once against called upon Airstream. The original Apollo-era Clark-Cortez was proving too small for transport as Shuttle crews grew in number. Airstream’s first Astronaut Transfer Van, as the original Astrovan is more properly called, was commissioned in 1983. Built from a 27-foot Excella motorhome, it was in service for nearly 30 years until the final Shuttle mission in 2011. 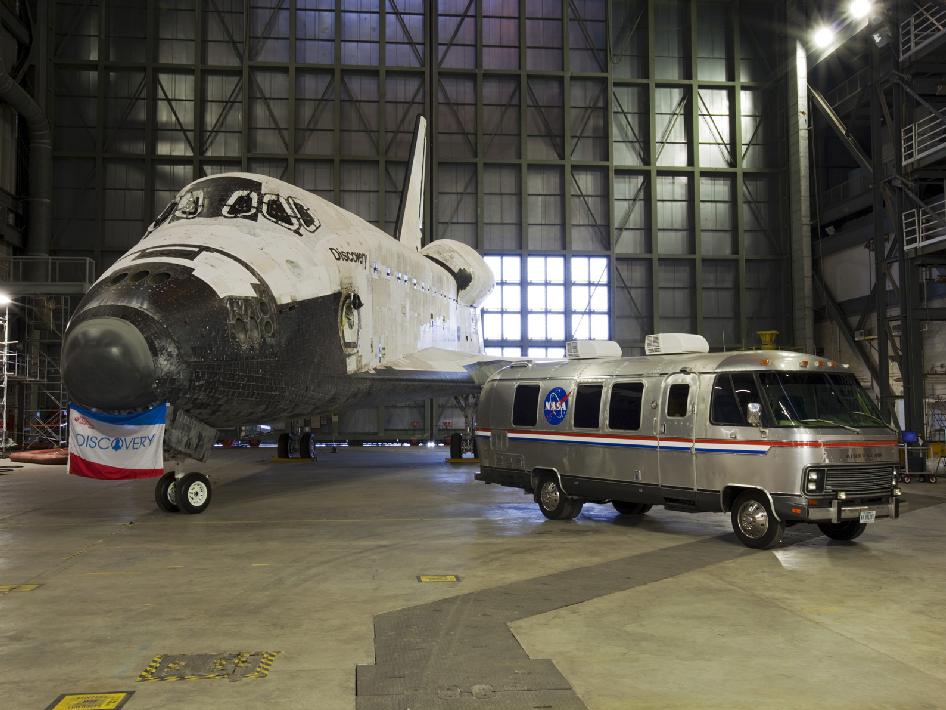 The gleaming, aluminum-skinned Astrovan became an inadvertent symbol of the anticipation of rocket launch. Each Shuttle flight, the crew would load themselves into the Astrovan and begin the first leg of their journey into orbit with a nine-mile drive. Inside, the van was less flashy: just two interior benches with removable sections for the astronauts’ portable ventilator units. Over its 27-year career, the van’s wood-paneled interior began to look dated. A replacement was suggested, but the astronauts rebelled. 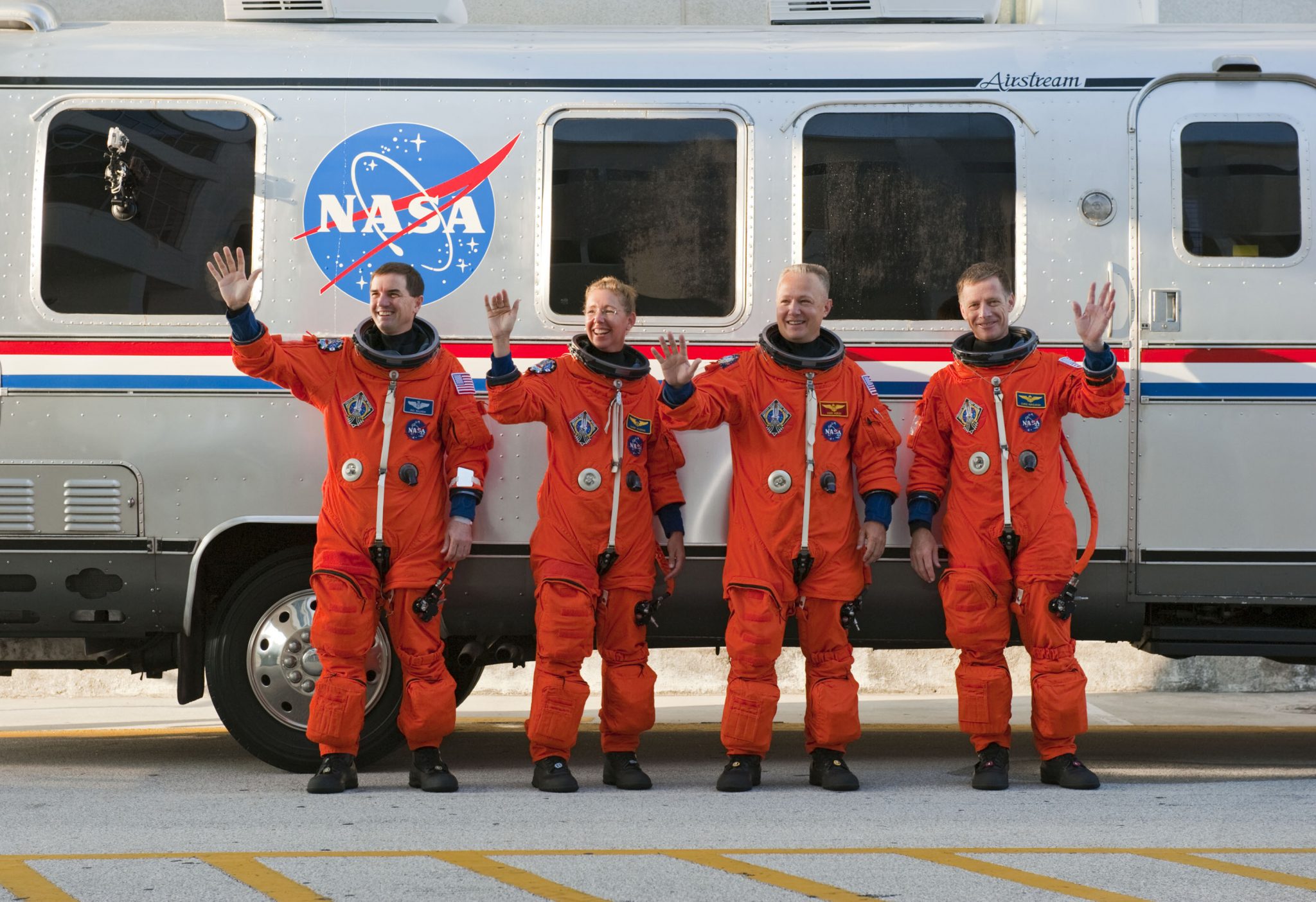 According to Commander Chris Hadfield, who commuted to work in a 1955 Ford Thunderbird while running International Space Station operations, astronauts are a superstitious bunch. They may be a highly trained, elite corps of scientist-explorers, but they have many rituals. For instance, everyone who launches from Baikonur Cosmodrome urinates on the right rear wheel of the bus that takes them to the launch pad, because that’s what Yuri Gagarin did in 1961.

The U.S. is no exception. Launching from the Kennedy Space Center traditions include a celebratory cake at breakfast (that no one seems to actually eat), and a round of poker where the mission commander absolutely has to get the worst hand. The Astrovan became part of the formalities, and because its duties involved little beyond an occasional 18-mile commute, it soldiered on for decades. According to NASA, five drivers handled shuttling duties, most of them long-term subcontracted employees. They were, effectively, the astronaut’s bus drivers.

The original Astrovan retired in 2011 and can now be found in the Visitor Center Museum at the Kennedy Space Center, alongside the earlier Clark-Cortez. When Kennedy rocket launches resumed, Airstream was, once again, the go-to candidate for astronaut transport. 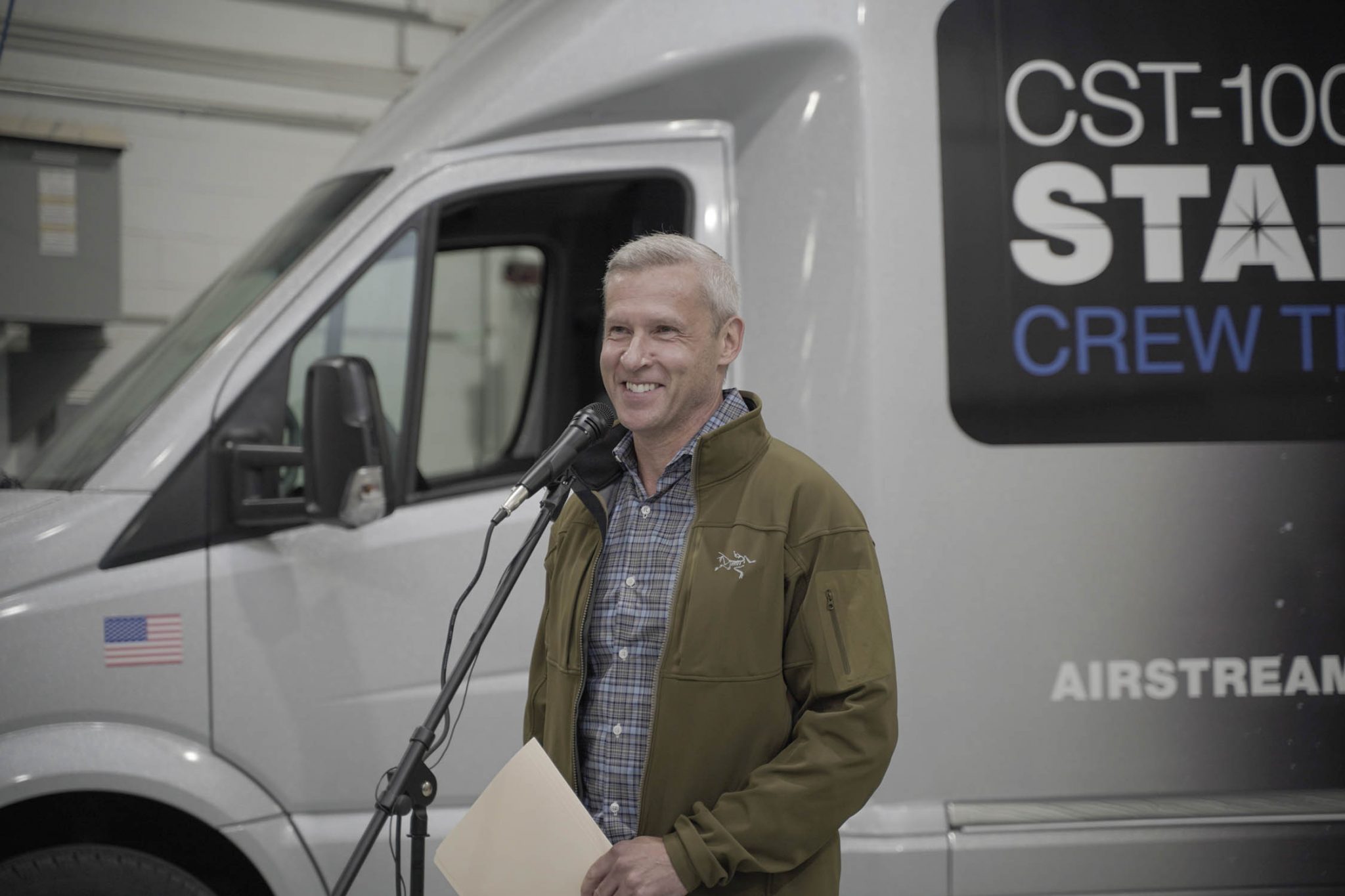 “Many of the people who worked on the new Astrovan are children of the Apollo and Space Shuttle eras—for some of them their first glimpse of an Airstream was the MQF or the original Astrovan heading out to the launchpad,” Wheeler says. “While we can’t all be astronauts, this project gave our associates an opportunity to be a part of history, and to tap into the excitement of launching rockets on a journey into space.”

As with the original, the brief for the Astrovan II was simple: Carry up to eight astronauts comfortably. Built from a modified Airstream Atlas Coach, the second-gen van did boast one notable technological improvement: improved telematics, designed to facilitate a video livestream of the short trip out to the launch pad. Beyond that, it is simply a roomy, comfortable van. 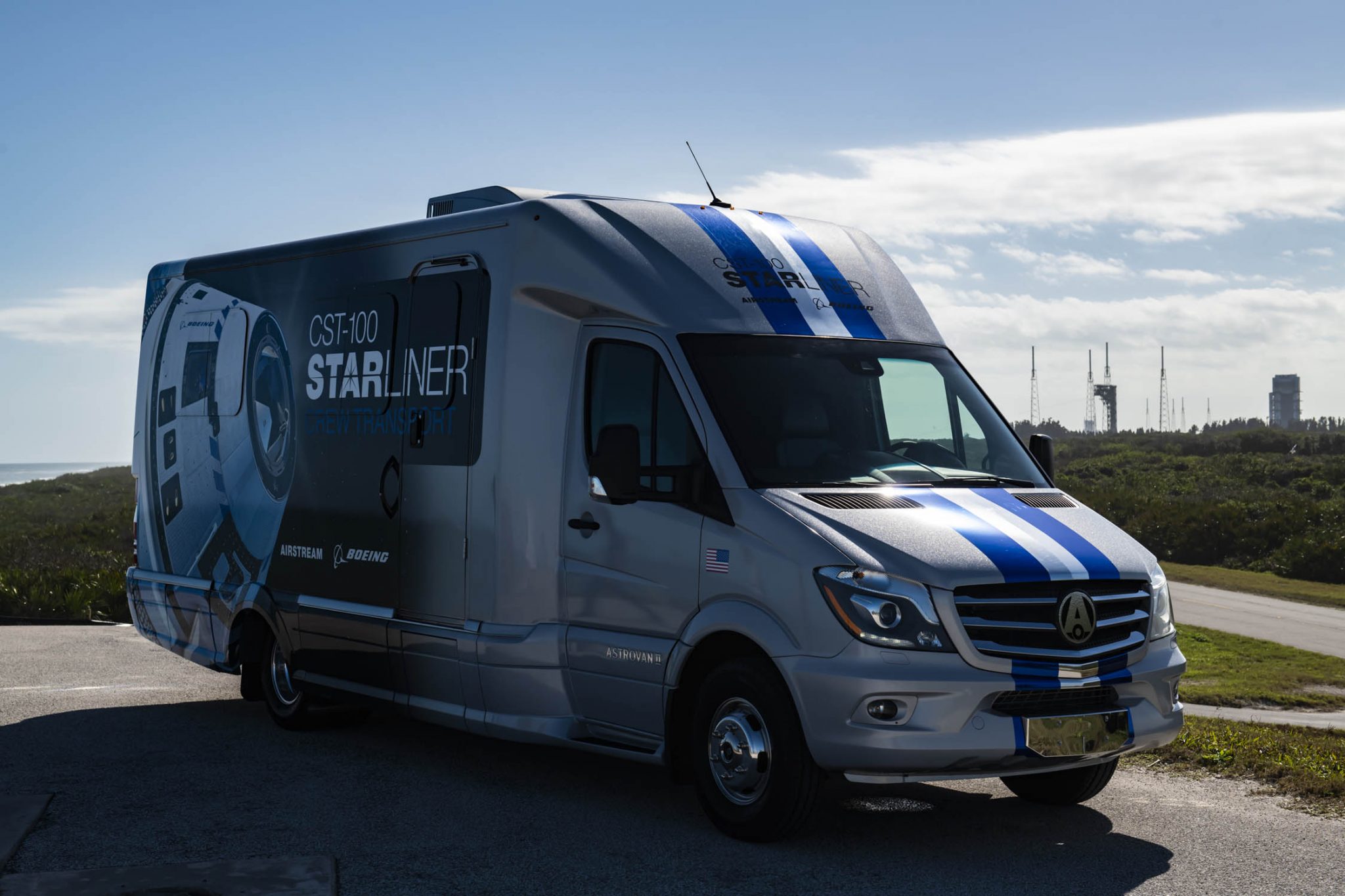 It’s unlikely that the astronauts will be wetting any tires on the Astrovan II. However, this new van will doubtless pick up a tradition or two as it ferries crews out to an increasing number of rocket flights. Ten or twenty years from now, it will be an artifact of American spaceflight, a humble machine made special by those it has carried, if only briefly. Some piece of fabric or interior panel will grow smooth from being touched for luck. The van will become part of the astronauts’ ritual, as Airstream intended from the beginning of its construction.

Airstream is a 90-year-old company, still making its instantly-recognizable travel trailers in its Jackson Center factory in Ohio. It employs about five hundred people. It has a historian, and a small museum. Airstream an old, well-loved company, and its employees are proud of what they’ve done. Before the final aluminum sheet was placed on the Astrovan II’s interior, all the team members who helped to build the van signed the back panel. The autographed panel was then covered up and the Astrovan II sent off to live its new life in Florida. 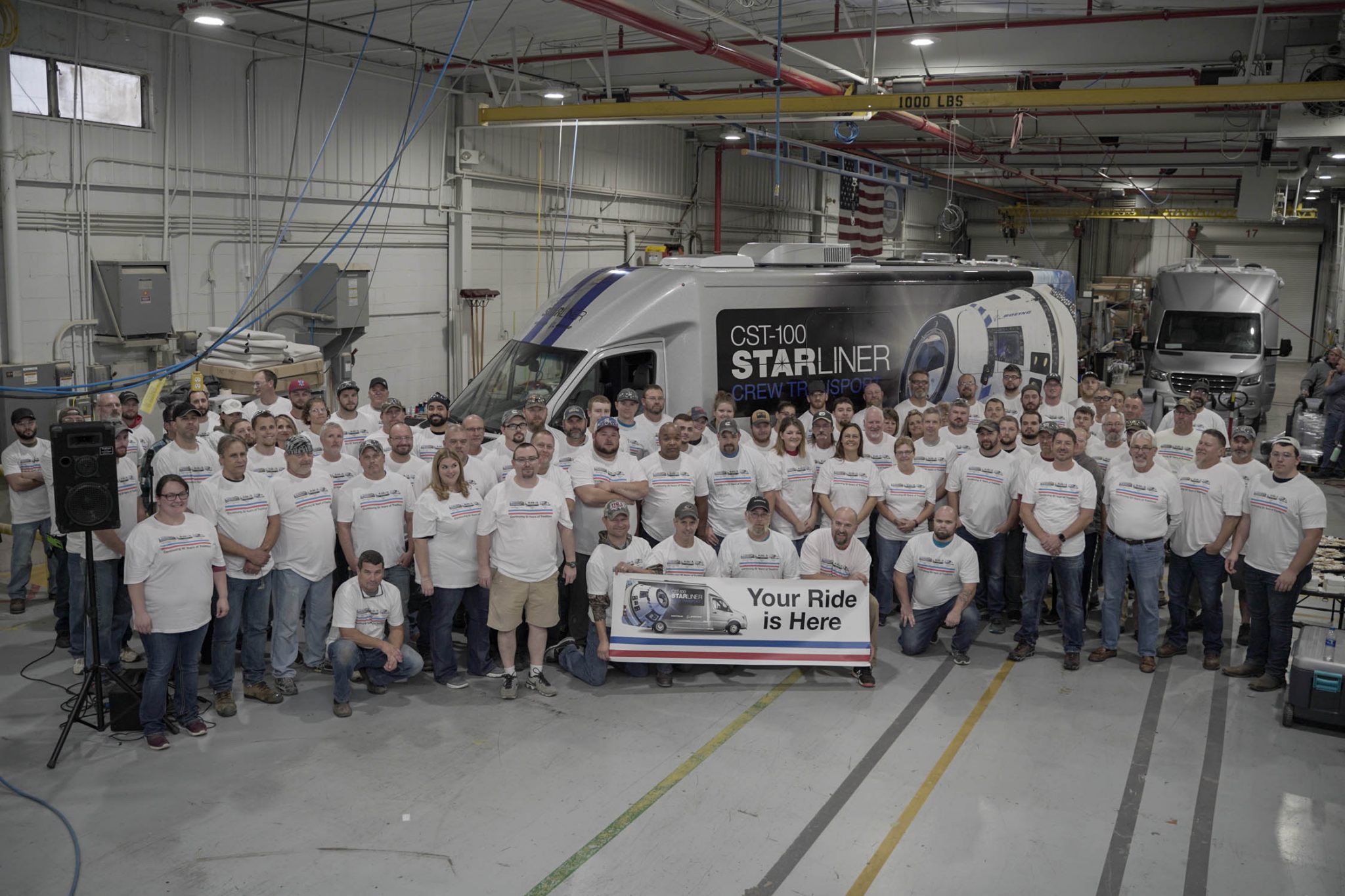 One day, astronauts will again board an Airstream, rumbling towards an Atlas V rocket capped by the Starliner reusable capsule. Behind those astronauts, unseen and hidden, will be the goodwill of ordinary people who make things in Ohio.

Like its predecessors, the Astrovan II carries astronauts only a small fraction of the distance they must travel, but it is still a part of the journey—a journey that, each time, brings together human ingenuity and resolve into something like magic. 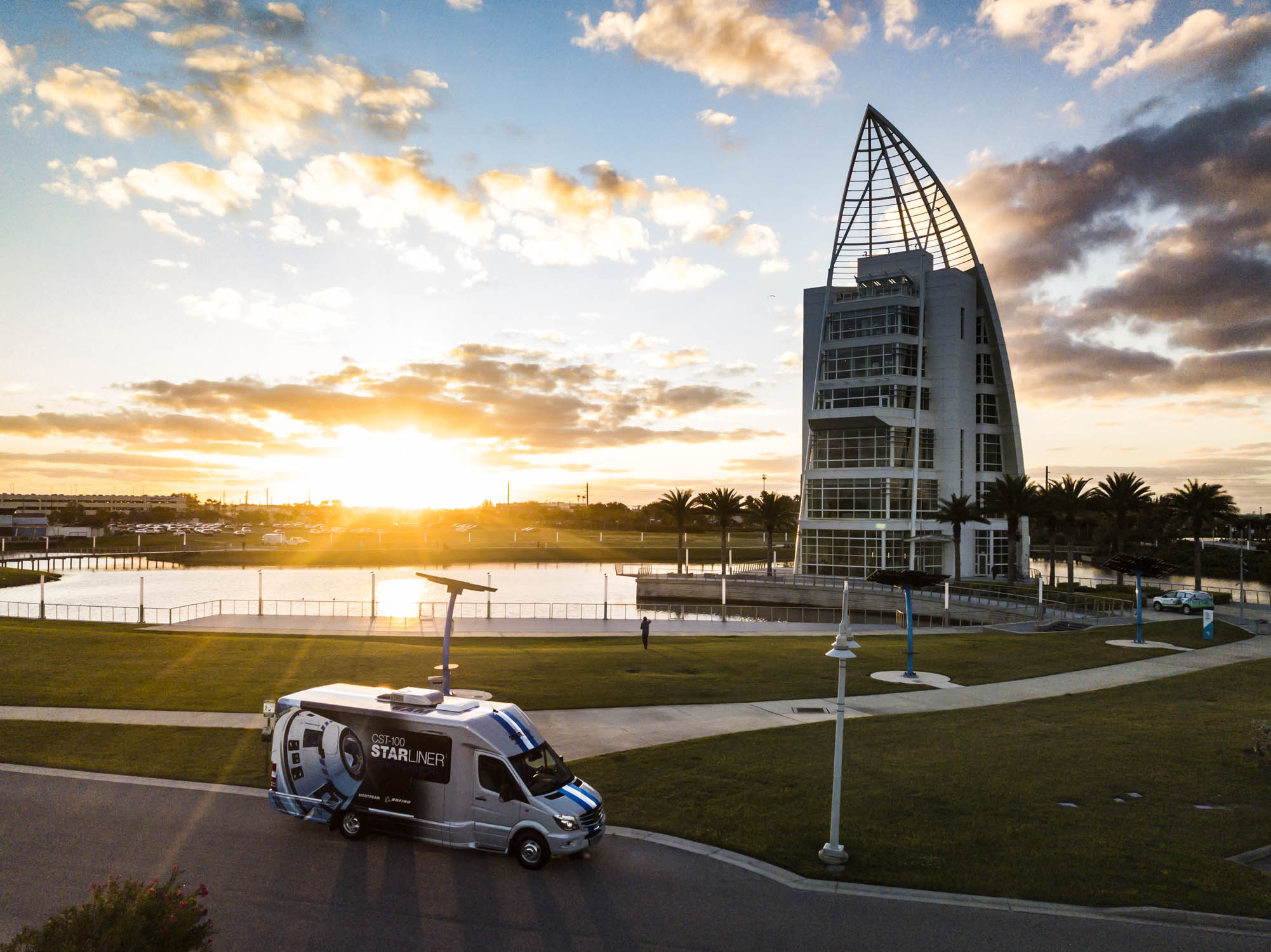