In an 80-second campaign spot posted on Biden's Twitter account Wednesday, Biden surprises viewers by not talking about politics but cars, and his love of the Corvette and the American car market. In it, he says, "They tell me" that GM is making an all-electric version of its iconic sports car that will go 200 mph.

Turns out there are plans. Someone familiar with Corvette production at its Bowling Green Assembly in Kentucky confirmed to the Free Press there is a plan for an all-electric version of the Corvette, but the timing and its maximum speed are unknown.

The electric version is likely at least two years or more out, the person said, noting it will follow GM's performance versions of the car due to market over the next year. The person declined to be named because there was no authorization to speak to the media.

But GM has said it will have an all-electric lineup across its brands one day, with Cadillac being the lead brand for that technology. Cadillac's boss has said the brand lineup will be nearly all-electric by 2030.

GM did not plant any tip about an all-electric variant of the Corvette in Biden's ear, said Jeannine Ginivan, GM spokeswoman.

"I don't know who 'they' are who told him that, but we don't have any news about any new electric Corvette," Ginivan said, reiterating that GM does not discuss future product. "We are excited about the line of vehicles we have coming. We have the GMC Hummer electric pickup and tonight the Lyriq (SUV) reveal." 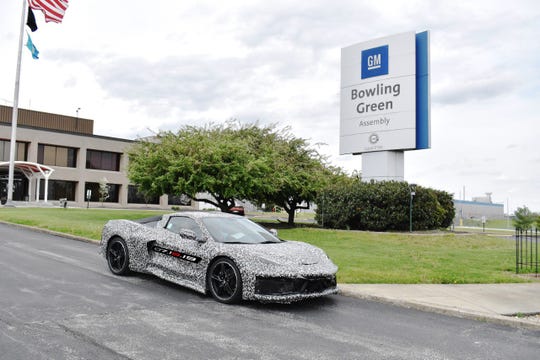 The GMC Hummer electric pickup will be built at the Detroit-HamtramckAssembly Plant. It is due out late next year. GM has not said where it will assemble the Cadillac Lyriq SUV, which will be revealed at 7 p.m. Thursday.
GM first saw Biden's spot when he tweeted it out Wednesday, Ginivan said.

"We were surprised to see the video and that he is as excited about electrification as we are," Ginivan said, adding they were pleased he promoted American-made cars.

Biden teased the spot with a tweet saying, "There’s been a lot of talking about my vetting process, here’s an inside look."

The spot, called "America is Making a Comeback," is paid for by the Biden for President campaign. In it, Biden gets behind the wheel of his classic C2 Corvette convertible showing off his driving skills.

"I like to drive. I used to think I was a pretty good driver," Biden says as the car's engine roars and he speeds away.

"I didn’t get a chance to flat-shift into second, I was afraid I’d go through those guys," Biden then says, laughing. "I love this car, nothing but incredible memories. Every time I get in it, I think of my dad and Beau. God, could my dad drive a car."

In the spot, Biden walks around his car pointing out its best features, before saying, "This is an iconic industry. How can American-made vehicles no longer be out there? I believe we can own the 21st Century market again by moving to electric vehicles. And by the way, they tell me, and I’m looking forward to — if it’s true — to driving one, they’re making an electric Corvette that can go 200 mph. You think I’m kidding? I’m not kidding. So I’m excited about it."

Industry observer John McElroy, host of Autoline, said the spot is "a sign of the times" to see Biden talking up electric cars while sitting behind the wheel of a classic C2 Corvette convertible.

"That’s the dilemma the auto industry finds itself in now," McElroy said. "Sales of pickups, SUVs and performance cars are the only thing keeping the industry alive right now, but regulations are forcing them to pour most of their resources into electrics."