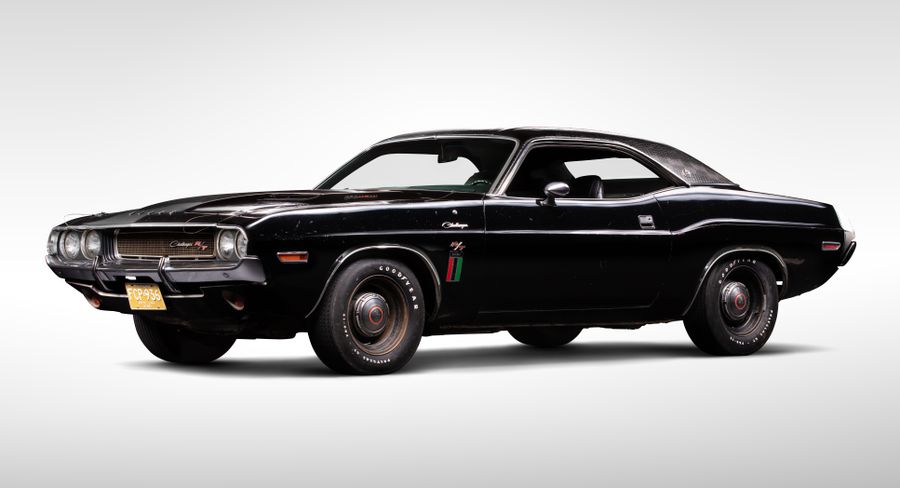 Photos by Preston Rose, courtesy the Historic Vehicle Association, except where noted.

Winter's last grip on Detroit had started to loosen. Little by little, the slush piles at the edges of parking lots and the last few pockets of white in the corners of flowerbeds had receded, replaced by shoots of life anew - buds on the trees, green on the grass, a few more minutes of sun every day. Gregory Qualls stood in front of the garage door at his father's house once again, this time with only the memories of his father on the other side of the door, memories wrapped up in a black unrestored Hemi-powered 1970 Dodge Challenger R/T SE that had sat for nearly 40 years.
"I did get a chance to ride in it," Gregory said. "I remember it was so loud, it'd shake the whole entire house, even inside. I asked my mom what that noise was, and she said, 'Oh, it's just your dad starting the car.' He then said, 'C'mon, let's take a ride.' He took off and the car pulled me back into my seat. I was so scared, but it was something I'll never forget." 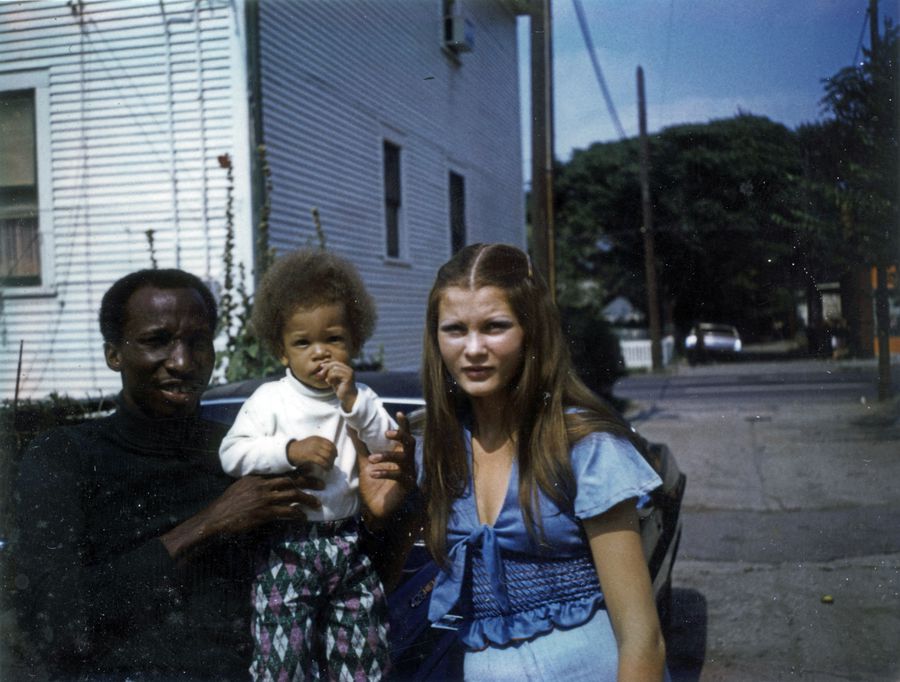 Godfrey, Gregory, and Kathy Qualls. Photo courtesy Gregory Qualls.
Though the Challenger predated Gregory by a few years and definitely meant something important to his father, to Gregory it was just a big, black, menacing background presence that rarely left their East Side garage. His father might have spoken at length about the car with Gregory's uncles, but Godfrey Qualls rarely spoke about with his son. Still, Gregory knew that his father loved the car, even after he put the car up on blocks in the garage, covered it with horse blankets, and instead turned his attention to helping Gregory build and race remote control cars then later build Gregory's own hot rods to prowl the streets of Detroit.
Three months before 42-year-old Gregory found himself in front of that garage door, just a few days before Christmas, he arrived at the hospital with a thick envelope in his hand. His father had beat cancer once before, but now it had returned, and there was little left for Gregory to do now other than attend to his father's last wishes. He'd found the envelope exactly where his father said he would, and dutifully handed it over. Godfrey opened it and pulled first from it some brochures for the 1970 Challenger. Then his original order sheet and receipts for it. Then the build sheet, then the registrations for it. And finally, the title, which he handed over to Gregory.
"He said he wanted me to have the car, just not to get rid of it," Gregory said. "He just smiled, and that was the last time I saw him happy."
Godfrey Qualls died on Christmas Eve 2015 at the age of 73. His obituary spoke of his time in the Army (82nd Airborne) and National Guard. Others at the funeral fondly remembered the man who served 37 years as a police officer in the Detroit Police Department. Whatever importance the Challenger had been to him, Gregory put it aside. "I didn't want the car like this, with him dying," he said. Yet the stories that started to bubble up about Godfrey and the Challenger over that winter - stories about a mysterious street racer in an all-black Challenger - kept his father's last gift to him from fading back into the background. 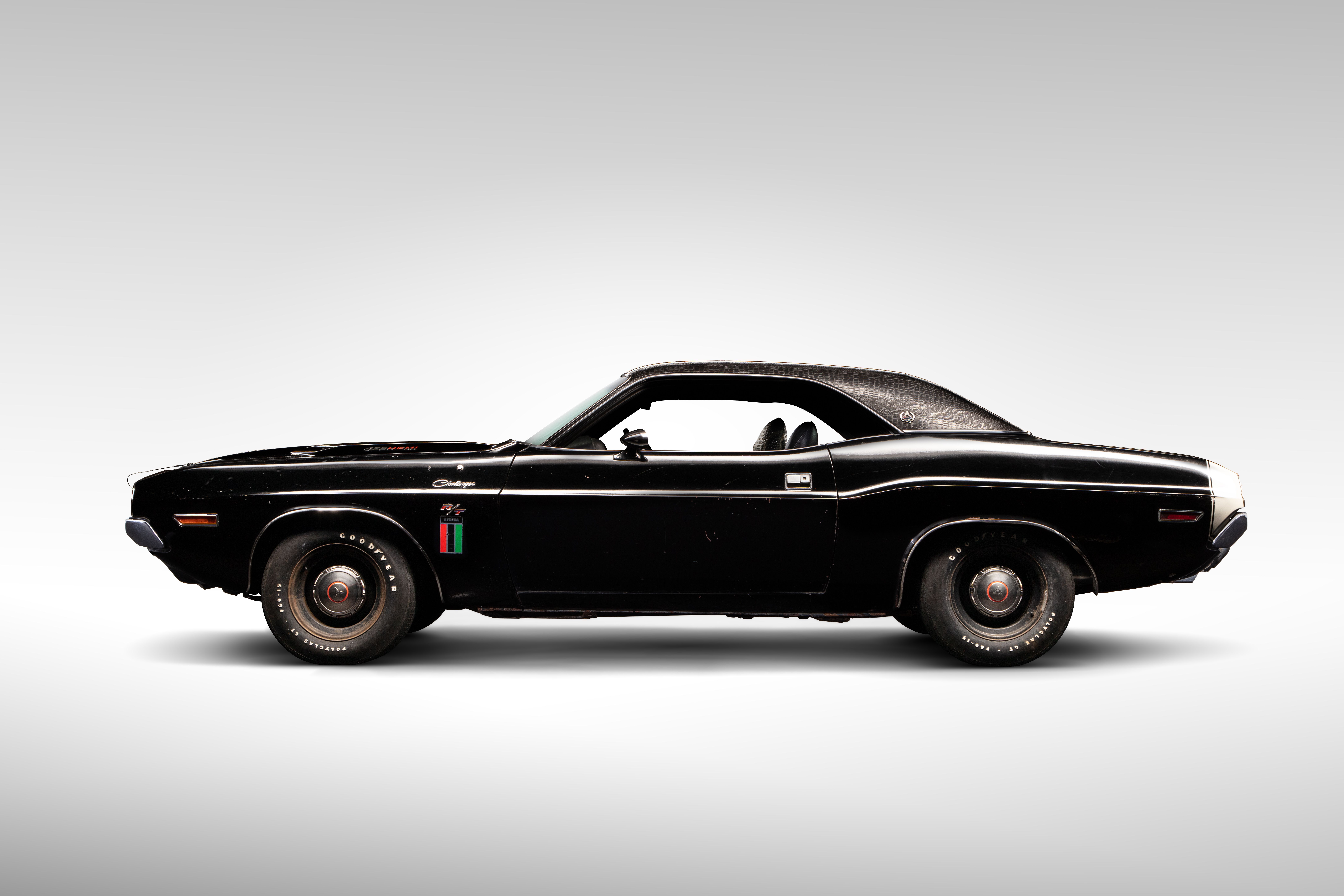 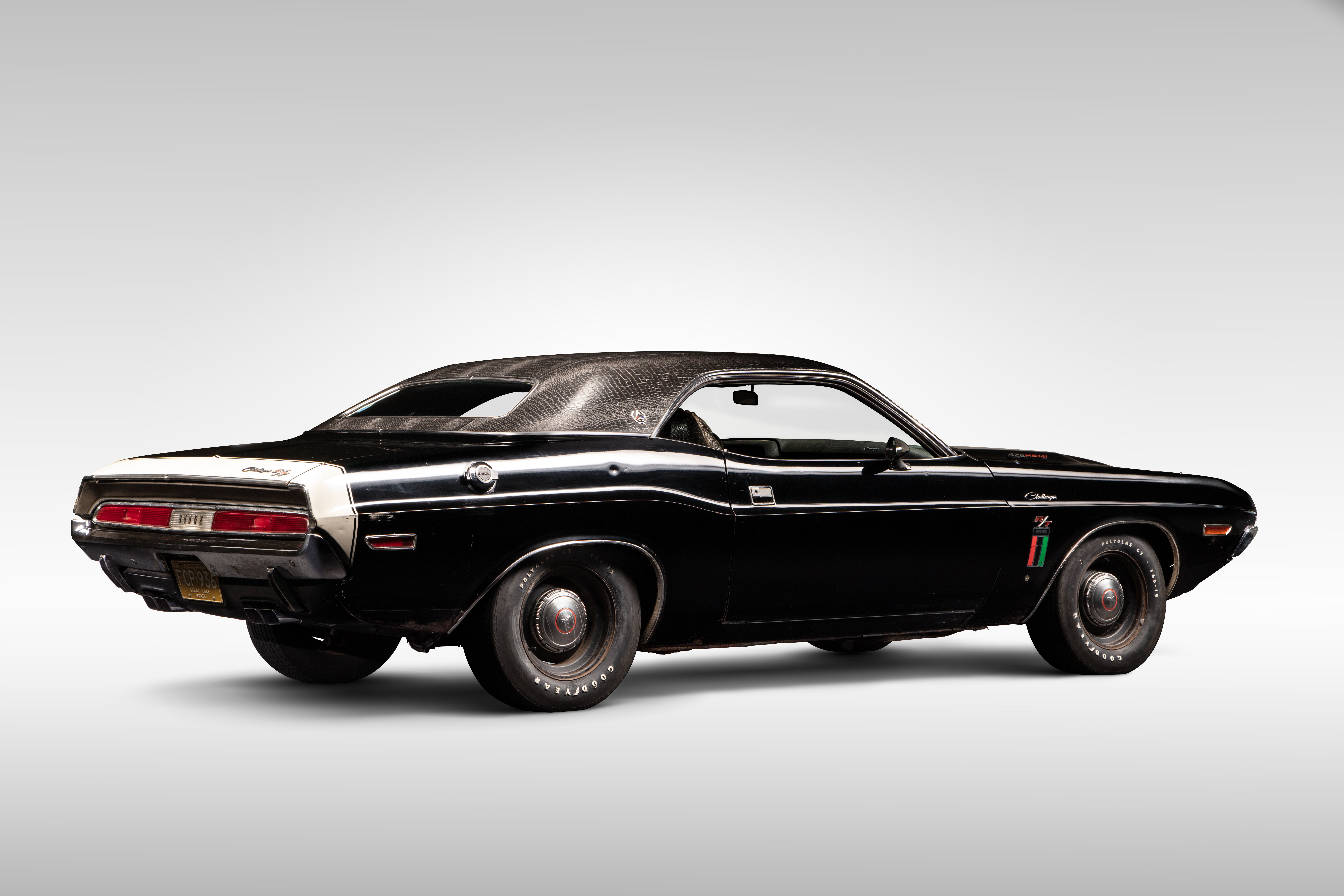 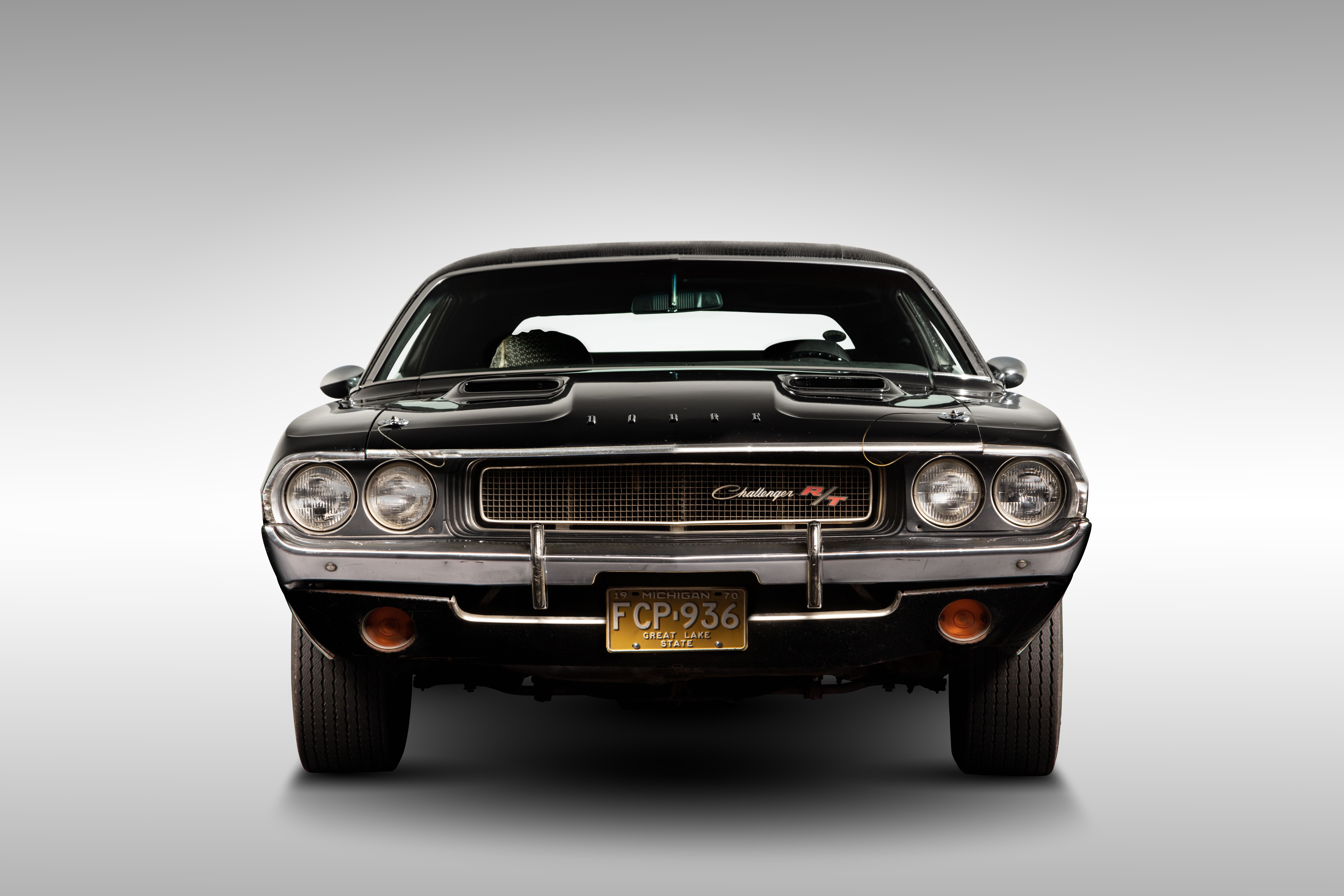 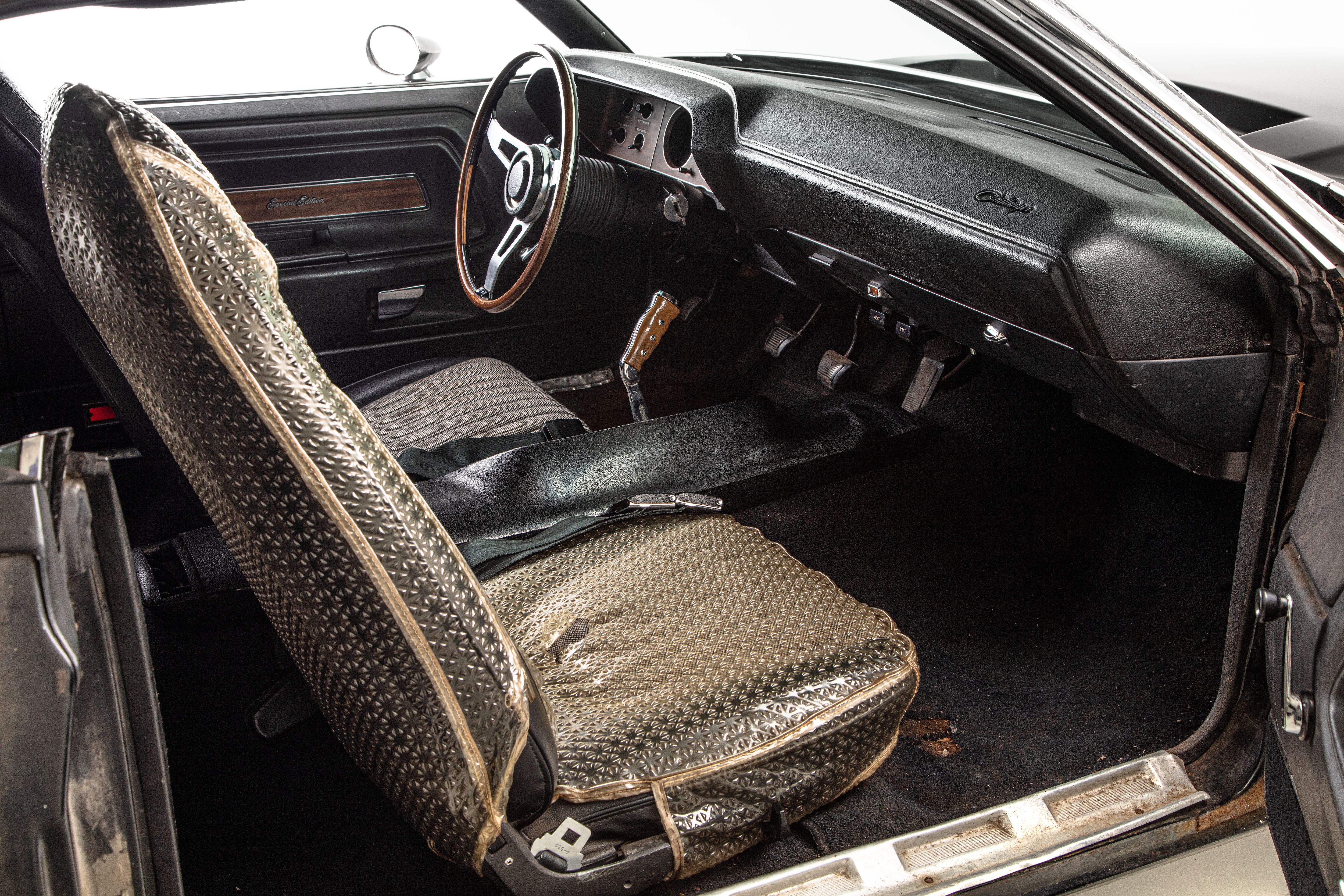 Gregory started to do some research. According to the window sticker, his father ordered the Hamtramck-built Challenger (VIN JS29R0B193271) from Raynal Brothers Dodge on Chalmers Avenue in Detroit as a Hemi four-speed car with the A34 Super Track Pak with 4.10 gears, J45 hood pins, S83 Rim-Blow steering wheel, R35 multiplex AM/FM stereo, V1G Gator Grain vinyl roof, and the V9W white bumblebee stripe. Along with a host of other options, the total came to nearly $5,300. Yet according to the order sheet, his father also specified a Shaker hood. According to Gregory's uncles, when the car arrived without it, Godfrey threatened to sue either the dealer or Chrysler; he eventually got the hood assembly, but then never had it installed. 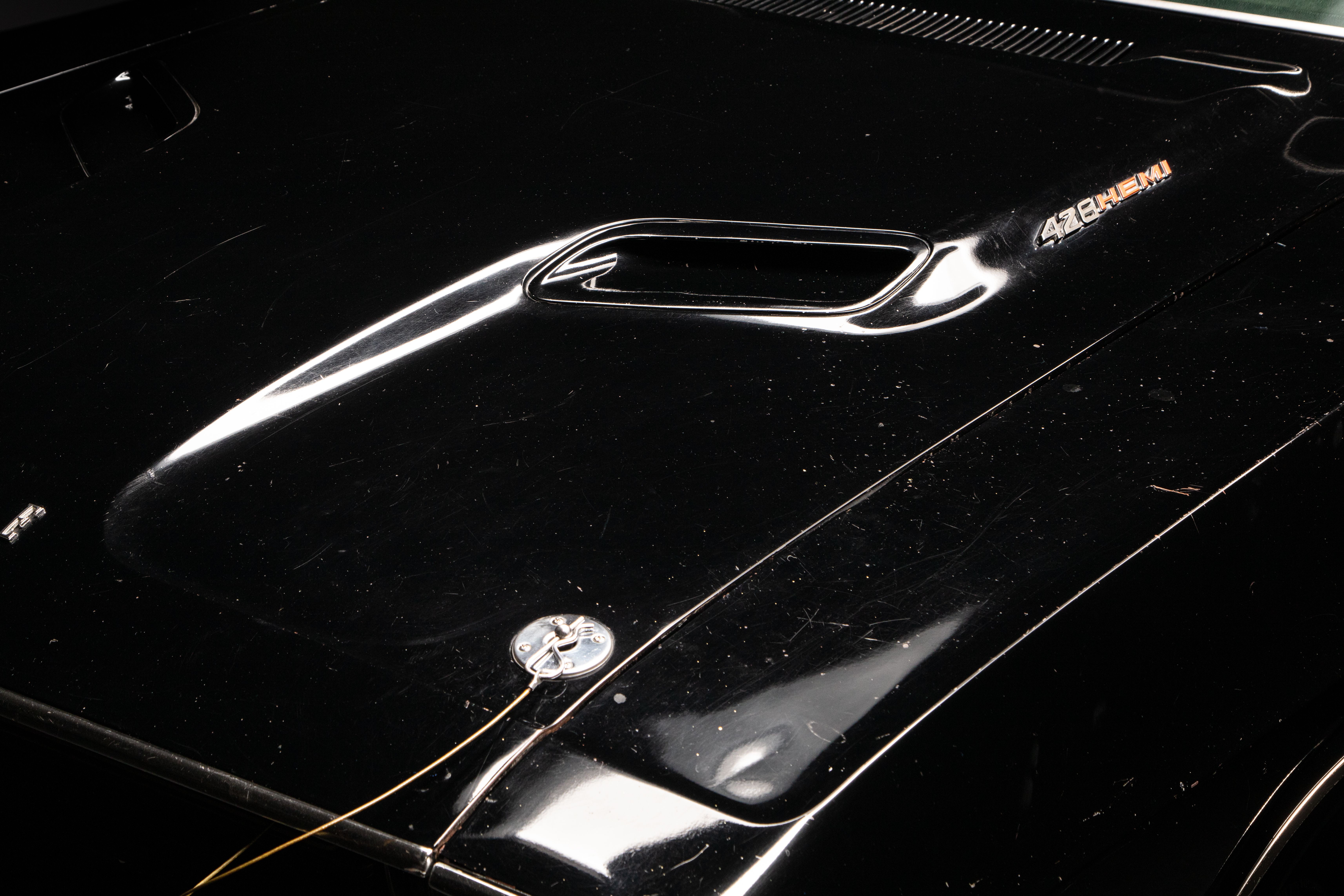 As Gregory's uncles also told him, Godfrey ordered the Challenger about a year after his brother, Cleolous, got a black 1968 Dodge Charger with a white stripe. Cleolous intended to race the Charger at the drag strip, so Godfrey egged him to get a Hemi; only after Cleolous decided on the less expensive 440 did Godfrey decide that he'd get a Hemi and that he'd prove its mettle not on the drag strip but on the street.
If the timeline that Gregory pieced together is accurate, his father ordered the Challenger after entering the police academy but before becoming a full officer in the police department's 11th Precinct, at one point assigned to traffic enforcement. But among the secretive world of illegal street racing, Godfrey Qualls raced not as some sort of proto-Brian O'Connor undercover cop, looking to make some busts, but as a regular gearhead looking to take down the competition, who could take few chances at getting caught.
"I'm pretty sure he'd have lost his job if his superiors found out," Gregory said. "They wouldn't take kindly to that." 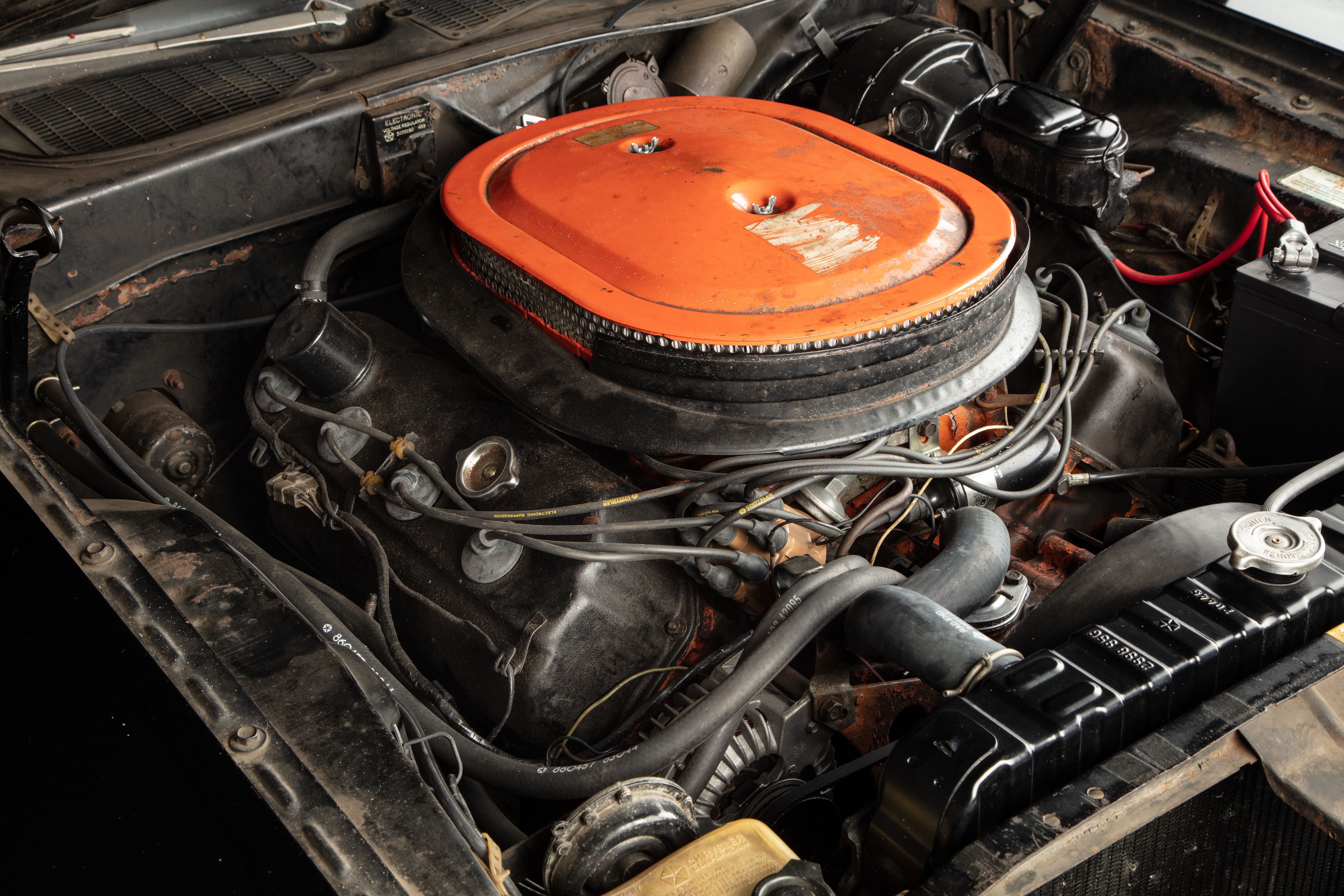 To keep his hobby secret, according to Gregory, his father only occasionally ventured out for a race. The Challenger thus became a sort of urban legend among the Detroit street racing crowd, a car that would show up on Telegraph or Woodward or Stecker Street to dominate, then disappear for months at a time. "That's what made it so mysterious," Gregory said. "Everybody apparently called it the Black Ghost."
Somehow, Godfrey put more than 45,000 miles on the Challenger over the few years the Black Ghost haunted the streets of Detroit. And perhaps more amazing, he never once blew the engine, judging from the numbers-matching drivetrain still in the car. It probably helped that Godfrey didn't go wild with modifications to the Challenger: Other than keeping it in tune, he ran the car sans mufflers, with an aftermarket coil, and with 11-inch slicks he borrowed from his brother-in-law. According to one uncle, the Challenger never even needed a clutch. 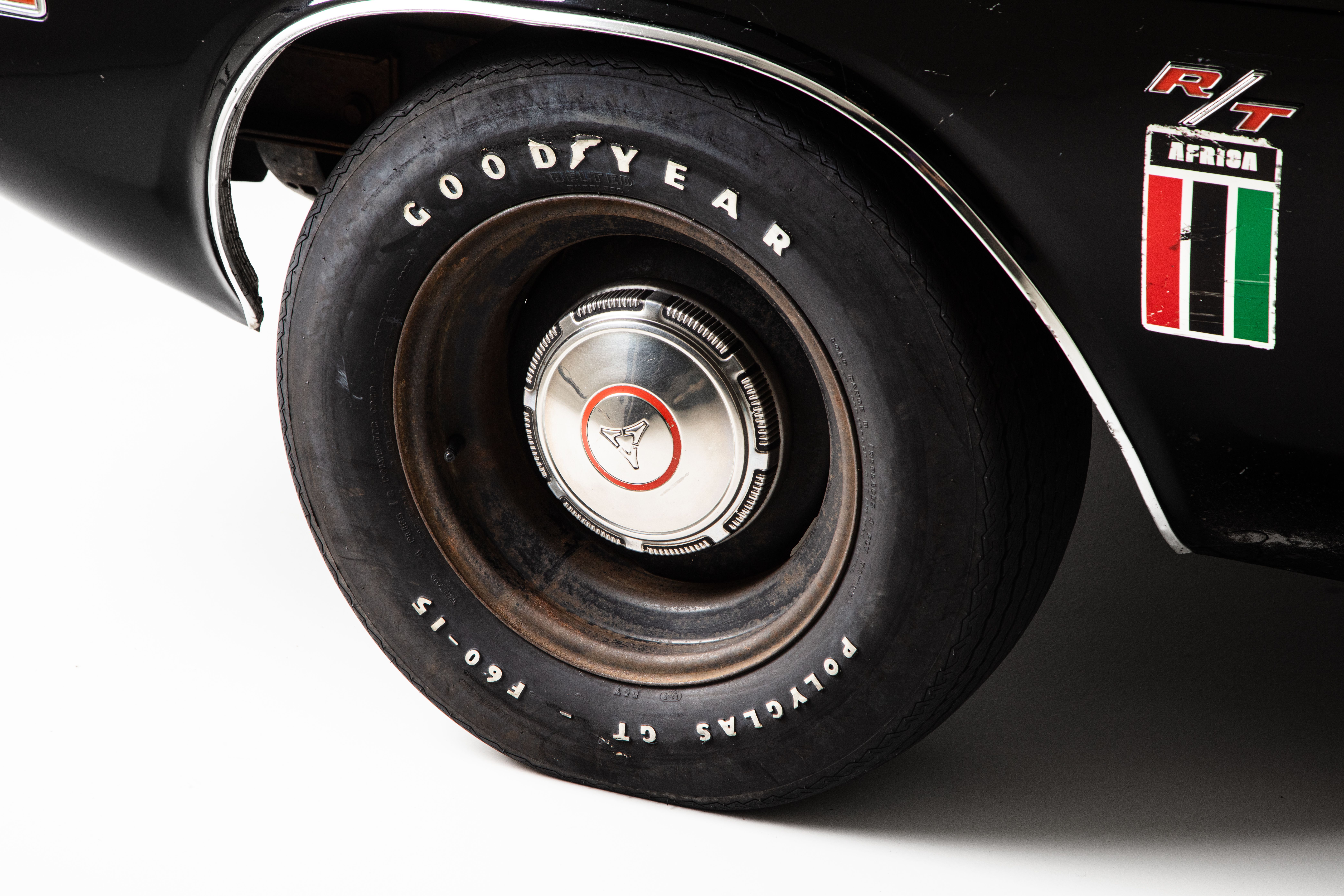 (The keyed kill switch on the front fender was apparently a dealer accessory. The Africa stickers arose from the "Zulu warrior" nickname that his Army buddies gave him. "I guess it was a black pride thing, a real 'I'm a badass' thing," Gregory said. The trailer hitch was for towing the motorcycles that Godfrey rode - Nortons, a BMW, then later a Harley.)
Gregory looked around him. His father had left the house to Gregory's brother, left some money to Gregory's sister. Only he had shared his father's enthusiasm for fast cars. In those last few years, his father had spoken with him about getting the Challenger down off its blocks, getting it out of the garage, and maybe restoring it before taking it to some car shows. It took some time to process how he'd gotten here.
Eventually, he opened the garage door and carefully pulled down each blanket covering it. He wiped the dust that had accumulated on the car's surfaces despite the blankets. He opened the trunk to find the NOS parts that his father had slowly accumulated in hopes of getting around to that restoration. He thought of his father's smile as he handed over the title. He thought of all the stories his father never told him about the car. 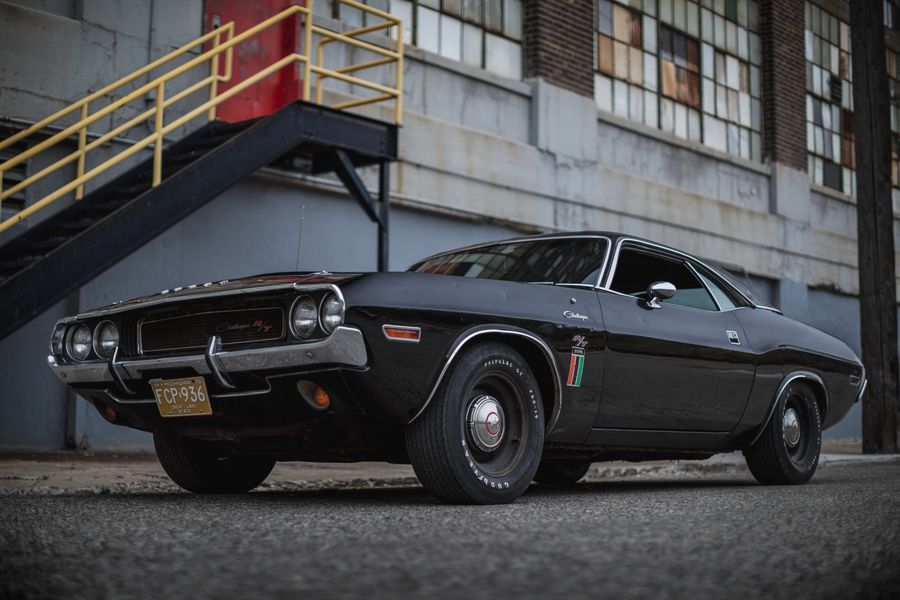 Photo by Casey Maxon, courtesy Historic Vehicle Association.
If Gregory couldn't sell the Challenger, as he promised his father, he could at the very least get it moving under its own power again, renew it just as the world was renewing itself around him. He took the Challenger home and, with the help of a few friends, went through the car to determine what it would need. "Everything looked pretty decent, not corroded like we expected it to be," he said. Still, they had to change all the fluids; replace the belts and hoses; swap out the Tiger Paws that were on it for a set of reproduction F60-15 Polyglas GTs; rebuild the brake booster and carburetors; and install a new radiator, clutch fan, and master cylinder. "We didn't want to take any chances - we wanted to make it safe and drivable." 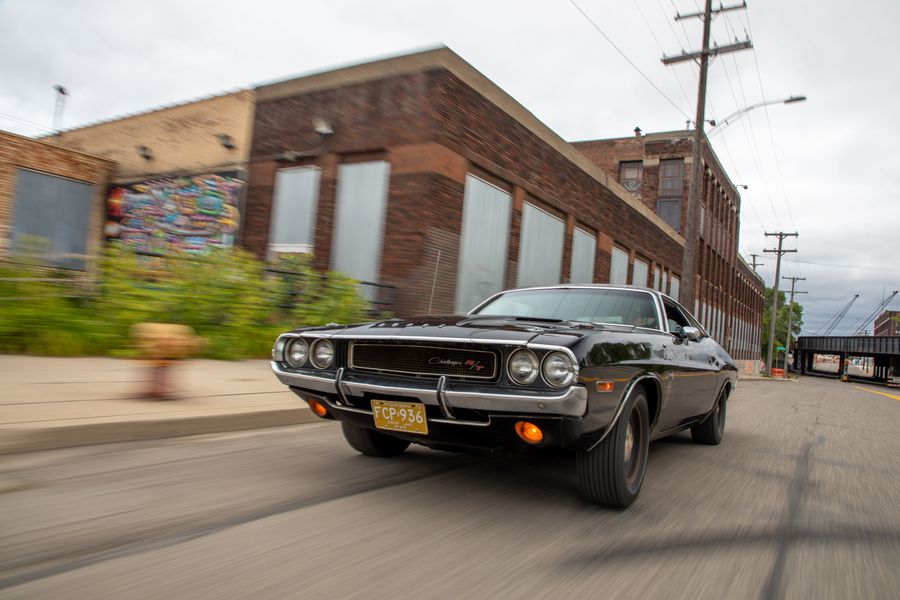 Photo by Casey Maxon, courtesy Historic Vehicle Association.
Safety, Gregory realizes now, was likely the reason why his father never told him much about the Challenger. "He probably didn't want me to get into trouble," he said. "I always wanted to go fast too." And he didn't need any inspiration to go faster.
By July of 2017, Gregory was ready to show off the Challenger to a small group of family and friends. And he was ready to drive the car that had once scared him plenty. "I wanted to see what Dad talked so much about, why he loved it so much," Gregory said. "And I get it now, it's a lotta fun. You can feel the power - it puts you right back in the seat. Sure, new cars can go fast, but it's not the same. They just go, but this car's always halfway on the edge - if you hit it too much, it'll go sideways. Maybe that's part of the excitement." 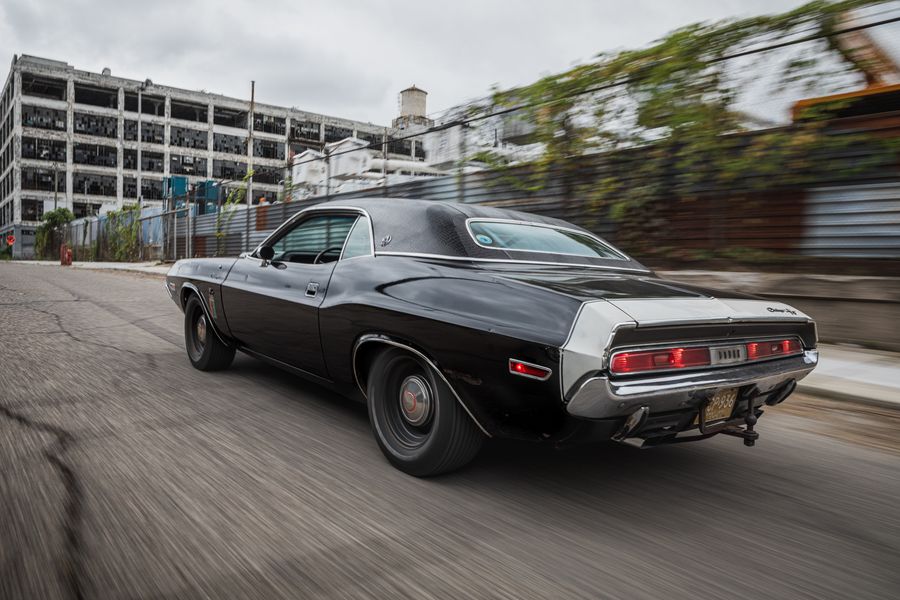 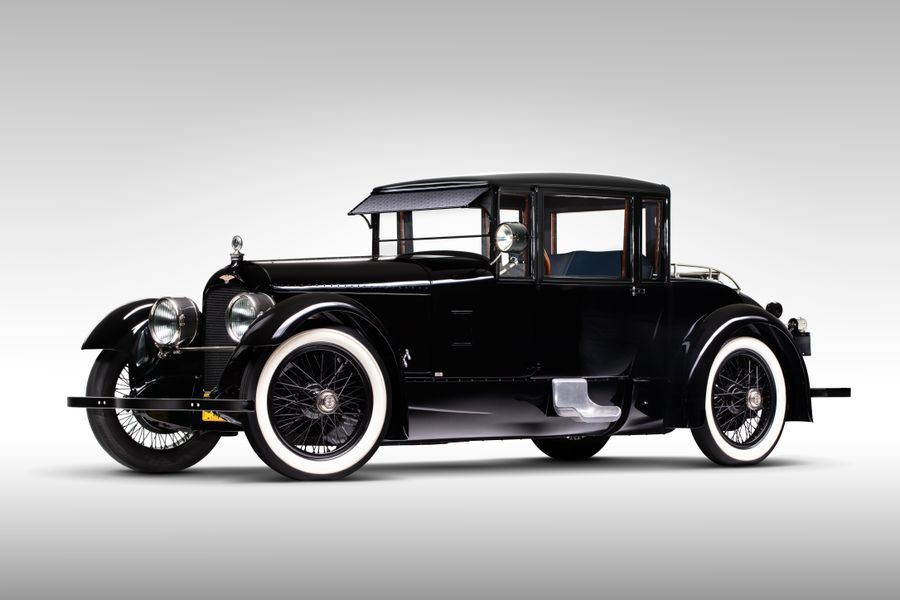 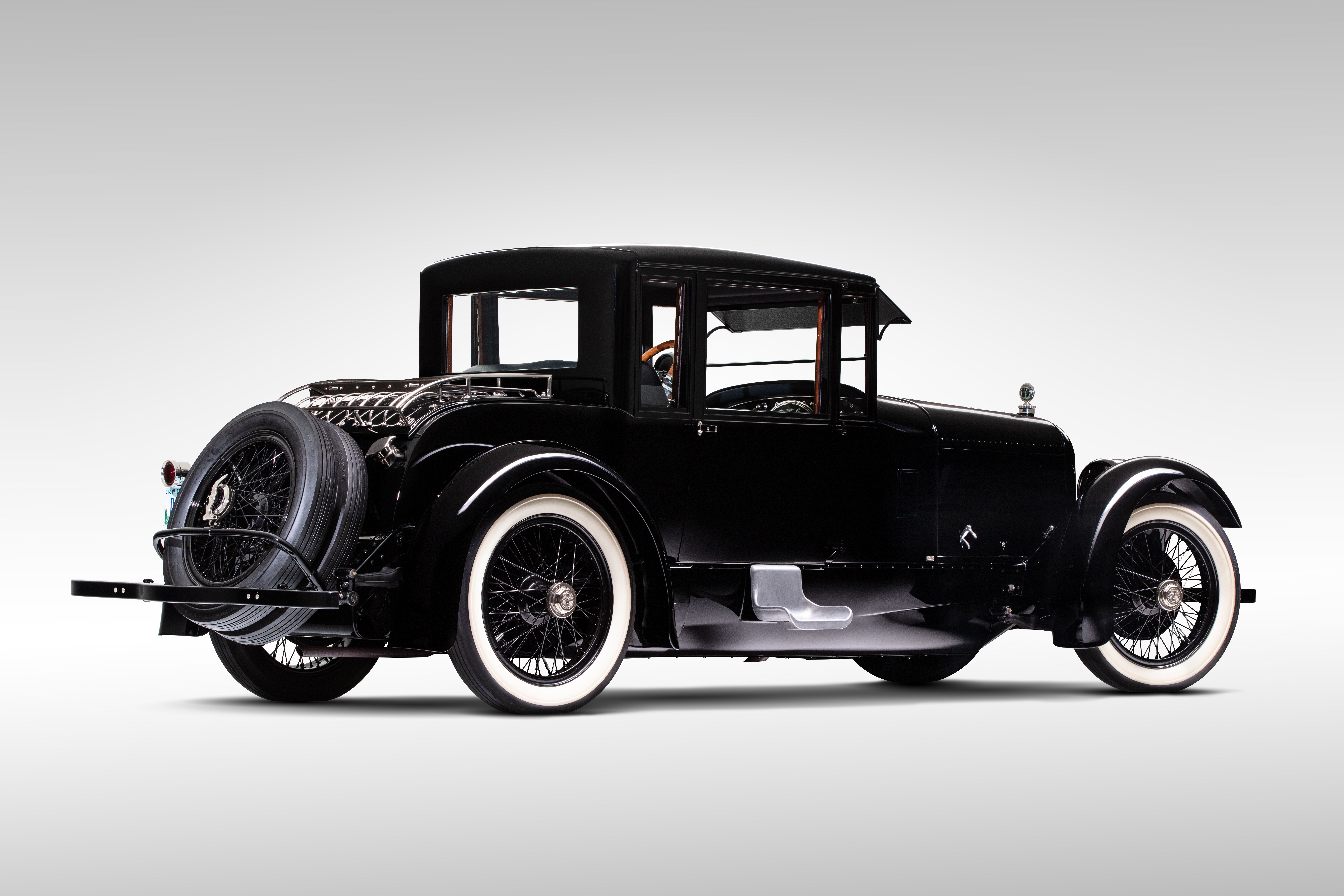 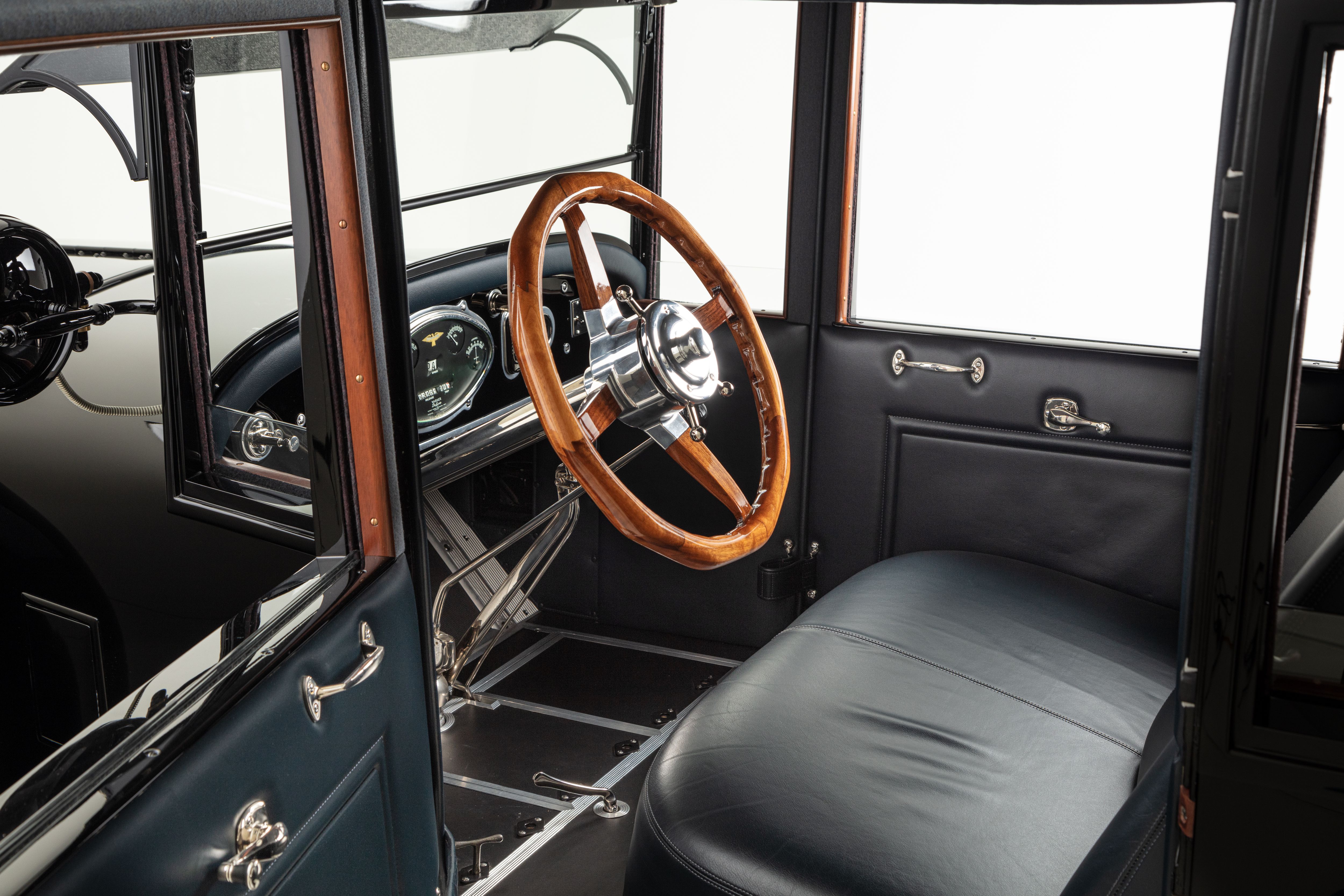 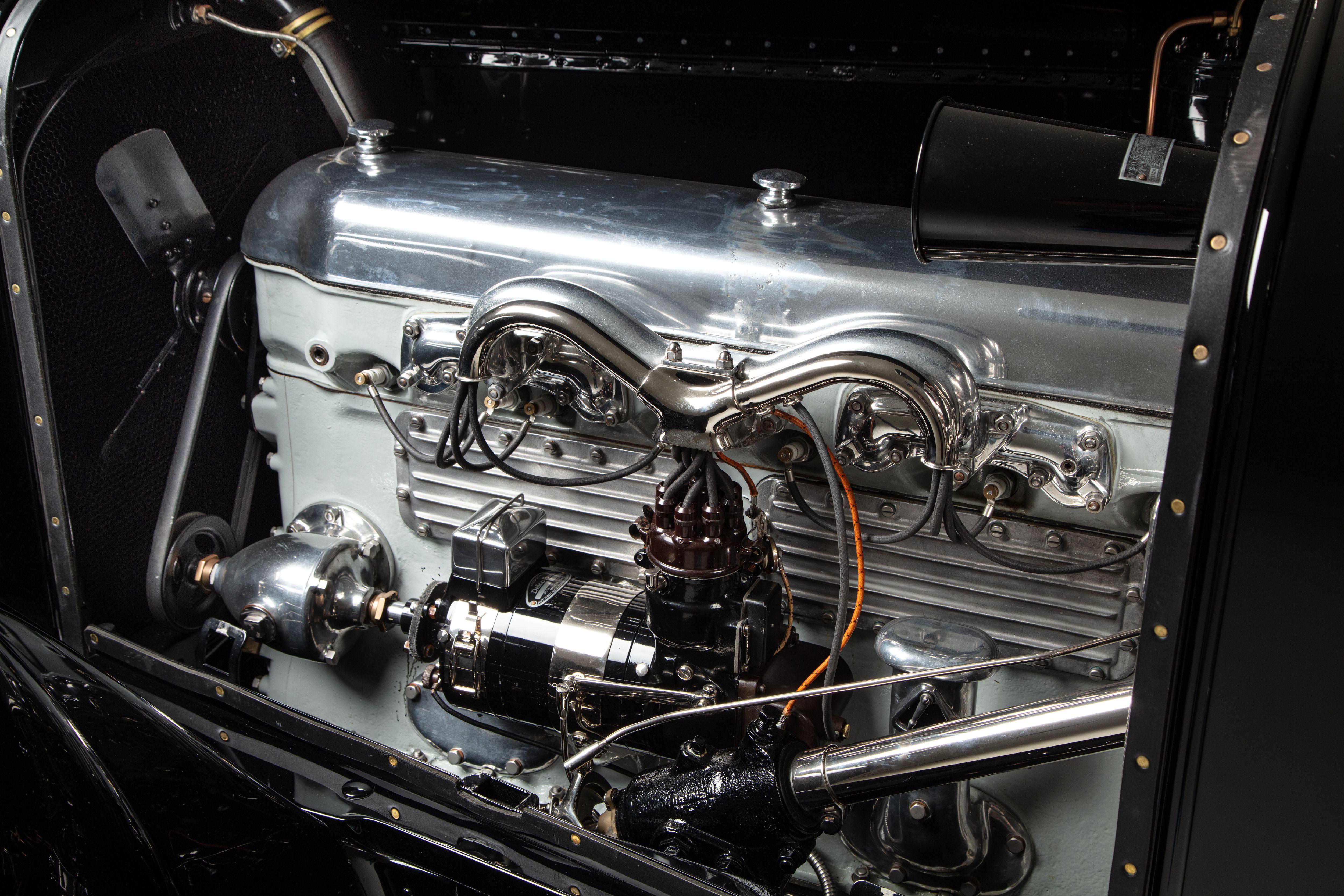 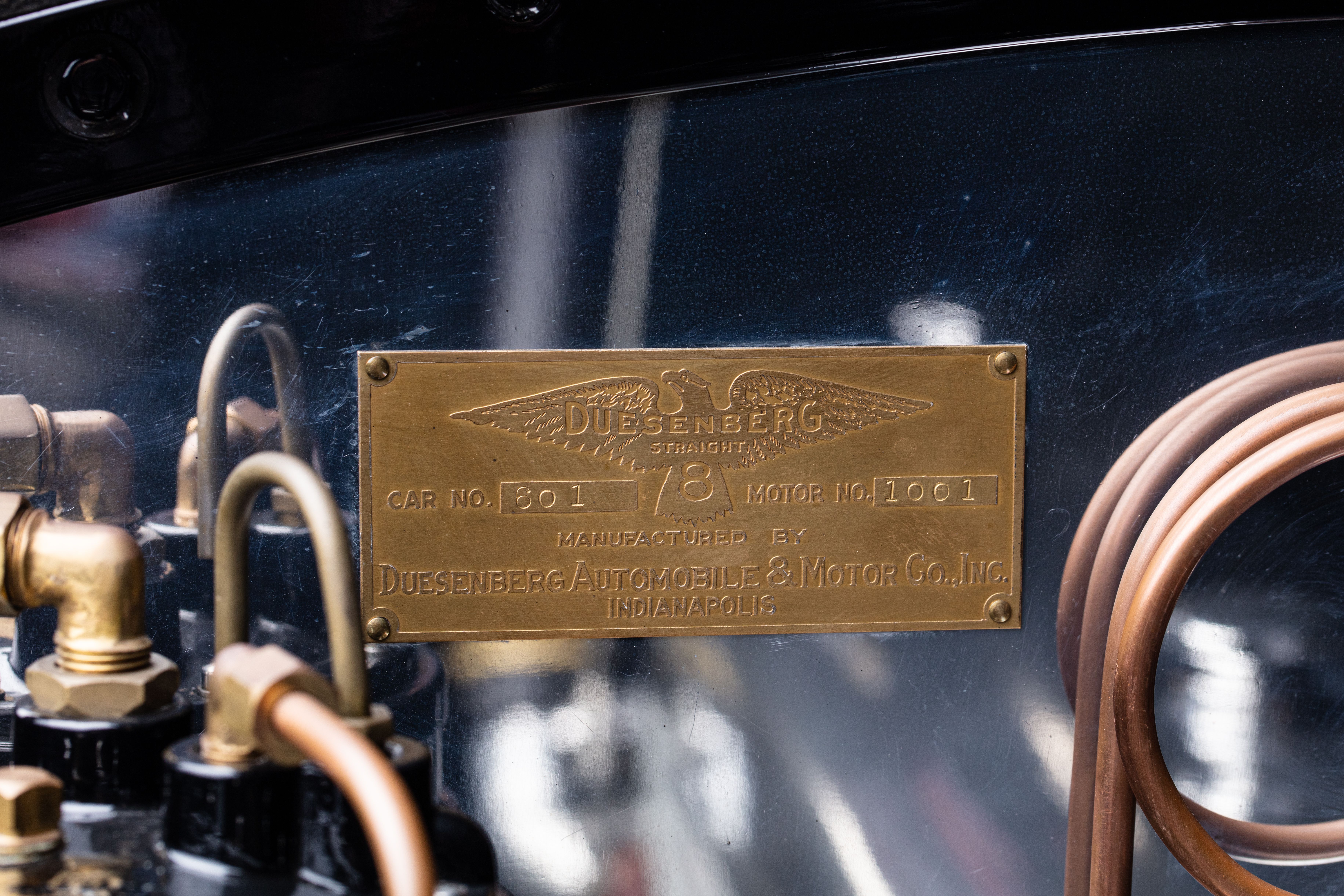 Alongside the first Duesenberg Model A - another car that remained in its original family until recently - the Challenger is one of two cars the HVA will add to the register this year. Selection to the register involves a complete documentation of the vehicle, including a fully referenced narrative of the vehicle’s provenance and full photography, which will then be placed in the Library of Congress. No restrictions are placed on subsequent use or sale of the vehicle. The HVA has placed more than two dozen other vehicles on the register since it was established in March of 2013.
With his mission accomplished, Gregory wouldn't say that his connection to his father is that much stronger because "we always had a good solid foundation to begin with. We just got along real good. For me, I miss him a lot, so it's important to have a piece of his legacy."
A legacy that, he hopes, he'll be able to pass down to his own son someday, complete with all the stories.
SOURCE: HEMMINGS
← Go Back To List