2021 Ford Bronco: Get the Inside Story Before the Official Reveal

The new Bronco, with its body-on-frame construction, retro looks, and removable doors and roof, is shaping up to be exactly what you're hoping for.

Who has the harder job: a Disney producer assigned to the Star Wars franchise or a Ford engineer tasked with creating the new Bronco? Successfully modernizing a timeless classic means running a razor-thin line between blasphemy and anachronism. Basking in the warm, rosy glow of nostalgia, legions of die-hards with opinions cemented over decades stand ready to crucify the final product if anything is amiss.

"Our renderings include a bit of imagination, but we're confident that the tires will be big, the body will be boxy, and the roof will be removable."

It's been 24 years since the last Ford Bronco rolled off the assembly line, giving zealots plenty of time to ruminate on the iconic nameplate and what it means to them. Bronco nostalgia is arguably more powerful now than it's ever been. The name carries so much weight that Ford cannot afford to apply it to just any SUV. There are certain elements that simply must be part of the package, or else the new Bronco's legacy will be about as respectable as George Lucas's godawful prequel trilogy.

Since word of a Bronco revival leaked a few years ago, we haven't been all that optimistic. The Ranger pickup's anticlimactic return to the U.S. wasn't a good omen. The truck we got was a mildly warmed-over version of the global Ranger that had been on sale elsewhere for years. We worried that the upcoming Bronco, too, might turn out to be a lame repurposing of one of Ford's global SUVs, such as the outdated Everest.

Based on spy photos, parts guides, and our sources within Ford and its suppliers, that doesn't seem to be the case. While we await Ford's official unveiling, everything we know about the new Bronco suggests it will be exactly what everyone wants it to be: a body-on-frame, two- or four-door SUV with legitimate off-road capability and a removable roof. 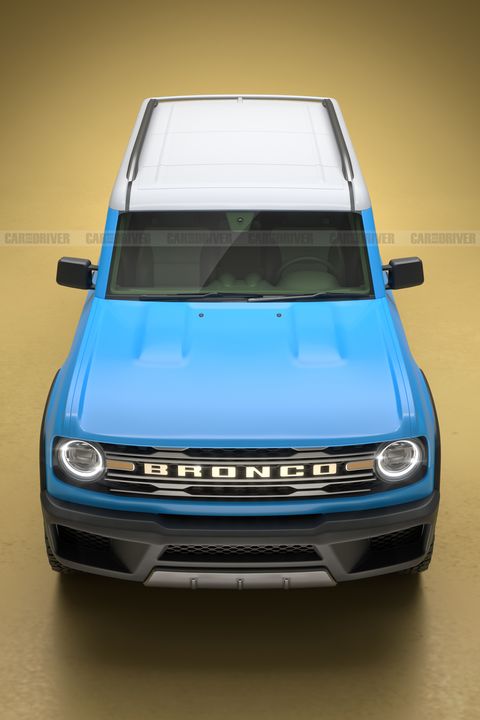 While it is based on Ranger/Everest underpinnings, its look will be a clean-sheet design with careful consideration (read: pandering) paid to all the things that make a Bronco a Bronco. It's no coincidence that Ford's carefully crafted modern-era Bronco will be similar in scope to the Jeep Wrangler, which has gained popularity in the years since the Bronco began its hibernation in 1996. Despite a few upstarts that briefly made waves, including the Nissan Xterra and the Toyota FJ Cruiser, Jeep has owned this off-road-SUV space for more than two decades. Remarkably, for two years now, FCA has sold more Wranglers than Nissan sold Altimas or Ford did Fusions. The Bronco, which will debut this spring as a 2021 model, will certainly look to make a dent in those numbers, although it isn't likely to be a volume seller like the Escape, the Explorer, or even the upcoming Escape-based Bronco Sport crossover.

Huge sales numbers are not the reason you roll out a niche model like this. The Bronco is mostly meant to get people excited about Ford SUVs again, so the styling will have to make an impact. As previewed by the Bronco R off-road race prototype, a squared-off hood and imposing Raptor-style grille that says "Bronco" in giant block letters will leave no doubt as to the identity and attitude of this model. We anticipate it'll have round headlights, lending a retro touch, and 35-inch all-terrain tires with plenty of wheel clearance for off-road capability. A chunky full-size spare tire will likely hang off the back

"In a departure from Jeep's approach, Ford is envisioning the Bronco as more of a high-speed desert runner than a low-speed rock crawler."

Doors and Roof Come Off

As previously mentioned, both two- and four-door versions will have doors that can be taken off for open-air fun, complementing a removable hardtop. The Bronco's side mirrors will be mounted on the A-pillars, and the doors will be stowable in the cargo area. Patents for the door-removal system show a set of latches, a far simpler solution than the hinges on the Wrangler's doors, which require tools to take off. Expect extradurable interior parts that will stand up to the elements, as one engineer let slip to us that waterproofing sensitive components, such as the power seats, was a challenge.

In a departure from Jeep's approach, Ford is envisioning the Bronco as more of a high-speed desert runner than a low-speed rock crawler (though the Bronco R race truck failed to finish the Baja 1000 this past November). This means the Bronco won't adopt an old-school live axle up front like the Wrangler and will instead have a long-travel independent suspension. The rear will be a live-axle setup with leaf springs, and both axle designs will be supplied by Dana. We expect the most hardcore Bronco will offer electronic anti-roll-bar disconnects and borrow the locking rear differential from the Ranger Raptor (not sold in the U.S.) and possibly the Torsen limited-slip front diff from the F-150 Raptor.

What's Under the Hood

If any element of the new Bronco is primed to piss off traditionalists, it's the turbocharged 2.3-liter inline-four that will serve as the base engine. Either that or the rumored hybrid powertrain that Ford may put in the Bronco. While die-hards won't be truly satisfied with anything less than a naturally aspirated V-8, we think most people will be just fine settling for this mill's 270-ish horsepower and 310-ish pound-feet of torque. If that's not good enough, a twin-turbo 2.7-liter V-6 will be optional, likely increasing those numbers to around 325 horsepower and 400 pound-feet. And here's the really juicy bit: In addition to Ford and GM's co-developed 10-speed automatic, word is that a manual transmission is in the works.

The cherry on top of all this nostalgia is the fact that the new Bronco will roll off the same assembly line in Wayne, Michigan, where its predecessors were built for decades. Ford built the Focus there in the 2010s before dropping it from the U.S. lineup. The current obsession with trucks and SUVs among the buying public and within Ford has taken a toll on sedans and hatchbacks. The Bronco isn't your average utility vehicle, though. It's shaping up to be a rare SUV with as much character as utility, with niche capabilities and broad appeal. It's Ford giving people, enthusiasts included, exactly what they want.