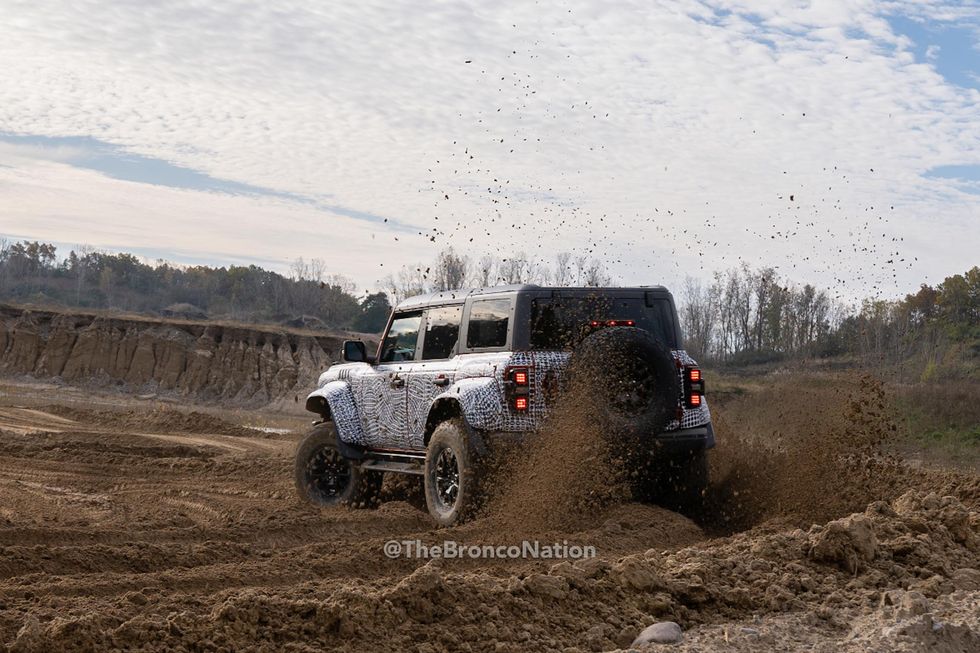 The upcoming 4x4 looks tough as nails off-road, but it definitely packs some turbos.

The Ford Bronco has already proved itself as one of the hottest enthusiast vehicles on the market, though next year's debut of the range-topping Raptor model should only crank up the excitement. Bred from the same Baja-bashing genes as the F-150 of the same name, the Bronco Raptor promises to bring even more sweat to the brow of the Jeep faithful. Thanks to the team over at Bronco Nation, we now have a chance to see this upgraded 4x4 take on some trails at an off-road park.

The video itself is beautifully shot and features a camouflage Bronco Raptor prototype flinging its way through some thick mud. The truck appears to be the same test mule that was spotted previously, wearing many of the same upgrades previously spied by photographers. These include items like the massive 37-inch off-road tires, wide fender flares, and an upgraded suspension set-up. Car and Driver reported that the SUV will specifically utilize Fox’s Live Wire twin-tube bypass dampers, mirroring the F-150 Raptor’s through-mounted design. This clip also hints once again that the new Bronco will feature other beefier components for work on the trails, such as larger lower control arms and upgraded differentials at both ends.

Thanks to the lack of music in the video, we also get to hear what the Bronco Raptor has packaged between the front fenders. As we’ve been expecting, it sure doesn’t sound like a V-8 under the hood. Instead, it's a safe bet Ford will indeed utilize a twin-turbocharged EcoBoost V-6 in the SUV. It's still unclear whether that engine will be the same 2.7-liter V-6 shared by the standard truck, or whether Ford will utilize one of the larger options at its disposal. Both the 3.0-liter and 3.5-liter V-6 are plenty powerful, providing 400 and 450 hp in their respective trims.