How GM's Infantry Squad Vehicle for the U.S. Army Was Developed on the Double 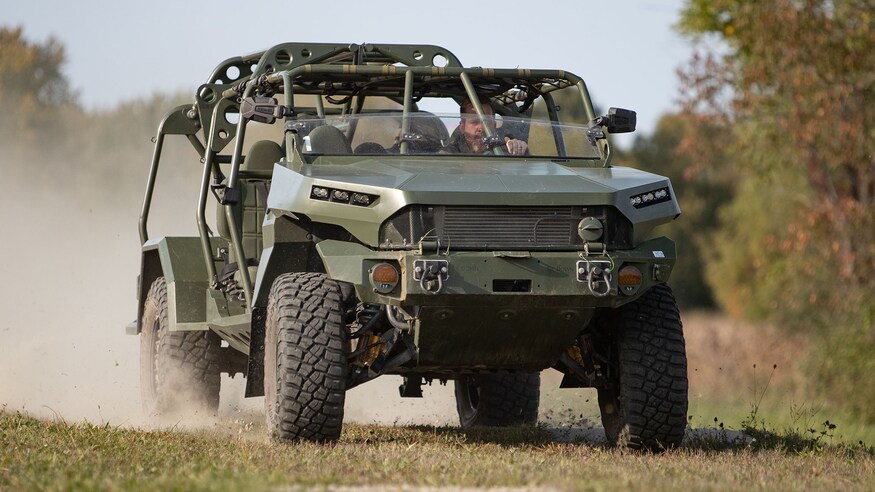 General Motors reconstituted its GM Defense business in October 2017, largely to promote its Chevrolet Colorado-based ZH2 and subsequent Silverado ZH2 fuel-cell-electric vehicles, which promised to provide 80 kilowatts of clean, silent power "in theater," while emitting 2 gallons per hour of potable water, potentially running on hydrogen produced by reforming JP-8 fuel on-site. The Army has yet to bite on that one, but it was recently in the market for an "Infantry Squad Vehicle. " This go-anywhere vehicle does not replace any current vehicle; rather it is intended to be dropped behind lines and transport Army infantry troops closer to the hot zone (up until now they've been walking). As such, it must be able to carry nine troops and their gear, be compact enough fit inside a CH-47 Chinook helicopter, and light enough to be "high hot sling loaded" (dangled beneath) a UH-60 Blackhawk helicopter in environments like Afghanistan. This limits its battlefield-ready weight to 5,000 pounds. Here's the backstory of how GM developed such a vehicle in record time and hence got itself back into the Defense biz.

Bid Sample In 18 Weeks; Prototypes In 22 Weeks; Production In 17 Weeks

Five companies were invited to produce "bid sample" vehicles for the Army to assess and given 18 weeks to complete them. GM quickly realized that the Chevrolet Colorado ZR2 essentially had the "go anywhere" requirement met—especially when upfitted with a full catalog's worth of GM Performance Parts already developed for the ZR2 by the Chad Hall off-road racing team (which has thus far completed every race it's started in the ZR2). So the engineers knuckled down to develop the nine-passenger seating (which includes two rear-facing troops in the "third row," with two outboard-facing seats behind them) and an exoskeleton capable of protecting nine troops, squeezing into a Chinook, and dangling from a Blackhawk—along with myriad other Army requirements (like sustaining long grades at max weight in 120-degree heat, which GM's climate-controlled dynos easily verified). Obviously this compressed timing and budget demanded heavy reliance on computer-aided design and engineering—something GM is extremely familiar with, having just showed off a GMC Hummer EV that will come to market after just two years of development. During a month of Army testing, the five bid samples were whittled down to three finalists: GM/Ricardo, Oshkosh/Flyer, and SAIC/Polaris (not the Chinese-owned SAIC Motor); GM then spent 22 weeks producing two prototypes for further testing at Fort Bragg and the Aberdeen proving ground. From the day GM Defense was awarded the contract, the company had 120 days to deliver its first units. That's 120 COVID work-from-home days, and it ranks as the Army's fastest ground vehicle development program of the past decade. The first vehicles are being produced on the same early-build prototyping shop in Milford, Michigan, that built the eCOPO Camaro, but production will eventually move to Concord, North Carolina. ISV production will start at four per month, ramping up to 14 per month. 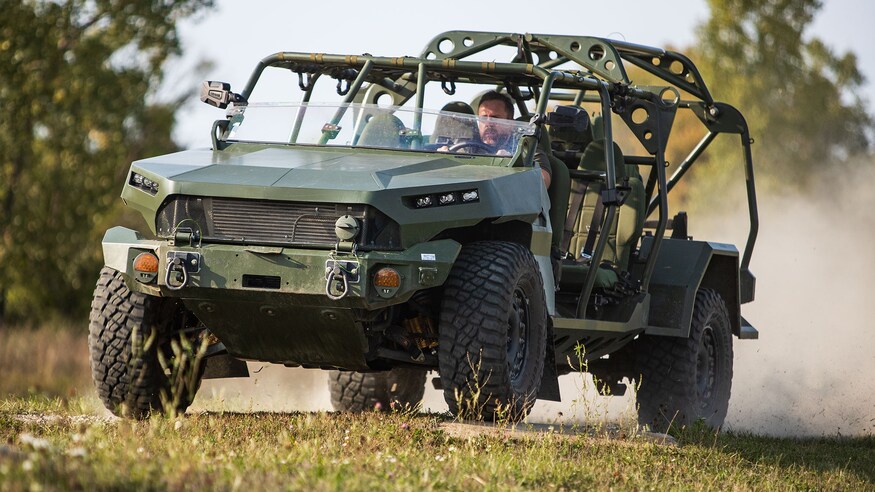 During that period of testing and throughout the development process, the GM team leaned on its long history of "market research," soliciting and acting on feedback from the soldiers who were testing it. The team also sought feedback from GM's 250-strong Veterans' Employee Resource Group. Many of the hundreds of changes made between the prototype and production vehicles were due to soldier feedback, like the mesh webbing "roof" over the cabin, onto which nine rucksacks can be quickly tossed or retrieved, retained by a single cargo net. The original plan had been for individual D-rings to hold the sacks around the perimeter of the vehicle but using them proved too time consuming.

It also can't have hurt the ISV's chances that the truck is super fun to drive (see our First Drive review) and looks for all the world like the M12 Force Application Vehicle "Warthog" from the Halo first-person shooter video games. And yes, Mike Simcoe's GM Design team in Warren penned the ISV—also on the double. The Army would not, of course, have chosen the most popular vehicle with soldiers unless it also best met the Army's criteria. "At the end of the day, GM's ISV was the best value to the government across all aspects—performance, soldier feedback, cost/price, as well as sustainment," said Steven Herrick, the Army's Ground Mobility Vehicle product lead.

One of the most attractive features of the GM Defense ISV is GM's global parts supply network. The Colorado is sold globally in North and Central America and in Korea. That's not the case with the other traditional Defense suppliers. That eases parts resupply, because 70 percent of the ISV is unmodified Colorado ZR2 content—a figure that jumps to 90 percent by the Army's accounting system, which counts items like the cut, trimmed, and hemmed stock Colorado cab floor pan and T1 truck bed floor, and the aftermarket suspension travel limit straps as "stock." Assembly methods are also changed to suit the ISV's low production volume, with bonding and riveting replacing welding in certain components like the floor panels. The frame and exoskeleton receive an electrocoat primer, then certain parts are powdercoated while others painted. The aluminum hood panel is stamped on low-volume kirksite dies. Oh, and a lot of the bespoke parts like the front-wheel-opening mud deflectors, the headlamp bezels, and the battery cover will start out being 3-D printed. They may eventually be tooled when production increases, but this also makes it easy to produce replacement parts in the field. 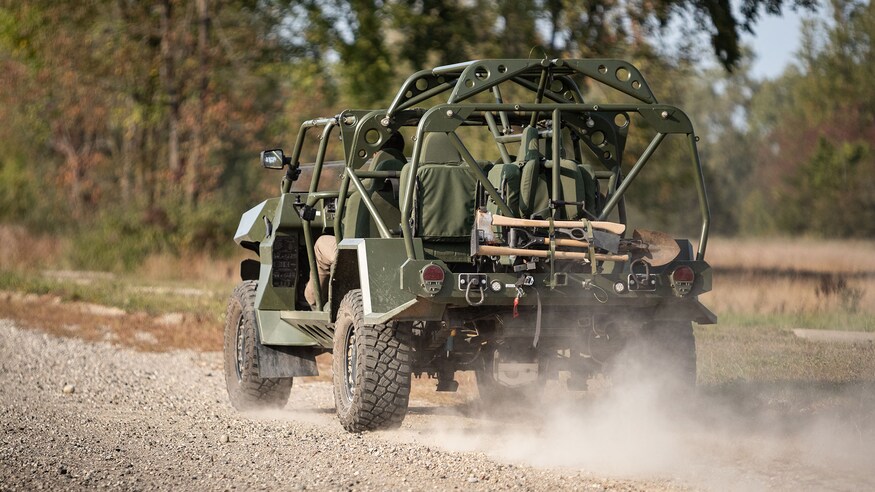 There will be no NHTSA or IIHS testing of the ISV, but GM computer crash tested the ISV to meet a tougher Army standard that has the truck being struck hard from the side and rolled onto its roof. Naturally the ISV passes, but testing like this helped drive the decision to place four-point harnesses in most seating positions with a five-point harness in place to prevent soldiers from submarining out of the two rearmost outboard-facing seats.

Ricardo has experience working with the military, having developed the ABS/stability control systems for the Humvee. Most important, the company understands what the Army needs and expects in the way of back-end service and maintenance, which is all part of the initial purchase contract. They've done lots of technical training with Army and will assist in this way with the ISV.

How The ISV Stacked Up Against Its Competition

Herrick declined to comment on the performance of any of the other ISV prototypes that were considered, and his procurement agency has no experience with the Polaris DACOR vehicle on which its ISV concept was to be based, which some units have purchased on their own using GSA (General Services Administration) contracts through the through DLA (Defense Logistics Agency). The U.S Army A-GMV (M1297) has also been performing some of the ISV functions for a while now. That vehicle is also transportable and capable of low-velocity aerial delivery, but it's too heavy for a Blackhawk to carry and it's way more expensive. 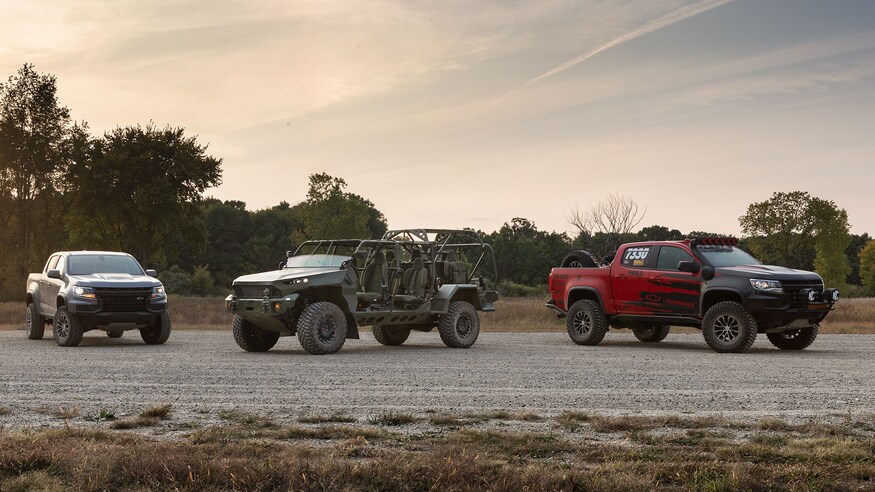 What's Next For GM Defense?

With this contract in hand and Infantry Squad Vehicles being delivered as you read this, GM Defense is now bidding on a contract to replace the Joint Light Tactical Vehicle (JLTV). That will largely be a "from scratch" vehicle, not a repurposed T1 heavy duty truck. Of course, that doesn't mean certain parts won't be sourced from the corporate bin when that makes sense. Looking further into the future, David Albritton, president and general manager of General Motors Defense LLC, believes that the GM's extensive experience with electrification—both battery- and fuel-cell-powered—and autonomy position the company well to meet future military challenges. "We call these our strategic road platforms. We've got three of them—integrated vehicles, power propulsion, and mobility/autonomy." Herrick summed up the collaboration this way: "The marriage of the Army with GM Defense collectively has broken the mold on how we do Army acquisition and how we will move forward." We hope to bring you exclusive early coverage of the next GM Defense ground vehicle, whatever that may be.