Variety pack: 4 builds highlighting the diversity of the modern custom 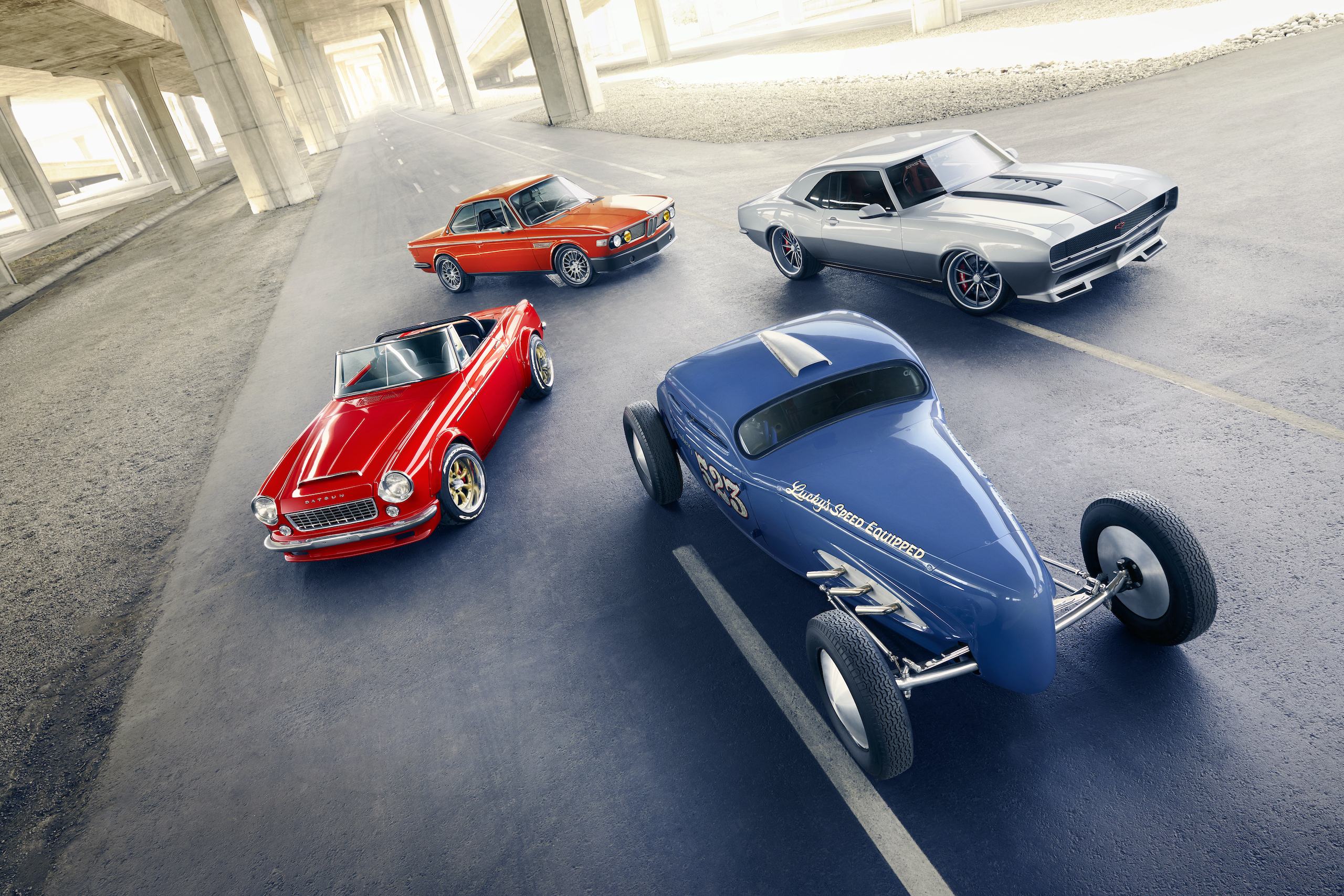 Where do you stand on hot rods?

For some collectors, only 100-point originality to concours perfection will do. They’ll scour factory documents and period photos to get their car looking exactly as it did the moment it left the assembly line, scoffing at any owner’s attempt to improve upon the manufacturer’s well-planned vision. After all, cars are only original once.

That kind of nut-and-bolt accuracy is important to maintaining the history of the cars that make up our hobby. But not for all of them. For every finely crafted sports car that was perfectly tuned at the factory, there have been hundreds of thousands of pedestrian models wearing the rough edges of mass production. Even in showroom condition, many of these cars don’t represent what their designers originally intended—or dreamed of in their off hours. There’s usually plenty of room for improvement. 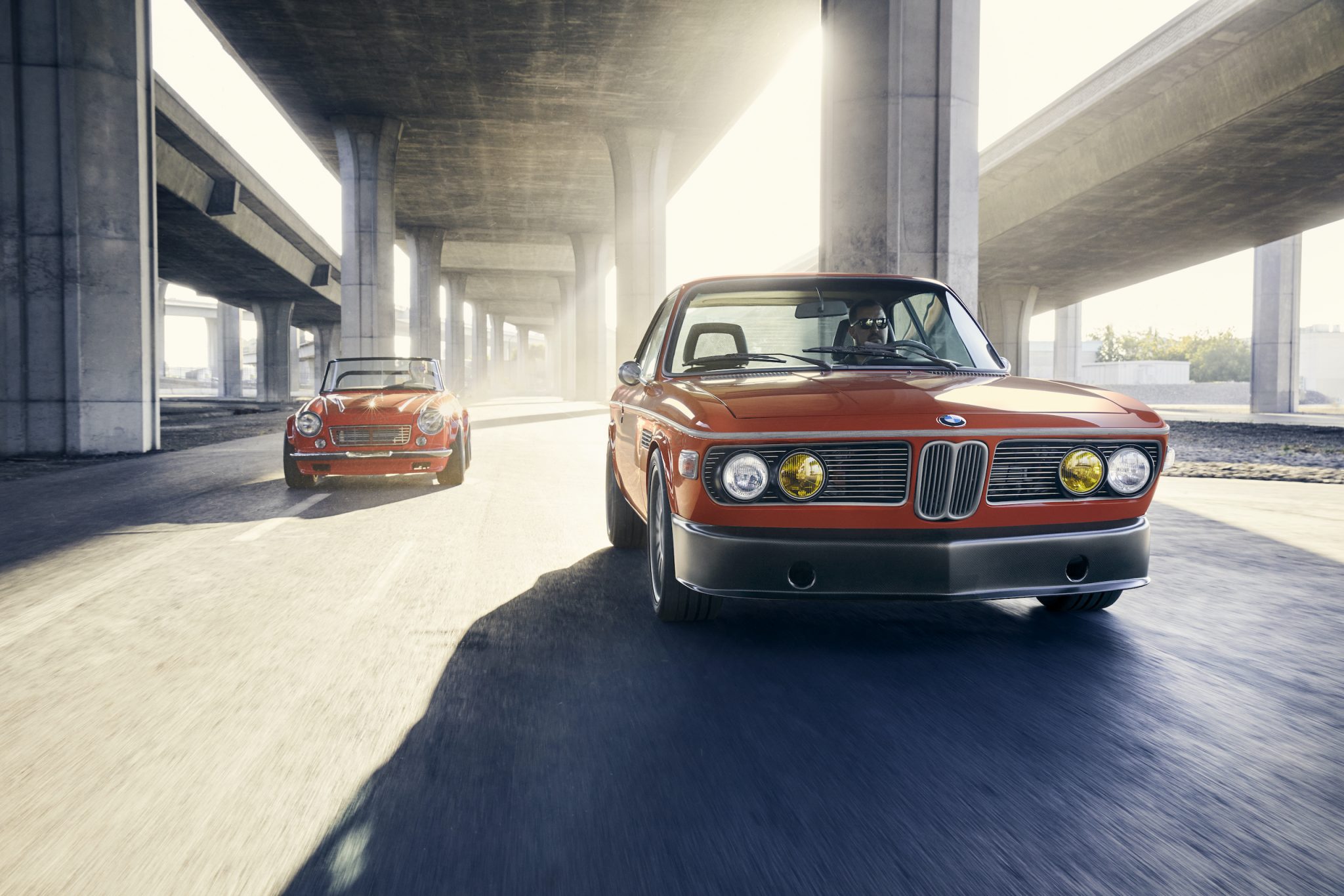 As a new generation of builders moves onto the scene, new subjects are being customized, including these two foreign jobs, a 1966 Datsun roadster and a 1972 BMW 3.0. Joseph Puhy

We owe so much of the appeal of automotive culture to what some cars become once they are personalized and take on lives of their own. Some significant examples are known more for their modifications than for their originality. Would the 1957 Chevy be as iconic if it weren’t for the NASCAR racers and the scores of gassers proving the Chevy small-block’s mettle? Would the Mustang have the same mythos without the Bullitt?

We gathered four modified cars, from a purpose-built Bonneville racer to a totally rebuilt restomod that left nothing unchanged, to show just a portion of the wide spectrum that customization has become. Speedkore’s wood-trimmed BMW 3.0 is worlds away from the ’31 Ford coupe of Lucky’s Hot Rods, but they share the same ethos to improve on what the factory built and do it with a highly personalized stamp.

As a new generation grows into the hobby, new subjects, colors, and materials are being tried. Hot-rodding is an art form, and as such, it is always evolving, just as it should. 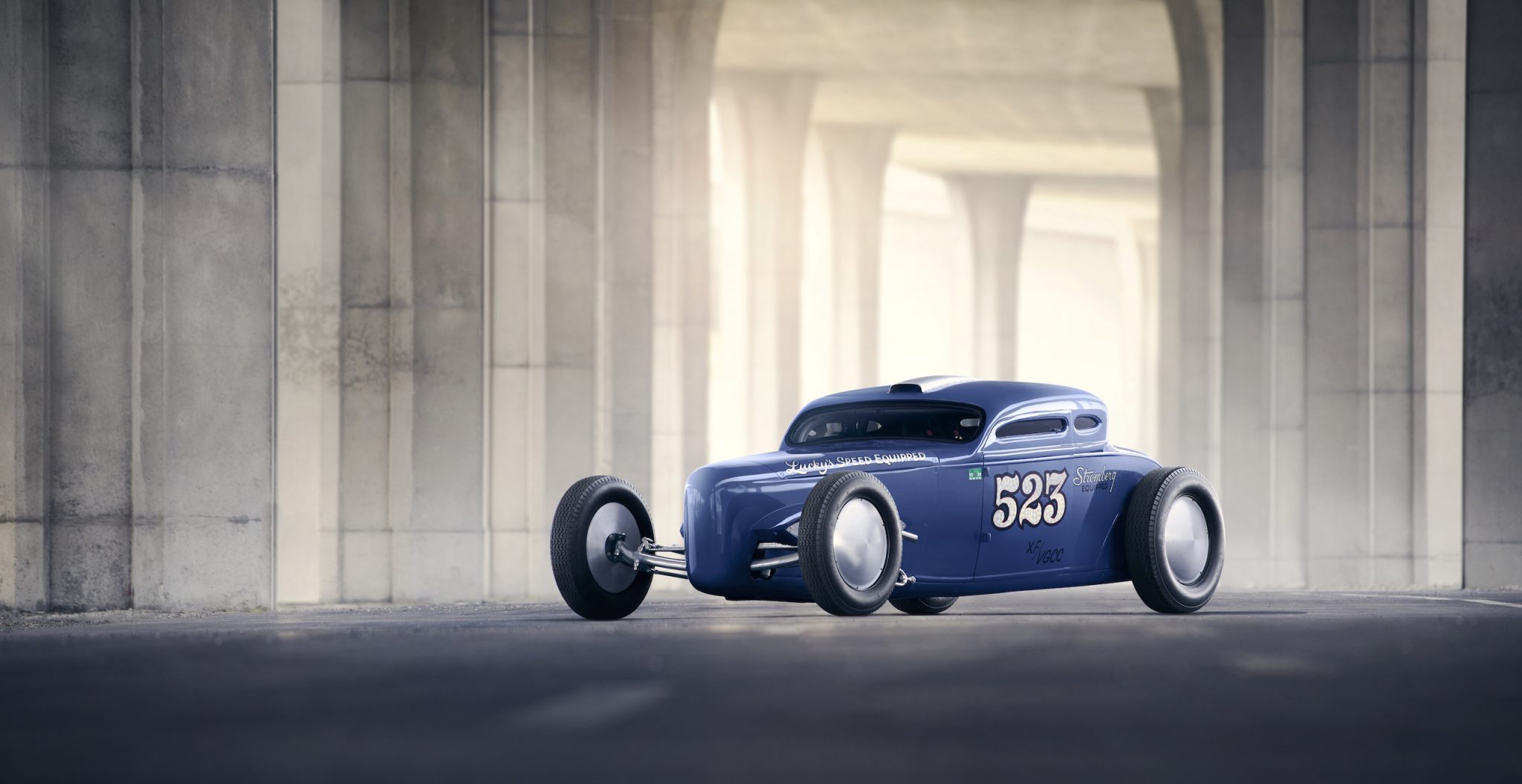 The scoop on the coupe’s roof, made from a single sheet of aluminum, is the first panel that builder Lucky Burton ever hand-shaped. It’s a bit rough, but it reminds him of how much he has learned. Joseph Puhy 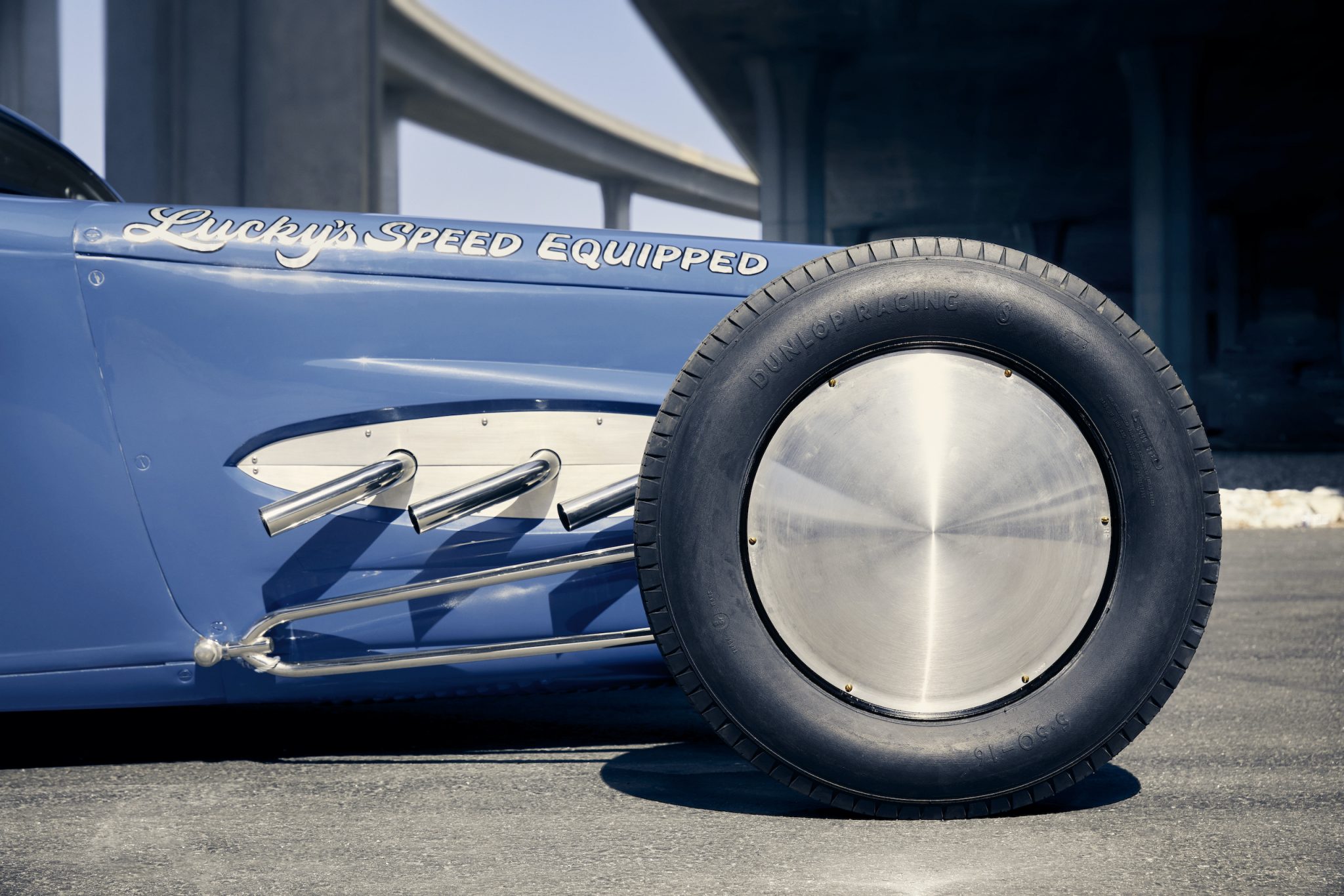 If you had to pick only one model to represent the postwar hot-rod boom, it would have to be a V-8–swapped Ford Model A. Lucky Burton built his land-speed-racing coupe in the same vein as some of the most recognizable racers of the 1950s—and being totally vintage, it competes in the same Bonneville class as the originals.

Burton runs Lucky’s Hot Rod Shop in Burbank, California, where this 1931 coupe took shape. He started with just a derelict body shell that had spent a decade in storage before he finally set aside the time to work on it. He first chopped the top 5 inches, intending to make it a street rod. Then plans took a turn toward the salt. 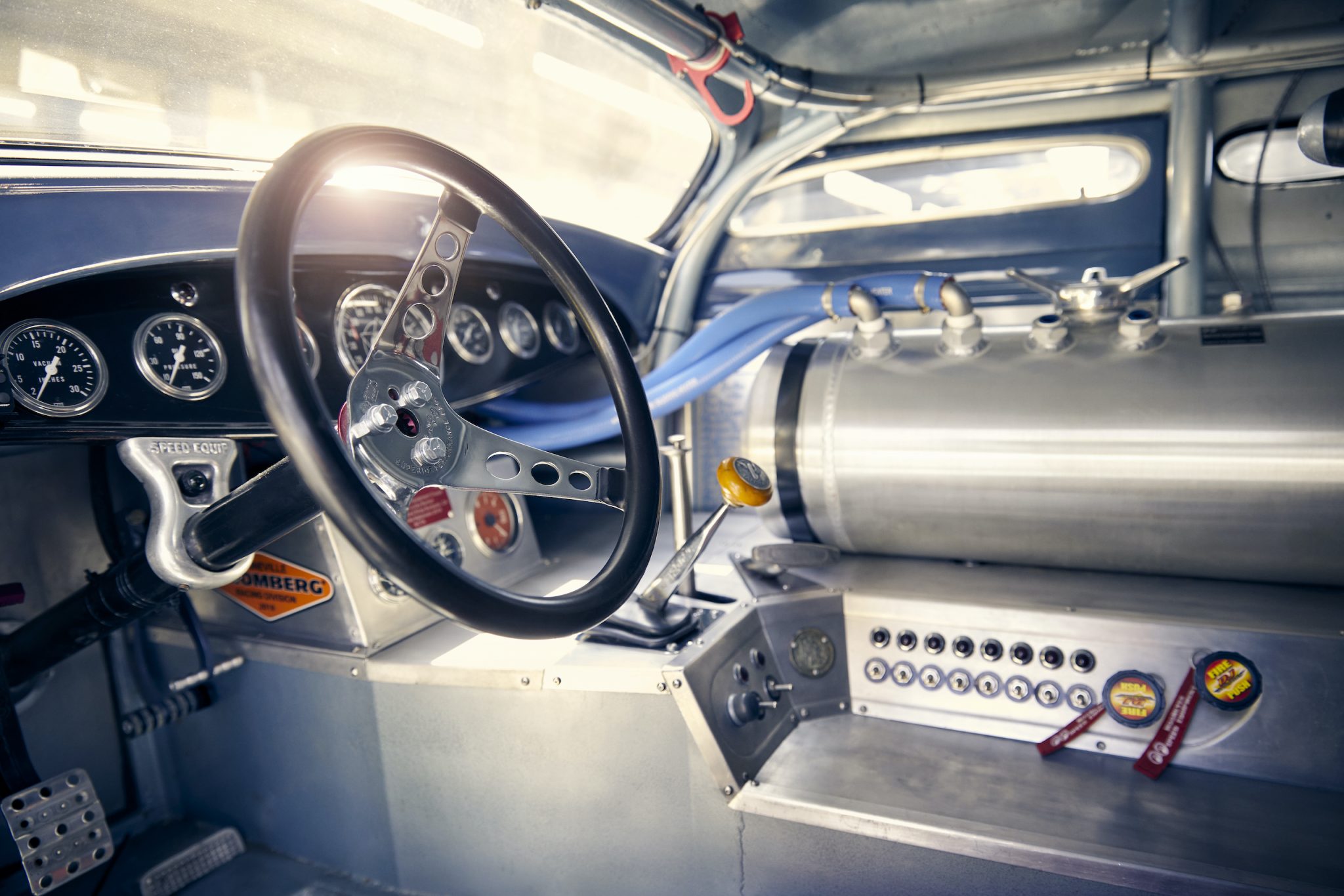 When the iconic Chrisman coupe, a rear-engine Model A that the Chrisman Brothers ran at Bonneville in the 1950s, came up for sale in 2018, Burton got to inspect it up close. He fell in love with the proportions, and by the time he returned to his shop and his freshly chopped coupe, his mind was made up. The sparks were soon flying, and the top dropped even lower. The nose, like the original Chrisman coupe, was built from a pair of 1940 Ford hoods. A belly pan was fabricated from 16-gauge steel.

Power comes from a 24-head-stud (meaning 1938 or later) 8BA Ford flathead V-8 stroked with a Mercury crank. So far, it has taken Burton up to 108 mph in the flying mile at Bonneville. “It’s not terrifying, but it’s also a new experience at 100 mph,” Burton says. An engine rebuild is in the works to try to squeeze more power from the ancient mill as Burton targets the current class record of 156.026 mph. After all, it’s not really a hot rod if it’s ever truly finished. 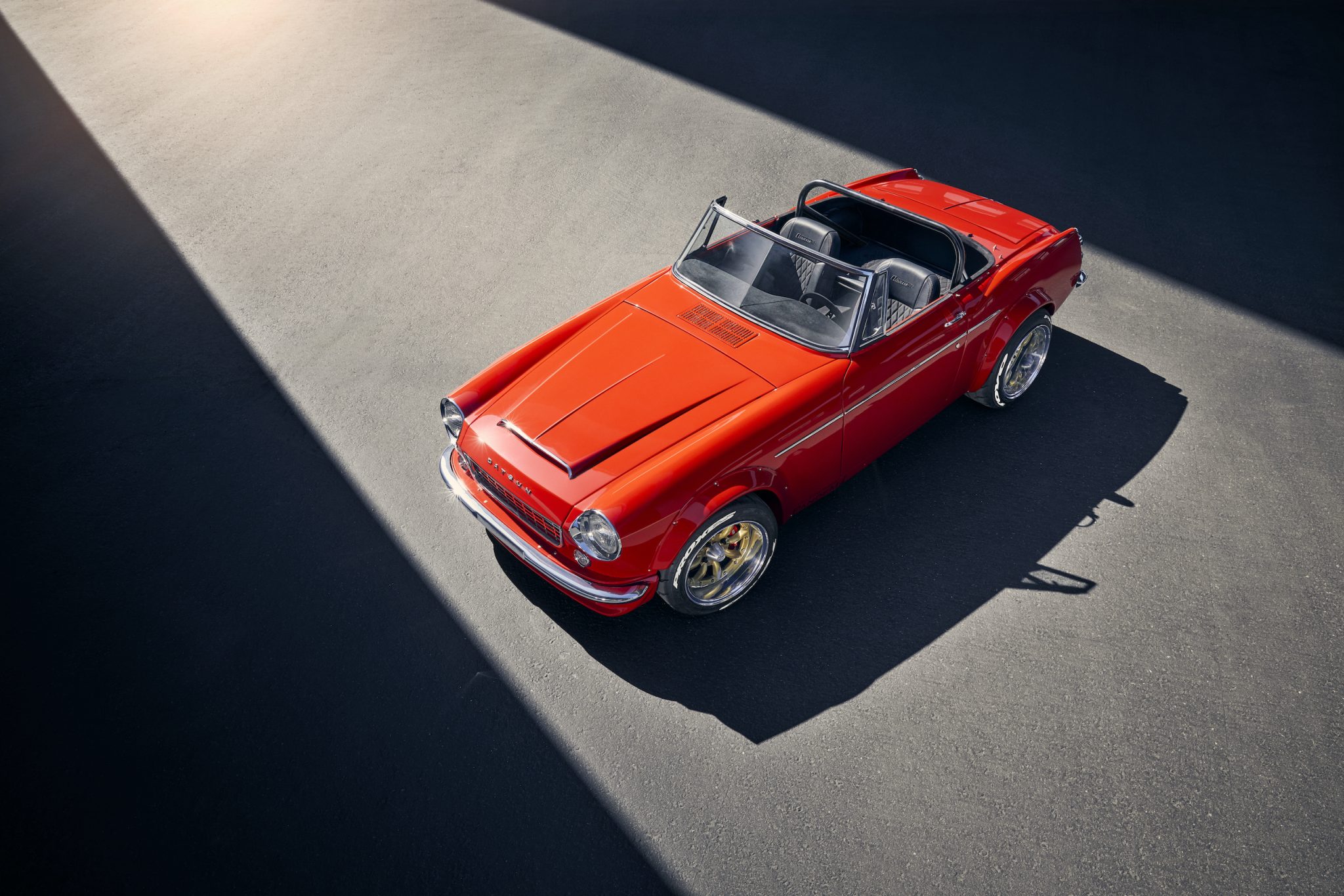 Mike Spagnola Jr. bought his Datsun roadster for $600 and spent half a year building it. Most of the work took place in the final four months, when he dedicated more than a thousand hours to its completion. Joseph Puhy 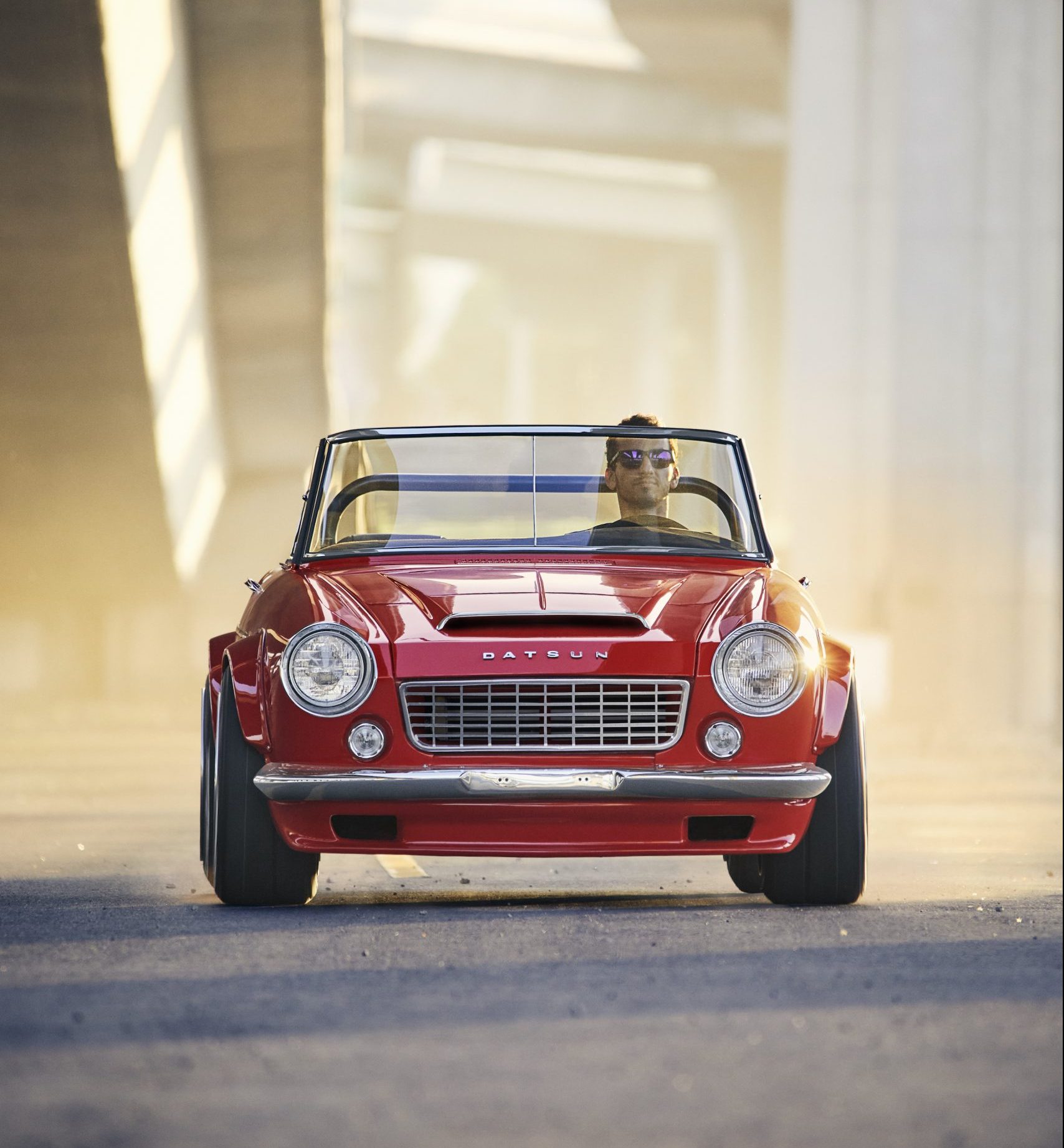 Mike Spagnola Jr. came to Datsun sports cars via his father and brother. They are both into restoration, and both have ’67 2.0-liter roadsters. But “OEM is not my forte,” Mike Jr. says, so his planned modifications to his 1966 roadster would result in a fun, nimble car to ply the nearby mountain roads. His shop, Purpose Built Motors in Azusa, California, is just miles from some of Southern California’s most well-known twists and turns.

In an all-too-familiar scenario, those plans turned wilder and wilder. A first-gen Mazda RX-7 GSL donated its rear axle, which was narrowed by nearly a foot to fit underneath the diminutive roadster. Four-wheel disc brakes were pulled off a 1990s Nissan 300ZX Twin-Turbo. The brakes are more than capable of hauling down the light car, and the calipers, rotors, and pads are easy to find and cheap to buy. Spagnola did splurge a bit on proper three-piece Watanabe wheels. 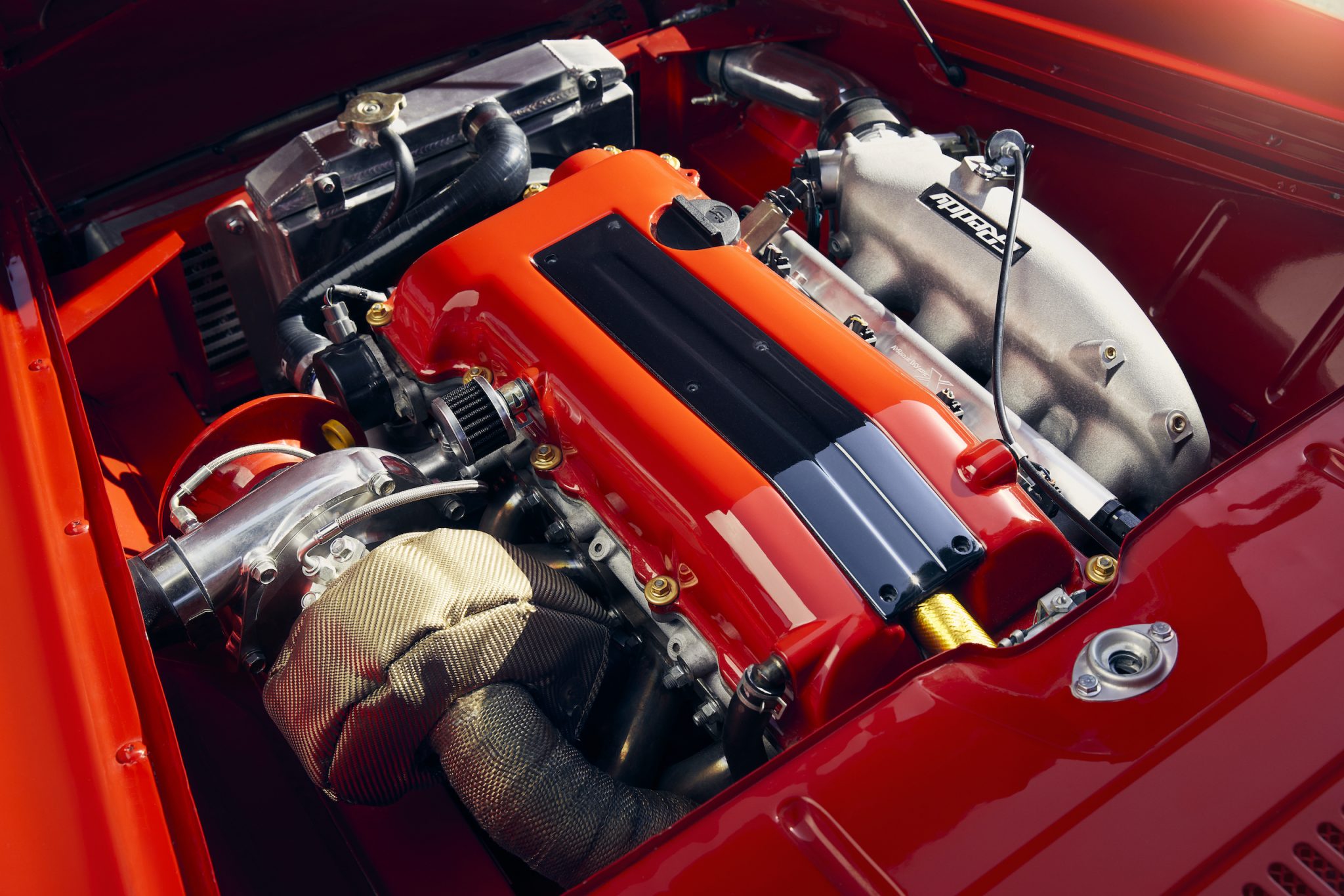 Not bound by originality, Mike didn’t hesitate to ditch the roadster’s 1600-cc, 96-hp engine, though he did keep things in the Datsun family. Nissan’s SR20DET engine was used in the S13 Nissan 240SX that was sold in the U.S. The 240SX is a wildly popular platform to build into a drift car, and the SR20DET would be the Chevy LS V-8 of the drift world if it weren’t for the fact that the LS V-8 is the LS V-8 of the drift world.

Spagnola swapped in a modern turbo that quickly spools up to provide 320 rear-wheel horsepower for the 1975-pound sprite. Do the math—that’s a better power-to-weight ratio than all but the hottest muscle cars on the market today. 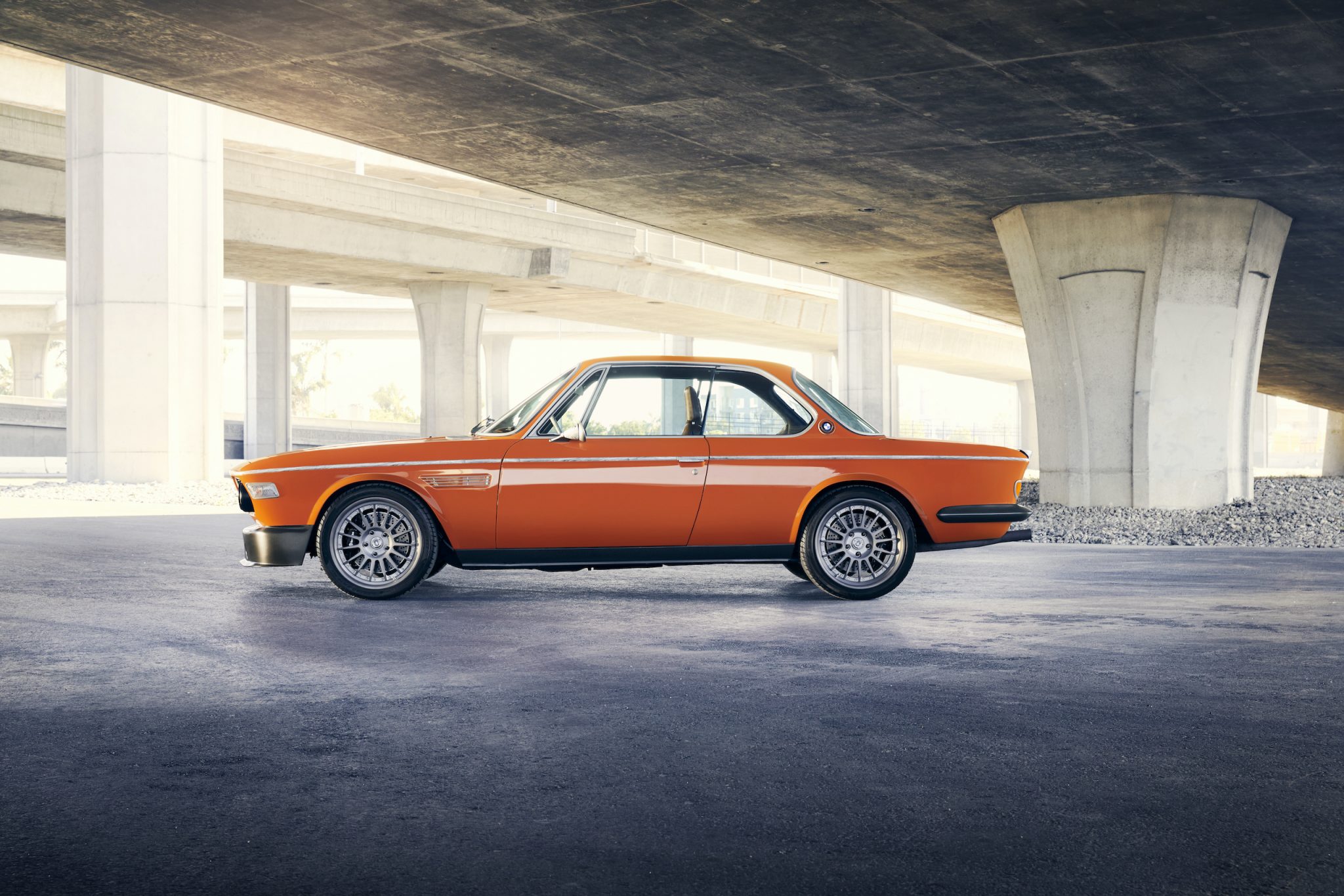 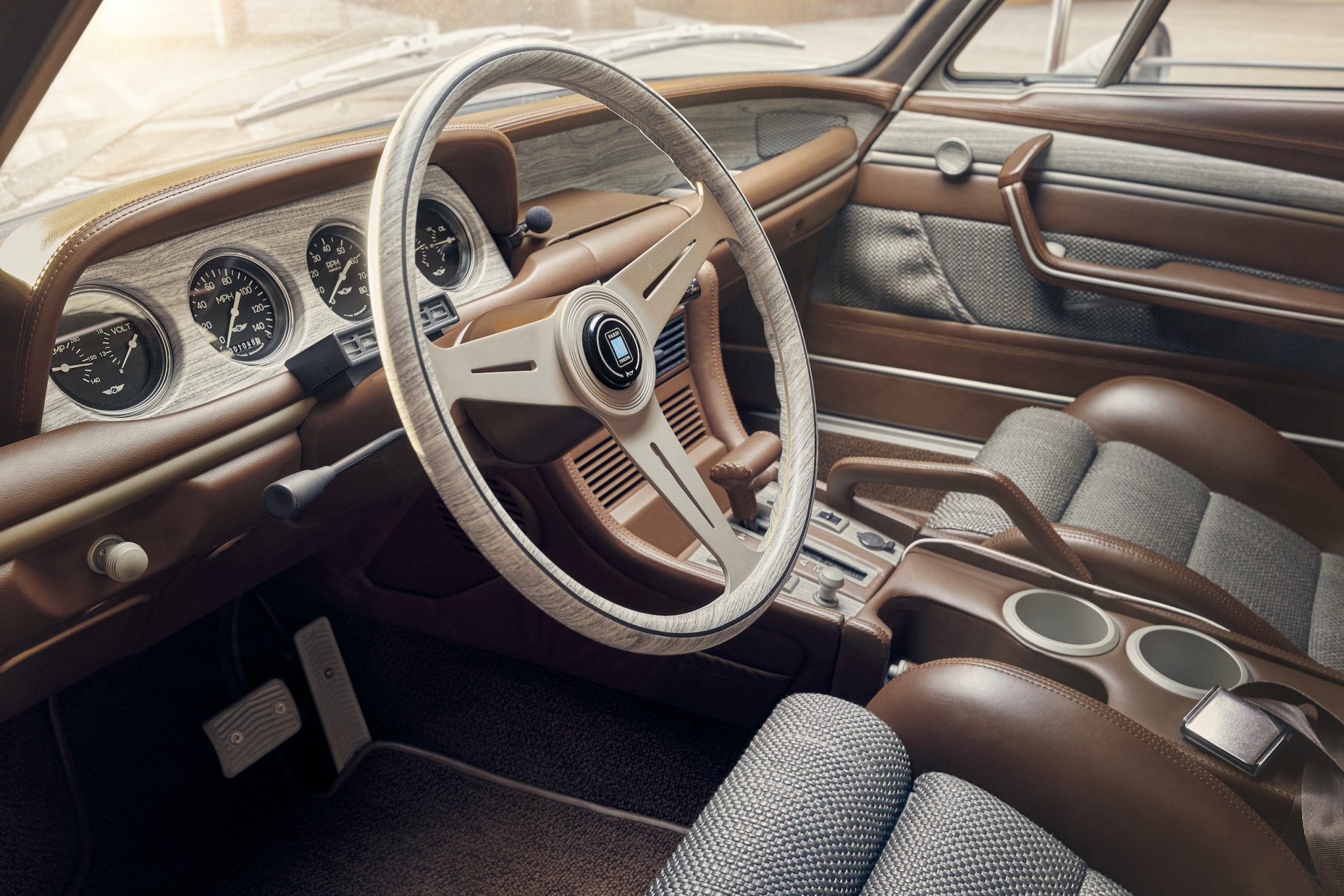 Speedkore is probably best known as the company that rebodies Mopar muscle cars with carbon-fiber panels. It applies that same detail-driven philosophy to every one of its builds, and after Robert Downey Jr. commissioned the company to build a 1970 Mustang for himself and a ’67 Camaro for his Avengers costar, Chris Evans, the Iron Man returned to have a 1972 BMW CSi built in the same vein.

As with the muscle cars the shop has done before, Speedkore built this BMW E9 as a restomod that keeps plenty of the original car’s style, inside and out. The body is factory, repainted in PPG Brick Red, and the trim was finished in Titanium Cerakote, a ceramic coating often used on guns. All of the original style of the interior remains; it was simply upholstered using complementary colors and modern textures, as well as a gray wood dash trim that is echoed on the out-side, with pieces of the car’s exterior trim substituted with wood replacements. The suspension uses newer components, but it retains the factory geometry. 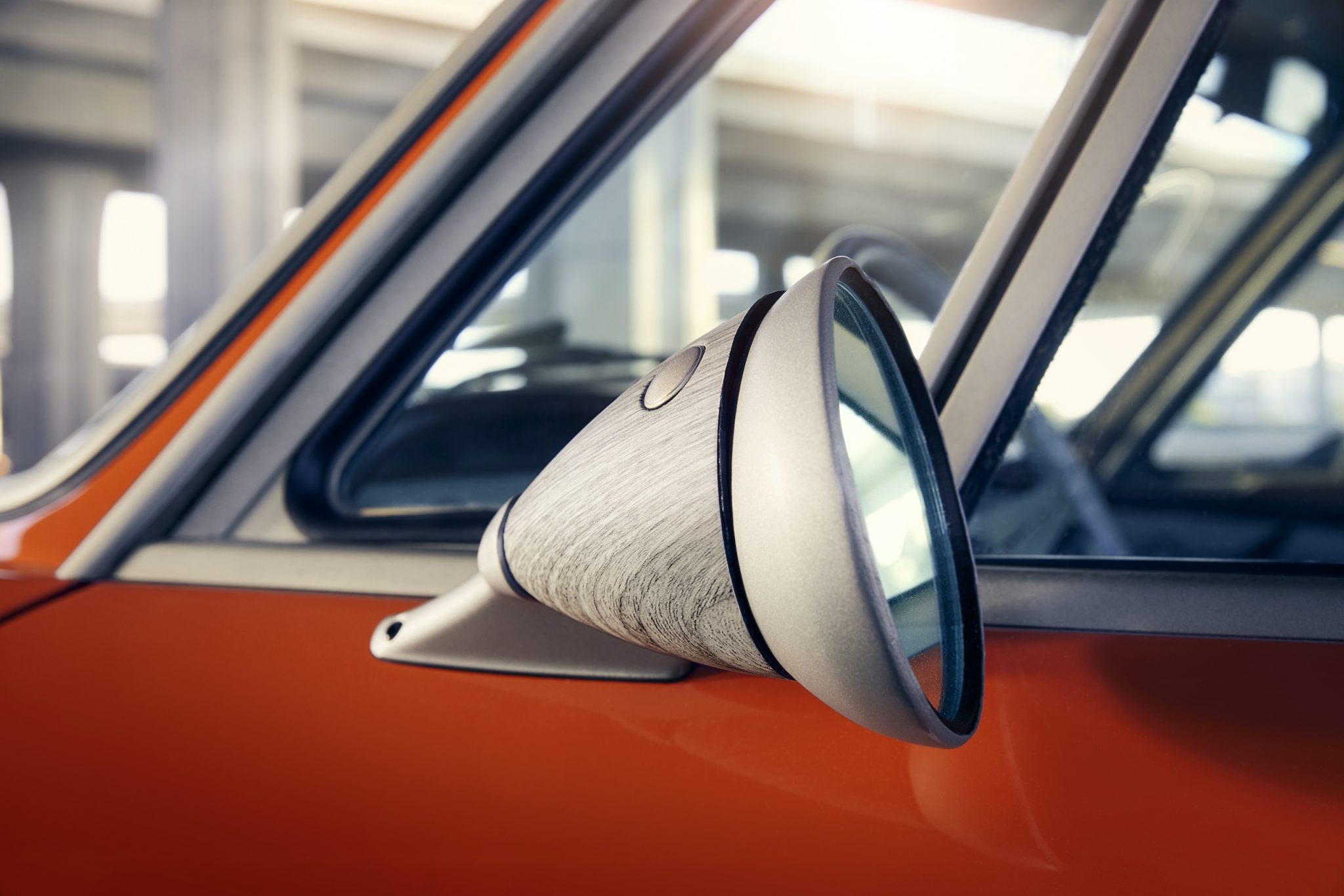 Naturally, an E9 needs a proper Bavarian inline-six. Rather than the factory M30 that produced 180 horses in the 3.0 CS and 200 horsepower in the CSi, Downey’s car is fitted with an S38 3.5-liter inline-six from the 1988–95 E34 M5. The only real derivation from the E9 is that the high-revving, 300-plus-hp six is now coupled to a ZF 4HP22 four-speed automatic. It’s the same transmission you’d find in an E34 5 series, and it lets the engine wind out before shifting.

A classic coupe rebuilt from the ground up with better grip and a new engine packing 50 percent more power? Sounds like a hot rod. 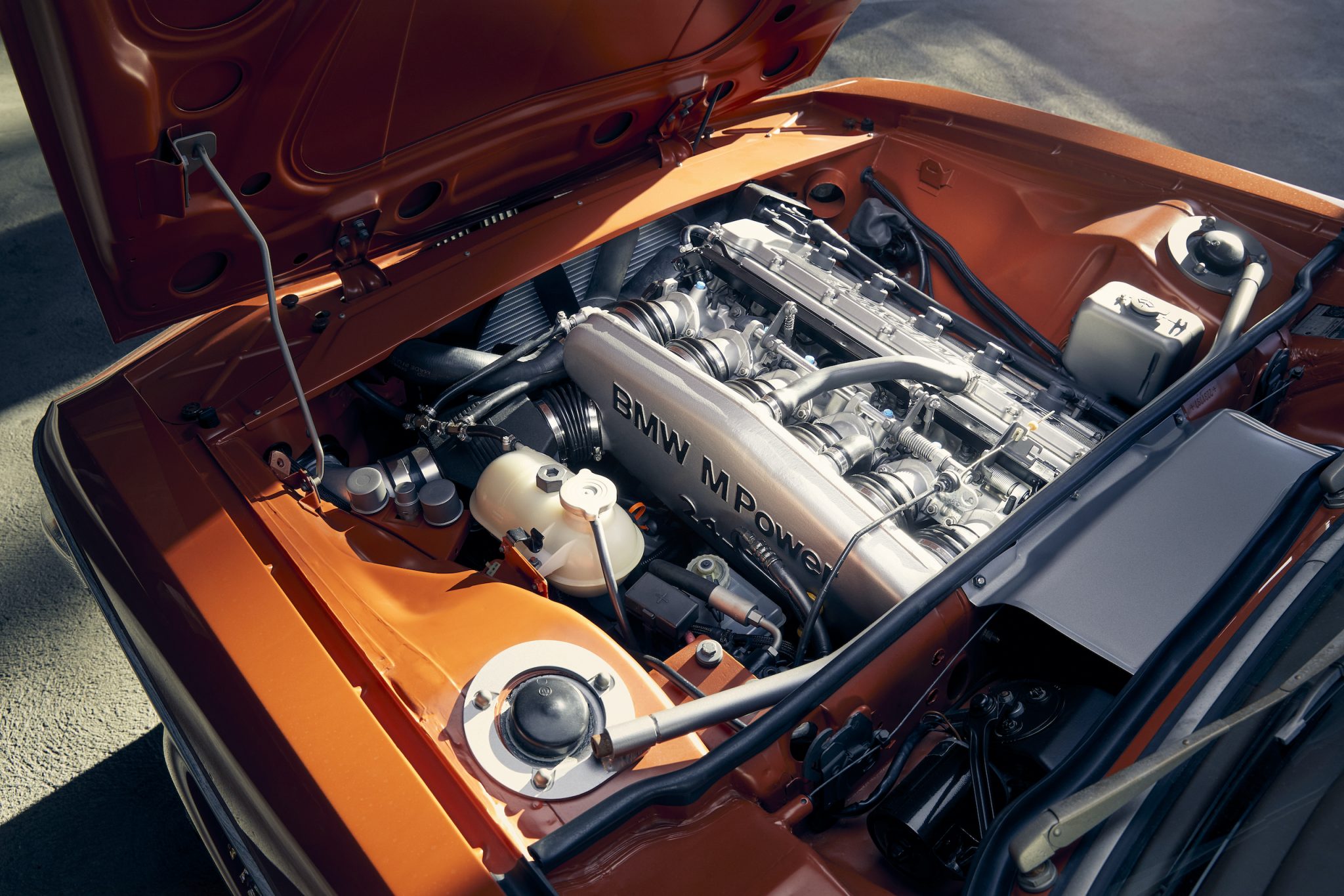 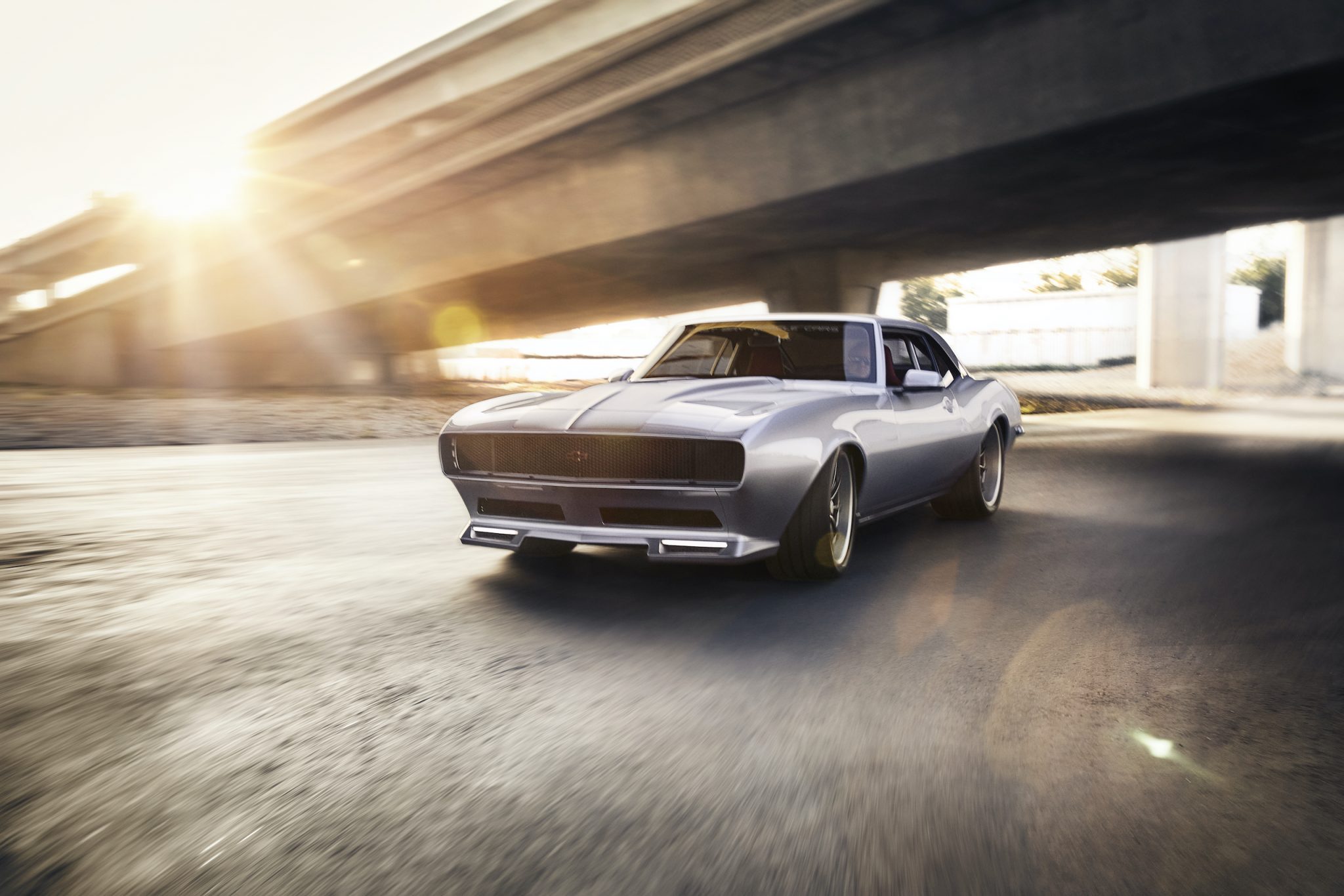 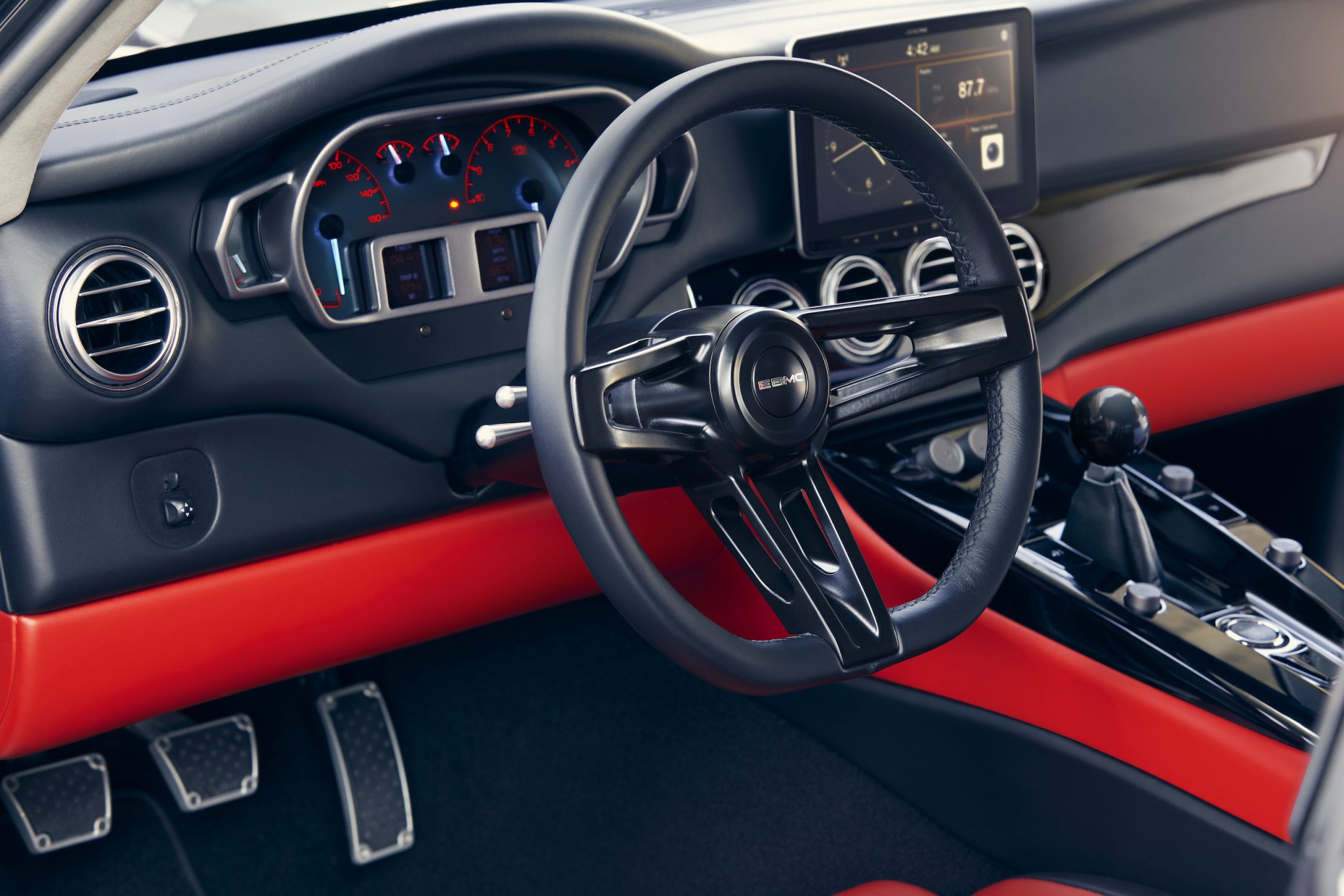 Steve Keefer, owner of East Bay Muscle Cars in Brentwood, California, shows up at the Specialty Equipment Manufacturers Association (SEMA) Show in Las Vegas with a high-end build almost every year. You can call his builds pro-touring, meaning modern drivetrains and suspensions, but Keefer’s cars tend to be more luxurious than other muscle cars that have been updated into track-focused machines.

As with many of the best customized cars, you’d have a hard time picking out the myriad modifications on this 1968 Camaro. The whole car has been widened 5 inches, and the crown of the rear fender has been sharpened slightly to draw attention to the curves. Sculpted inner fenders frame a supercharged Corvette LT4 V-8. Rather than the Roots-style Magnuson supercharger that the factory LT4 would normally use, this engine uses a custom sheetmetal intake that is fed boost from a Procharger supercharger. The V-8 routes power through a Tremec T-56 Magnum six-speed transmission. Peer through the back window and you can get a glimpse of the inboard-mounted coilovers of the pushrod suspension, part of the custom Chris Alston gStreet chassis. 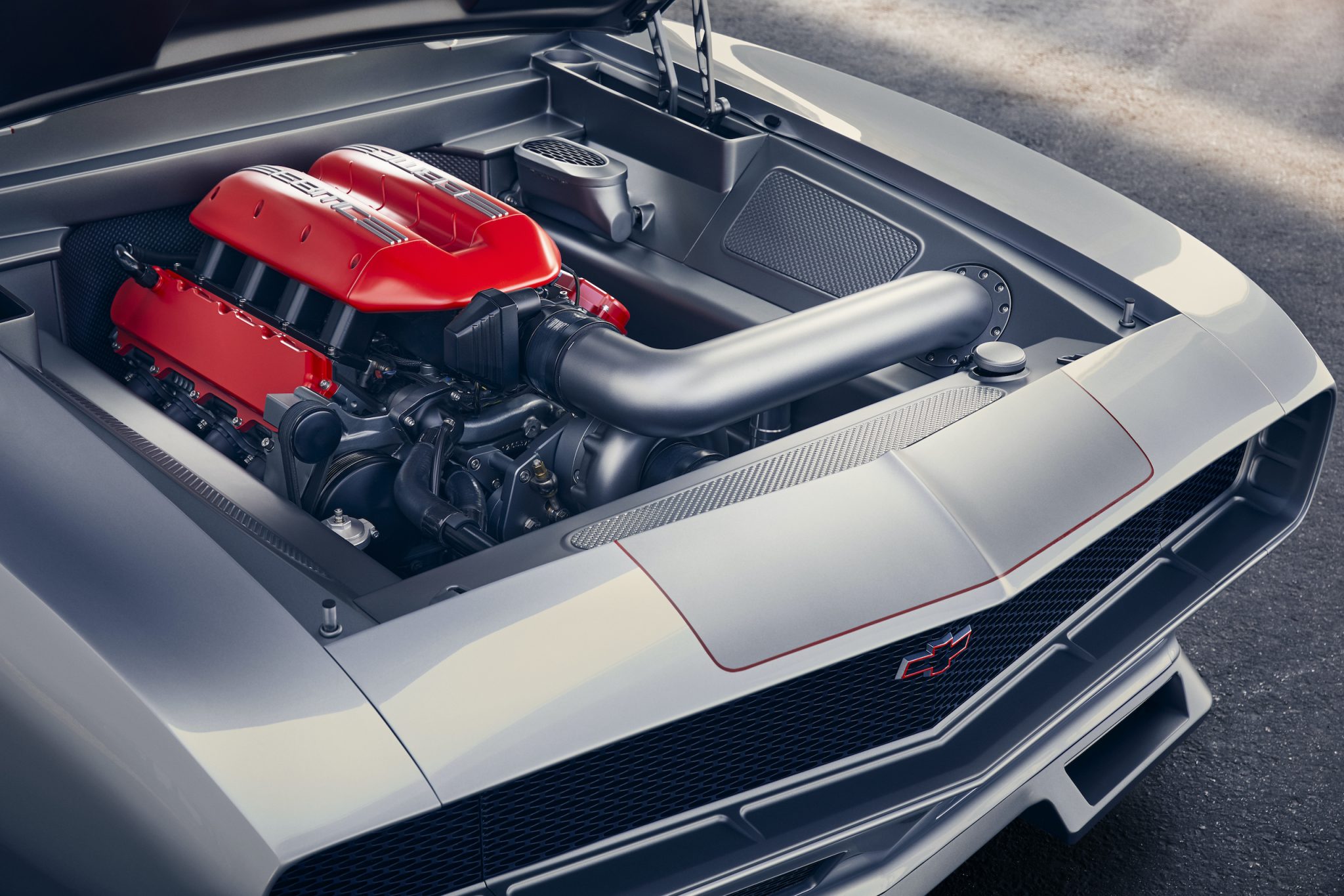 When it comes to cars of this caliber, Keefer admits that his customers could buy just about anything, and shops like his are actually competing with some of the best OEM performance cars on the market. His philosophy is to build the car that current manufacturers would if they could start with the classic lines of their best designs. “We’re going for a factory prototype theme,” Keefer told us.