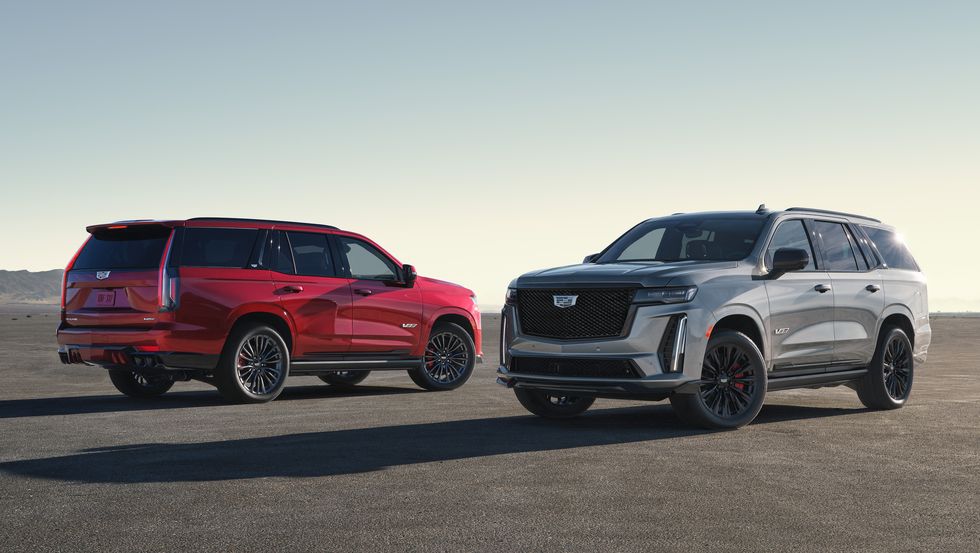 Cadillac has revealed the first full images of its new performance SUV but has yet to divulge any technical details regarding the high-powered colossus.

Cadillac teased the Escalade V yesterday with a short sound bite of its snarling V-8 engine, and now Cadillac has shown the first images of the new high-performance SUV. The 2023 Escalade V will be the first SUV to bear the "V" badge, and while Cadillac has yet to release any technical details, the design of this burly beast is on full display.

The front bumper of the Escalade V is revised. Instead of a long trim piece stretching across the bottom to link the LED running lights, a chunky lower grille juts out, flanked by the LEDs which gain a vent-like trim piece and are carved into the bodywork with a sharp character line. There is also a new front splitter and multi-spoke grey wheels. Quad-tip exhaust and a faux diffuser make up the changes around back, and all of the SUV's trim is blacked out. Of course there are prominent "V" badges on the rear hatch and front doors, and the only interior shot shows another "V" at the base of the steering wheel.

Cadillac also released a brief video, providing another chance to listen to the supercharged 6.2-liter LT4 V-8 that is expected to reside under the hood. The same engine powers the CT5-V Blackwing sedan, where it produces 668 horsepower and 659 pound-feet of torque. It will likely be detuned in this application, but the Escalade V should maintain a healthy horsepower advantage over the 420-hp 6.2-liter V-8 powering lesser Escalades. The video reveals the Escalade V will have a redline around 6200 rpm, 300 rpm lower than in the CT5-V Blackwing.

While both of the Escalade V models seen in the new photos are the standard-wheelbase model, our spy photographers recently caught a long-wheelbase Escalade ESV version of the V during testing. Cadillac had previously said that the CT4-V and CT5-V Blackwings would be the final gas-powered V cars. Unless Cadillac gets the sudden urge to build V models of the XT4, XT5, or XT6, the Escalade V could be the last gas-powered V-series model ever. More detailed technical information should arrive soon, but until then we will have to be satiated by the sound of the growling V-8.