Fieros Forever owner is giving away what's left after the Sanford Dam failed, sending 10 feet of water through the town.

Tim Evans had 19 cars at his shop, Fieros Forever, when word came to evacuate. Last week, after days of torrential rain, Sanford Lake—about 10 miles north of Midland, Michigan—was threatening the town below the dam. So Evans evacuated to Midland, leaving his cars and hoping for the dam to hold. It didn't, sending 10 feet of water through town. Now he's sorting through the aftermath, which includes debating Pontiac Fiero values with insurance adjusters who might not appreciate the finer points of an IMSA race replica. 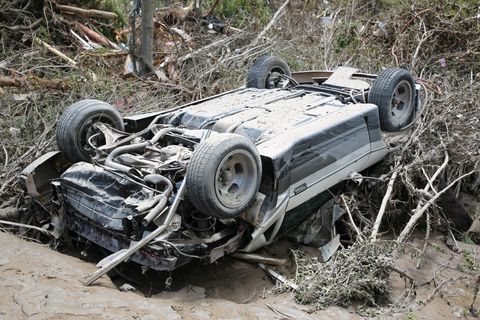 Evans's stash of mid-engine Pontiacs included everyday drivers as well as some of the more esoteric branches of the Fiero family tree. There was a car with a Lamborghini Diablo body kit and another with Countach garb. There was a custom convertible, an Indy Pace Car, and a car with a supercharged 3.8-liter V-6. He had a blue car, which might not sound like a big deal, but Pontiac only built about 4400 blue Fieros out of more than 350,000 cars. 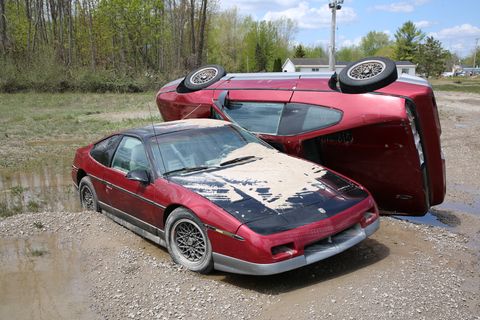 One 1988 Formula lost to the flood waters had only 7000 miles on it. "GM spent $30 million developing a new suspension, so I bought that one to find out what all the fuss was about," Evans says. Like most Fiero admirers, he laments the fact that GM killed the Fiero instead of continuing to develop it. "The Corvette wasn't perfect at first, either," he says.

Evans, an architect, drove his first Fiero in 1984 and loved its design. He couldn't afford one then, but bought an '84 a few years later. Then he upgraded to an '85 with a V-6, followed by a fastback '86 GT. Eventually, he launched Fieros Forever, which became a dealership, service center and museum for the Fiero faithful. "I had enough parts, new and used, to build new cars, almost," Evans says. Among that stash: a 232-horsepower Super Duty four-cylinder race engine, which is what Pontiac installed in the three Fieros that actually paced the 1984 Indy 500. "They weren't going to pace the Indy 500 with 92 horsepower," Evans says. 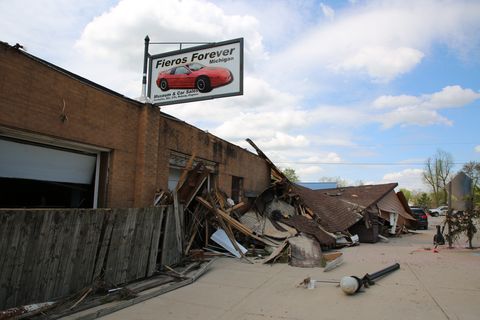 While the flood claimed 19 cars, Evans actually owns 20. That 20th Fiero, a 1986 T-top GT, was parked at his house, above the dam, and thus escaped unscathed—ironically, because it was being repaired from flood damage. "Three years ago, the dam was spilling over and we lost eight cars from flooding, plus two that were hit by a phone pole that fell over. This was one of the cars that got hit by the pole, and it was almost finished. It was ready for windows but didn't have them, so I took it home." 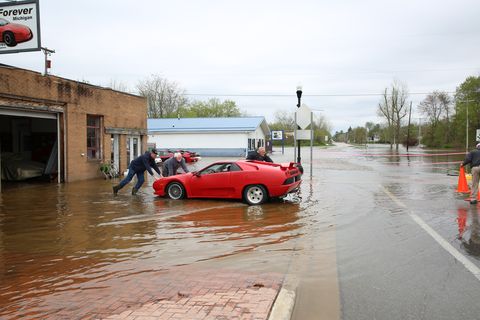 Before the flood, Evans was preparing to wind down Fieros Forever. He'd let his dealer license expire and contacted a company to sell his collection of cars and parts. Now he's digging out cars and trying to explain the cost of a Diablo kit to an insurance company. But while Fieros Forever is finished, Evans isn't finished with Fieros. He just won't have 20.