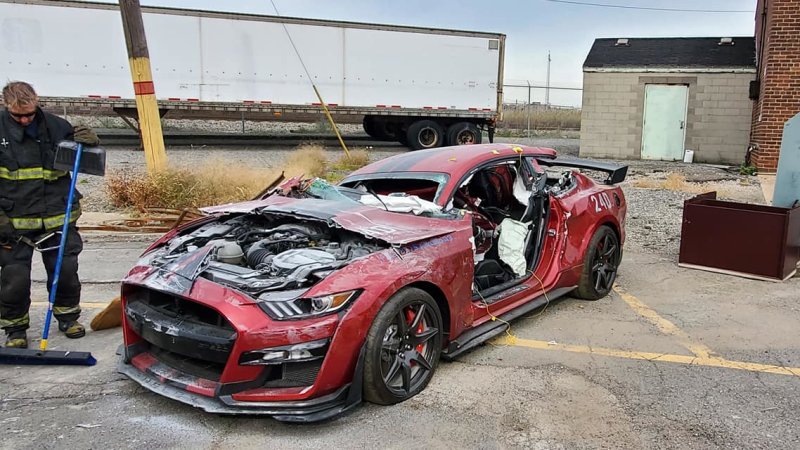 For a firefighter, the task of cutting into a modern automobile, complete with airbags, wiring and super-hard metals, is more difficult than it sounds. For an automotive enthusiast, seeing the damage caused to a 2020 Ford Mustang Shelby GT500 after it was ripped to shreds to train those firefighters how to properly dissect a car and extract passengers is more painful than it should be. But before we get our pitchforks and start burning things down, there's one important fact that changes our mindset when viewing these pictures: This 'Stang was headed to the crusher.

GT500s that are eligible to be sold to the public start at $74,095 (including destination but excluding gas guzzler taxes). The Rapid Red example used by the Dearborn Fire Department for testing and training purposes is fitted with the optional Carbon Fiber Track Pack, which includes goodies like 20-inch carbon wheels, an outlandish rear wing and Recaro front seats (the rears are deleted). That's an extra $18,500. We'll assume the racing stripe is vinyl ($1,000) and not hand-painted ($10,000), but even so, the GT500 seen torn up in these shots would easily be pushing $100,000.

Except that this particular Shelby isn't likely worth much more than the price of scrap metal. According to Facebook, Ford donated this GT500 to the Dearborn Fire Department specifically for this purpose. It surely was headed to the great car crusher in the sky after it was used and abused by the firefighters, and it was destined to end up there one way or another. Preproduction cars like this one are not certified for road use and are used in all kinds of cringeworthy ways that allow actual production models to be properly tested and guaranteed roadworthy.

Put simply, this is one of what we're certain is many GT500s that were never intended to see the light of day outside of Ford's watchful eye. So let's not shed a tear over this one. Let's instead just be glad it was mutilated for a worthy cause.