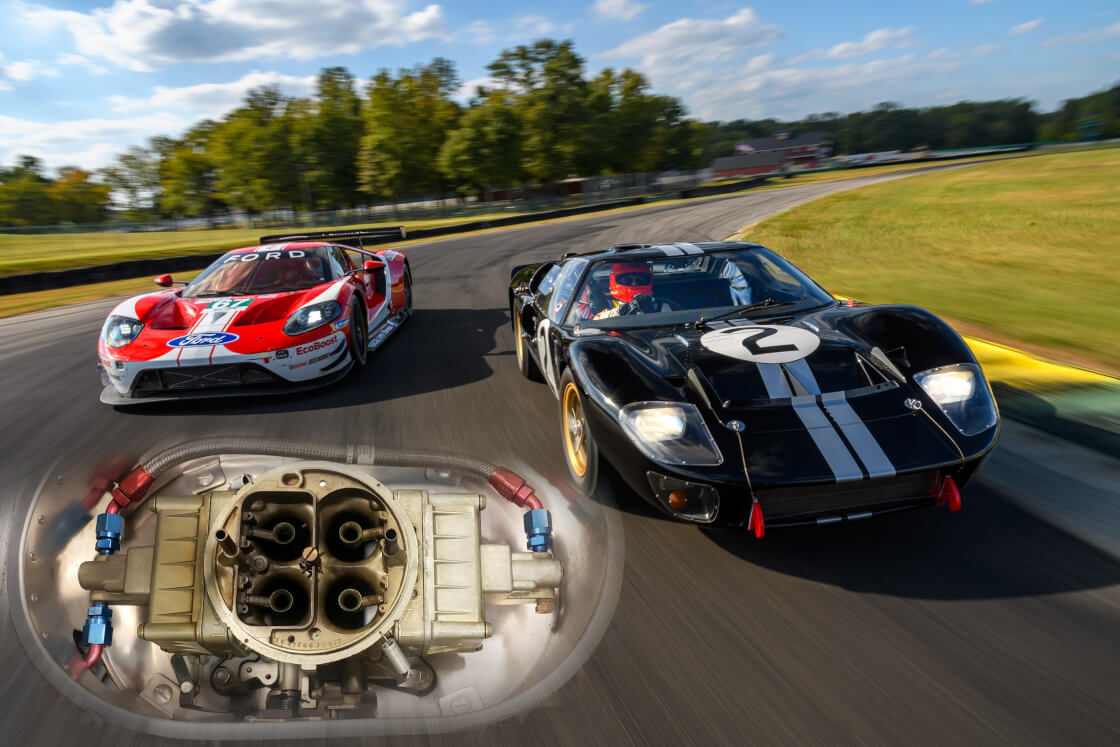 Holley carburetors have won countless championships, but did you know that Holley helped Ford win arguably the most prestigious race in the world, the 24 Hours of Le Mans?

Back in the 1960's, Ford's "Total Performance" program was focused on dominating motorsports. Ford wanted to impress the world with its sports cars, and the crown jewel of sports car racing was the 24 hours of Le Mans. The problem was: they didn't have anything to compete with Europe's offerings. The solution? Buy Ferrari.

But Enzo Ferrari pulled the rug out from under Henry Ford II ("The Deuce") in the closing stages of Ford's attempt to buy Ferrari. The Deuce was so steamed he set out to beat Enzo in a grudge race on an international sage: France's 24 Hours of Le Mans. Ford would leverage its industrial might and engineering prowess to extract his revenge on Enzo Ferrari, and in the process, show the world what good ol' American ingenuity could do. 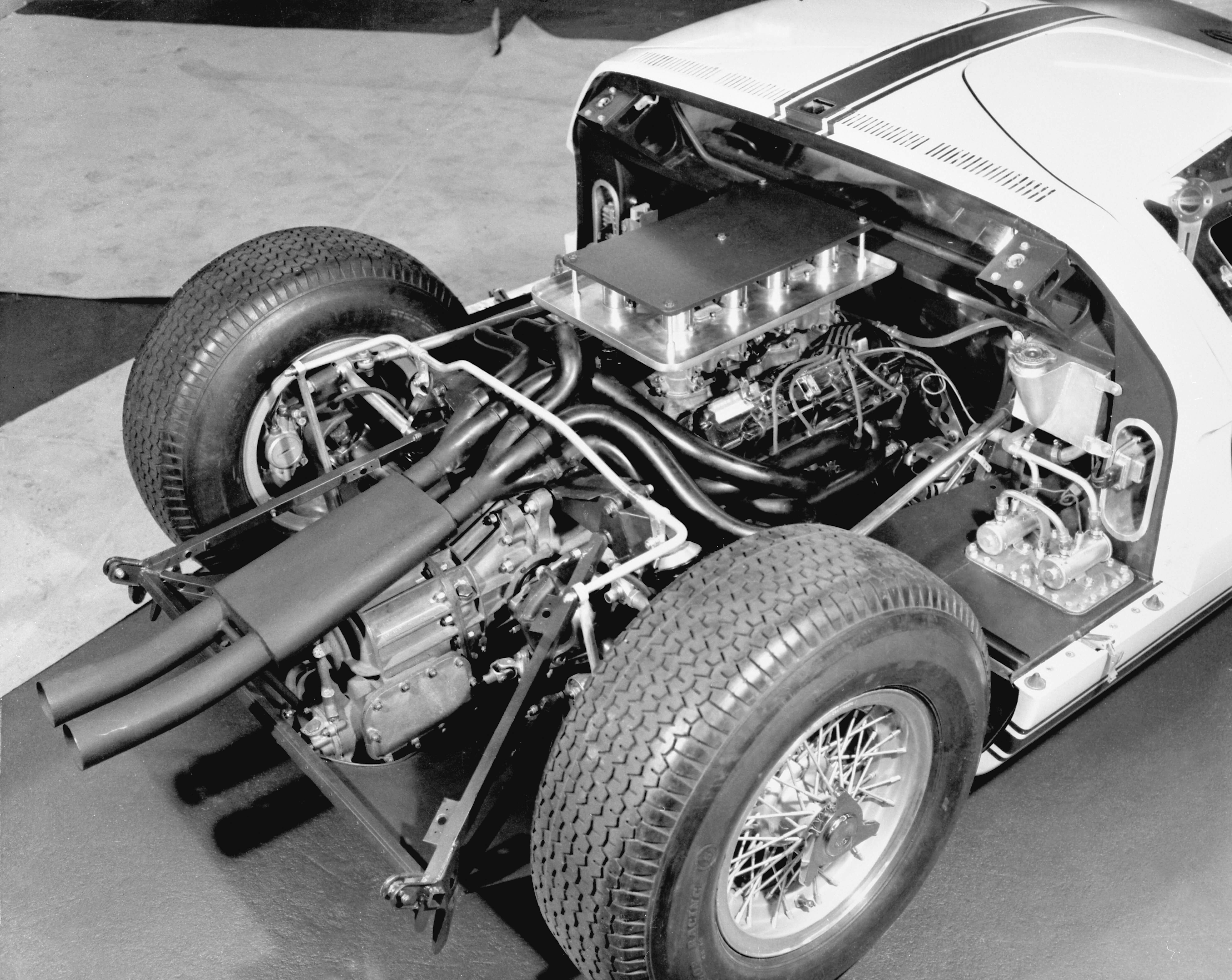 In 1964 and 1965, the Ford GT MK1 was powered by a Ford 289 small-block V8 topped by four Weber carburetors. The engine was powerful but didn't have the reliability needed to keep up with Ferrari for 24 hours. (Photo courtesy of Ford Motor Company)

The plan didn't go so well…at first. The red Italian cars screamed around the track with small-displacement, high-revving motors that were as complex, sophisticated, and fast as their drivers. Ford contracted British outfit Lola Cars to build a chassis based on the Lola Mk6 and power it with a 289 cubic inch small block V8. The results were less than stellar. Teething problems, failures, and micromanagement plagued the program for the first two years. His pride on the line, Henry Ford's grandson was losing patience. For the 1966 race, The Deuce handed out "motivational" cards to remind those involved of the stakes. Henry wrote on the back, "You better win."

After two years of embarrassing results, Ford regrouped. Rather than try and beat Ferrari with the finesse of a European approach, Ford went about it the American way: brute force. By this time, Ford knew what kind of performance was needed to win at Le Mans. They reasoned Ford's new 427 FE racing engine they were developing for NASCAR would have the muscle they needed to go the distance without overstressing the engine.

Management of the team also changed. Ford contracted Shelby American to run the racing team so Ford could focus its expertise on the powertrain. Ford pulled out all the stops and dedicated immense resources to the project. An engineer on Ford's Indy engine racing program was brought over to work on the Le Mans GT40: Mose Nowland. 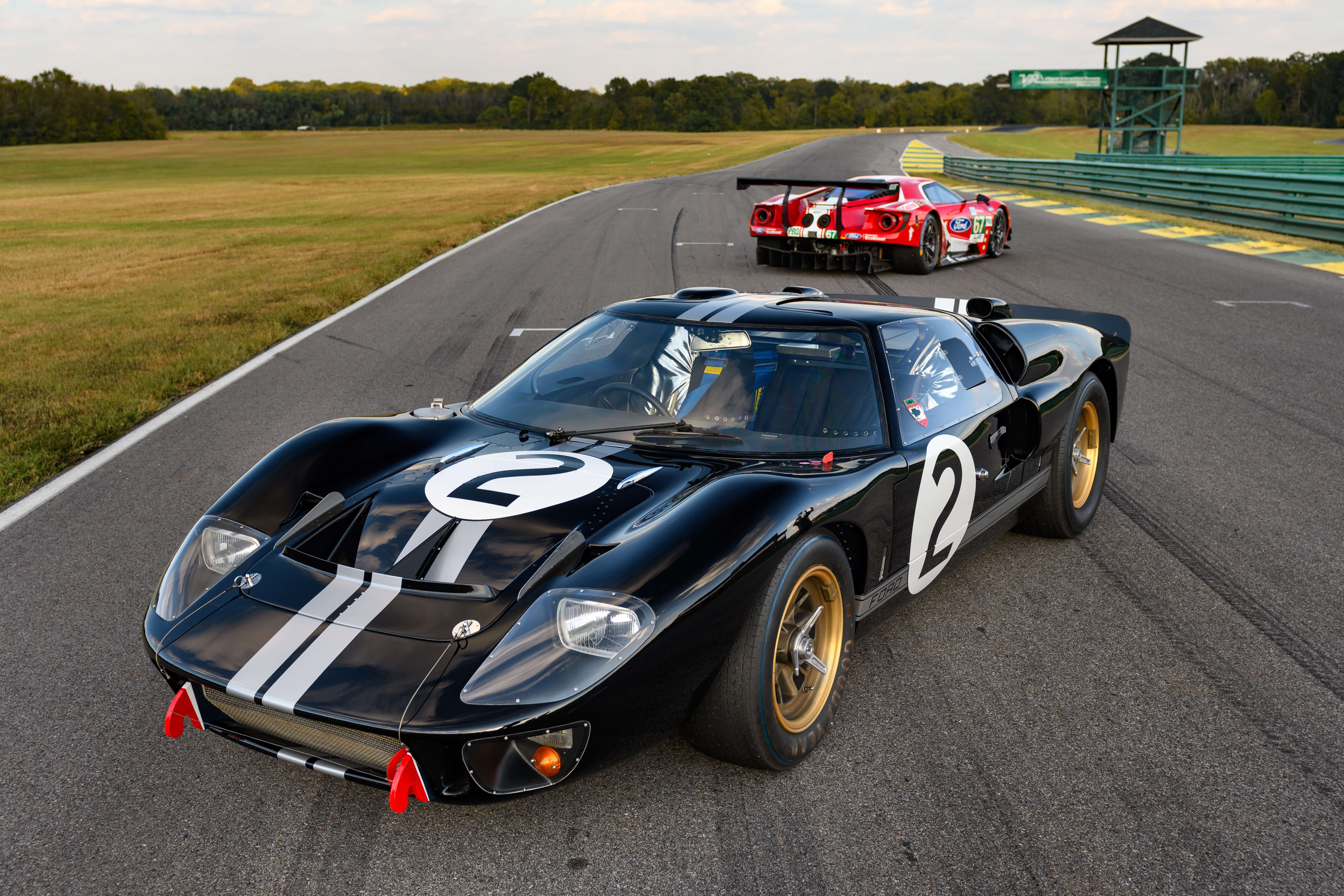 After suffering embarrassing failures in their first two attempts with small-block engines, Ford came to the 1966 24 Hours of Le Mans with a bigger hammer: the 427-powered Ford GT MkII This is THE winning car driven by Bruce McLaren and Chris Amon. The engine was topped by a prototype Holley 4-barrel carburetor that replaced the temperamental Weber carburetors of its predecessor. (Photo courtesy of Ford Motor Company/Wes Duenkel)

That being said, the carburetor atop the GT40 MkII's seven-liter engine was no off-the-shelf fuel mixer. It was a prototype, and Holley engineer Harold Droste was assigned to the project. As Noland recalls, "Harold's job was to come to us. He went to all the testing and the races." The 780-CFM carburetor sprouted many features that would become commonplace on future Holley racing carburetors.

Ford wanted to stick with what they knew well, and they knew a hell of a lot about racing big V8 engines around in circles. Nowland was on the team tasked with making that engine live while turning corners and blasting down Le Mans' Mulsanne straight at over 200 MPH for 24 hours.

We spoke with the brilliant 86-year-old to get the skinny on the trick big-block Ford. Nowland explains, "The engine was basically a detuned NASCAR 427. Dual-plane intake, smaller valves, less compression. We chose 10.5:1 compression because we had to use local fuel, and we didn't know what fuel the French were going to make us use."

Ford GTs with the big-block 472 were dubbed "GT40 MkII," and featured countless improvements over their small-block brethren. A revised clamshell engine cover fed air to a four-barrel Holley carburetor. This was a major departure from the small-block's Weber carburetors. Noland explains, "We were familiar with the Holley because we used them on the NASCAR engines." After suffering embarrassing failures the two years prior, Ford was all about sticking to the tried-and-true Holley. 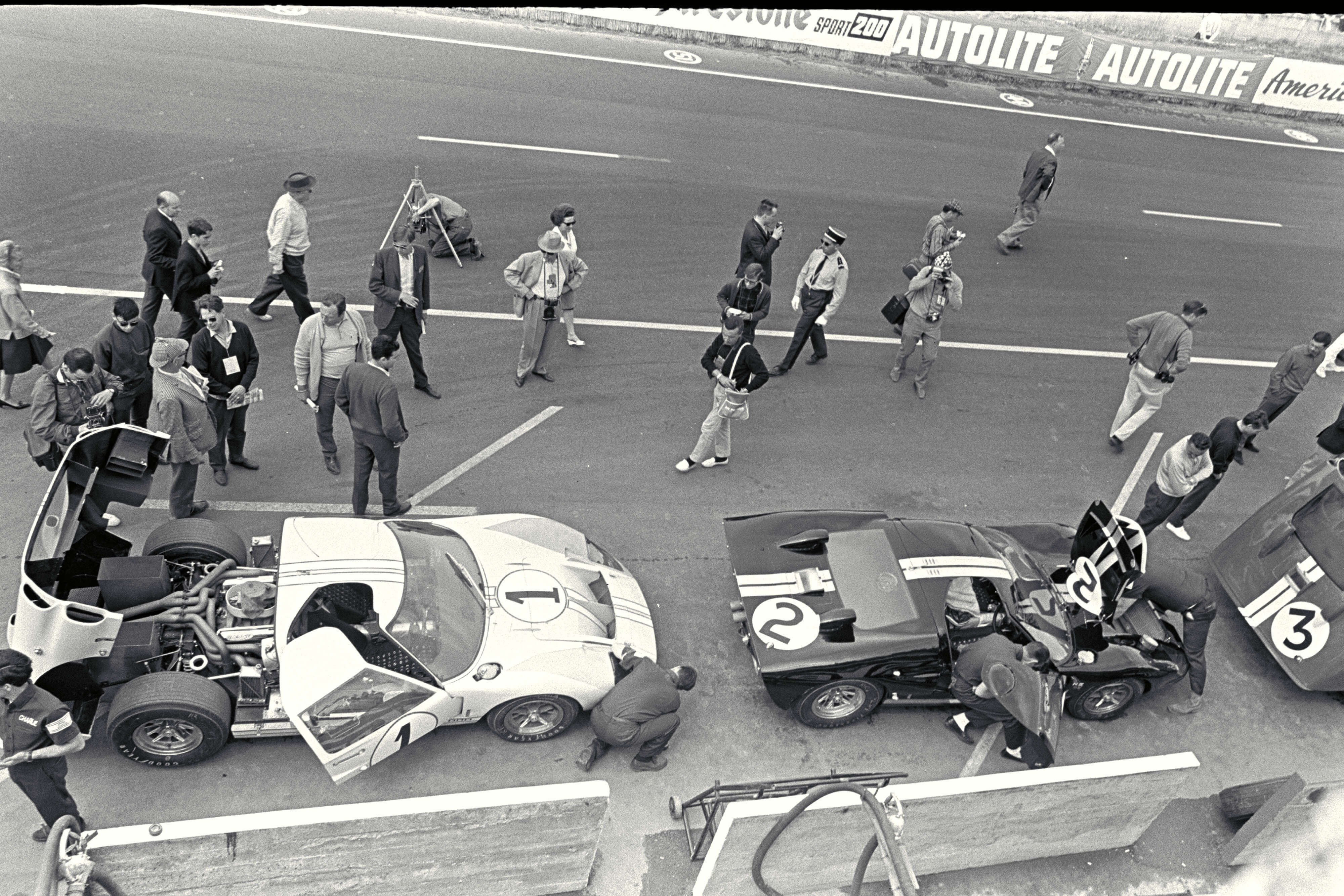 Ford finished 1-2-3 at Le Mans in 1966--much to the relief of both Henry Ford II (and those whose jobs depended upon success)! New Zealanders Bruce McLaren and Chris Amon were awarded the win (the story of the finishing order is a whole story itself). Ford went on to win Le Mans four consecutive times: 1966, 1967, 1968, and 1969. Ford's 1967 win was especially sweet as it was an all-American affair. Where the 1966 winners drove a British-designed chassis and driven by Kiwis, the GT40 MkIV was designed by Ford and Americans Dan Gurney and A. J. Foyt brought home the glory for Ford--and America.

It didn't hurt that the GT40 MkIV was fueled by dual-quad Holleys, either.

Here's some of the pioneering features of the Ford GT on the winning 1966 Ford GT carburetor:

Choke Horn and Linkage Removed: Now commonplace (especially on early carburetors from other "tuners," the GT40's carburetor deleted the choke to allow more air down the venturis.

Roller Secondary Linkage: Some Holley HP carburetors now use this type of linkage to open the secondaries at rate not possible with a simple link. However, the linkage on the GT40 carburetor opened the primary and secondaries simultaneously. This also allowed a center accelerator pump nozzle, which is currently used on some Holleys, including tunnel ram carburetors.

Center-Hung Float Bowls: When developing the Shelby Mustang GT350, Holley found their side-hung float bowls led to inconsistent fuel level (and delivery) while cornering. So, the "Le Mans" fuel bowls were developed. They used a center-hung float that wasn't affected during heavy cornering. The design was later revised to move needle and seat higher on the bowl to avoid heat soak.

Dual Feed Fuel Bowls: Nowland explained, "The tube between the front and rear bowls wasn't big enough" so each bowl got its own fuel supply. Dual feed fueling is now commonplace on high-performance Holleys.

Fuel Bowl Vent Baffles: To keep fuel from spilling out of the vent tubes under acceleration and braking, baffles (or "whistles") were added to the fuel bowls. 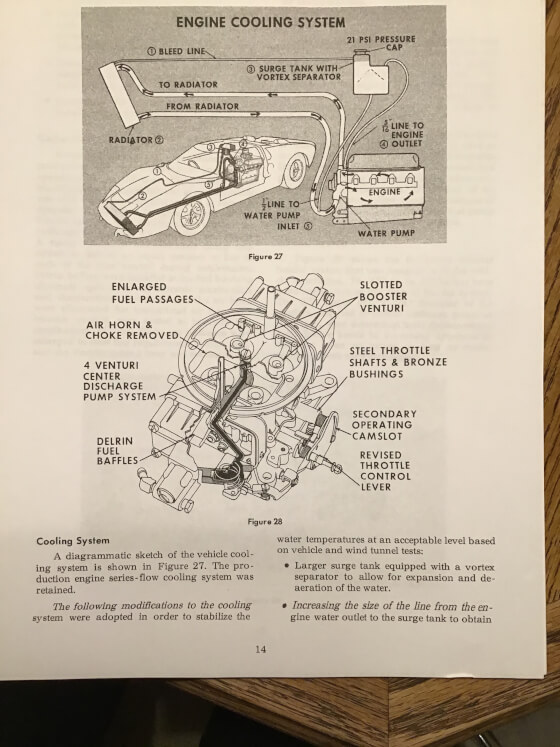 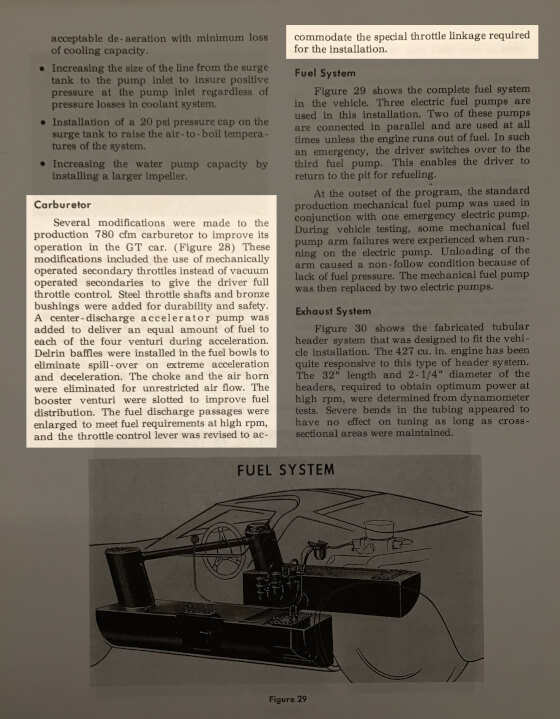 Nowland sent us copies of an SAE paper that highlighted the unique features of the four-barrel Holley carb. (Photos courtesy of Mose Nowland) 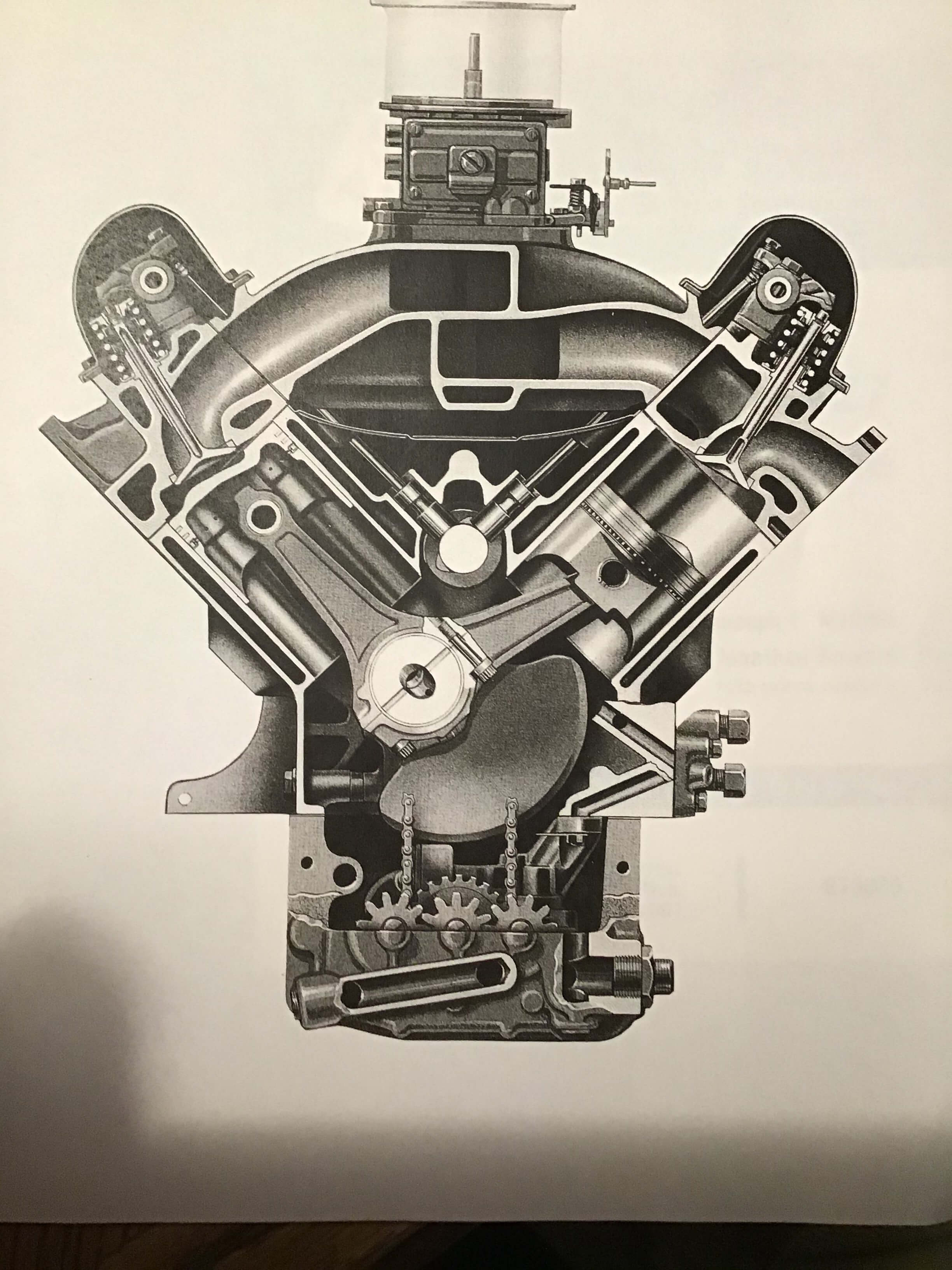 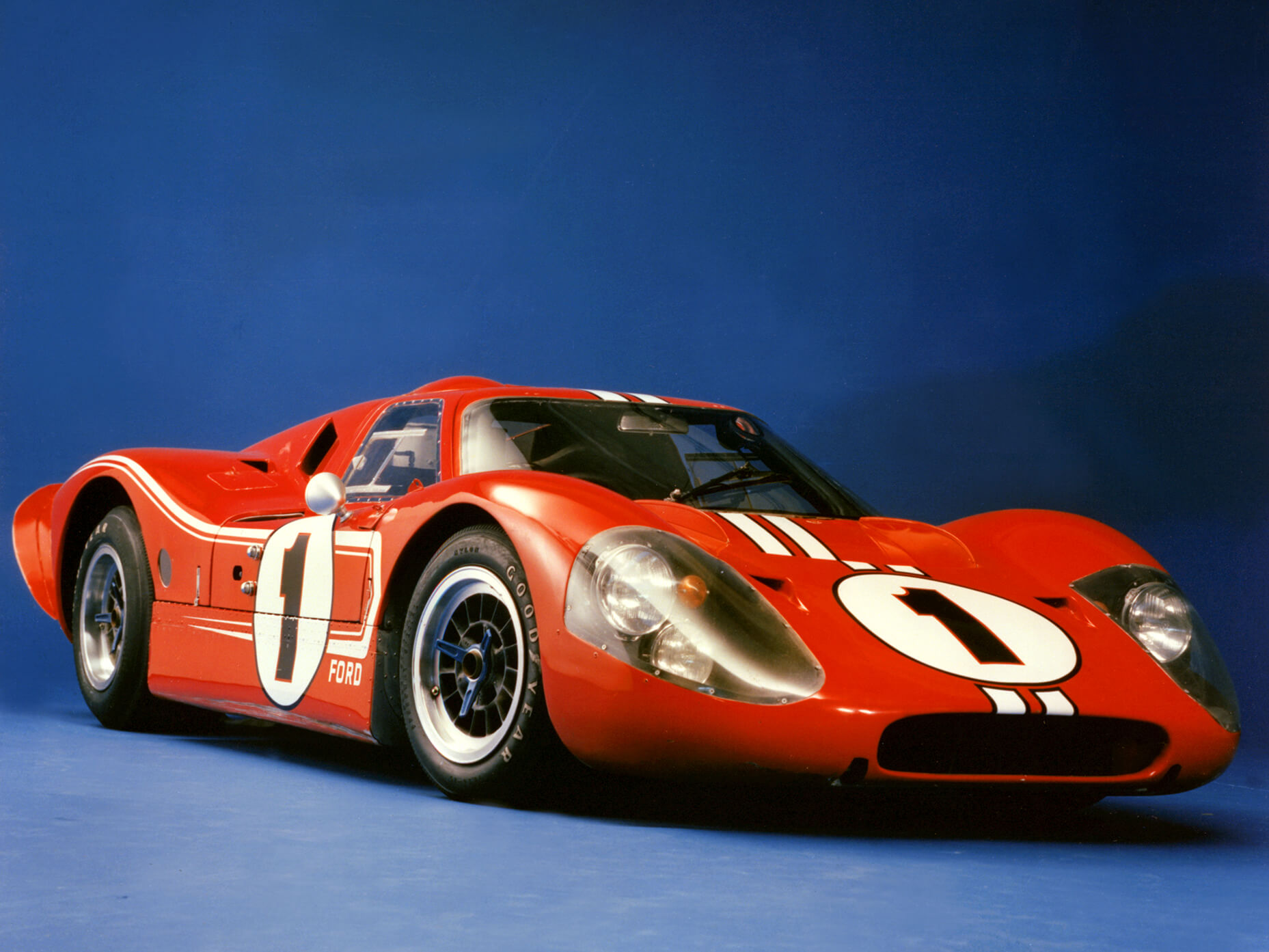 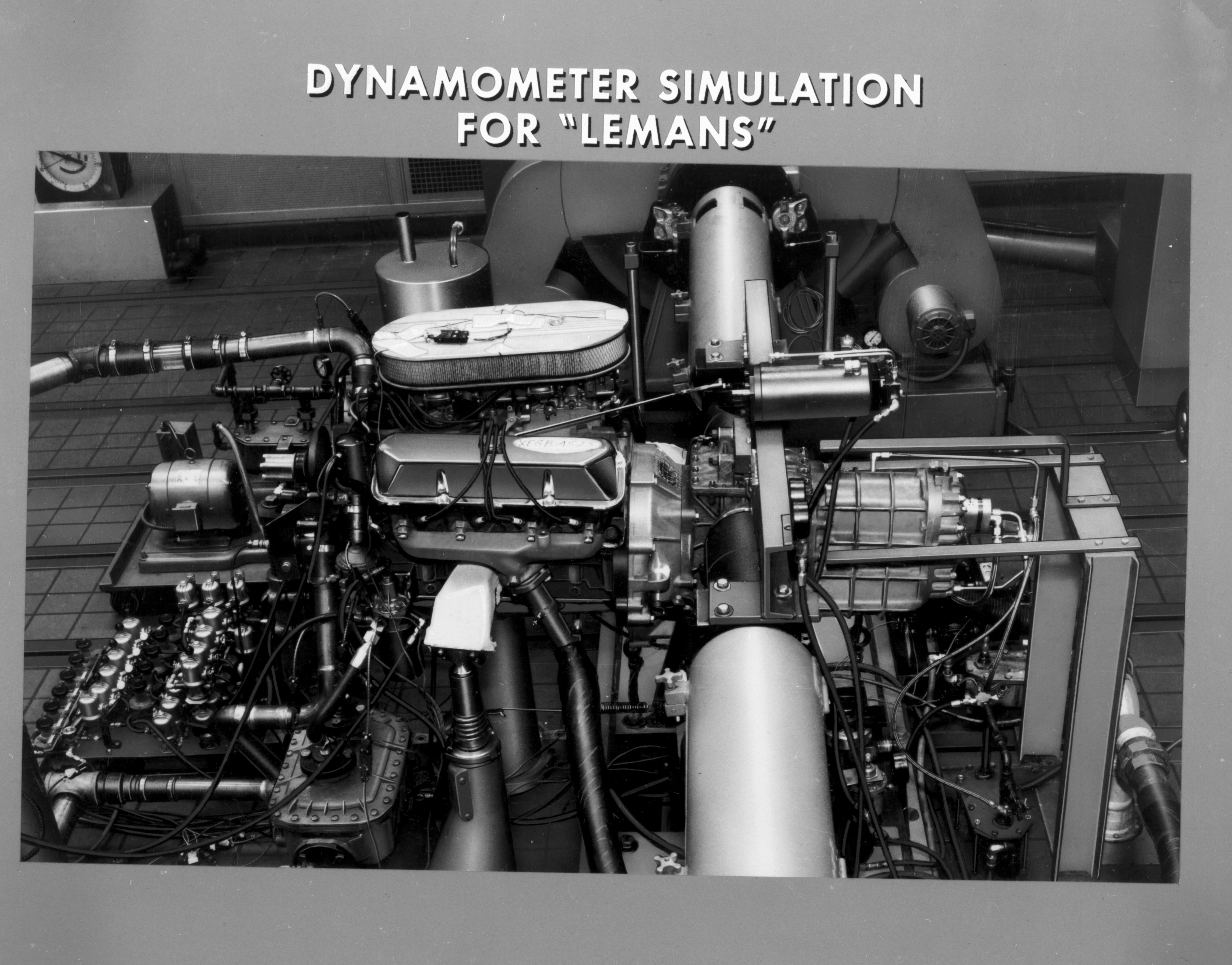 Here's the GT MkIV's 427 FE engine on Ford's special Le Mans test stand. Note the dual quad Holley setup used for 1967. The machine "drove" the engine around the circuit to simulate a lap at Le Mans. According to Mose Nowland, they used this stand leading up to the 1966 race. "A week and a half before heading to Le Mans in 1966, we ran an engine on the stand for 24 hours. When it was done, we immediately tore down the engine. Everything looked good, so my boss said, 'Why don't we put it back on the stand, run it again, and see what happens?' We put on a new set of head gaskets and reused everything else. We started it back up and I got on a plane to France. The next day, I called Detroit and asked how long it took to blow up. They said, 'It never did.' That engine passed with flying colors. It ran over 6,000 racing miles without any problems." (Photo courtesy of Ford Motor Company) 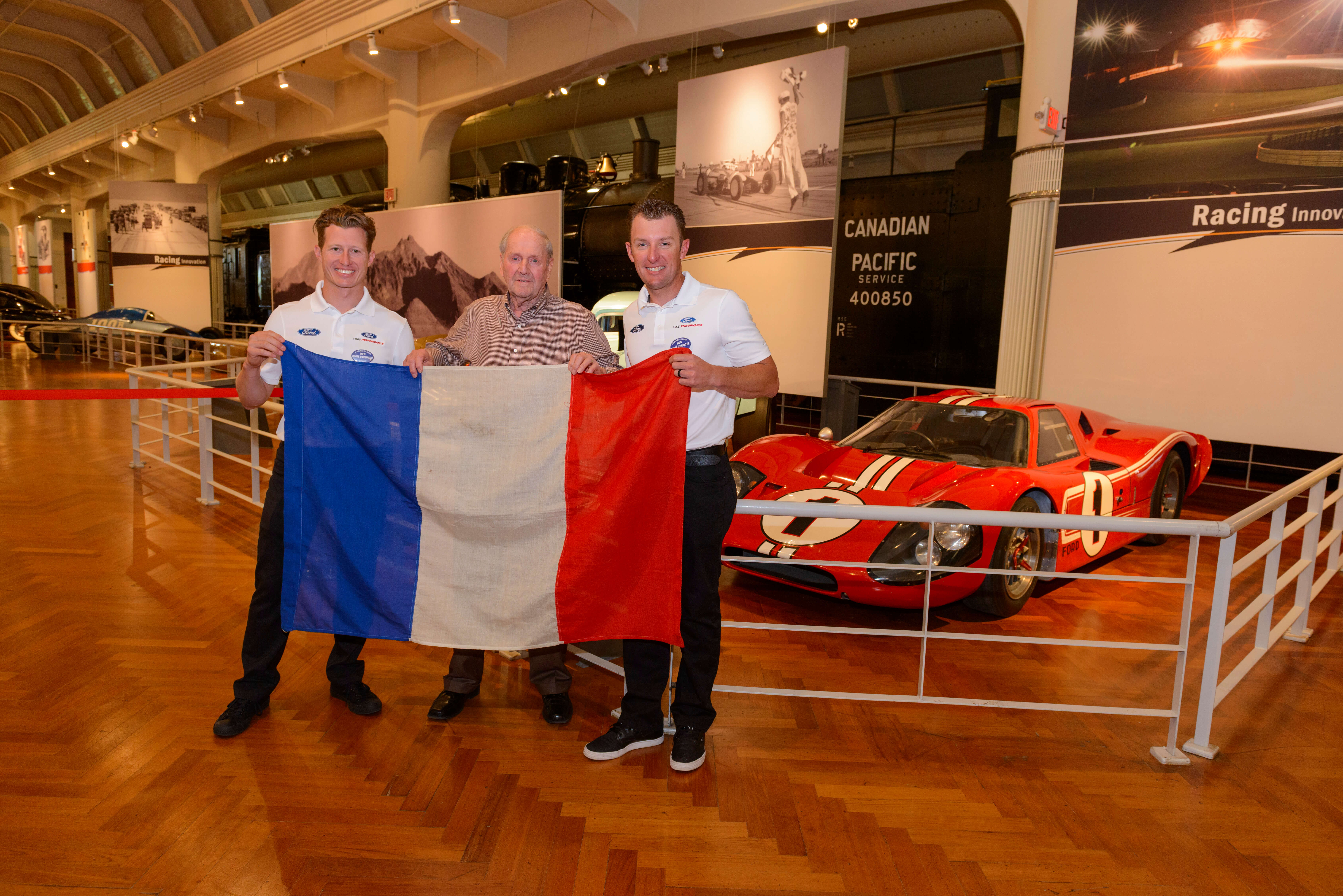 Mose Nowland (center) started his career at Ford in 1955, and at 86 years old, still gushes about his time on the Ford GT program. He's flanked by modern Ford GT racing drivers Ryan Briscoe (left) and Joey Hand (right). They're holding a French flag that Nowland "borrowed" trackside at Le Mans after Ford's win in 1966. The Australian and American drivers took the flag along with them back to France in 2016 as a good luck charm. It worked. The No. 68 Ford GT driven by Hand and Dirk Müller came home first in the GTLM class…beating Ferrari, again. (Photo courtesy of Ford Motor Company/Wes Duenkel) 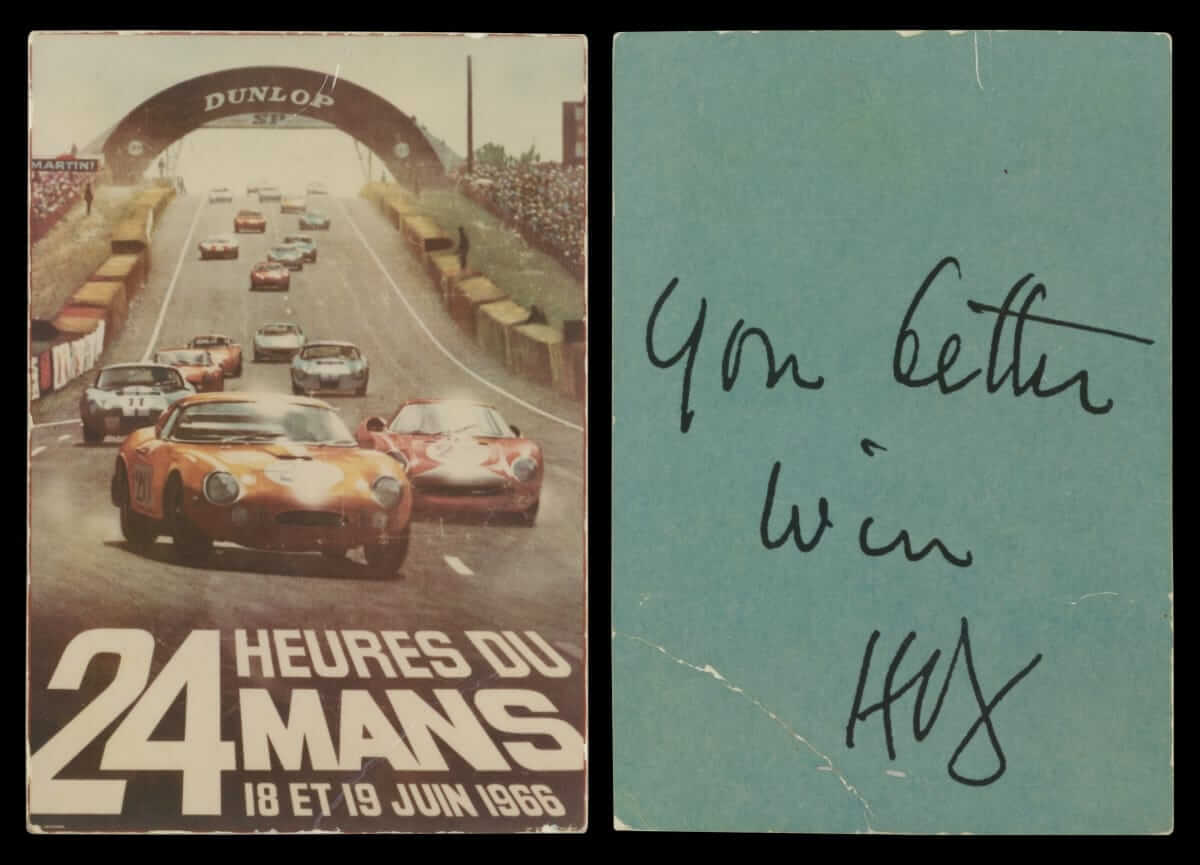 Henry Ford II was an imposing figure. "The Deuce," as he was known, is described as one of America's last tycoons. After a deal to buy Ferrari soured, The Deuce wanted to beat Enzo at his own game: Le Mans. After two embarrassing years, The Deuce's patience wore thin. To stress the importance of winning Le Mans in 1966, Mr. Ford pressed these cards into the hands of his executives. The inscription on the back said it all. When winning meant their careers, Ford relied on tried-and-true Holley carburetors to deliver the goods. (Photo courtesy of The Henry Ford)