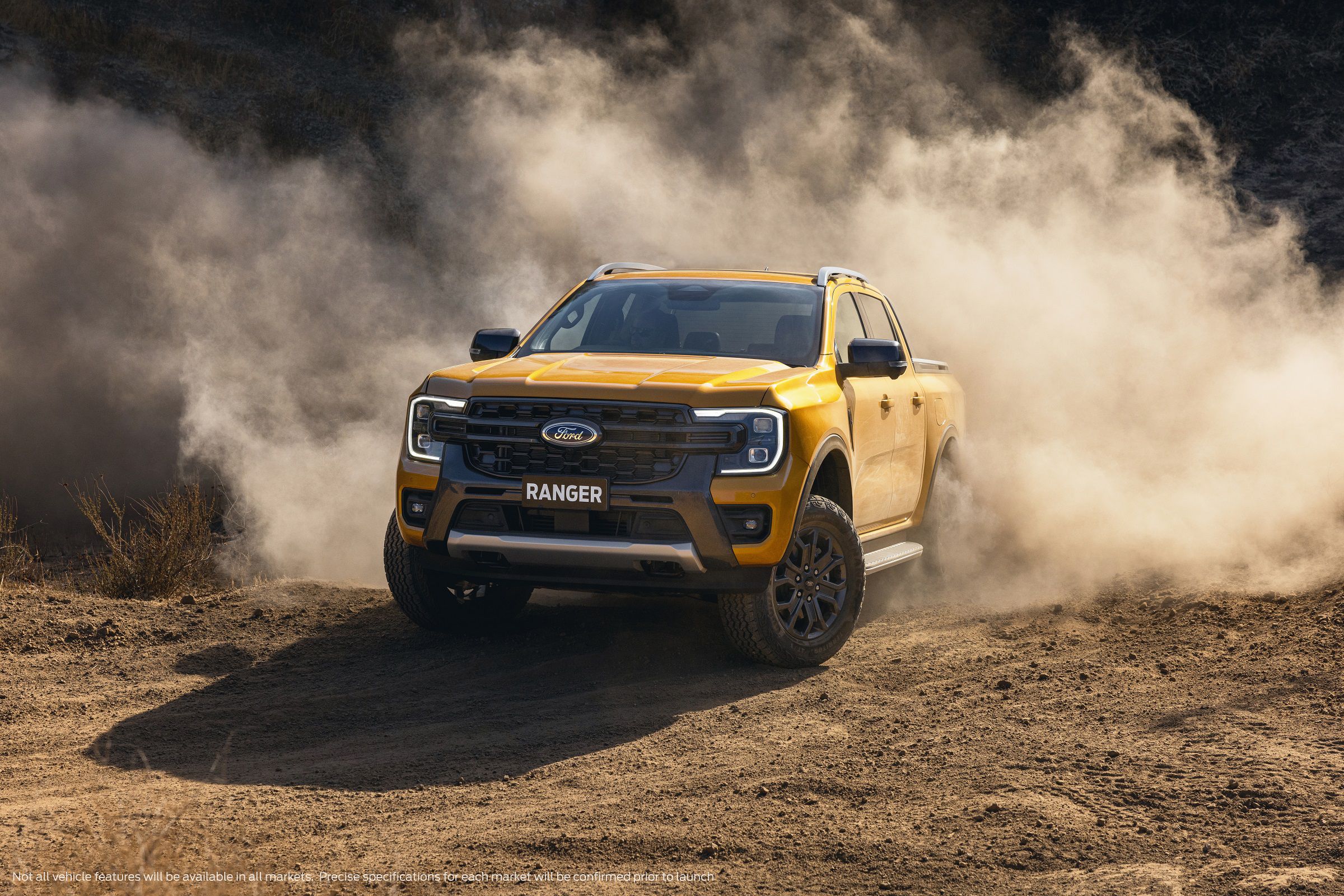 Ford's latest is ready for global markets, but we in the US and Canada will have to wait a little longer for our next-gen midsize pickup.

We've only had the Ranger back in America for a few years, but the rest of the world has been enjoying this midsize truck for ages -- and now, there's about to be a new one. On Wednesday, Ford announced its next-generation 2022 global Ranger, and we're already jealous of the truck that'll soon be available to folks abroad. (Ford officials tell Roadshow that a new North American-spec Ranger is coming, but it can't say when.)

The most noticeable difference between our current Ranger -- a dated truck -- and this new one is the exterior styling. The new model borrows from the Maverick and a little from the Bronco, which makes for a boxier, more solid-looking midsize truck. It's not wildly different from the current Ranger, but it's more modern and different enough to make an impression.

We're very limited on our Ranger powertrain options in the US, but elsewhere in the world, they have all kinds of gasoline and diesel engine options, including a beefy V6 turbodiesel. Additionally, global consumers now get the 10-speed automatic transmission that we know from many current Ford products. As you'll see in the press photos, many worldwide markets also get the option of a manual transmission, which makes us pretty jealous. 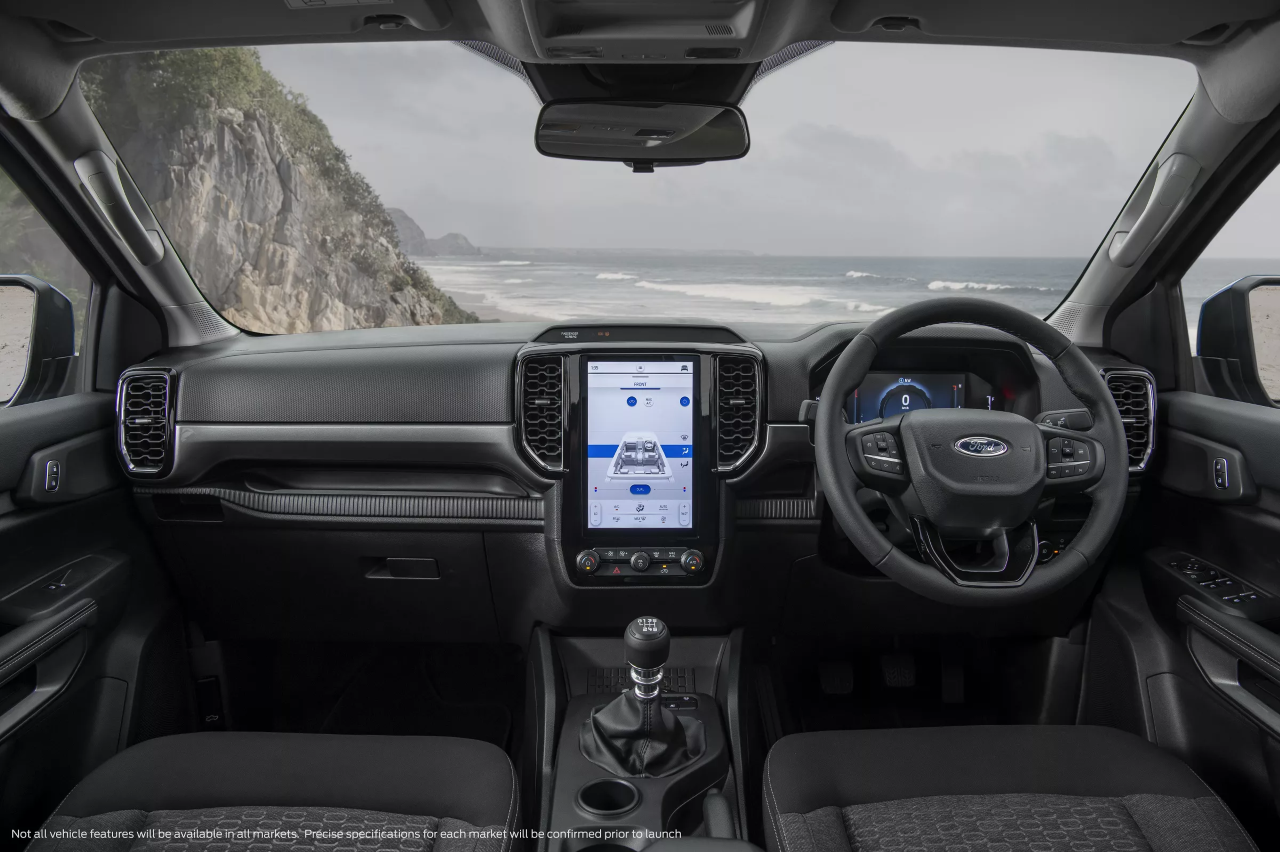 The new Ranger gets a big step up inside with a portrait-style infotainment screen that runs Sync 4. Ford

Inside, things look good, with the main focal point of the interior being the 10.1-inch or optional 12-inch touchscreen infotainment system that's running Sync 4. Like the Mustang Mach-E, which also uses Sync 4, the Ranger has a ton of vehicle settings and mode selections going through the screen, rather than with physical controls. We don't love this approach from a functional standpoint, but it does clean up the look of the interior, and frankly, today's North American Ranger has fallen behind in terms of interior tech and cabin finishes.

Other super cool global Ranger features include a new integrated rear side-step behind the rear wheels which should make bed access a lot easier. Like today's full-size F-150, there's also a neat zone lighting system that can be controlled either through the vehicle screen or through the My Ford Pass app, which should prove a boon for people who camp out of their truck. 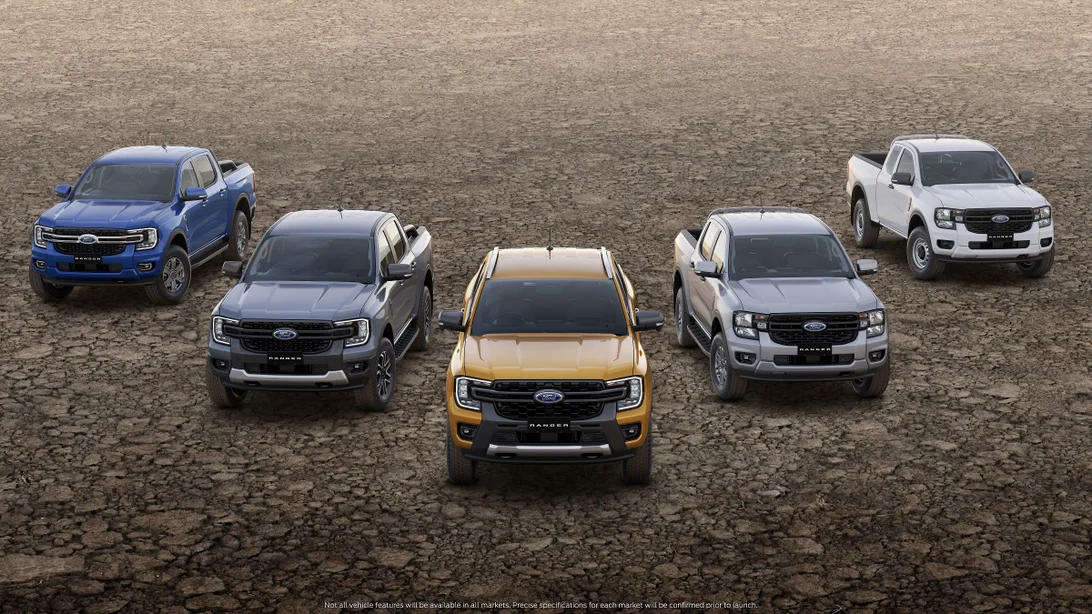 Ford's global Ranger is debuting in two flavors: XLT and Wildtrak, with the latter being geared towards off-roading and other outdoor activities. Not long after the Ranger launches, Ford will have approximately 600 accessories available for the truck, including a new line of off-road accessories developed in concert with legendary equipment brand ARB.

This new 2022 Ranger for the rest of the world will be produced at Ford's facilities in Thailand and South Africa, with more precise launch dates expected to come soon. Likewise, Ford is keeping mum about pricing at this time, too. Us? We're just hoping the next North American Ranger bows soon, because it's fallen behind the rest of Ford's truck lineup in terms of tech and refinement -- and that's true even when compared to the far cheaper unibody Maverick.

VW's International Harvester Scout will reportedly be a true off-roader