Could Ford have been the first carmaker (okay, truck maker) to mass produce gas turbines for the road? 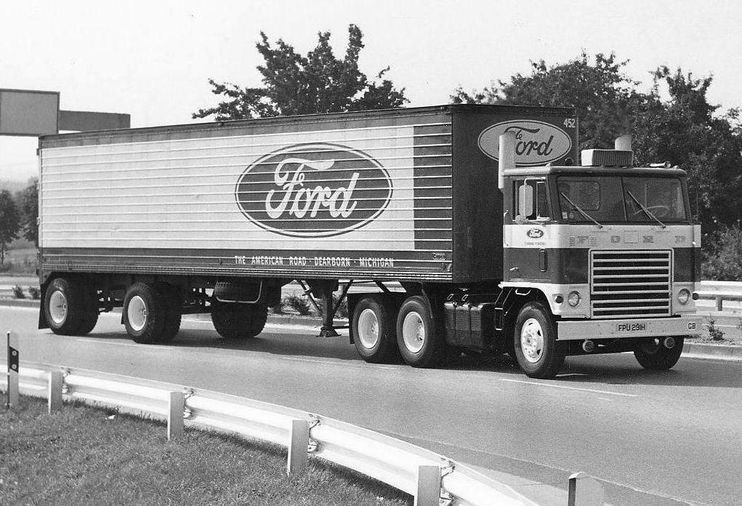 Ford Media Image
The Seventies were supposed to be the decade for gas turbines - touted for decades as the engines of the future - to finally take to the roads en masse. And while each of the Big Three had its own gas-turbine programs, industry observers expected Ford to become the first to market such an engine. Yet, as it turned out, the dawn of the Seventies proved the end of Ford's gas-turbine ambitions entirely.
As noted previously here, Ford's turbine program dated back to the early to mid-1950s, a time of grand conjecture of the future of transportation. Ford's concept cars "featured" gas turbines, even if the concepts never actually had one installed, and Ford designers smitten with the idea (or trying to impress managers who were smitten with the idea) worked mentions of turbines into their renderings and clay models. Ford even toyed with a turbine-powered tractor and a Thunderbird or two.
Ford's primary interest in turbines, however, focused on using them to power semi trucks. As noted in a May 1967 Car Life survey of the state of automotive turbine technology, each of the Big Three had varying ideas about the best application for turbines. Chrysler engineers preferred that the engines power passenger cars. GM believed turbines made the most sense in transcontinental coaches and construction equipment. Ford, "which in many respects appears the most advanced in the field, has consistently worked toward development of turbine power for long cross-country heavy-duty highway trucks."
Plenty of truck makers had already investigated the possibility of turbines to some degree. Despite certain drawbacks (maximum torque available at zero output shaft speed, for instance), gas turbines could produce more power in a smaller package than the diesels that had become standard in heavy hauling, and the coming Interstate Highway System would provide greater opportunities for the sustained speeds at which turbines return greater fuel economy. Kenworth borrowed some turbines that Boeing had built to fulfill a U.S. Navy contract and ran them up and down the West Coast in the Fifties; American-LaFrance tried out a few turbines in the Sixties; GM showed off its Bison turbine concept truck at the 1964 New York World's Fair before trialling its experimental Turbo Titan III; and Leyland showed off an experimental turbine truck in 1968.
Curiously, according to Ford materials at the time, the remnants of a Ford research and engineering project for the U.S. Navy also ended up producing the 600 hp gas-turbine engine - designated 705 - that Ford used in its Truck of Tomorrow (a.k.a Big Red), the experimental over-the-road truck that also debuted at the 1964 New York World's Fair. Big Red made the show circuit for another few years with Ford touting its 600-mile range and its ability to cross the country's highways in comfort.
Ford very well could have used that publicity tour for real-world testing too. Under Ivan Swatman, the chief engineer of Ford's turbine program, Ford continued to develop the 705 into the 375 hp 707, a single-stage gas turbine with a 37,500 rpm compressor speed designed specifically for Ford's W-1000 highway tractor, then in production, according to engineering vice president Herbert Misch, quoted in Car Life. "With additional development, the 707 design will advance to the manufacturing feasibility stage, and - hopefully - should pay off as the first commercially available gas turbine engine in the automotive field," Misch said.
Similarly, Swatman told Britain's Motor Transport magazine “that naturally Ford hoped to be the first in the field with a gas turbine on the market” pending its testing program for the 707, a testing program conducted at Ford's dedicated gas turbine laboratory in Dearborn.
Swatman boasted of figuring out how to build most of the 707 with relatively common casting processes and materials. The main block, bearing housing, and end covers were all cast from nodular iron while the turbine wheels were cast from nickel alloys. But to get the fuel economy out of the 707 that commercial operators required, Swatman and his team had to fit a regenerator - basically a heat exchanger that harnesses the turbine's hot exhaust gases and in turn preheated the incoming air. To ensure the regenerator would stand up to the heat transfer and the temperature difference across its diameter without distorting, Swatman and his team contracted with Corning to produce special ceramic disks that distort by 0.01 inches compared to the quarter-inch distortion of the stainless steel components used in GM's contemporary regenerator-fitted gas turbines. 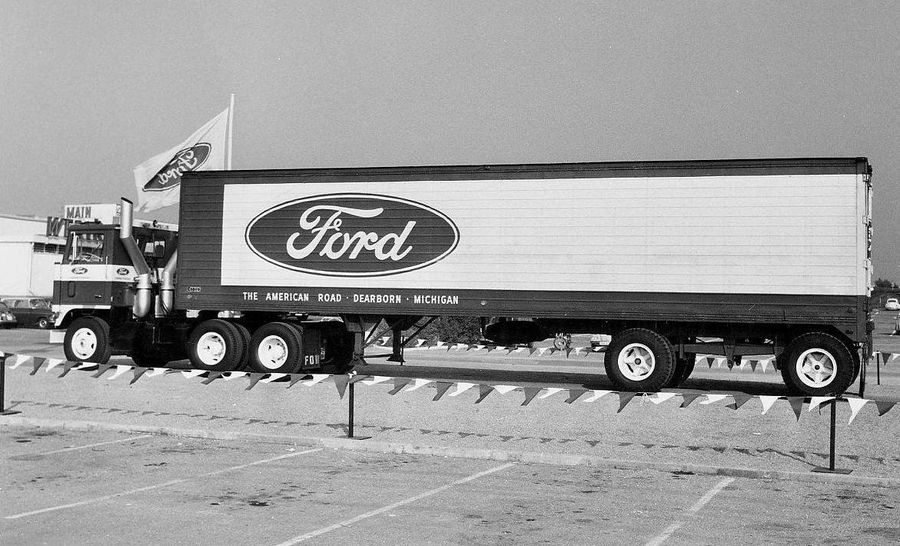 The 707-powered W-1000 debuted in 1966, first in the United States at the American Trucking Association's annual meeting in Washington and then later at the Earls Court Commercial Motor Show in the United Kingdom. It featured a Fuller five-speed transmission and massive twin exhaust stacks just behind the cab and boasted a 2,000-pound weight savings over a conventional diesel.
In the UK, Ford permitted a number of journalists covering the truck industry to road test it. Starting in the summer of 1968, Ford even put 707-powered W-1000s into regular service, shuttling parts and supplies back and forth between Dearborn and Toledo, where Ford would eventually open a plant dedicated to gas turbine production in August 1971 and hire as many as 700 people over the next few years to build the 707 and a planned 335 hp successor to it that Ford placed in an experimental Continental Trailways Silver Eagle coach.
As if that weren't enough, Ford contracted with plastic model company Entex to release a model kit version of the 707, claiming in the description of the engine that Ford "has now succeeded in overcoming the problems previously experienced in harnessing the jet engine" and that turbines could replace piston and Wankel engines as early as 1980. 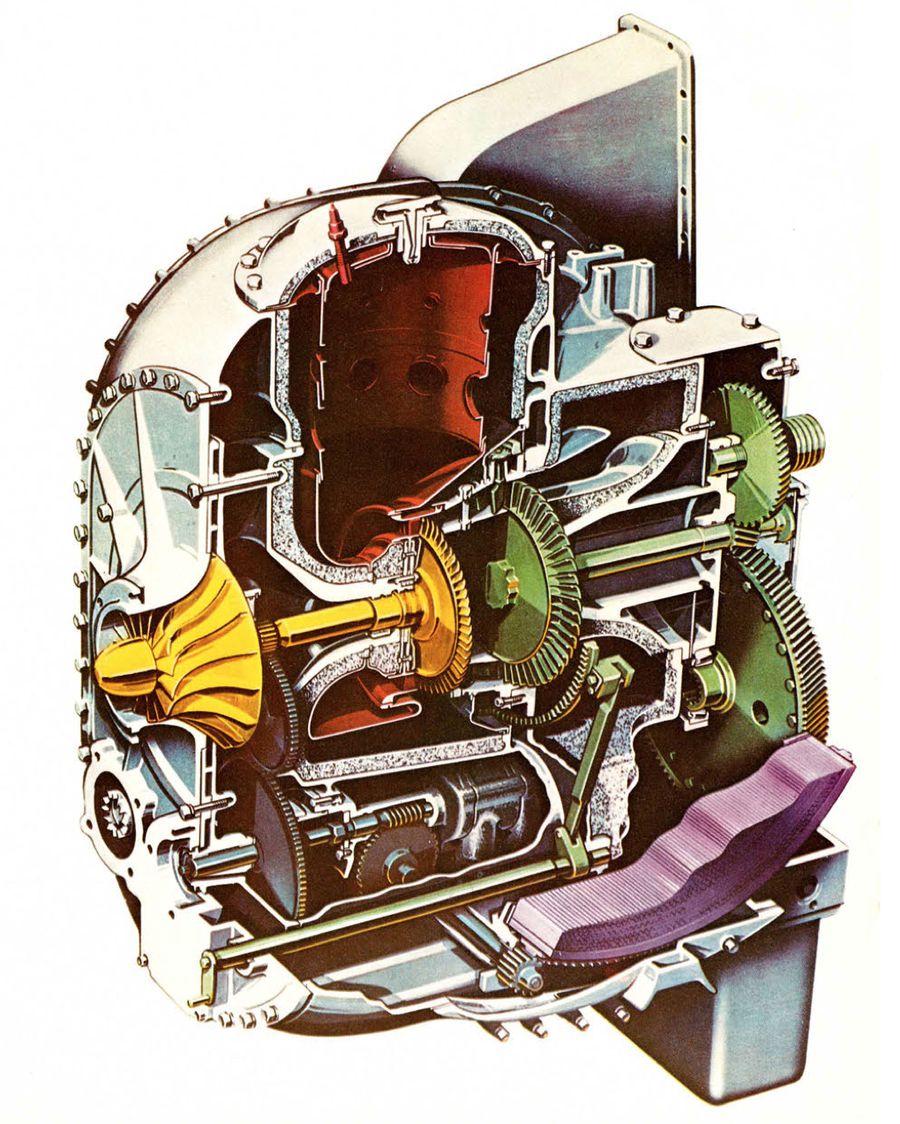 Cutaway of Ford's 707 gas turbine engine.
Everything seemed on track for Ford to fulfill Misch and Swatman's prophecies, but within just a couple of years, it all fell apart. According to John Mortimer's "The 'Nearly' Engine," the 707 continued to suffer from overheating issues, and a poorly timed flood devastated an unnamed single-source supplier's only plant.
(Whether Corning couldn't keep up with automotive-scale production demands for the ceramic regenerator disks, as has been suggested, is debatable. Davis Dyer and Daniel Gross, in their book on Corning, note that the company did have problems meeting demand for ceramic-based catalytic converters, a product that grew out of the company's experience building ceramic regenerator disks, but they make no mention of whether the company could or could not meet demand for Ford 707 gas-turbine regenerator disks.)
Ford, in turn, never put the 707-powered W-1000 into production and in 1973 closed the Toledo plant. Aside from one brief collaboration with Garrett AiResearch in the late Seventies, it appears Ford abandoned all gas-research projects afterward.
Even without supplier issues, it's debatable whether Ford could have successfully marketed the 707 or its successors into the turbulent Seventies. The gas turbine's "equivalent" or "competitive" fuel consumption, as Swatman promised, might not have sunk the engine during the 1973 oil embargo, but the turbine's propensity for emitting nitrogen oxides, especially at higher combustion temperatures, may have made it difficult to pass increasing emissions standards.
Thus the gas turbine, once the engine of the future, appears destined to remain the engine of the future.
SOURCE: HEMMINGS
← Go Back To List