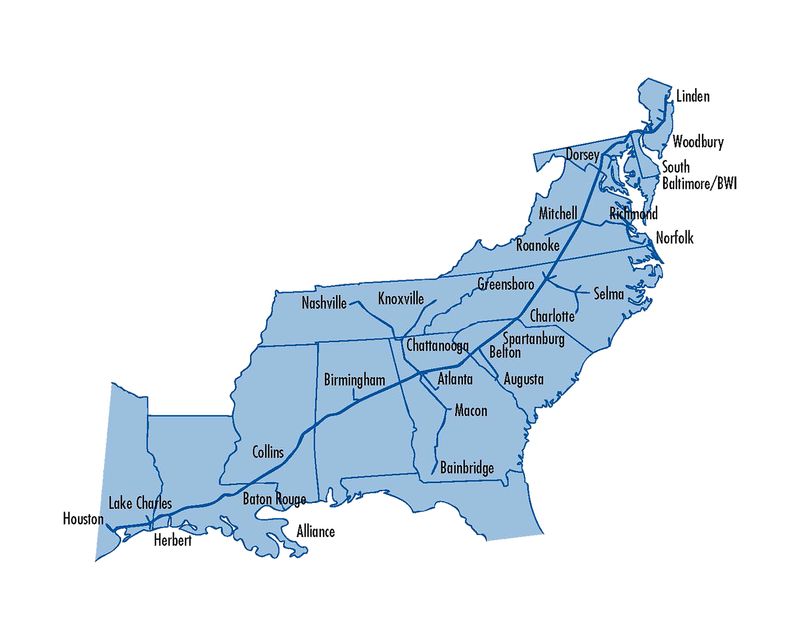 Motorists from New York to Atlanta face a growing threat of fuel shortages and the highest prices in years as a cyberattack that crippled North America’s biggest petroleum pipeline drags into its third day.

Colonial Pipeline has been mum since Sunday, when it said it was still developing a plan for restarting the nation’s largest fuel pipeline -- a critical source of supply for the New York region. The conduit that was shut down since late Friday will only be brought back online when it’s “safe to do so, and in full compliance with the approval of all federal regulations.” The Federal Bureau of Investigation said it’s looking into the disruption.

Auto club AAA warned that pump prices may jump to a seven-year high. Emergency shipments of gasoline and diesel from Texas already are on the way to Atlanta and other southeast cities via trucks, and at least one Gulf Coast refinery began trimming output amid expectations that supplies will begin backing up in the nation’s oil-refining nexus.

The national average pump price rose to $2.967 a gallon on Monday, a 2.4% increase from Friday, according to AAA. The premium for wholesale gasoline in the New York area expanded to its widest in three months.

The attack comes just as the nation’s energy industry is preparing to meet stronger fuel demand from summer travel. Americans are once again commuting to the office and booking flights after a year in lockdown. A prolonged disruption that sends retail prices soaring would further stoke fears of inflation as commodity prices rally worldwide.

Gasoline futures that initially surged as much as 4.2% in overnight trading surrendered most of those gains on Monday.

Landlocked cities are in more danger of fuel shortages than those with access to water-borne deliveries, and if the pipeline remains down for many more days, he’s anticipating a “massive surge” in orders, Boyd said. Sun Coast, which operates about 900 trucks, has delivered emergency supplies during 75 major storms over the past 15 years, including during hurricanes Harvey and Irma in 2017.

Although the attack on the Colonial system is “unprecedented,” the conduit ought to be back in service in three to five days, Amrita Sen, co-founder of consultant Energy Aspects Ltd., said in a Bloomberg TV interview.

Gasoline for June delivery was 0.5% higher at $2.1376 a gallon at 11:24 a.m. in New York. Futures prices have gained 40% this year, helped by the recovery from the worst effects of the pandemic.

With little to no clarity over when the system will return, traders are seeking vessels to deliver fuel to coastal terminals. Four vessels have been provisionally chartered to send diesel or gasoline from Europe to the U.S. Atlantic Coast, according to Danish oil-product tanker company Torm A/S.

Some tankers are also being secured to temporarily store gasoline along the Gulf Coast in the event of a prolonged shutdown, according to market participants who asked not to be identified because the information isn’t public. Meanwhile, Total SE scaled back activity in a key unit at its Port Arthur, Texas, refinery because of the Colonial shutown, according to a person familiar with operations.

Colonial halted all operations on its system late Friday after suffering a ransomware attack that affected some of its IT systems.

The event is just the latest example of critical infrastructure being targeted by ransomware. Hackers are increasingly attempting to infiltrate essential services such as electric grids and hospitals. The escalating threats prompted the White House to respond last month with a plan to increase security at utilities and their suppliers. Pipelines are a specific concern because of the central role they play in the U.S. economy.
It’s an all-hands-on-deck effort right now,” said U.S. Commerce Secretary Gina Raimondo. “We are working closely with the company, state and local officials to make sure that they get back up to normal operations as quickly as possible and there aren’t disruptions in supply.”

The White House pulled together an inter-agency task force to address the breach, including exploring options for lessening its impact, according to an official. President Joe Biden can invoke an array of emergency powers to ensure supplies keep flowing to big cities and airports along the East Coast.

Some rules curbing domestic transportation of fuel have been eased to help deal with any shortages. That doesn’t extend to waiving Jones Act, a measure that would allow foreign tankers to help shuffle more petroleum products between U.S. ports.

“There are ways to get around this,” said Jeff Currie, global head of commodities at Goldman Sachs Group Inc. “Importantly, the Department of Transportation has lifted any restrictions around trucking and boat transportation, which means you can use other avenues of transportation to deal with this.”

Colonial has the capacity to send about 2.5 million barrels (105 million gallons) a day from Houston as far as North Carolina, and another 900,000 barrels a day to New York.

An ocean-going tanker that had been taking gasoline toward the U.S. Gulf stopped on its voyage and is now stationed east of the Bahamas, data compiled by Bloomberg show. If the halt is prolonged, the fuel is likely to fetch higher premiums in the New York Harbor area. 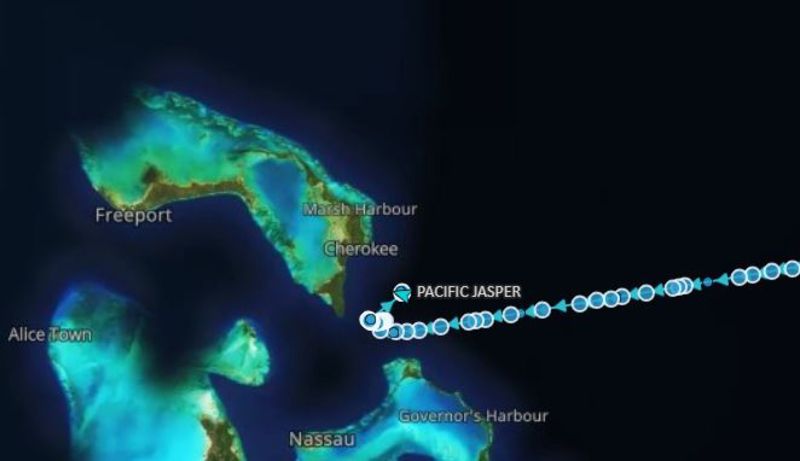 The Pacific Jasper, initially bound for U.S. Gulf, has changed its course near the Bahamas

The attack appeared to use a ransomware group called DarkSide, according to Allan Liska, senior threat analyst at cybersecurity firm Recorded Future. The cybersecurity firm FireEye Inc. said its Mandiant incident response division was assisting with the investigation.

Ransomware cases involve hackers seeding networks with malicious software that encrypts the data and leaves the machines locked until the victims pay the extortion fee. This would be the biggest attack of its kind on a U.S. fuel pipeline.

With gasoline inventories ample, pump prices weren’t expected to tick much higher until Memorial Day at the end of May, which is traditionally viewed as the start of the U.S. summer driving season. If the pipeline doesn’t restart soon it will accelerate the move higher.

“Atlanta will be one of the earlier sore spots, along with eastern Tennessee, and perhaps the Carolinas,” said Patrick DeHaan, head of petroleum analysis at GasBuddy.

The Northeast can secure gasoline shipments from Europe but it will come at an increasing cost the longer the pipeline stays shut. The fuel’s premium to crude in northwest Europe had jumped by more than 5% in intra-day trading earlier on Monday but was still down week-on-week.

Last year, the U.S. imported about 235,000 barrels a day of gasoline from Europe, according to bill of lading and tanker-tracking data compiled by Bloomberg. Stocks of the road fuel in PADD 1 -- the U.S. East coast -- are below the five-year average, at close to 65 million barrels, according to the latest EIA data.

In the meantime, fuel producers including Marathon Petroleum Corp. are weighing alternatives for how to ship their products to the Northeast.

One potential route is the Kinder Morgan-operated Plantation Pipeline, even though it only extends as far north Washington D.C. and has a capacity of 720,000 barrels a day, far short of Colonial’s. Kinder said Sunday it’s working with customers to accommodate additional barrels during Colonial’s outage, and that Plantation is deferring where possible any non-essential maintenance that might otherwise reduce flow rates.

While all of the major segments of Colonial’s system remain offline, some smaller so-called laterals connecting specific fuel terminals to delivery points are in service, the company said. That laterals gave some traders hope that the full network may be back online within a week.

“Hopefully it is a sign that they have made progress either negotiating with those responsible for the attack or have found ways to operate around it, said Debnil Chowdhury, head of Americas refining at IHS Markit. “However to avoid product shortages, all efforts should be made to avoid a 5+ day outage of the main lines.”

Inventories offer minimal cover, ClearView Energy Partners said in a research note. Tankers leaving Rotterdam could take up to 14 days to make the trip to the New York Harbor. The Midwest could theoretically send some of its supplies to the East Coast via rail and barge, but the region’s inventories are tighter than in previous years, ClearView said.

“The Colonial outage comes at a critical juncture for the recovering U.S. economy: the start of the summer driving season,” ClearView said. “We therefore think lawmakers could begin a ‘blame game’ immediately, and a sustained disruption that leads to a significant pump price spike could increase prospects of domestic policy interventions.”