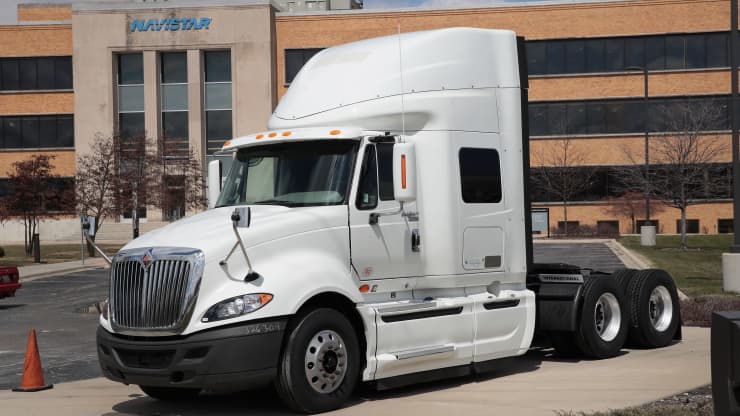 An International truck is parked in front of a Navistar facility on April 17, 2018 in Melrose Park, Illinois.
Scott Olson | Getty Images

DETROIT — General Motors will supply Navistar International with fuel-cell electric vehicle technology for a new semitruck, adding to the automaker’s growing tie-ups in the emerging market.

The companies are billing the collaboration as part of a “complete solution” for customers of Illinois-based truck manufacturer Navistar. The deal, announced Wednesday, includes privately held hydrogen-fuel company OneH2, which will be responsible for hydrogen production, storage, delivery and safety to fuel the truck. Navistar said it will take a minority stake in OneH2 under the agreement. The details of the partnership were not disclosed.

“All parties will play a strong role in developing the consistent solution,” Navistar CEO Persio Lisboa said during a media call. “I think that this is the beginning of something, and we believe that many other customers will be able to join as we move along with the technology and the solution.”

J.B. Hunt Transport is expected to be the first customer to pilot the semitrucks and hydrogen fueling system at the end of 2022, according to the companies. The first trucks are expected to be available for sale in 2024, Lisboa said.

GM will provide Navistar with “fuel-cell power cubes,” which the automaker says will each contain more than 300 hydrogen fuel cells along with thermal- and power-management systems.

The Navistar tie-up is the latest for GM regarding its “Hydrotec” fuel-cell technology. The company has previously partnered with the Army, Honda Motor and France-based Liebherr-Aerospace, among others.

Most recently, GM announced a scaled-back memorandum of understanding to supply fuel-cell technology to embattled electric truck manufacturer Nikola. A GM spokeswoman said the new partnership does not impact its nonbinding deal with Nikola, which remains subject to negotiations and expires at the end of this year if it’s not finalized.

“This is a unique deal,” said Charlie Freese, executive director of GM’s global fuel-cell business. “We have nothing additional to talk about on prior agreements other than what’s already been publicly announced.”

In the summer, GM initially announced a $2 billion deal with Nikola. The start-up would give the automaker an 11% stake in the start-up to supply battery and fuel-cell technologies as well as produce a now-terminated Badger pickup.

The deal was initially viewed as a no-lose situation for GM, but the talks became convoluted after short-seller Hindenburg Research lobbed fraud allegations against Nikola and its founder, Trevor Milton, who resigned as the company’s executive chairman in September.

Hydrogen fuel-cell electric vehicles are viewed as a long-range solution for the trucking industry, which is attempting to move away from diesel-powered vehicles. They operate much like battery-electric vehicles but are powered by electricity generated from hydrogen and oxygen instead of pure batteries.

FCEVs also are quicker to fuel than battery-electric vehicles, which the automotive and trucking industries also are exploring for shorter trips.

Navistar said it’s targeting the fuel-cell-powered semitruck, which it’s calling the International RHTM Series FCEV, to offer more than 500 miles of range and a hydrogen fueling time of less than 15 minutes.

“GM is a trusted partner on the industrial side. And after extensive research, Navistar selected GM to collaborate on fuel-cell technology due to the company’s global leadership in this space,” said Lisboa, citing the automaker’s decades of research and development of hydrogen fuel cells.