An entire generation of Ford Bronco was lost to the gas crisis. Here's what it could have looked like 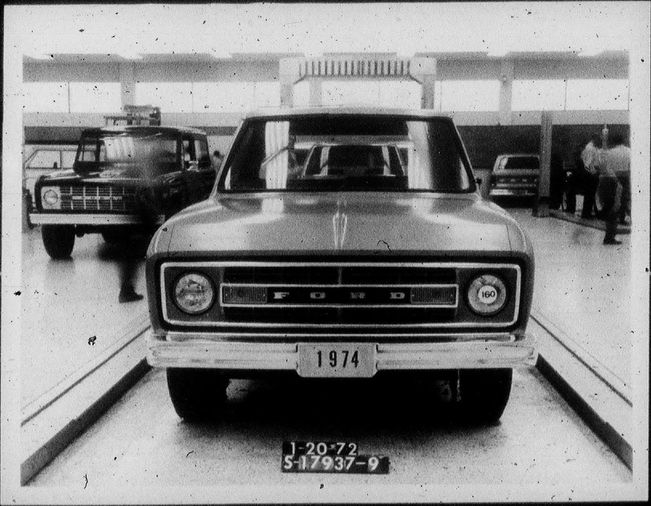 Anybody who's the least bit familiar with product cycles and the SUV boom of the Sixties and Seventies has to have noticed one very odd thing about the first-generation Ford Bronco: It remained in the marketplace, more or less unchanged, for 12 years--pretty much an eternity in an era of near-constant refreshes and redesigns--while competitors kept launching new products that in some cases redefined the marketplace. As it turns out, Ford's designers weren't just sitting on their thumbs; they had plenty of ideas on how to keep the Bronco competitive, many of which we're just now seeing.

Buried among the avalanche of images of the new Ford Bronco models the other day--and even among the historic images that Ford Media decided to include--were dozens of grainy photos of clay models and renderings from 1971 through 1973 or so, showing almost just as many proposals for a replacement for the first-generation Bronco. It appears that the Ford designers behind the proposals had one brief: Make the new Bronco less of a rough-and-tumble bare-bones off-roader and more refined, more suburban. In the background lurk a number of competitors' models, but it's obvious from many of the photos that Ford's designers were benchmarking pretty much everything on the market at the time.

Other than the date boards that were ubiquitous in Ford styling images over the decades and the license plates suggesting that Ford intended to launch its second-generation Bronco in 1974, Ford provided very little context here - no designers' names, no notes, no internal codenames - so we're going to have to parse what we can from them with what we know of the era. 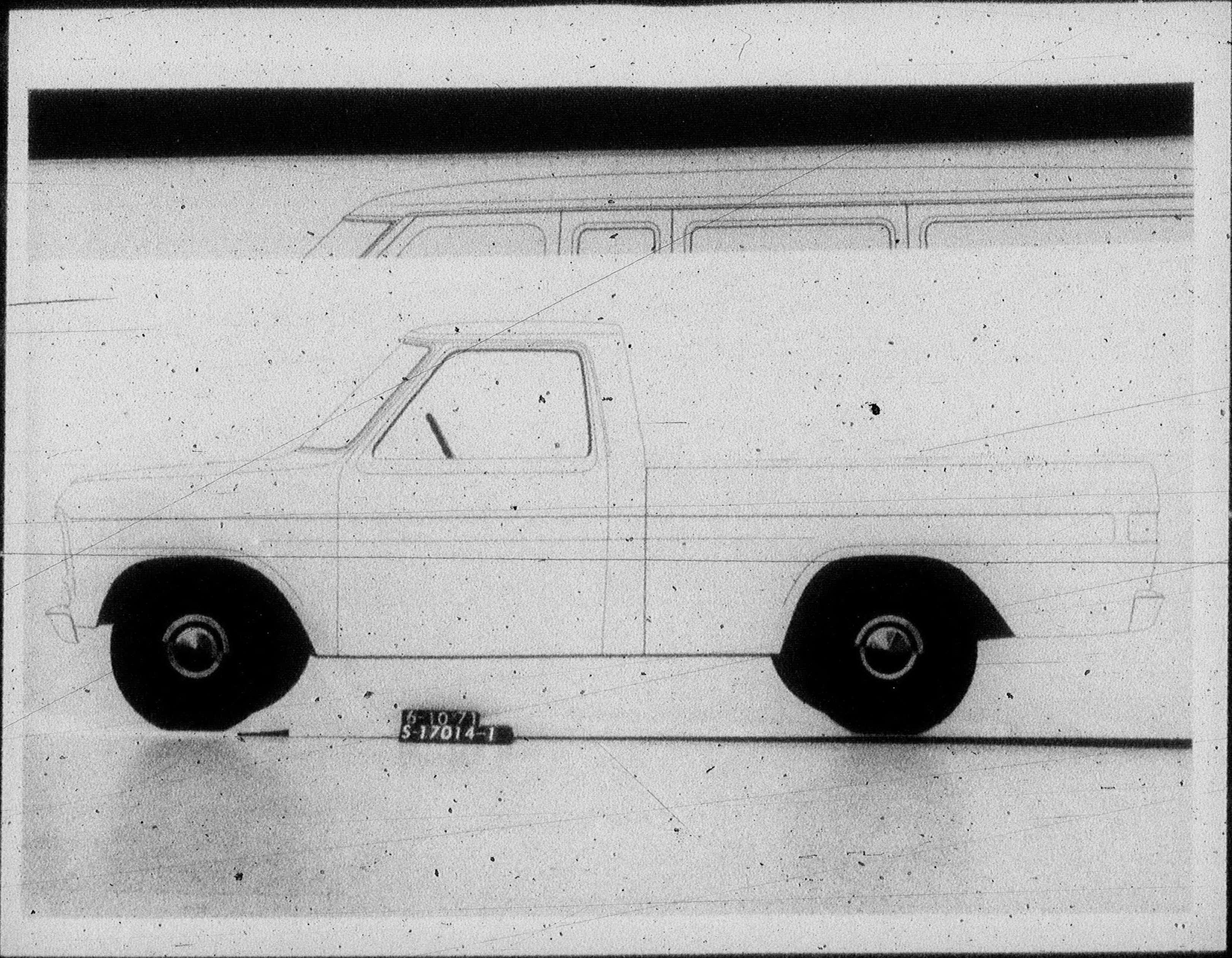 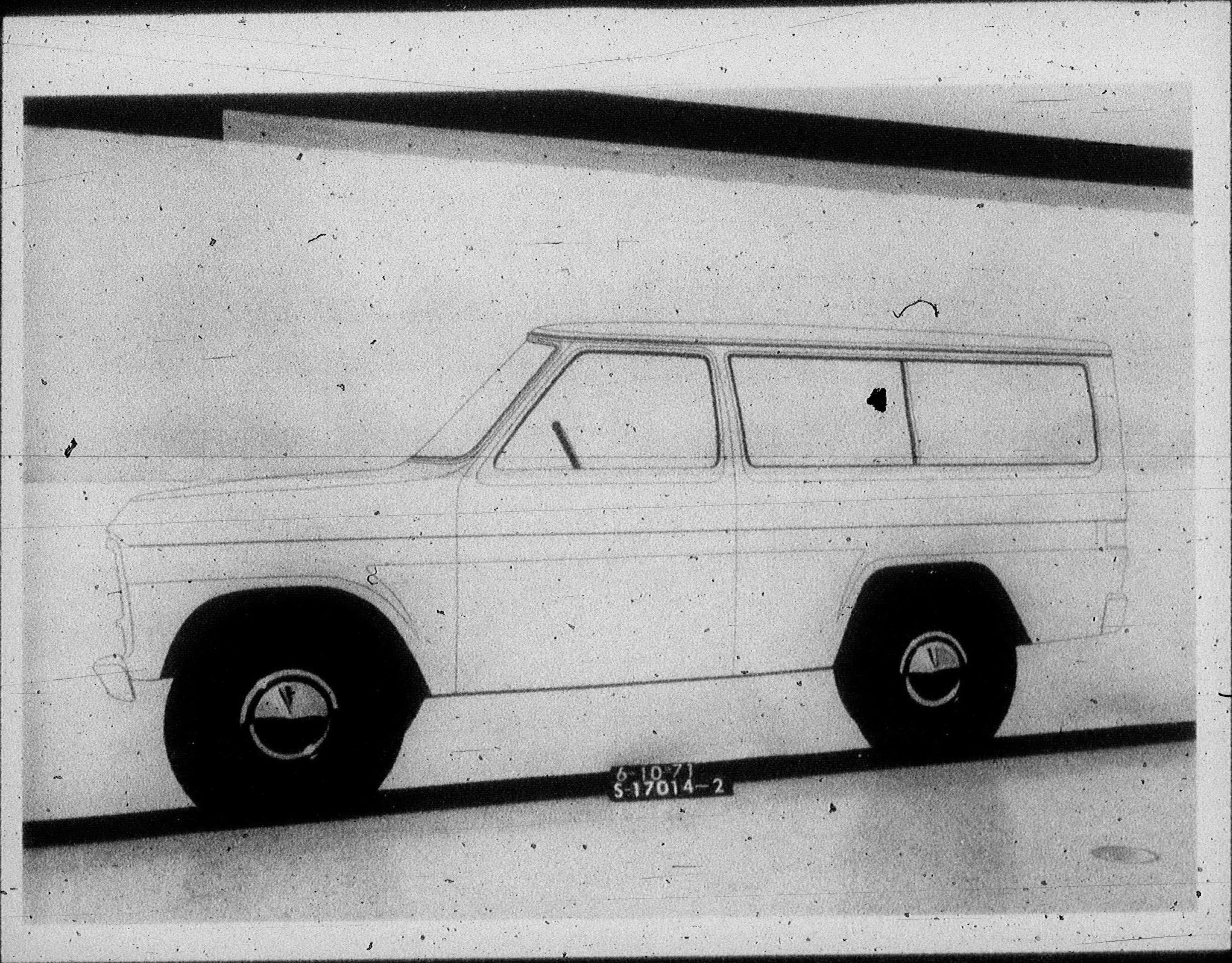 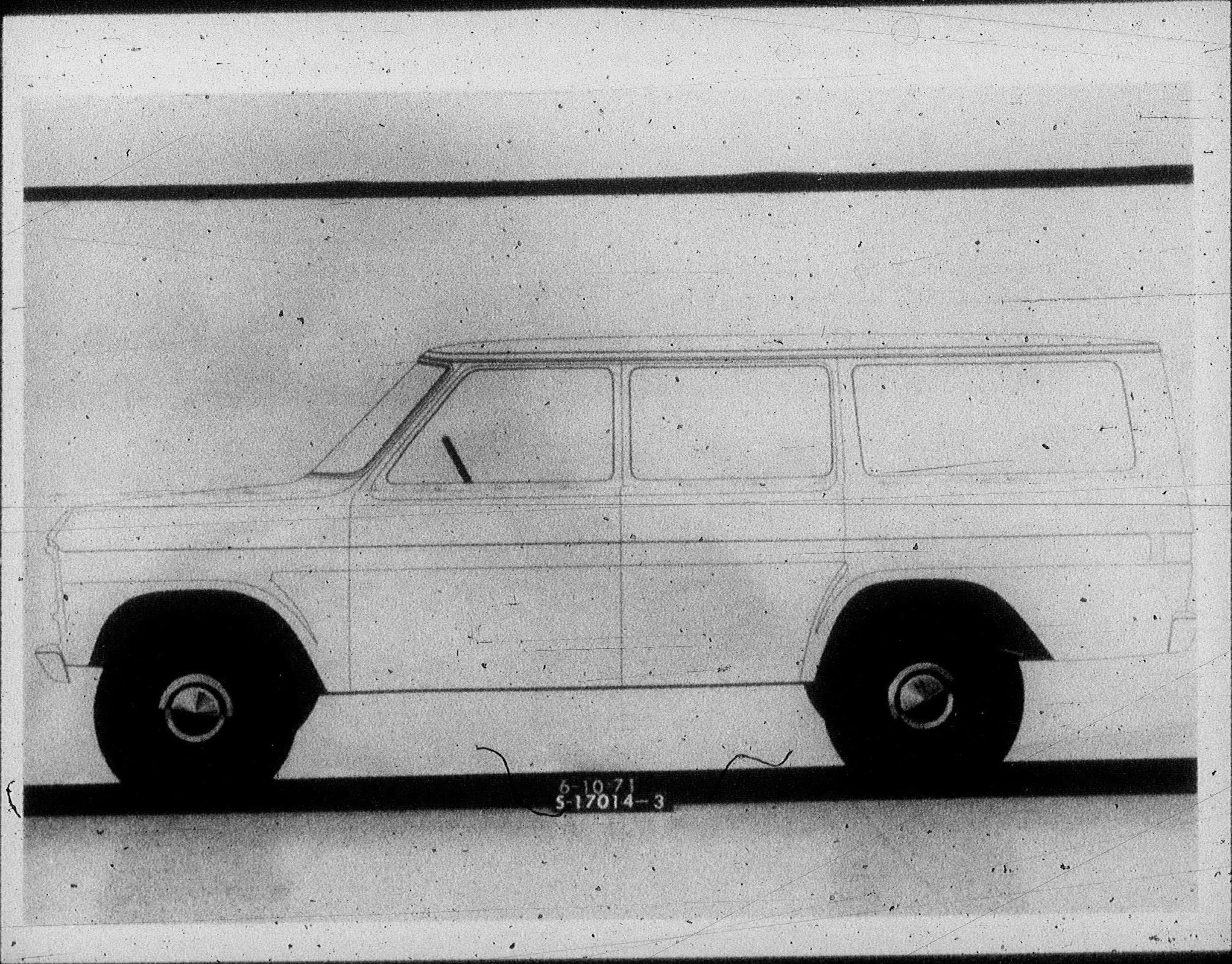 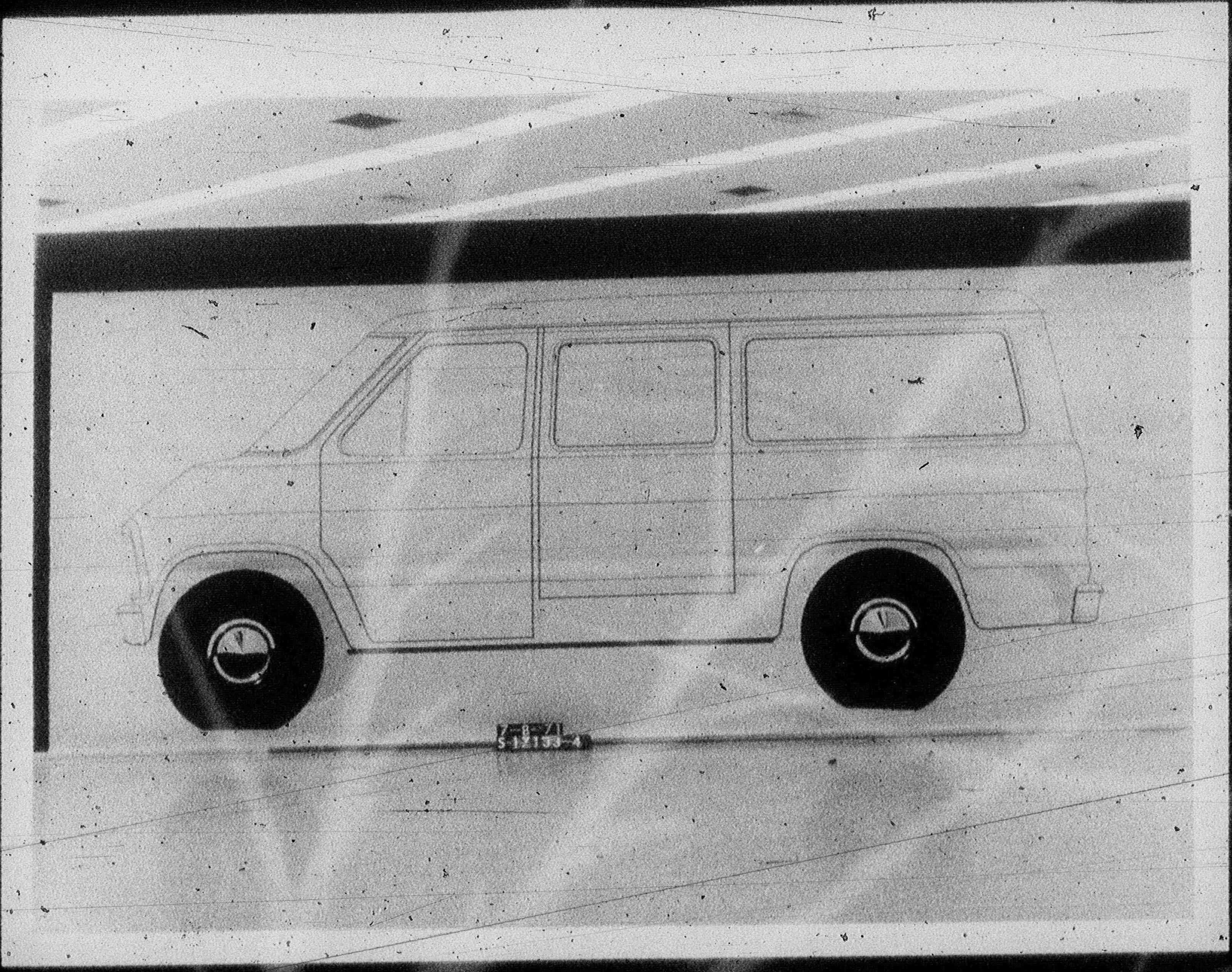 Aside from designs that predate the launch of the Bronco in late 1965--including the widely known McKinley Thompson Bronco designs--the earliest images show a trio of rather prescient sketches dated June 1971. When launched, the Bronco was touted as an extensible vehicle, able to be configured as a roadster, wagon, or pickup. That concept of multiple body styles gradually went away through the Bronco's first generation and has only returned with the latest generation's two- and four-door variants, but the designer behind these sketches proposed expanding that focus on multiple body styles with a compact unibody pickup, a two-door wagon and a four-door wagon. In profile view, that flat roofline and the squared-off rear (not to mention the blocky taillamps) look an awful lot like contemporary Toyota Land Cruisers, another off-roader that offered pickup, two-door, and four-door variants. The Land Cruiser did not, however, come as a minivan, but a Bronco minivan appears to have arisen as a possibility a few weeks later; while this sounds far-fetched, keep in mind that designer Dick Nesbitt was responsible for some later Bronco designs and the Ford Carousel that cropped up a year or so after these images. 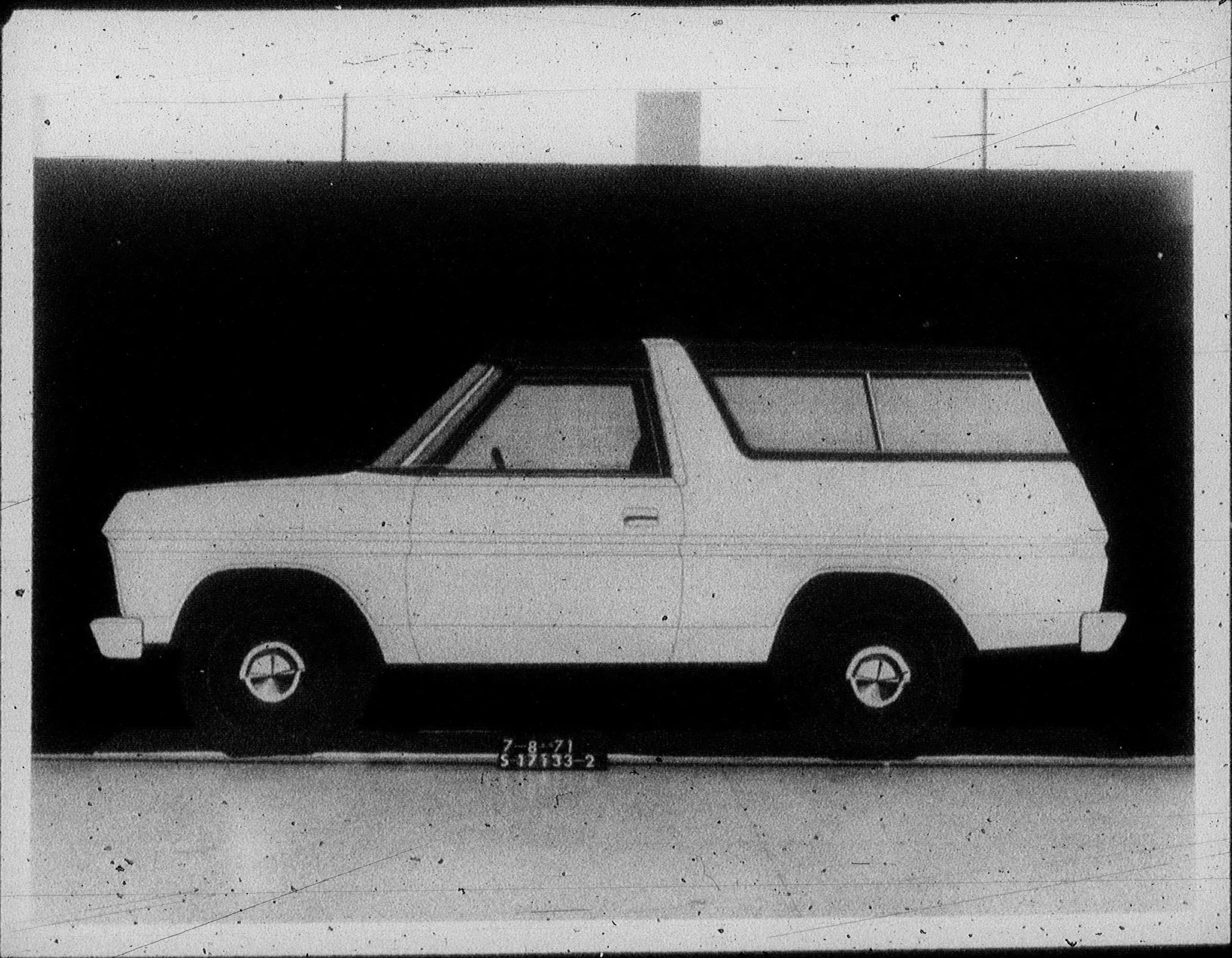 The idea of a Bronco minivan sounds far-fetched today, though, because in these early July 1971 images we see an abrupt return to the two-door sport-utility paradigm. The first of these three shows what looks to be a fully removable hardtop, something like the Chevrolet Blazer's. Note the paper with the top drawing folds up and out of the way--likely to show the Bronco with the hardtop off. The second and third images show an alternate proposal with what could be an integrated rollbar, removable rear section, and removable targa top. The fourth in this series, dated early August, shows that the targa version remained under consideration for a few weeks at least; not sure why there's an International Scout poster in the background of this particular image. 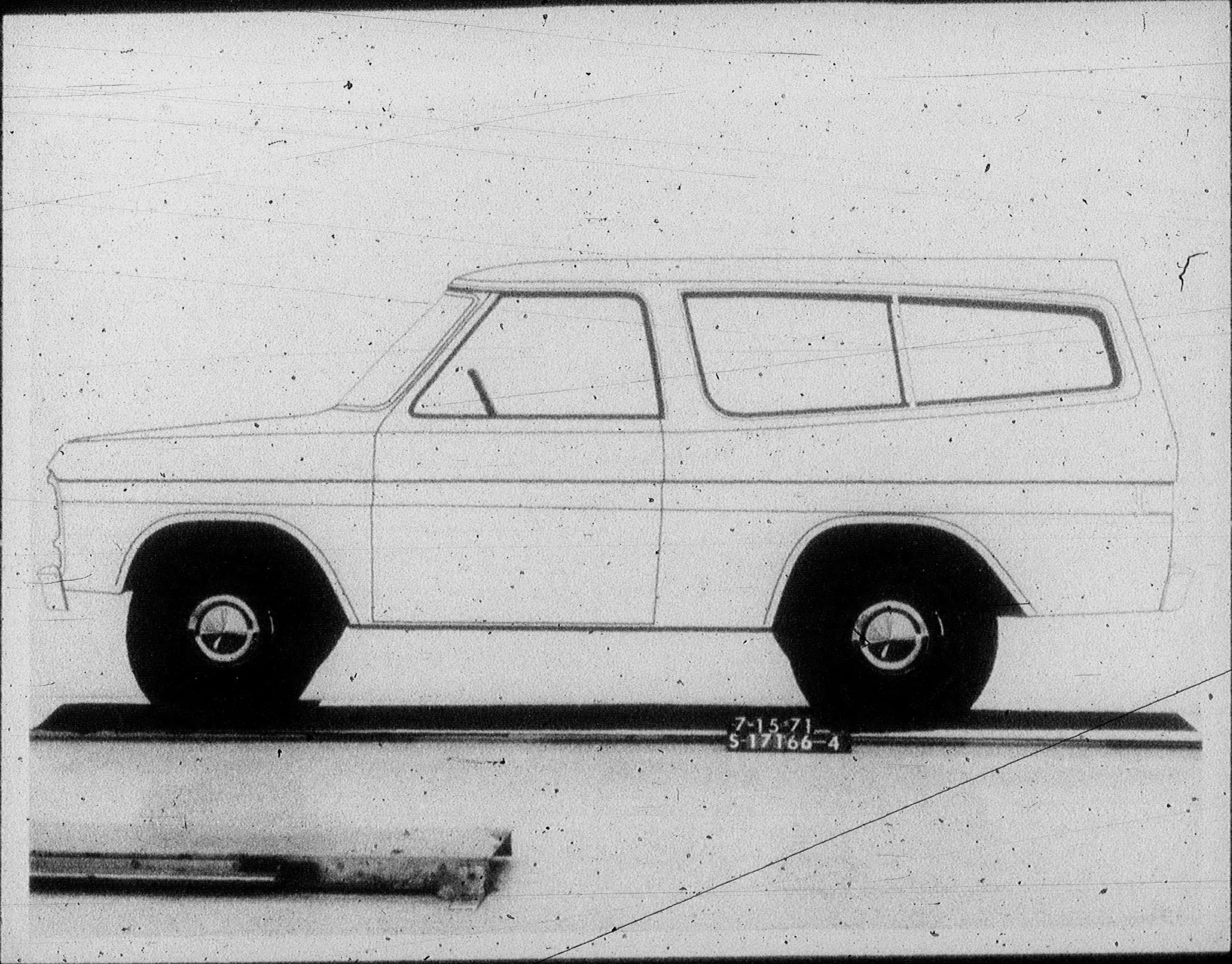 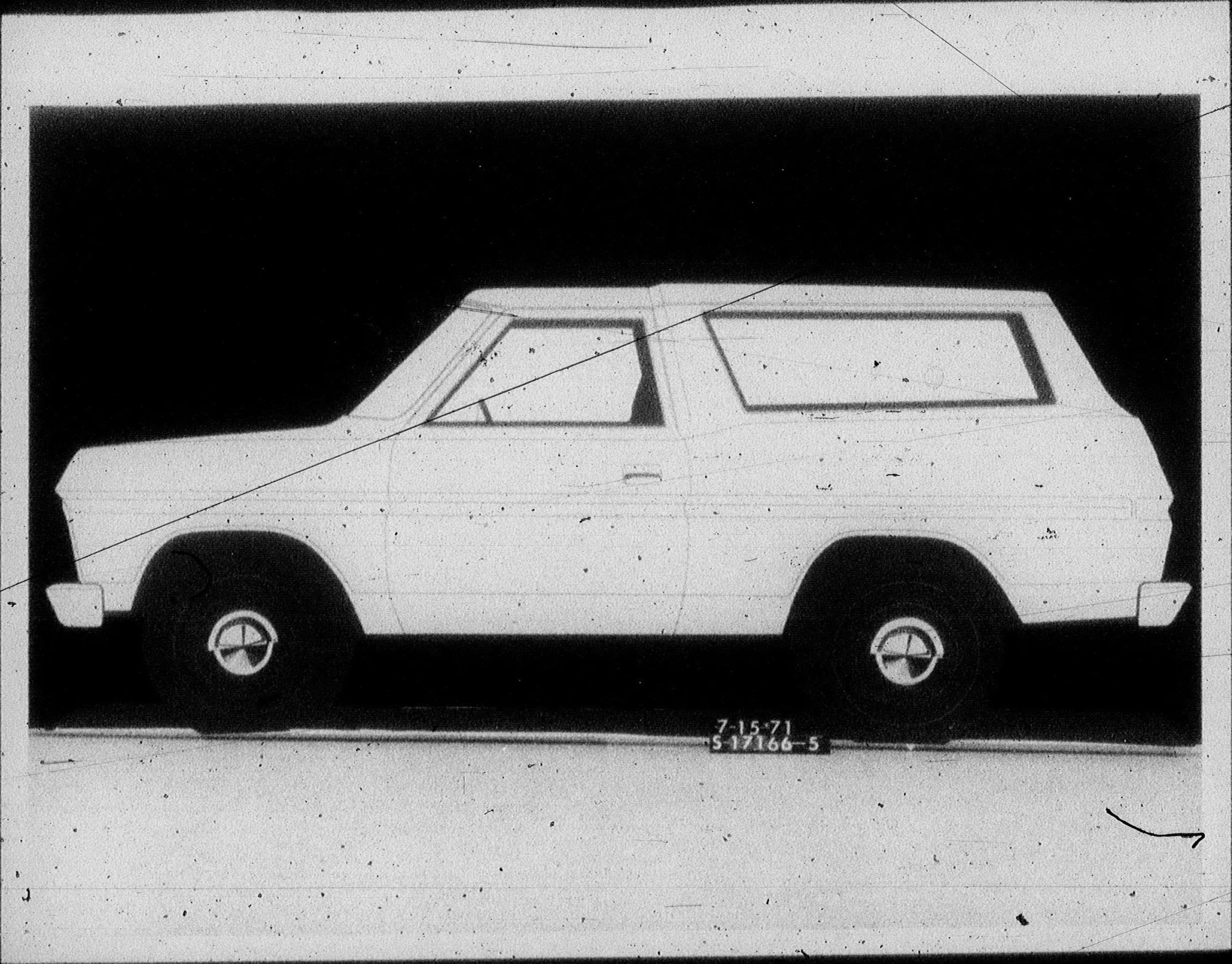 These two drawings, dated mid-July 1971, keep the same basic body below the windows, but envision the Bronco with a fixed top. We're not sure where they were going with the window treatment for the first, but the upper rear of the second one looks like it was cribbed from Brooks Stevens's full-size Jeep. 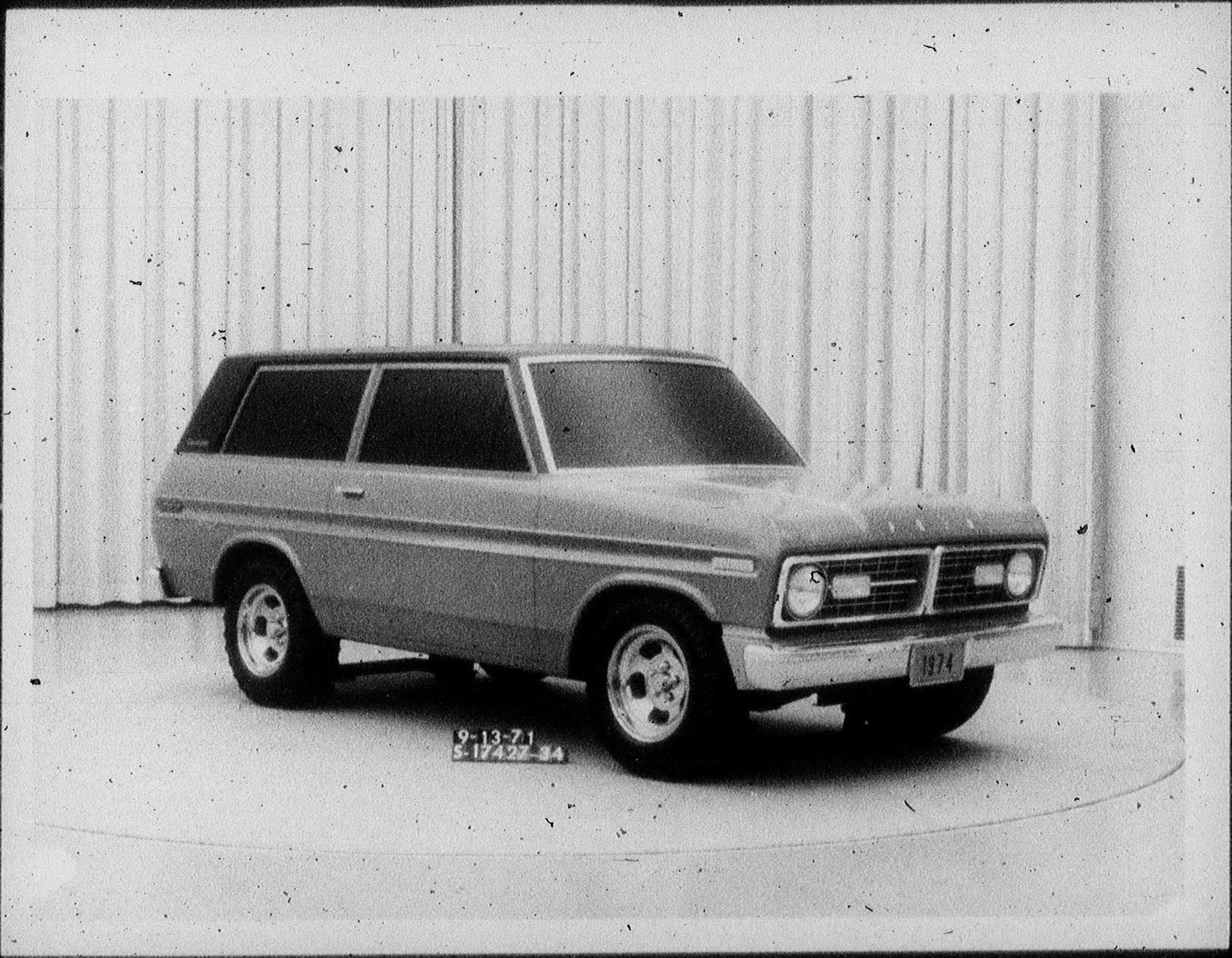 By mid-September 1971, Ford's design staff seemed to have discarded a lot of the crazy ideas about multiple body styles and removable roofs and instead coalesced their designs for a second-generation Bronco around this full-scale clay study with a non-removable (but vinyl-covered?) roof. One side shows it with the indent from the full-size pickup, while the other shows a non-indent design. Yes, that grille looks very Courier-ish. Could Ford have intended the second-generation Bronco to align with its captive import mini truck to do battle against the imported SUVs? Given the similarity to the Land Cruiser we noted above, that's a distinct possibility. The daylight images dated a couple weeks later show different taillamps but largely the same design. 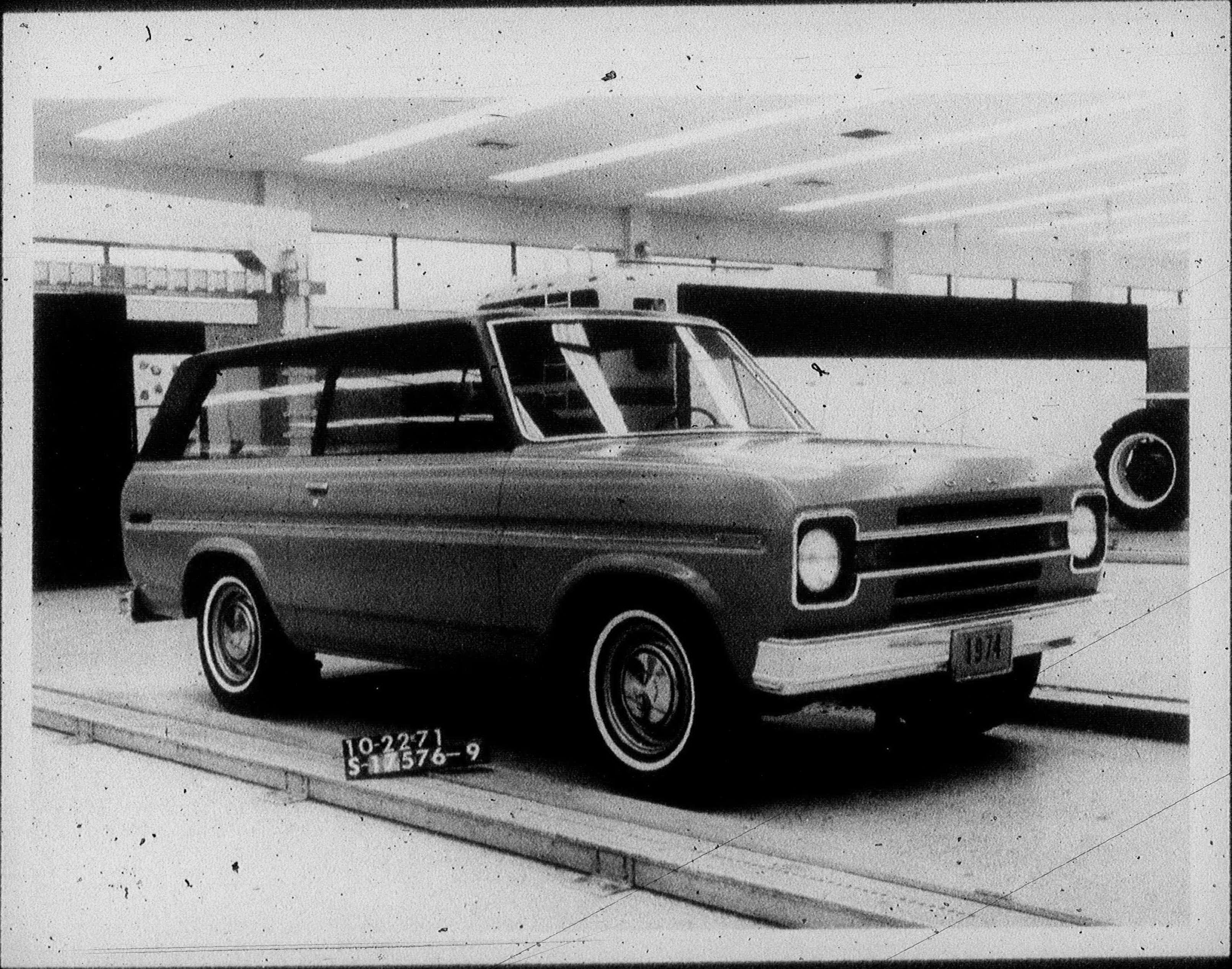 A month later, and we have a similarly proportioned vehicle but with significant changes in detail. Gone is the Courier face, replaced with something more like the first-generation European Escort. The pickup indent remains on the passenger side, but the driver's side shows some bulkier flares and a dip from the A-pillar to the C-pillar. Ford pickup taillamps, too. Given the Blazer's success while using full-size GM pickup sheetmetal (and the Blazer used for benchmarking in the background), it's not surprising Ford designers kept integrating more of its full-size pickup stampings into the Bronco's design. In the last photo in this grouping, it sure looks like Ford was benchmarking the Range Rover too. Note the 1974 license plate; Ford's designers were probably cutting it close on the product planners' timelines. 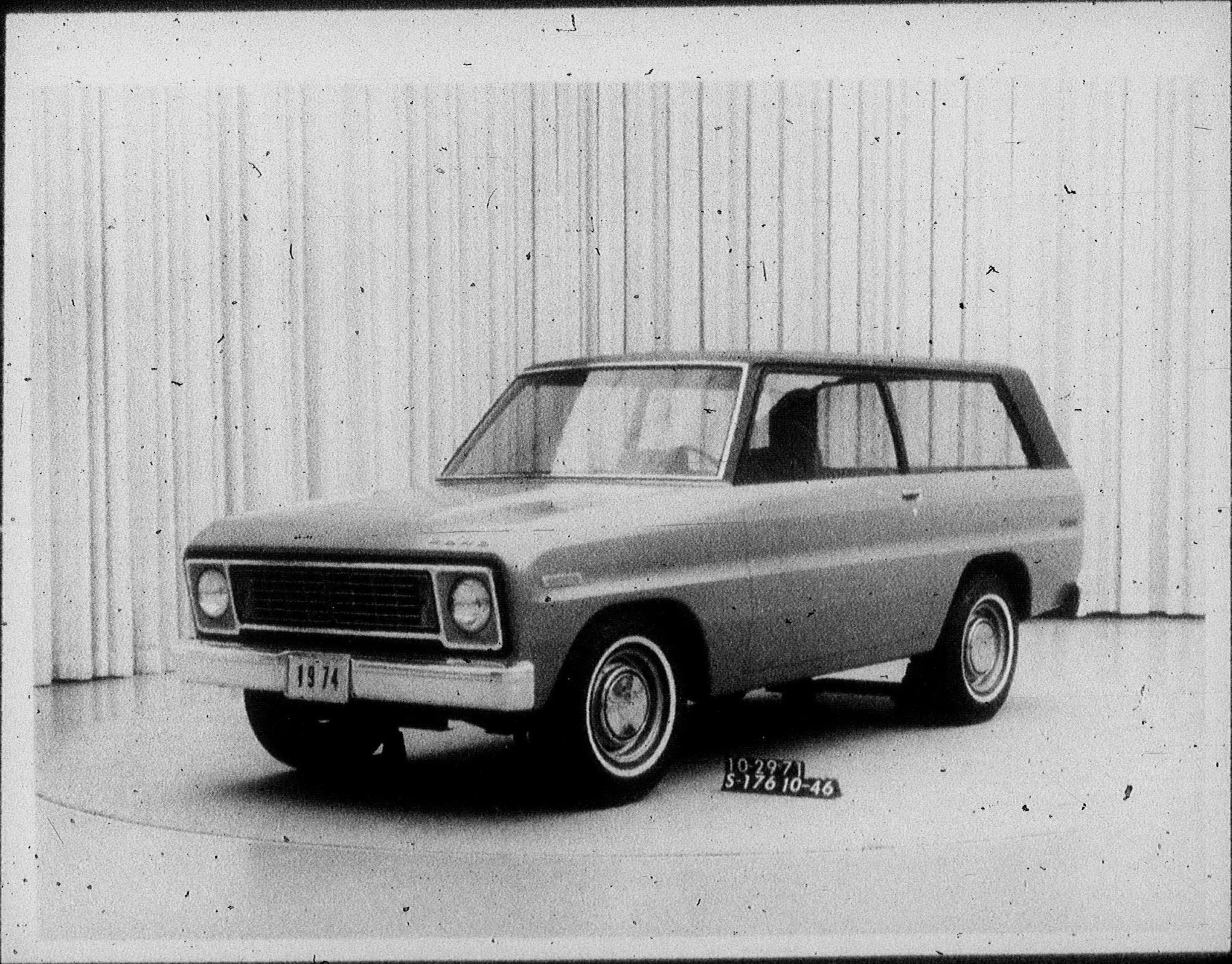 A week later and it looks like two or three different clays are up for consideration. One still has the pickup's taillamps and indent, another has smoother sides and rounder taillamps, and the third (without the vinyl roof) appears to have the taillamps from the late-September version. This time, we have a grille reminiscent of the Econoline. Were the designers hunting for some other vehicle in the Ford lineup to glom onto, or were they just instructed to reuse existing design languages? 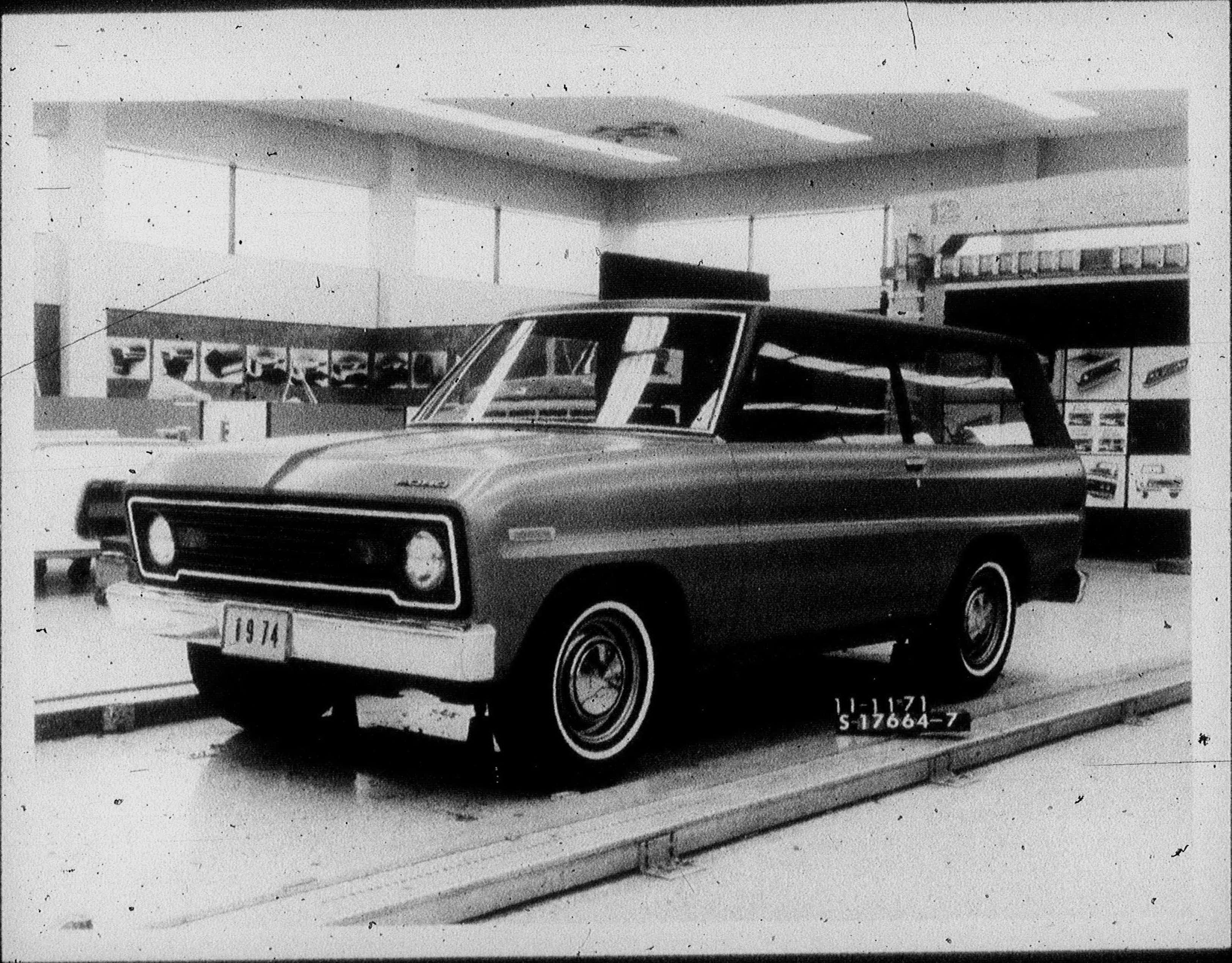 Mid-November and another grille change; this one looks equal parts Econoline and Jeep Commando. 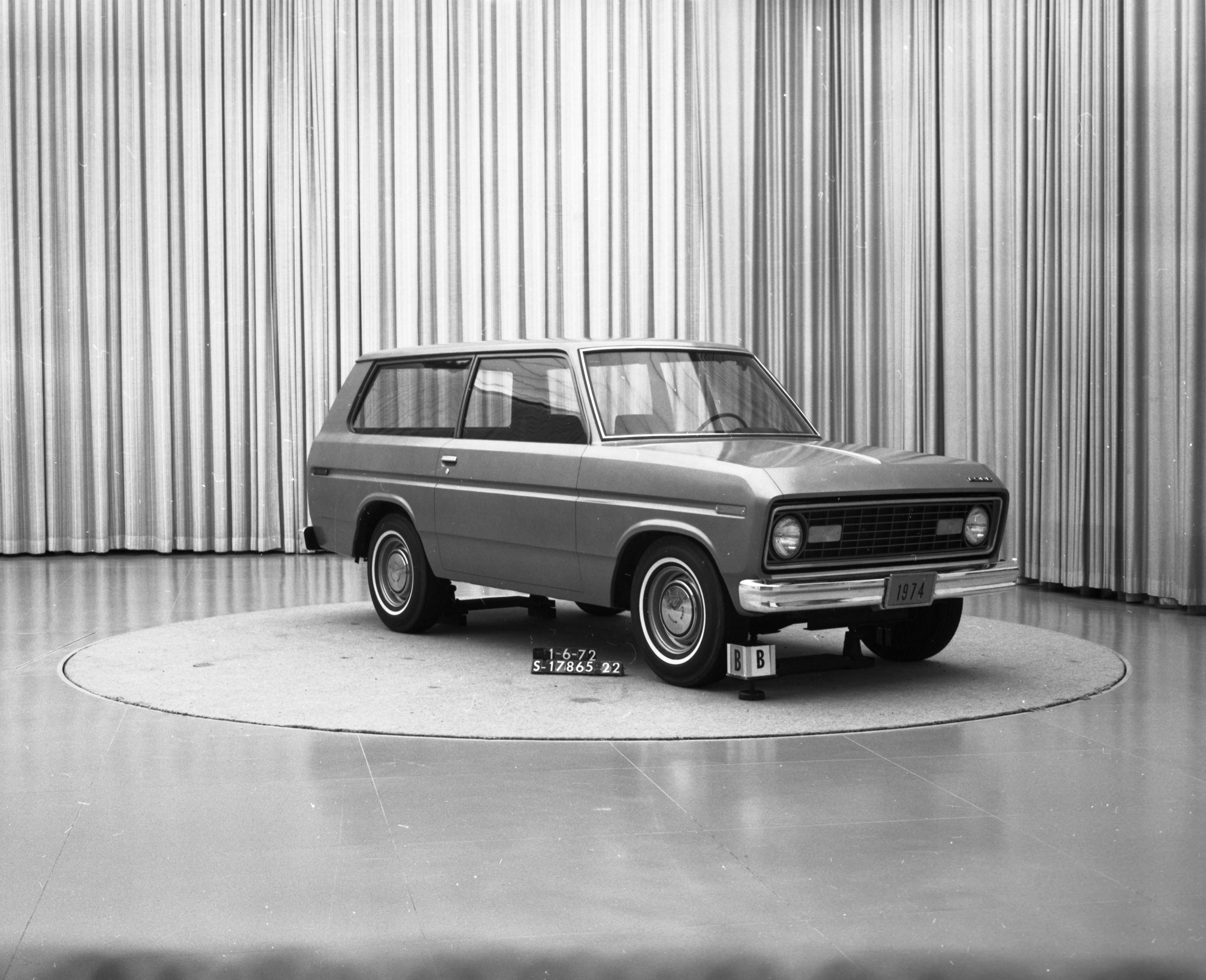 January 1972 and showing more Commando-esque styling now. It also looks like the design staff settled on the pickup indents. The roofline, which seemed immutable over the prior few months, now shows a little more curvature, something like a blend of Range Rover and Ramcharger/Trailduster.
Also, could Ford have considered jettisoning the Bronco name for the second generation? A placard beside this version reads "Centaur Wagon." Ford had used the Centuar name once before--for a concept car in 1954--but this seems a strange and possibly short-lived decision. 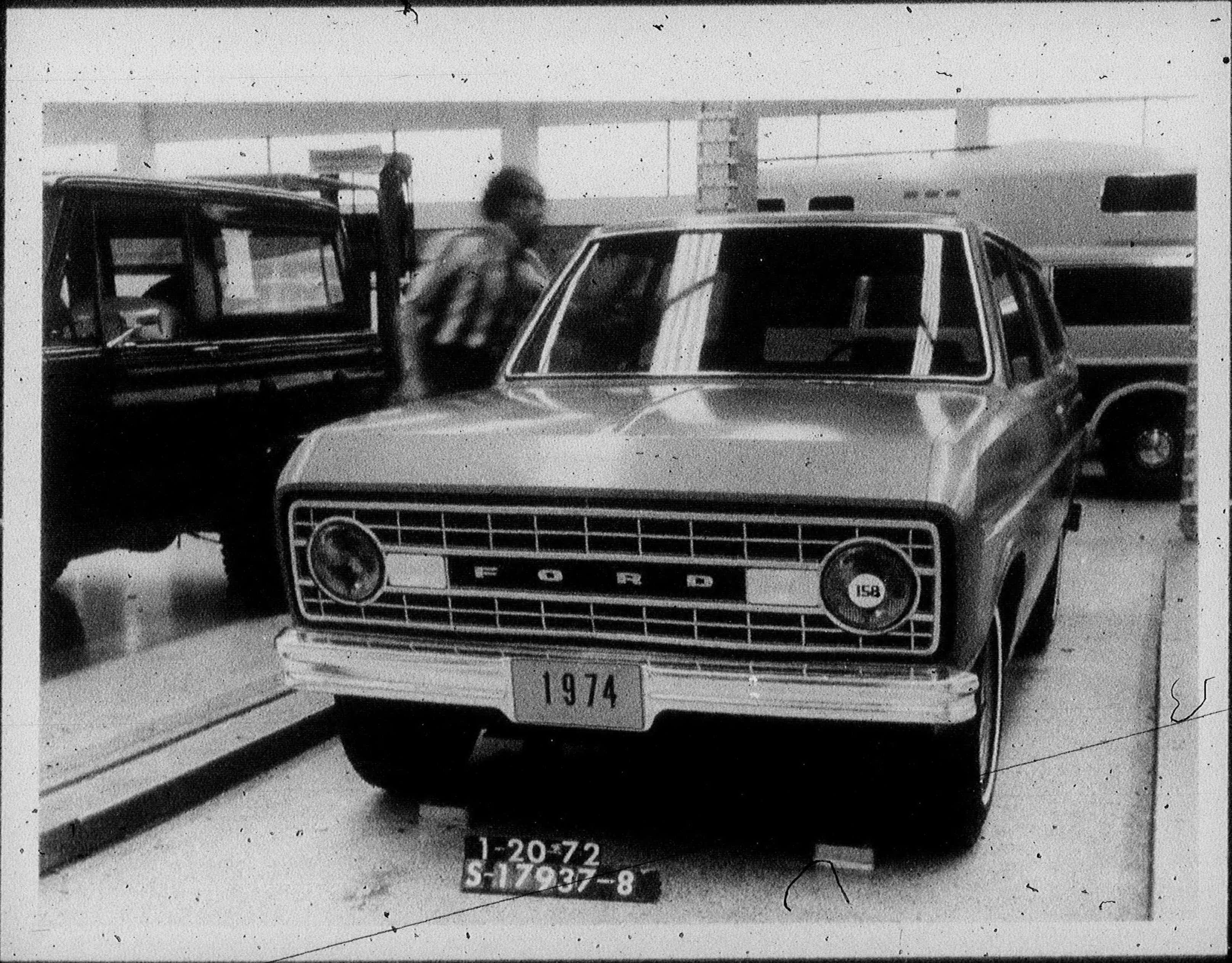 But then for the rest of that January, it seemed the Commando grille fell out of favor and somebody decided, well, why not just slap the existing first-gen Bronco grille on it. Note what appears to be the first-gen Bronco in the third image in this grouping (and in the lead image for this article); did the design staff really need to bring in a product Ford was already selling at the time for reference? 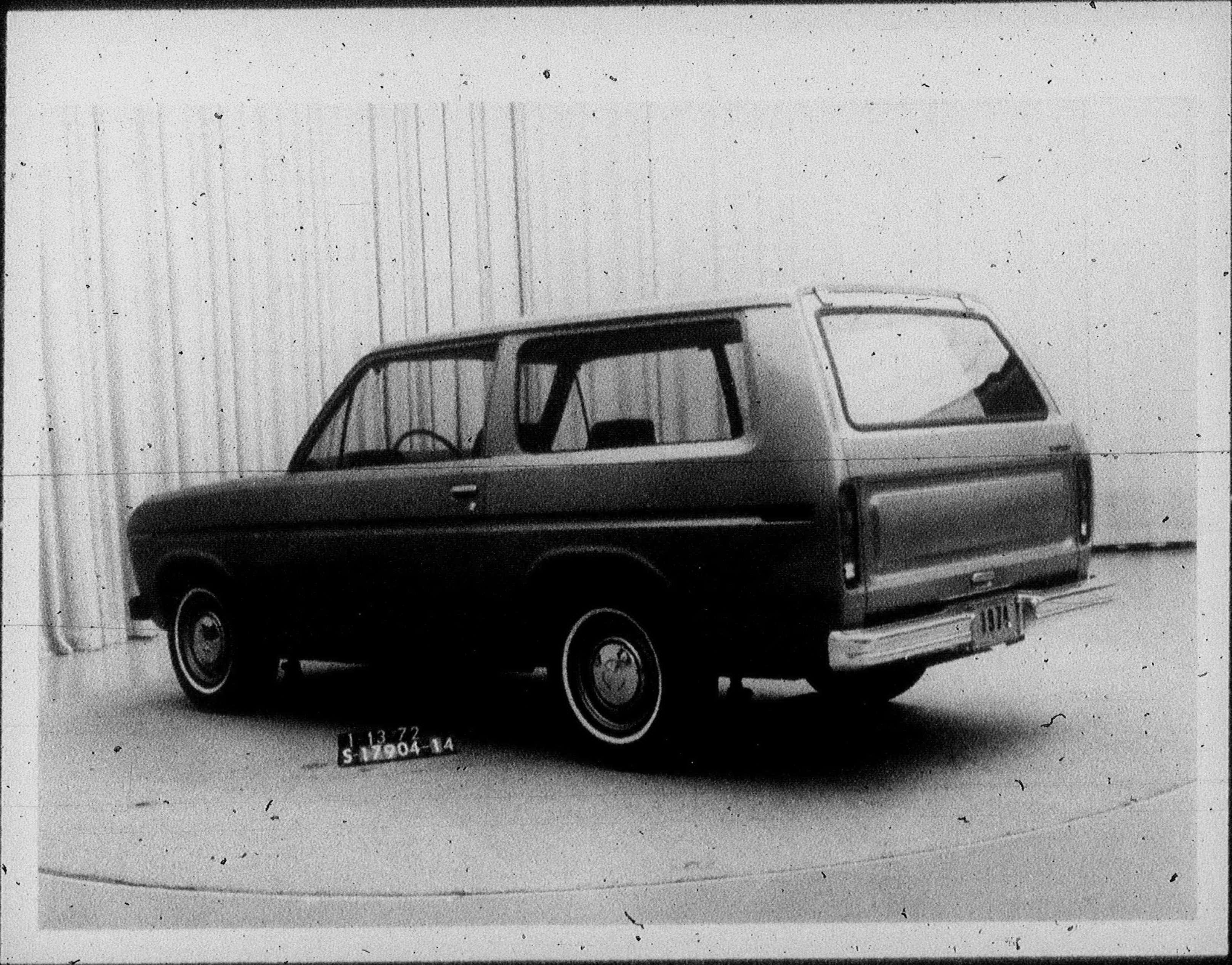 At about the same time, the design staff was taking a closer look at the rear end too. Looks like they had a full liftgate in the works, along with some rear side windows that look vaguely minivan-ish. Also, dig that slide-in camper that looks like an overinflated marshmallow. 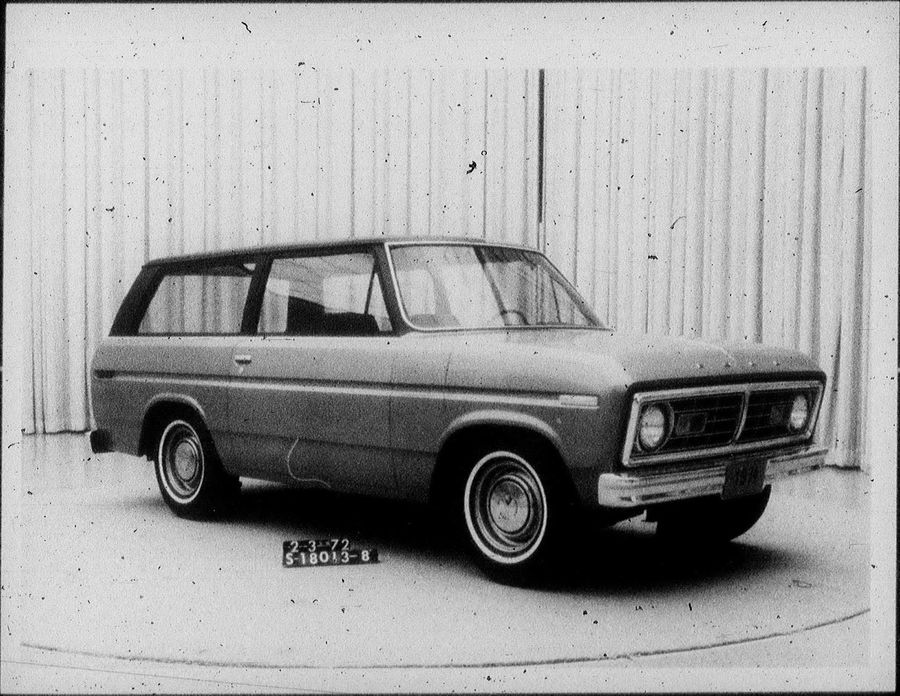 By February, the grille issue seemed resolved: They went back to the Courier grille. Still planning on a 1974 launch date apparently. 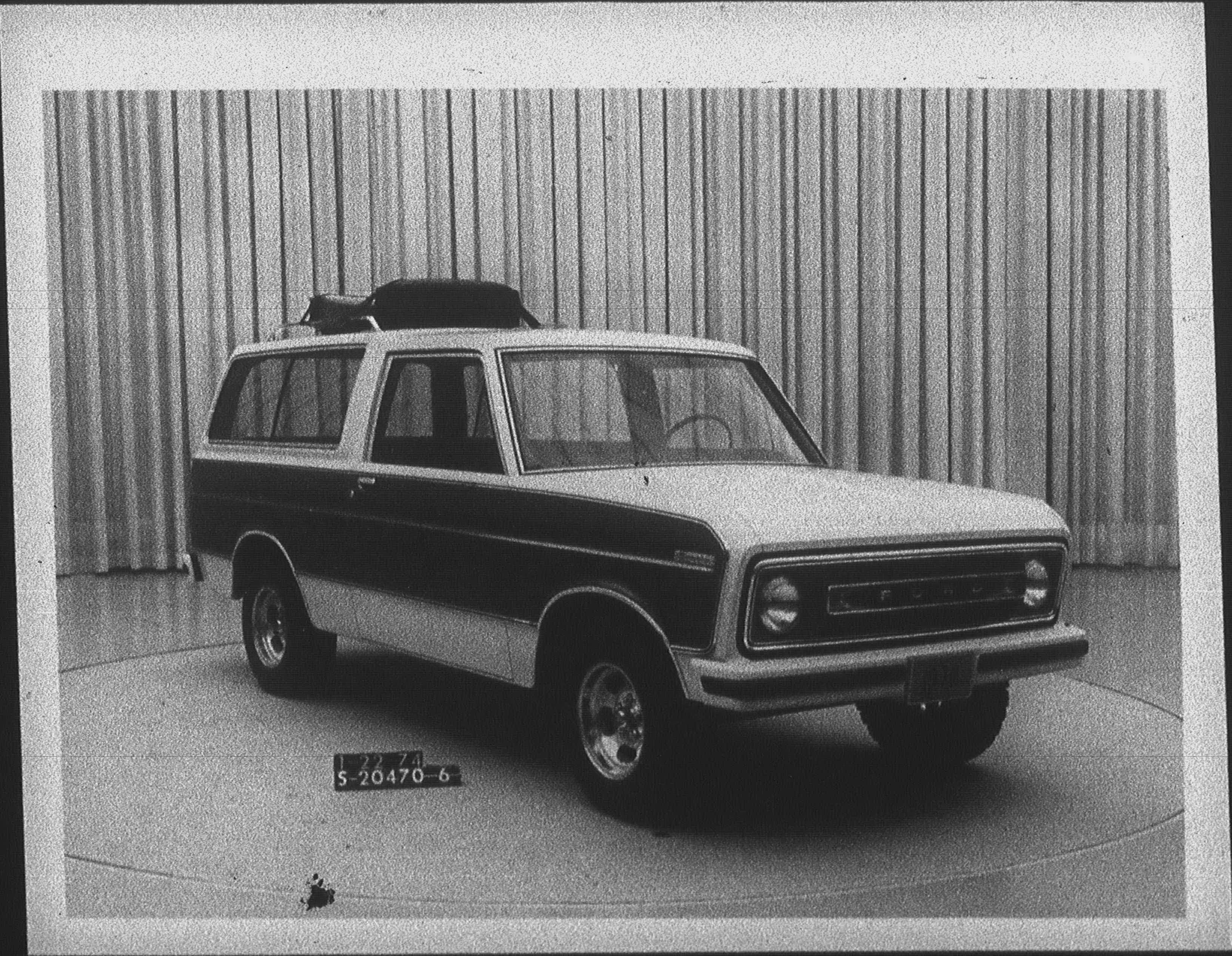 After February, the record gets spotty and inconsistent. In April 1972, we see a version with squared-off (yet curved) side glass and the taillamps from the September 1971 version. Then by February of 1973, we see a change in direction toward Nesbitt's Shorthorn designs that just go ahead and make use of full-size pickup stampings from nose to tail (and another glimpse of the Carousel in the background of the May 1973 image above).
Finally, in January 1974, one more design. This is already past the launch date for 1974 model year vehicles, but the overall design looks rather complete. Also Courier-based, but this time sans the Courier grille. Possibly a concept built for the car show circuit?
Anyway, as Nesbitt has told the story, his Shorthorn designs--originally sketched in 1972--eventually became the basis for the 1978-1979 Bronco (which was originally supposed to have carried the Bronco II name) after the 1973 oil crisis sidelined most product development, including that of the second-generation Bronco and of the Carousel. Thus, the original Bronco soldiered on past its sell-by date for another few years.
SOURCE: HEMMINGS
← Go Back To List