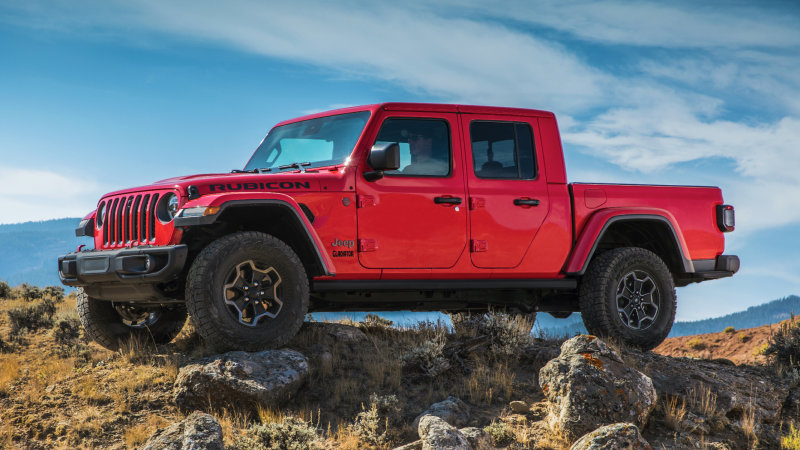 The only engine it doesn't get is the turbo four-cylinder

Citing significant customer demand, Jeep has announced that it will now offer the EcoDiesel V6 in the 2021 Jeep Gladiator pickup truck. It will be available on the base Sport, Overland and off-road-oriented Rubicon trim levels. It will show up in showrooms by the end of the year, and dealers are taking orders now.

The engine has the same specifications as what you'll find in the Jeep Wrangler and the Ram 1500. It makes 260 horsepower and 442 pound-feet of torque. It's also paired with the same eight-speed automatic transmission. Unlike the gas-powered V6, the automatic is the only transmission option.

The rear axle ratio on all models is 3.73:1 including the Rubicon. That's the same as gas Gladiator models, but the gas Rubicon gets a 4.10:1 rear axle. Transfer cases on the diesel models get the same low-range gear ratios as their gas-powered counterparts with a 2.72:1 on the Sport and Overland and a 4.0:1 on the Rubicon.

Two key details haven't been announced for the Gladiator diesel yet: pricing and fuel economy. We expect pricing will be similar to the Wrangler, where the engine is a $4,000 option, and the transmission that goes with it is $2,000. That would mean a base Gladiator Sport with only the EcoDiesel as an option would be priced around $41,000.