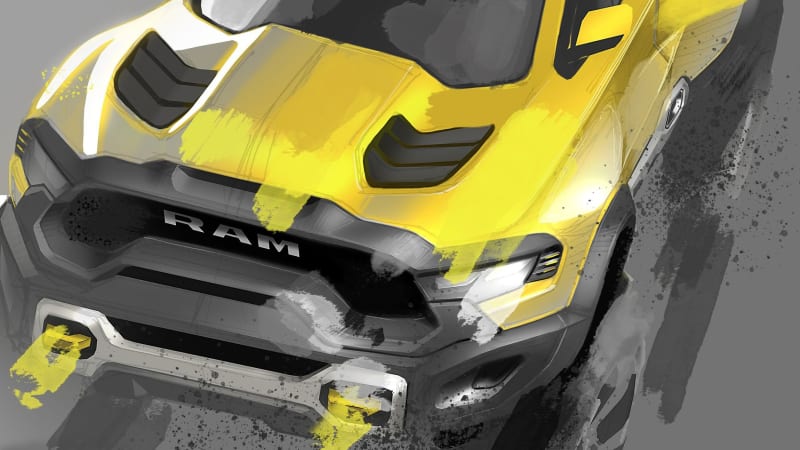 Body mods outside, luxurious interior inside

We got our last big scoop on the coming Ram Rebel TRX last summer, when Jordan Denhoed caught a pack of prototypes testing in Michigan's Silver Lake Sand Dunes. We'd heard then that as opposed to the TRX concept, the production truck would unlock the full 707 horsepower from its 6.2-liter Hellcat V8, and use a traditional shift lever to work the gears of a 10-speed automatic. Now Mopar Insiders and Allpar have another batch of details that both sides said were gleaned from insiders with knowledge of the product. The looks, which will hew closely to the concept, have apparently already been teased. The Dodge and Ram corners of FCA like to foreshadow future offerings in their press photos and flyers, Ram doing so again on a graphic that advertised the FCA 2020 Drive for Design contest, pictured. We're told to expect the same twin-vented hood and flared arches front and back, as well as a new take on the current Ram Rebel grille that frames headlights from the Laramie Black trim. The side-exit exhaust would be cool, but we doubt it makes production.

That extra width necessitates amber marker lights. The Ford F-150 Raptor, which uses the same lights for the same reason, places its markers along the top edge of the grille just below the grille surround. Mopar Insiders says the Rebel TRX's amber markers will lurk inside the large hood scoop. The Hellcat will get plenty of air from additional vents astride the headlights, and vent its heat through extractor vents just ahead of the windshield and ahead of the front doors. In lieu of any Hellcat badging save for on the supercharger, script on the hood in the same font as the Rebel TRX concept will read, "6.2L Supercharged." In back, yet more vents mimic those in the front fascia, this time placed next to the taillights. There will be an LED CHMSL, and larger diameter exhaust tips poking out of the bumper.

Inside, Allpar says Ram plans to follow the Dodge SRT template by loading up the interior; the question is whether there will be a base model, or if it's only SRT plus options. The luxury angle means the 12-inch Uconnect infotainment system will be standard, with off-road-specific screens among the Performance Pages. Allpar confirms the conventional shifter, and Mopar Insiders says the lever will be joined by aluminum shift paddles borrowed from the Alfa Romeo Stelvio Quadrifoglio. The paddles will be longer than those in the Italian crossover, and mounted on the steering wheel. The shifter placement means that Ram's sliding console won't be an option in the Rebel TRX. Where the standard Ram's rotary shifter is, expect to see a terrain mode dial. The luxury focus would also mean premium pricing. MI is of the belief that the Rebel TRX will be most comparable to the Ford F-150 Raptor with the optional  $11,000 luxury package, meaning a roughly $70,000 price tag for the Ram.

The only thing a Ram insider would divulge concerning the Hellcat's output was that there will be more than 700 horses, which could mean more or less than the typical Hellcat's 707 hp. The engine will send that output to an updated version of the ZF eight-speed automatic usually found in tandem with the 6.2-liter V8, through a locking Borg Warner transfer case and through a heavy-duty four-wheel-drive system. If the TRX follows the standard Rebel template, a quad-cab model will get a 6-foot-4-inch bed, a crew cab version gets the 5-foot-7-inch bed. Among the rumored options are flashy graphics, beadlock wheels, and a bed-mounted spare tire.

There's a debut perhaps headed our way at this year's Detroit Auto Show (should that go off as scheduled), followed by an official launch on September 8.