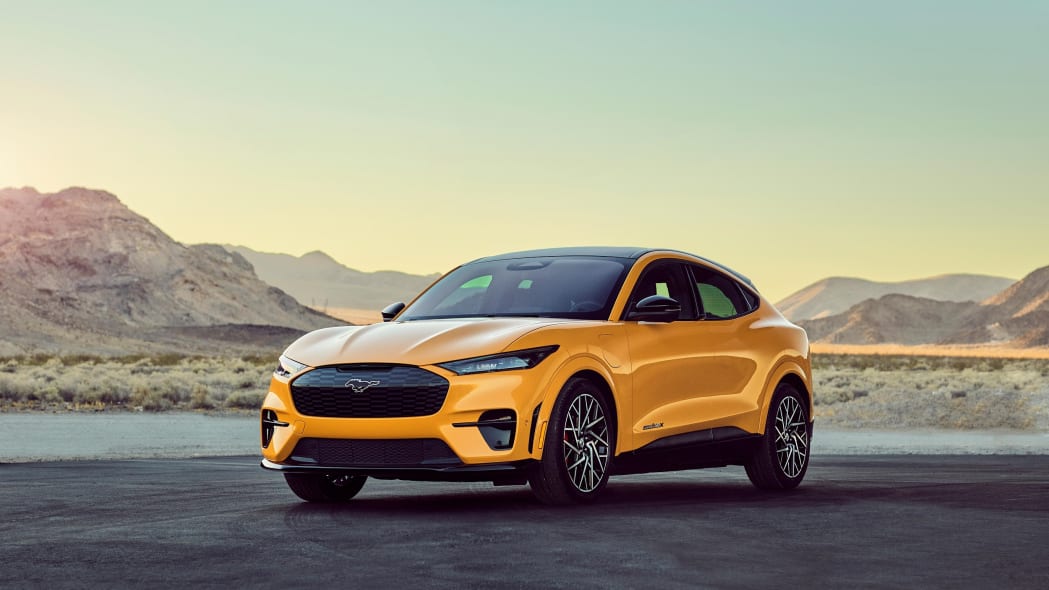 It will be available halfway through 2021

The Ford Mustang Mach-E electric crossover isn't technically related to the Ford Mustang, but it can certainly accelerate like one. It will soon gain a quicker variant appropriately named Performance Edition that can nearly outsprint the mighty, 760-horsepower GT500 in a straight line.

Based on the GT trim, the Performance Edition is powered by two electric motors that make 480 horsepower and a pickup-like 634 pound-feet of torque. For comparison, the regular Mach-E GT posts 480 and 600, respectively. Those figures lower its zero-to-60-mph time to 3.5 seconds, which is two-tenths of a second behind the aforementioned GT500 and three-tenths of a second quicker than the Mach-E GT it starts life as. The Performance Edition's top speed hasn't been published.

Ford built the Performance Edition on an 88-kilowatt-hour lithium-ion battery pack that stores enough electricity for up to 235 miles of driving range, though that figure hasn't been certified by the Environmental Protection Agency (EPA). Put another way, the 34 additional pound-feet of torque saps 15 miles of range from the Mach-E.

Moving beyond the powertrain, the Performance Edition gains 19-inch front rotors gripped by Brembo calipers, a sportier MagneRide suspension also offered on the two-door Mustang, a specific gray grille, and 20-inch wheels painted black. Inside, the passengers are treated to front sport seats and aluminum-look trim on the dashboard. Several colors borrowed from the Mustang, including Grabber Blue and Cyber Orange, are on the palette.

While the Mustang Mach-E is scheduled to enter production in Mexico by the end of 2020, the GT and GT Performance Edition will not be available until late summer 2021. That's a bit later than Ford announced. The GT starts at $62,700 before government incentives enter the equation; it wasn't included in Ford's recent price-slashing campaign. We don't yet know how much the Performance Edition will cost.