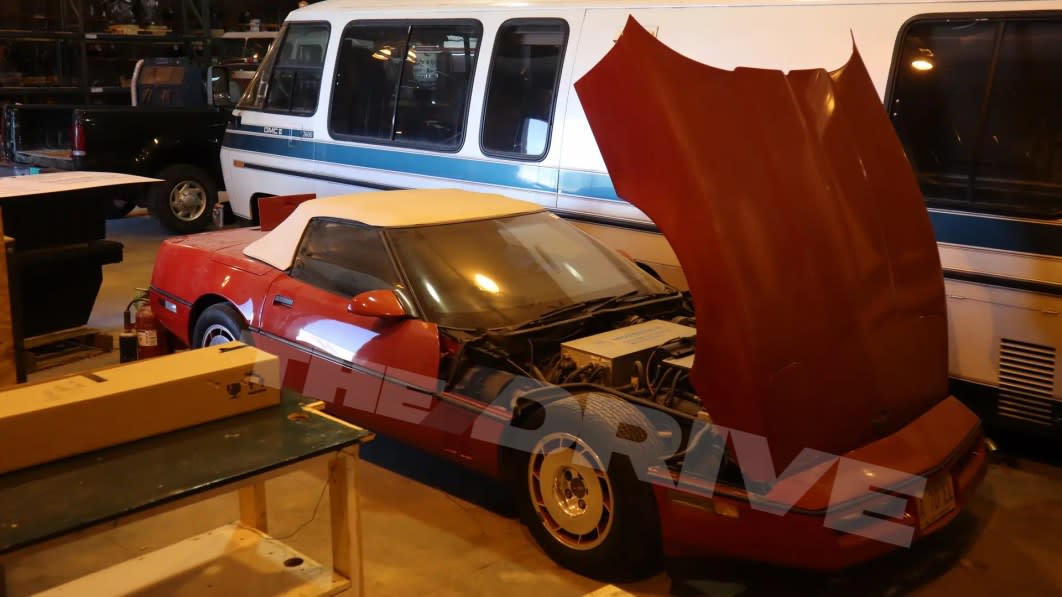 This car has remained a secret for many years

Chevrolet confirmed it will sooner or later release an electric variant of the Corvette. When it does, the battery-powered sports car won't be the first of its kind. Motorola Automotive built an electric Corvette prototype in the 1990s. The red convertible remained shrouded in secrecy for decades, but it was recently discovered gathering dust in what looks like the warehouse of a salvage yard in Gurnee, Illinois.

Our friends at The Drive shed light on this enigmatic fourth-generation Corvette. Built with a V8 engine in 1987, the model was modified to run on electricity at some point in the 1990s. Many details about the conversion are murky at best, and no one at Motorola or General Motors remembers this car or the project it emerged from, but a thick stack of documents details some of the modifications that were made.

Visually, nothing sets the prototype apart from a regular-production 1987 Corvette. It's red with a white top and it sits on the factory-fitted alloy wheels. It's a different story under the hood, where a series of boxes occupy the space normally reserved for the V8. Some are labeled "high voltage" and contain some of the deep-cycle batteries that power the car, according to The Drive. Motorola stuffed more batteries in the trunk and, interestingly, a few seem to be integrated into the floorboards. Were engineers looking for ways to lower the center of gravity?

Precisely what powers this prototype isn't known yet. It's an electric motor, that's a given, and it spins the rear wheels via a four-speed manual transmission. Some of the documents detail what to do (and, significantly, what not to do) when starting and driving the Corvette. Starting it sounds simple: turn the key to "on" without touching the throttle and wait until you hear a humming sound. Driving it is straightforward, too: Motorola says to "use the throttle pedal as you would in any other car," though first can be engaged without pressing the clutch.

While the car doesn't run, it was allegedly fairly quick. Some of the paperwork pegs its output at up to 428 horsepower.

Motorola went to significant lengths to keep this project a secret, engineers notably weren't allowed to charge the car while visitors were in the building, and the prototype consequently asks more questions than it answers. Head on over to The Drive to read the full story and see more photos.