To get an idea of how big a deal the Neon was, consider all the concept cars Chrysler based on it Automakers rarely build concept cars for the heck of it. The paper that designers draw on is cheap; the real-life versions, even the non-working ones, aren’t. So concept cars typically arise from a purpose, sometimes clearly stated, sometimes befuddling, and sometimes misguided. Chrysler needed the Neon to succeed for multiple reasons, and that necessity was reflected in the many varied concept cars based on the friendly little compact car.

The Plymouth brand had, by the early 1990s, become largely redundant. Little differentiated the brand’s offerings from the models that it shared with Dodge and Eagle, it had no truck line other than the Voyager minivan, and Dodge had outsold Plymouth for the prior decade or so. It was high time for a revamp, one that would play an integral part in keeping Chrysler’s value/volume brand around.

It didn’t exactly help that Plymouth cars had developed a reputation as poorly built, staid vehicles best suited as company cars. As Bob Sheaves at Allpar noted, Lee Iacocca bristled at the commonly held conception that American cars couldn’t compete with Japanese cars on quality, fuel efficiency, or innovation, so he decided to “show just what Chrysler could do” by initiating a new compact car project, codenamed PL.

According to Sheaves, the project combined the efforts of a group of ex-AMC employees who’d previously worked on a follow-up to the Alliance and a group of Chrysler employees who’d previously worked on the L-body Omnirizon. Their goal: something “lightweight, fuel sipping, powerful, comfortable in an American manner, yet to cost no more than a bit under $4,000 to build, with a retail sales price of no more than $8,000.” 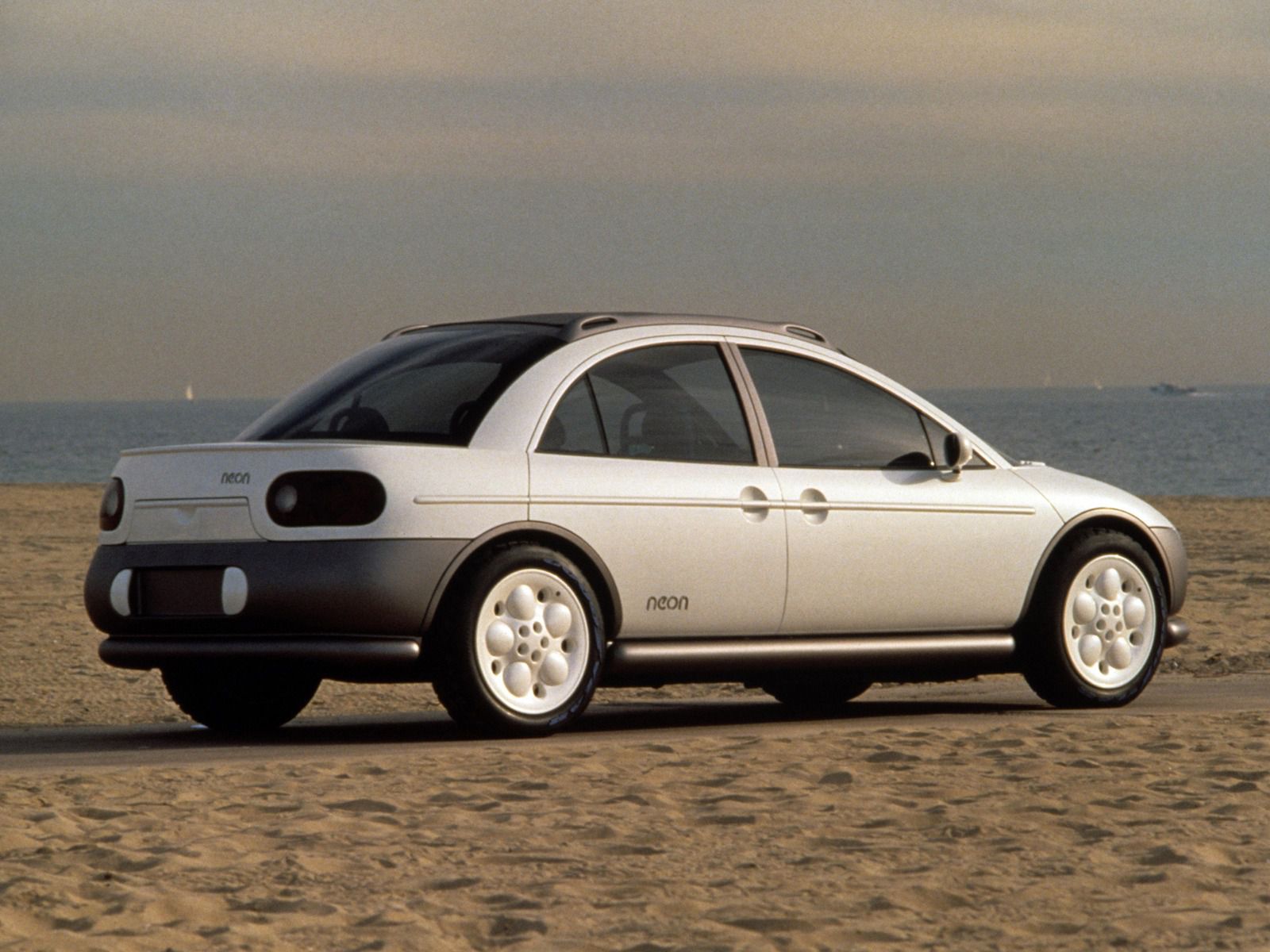 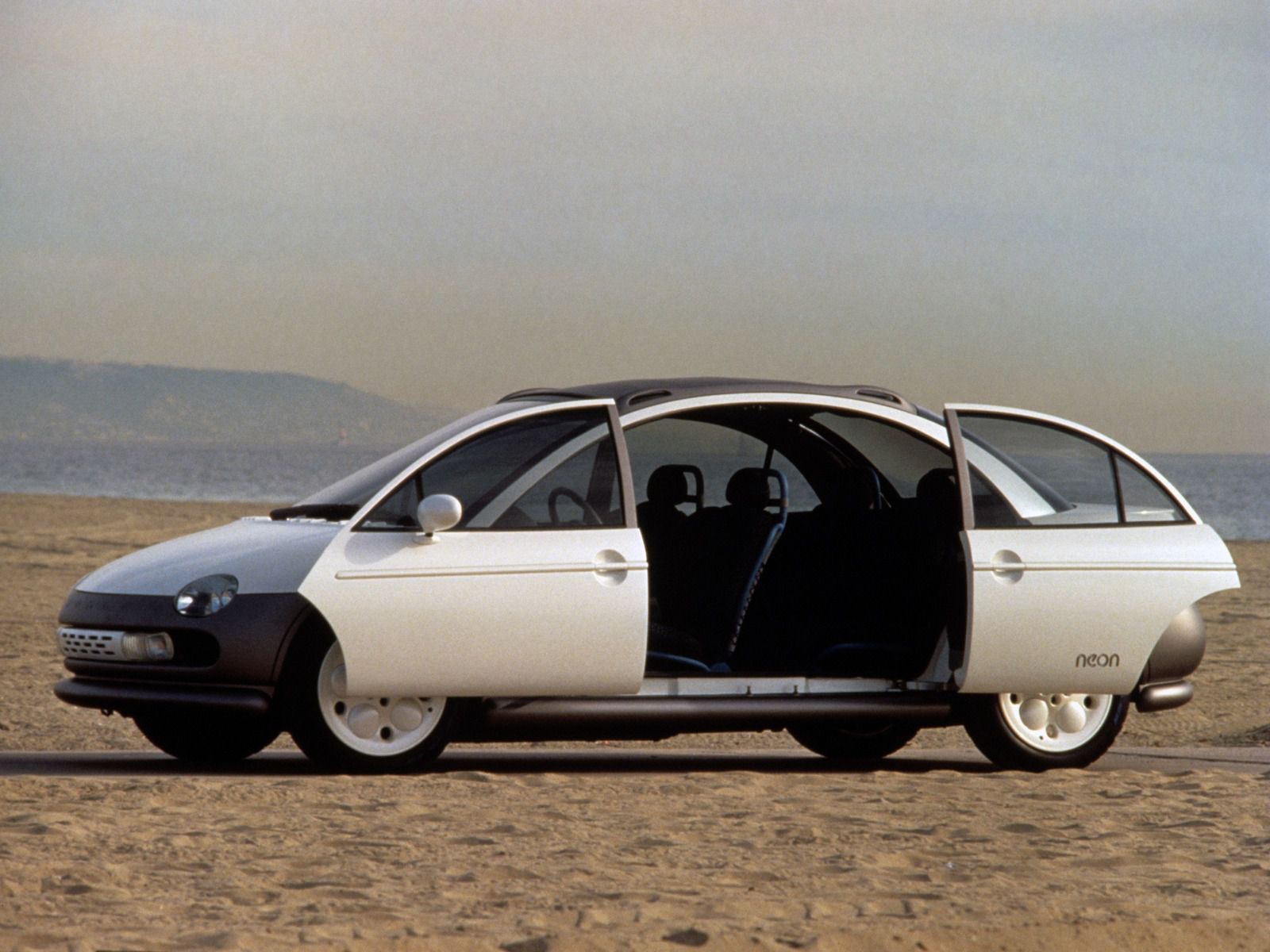 For a short time, Chrysler’s engineers considered powering the PL with a direct-injection two-stroke engine developed in partnership with Mercury Marine, and a 1.1-liter three-cylinder version of that two-stroke – good for 100 horsepower – ended up powering the first Neon concept. Appearing in 1991 as a Dodge, the Neon concept included a number of innovative features, from the sliding front and rear doors that negated the need for a B-pillar to the power sliding fabric sunroof.

Ironically, given the fact that the two-stroke was, y’know, a two-stroke, Chrysler’s press release announcing the 1991 Neon concept emphasized the car’s “environmentally friendly attributes:”

"Virtually every component on the Dodge Neon is made up of, or can be, recycled into reusable components. Interior panels are coded to identify the type of plastic, furthering the recycling process. Neon features a manual on-board trash compactor and wheels made from recycled aluminum."

The 1991 concept gave a pretty good preview of the production Neon, which bowed in early 1994 as a 1995 model (in both Dodge and Plymouth versions), even without the two-stroke engine, sunroof, and sliding doors. But to accompany the launch and its incessantly happy marketing campaign, Chrysler prepared no less than four Neon-based concept vehicles in 1994 and 1995. 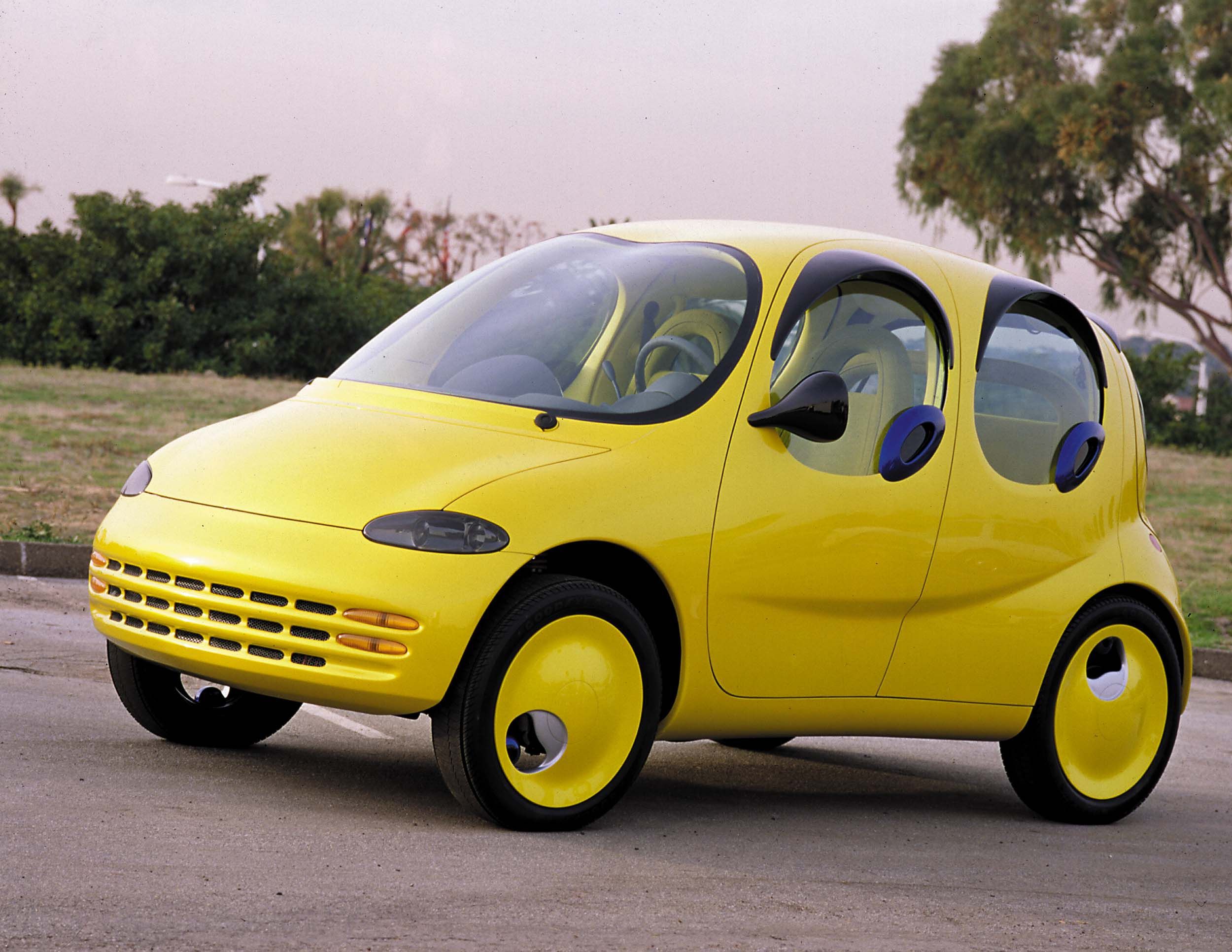 The Expresso, sometimes referred to as a Chrysler sometimes as a Plymouth, envisioned the Neon as a family taxi and went heavy on the asymmetric circles and ovals. It used a two-foot-shorter Neon platform and treated its four occupants more like airline passengers, with about the only storage available under the seats but with an LCD entertainment system to keep the occupants occupied. A 132hp 2.0-liter Neon four-cylinder (the four-stroke production version) powered it. The Aviat, a coupe version reportedly designed via computer to maximize the Neon’s aerodynamic profile, minimized front surface openings by placing radiators in the rear wheel pods while keeping the engine (a 145hp dual overhead-camshaft version of the 2.0L four) up front. As if its scifi design weren’t enough, it also used scissor doors for entry. 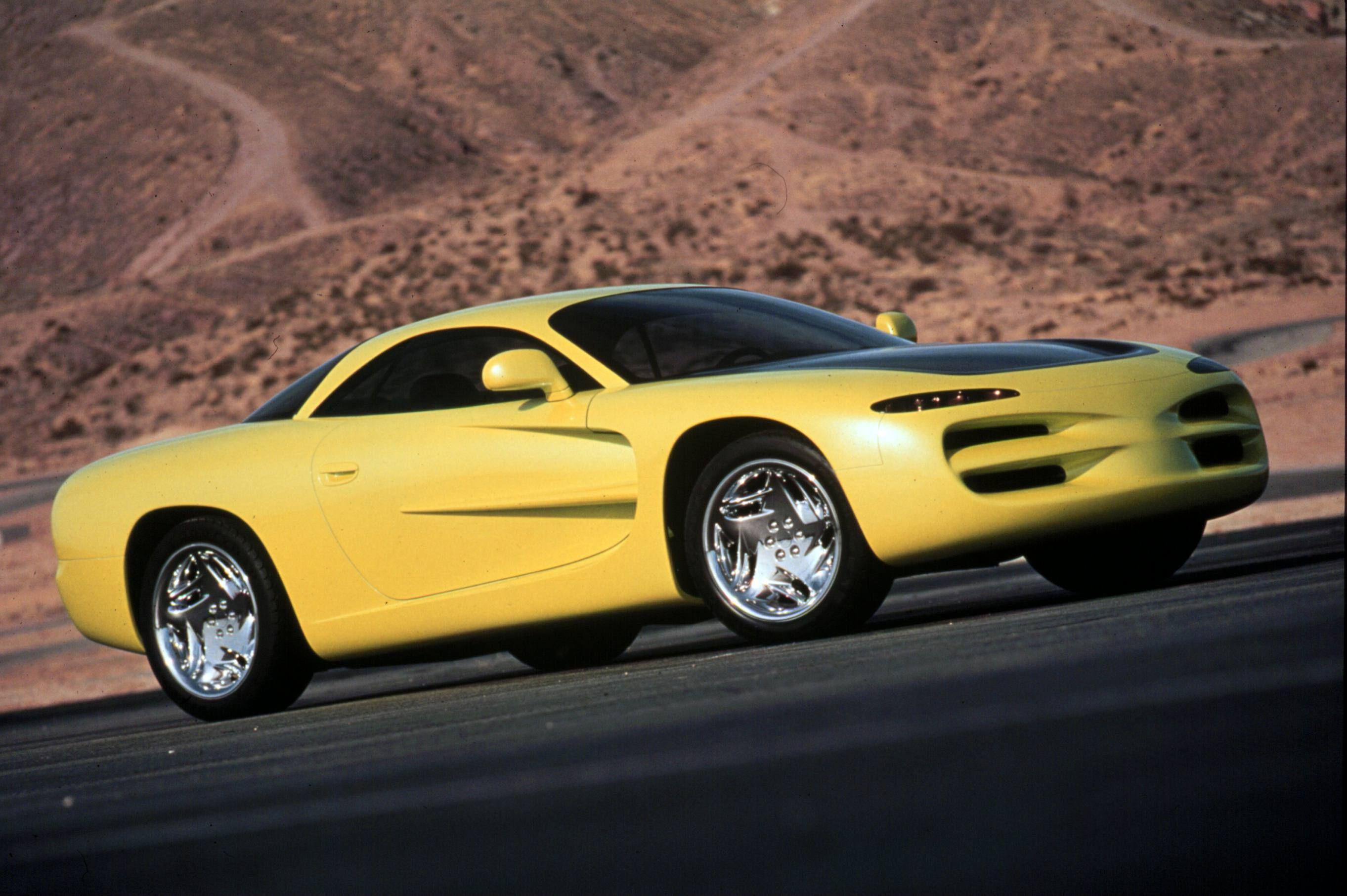 By far the most aggressive and ambitious Neon-based concept car, the Dodge Venom was one of Chrysler’s multiple attempts to introduce a sort of budget Viper. This one did use a Neon platform, but re-engineered to be rear-wheel drive and to use an LH 3.5-liter V-6 good for 245 horsepower, a six-speed transmission, and 19-inch front/20-inch rear wheels. 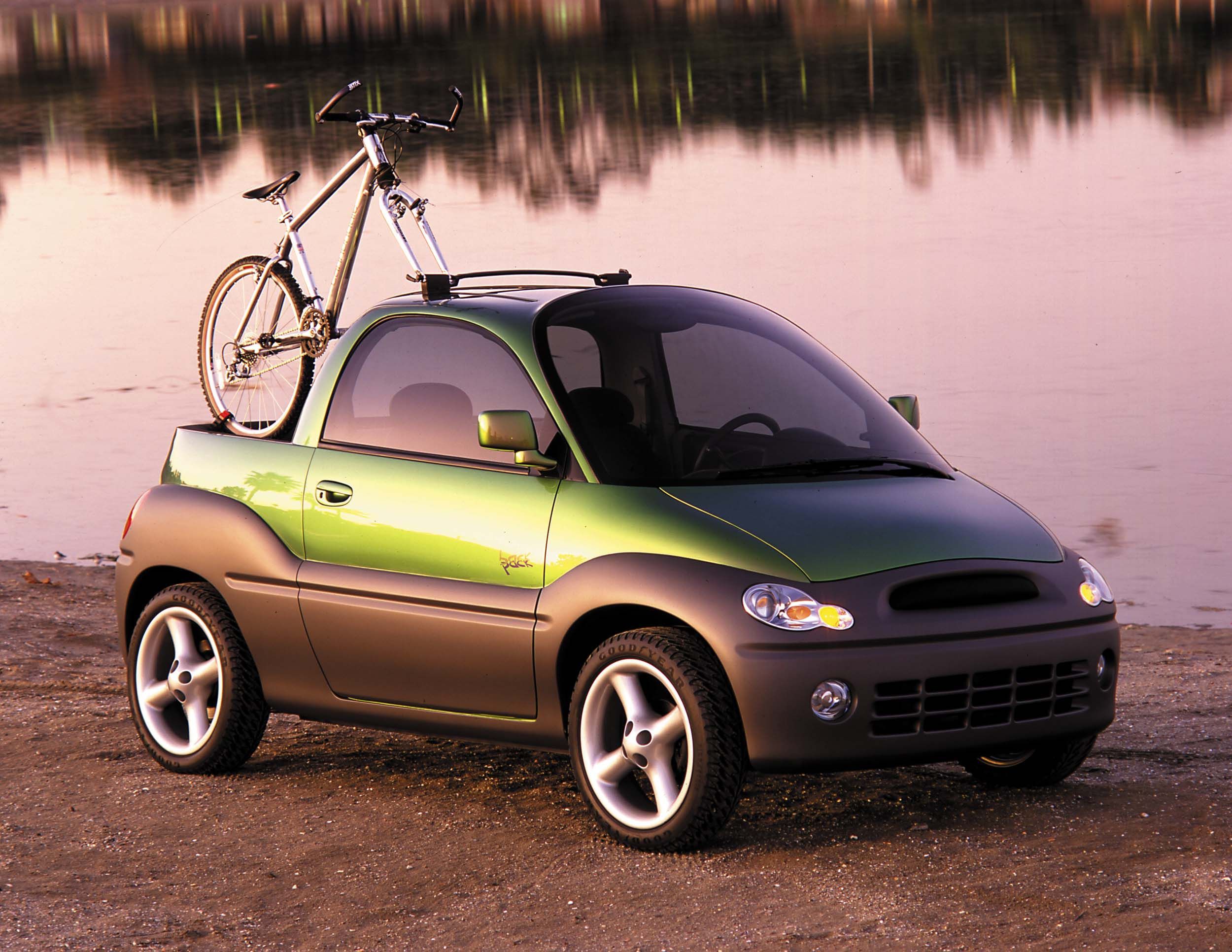 A year later, Chrysler followed the Expresso/Aviat/Venom trio with another Neon-based concept, the Back Pack. In addition to the name lifted straight from a 1992 Geo Tracker concept vehicle, the Back Pack featured a passenger seat that folded into a table suitable for a laptop, a small jump seat, a tiny pickup bed, and integrated mounts for a mountain bike. A 135hp 2.0-liter four-cylinder powered its front wheels. With the Neon going on to become a sales success, Chrysler throttled back on Neon-based concepts after the Back Pack. But then in 1997, with Plymouth’s Prowler headed from concept to production, Chrysler execs and stylists wanted to see what the rest of the Plymouth lineup would look like with Prowler-derived styling, starting with a five-door four-passenger sedan called the Pronto. Much like the 1991 Neon concept, the Pronto experimented with composite plastic body panels and featured a sliding fabric roof; much like the 1994 Expresso concept, the Pronto maximized interior space with a high roof.

Exactly how much Neon made it into the Pronto or its successor concept vehicle, the Pronto Cruizer, isn’t clear. The former used the same wheelbase as the Neon but a 115hp 1.6-liter four-cylinder engine. And while the production PT Cruiser used some of the same engines as the Neon, Chrysler designated its slightly shorter chassis the PT platform.

Though neither the Neon or the PT Cruiser were enough in themselves to save the Plymouth brand, they did go on to post notable sales figures. The former remained in production through the 2005 model year, selling more than 2 million units, while the latter lasted through 2010, selling 1.35 million units. And though the Neon did suffer in terms of reliability due to early cost-saving measures, it did go on to defuse criticism of Chrysler’s ability to produce a quality small car, perhaps aided in some small way by the concepts based on its platform.

All of the concepts above still reside in FCA’s collections, now housed in the former Conner Avenue Assembly Plant.