Coming this summer: Gas stations running out of gas 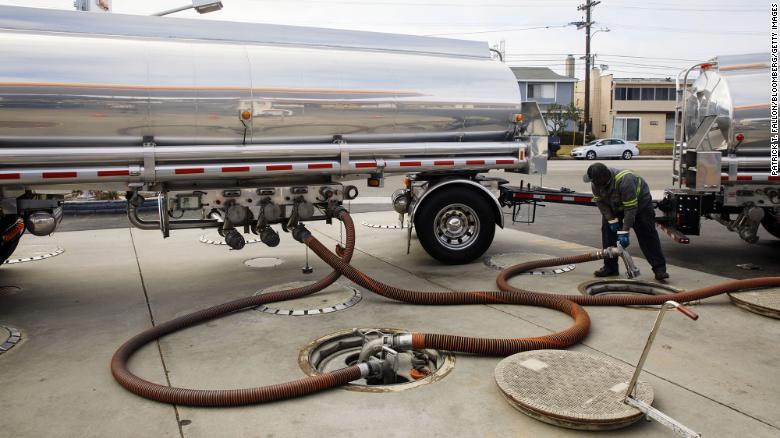 A worker disconnects hoses after delivering gasoline to a station in Redondo Beach, California. A shortage of tanker truck drivers could cause some stations to run out of gas this summer, according to industry experts.

New York (CNN Business) -- Millions of people stuck at home for more than a year are expected to hit the road for much-needed post-pandemic vacations this summer. Good luck finding gas.

Not that there's a looming shortage of crude oil or gasoline. Rather, it's the tanker truck drivers needed to deliver the gas to stations who are in short supply.
According to the National Tank Truck Carriers, the industry's trade group, somewhere between 20% to 25% of tank trucks in the fleet are parked heading into this summer due to a paucity of qualified drivers. At this point in 2019, only 10% of trucks were sitting idle for that reason.
"We've been dealing with a driver shortage for a while, but the pandemic took that issue and metastasized it," said Ryan Streblow, the executive vice president of the NTTC. "It certainly has grown exponentially."
Indeed, drivers left the business a year ago when gasoline demand ground to a near halt during the early pandemic-related shutdowns.
"We were even hauling boxes for Amazon just to keep our drivers busy," said Holly McCormick, vice president in charge of driver recruitment and retention at Groendyke Transport, an Oklahoma tanker company. "A lot of drivers didn't want to do the safety protocols. We're also working with an aging work force. Many said 'I might as well take it as a cue to retire.'"
Not just any truck driver is allowed to drive a tanker truck. It requires special certification, including a commercial driver's license, and weeks of training after being hired. And while the jobs are more attractive than some long-haul trucking jobs that can keep drivers away from home for days or weeks at a time, it is strenuous, difficult work.
McCormick, who runs the workforce committee for NTTC, said another problem was the shutdown of many driver schools early in the pandemic. The pipeline of new drivers those schools would have produced has yet to be filled, she said. And then there's a new federal clearinghouse that went online in January 2020 to identify truck drivers with prior drug or alcohol violations or failed drug tests, which knocked about 40,000 to 60,000 total drivers out of the national employment pool.
In normal times, driver turnover can run around 50% on an annual basis, but that spiked to a roughly 70% annual rate in April of last year, according to Brad Fulton, director of research and analytics at Stay Metrics, a trucking recruiting and retention firm. Many of the drivers who hired on at tanker carriers last spring when the pandemic first hit left the field relatively quickly, sometimes taking jobs in industries such as construction, which has been booming over the last year.
Tanker operators are raising pay to try to fill their drivers' seats, and raising the rates they charge customers accordingly. "I had to double my recruiting budget to get the same number of drivers," said McCormick.
Ripple effects
Jeff Lenard, spokesman at the National Association of Convenience Stores, said his members are very worried about what the driver shortage will mean for their deliveries, especially with demand for gas already back up to 97% of where it was at this time in 2019.
"I've talked to retailers, they say there could be places where there are brief outages," he said. "If they have no fuel, they have no business. People aren't going to stop in for a sandwich if you don't have fuel."
Vacation hotspots are most at risk of shortages, and there were some sporadic outages reported in Florida, Arizona and Northwest Missouri during the recent Spring Break period, said Tom Kloza, chief oil analyst for the Oil Price Information Service.
But even if only a few stations run out of gas, that could spark a run on gasoline as drivers will start topping off their tanks to avoid running dry down the road, said Kloza.
"Imagine the hoarding with toilet paper and topping off of gas tanks that we see after hurricanes and you can see what might happen," said Kloza.
The problem is made worse by the strong demand for gas, he added, which some forecast could top 10 million barrels a day for the first time ever at various points this summer.
"It doesn't take much — crowd behavior can provoke shortages," he said.
Data from Adobe shows that a rebound in hotel bookings is running ahead of the rebound in airline bookings, with flights down 22% from 2019 while hotel reservations remain only 18% lower. That suggests that many people eager to travel again are planning to drive to their destinations, according to Taylor Schreiner, director of Adobe digital insights
All of this could put pressure on gas prices, which typically rise at the start of the summer as seasonal regulations take effect requiring the more expensive "summer blend" of gasoline needed to combat smog.
The national average price of regular gas already stands at an average of $2.89 a gallon, up more than 60% from a year ago when prices and demand were bottoming out. Kloza thinks the national average will flirt with $3 a gallon this summer, and could top that level if any hurricanes hit the Gulf Coast or there are any other disruptions to supply, such as a refinery fire.
SOURCE: CNN BUSINESS
← Go Back To List