How plucky AMC made the 1957 Rambler Rebel America's fastest sedan

The fabulous 1957 Rambler Rebel was a limited-production, high-performance hardtop sedan powered by an AMC-designed, 327-cu.in. V-8 producing 255 hp. Rebel was the fastest American sedan in 1957.

The 1957 Rambler Rebel is one of those special, highly unusual cars that come along only once in a blue moon: a one-year-only effort with outstanding performance that's mostly been ignored by both vintage car and muscle car fans. The fact that it was the fastest American sedan for 1957 makes the situation all the more curious.

The idea of offering a four-door performance car came about as a result of low product development budgets. When American Motors was on the ropes in 1955, CEO George Romney made a decision to halt development of new senior Hudson and Nash models, instead pushing forward an all-new Rambler for 1956 rather than 1957. However, AMC was so short of money that Romney had to limit body styles for the new Rambler to four-door models only—both sedans and station wagons. Although it made sense because it focused on the most popular body styles, it came at the expense of having a glamour car like a convertible or two-door hardtop. To add a little spice, company designers also created four-door hardtop sedan and hardtop station wagon models, offered in high-fashion Custom trim. They helped add a dash of glamour to showrooms, and the 1956 Ramblers were well-received. 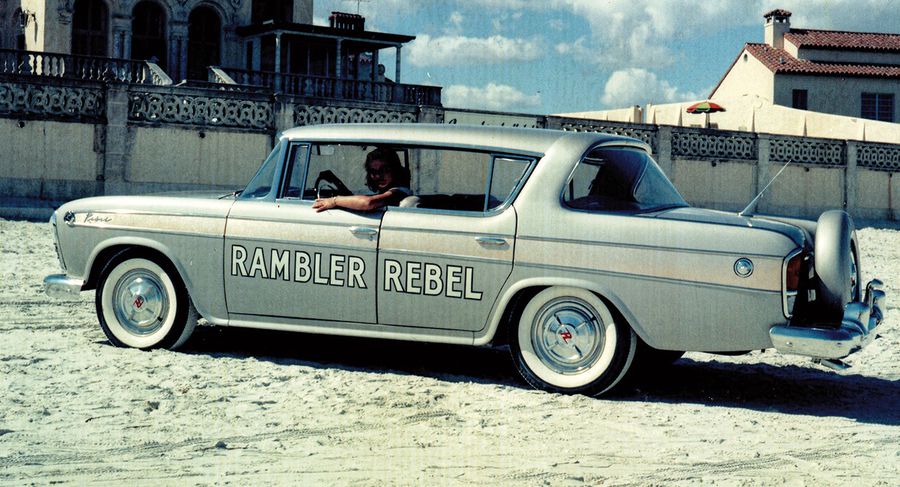 The Rambler hardtops featured extra reinforcing in the body sills, quarter panels, and door posts to ensure a minimum of body flex. This Rebel is pictured on the beach at Daytona.
Because of budget constraints, styling for 1957 was almost identical to the prior year, with only the addition of a floating bar to the upper grille and altered exterior trim to differentiate them. But this year Rambler offered a V-8 for the first time, a new 250-cubic-inch, 190-horsepower engine AMC designed and produced, while the senior Nash and Hudson cars got a potent 327-cu.in. version of the same powertrain. In a flash of genius, someone at AMC suggested offering a really special version of the Rambler Custom four-door hardtop, powered by the Ambassador/Hornet V-8. It would be fast and stylish, the ideal combination for a halo car. That combo—a midsize car powered by a V-8 from a full-size car—became the formula for later muscle cars that appeared in the Sixties. The hot Rambler was approved for production, albeit on a limited basis. How they got frugal George Romney to agree to it is a wonder, but he did.

Most of the press photos taken of the Rebel were black and white; the color ones in this article were given to the author by one of the AMC engineers who traveled to Daytona for the Speed Week event.
The 1956-'57 Rambler had been designed from the beginning to accommodate AMC's new V-8 and, since the 250- and 327-cu.in. blocks were the same size, swapping in the 327 V-8 was an easy installation. The Rebel's new engine made 255 hp at 4,700 rpm and a whopping 345 lb-ft of torque at just 2,600 rpm. Because the factory would produce just 1,500 examples, transmission choices were limited to a heavy-duty T-85 three-speed manual with overdrive, or a beefy Flashaway Hydra-Matic, supplied by GM. A stout Borg & Beck pressure plate clutch was specified with the manual gearbox.
Rebel's suspension was beefed up to handle the extra power with heavy-duty adjustable shock absorbers as standard equipment and thicker front and rear antiroll bars, along with flanged brake drums. 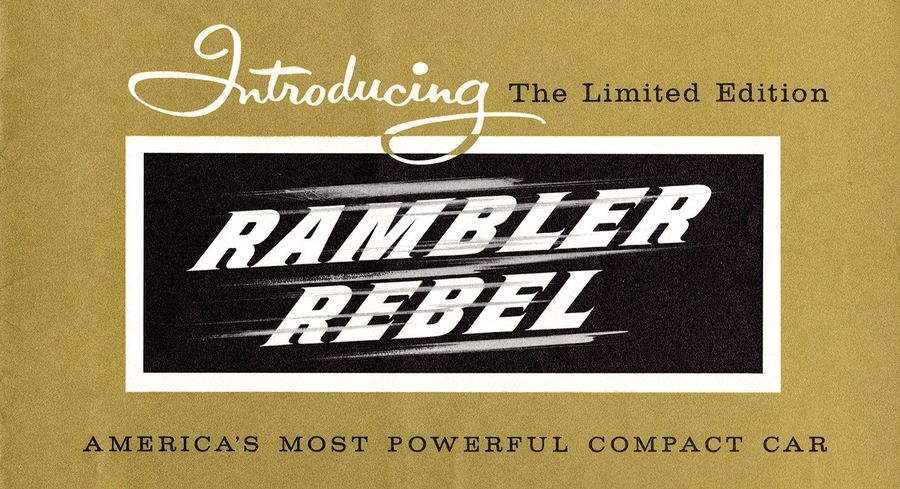 American Motors created this unique sales brochure for the limited-production 1957 Rebel. ILLUSTRATIONS COURTESY OF THE PAT FOSTER COLLECTION
It was decided that just one color would be provided, a metallic silver-gray called, appropriately enough, Rebel Silver, offset by bronze-gold-anodized aluminum side trim with the Rebel name spelled out in script on the leading edge. Special full wheel discs were included for additional glitter. The Rambler's massive die-cast chrome grille provided an abundance of bright metal pizazz up front.

Starting to prepare for the 0-60 test run featured in Motor Trend magazine. For safety reasons, the full wheel discs were removed just prior to the run.
Style-wise, the Rebel was a great-looking car with clean lines that included a flat roof and bodysides: AMC stylists even eliminated the "shoulders" seen on most 1950s cars, in order to maximize interior width. The goal was to provide the same interior roominess as a full-size car with compact exterior dimensions. Wheel openings were large to show off the big 15-inch wheels, and unique wheel covers. The side trim's contrast with the silver paint was an especially attractive combination, and the reverse-slant C-pillars added a distinctive touch to the overall styling. It wasn't long before other companies copied AMC's reverse pillar look.
To compensate for the lack of a B-pillar, AMC engineers specified greatly beefed-up rockers, quarter panels, and center posts for the four-door hardtops, so body fit has held up very well over the years. Rust has generally not been an outsized problem, probably due to the standard factory undercoating. 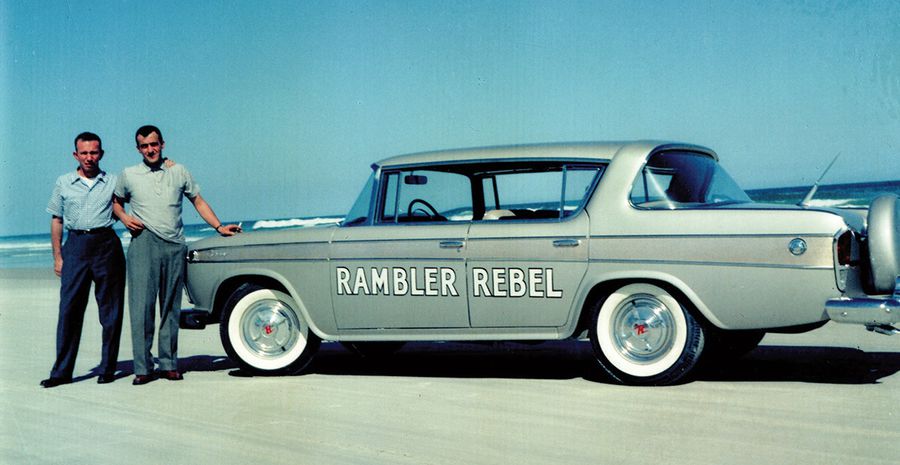 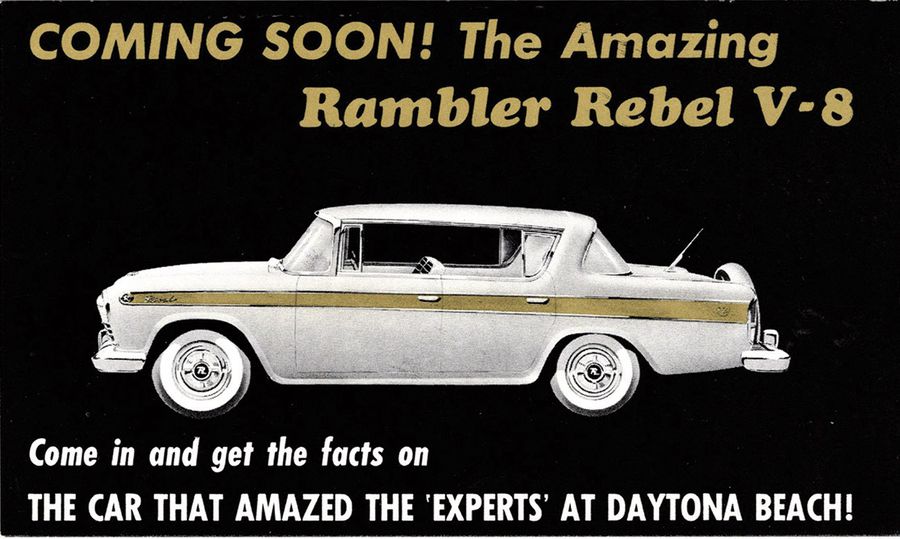 AMC also offered this postcard to stir interest in the Rebel.
Anyone wanting even more luxury could order AMC's outstanding air conditioning system, Solex tinted glass, six-ply nylon "Blue-Streak" high-speed whitewall tires, a continental tire mount, and seat belts. The vast majority of Rebels came through very well-equipped, with 1,031 units fitted with the automatic transmission (the remaining 469 Rebels got the three-speed/overdrive setup) and 914 getting the continental spare tire. Nearly half—731 to be exact—were equipped with Solex glass. All were given factory-applied undercoating and backup lamps, but only 83 buyers ordered air conditioning. All but one was equipped with a factory radio.
Marketing decided to endow the new car with a special name—Rebel—which may have come from famed NASCAR driver Frank "Rebel" Mundy, who'd earlier campaigned both Nash and Hudson cars in NASCAR. 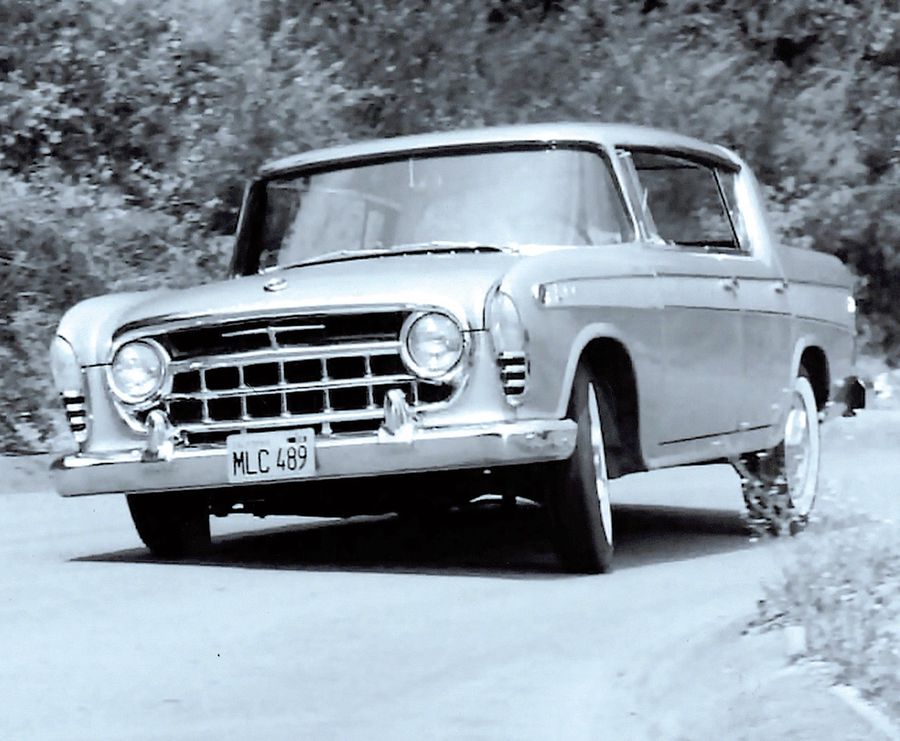 A '57 Rebel undergoing road testing at AMC's proving grounds test track in Burlington, Wisconsin. The Rebel got suspension modifications to help it handle the amazing power from its 327-cu.in. AMC V-8.
It turned out that 1957 was a big year for American performance cars, with red-hot examples from just about every U.S. brand. With a slew of new high-performance cars just begging to be compared, Motor Trend decided to do just that. Tested for 0-60-mph acceleration were an Oldsmobile with the hot 300-hp, 371-cu.in. V-8 with three two-barrel carbs; a supercharged 289-cu.in., 275-hp Studebaker Golden Hawk; a 290-hp Pontiac Tri-Power 347-cu.in. V-8; a 300-hp supercharged Ford and Thunderbird; a hot Chrysler 300C with a 392-cu.in. dual-quad V-8; a 345-cu.in., 345-hp dual-quad De Soto Adventurer; a Plymouth Fury with a dual-quad 318 producing 290 hp; two Dodges, including a D-500 powered by a Red Ram 325 that made 285 hp, and a D-500-1 with dual quads and 310 hp; and a Mercury Monterey M-335 pushing 335 hp from its 368-cu.in. V-8. The inclusion of a Rambler among these gorgeous hardtops and convertibles seemed almost silly; after all, Ramblers were economy cars, right? Its 255 hp actually put it down near the bottom of the list of performance engines. 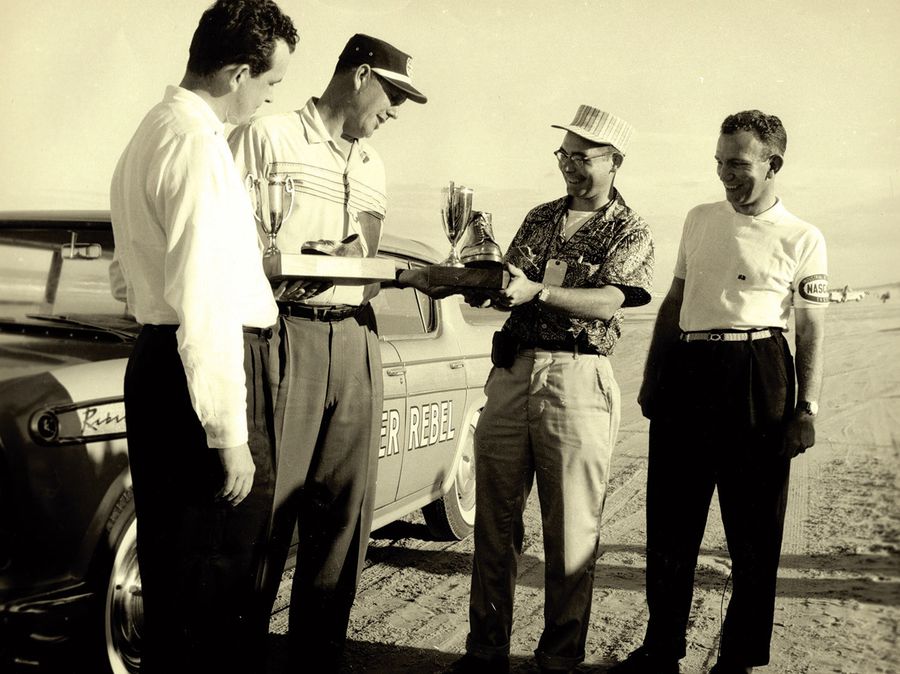 In Daytona Beach testing, the Rebel was the fastest American sedan. Two awards were given: The Rebel's driver received a bronze "lead foot" award, while the slowest car's driver was given a "ballerina slipper" award.
But the Rambler's advanced unibody construction meant it was lighter than most American cars. Another plus: The selection of the three-speed manual with overdrive gearbox meant you got a 4.10:1 axle ratio standard, with stump-pulling 4.44 gears optional. (Hydra-Matic equipped cars came standard with 3.15 gears.)
To cut to the chase, the Rambler Rebel was shown to be America's fastest sedan for 1957. Admittedly, it was close: The Rebel's best 0-60-mph run was timed at 7.5 seconds, while the Chrysler 300C ran 7.6 seconds. But consider such legendary muscle cars as the Studebaker Golden Hawk's 8.7 seconds, or the blown T-Bird's 8.0 seconds, and you can appreciate what the AMC engineers were able to accomplish on a shoestring. Other results included the Plymouth Fury at 8.0 seconds, the Dodge D-500 at 8.8 seconds, and the Pontiac Tri-Power at 7.9 seconds. The only car that could beat the Rebel in acceleration was a fuel-injected Corvette, which did the run in 7.0 seconds to become the fastest American car, while the Rebel was the fastest American sedan. 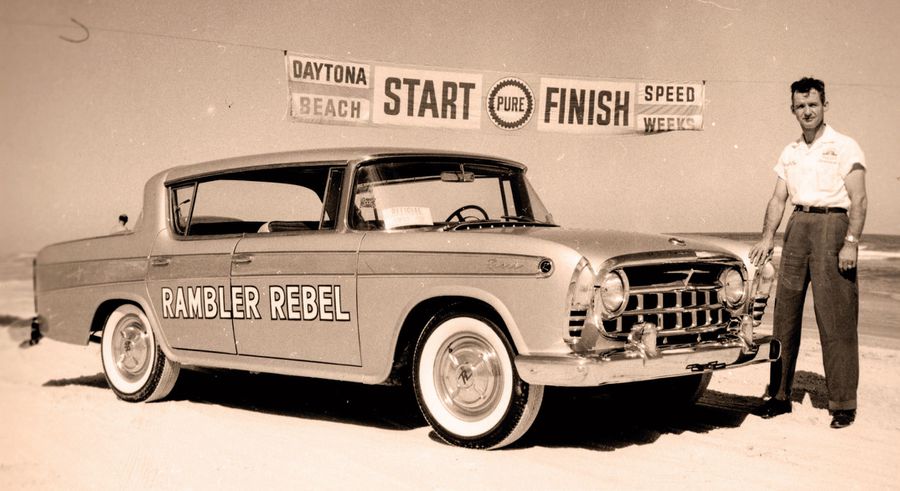 This press photo shows the Rebel at the start/finish line, but carries no identification of who the man standing next to the car is. The Rebel was clocked doing 0-60 mph in 7.5 seconds.
Actually, the Rebel was originally going to offer the new Bendix fuel injection system as an option. According to 1957 Rebel expert Bill Lenharth, author of The Amazing Rambler Rebel, "Nash designer Bill Reddig told me they put the fuel injection in three prototype '57s and ran them on the test track. These were the same cars used to evaluate the suspension and handling needs of the larger V-8." AMC engineers claimed the fuel-injected Rebel would have done the 0-60 run in under 7.0 seconds, but in all probability, we'll never know for certain. The number built with fuel injection has never been completely resolved: some sources claim that six—not three—were produced. None were released to the public, though years ago one person sent me a photo purporting to be a fuel-injected Rebel still in existence in the 1960s. However, the photo showed only a tattered-looking Rebel with the hood closed, so there was no way to verify it had a FI-engine, or indeed, any engine at all! 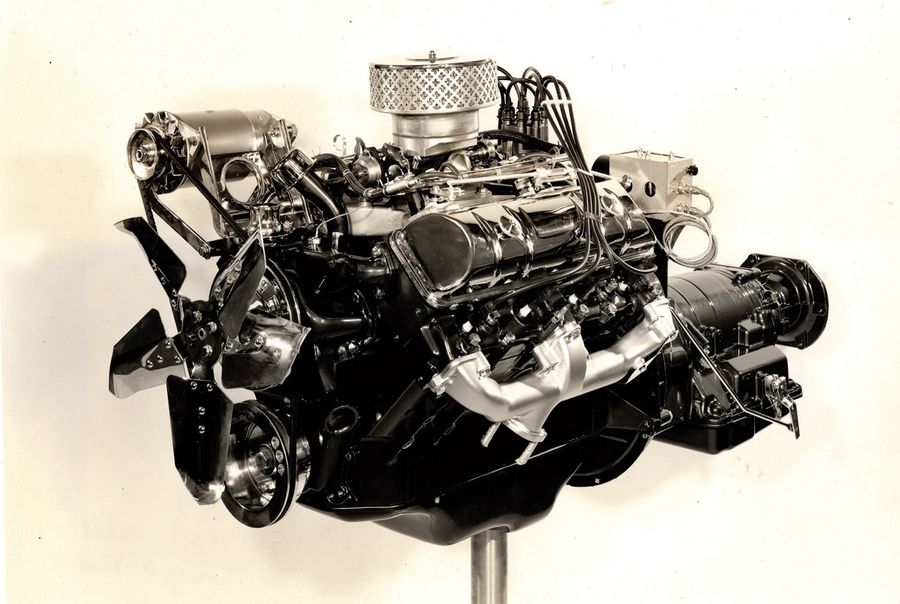 Until very recently, there were few images of the proposed AMC fuel-injected 327-cu.in. V-8, and no press photos. However, some months ago the author was able to acquire a small batch of press photos showing different views of what would have been a most remarkable engine. It's a shame it didn't make it to production.
In any event, in testing, the fuel injection system displayed cold-weather driveability problems to the extent company engineers felt it wasn't ready for production. Apparently, the few FI test cars were converted back to carburetors and sold.
Unfortunately, 1957 was destined to be the only year for the specialty Rebel. For 1958, AMC used the Rebel name on what had been the Rambler V-8. It was a nice car, with its 250-cu.in. V-8 producing 215 hp. It was very quick, but not quite the rocket the '57 Rebel had been. AMC would go on to great success with its economical cars, not returning to the performance market until 1968, when it introduced the new Javelin and AMX. 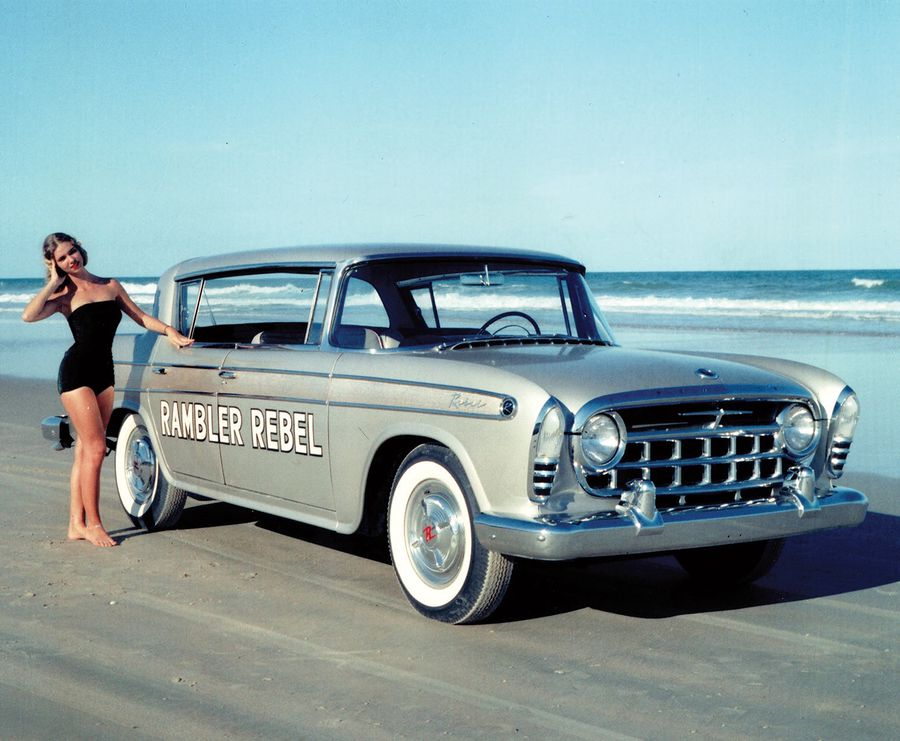 This photo from AMC's engineering archives is one of a small group that were shot in color during Speed Week.
SOURCE: HEMMINGS
← Go Back To List