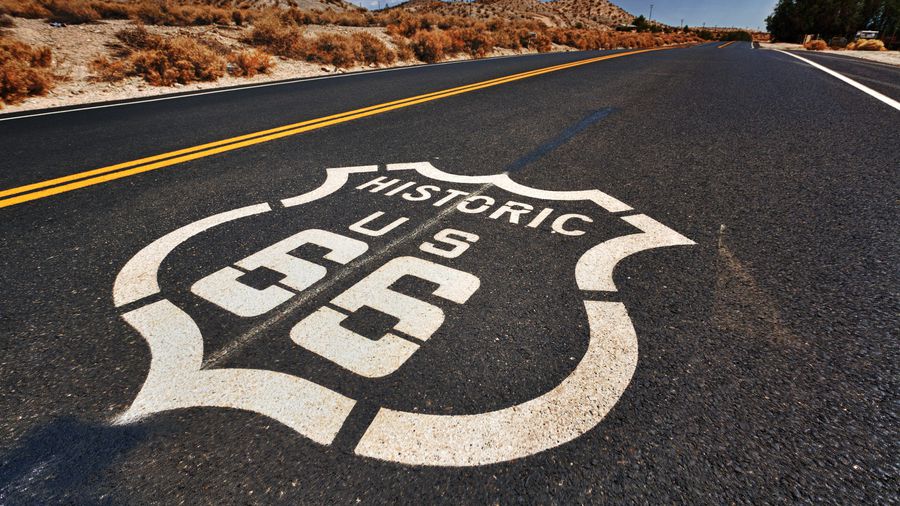 Six years should be plenty long enough to plan a birthday party, right? Even when it's a birthday party that'll stretch out over the course of five years and more than 2,400 miles? That's at least what Congress has proposed after the U.S. Senate recently passed a bill that recognizes the coming centennial of Route 66.
The Route 66 Centennial Commission Act (S.1014), which passed the Senate on Monday, specifies a 15-member commission that will figure out exactly how the country should celebrate the centennial of the Mother Road in 2026. The bill, introduced in April of last year, largely reflects a version originally introduced in the House of Representatives (H.R.66) in 2017 that eventually passed the House in February 2019.
As noted in a press release from the Route 66: The Road Ahead Partnership, supporters of the highway intend to start their celebrations of the highway's centennial as early as next year.

Think of the initiatives as “birthday presents” that individuals, corporations, foundations, organizations, communities, and businesses are invited to give Route 66 over the next five years.

The purpose of these gifts is to support Route 66 through preservation, economic development, promotion, research, and/or education projects. The goal is to position the historic highway, the communities along the road, and the people who live there for success during the next 100 years.

It's questionable to what extent the Route 66 Centennial Commission—or any other federal projects—will provide for preservation of the highway, however. Neither the House or Senate bills, which have yet to be reconciled, provide any sort of funding for the celebrations that the commission recommends and the latter specifically calls for any salary for commission members to be paid out of donations and not from federal funds. While the House version includes a section calling for the Secretary of Transportation's office to "prepare a plan on the preservation needs of Route 66," the Senate version does not address preservation of Route 66 at all.
With the formal end in 2019 of the Route 66 Corridor Preservation Program, a federal program that distributed more than $2.2 million over 18 years to such preservation projects through the National Park Service, Route 66 backers have been left with meager resources to continue their preservation efforts.
Rather than attempt to restart that program, Route 66 backers have instead put their efforts behind getting Congress to declare Route 66 a National Historic Trail. A bill that would secure that designation passed the House in June 2018, but never passed the Senate, and has yet to be reintroduced in the current session of Congress. National Historic Trail designation would not only provide consistent signage along the road, it would also "provide this highway with a permanent program to preserve, promote, and economically develop it," according to Representative Darin LaHood of Illinois, who introduced the bill. 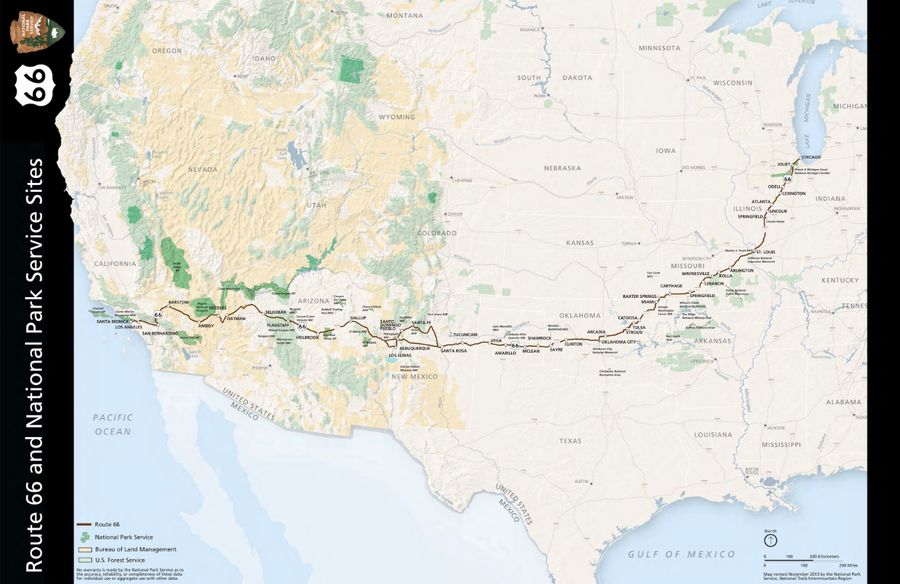 Route 66 map, courtesy National Park Service.
Route 66 arose from the prodding of businessmen Cyrus Avery and John Woodruff, who transformed a proposal to run a Virginia Beach-to-Los Angeles highway—then called Route 60—into the 2,448-mile Chicago-to-Santa Monica highway that John Steinbeck wrote about in Grapes of Wrath, and that, in postwar years, became known as American's Main Street for all the small towns it passed through. Decommissioned in 1985, Route 66 remains more than 85 percent intact, according to the NPS, though little remains of the original 18-foot-wide poured concrete roadbed that hasn't been paved over or widened, and signage varies widely from state to state along the route. In 2008, the World Monuments Fund added Route 66 to its watchlist, noting that the highway's "surviving businesses are struggling, and its roadside architecture—a tapestry of 20th-century Americana—is deteriorating. Some places are threatened by development. Others are falling prey to vandals, decay, and abandonment."
Once the two versions of the bill are reconciled, the Route 66 Centennial Commission Act will then head to the president's desk to be signed into law.
SOURCE: HEMMINGS
← Go Back To List