THE KING OF LE MANS

The Ford GT40 MkII, chassis P/1046. Ford’s claim to the throne of Le Mans, Ferrari’s ultimate dread. Shelby’s most powerful beast, and America’s ultimate statement of motorsport capacity. A Legend by any definition, the P/1046’s history is long. Although it might not always have been treated with the respect it deserves, today it has been brought back to its former glory, and it looks to stay that way for the foreseeable future. 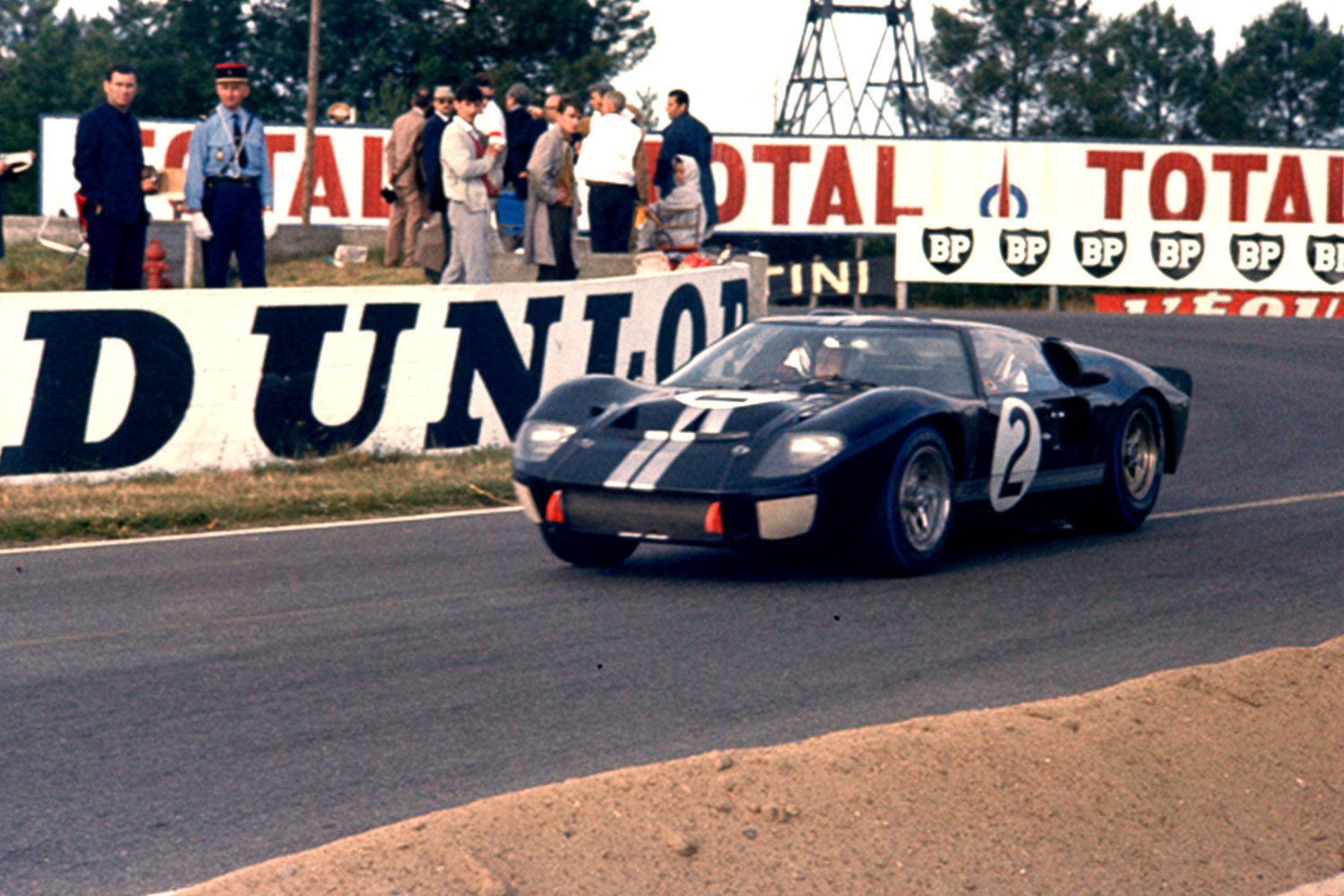 Nothing about the GT40 is short of legendary. It is the result of the rivalry between two titans: Ferrari and Ford. After lengthy negotiations, Ford seemed on its way to sealing a partnership with Ferrari to develop an international racing program. However, Enzo Ferrari himself cut the deal off unexpectedly, and Ford wasn’t going to let that go easily. After the GT40 program was handed to Carroll Shelby, the car started dominating any of the grueling endurance races found on the calendar.

But it wasn’t just about winning: Ford wanted to beat Ferrari in the most challenging and prestigious event in motorsport: the 24h of Le Mans. In 1966, Ford made its claim to the throne of Le Mans. Entering three factory cars into the race, all of them qualified ahead of Ferrari. The No. 2 car, chassis P/1046 driven by Bruce McLaren and Chris Amon, qualified 4th overall. Its top competitor, the Ferrari 330 P3, was powered by a 4L V12 that produced 420hp. Weighing in at 1600lbs, the Ferrari had a power-to-weight ratio of .263hp/lb. The GT40, however, was powered by a 7L V8, producing 485hp. With a weight of 2600lbs, the GT40 had an outstanding power-to-weight ratio of .18hp/lb. The sheer power of the GT40 and its straightforward engineering made it the best candidate for the demanding 24 hours. Although Ford had built a comfortable lead, the Ferraris retired on the 17th hour of the race. 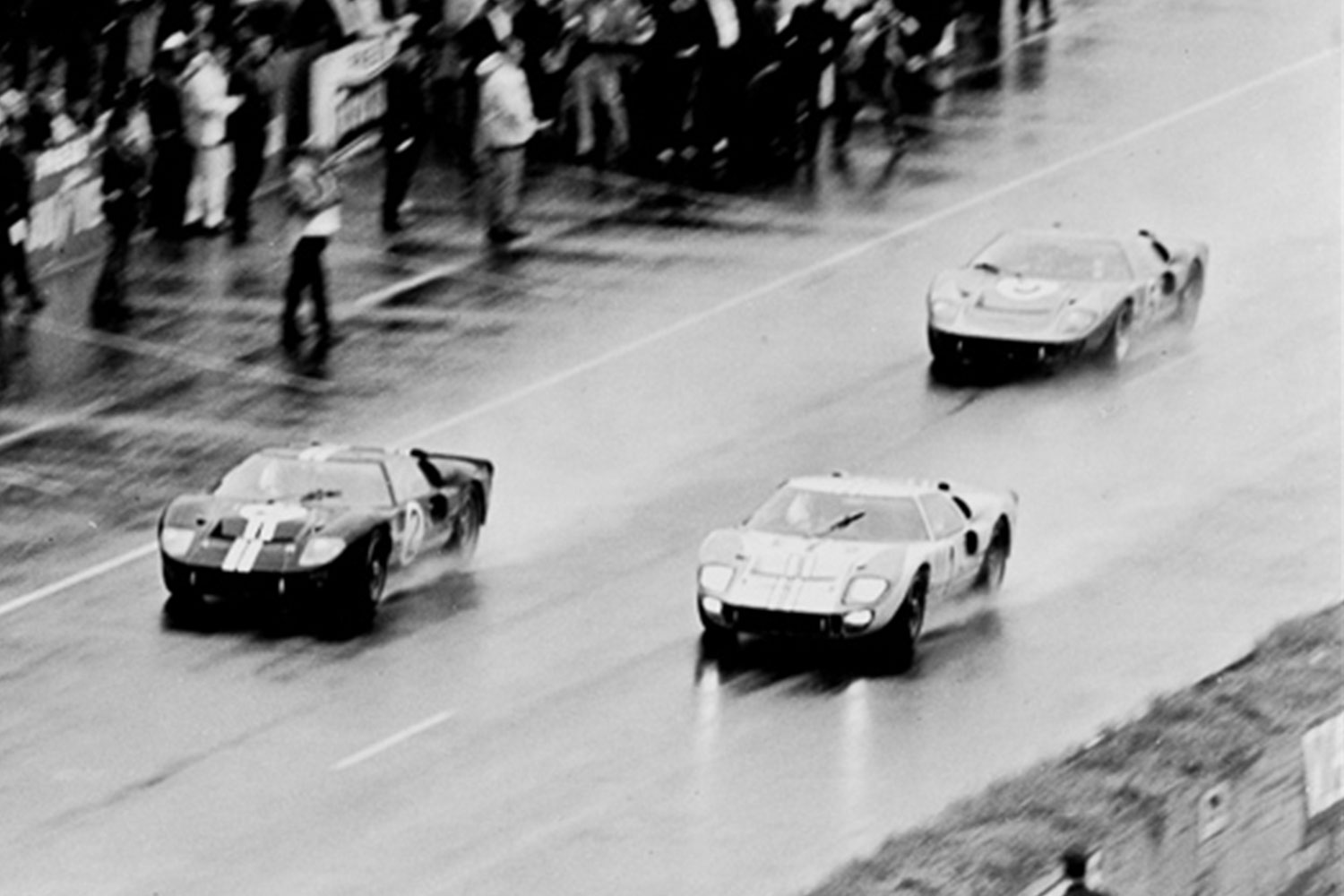 - Ruben Groeneveld about the artwork -

“This car is one of my all-time favorites. Its shape and design are absolutely iconic and instantly recognizable. Famously, it also delivered when it comes to being a force to reckon with on the tarmac. Picking a specific angle to portray this car from was not easy, as it is beautiful from any point of view. However, the one illustrated here seemed fitting to bring it to life. The way the bodywork curves and bends over the wheels and fades into the read end bring forth the might of the beast. 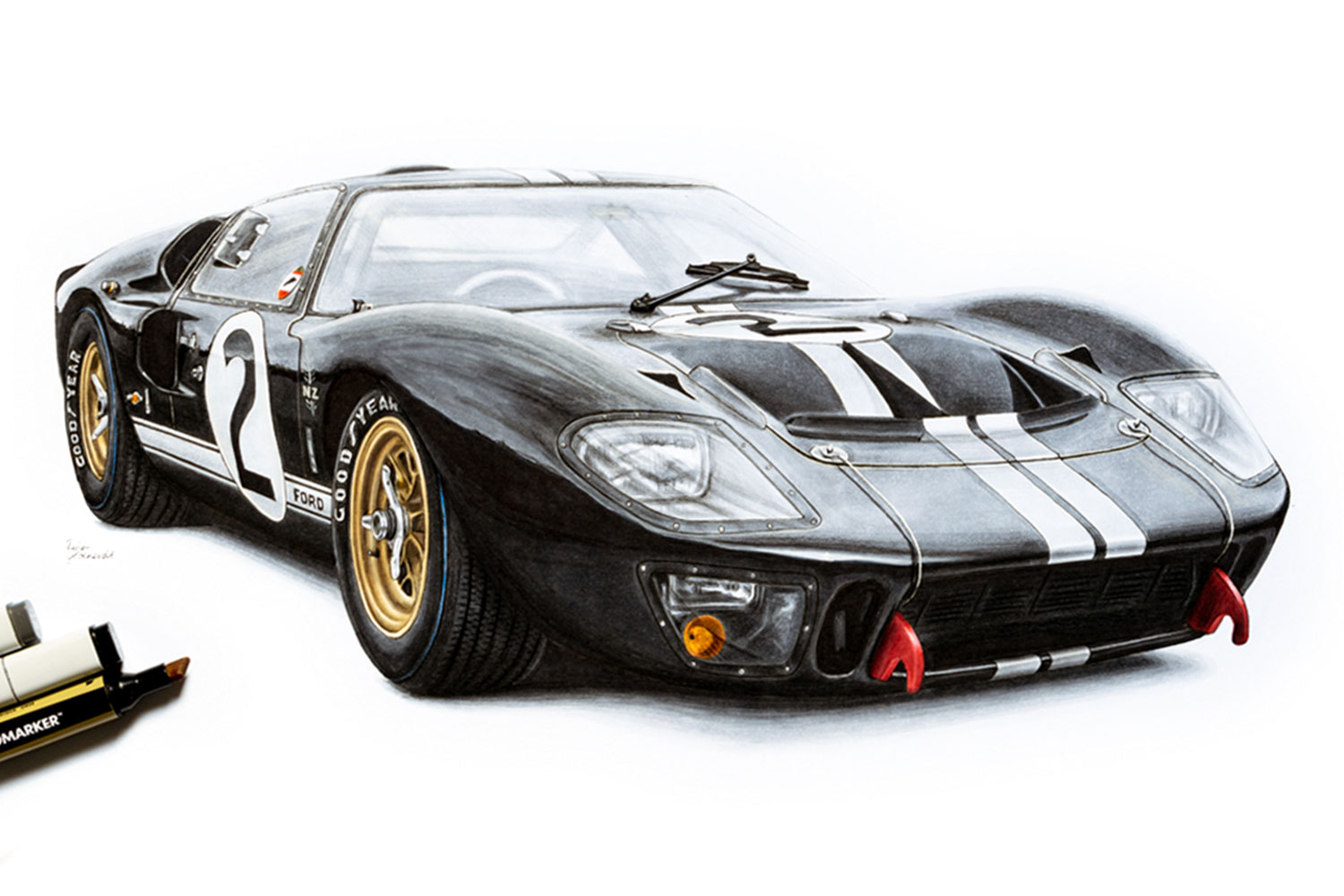 The combination of its night-black livery along with its copper-colored wheels and the contrasting silver stripes manages to bring even more character to the shape of the car and its racing pedigree. Bringing the P/1046 to life is no small task. Such legend is worthy of the most perfectionist attention to detail available. To draw this car is to rekindle its epic tale in motorsport and honor its long road back to glory." 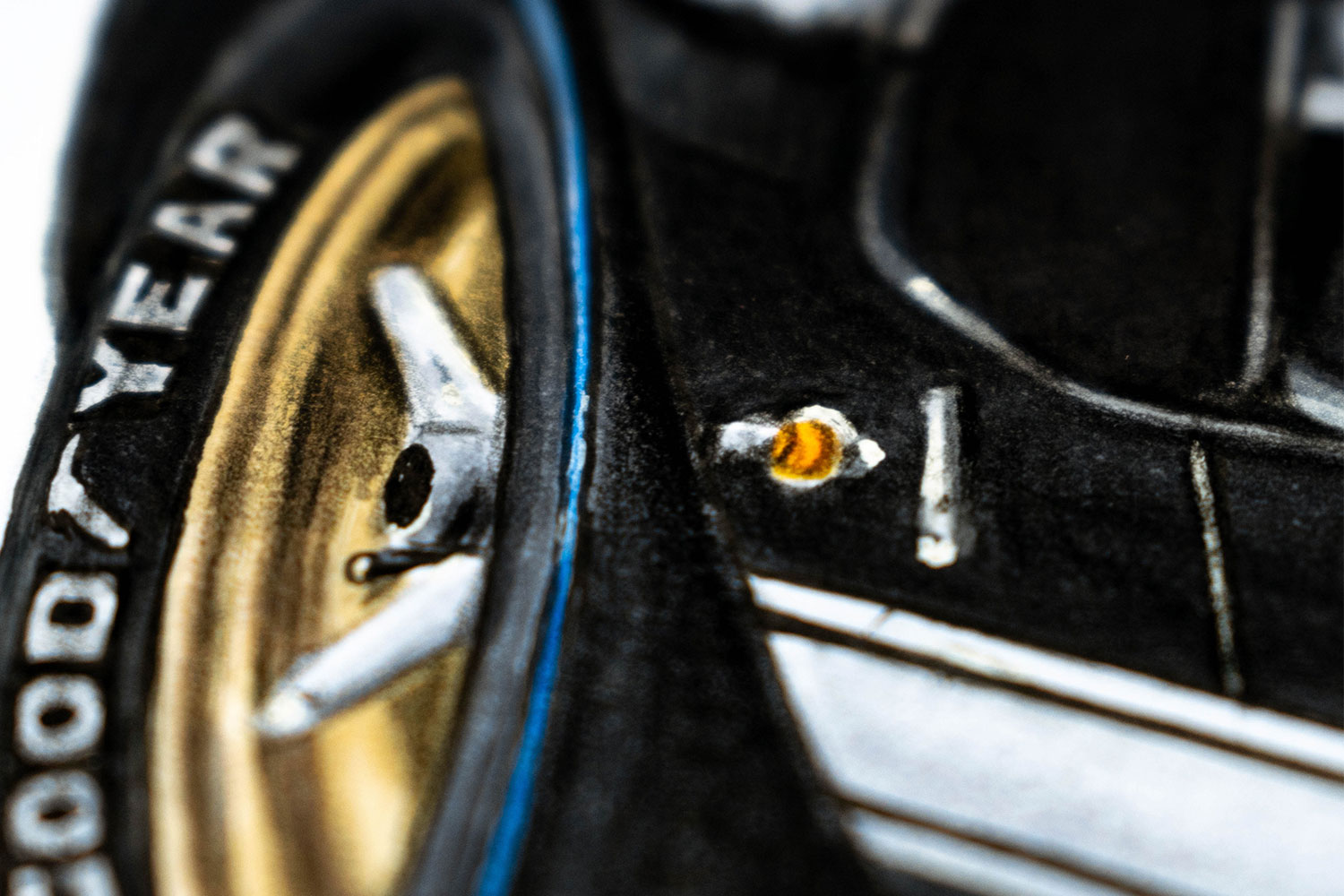 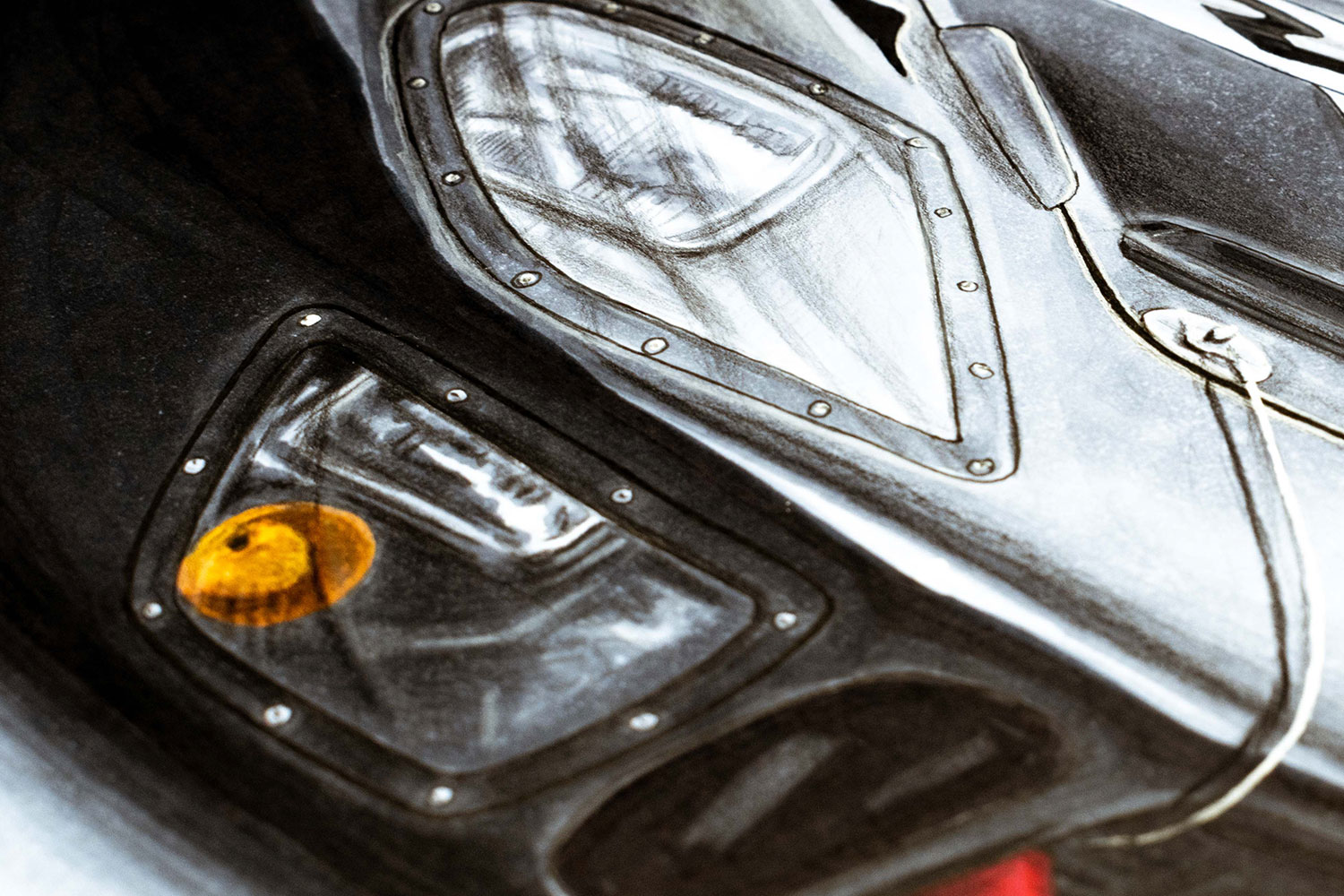 After the retirement of the Ferrari’s, it was about bringing the GT40s home. The No.1 car, chassis P/1015 driven by Ken Miles was leading the race by over 50 seconds before it was told to slow down, as Ford wanted all the GT40s to tie at the end of the race. Although they did not tie, and the P/1015 driven by Ken Miles was the first to cross the line, it was the P/1046 that got crowned victor. The controversial decision was due to the fact that Miles in the P/1015 needed 8 meters of advantage over the P/1046 chassis to be crowned victor, and it had not cleared that distance as the P/1046 started further behind on the grid. Chris Amon, however, gives a much simpler explanation: “at pace, we would have won.” The race ended when the P/1046 slowed down as ordered. It is clear, then, that the rightful champion of Le Mans is, in fact, the P/1046.

- Ruben Groeneveld about the artwork -

“I had the unique opportunity to have a look around Rob Kaufmann’s private collection at RK Motors. The GT40 P/1046 is the crown piece of this collection, which I got to admire while we took pictures of my artwork standing in front of the real car. As you enter the private collection, the car sits right in front of you. Although it may sound like a cliche, I must admit that the car was more impressive in real life than I expected. It is so wide and so low that, although it doesn’t have the advanced aerodynamics of modern race cars, it looked supremely aggressive just sitting on the garage floor. I tried to put myself in the headspace of the legendary drivers that won Le Mans with this car. How must it have been to drive? The cockpit left so little space for the driver and provided no comfort beyond what was absolutely necessary for the drivers to race. The car’s lines really jump out in real life. Each line changes with the point of view you look at them from, which breathes life into the car’s classic livery. Everything in the car was in perfect shape; and by everything, I mean everything down to every nut and bolt that holds it together. 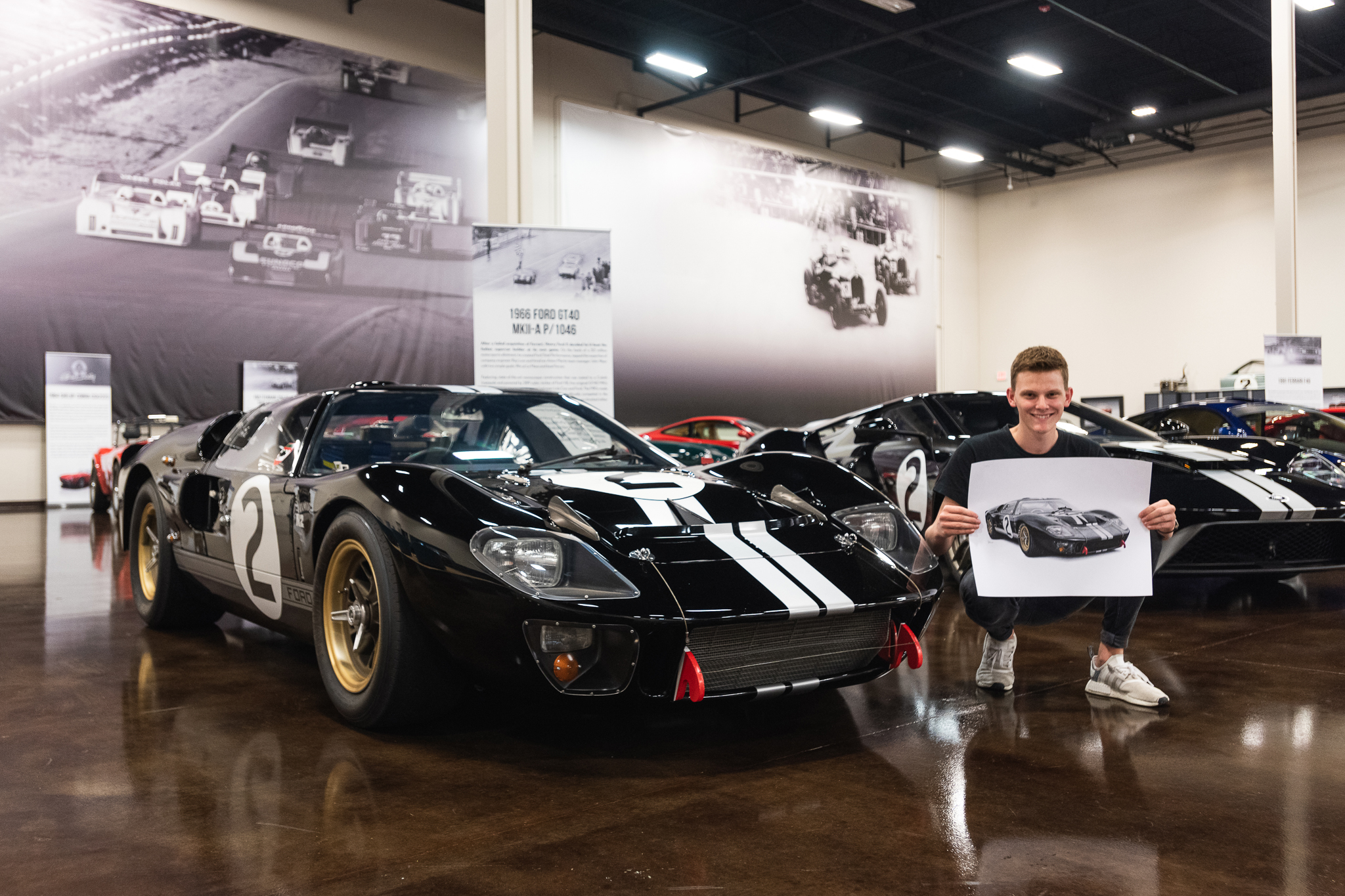 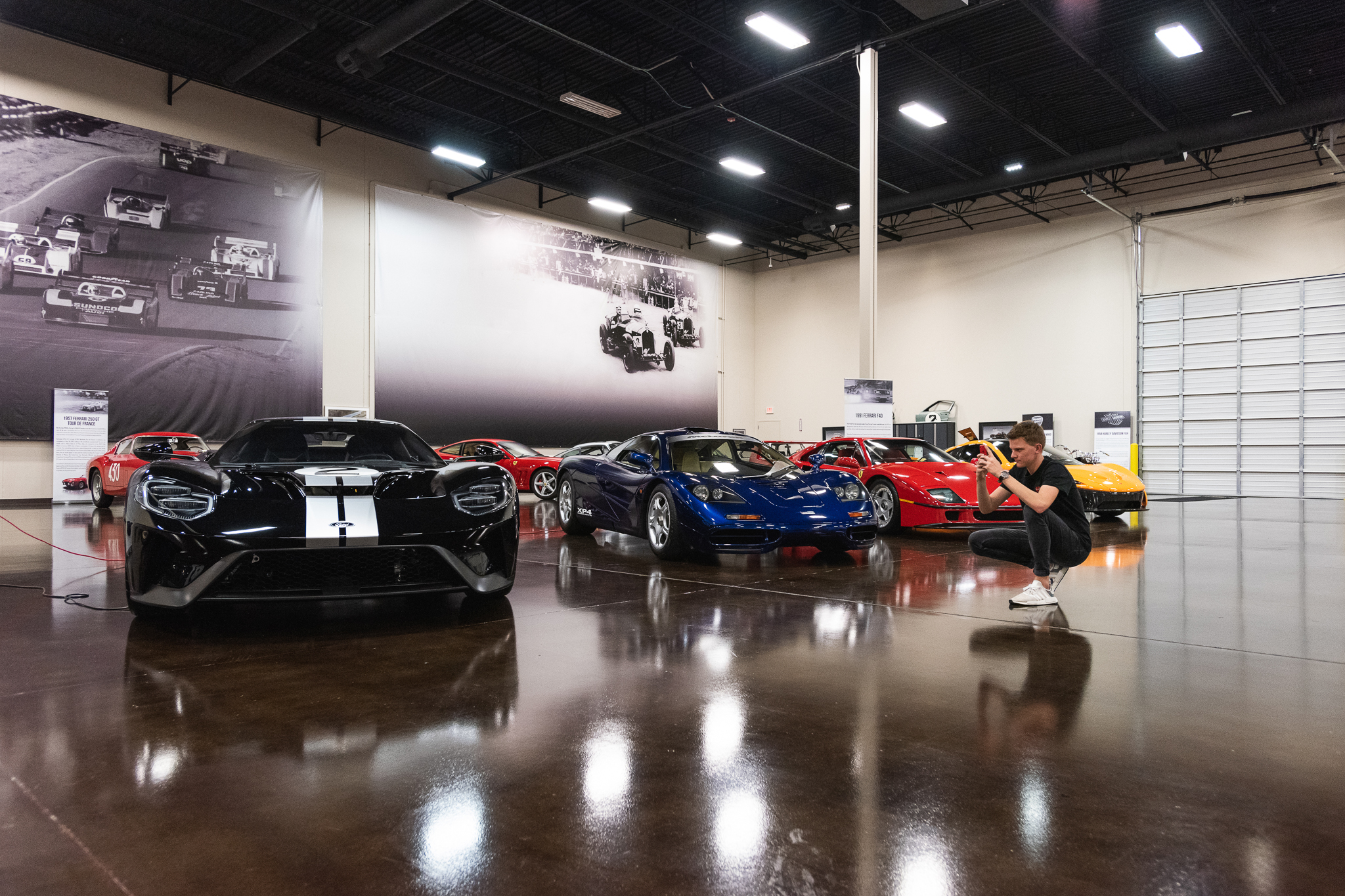 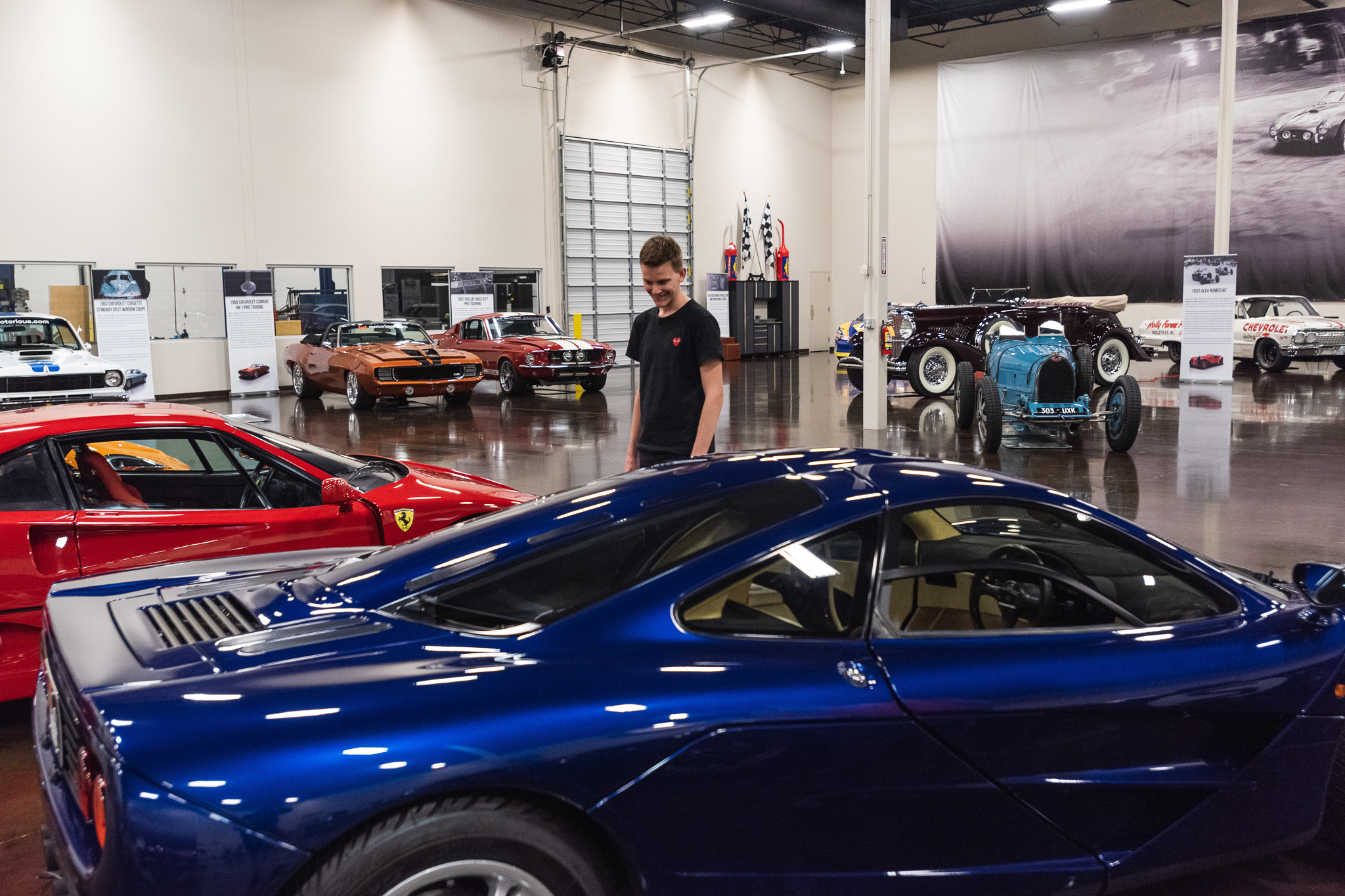 Although experiencing the car made it seem different than what I expected, looking at it from the angle I chose to draw it form gave me confidence in my decision. The lines of the car were singularly recognizable, but they served different purposes at different points in the car. Although the lines were obviously functional, they gave aesthetic personality to the car. This car is Le Mans at its best!”

After a four-year run of interrupted victories, the P/1046 became a test mule, and therefore received multiple changes and a lot of abuse throughout the years. However, for its 50th anniversary of winning at Le Mans, RK Motors Charlotte and Rare Drive restored the car. This was not any restoration, it was brought back to its Le Mans-winning state bolt by bolt, literally. From the uneven exhausts to the drip in the paint, to the suspension set up and the very tire calibration, the car is now preserved in its most glorious state. The chassis won the Concours D’Elegance at Pebble Beach and is planned to be showcased in future events. 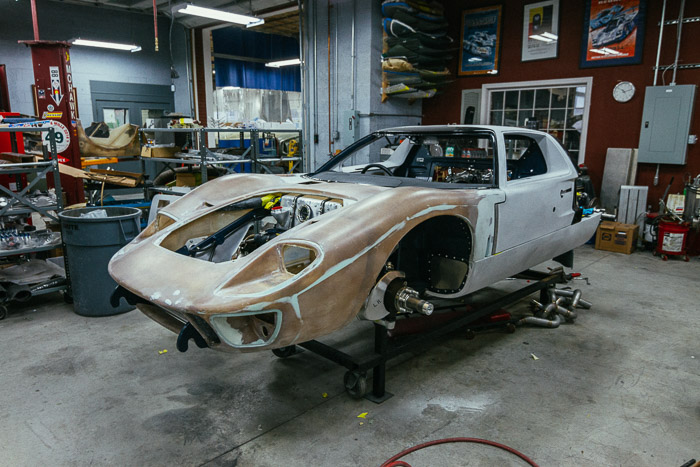 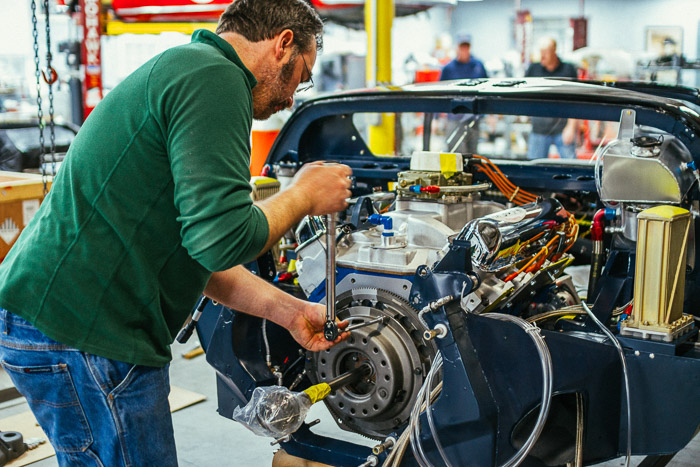 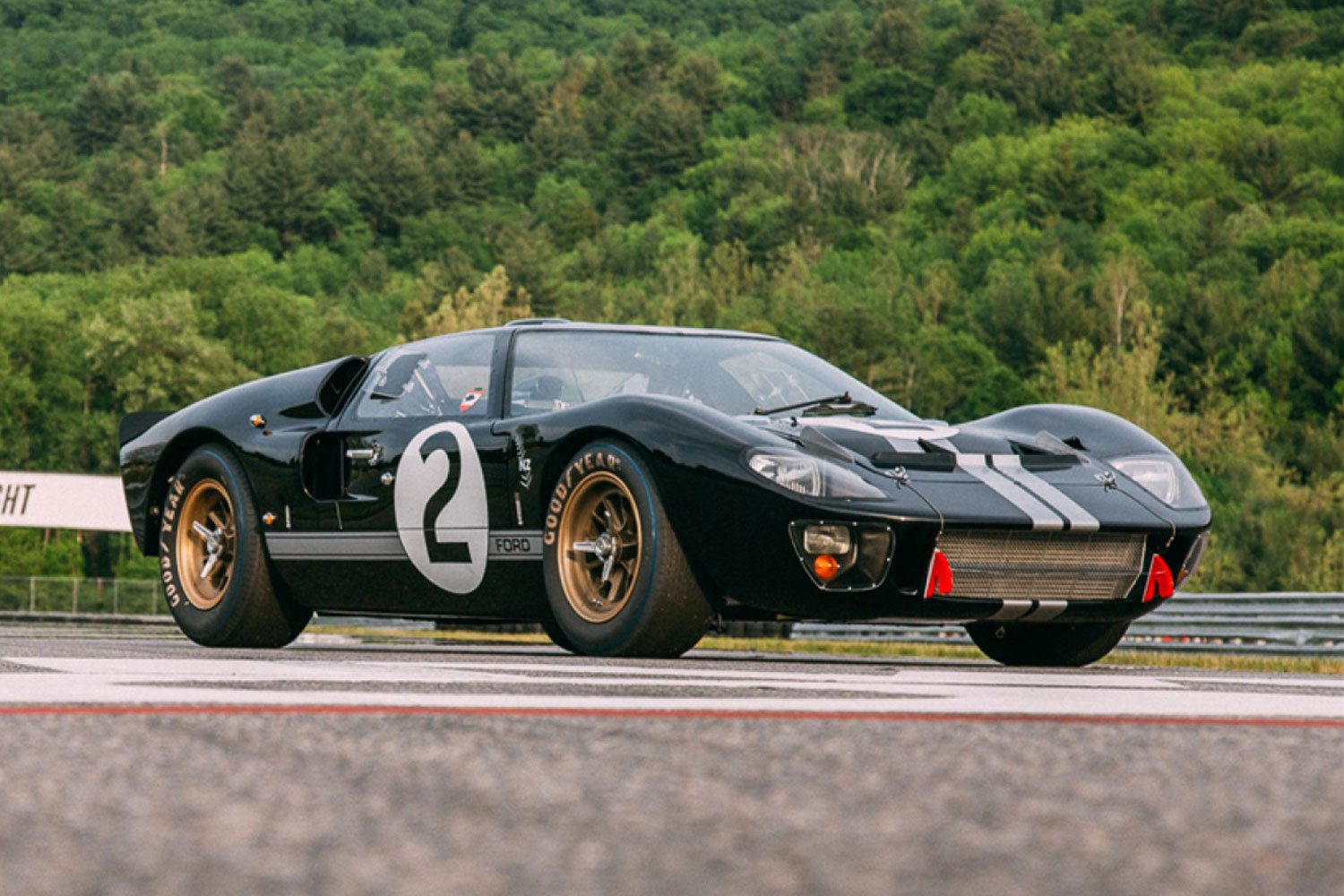 Much like RK Motors Charlotte and Rare Drive, Ruben Groeneveld Art is committed to the most perfectionist attention to detail. The art is carefully drawn, each color carefully picked, and the history and heritage of the car carefully considered. The perfect adornment in a car lover’s house, prints are available in high-quality copies printed on photography paper to maintain every detail. 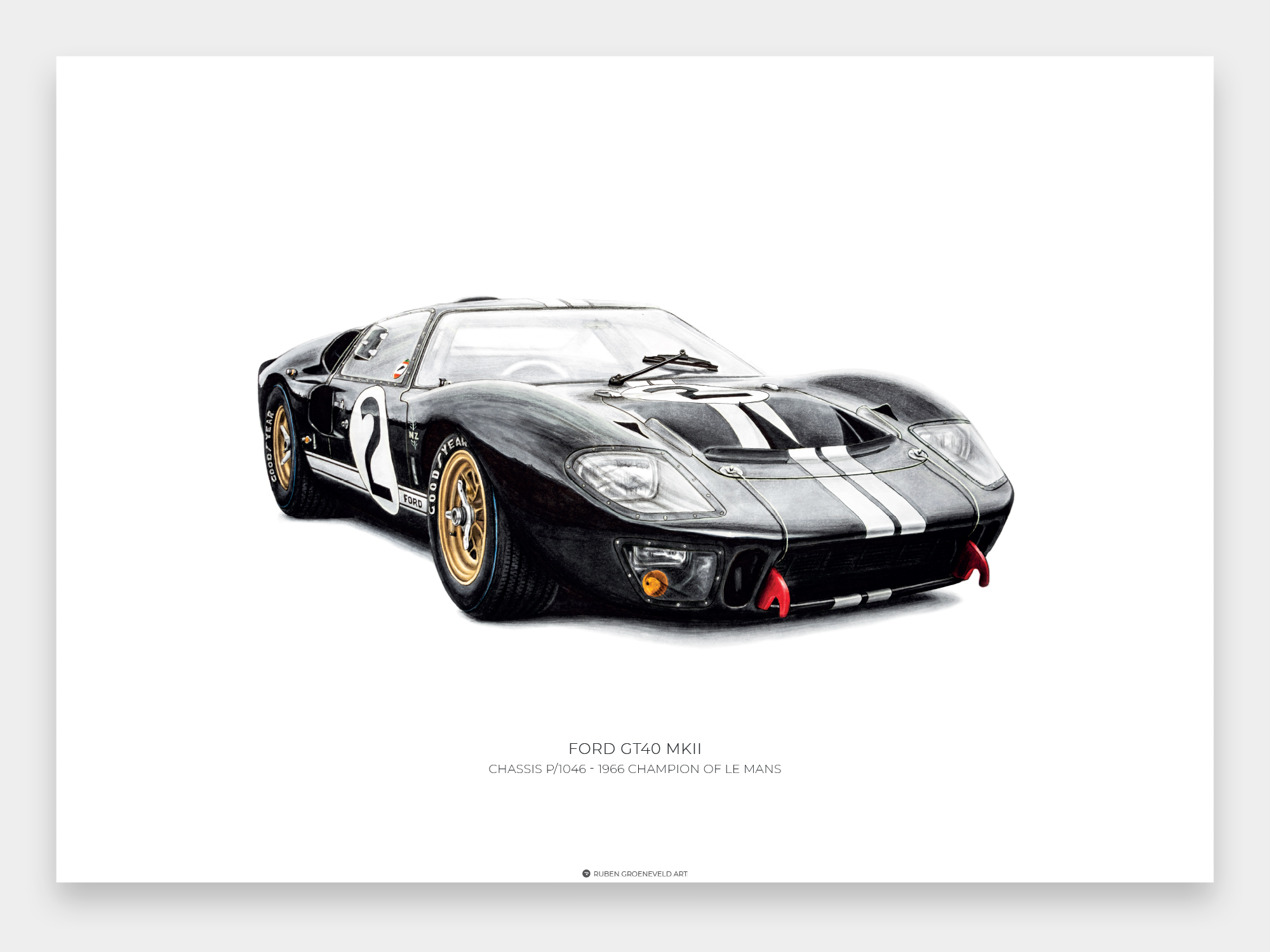 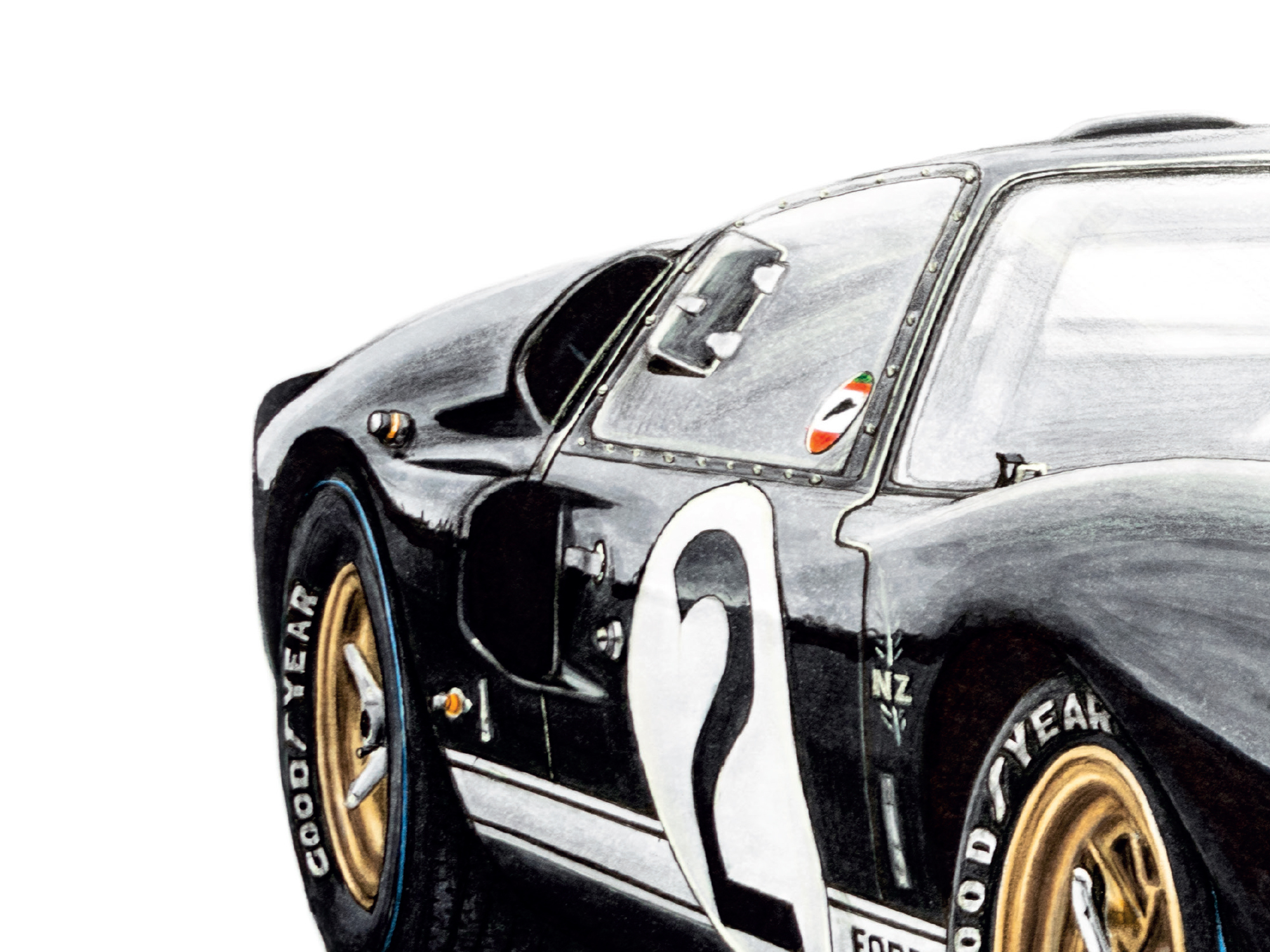 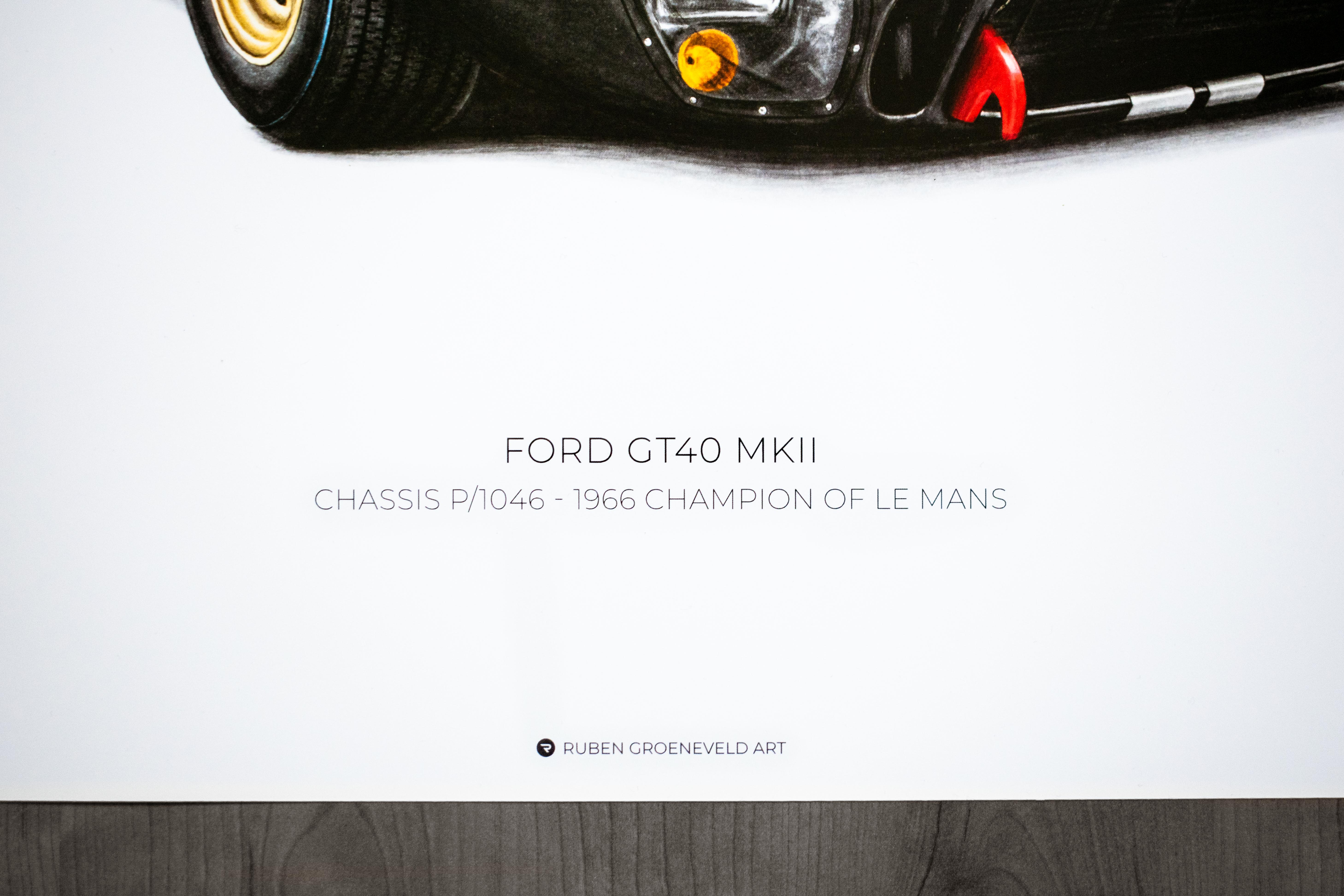 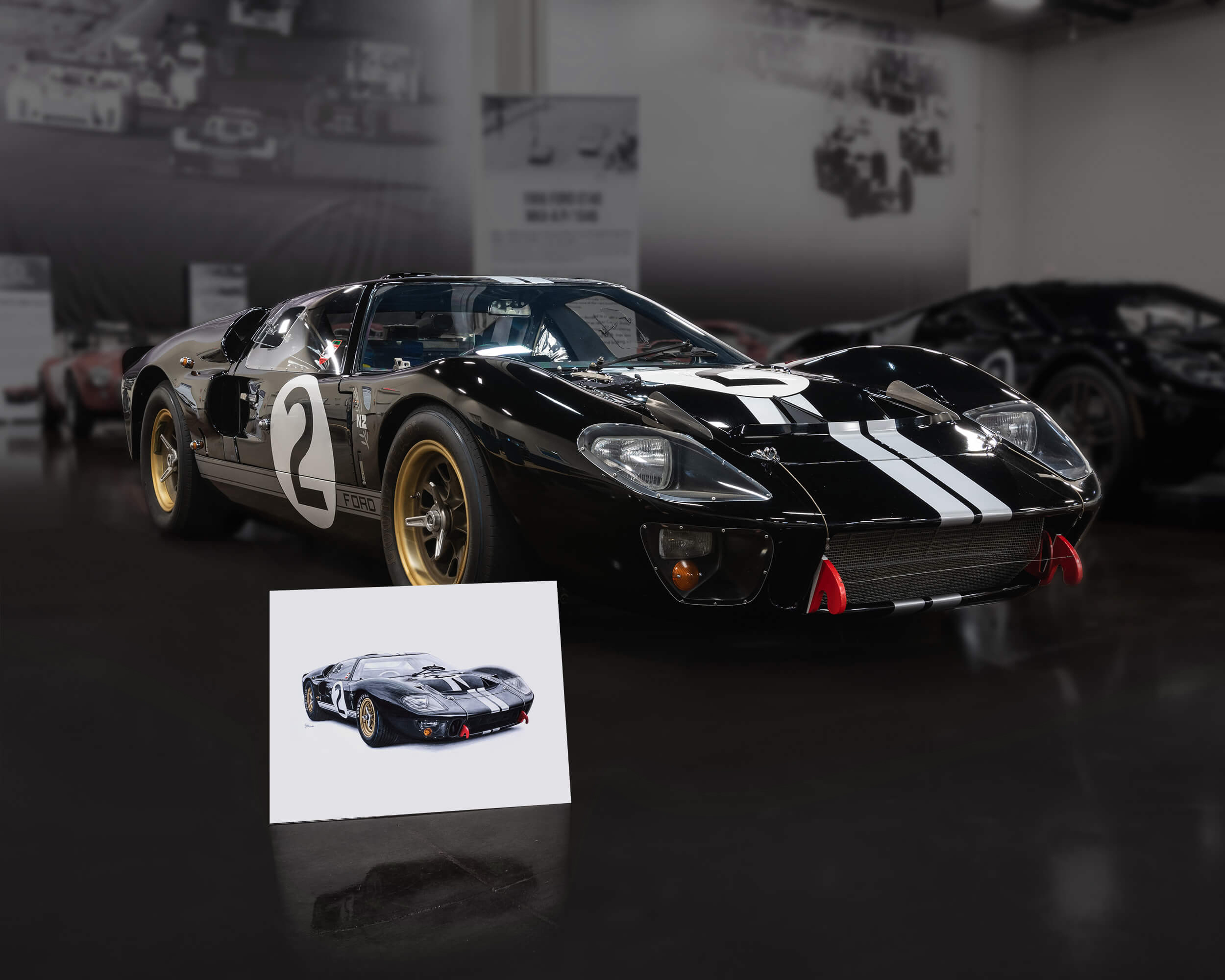