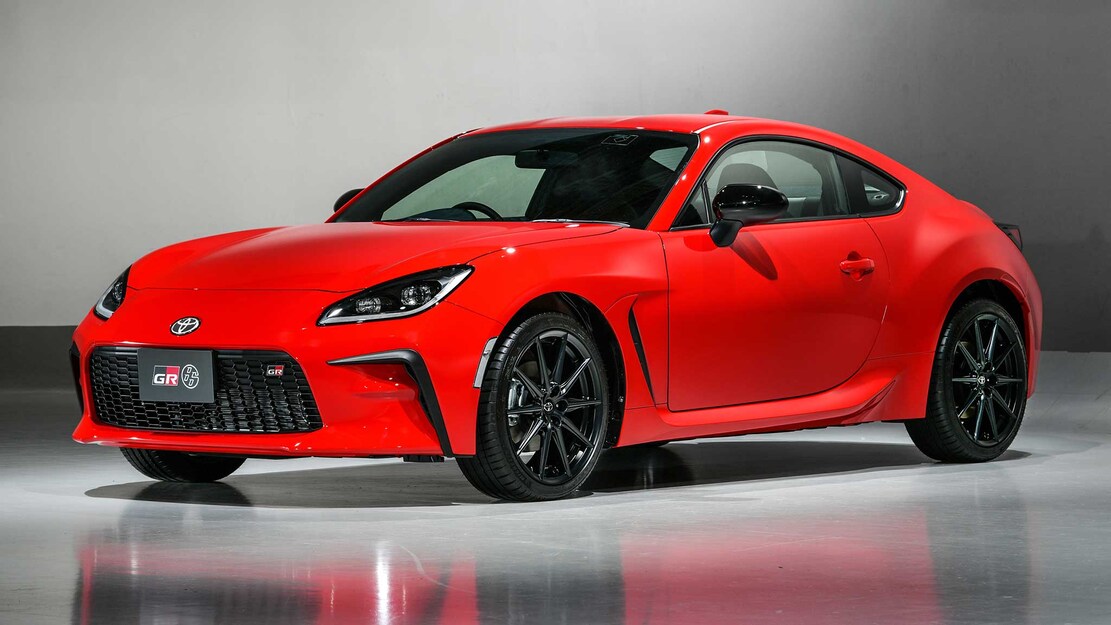 Toyota's affordable sports coupe lives for a second generation alongside its Subaru twin.

Ever since the new Subaru BRZ broke cover late last year we've been waiting for its Toyota-badged twin, the 86, to do the same. After months of waiting, it's finally here, though it officially bears the name GR 86. In Toyota speak, GR stands for Gazoo Racing, the Japanese company's factory racing arm. It's also the same two-letter identifier ascribed on the rump of the new Supra sports car and the rally homologation special GR Yaris that sadly isn't sold here.

New name aside, the GR 86 copies the recipe for Toyota's former 86, a rear-wheel-drive 2+2 coupe—meaning it is once again mechanically identical to the Subaru BRZ. That both affordable sports cars lived to see a second-generation and keep doing battle with the likes of Mazda's MX-5 Miata and, somewhat tangentially, the soon-to-be-replaced Nissan 370Z marks a pleasant surprise. It shows the value in two automakers (in this case, Toyota and Subaru) collaborating on low-volume but incredibly fun cars, sharing the development costs and making the project pencil financially. It's the reason the GR Supra exists, having been co-developed with BMW (the project also birthed the latest Z4 roadster). 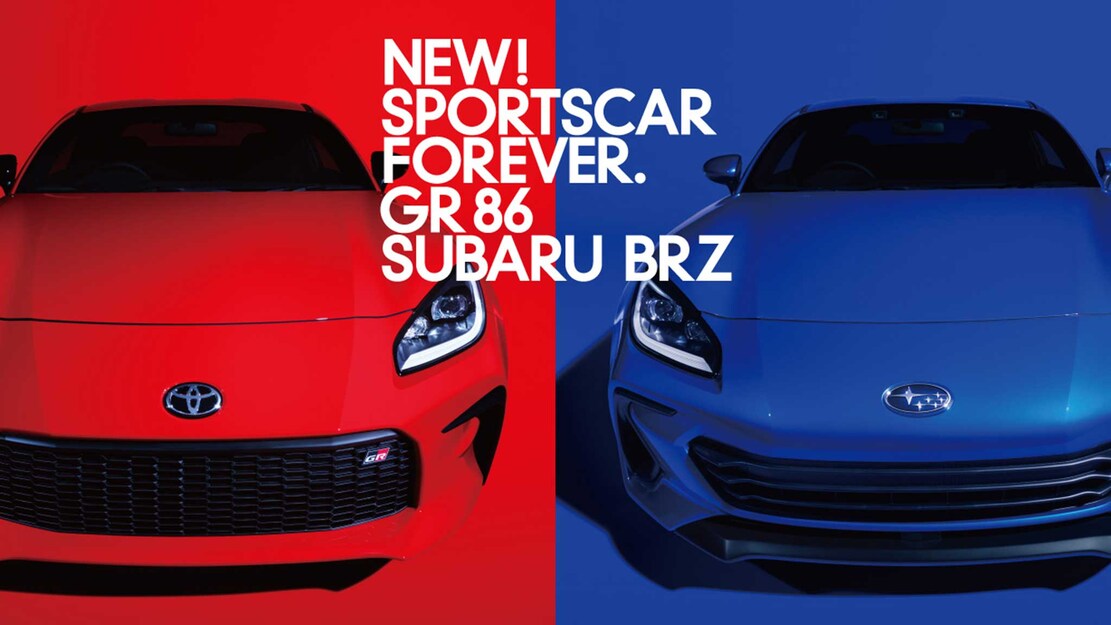 If you're familiar with the newest Subaru BRZ's particulars, then you already know what's going on under the GR 86's new duds. The last-generation model's 2.0-liter flat-four engine has been enlarged to 2.4 liters (just as it has in the new BRZ), and while Toyota isn't talking power and torque outputs just yet, we can offer an educated guess: Both outputs will grow. Expect peak hp and torque figures to mirror the new BRZ's 228 hp and 184 lb-ft—gains of 23 horses and 28 lb-ft of twist, respectively.

Both six-speed manual and six-speed automatic transmissions will be offered. You know which one we'd suggest buying—hint, it's the one with a third pedal—though automatic-transmission models will include Subaru's camera-based EyeSight suite of active safety features. Toyota says the bigger engine (and its yet-unspecified power) will be more responsive and quicken the car's estimated zero-to-62 mph time from 7.4 seconds to 6.3. That's quite the jump. 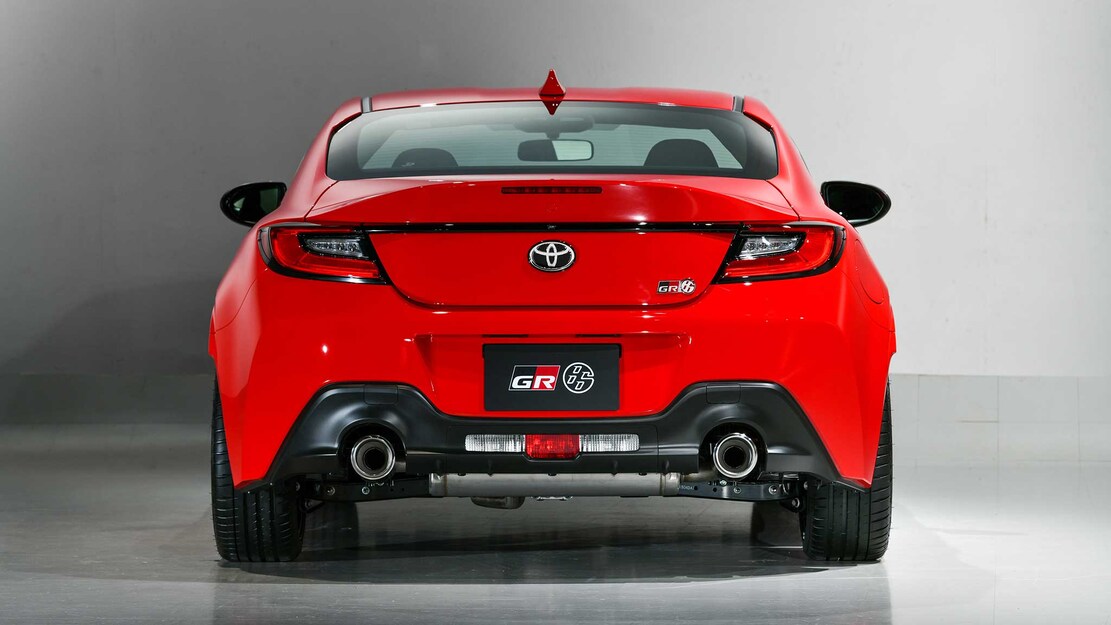 Because the GR 86 continues to use a flat-four engine, which lays the cylinders down flat rather than vertically as in the far more common inline-four format, its hood stays very low. Dimensionally, the new Toyota is nearly the same size as the old 86; the claimed 2,800-pound curb weight, too, is right on the money. A 2017 Toyota 86 860 Edition we tested weighed in at 2,785 pounds. Happily, the new GR 86 maintains the previous model's front-engine, rear-drive proportions, with a long hood, tight greenhouse, and stubby rear deck. Only minor changes were made to the 86's front end relative to its BRZ sibling.

In a bid to drag the sports car's center of gravity closer to the pavement, the GR 86's roof and fender panels are now made from aluminum, and unspecified revisions to the seats and mufflers help, too. Overall, torsional rigidity is up by "approximately" 50 percent, a potential boon to the rear-drive car's handling and ride comfort; a more solid base for the suspension to mount to can allow engineers to fine-tune responsiveness and bump absorption with fewer compromises. Remember, big power was never the 86's game—sweet handling and a wonderfully balanced chassis were, and we expect more of the same from the new car, especially following a recent ride in the new Subaru BRZ. 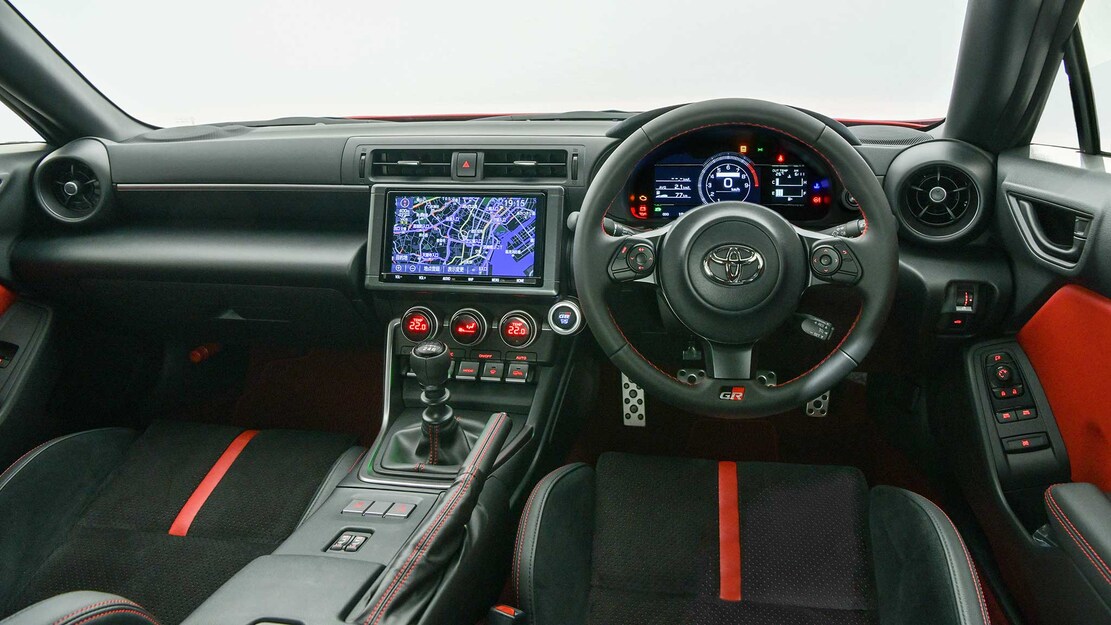 As for the more boring bits, you know, the stuff that doesn't have much to do with clipping apexes, drifting, or nailing the perfect heel-toe downshift. The GR 86 boasts a reworked interior that is much nicer than before. There is a 7.0-inch TFT display in the instrument cluster and a more horizontally-themed dashboard; the former even boasts a startup sequence that echoes the engine's horizontally opposed cylinders.

Toyota isn't talking price yet, but we expect the GR 86 to once again start near the $30,000 mark when it finally hits dealerships later this year. Look for more U.S.-specific details to emerge closer to that on-sale date, too.