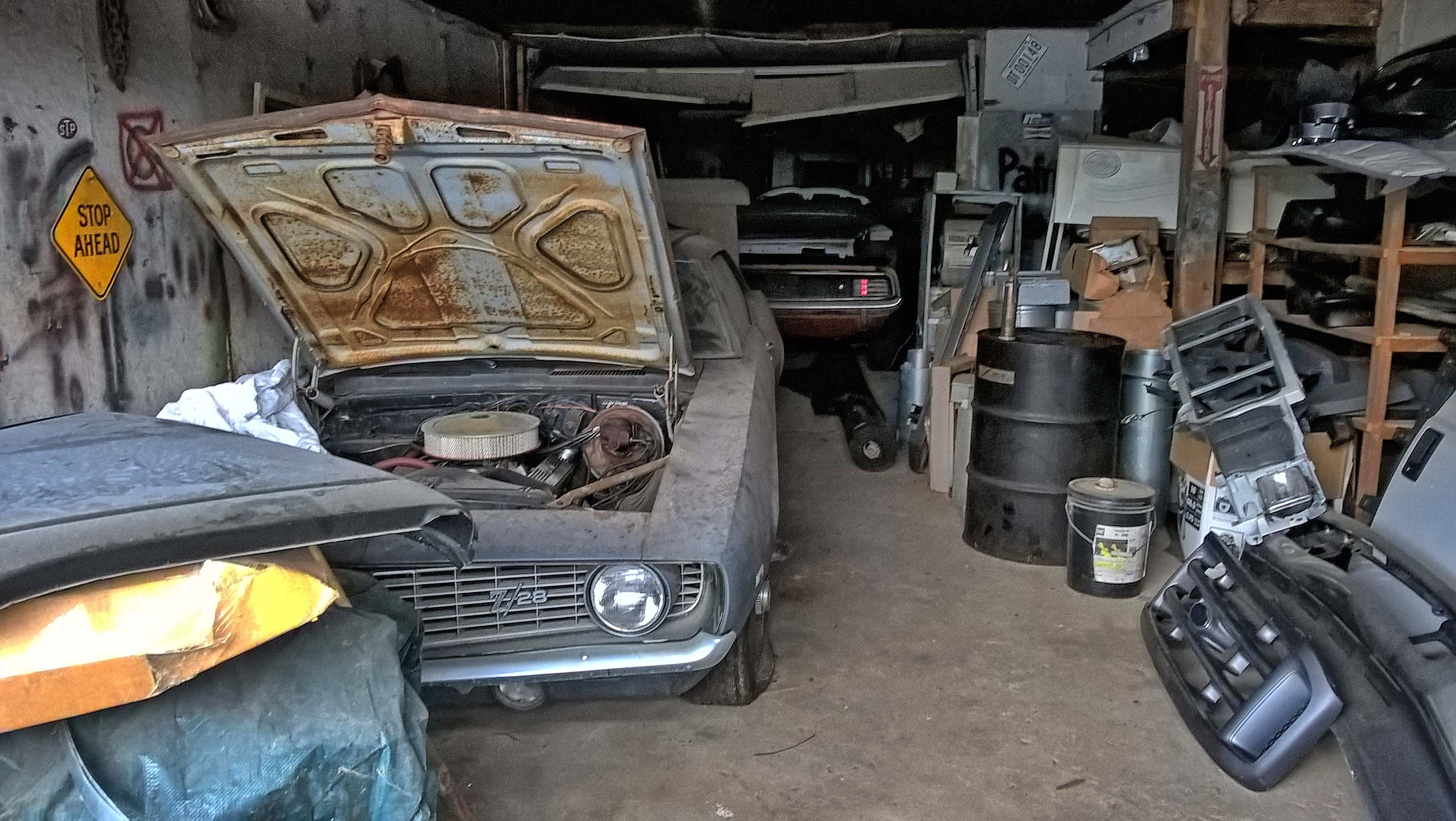 Matt was driving to Pittsburgh with his father and Frank to look at a 7,000-mile, original paint, 1969 Hemi Road Runner, an old race car with no motor or transmission. “My dad was in the back seat reading the local trader paper. He said to me, ‘Hey Matt, what’s an X33 Camaro?’”

Matt describes himself as a “diehard when I come on a good car.” He was very enthusiastic to make a new appointment for the Road Runner later and head out for parts unknown in the dark of night. The Z/28 interested him more, but the seller said getting there that night, so late, wasn’t necessary, as the car was parked in a barn with no electricity and therefore no lights.

Matt asked many questions about the Camaro, which he determined was complete, a project car, and just what he wanted.

Finally, he hung up and got back on the road to Pittsburgh. A few minutes later, Z/28 fever hit him again and he pulled his truck off the side of the road and made a second call.

“I said, ‘I know you gave me your word that I could be the first one on this car, but look, I have lost cars like this before. Somebody comes and pulls the rug out from under my feet.’”

There was still no doing the deal that night; the seller was adamant. Matt, his dad, and Frank drove on to Pittsburgh to look at the Hemi Road Runner.

Matt didn’t make a deal on the Plymouth, but the next morning he and Frank, a little sleepy-eyed, were waiting in the driveway of the Z/28’s owner.

Matt says, “He walked us over to the barn.” Matt cupped his hands against the glass windows and looked inside to see the Z/28 parked up against the door.

When the barn door swung open, taillights to a Plymouth muscle car, parked behind the Camaro, caught Matt’s eye.

The seller nodded toward the Z/28 and replied, “As soon as this car sells, that car’s for sale, too.”

Matt had ideas. He knew somebody that might be interested in purchasing the Plymouth. He wanted the Z/28.

The Camaro was “all there, except no smog,” and was “very complete.” The body was in primer, but the original color was Fathom Green. Matt’s enthusiasm skyrocketed as he circled what appeared to be a very solid project Z/28, just perfect for a restoration.

“Yep, original motor, original transmission, original rearend, the five wheels, distributor, carburetor, heads . . . ” Every part was checking out, even the radiator was original. The original shocks were still on the car. This wasn’t Matt’s first rodeo, so to speak. He had restored first-generation Camaros before. Matt kept checking the parts and was elated to find the original suspension, ball joints, tie-rod ends. The body was straight but had what he calls “typical Pennsylvania rust,” including “small floor issues, but nothing big.” The rust was mainly confined to quarter-panels and fenders.

The AAR had about the same Pennsylvania rust issues and was the same color combination, green on green. Matt checked the VIN to verify the car came from the factory as an AAR. The “Trans Am” tag was still on the fender apron under the hood.

The AAR wore its original staggered wheels. Inside, Matt found the original Pistol Grip shifter for the stock transmission, but under the hood was a “318 smogger.” The seller showed him the original engine, minus valve covers, but with the three two barrel carburetors on the original intake from the 340. The centersection for the original rearend was in a 5-gallon bucket.

Matt believes a past owner changed the motor and axle ratio to make the car more drivable on the street, maybe back in the gas crunch of the 1970s.

Somebody had changed the doors, which were red but in really good condition. They also changed a front fender and the trunk lid.

Matt put a deal together to purchase both cars, then sold the AAR ’Cuda, mitigating his investment in the Camaro. The owner refused to negotiate the price on the Z/28 because he said his phone “rang off the hook,” and he had a list of potential buyers in line to look at the car.

Moving fast on the Z was probably a very good idea. Barczak wasted no time starting a ground-up rotisserie restoration. 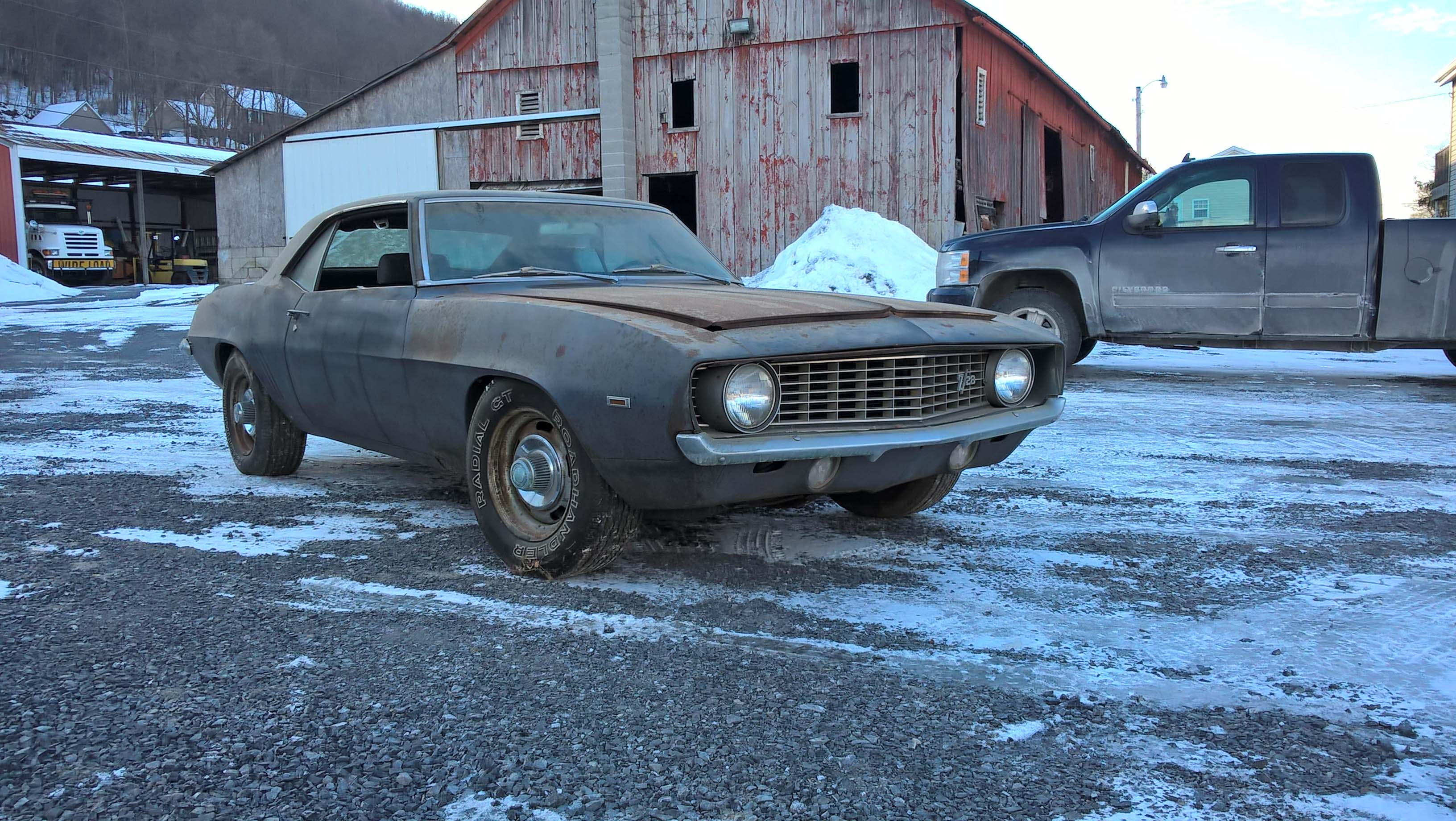 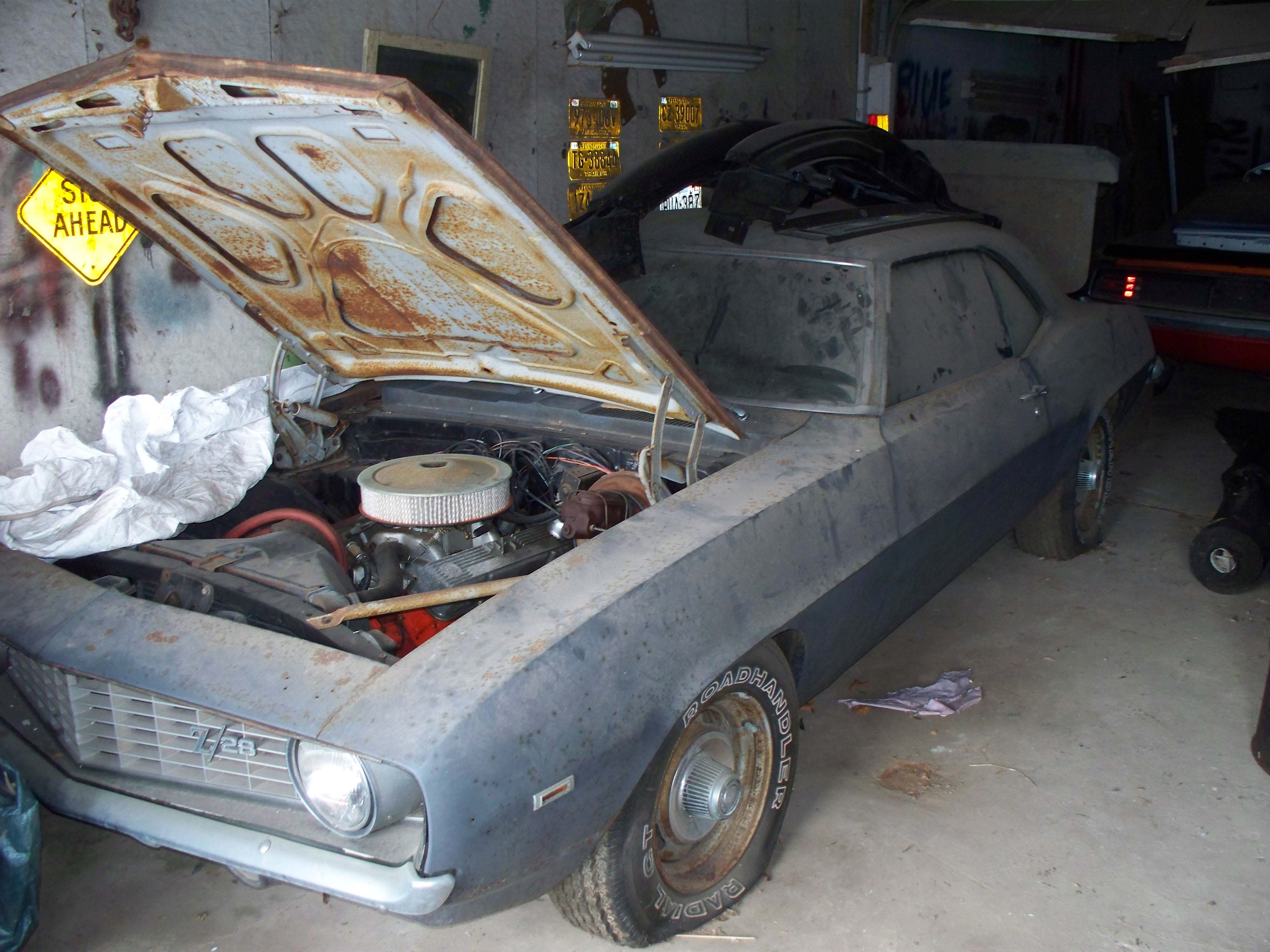 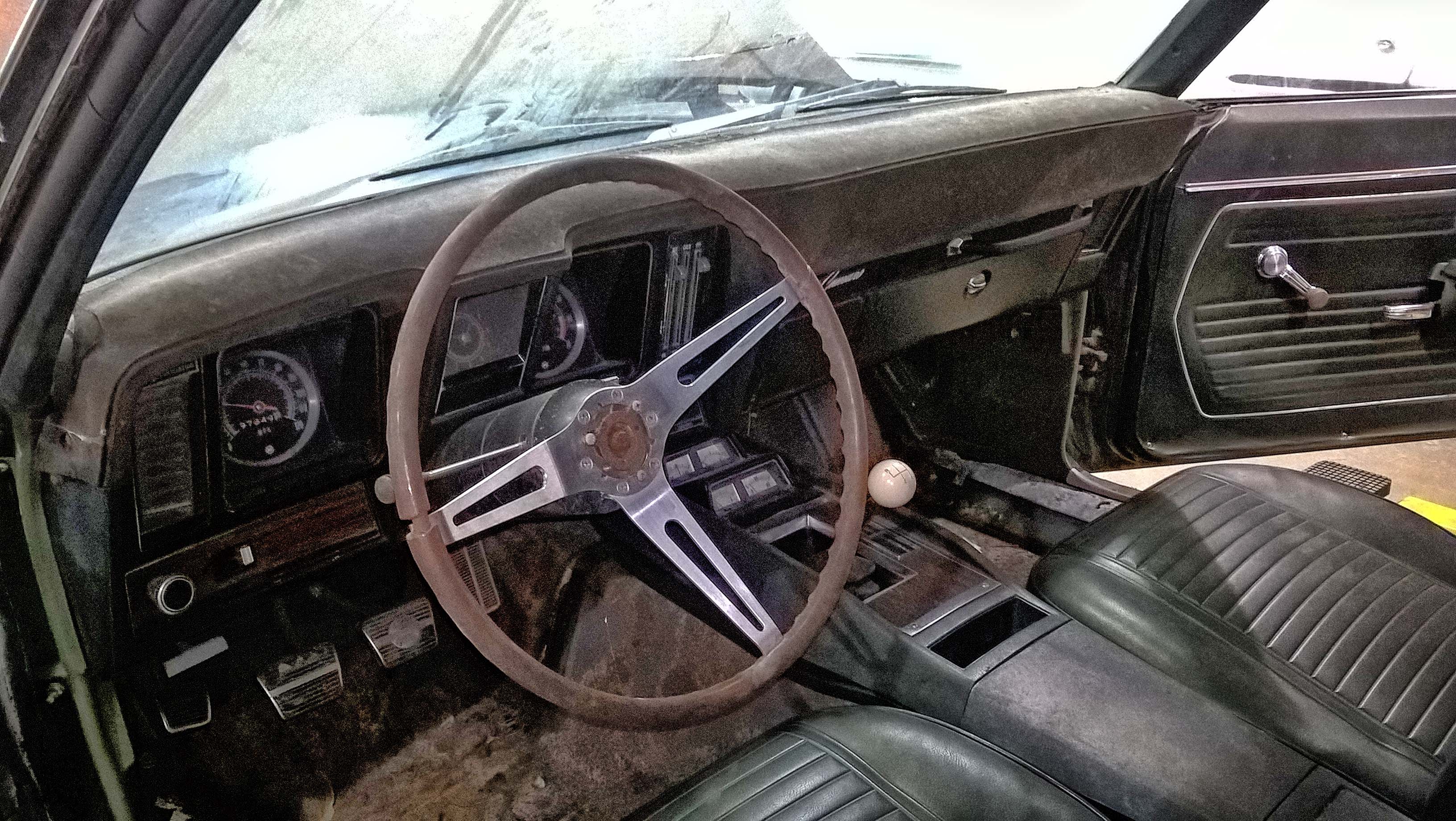 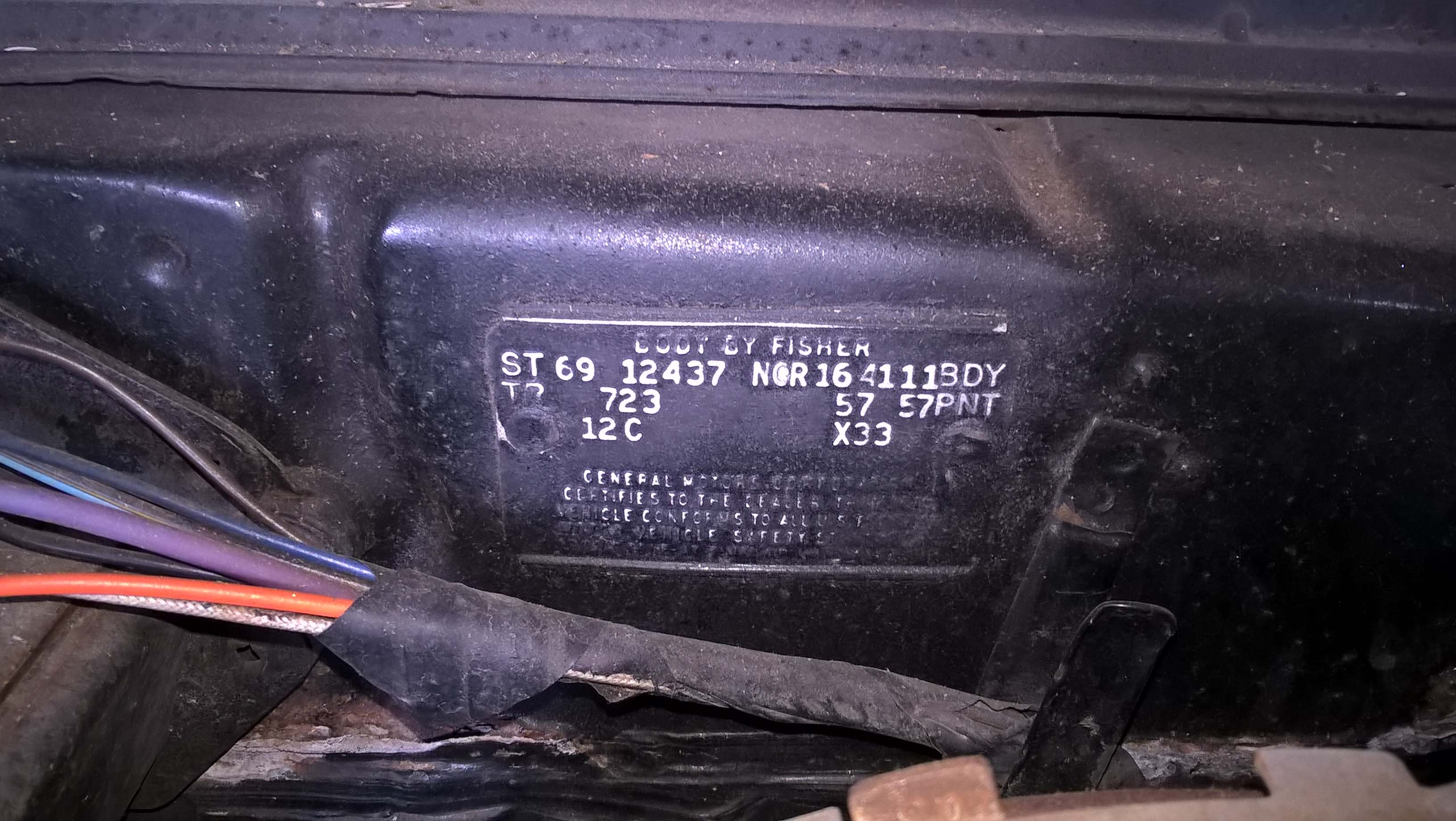 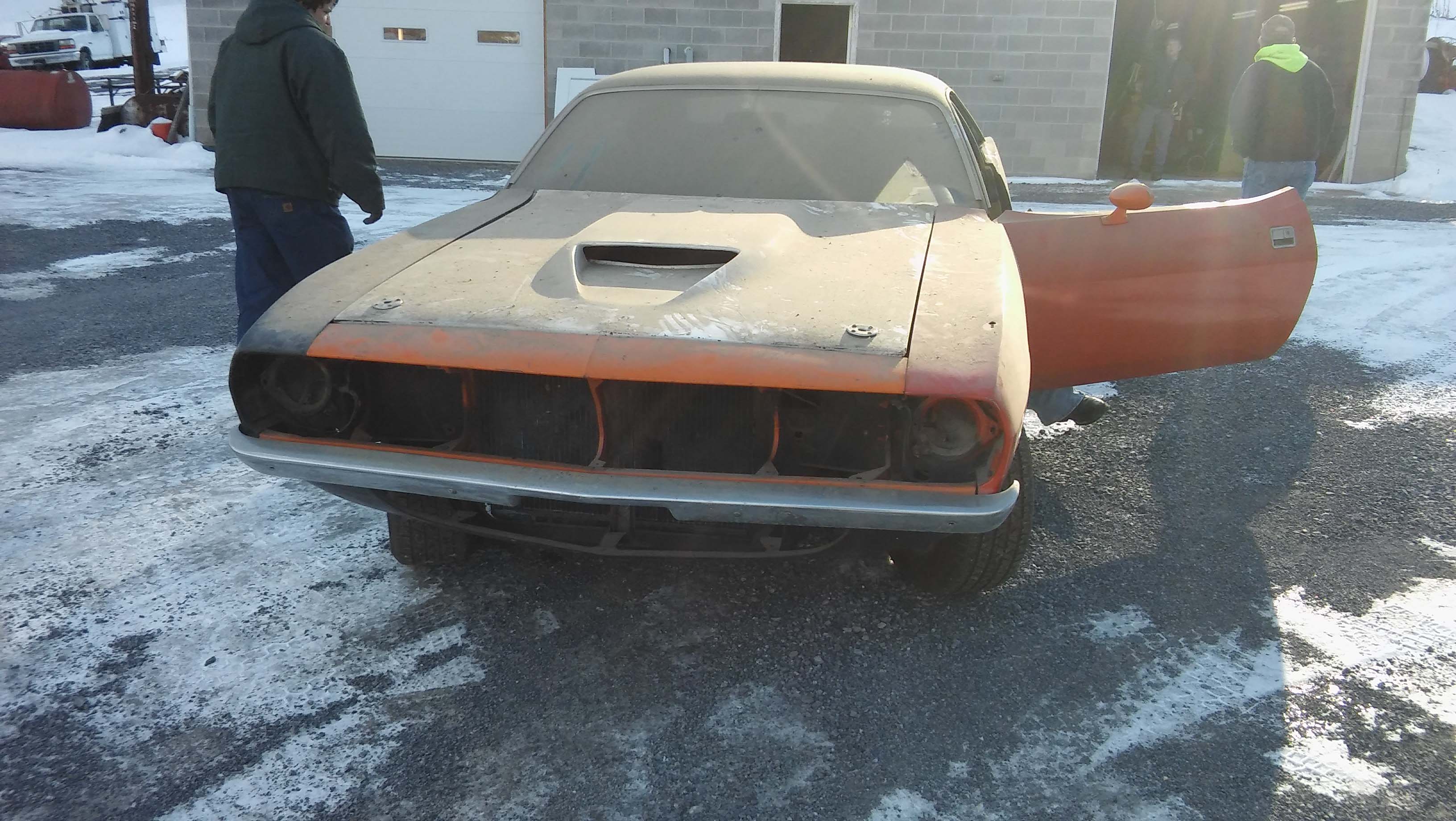 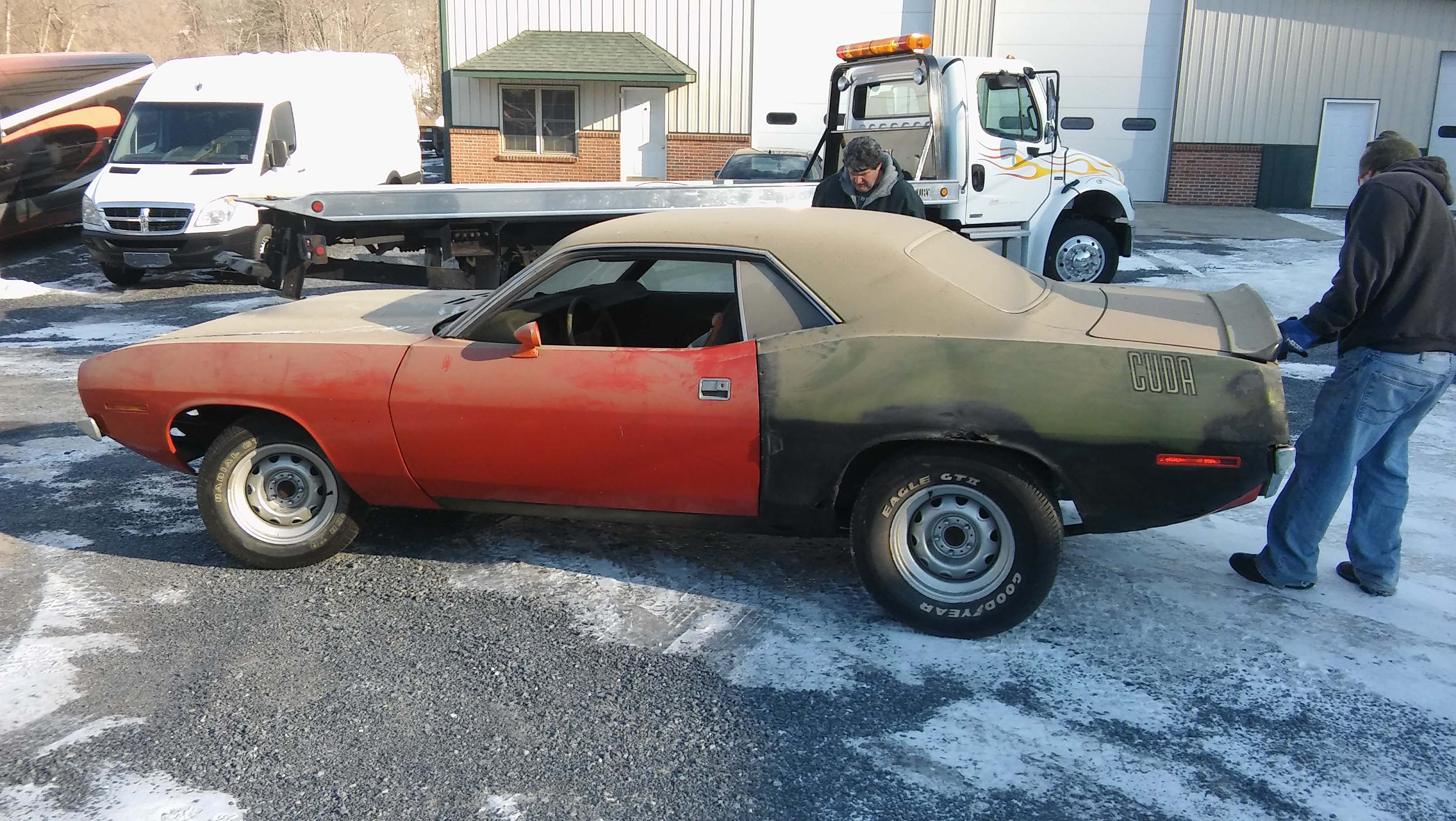 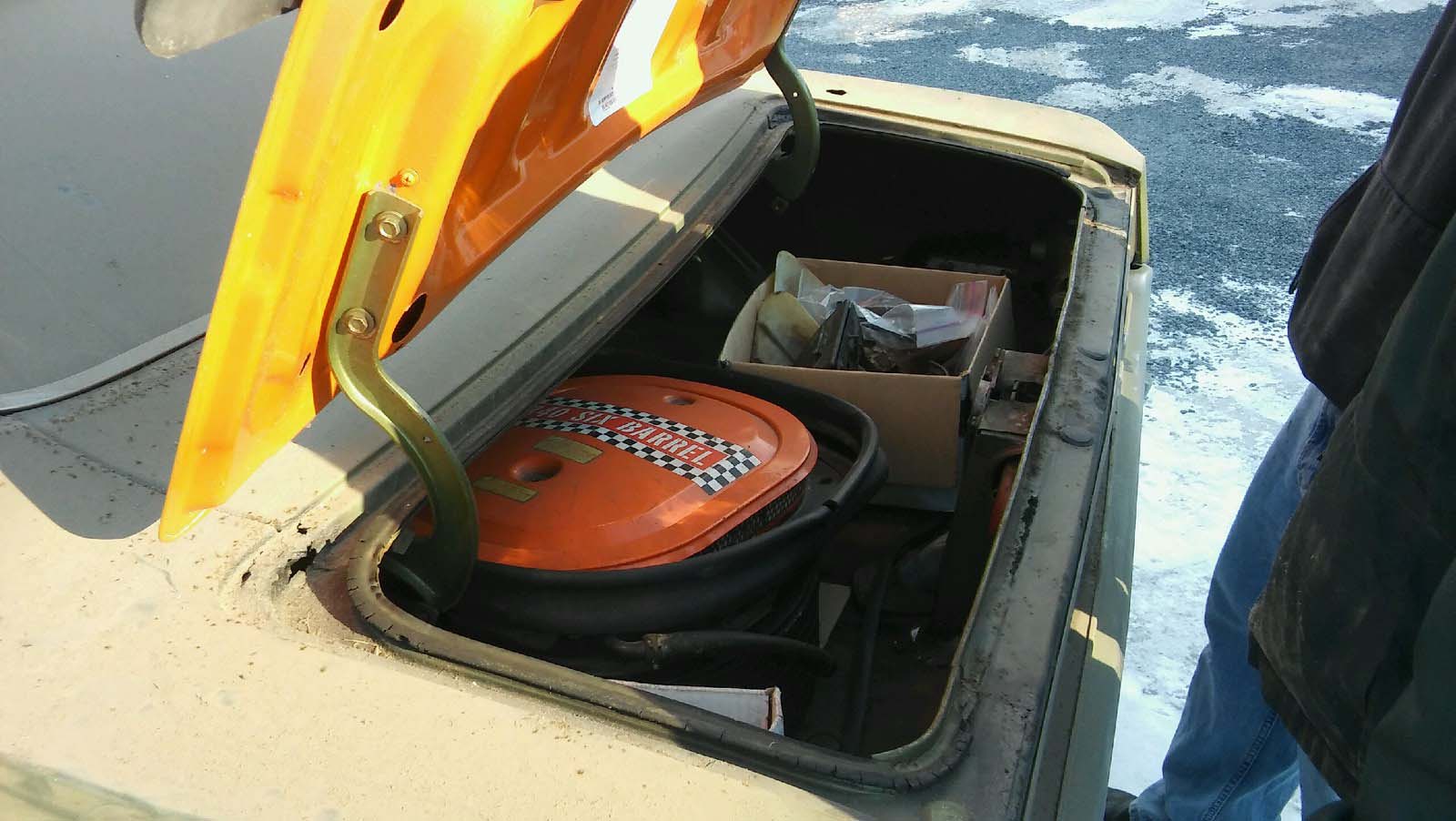 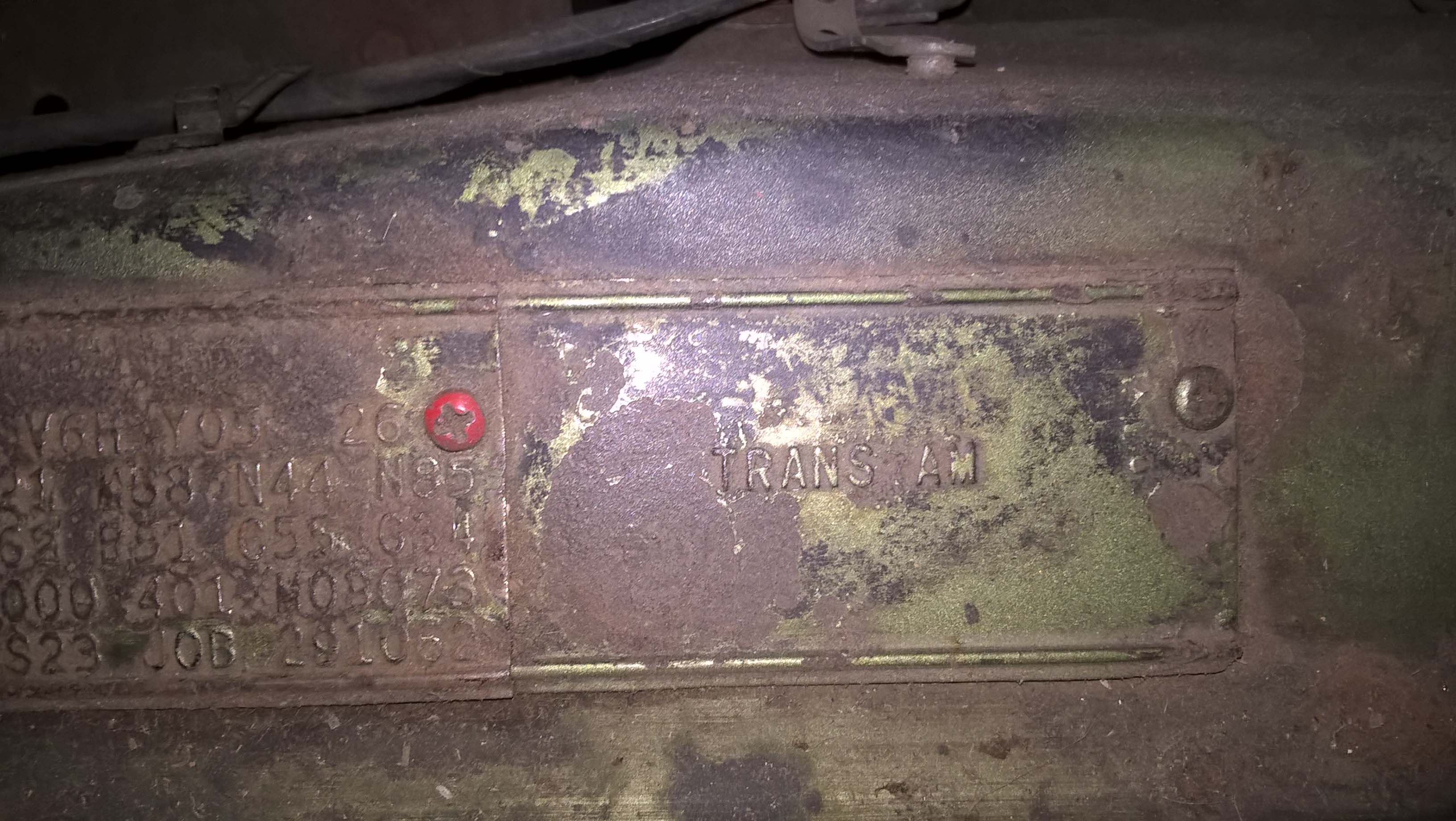 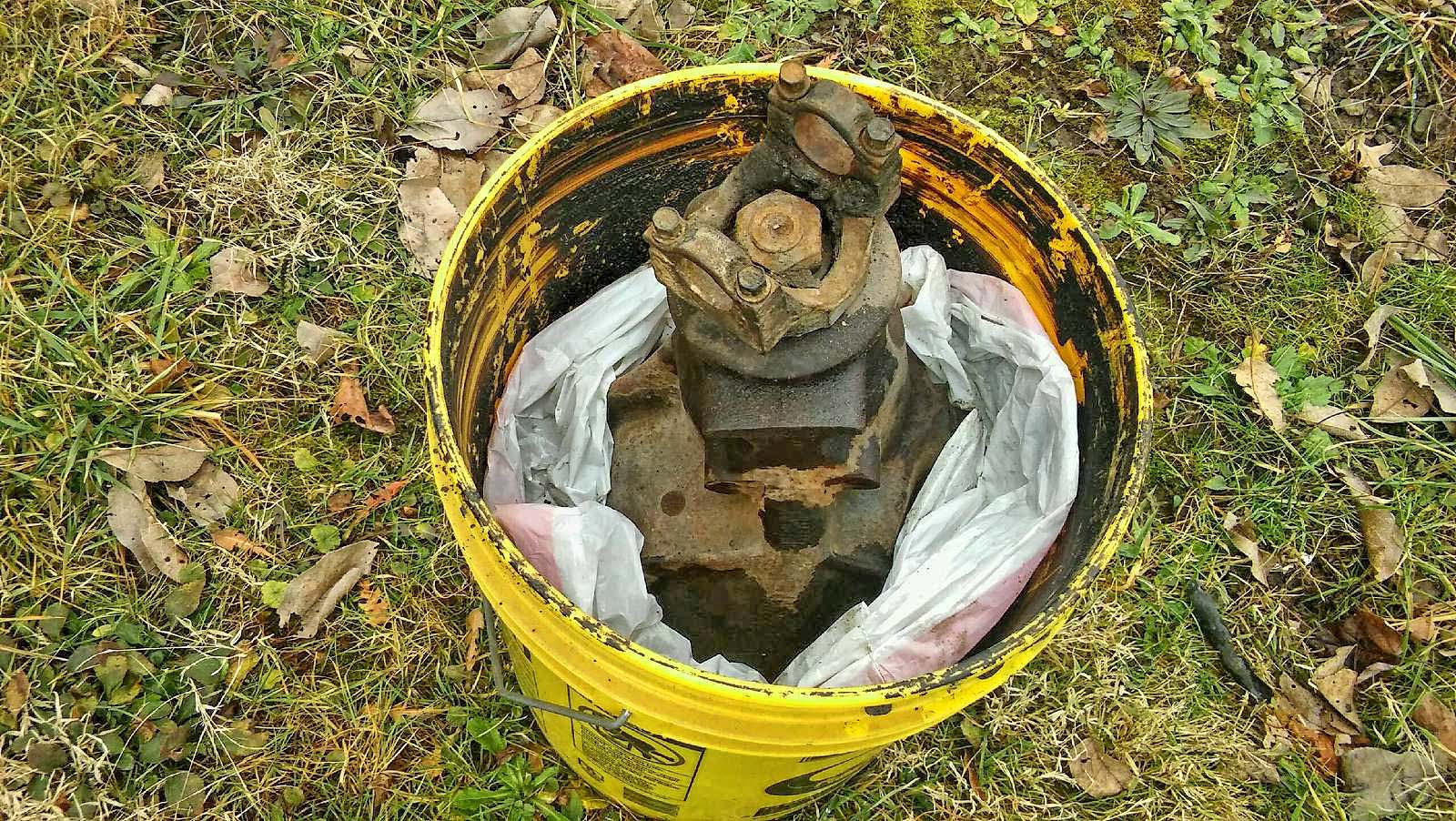 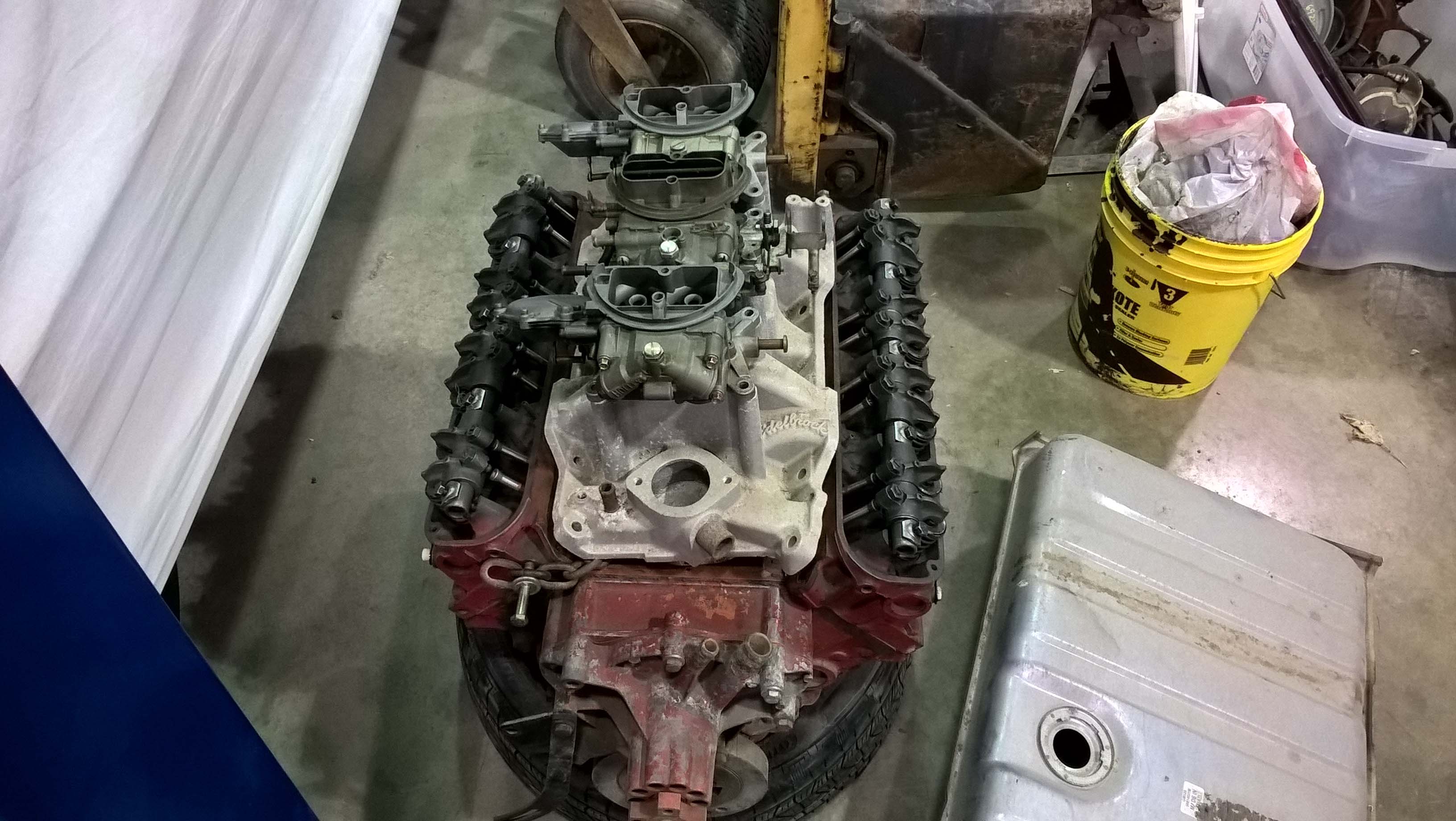 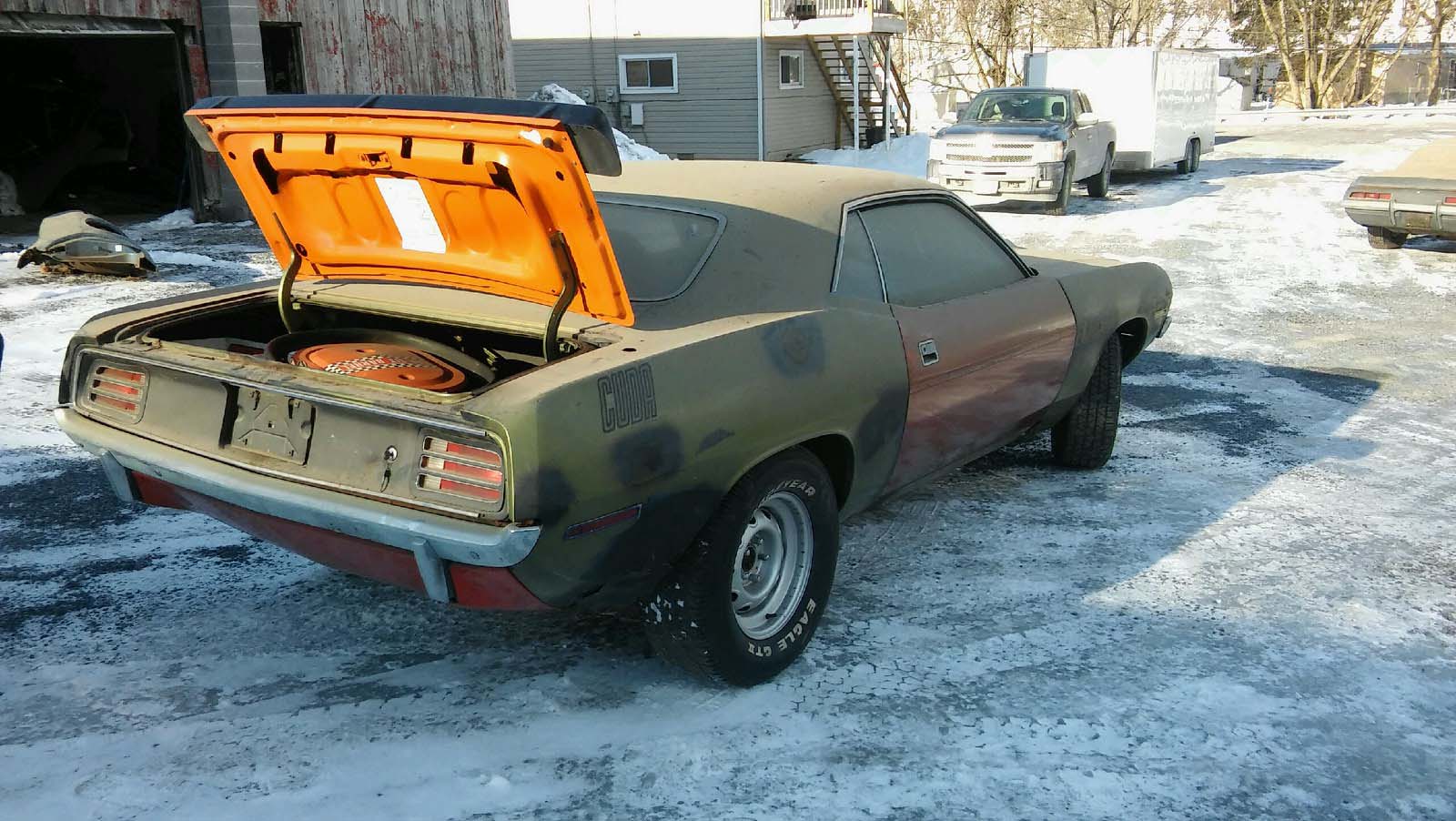 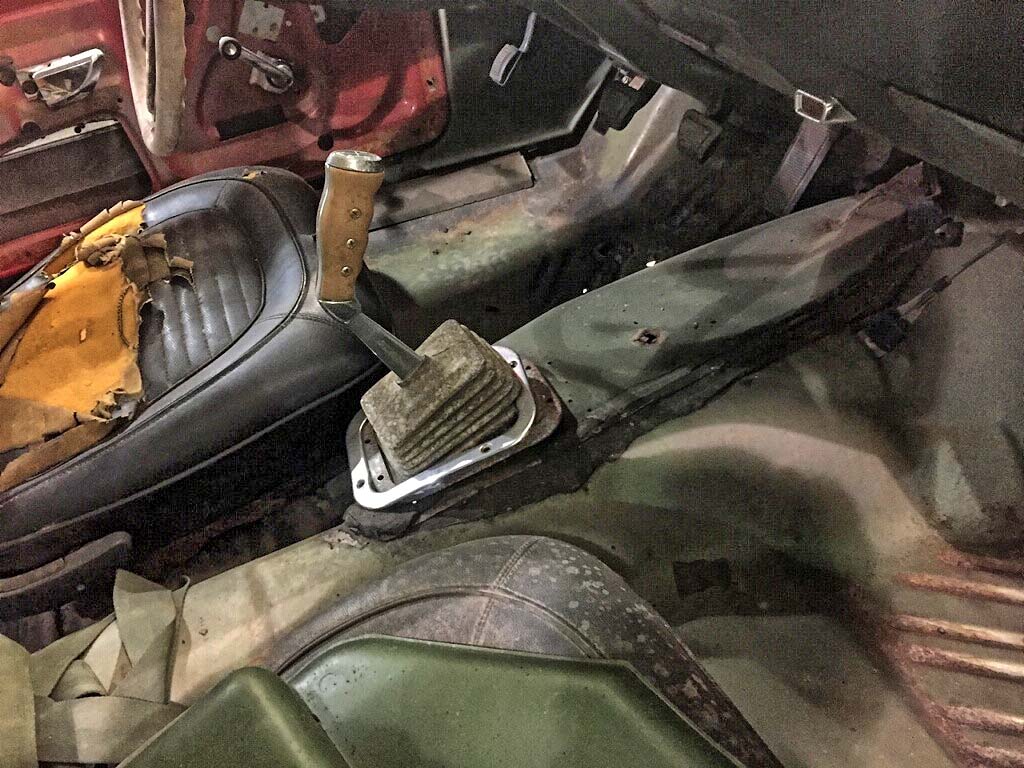