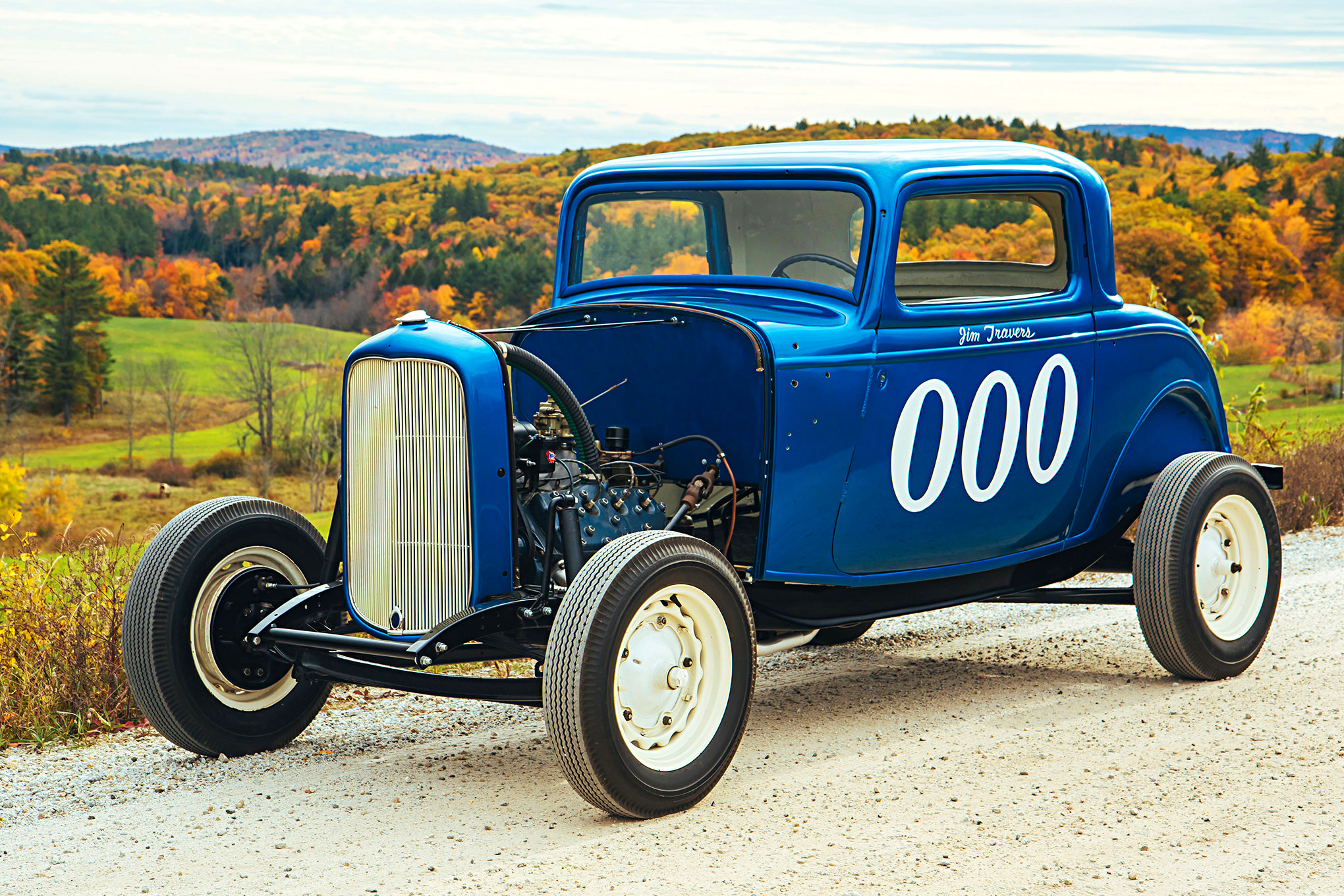 Years ago, Dave Simard, who is known for building elaborate street rods out of Leominster, Massachusetts, picked up an old stock car from Harvey Price. Harvey had dug the relic, a ’32 three-window coupe, out of a sand pit in Lunenburg, Massachusetts. In the early 1990s, Bruce Tonneson bought the stock car’s body and a ’32 Victoria body from Dave and then left them at Howard Towne’s shop on his way home. After the parts sat around for a while—two years, it turns out—Howard ended up selling the stock car body back to Dave. Dave needed the right rear quarter, the only good panel on the body, to complete another ’32 three-window. Howard had two other three-window bodies that were in far better shape, so it wasn’t hard for him to give up the old car. Had he known its history at the time, though, things might have been very different.

Dave then sold what was left of the body to Fred Ferrah, who used some of its parts to raise the roof on his chopped ’32 three-window. Fred took what was left of the car to the Hershey swap meet to unload it, but none of it sold. He then went to the Amherst, New Hampshire, flea market in 2002 to see if anyone would take it. A friend of Howard’s out of Enfield, New Hampshire, bought it all and then asked Howard if he was interested in any of the parts. Though he wasn’t too keen on them, Howard decided to take a look and ended up taking all the parts home. To Howard, it seemed like he did his best to get rid of the car, but it just kept coming back. Everywhere he went, he kept bumping into pieces of it.

An old friend of Howard’s, Randy Haubrich from Grafton, Massachusetts, also had old stock cars, and he was visited often by Marty Harty, who sold tools, air hoses, jackstands, and so on, out of his van. On one trip Marty brought by some pictures of stock cars he had built long ago to share with Randy. One looked familiar to Randy, so he brought Marty up to meet Howard to confirm the car in the photograph was indeed the same car Howard had sitting there. Sure enough, the images depicted the same holes in the body as well as the door welds and other unique features. Howard had the car known as 000.

At this point Marty began to give Howard the whole history, although now Howard had a lot more to fix than if he had kept the coupe the first time it was in his hands.

The 000 name was not something Marty liked, but this was a special number for Jim Travers. In the spring of 1959, Jim paid Marty $700 to have the car built and ready to race in just a week’s time. Jim and his wife came to Marty’s junkyard and picked out the only three-window he had at the time. With the help of his brother, Marty finished the build with a ’56 Dodge Royal Blue Metallic paint job and Jim’s name on the driver side.

000 ran exhaust stacks, as seen in many of the early images, until Memorial Day 1959, when they were removed, leaving the mounting holes still visible on the sides of the body. That year Jim went to the Indy 500 with Marty’s brother to see the race, and while he was gone, Marty figured somebody should drive the coupe to keep the points up. Fred Borden drove 000 that night and won everything, though Jim was upset they had altered the car without his authorization. But if Fred hadn’t raced while Jim was away, Jim would never have won the Brookline, New Hampshire, championship. 000 raced in 1959 on four tracks, in Hudson and Brookline, New Hampshire, as well as West Peabody and Westbourough, Massachusetts. After that season, it was sold.

Howard decided to restore the coupe back to that very day in 1959. It would take him eight years, off and on, to complete the project. He had to find another quarter-panel plus other pieces to put the roof back that had been cut out. He saved everything else, like the chassis, and kept as much of the original body as possible. Howard even decided to fix some items you normally wouldn’t do, like cutting up postage-stamp-size pieces of metal to fill the Swiss-cheesed body, taking a considerable amount of time.

The hardest challenge was fixing the rough body without buying new parts. The door skins, for example, had been welded right into the hull so the driver had to climb through the window. Howard decided to imitate the look and was able to locate the original driver-side doorskin that had been ripped off previously. He mounted it to the wooden frame behind the original welds, but he also made the passenger door open and shut so he wouldn’t have to get in the car through a window.

With the body coming together, Howard began to further study Marty’s photographs, ask him questions, and examine the parts he had from 000 to complete the rest. For instance, the car didn’t come with a front or rear suspension, so Marty described how, instead of using shackles, he had anchored the front spring solid on one side and made it slide on the other side (and was able to shim to adjust height for track requirements). That kept the spring action, but the front end wouldn’t sway with shocks mounted up high.

Marty also informed him that the five-vented rear wheels were ’39-’42 Ford 3/4-ton wheels, compared to the normal ’36-’39 Ford passenger-car front wheels. Apparently in the 1950s, you could get the rear wheels from the Ford garage because they were obsolete and nobody wanted them. For a race car, though, they were stronger and an inch wider. Howard was able to find five of them while building the project.

The 1959 image shows the engine quite clearly. It’s a ’37 21-stud, 85hp motor with water pumps in the block. Howard went through three engines before finding one without cracks, then had machine work done before putting it together. While the coil is a ’42-’48 Ford and the fuel pump has a glass bowl, Howard did install a generator instead of the original idler. Howard also added a few gauges for convenience, so he could monitor the engine for overheating.

From the vintage image, it was determined there was no toe board, so Howard left it that way but may add one later. The bulky steering linkage was a universal joint from power-take-offs used on dump trucks, which Howard found at a flea market for $10 each brand new. This helped, as the steering shaft doesn’t come straight off the steering box because it’s a later model. Marty also advised that 000 steered off the right front spindle, not the left (typical for the car) because it was better for racing.

As the build neared completion, Howard was contacted by Jim’s half-brother Richard, who is the kid in many of the images Marty had. Richard told Howard that while Jim had moved to California, he was still in Massachusetts. He drove up to New Hampshire to see the project just before it was finished and has been in touch since then.

Howard then started wrapping up the build. He used a ’36 Ford steering wheel, since that’s what the coupe had in one of the old photos. The pedals could be seen in a photo, looking like ’32 pedals modified to work hydraulic brakes. The remains of the original ignition switch were in the car when Howard had it, so he replaced the knife switch that was used for ignition. The seat was still in it, so he had the frame to work with plus Marty’s memory to fill in the details. With the interior done, Marty and Richard then signed 000. The images do show a rollcage, which is the next item to install, and Howard plans on reusing as much of the original as possible.

While traveling to several historical track race nights, a little more of the 000’s history from the 1980s surfaced. That’s when Harvey Price got it out of that Lunenburg sand pit, and where they later were allowed by the land owner to dig up the original motor that had been pried out while removing 000 from the ground.

Saved from Mother Nature’s burial, 000 is now cruising around the New Hampshire mountains thanks to Howard. It’s that rare race car that got away, but just kept coming back! 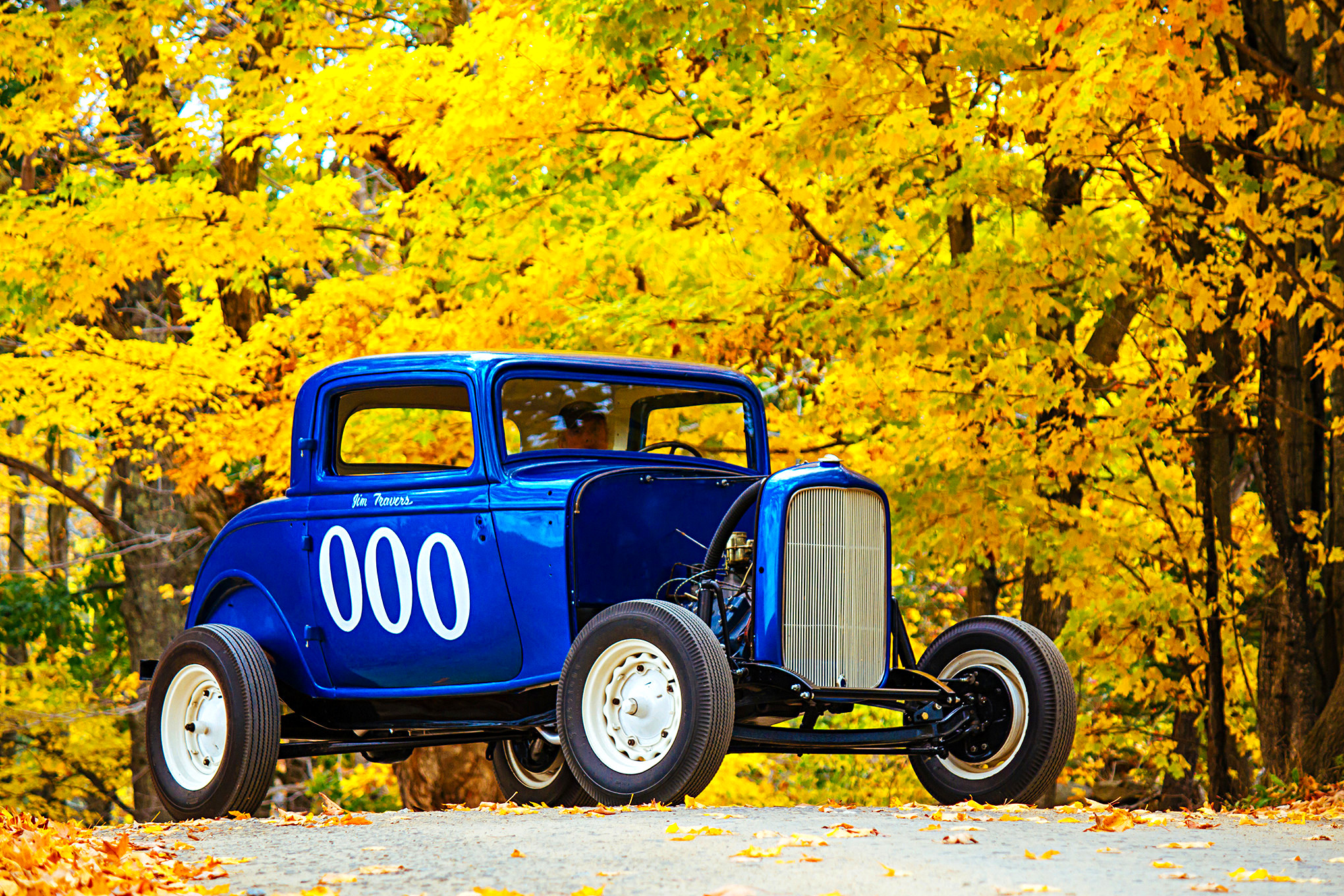 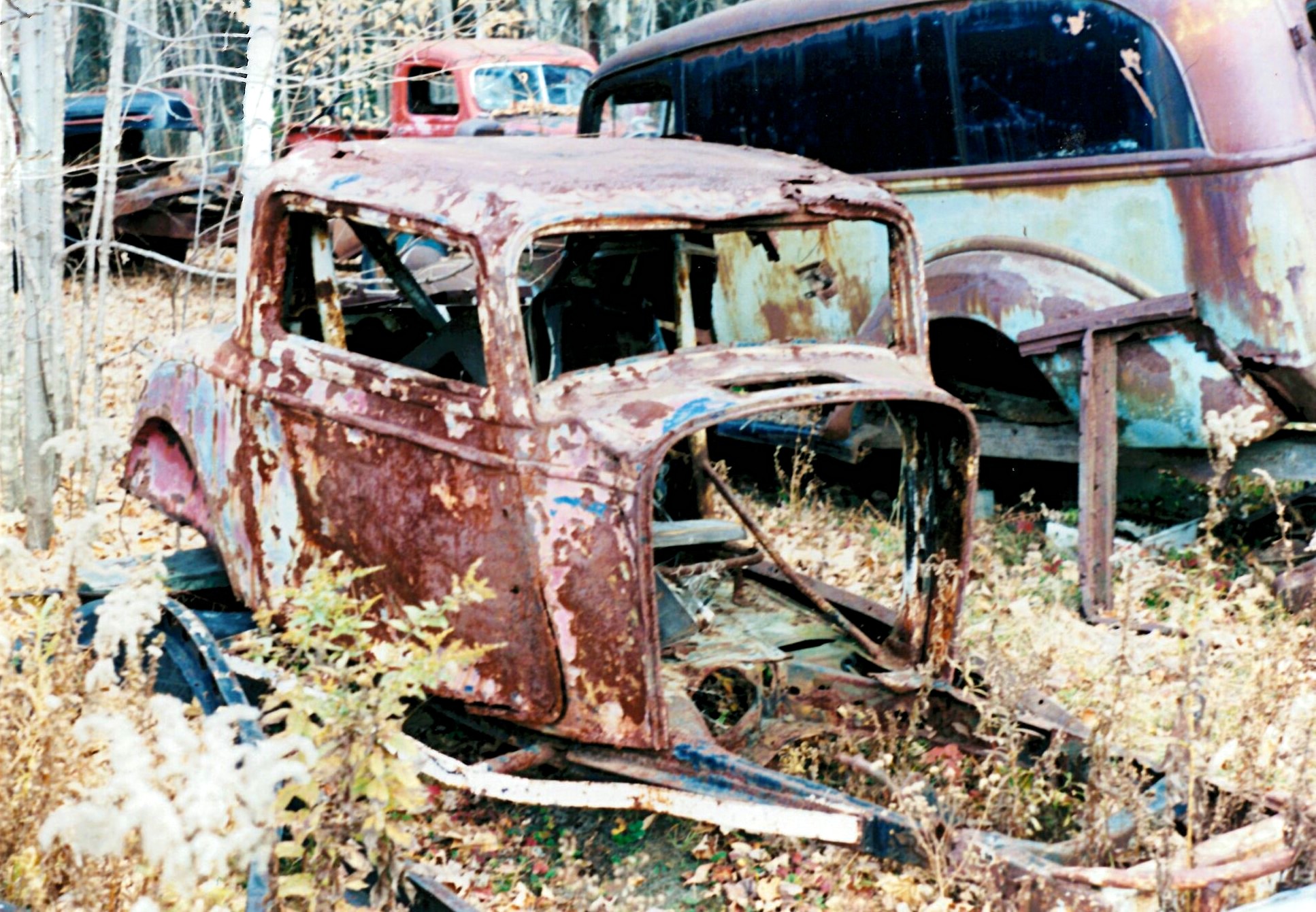 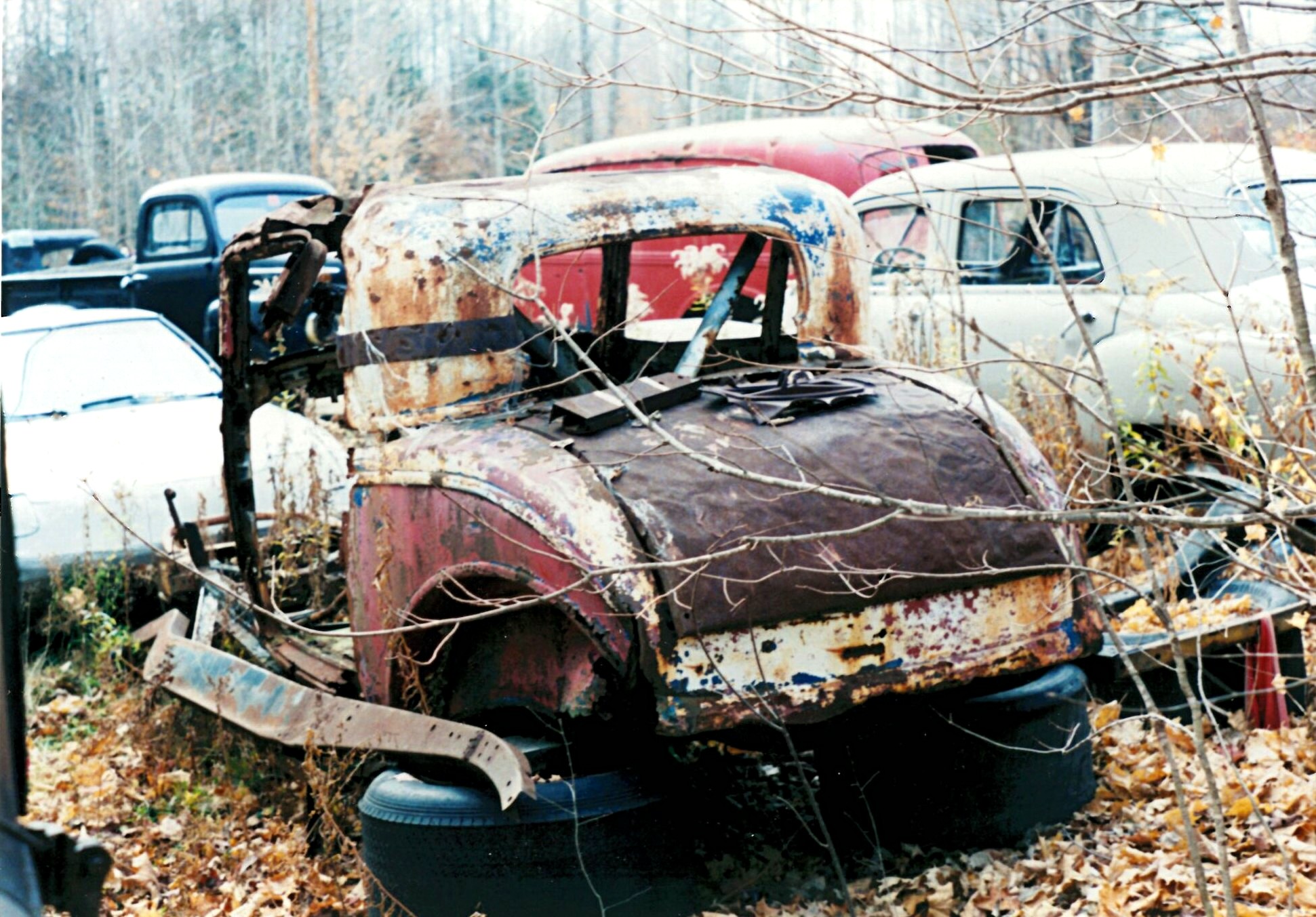 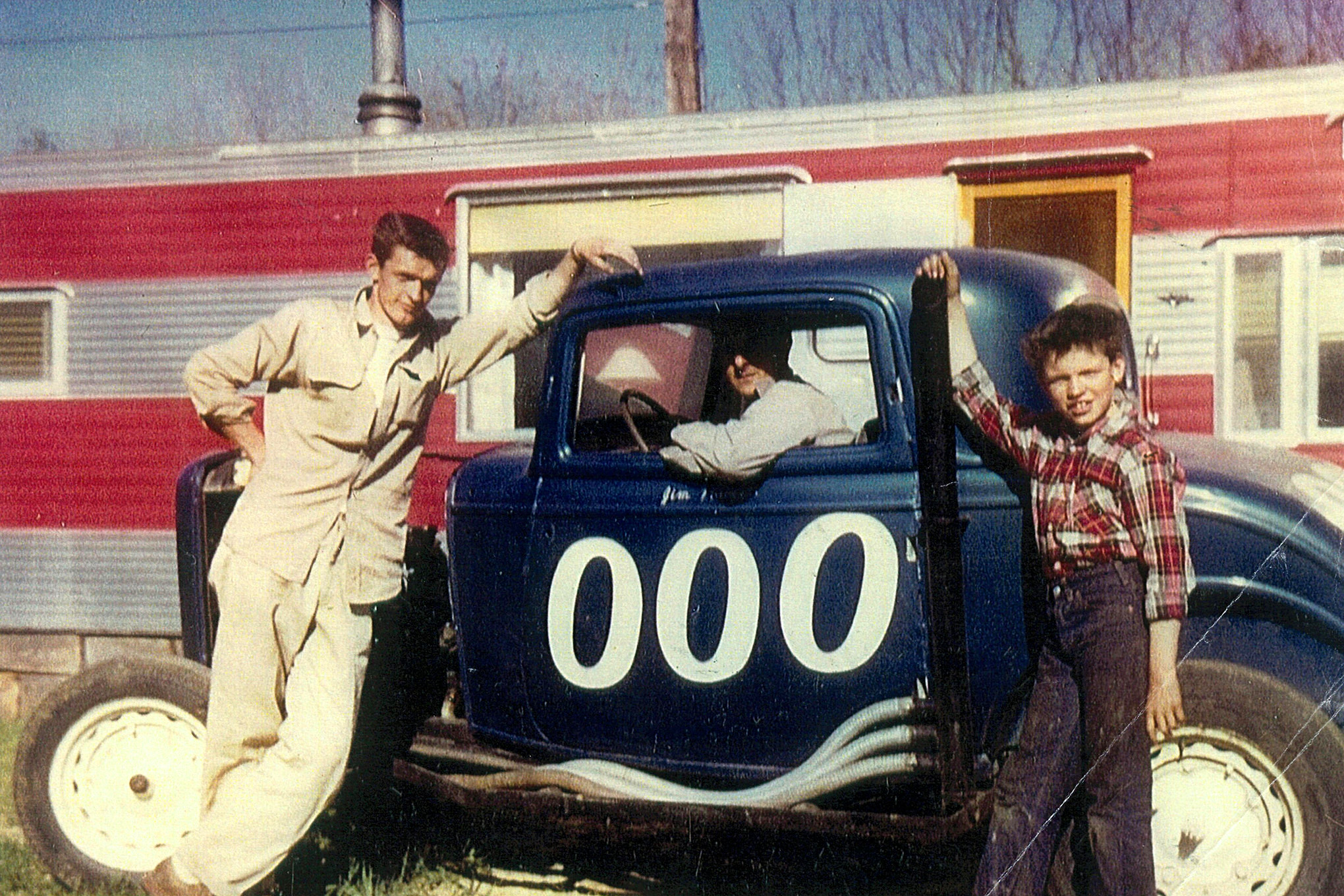 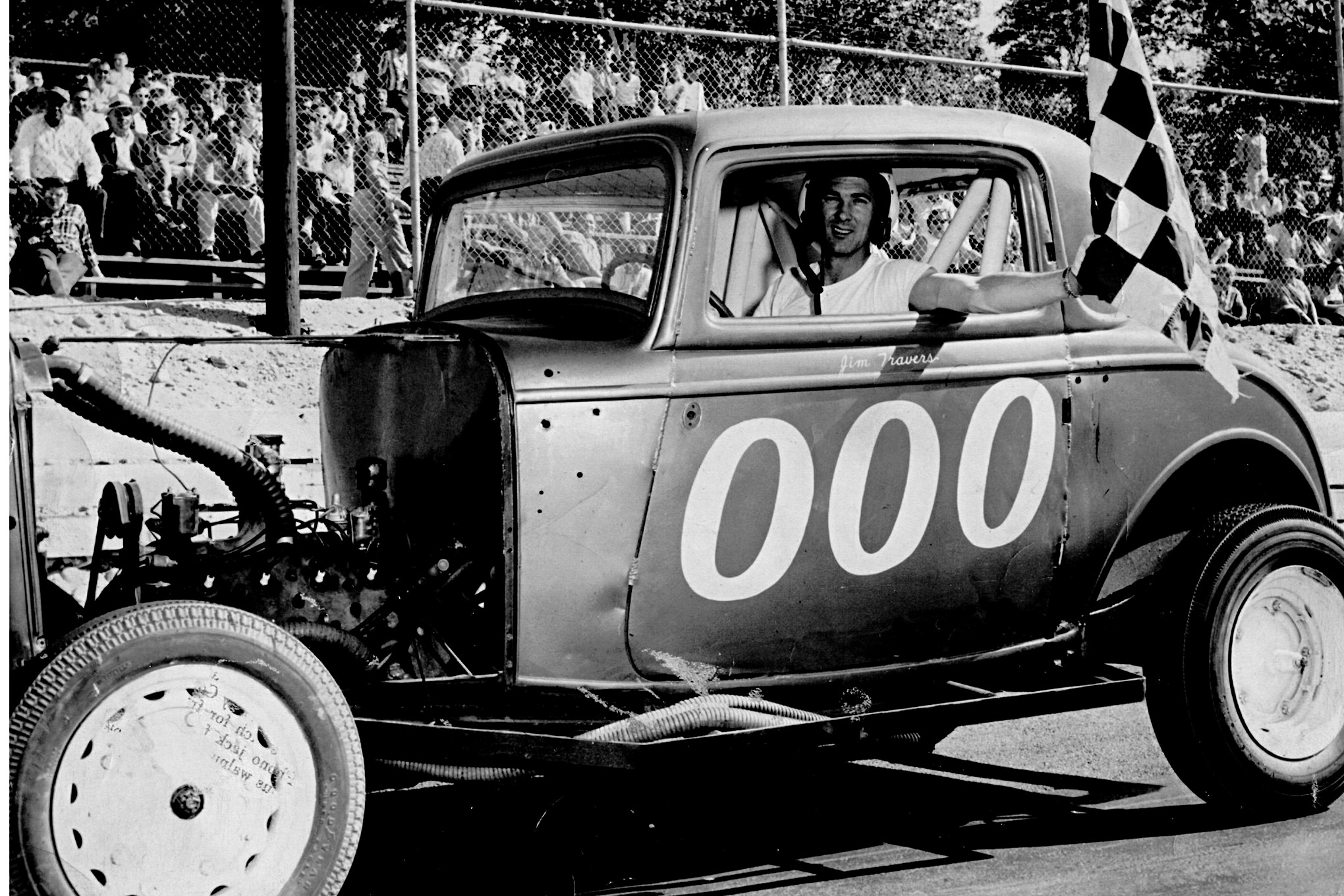 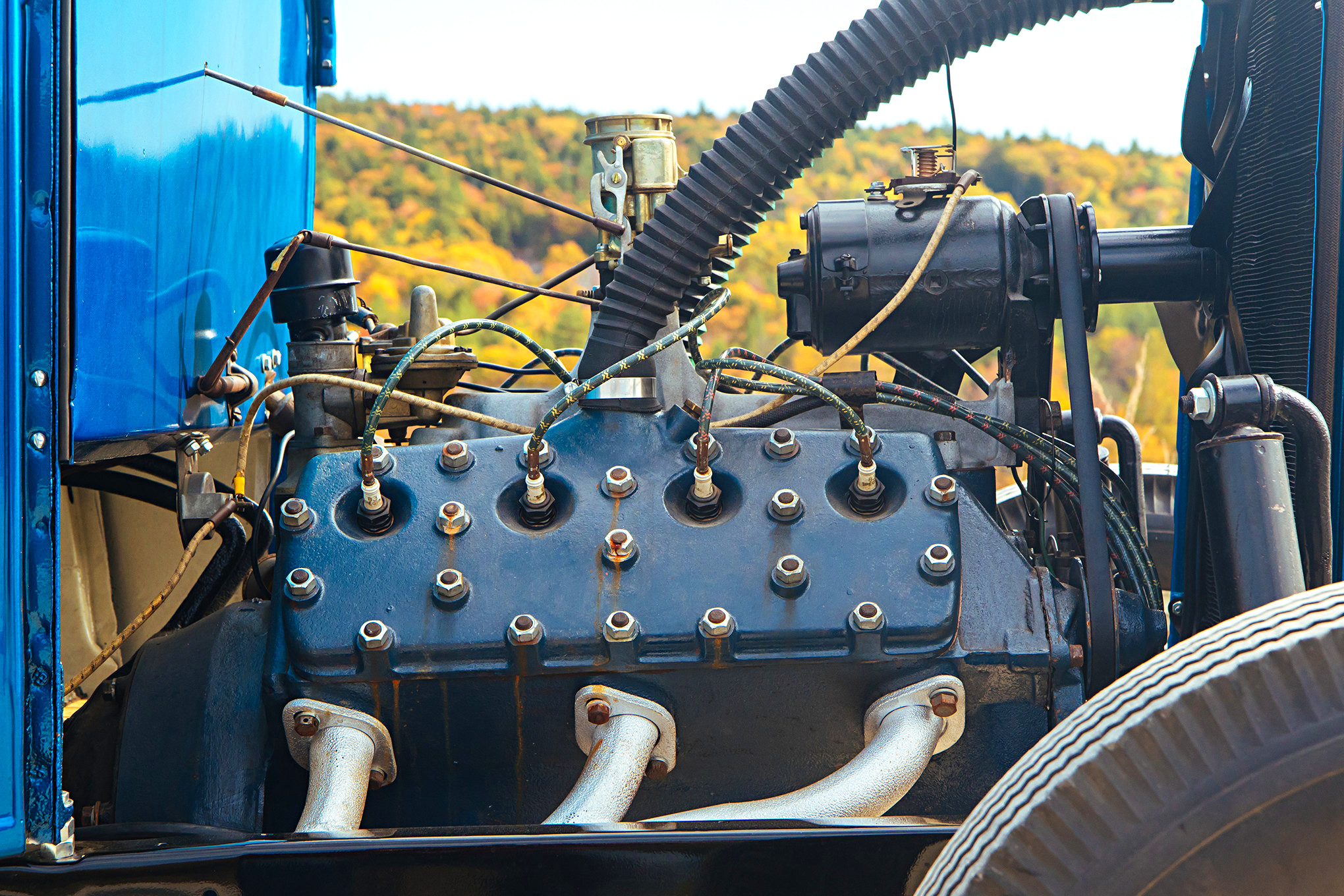 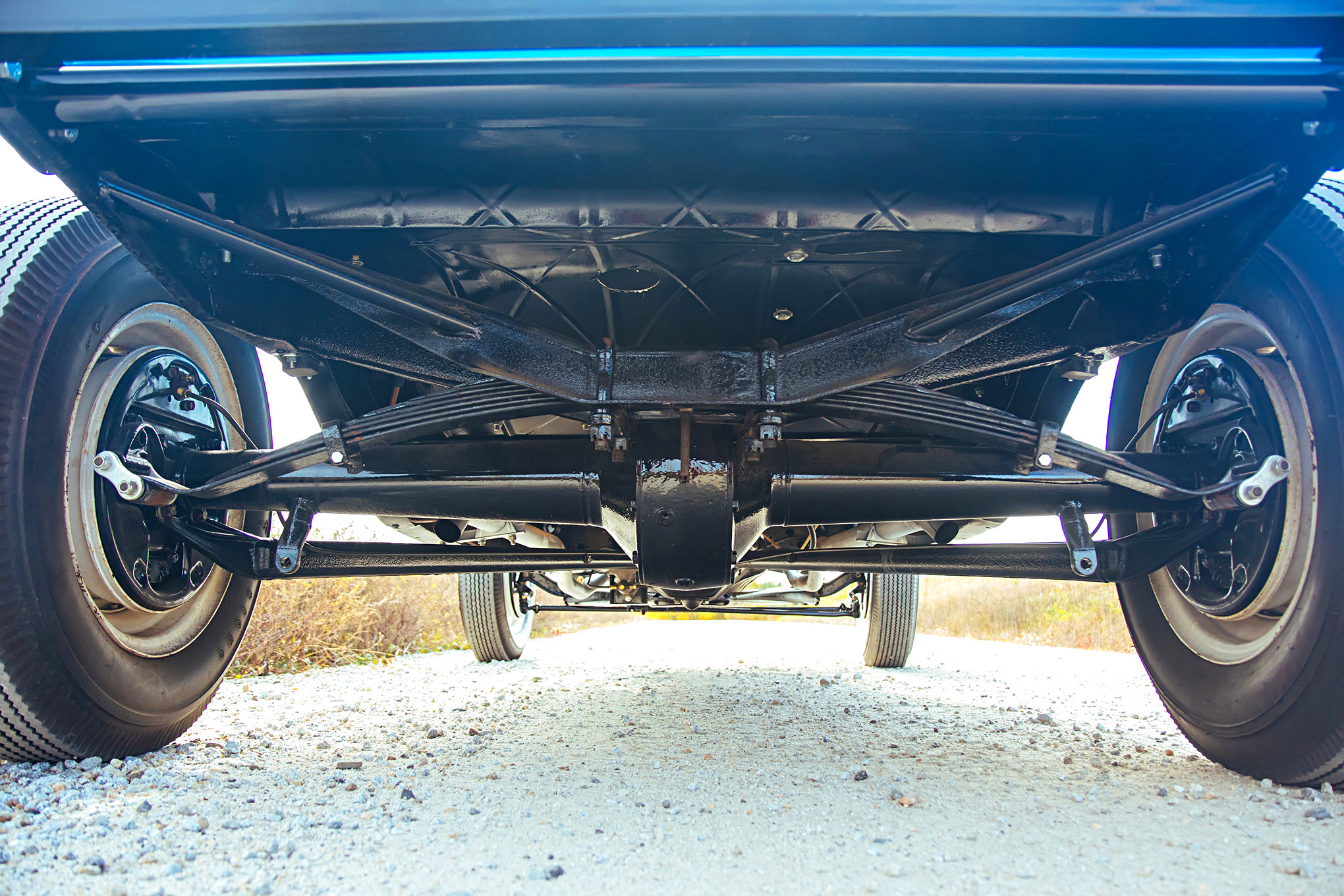 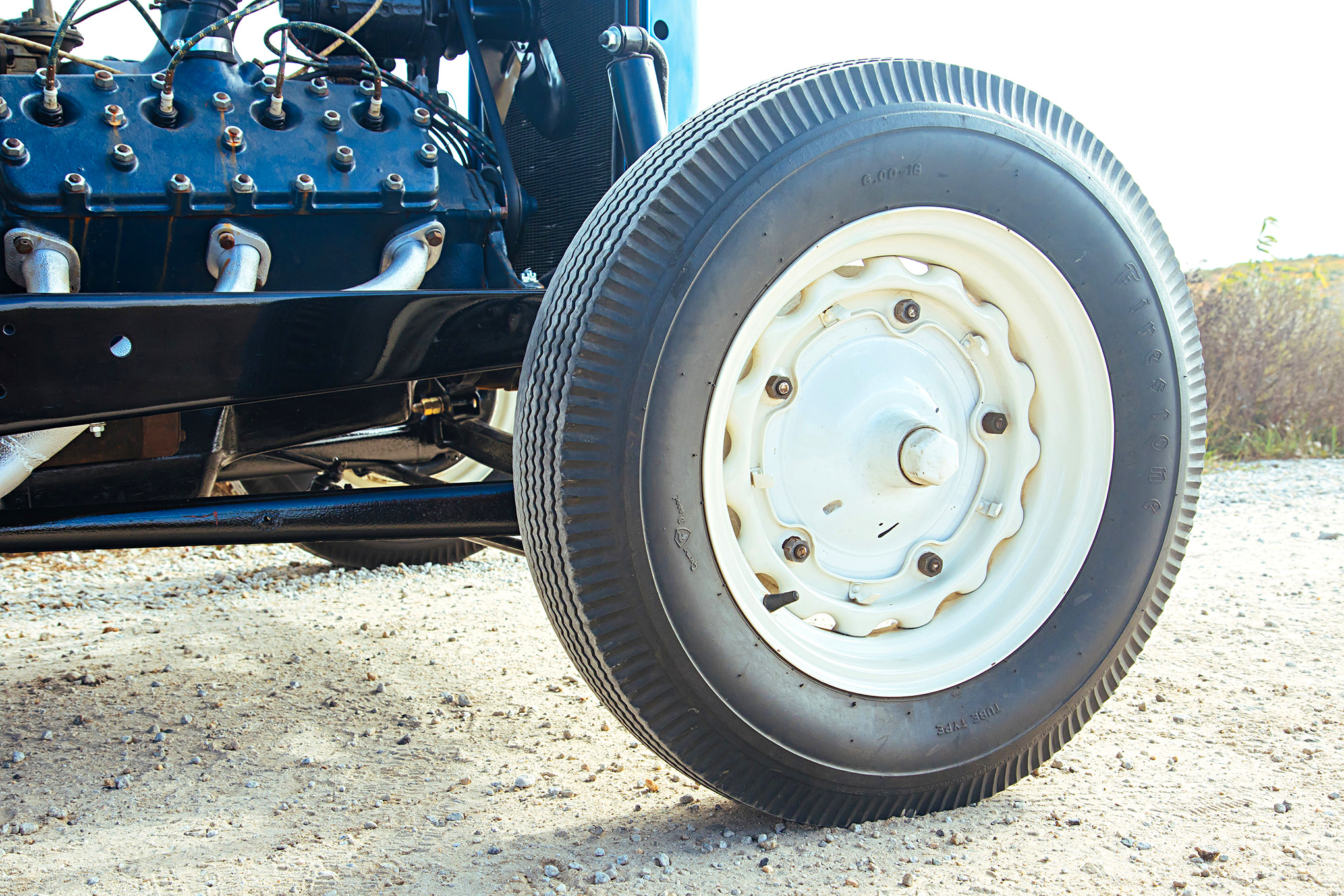 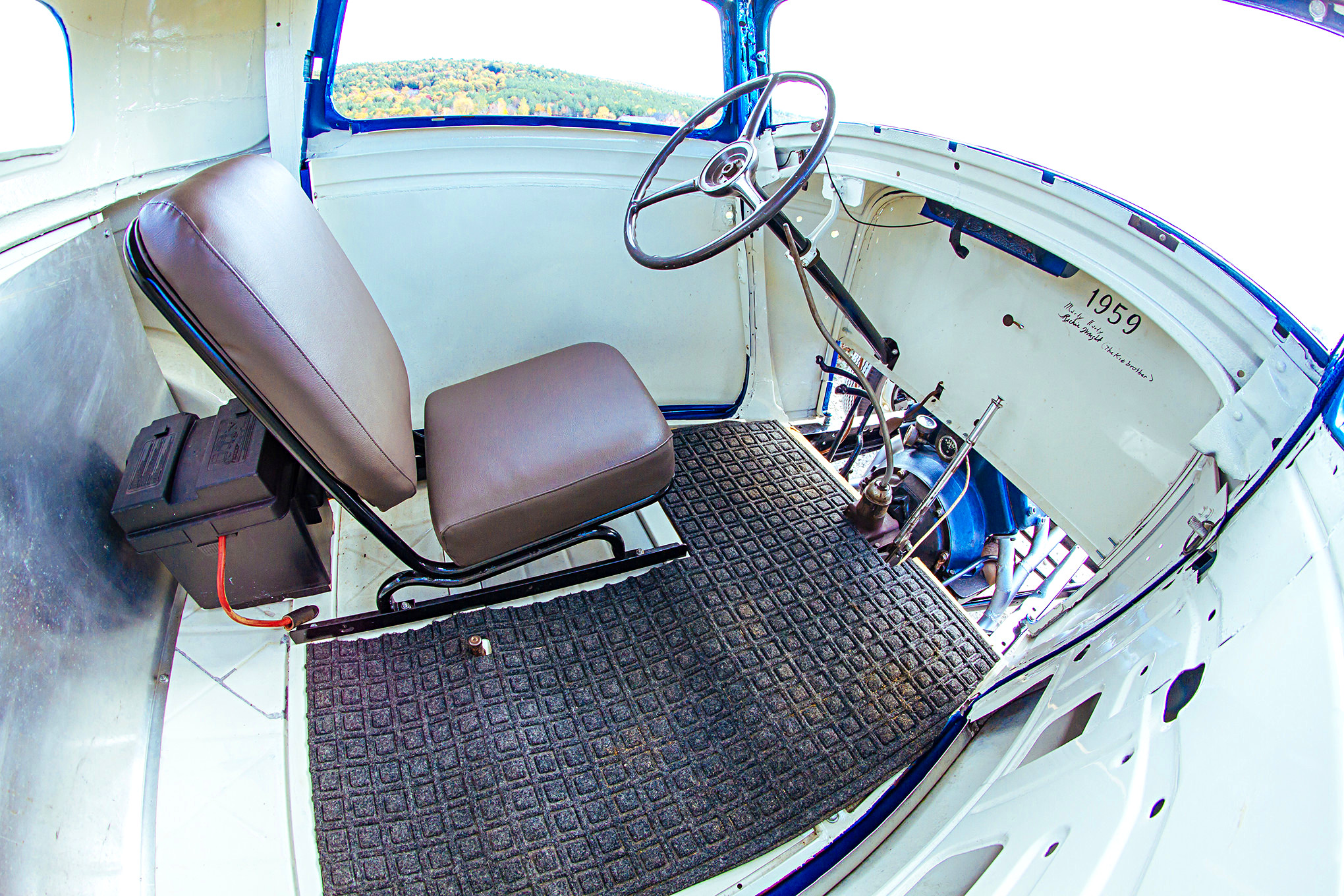 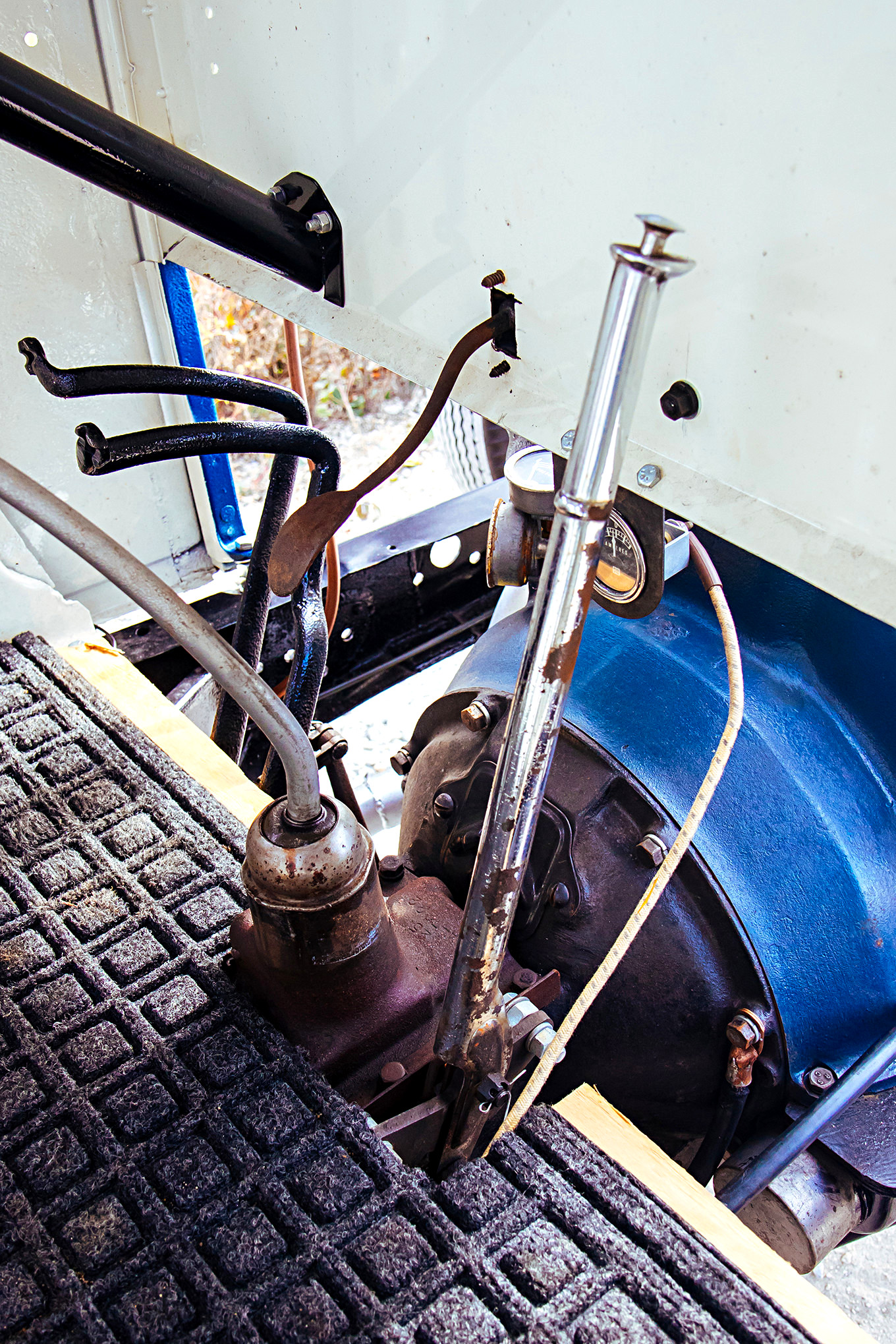 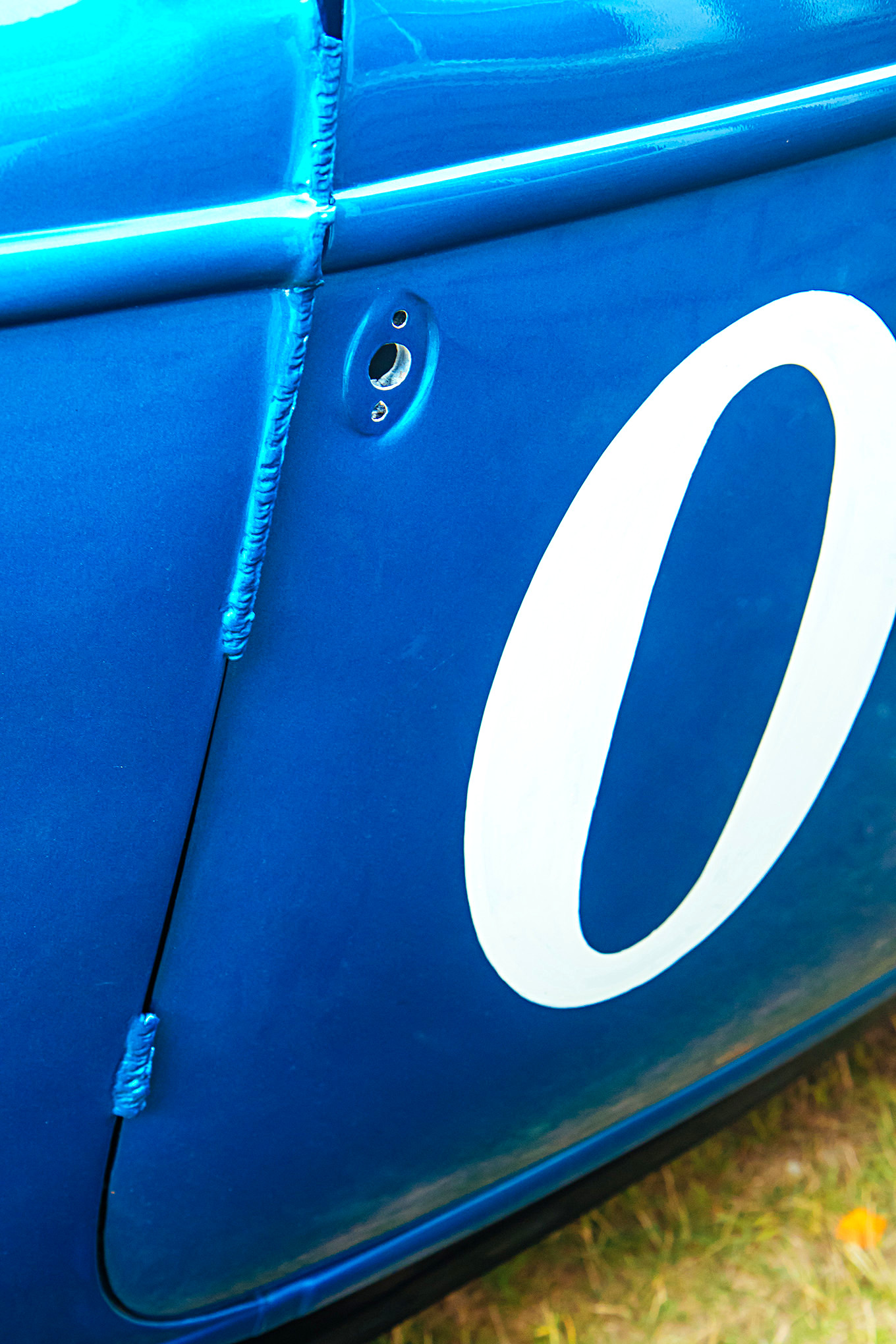