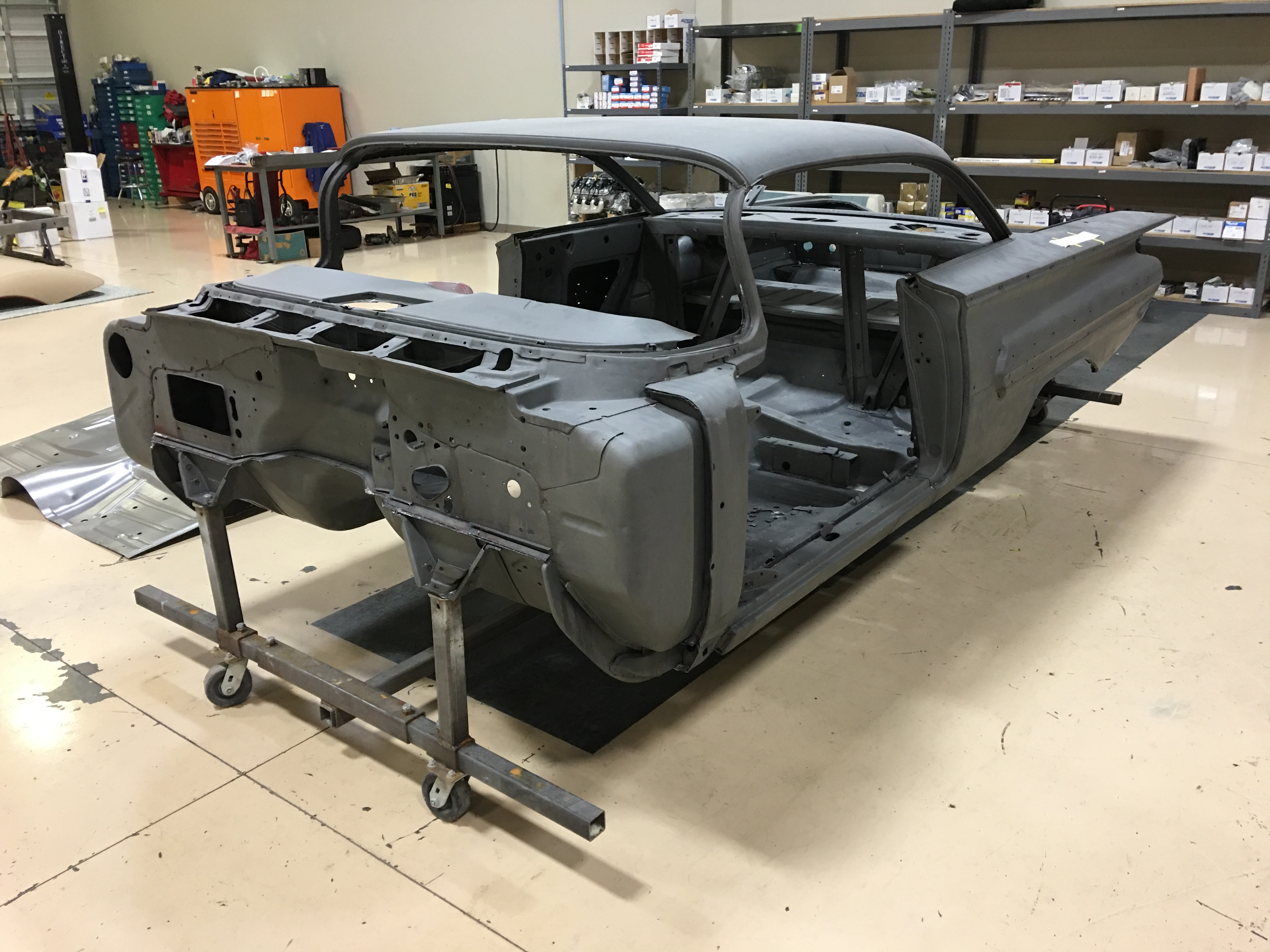 If you’ve been following the RKM Performance Center’s 1960 Impala build, you probably know it’s been well over a year since we’ve provided an in-depth look at the project. The reasoning behind that relative silence is simple. For starters, a build this intense takes a lot of planning, preparation and labor.  Additionally, as you can see in our Custom Builds articles, we’ve been fortunate enough to have to balance a full plate of additional projects. But alas, the wait is finally over, and here we are to, as we said at the end of the Deconstruction piece, dive right in to the fab process!

Planning this Chevy’s rebirth has been an epic challenge. Keep in mind, we’re not dealing with the kind of aftermarket support that’s enjoyed by names like Camaro or Chevelle. All the parts we’re sourcing for this car have to be either some form of original, extensively searched for, or flat out fabricated. Then, of course, we must get approval from the project’s owner to proceed with any added expense the results of those states generate. A perfect example is this classic’s massive quarter panels. After much research, we found a company that stamps replacements. However, after a bit more research, we discovered that, unfortunately, that same company had accidentally cracked its dies. So, we ended up fabricating custom quarters out of patch panels. More on that later.

When a car is this far gone, it’s always a sound idea to shore up the good metal before cutting out the rot. After all, at varying points during the fab process, we will be removing and replacing significant parts of the body’s structure. That meant the Fabrication phase began with this Chevy’s solid firewall and toe boards. And, quite honestly, the firewall and toe boards were so good that a little patching and cleaning was the only thing needed. Since this is a custom build, a smoothed firewall was always part of the plan. That said, a quick check of the pictures reveals that we aren’t entirely finished, as we still have to cap the car’s frame mounts. 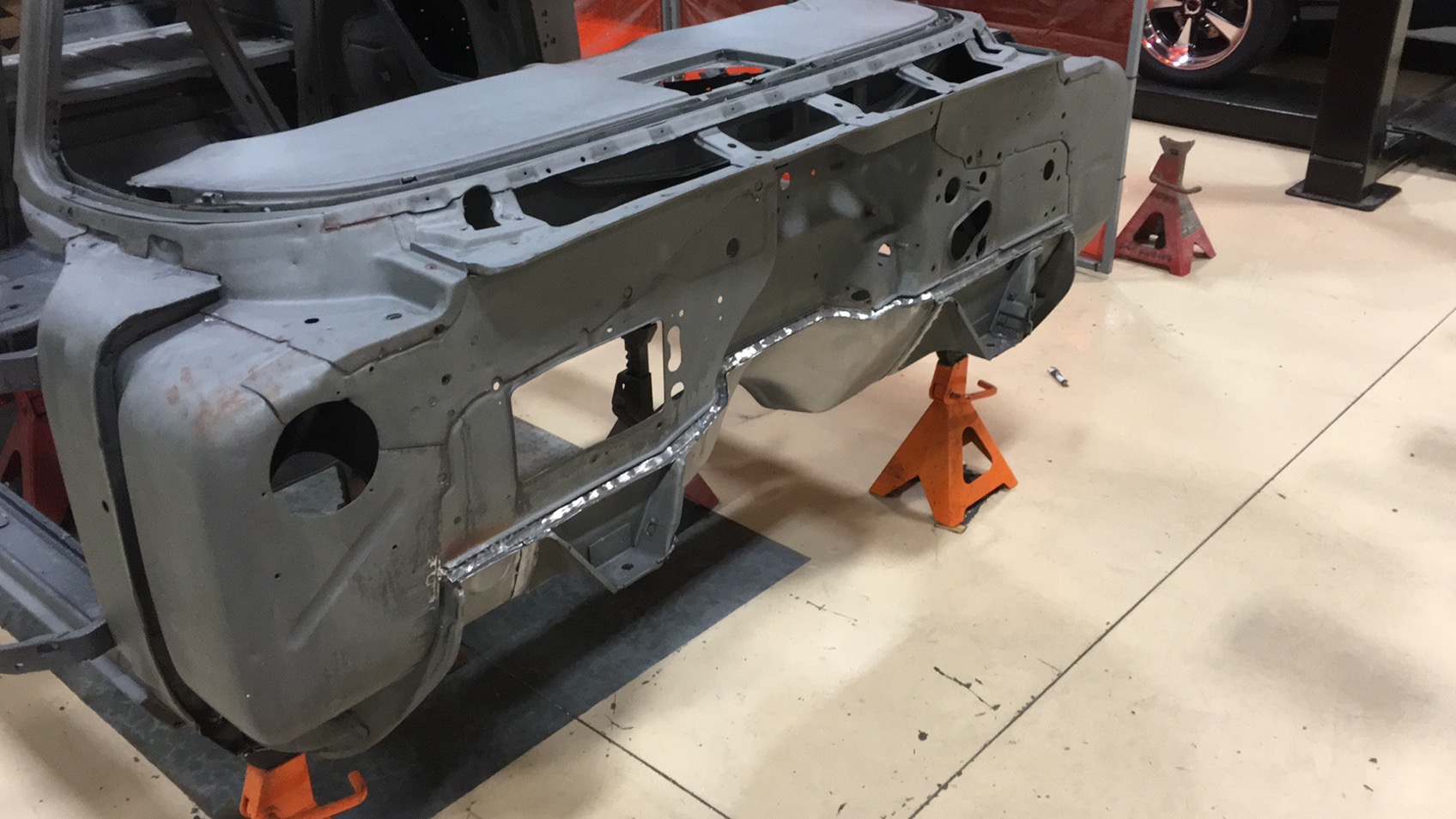 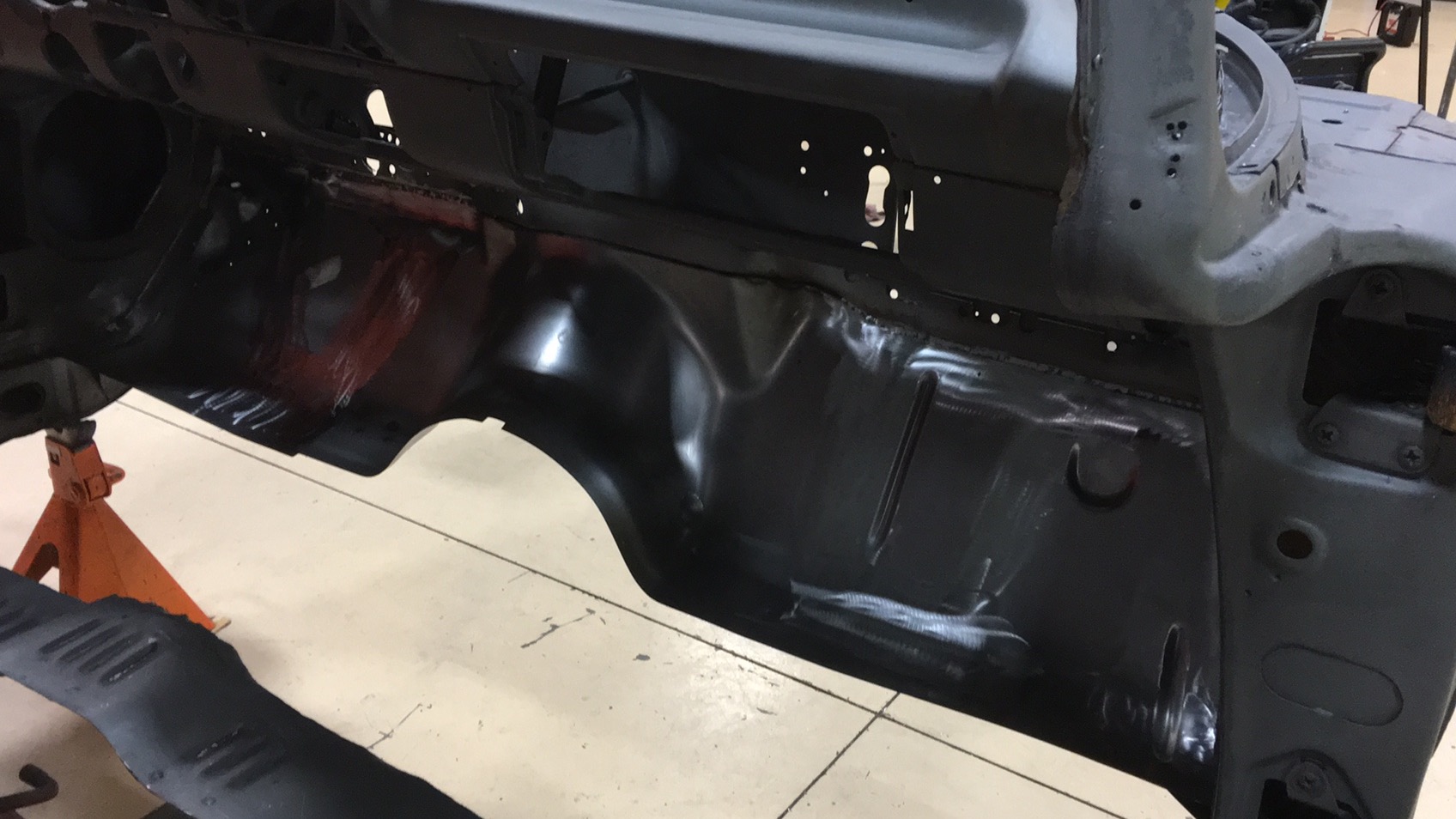 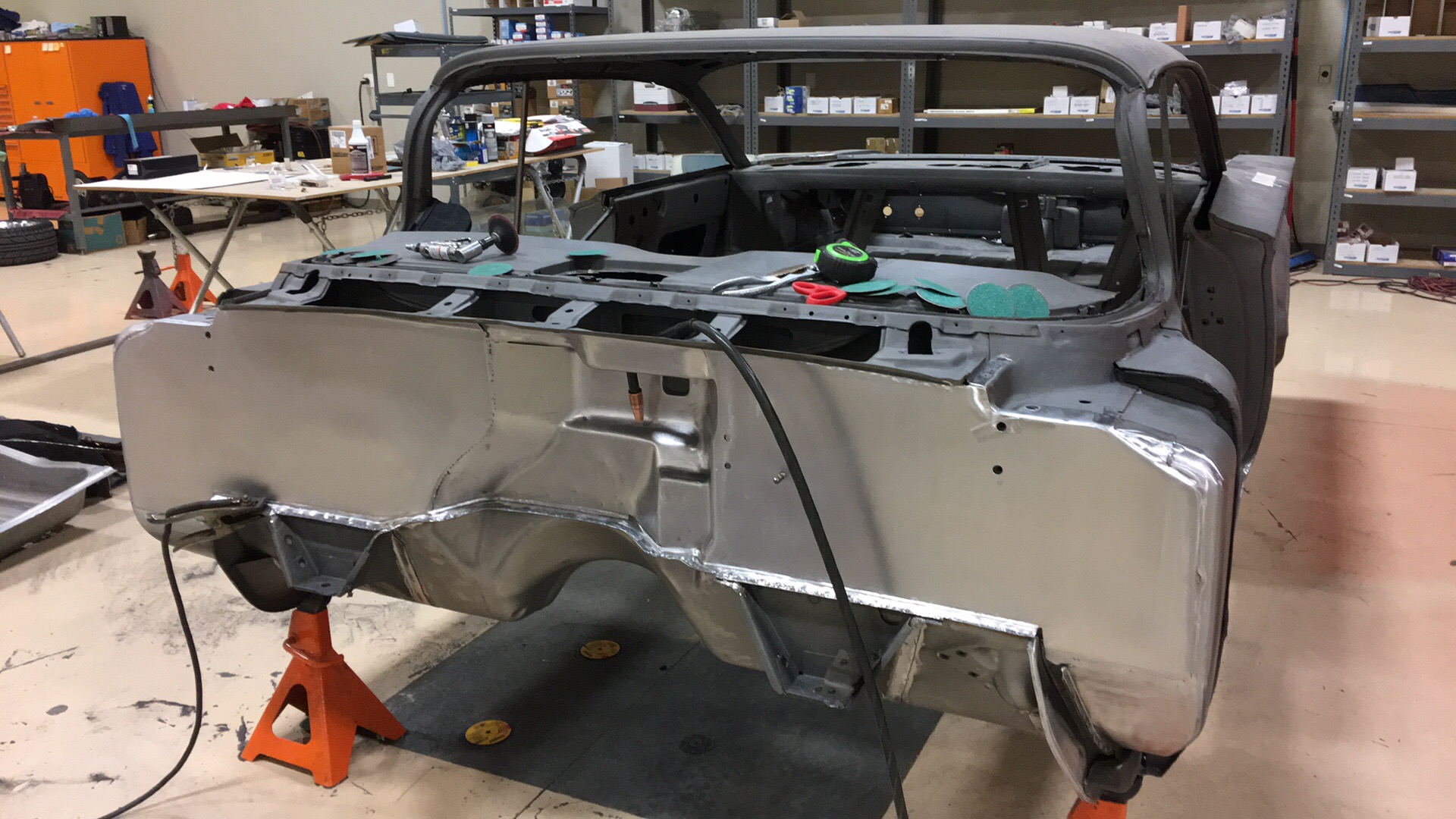 Since we we’re working on the front of this Chevy, we decided to go ahead and round things out by cleaning up the windshield channel and mending the car’s severely rusted A-pillars. Like every repair and modification done to this Impala, that involved hours of metal shaping and precise butt-welding; with the only exceptions being where the factory called for overlaps. 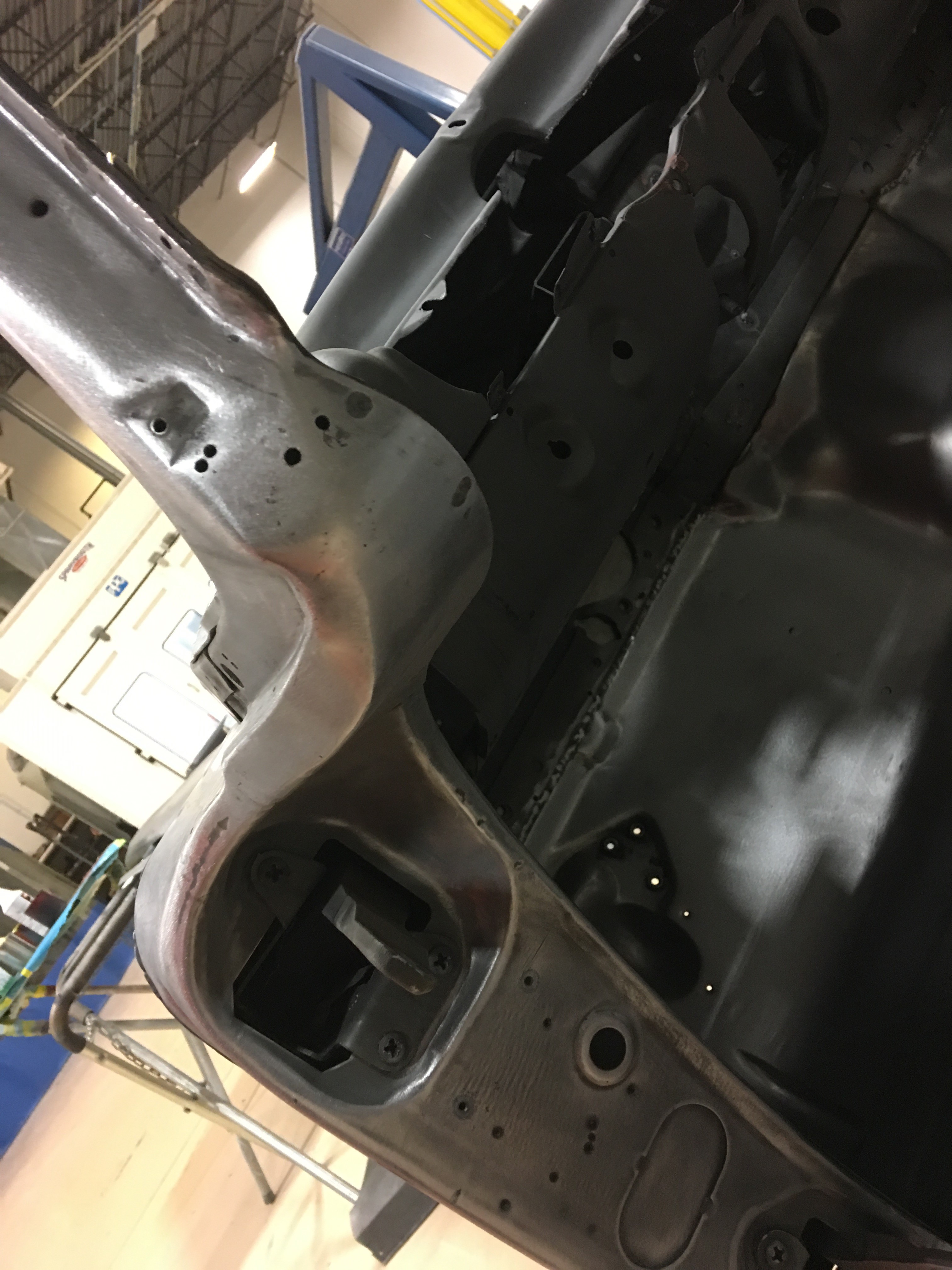 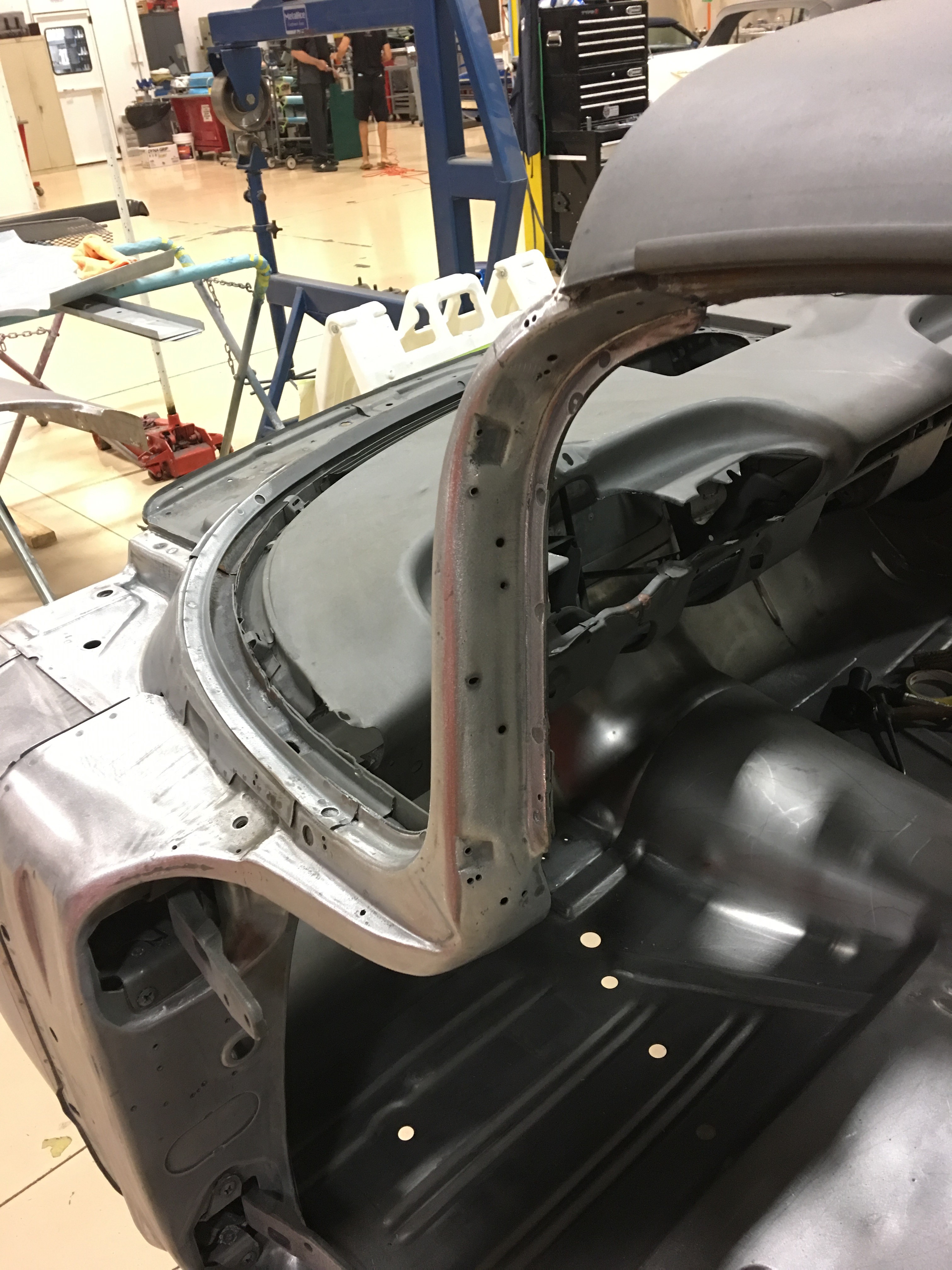 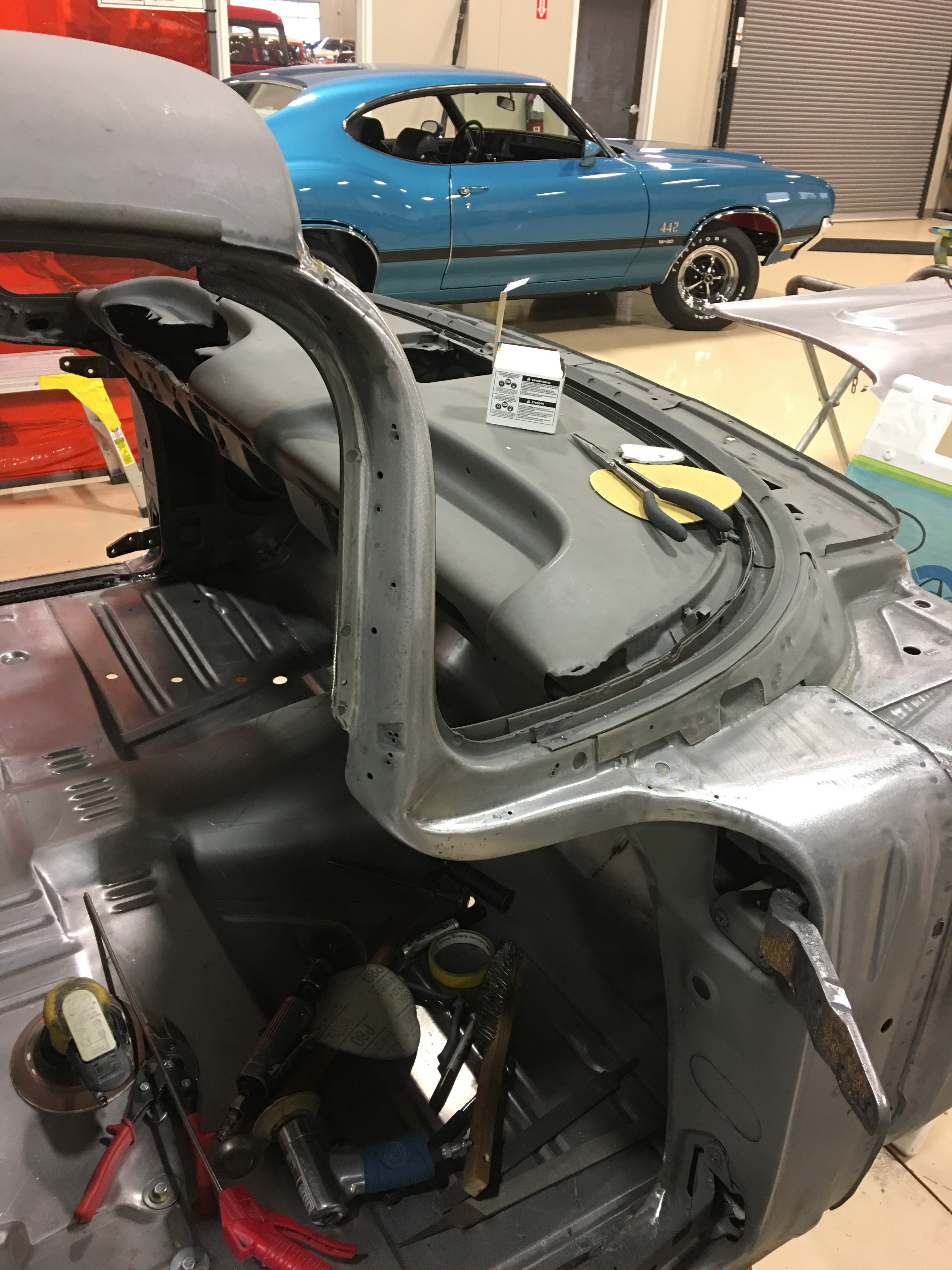 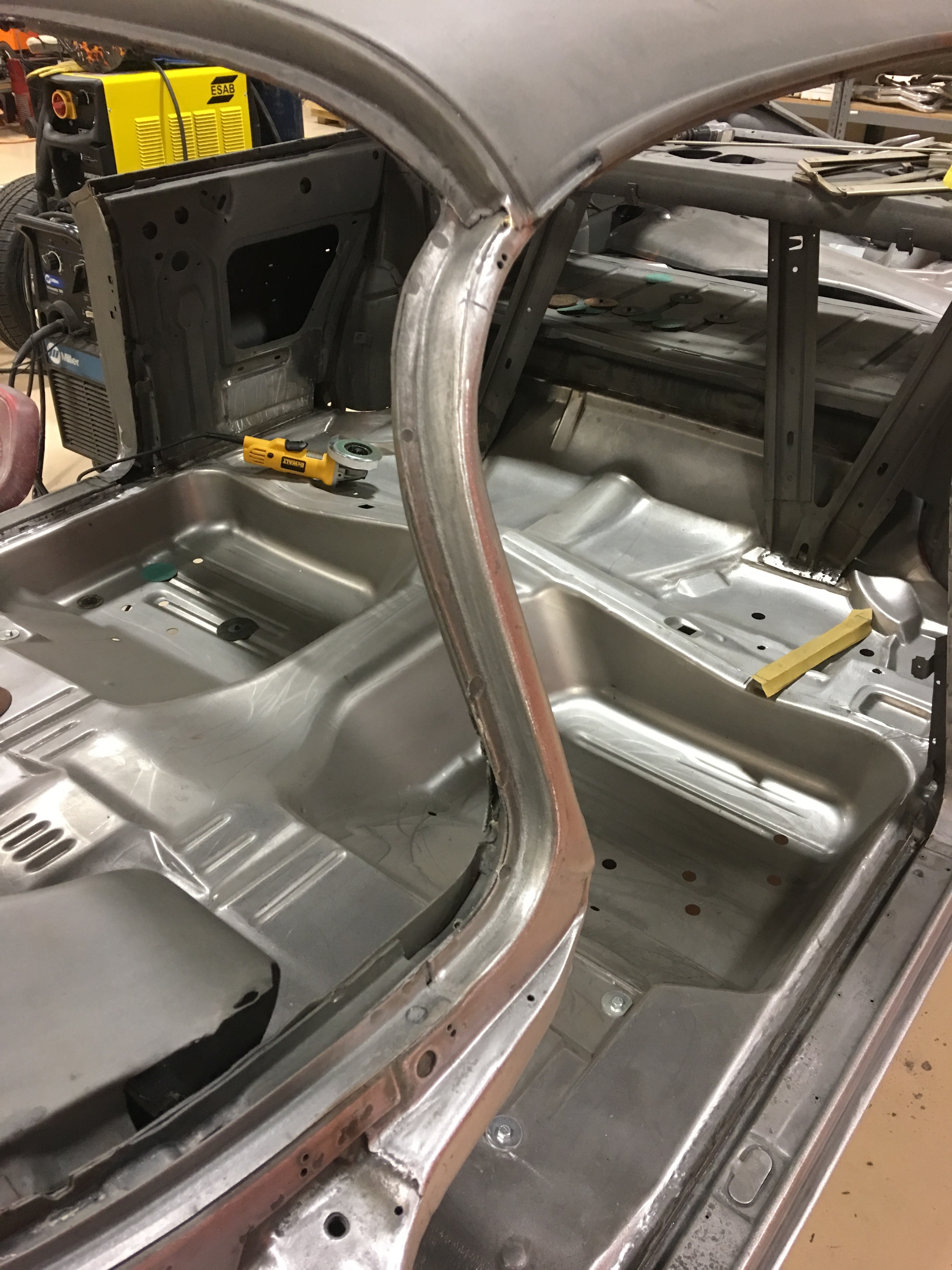 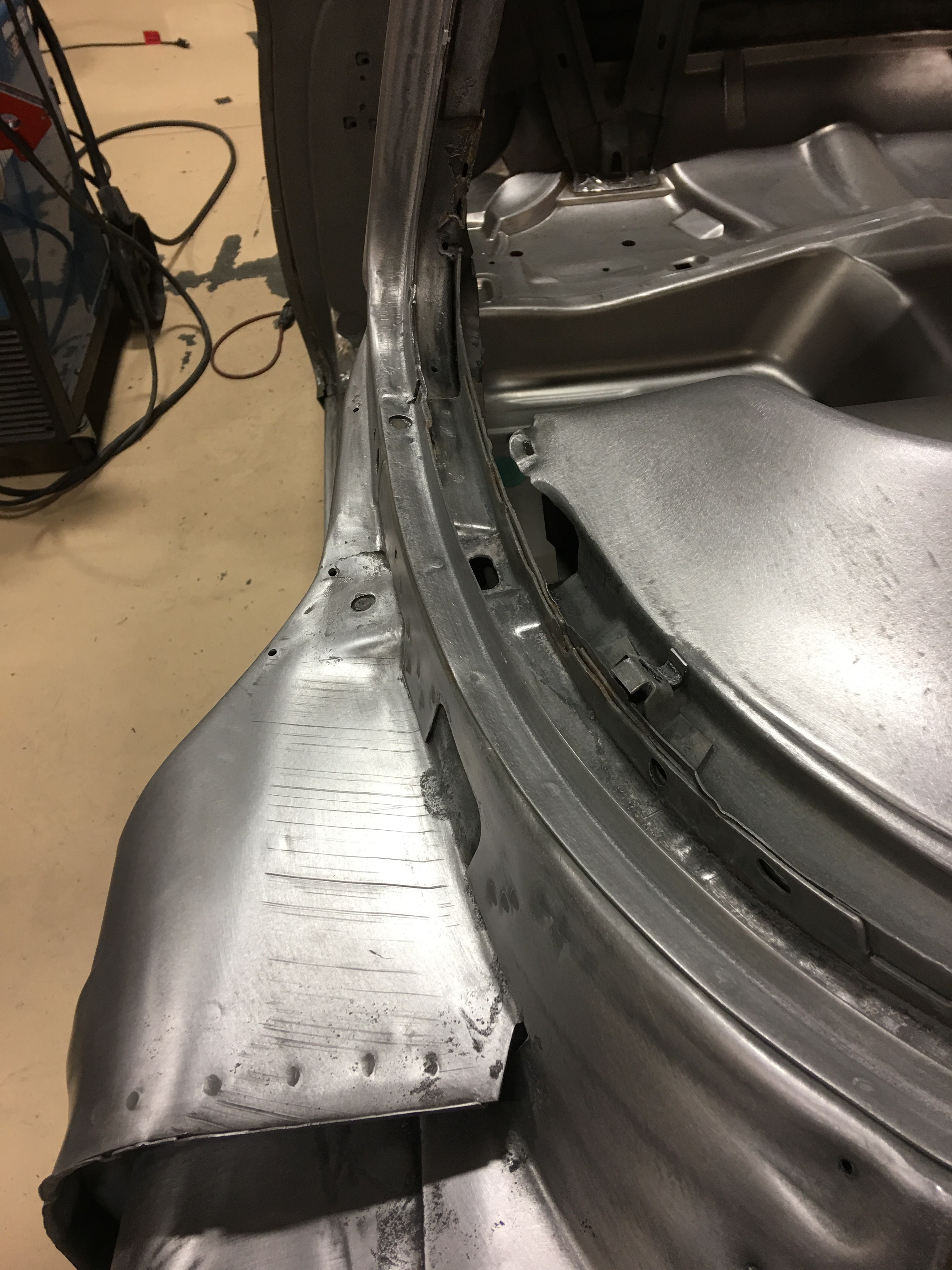 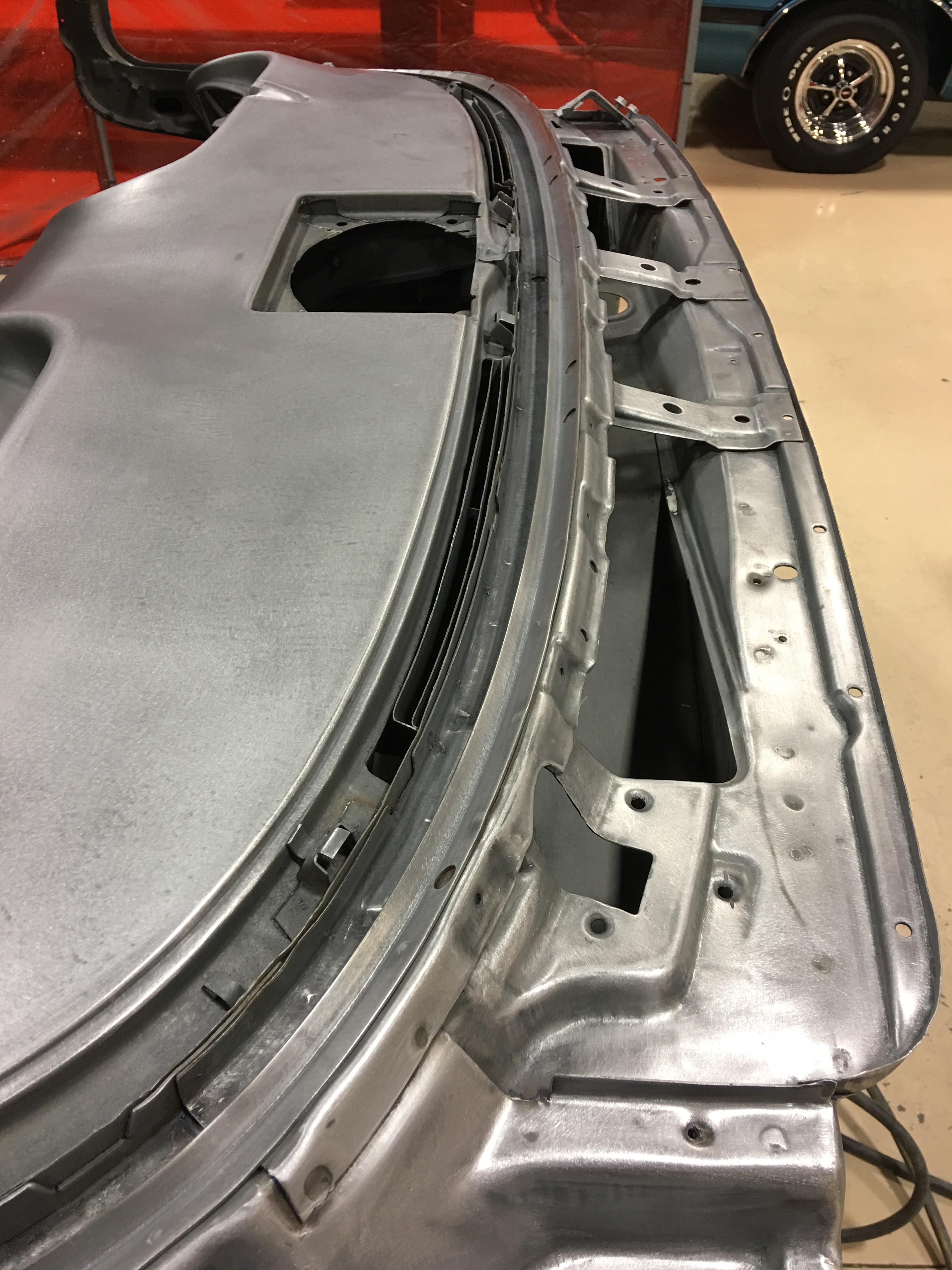 Floorpans are a common place to find cancer in any old ride, and this Impala is no exception. In fact, it proves the rule, as the floors were so rotted that we could easily push our fingers through the metal. Like the aforementioned firewall, the transmission tunnel was especially clean and salvageable, but that’s where the good fortune ended. Optimism abounded about saving at least some of the original pans, but after a day of chipping rust, our worst fears were confirmed. Not only was the floor gone, the rust was also beginning to eat the car’s outer and inner rockers, seriously compromising the body’s structure. But that’s a thought for the next paragraph, so let’s keep talking about pans. After welding in some temporary spider braces at this Chevy’s doors, we eventually installed a brand new floor. However, as pretty as those pans are, they’ll meet the saw before the end of our project. Why, you ask? Because that’s the best way to create a truly top notch restoration. We’ve installed the new pans to keep the body squared and as close to factory as possible. Then we’ll go in and make the needed modifications for our recessed engine, modern transmission and custom Roadster Shop chassis. In fact, there’s a good chance we’ll have to custom-fabricate a new transmission tunnel. But in the end, our goal is to produce a world-class pro-tourer, and this is the correct way to build the car. 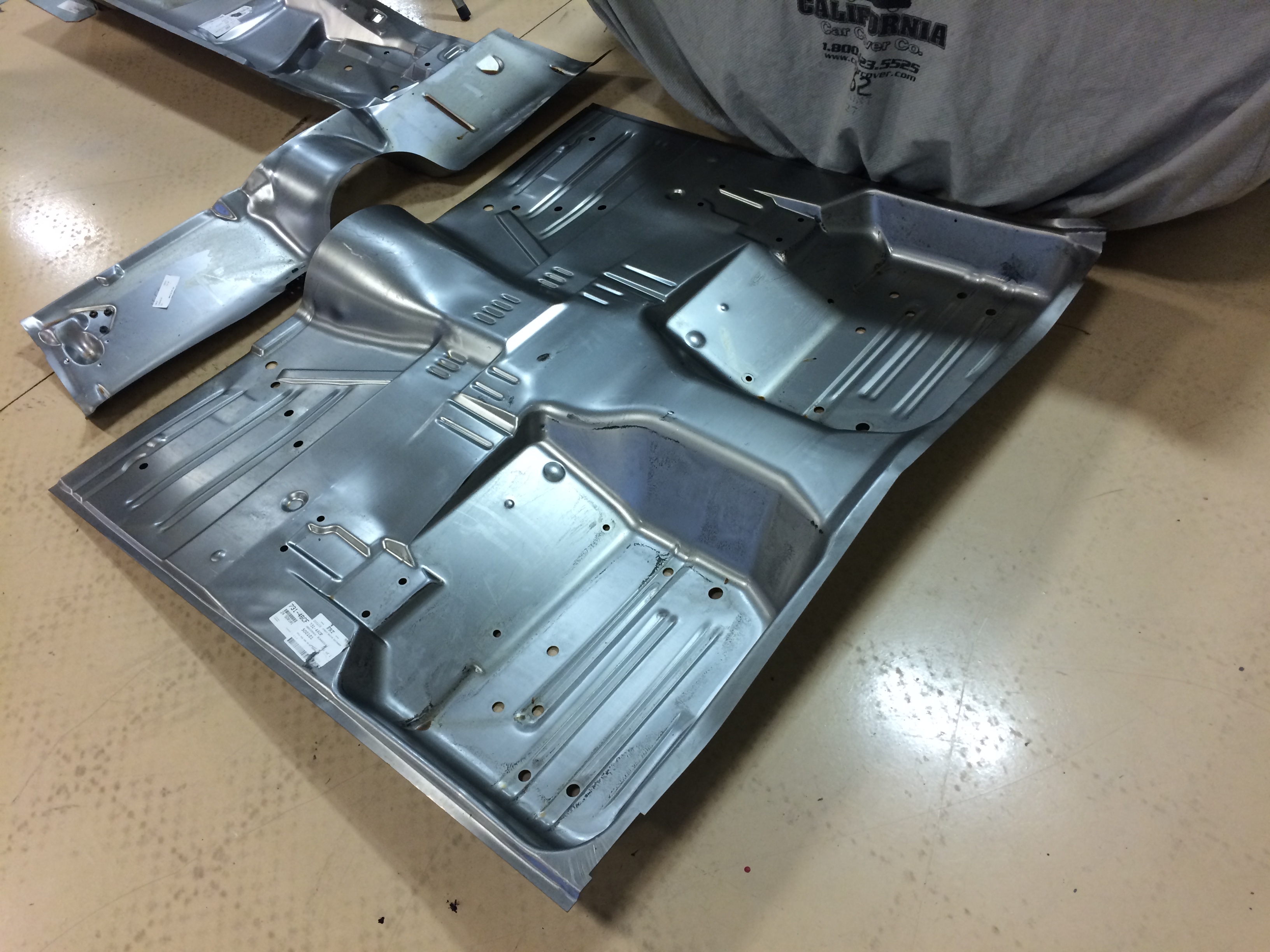 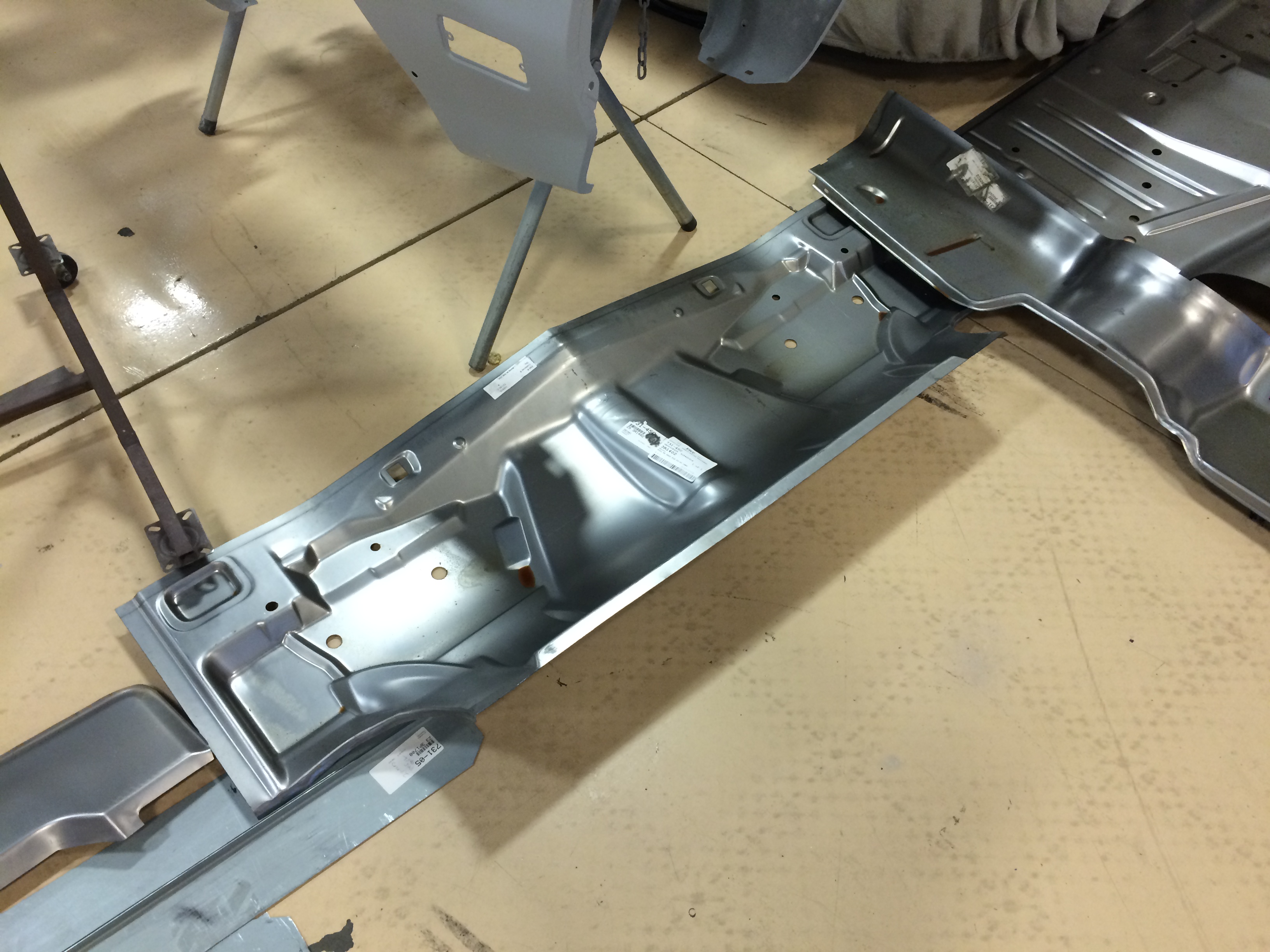 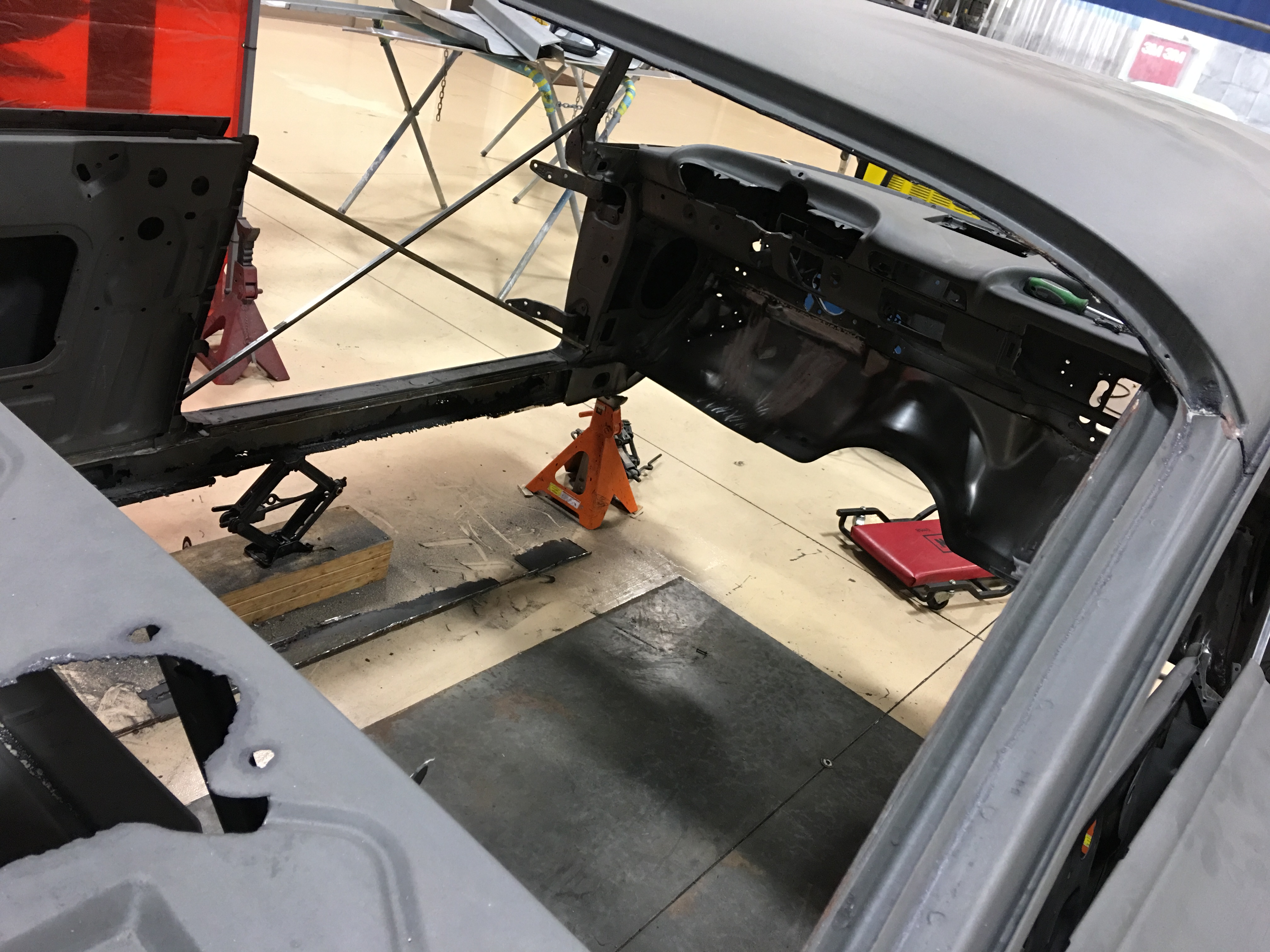 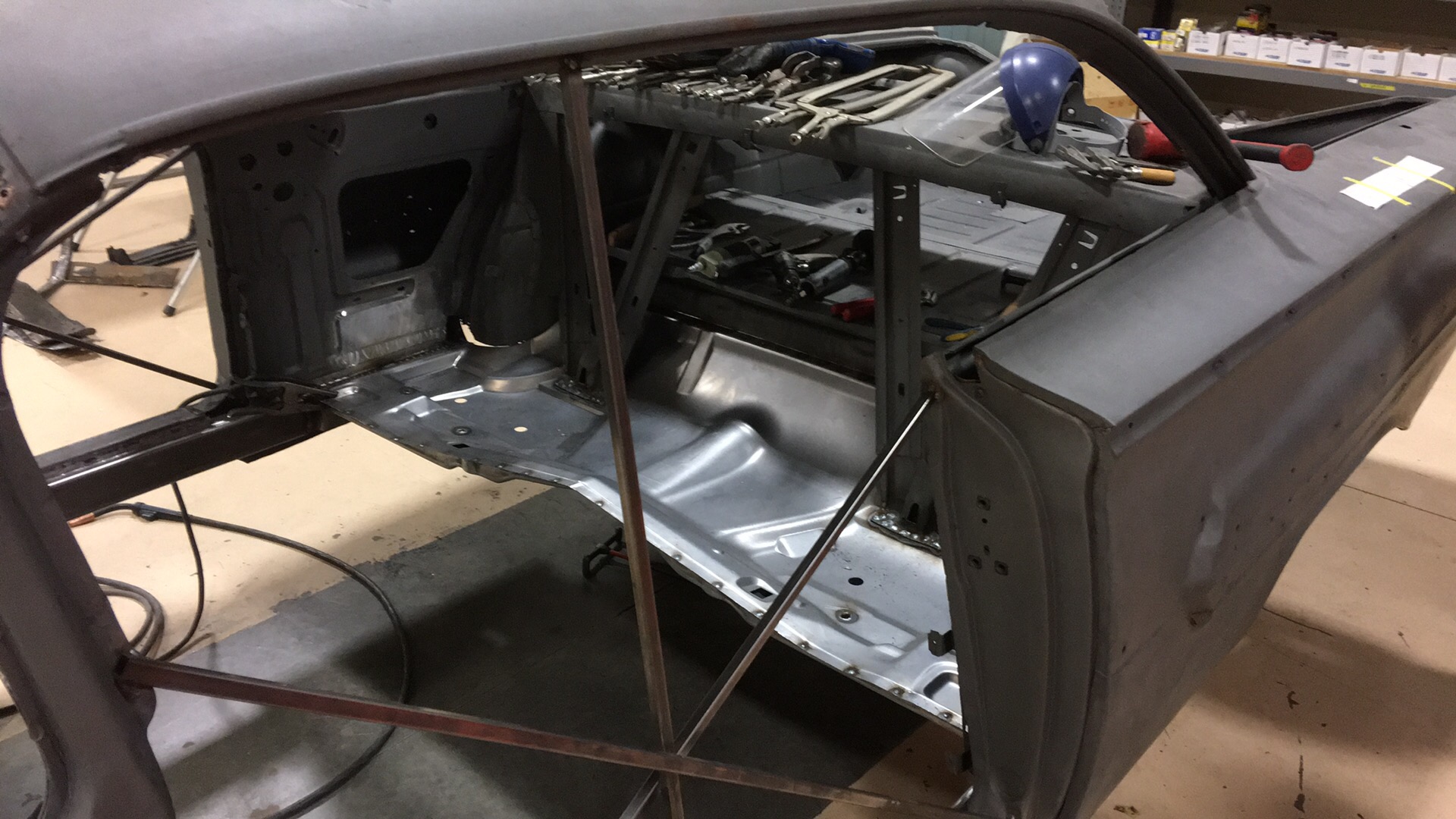 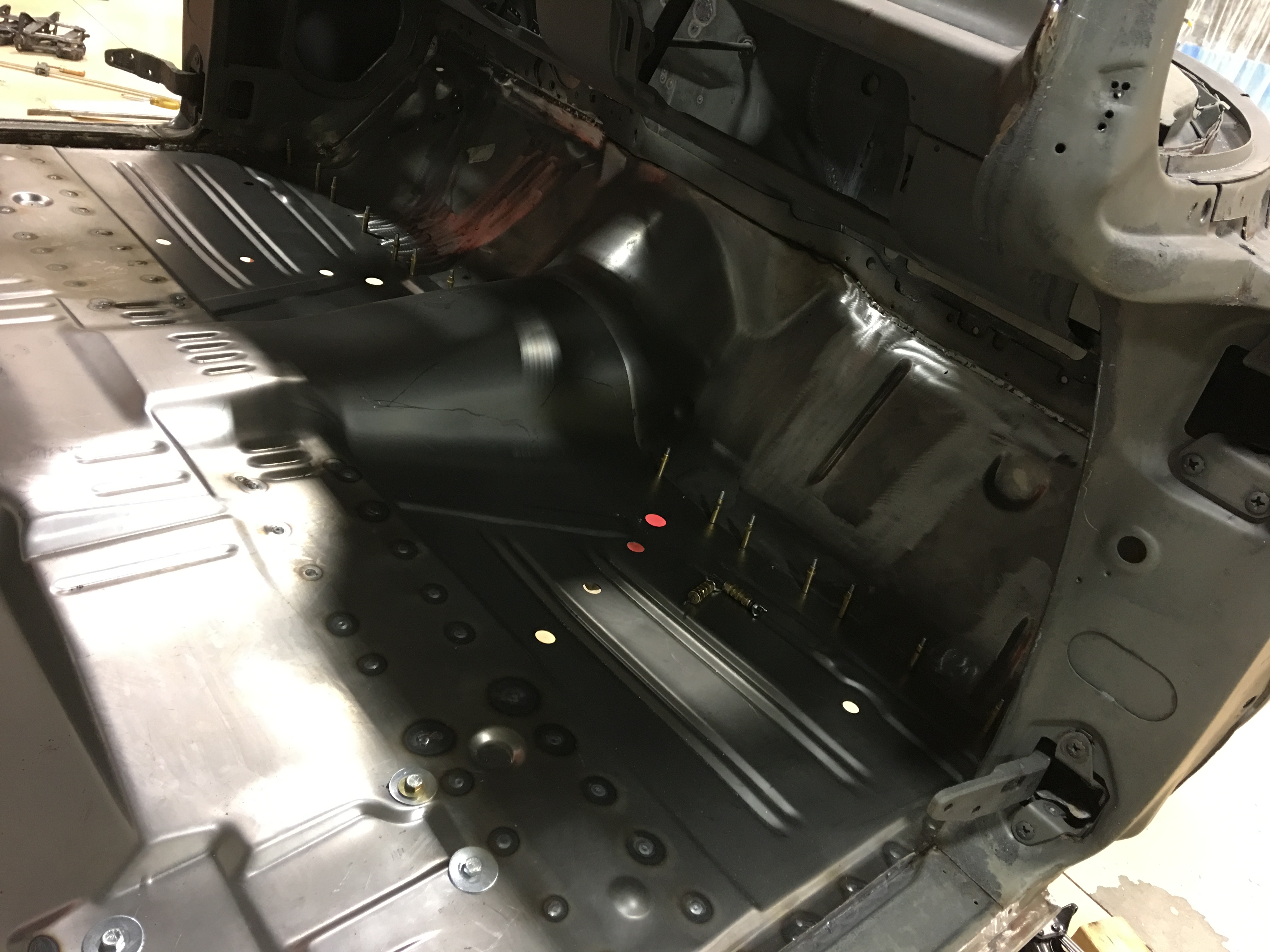 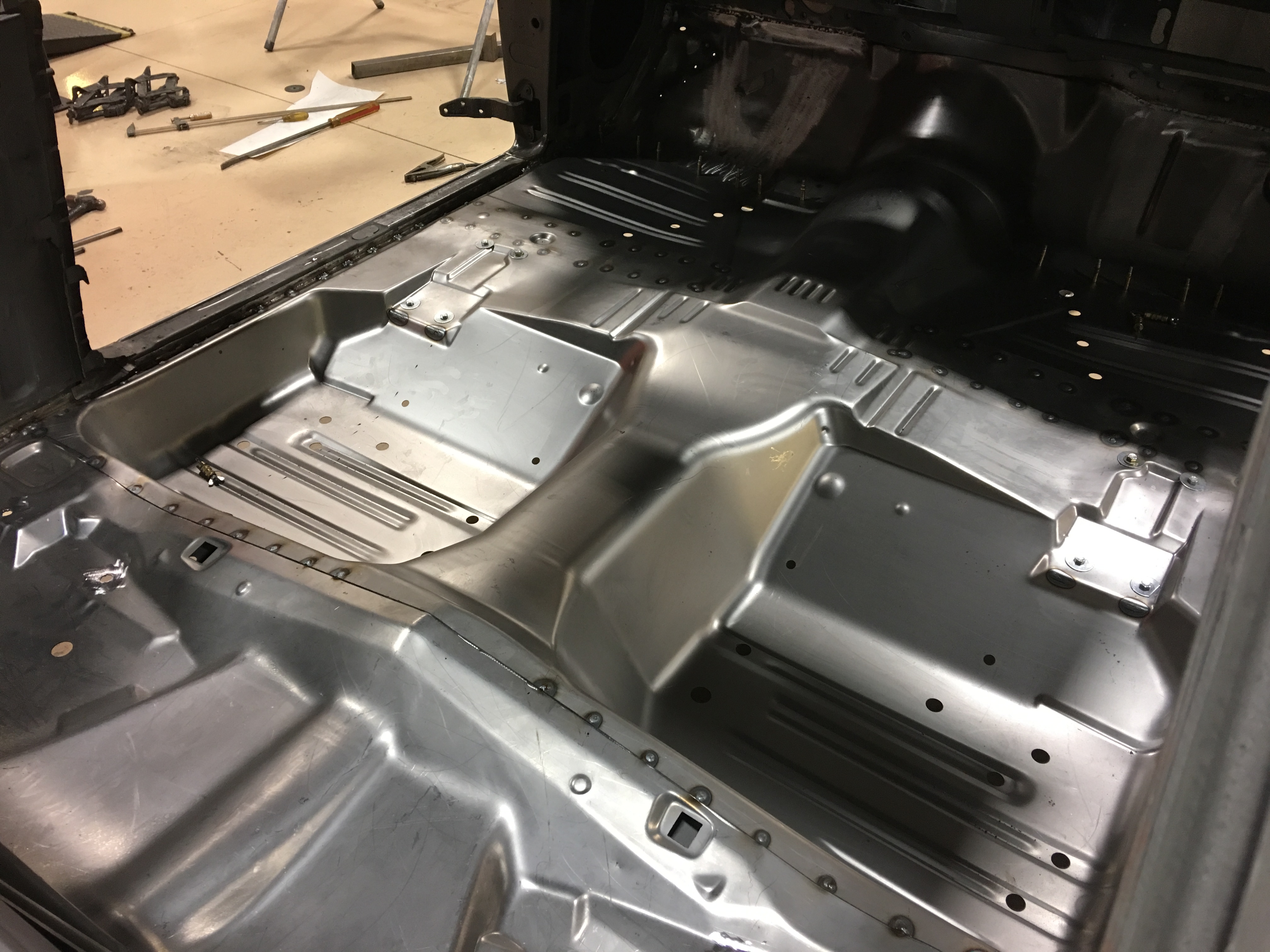 Now let’s talk structure. It’s a pointless endeavor to try welding up new floorpans if you don’t have anything to weld them to. You’ll notice in our Deconstruction write-up that this Chevy’s inner and outer rockers were both severely rotted. Replacing outer rockers? Easy. Replacing inner rockers? That becomes a tricky endeavor. Most shops just take factory-spec replacement steel and seam it up the middle. That’s an okay fix, but, the industry has learned quite a bit about structure in the almost 60 years since this Impala growled off the assembly line. Since the car was originally an X-frame beast, those seamed rockers were the only side support it had; meaning, during a crash, the structure tended to fold significantly. Because safety is always a top priority at the RKM Performance Center, we wanted to find a better solution. That led to Fab Manager Darell Johnston fashioning 3.5 x 3.5-inch boxed steel into new inner rockers. 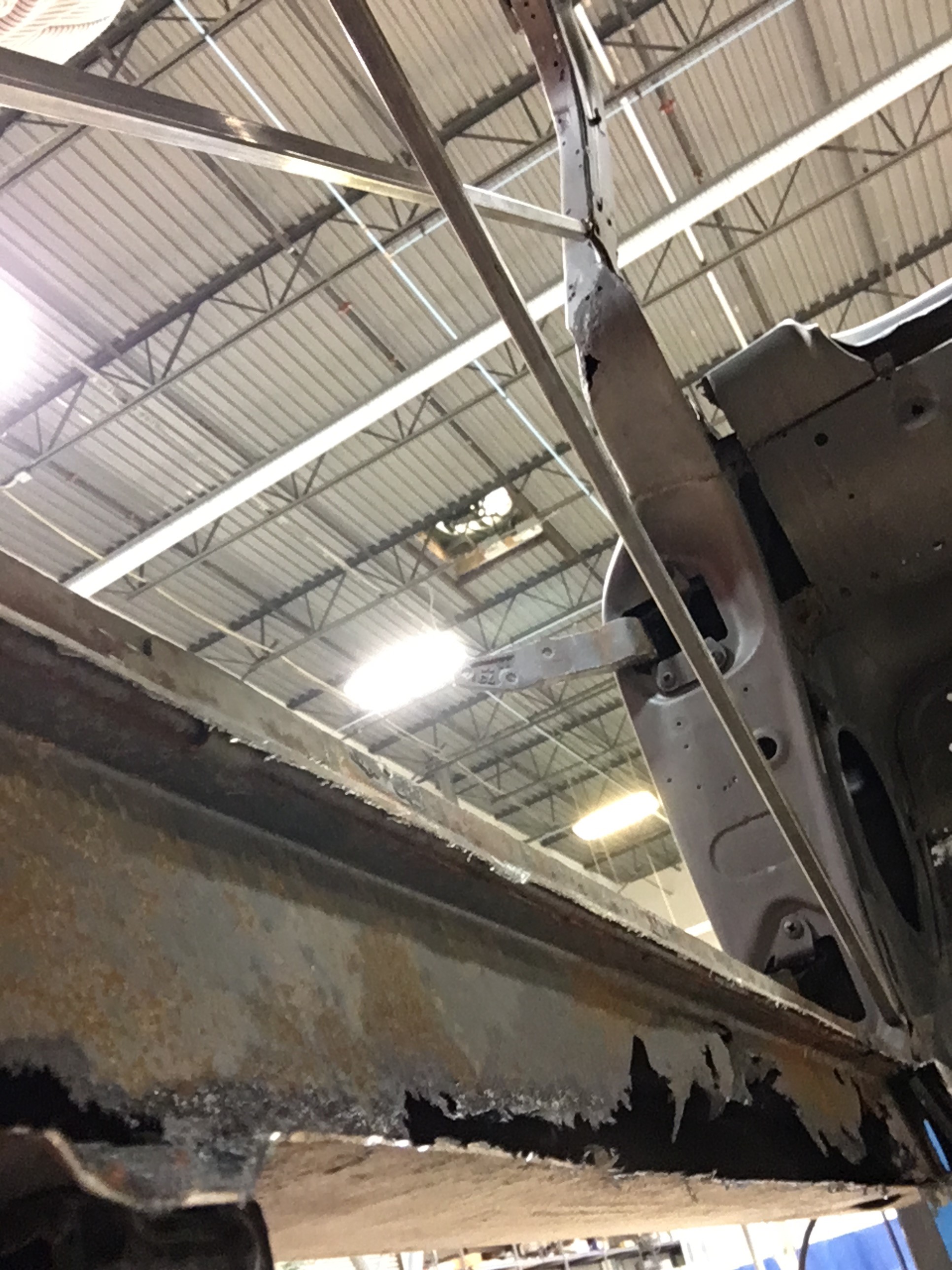 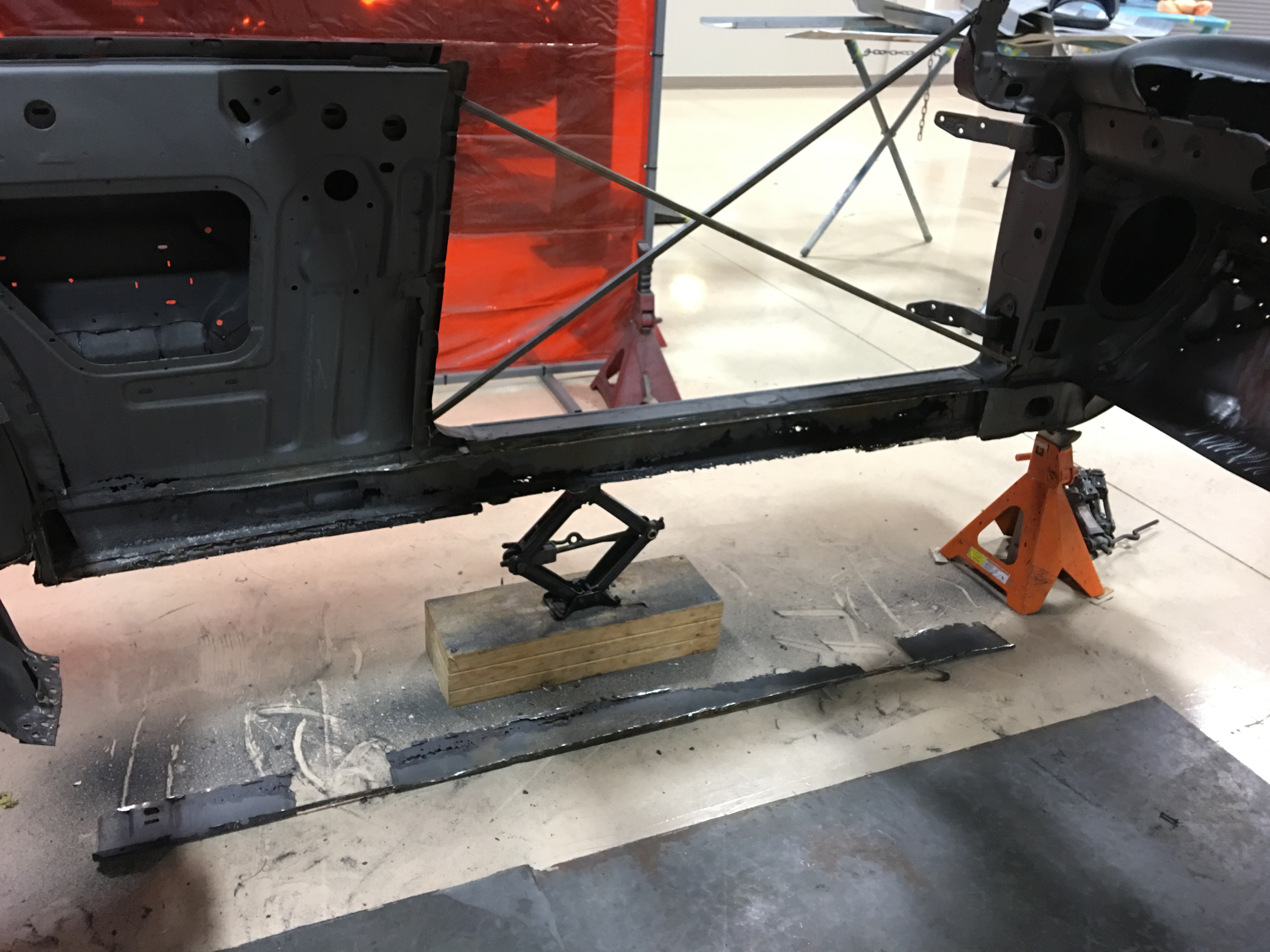 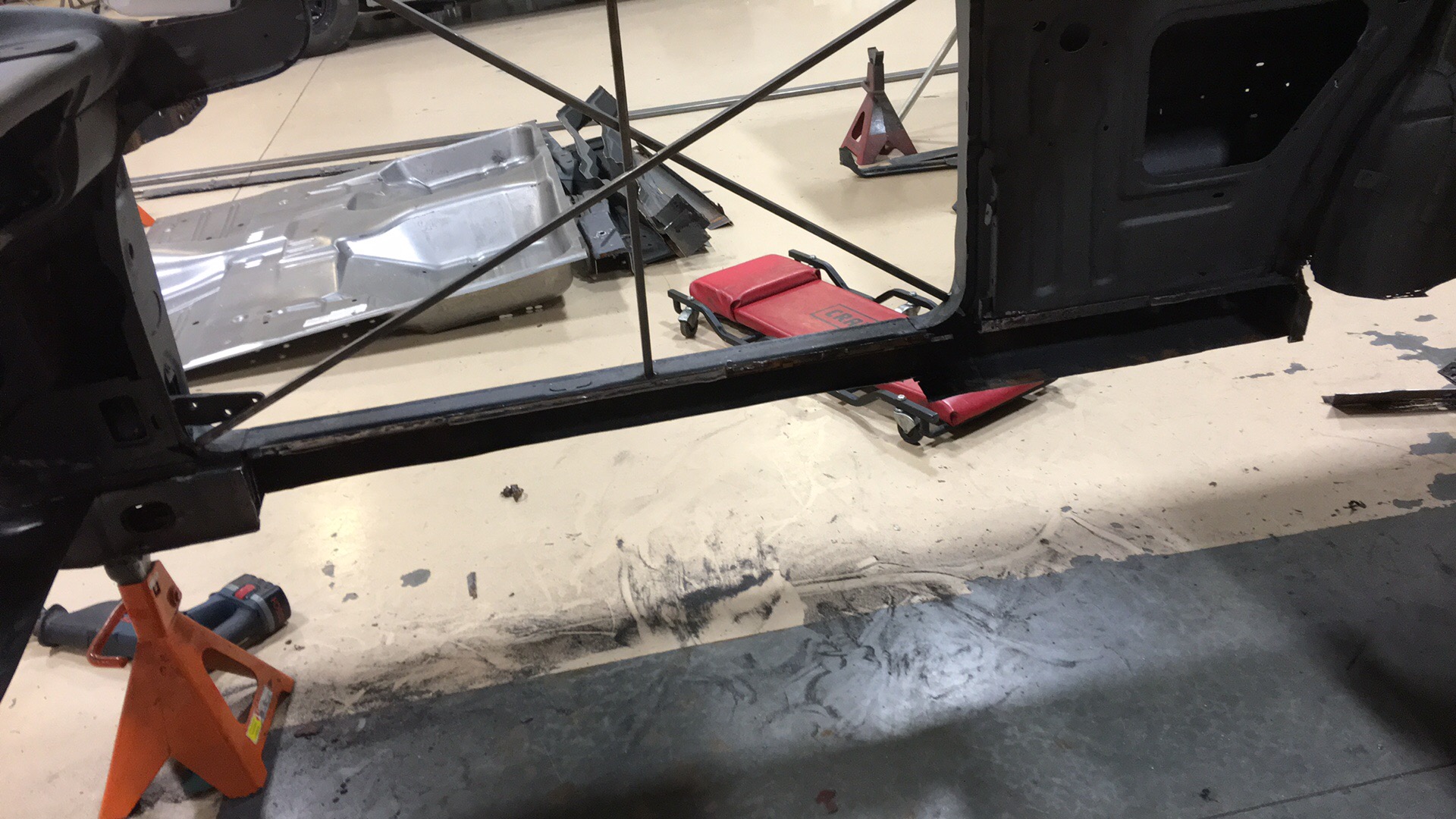 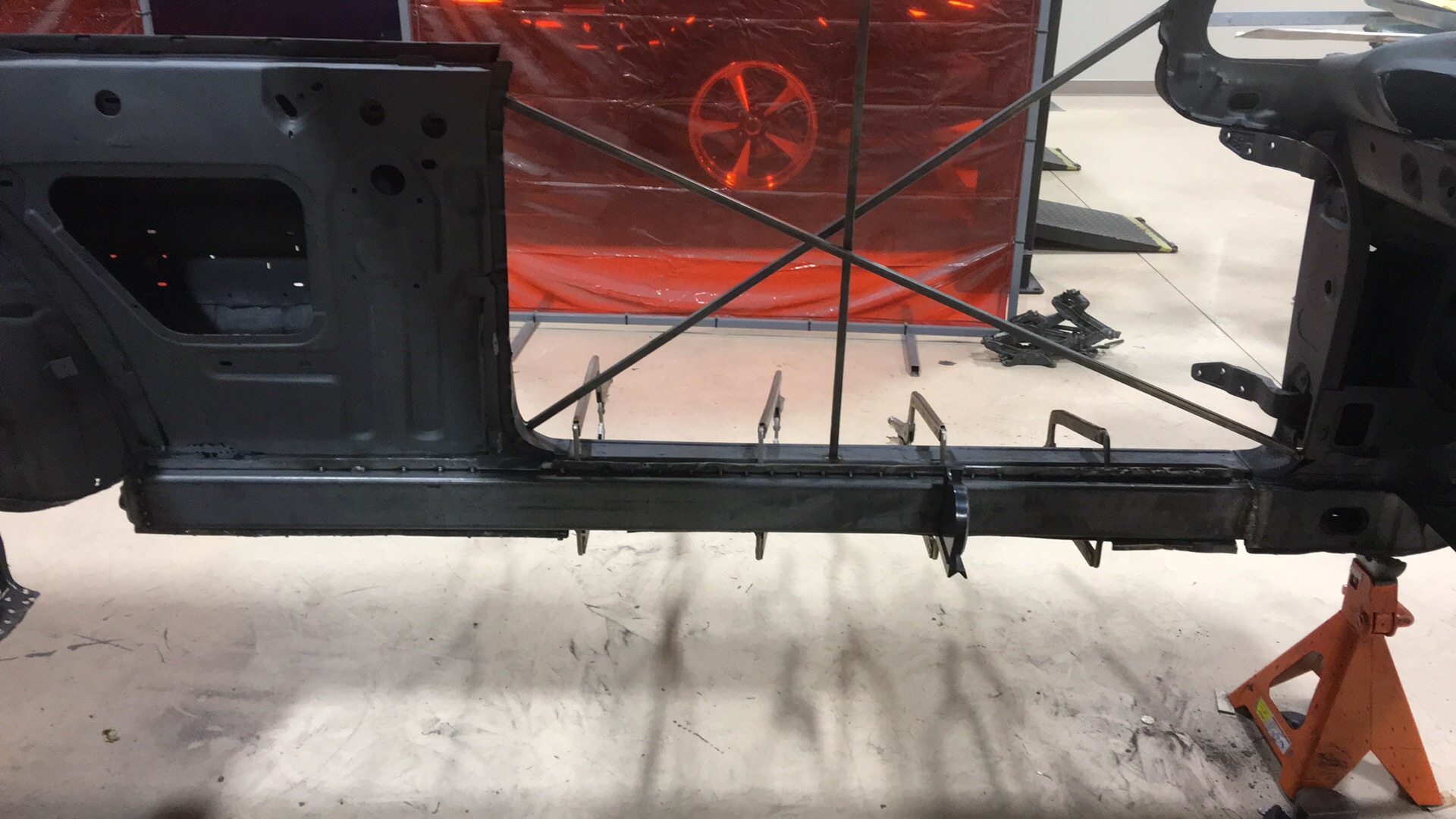 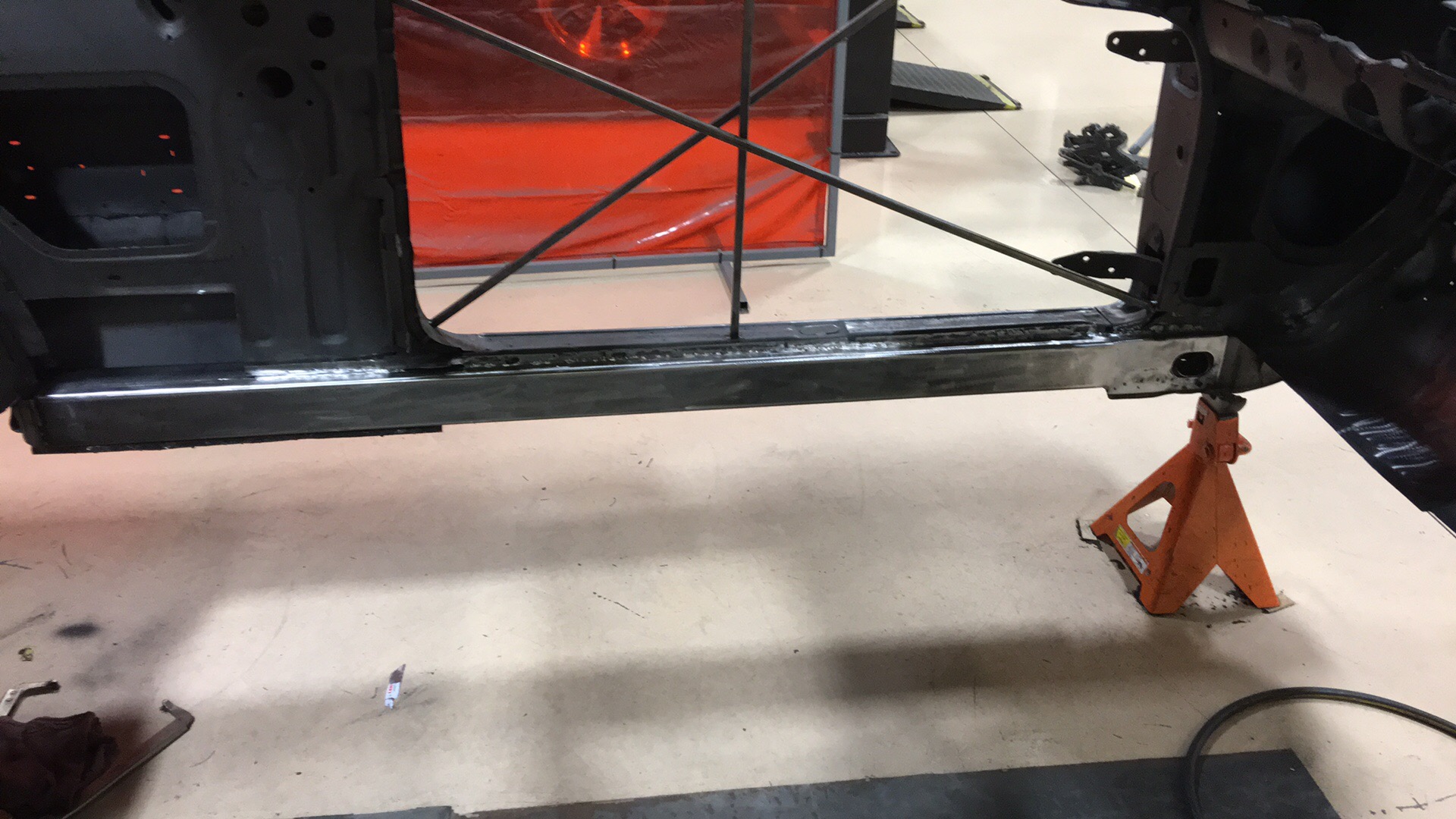 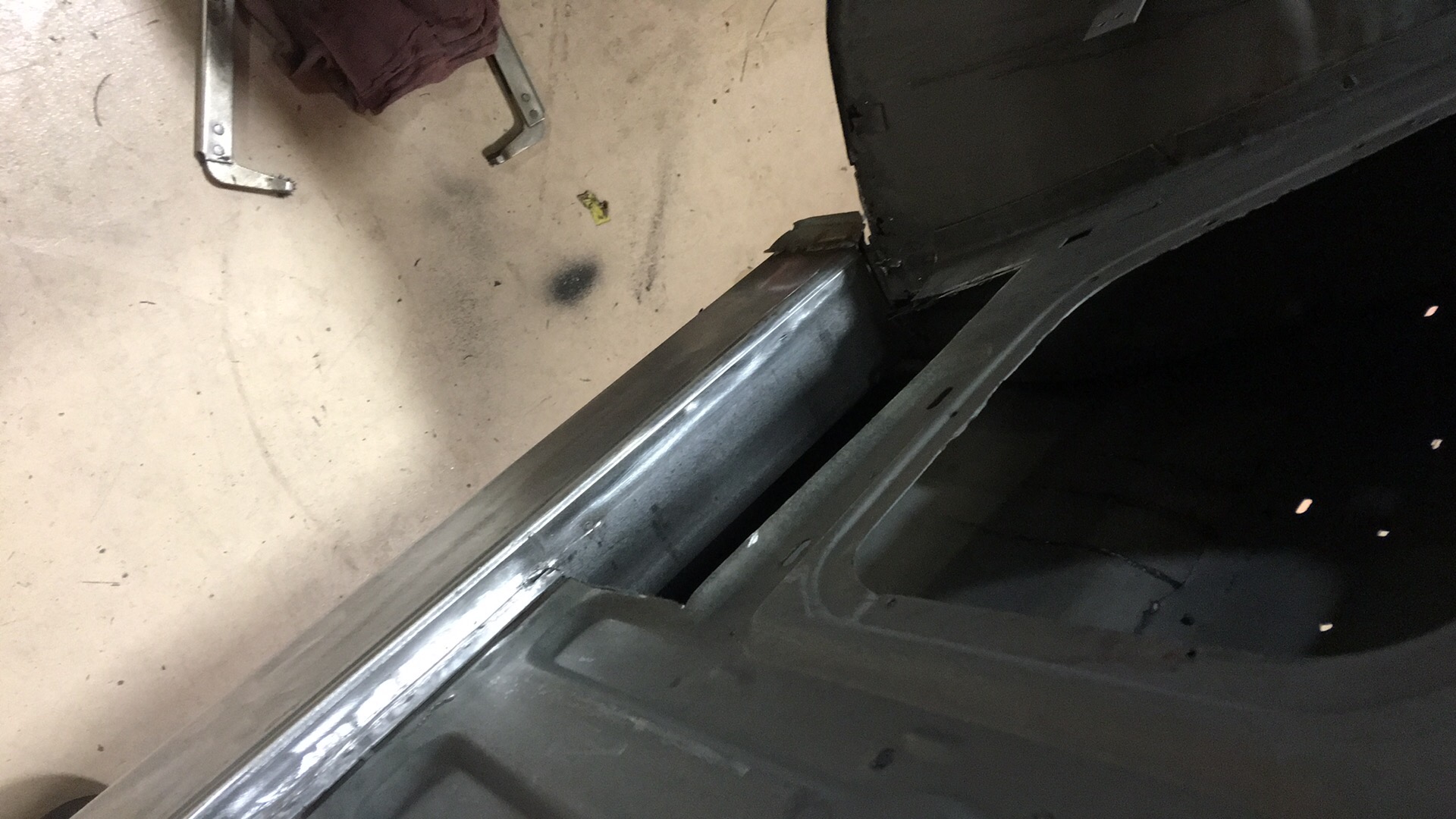 Is .88 wall steel a bit of overkill? Maybe, maybe not. But two things are certain: 1) Structurally, this Impala is destined to be solid for decades to come. And 2) in the event of a crash, it’ll keep the occupants much safer than a traditional factory set-up. The added rigidity of boxed inner rockers also helps the integrity of the car’s profile. As you can see from our photos, the new tubes support both the firewall and the rear inner fenders thanks to custom-fabricated corner pieces. Naturally, those beams were capped with fresh outer rockers, which we trimmed and welded solid (as opposed to factory-style crimp welds). And with the car squared and adorned with outer rockers, a trimmed floor pan brace was butt-welded between the inner rockers. 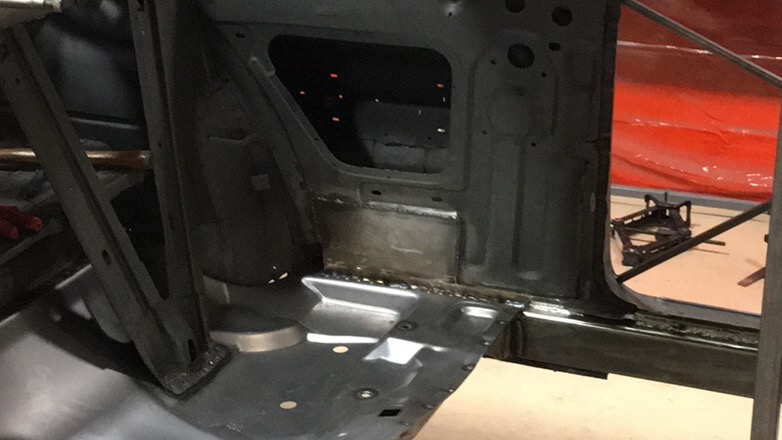 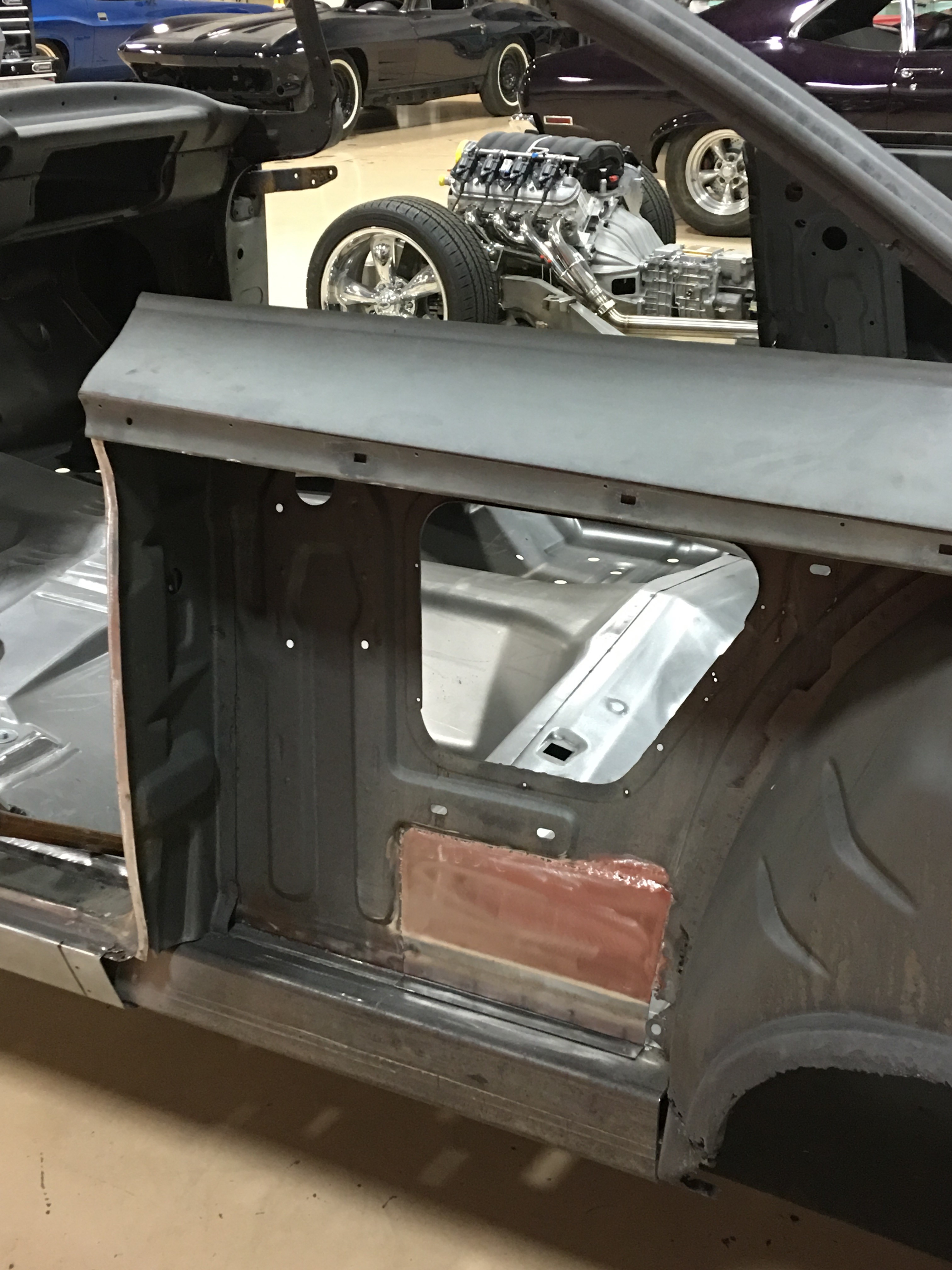 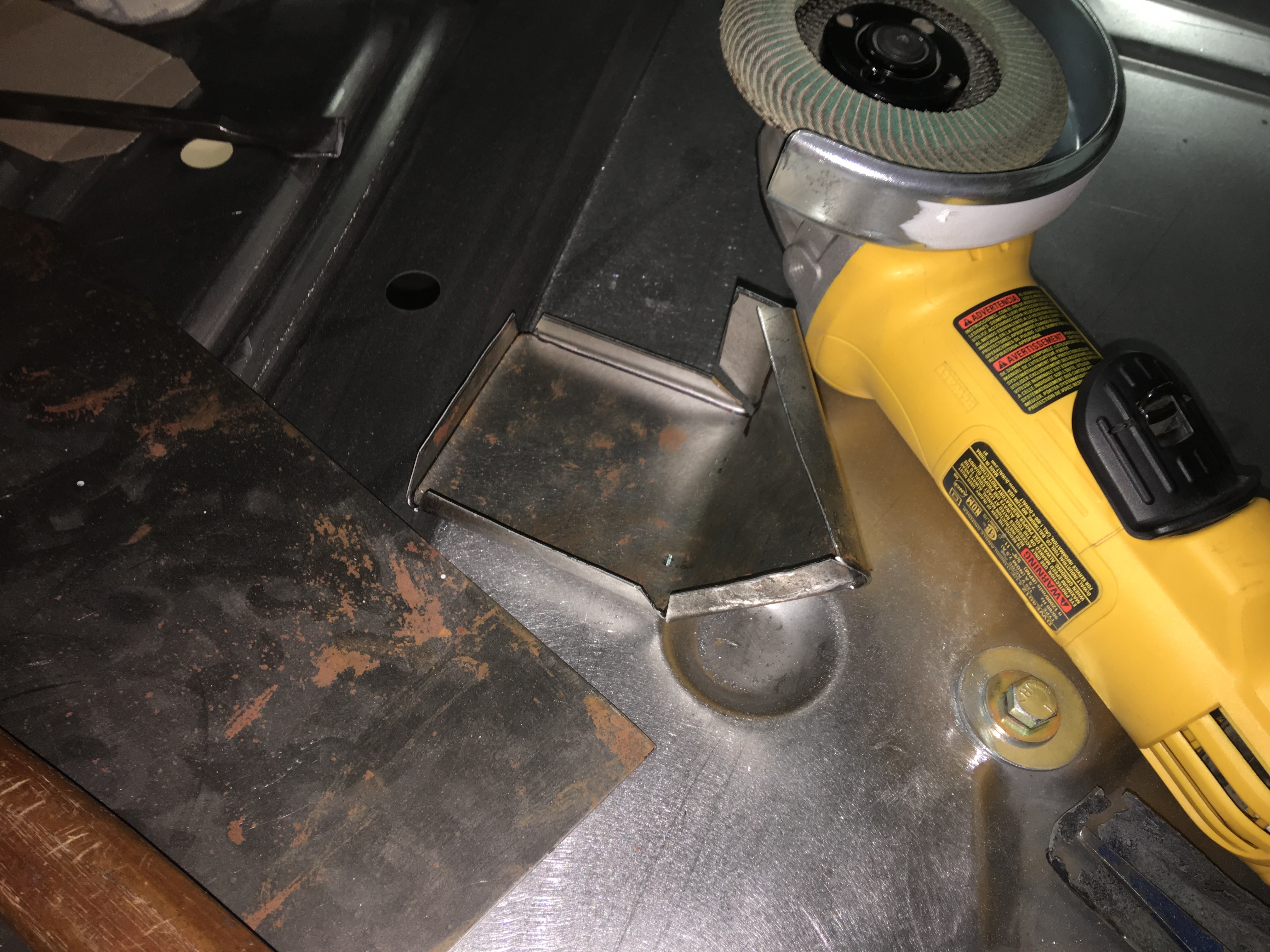 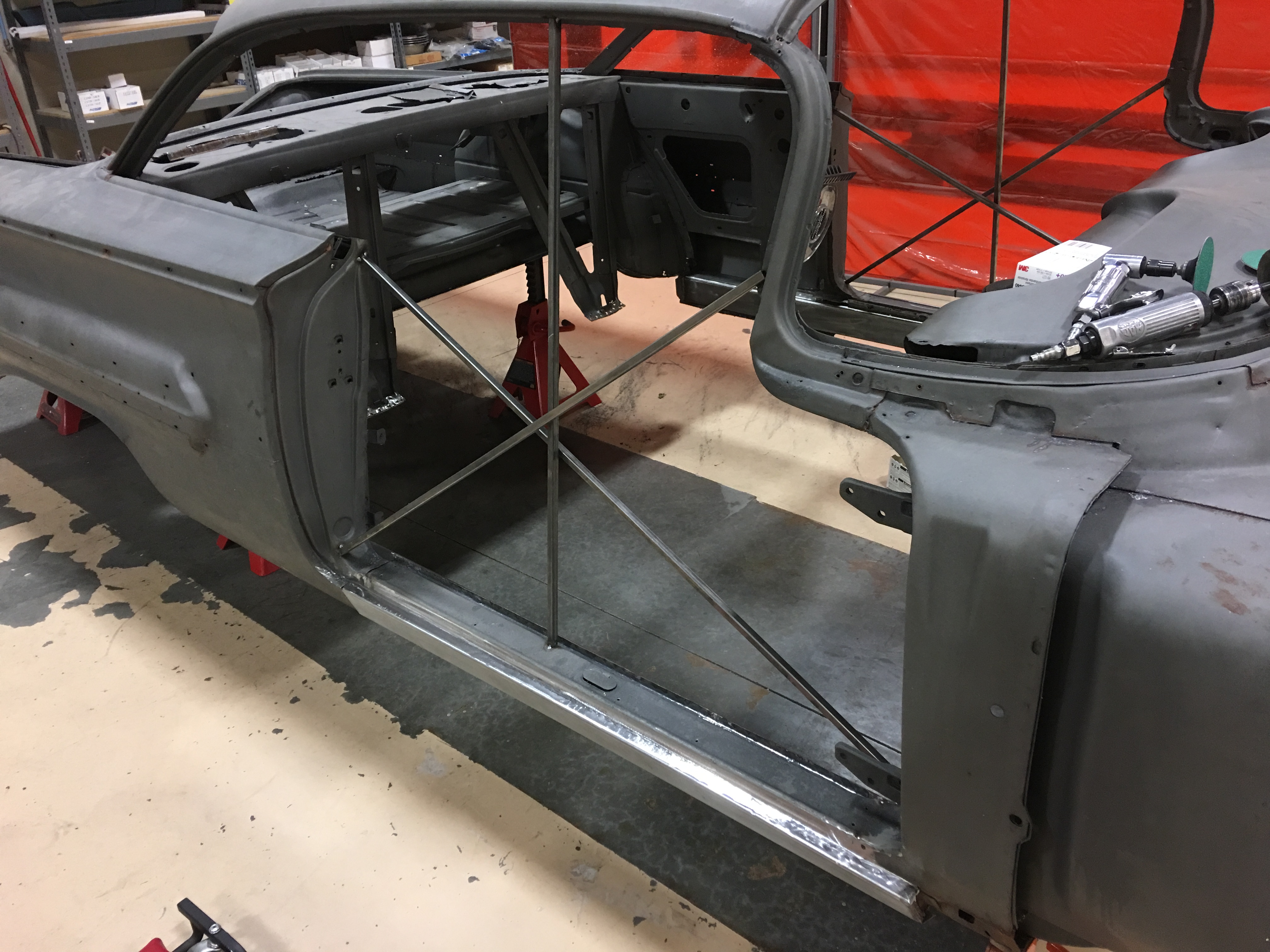 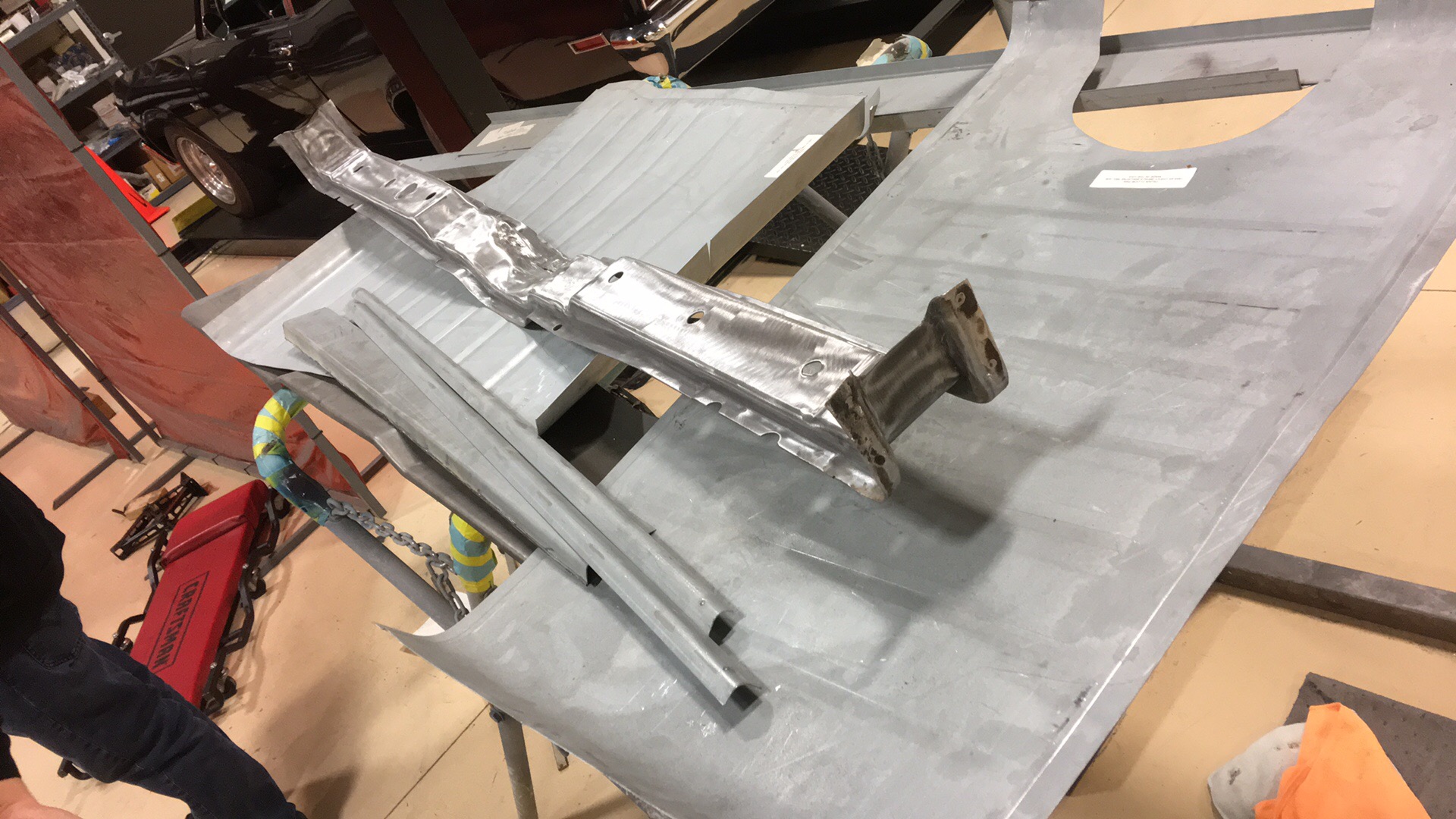 Seventeen hundred words, days of labor and a nice sum of money, and we’ve just begun reviving this awesome Chevy. Join us next time as we continue the Fabrication process with the most problematic area of the car: its positively massive trunk.