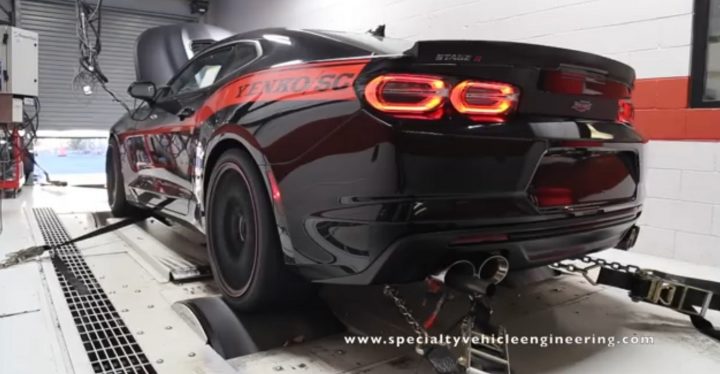 Speciality Vehicle Engineering (SVE), which is based out of New Jersey, has made a name for itself by reviving the iconic Yenko name for a series of specially tuned, limited-edition GM vehicles. The company is upping the ante in the New Year, laying out plans this week to release a new 2022 Yenko/SC Chevy Camaro Stage II producing an eye-popping 1,100 horsepower.

Details on the 2022 Yenko/SC Chevy Camaro Stage II are slim at the moment. We expect it to feature an upgraded version of the 6.2L LT1-based engine that powered the 2021 Yenko/SC Camaro Stage II, though, which featured a 416 cubic inch (or 6.8L) blueprinted LT1 block and a massive supercharger, among other upgrades, resulting in an impressive output of 1,050 horsepower.

The company also recently shared a short clip of the first customer 2022 Yenko/SC Chevy Camaro on the dyno at its shop prior to delivery to Don Schumacher Chevrolet in Danville, New Jersey. That vehicle featured a gloss black exterior with red Yenko/SC graphics, Yenko-branded Chevy bowtie emblems and a ‘Stage II’ rear lip spoiler badge. It also shared a photo of a separate example on its Twitter page, which looks to be based on an Arctic White 2022 Chevy Camaro LT1 and features blue graphics and multi-spoke aftermarket wheels.

Specialty Vehicle Engineering built just 50 examples of the 2021 Stage II Yenko/SC Chevy Camaro, and we expect a similar limited production run for this new 2022 model. Customers can place an order for an SVE/Yenko vehicle through their local Chevrolet dealer, with the company also offering upgraded versions of the Chevy Silverado 1500. Prices for the 2022 Yenko/SC Chevy Camaro Stage II are not yet available.