Yeah, the Chevrolet Blazer inspired the design of the second-gen Bronco. So did the 1955 Chevrolet Nomad 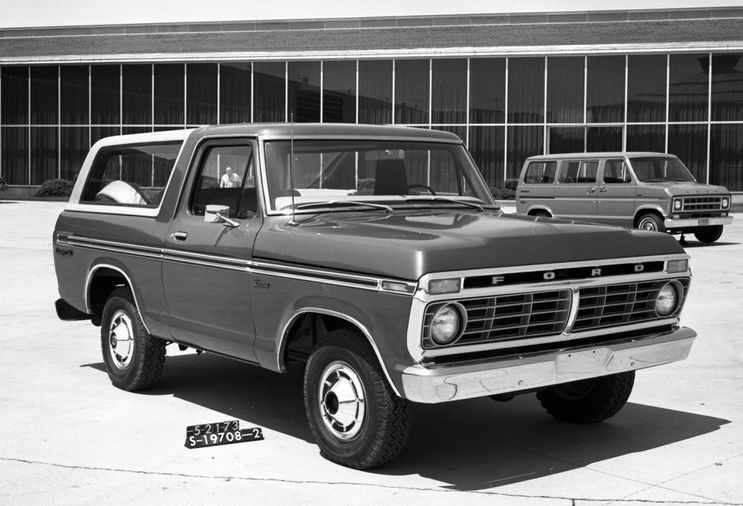 "The one thing I was concerned with was that I didn't want it to look like the Blazer," Dick Nesbitt said of his designs for what eventually became the full-size second-generation Ford Bronco. "That was a challenge to do."
Which is not surprising, given that the design brief that Ford's Product Planning department issued to the Light Truck and Tractor studio sometime in late 1972, according to Nesbitt, was "very much" patterned after the Chevrolet Blazer. "Its sales were strong when it first came out and just kept going," he said. "It was just a matter of time before Product Planning decided to do the same thing and use the full-size pickup truck's sheetmetal for the Bronco."
Just not right away, though. The earliest sketches for the first-generation Bronco's replacement started to go up on the studio's walls in the summer of 1971, a full two years after the release of the Blazer, and the subsequent design process explored many different variations on the sport-utility theme that didn't require shared sheetmetal. Nesbitt, who didn't transfer over to the light truck studio from the Lincoln-Mercury studio until 1972, had no involvement in that 1974-targeted redesign, but arrived just in time for the edict from Product Planning. (Designer Dale Berg, who died in December 2018, had worked on the earlier redesign effort.) 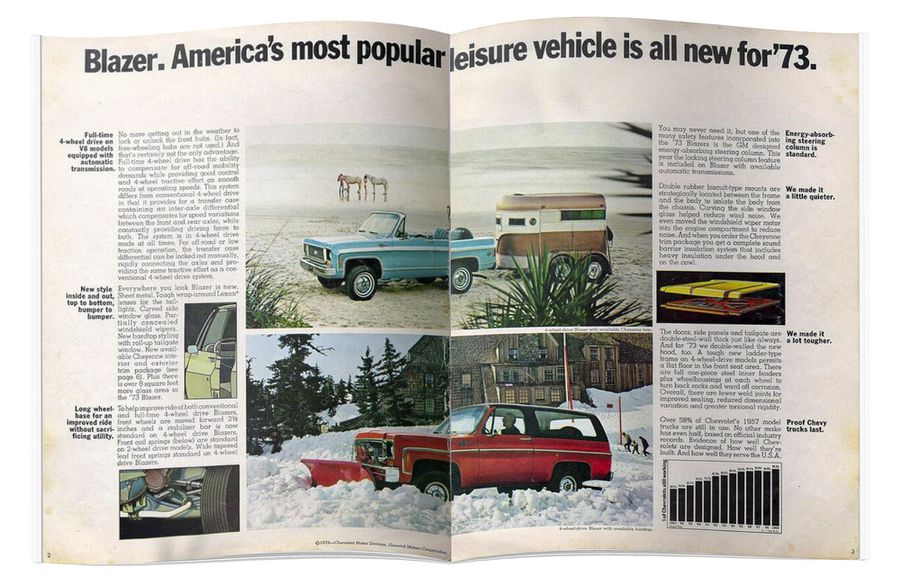 1973 Blazer brochure, courtesy OldCarBrochures.
In addition to requesting that the second-generation Bronco—now planned for 1976—share full-size sheetmetal, Product Planning also specified four variations on the theme, according to Nesbitt. The first, code-named Shorthorn, would simply be a two-door sport-utility patterned after the Blazer. The second, the Longhorn, would be a long four-door patterned after the Suburban, another segment Ford had envied. Another, code-named Midhorn, also had four doors but on a shorter wheelbase. Intriguingly, a fourth, the Widehorn, was supposed to be a two-door sport-utility 6 inches wider than a stock Ford F-100. "I'm not clear what their intentions were with the Widehorn," Nesbitt said. "It would've been similar to the Raptor, as it turned out later on."
The five designers in the studio—Nesbitt, Berg, Skip Wells, Jeff Ayres, and Dave Royer—all went to work on each of the four variations. According to Nesbitt, the others all designed Shorthorns more or less similar to the Blazer. They also worked under one other restriction from Product Planning: No full removable hardtop like the Blazer's. GM whacked the window frames from the full-size pickup doors to maximize the open-air experience with the hardtop off, but that in turn created problems sealing the windows against the hardtop. "Ford didn't want to go into that," Nesbitt said. "So we had to have a full steel top and unaltered F-series doors. The removable roof would only be over the rear area." 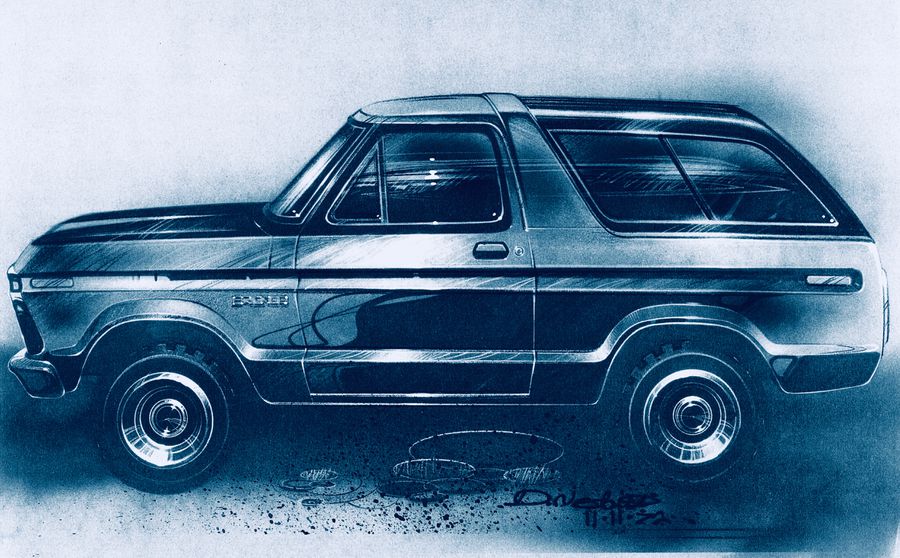 Dick Nesbitt Shorthorn renderings, November 1972.
Rather than see that as a limitation, Nesbitt decided to make the area just aft of the doors and above the beltline into a feature. He had already developed a wide B-pillar and long expanse of parallelogram windows for the Carrousel proto-minivan that he was rendering for Hal Sperlich at about that time. Those two features, he said, came almost directly from the 1955 Chevrolet Nomad, and he thought they would work well on the Bronco.
"I'd always liked the Nomad," he said. "I had little room to work with, so I thought the parallelogram windows would help differentiate it from the Blazer more than anything and give the Bronco a strong visual identity."
(Side note: Even though Nesbitt completed the final renderings for the Carrousel and Shorthorn within a month of each other and even though the renderings shared similar features, he said they arose from two separate programs. "I really had a thing for wide B-pillars then," he said.)
In one rendering, he included a small window in that space behind the doors, something like what Nissan would end up doing with the Eighties two-door Pathfinder. In a couple others, he introduced a roof band that wrapped over the cab, evoking an aftermarket light bar mounted in a pickup bed. Product Planning enthusiastically approved that latter treatment, he said, leading his Shorthorn design to become the standard not just for the second-generation Bronco designs that followed but for all of the succeeding generations of full-size Bronco. 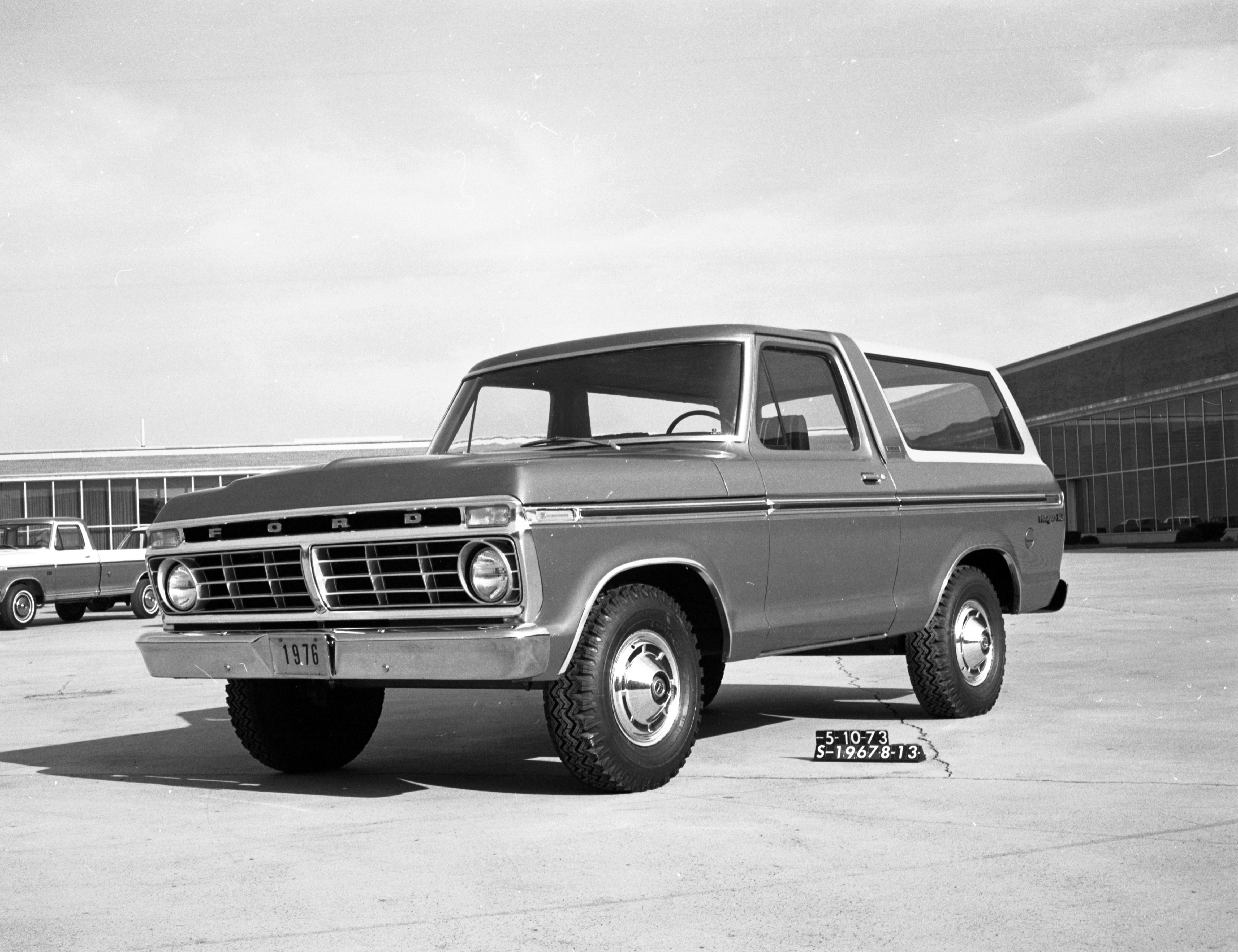 By mid-January, within a couple months of the finalization of his design, the light truck studio had full-size clays available for inspection. Because the sheetmetal and above-the-beltline designs were pretty much set in stone, all the designers had left was to hash out the details. 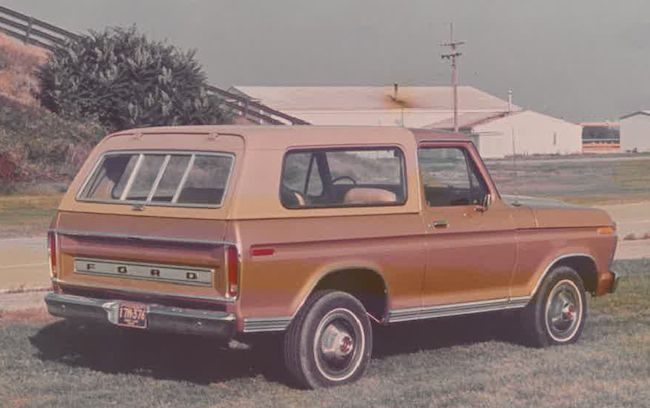 The Carron-built Shorthorn running prototype.
Over the next nine months or so, full-size clay after full-size clay emerged from the studio, though at one point during that time, George Petersen, the project development engineer for the Shorthorn, had Carron Industries in Inkster, Michigan, build a fully driveable prototype using a mix of F-series and Blazer components. 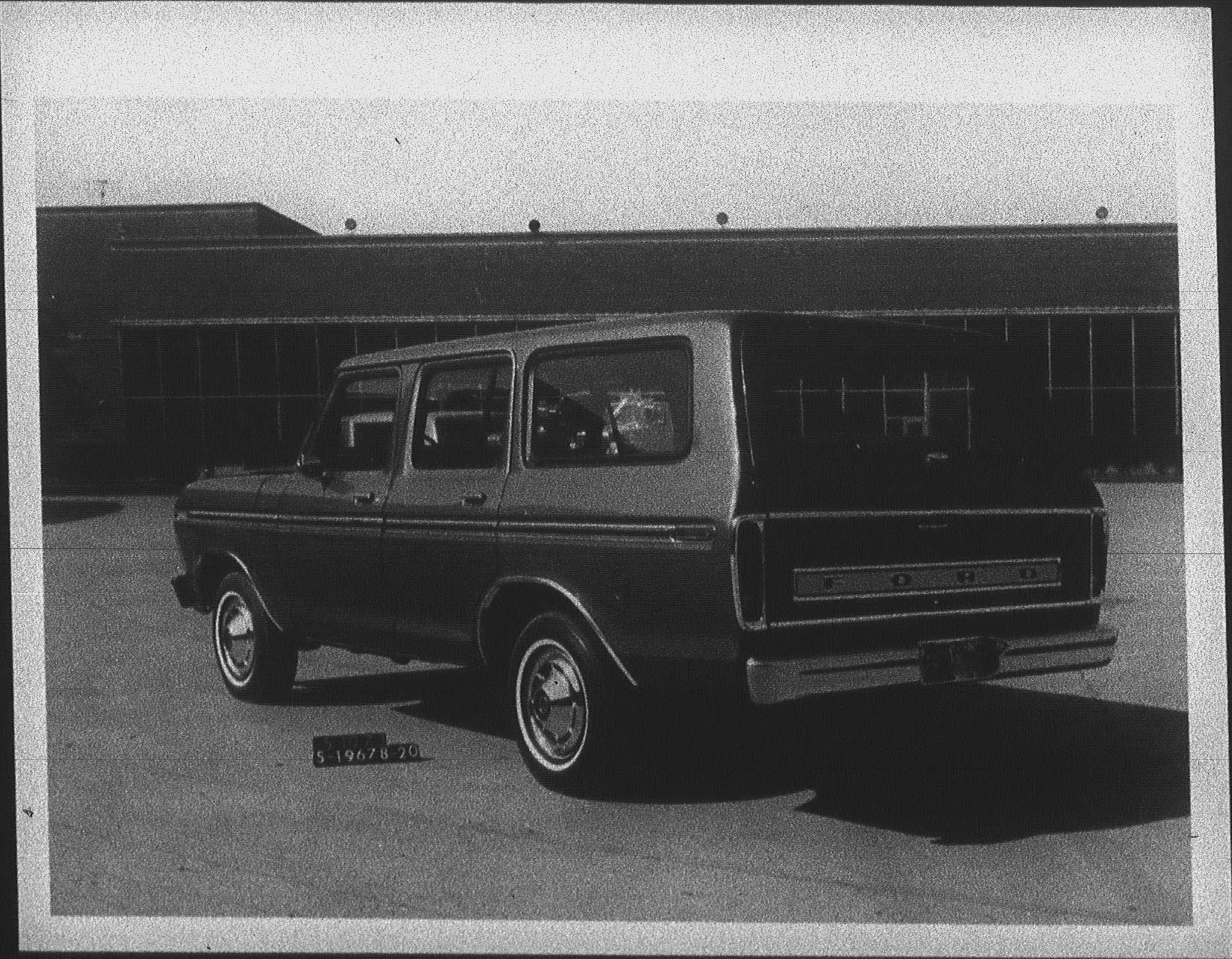 Midhorn clay model, May 1973.
In Ford Media's archive images, we even see a brief appearance of the Midhorn full-size clay—on one side rendered as a four-door; on the other side a two-door—alongside the Shorthorn in a May product overview. It's about the only evidence we've yet seen for the existence of the Mid/Long/Widehorns; according to Nesbitt, "a lot of that material went to world headquarters and never came back. I don't understand why they didn't pursue the Midhorn or Longhorn." 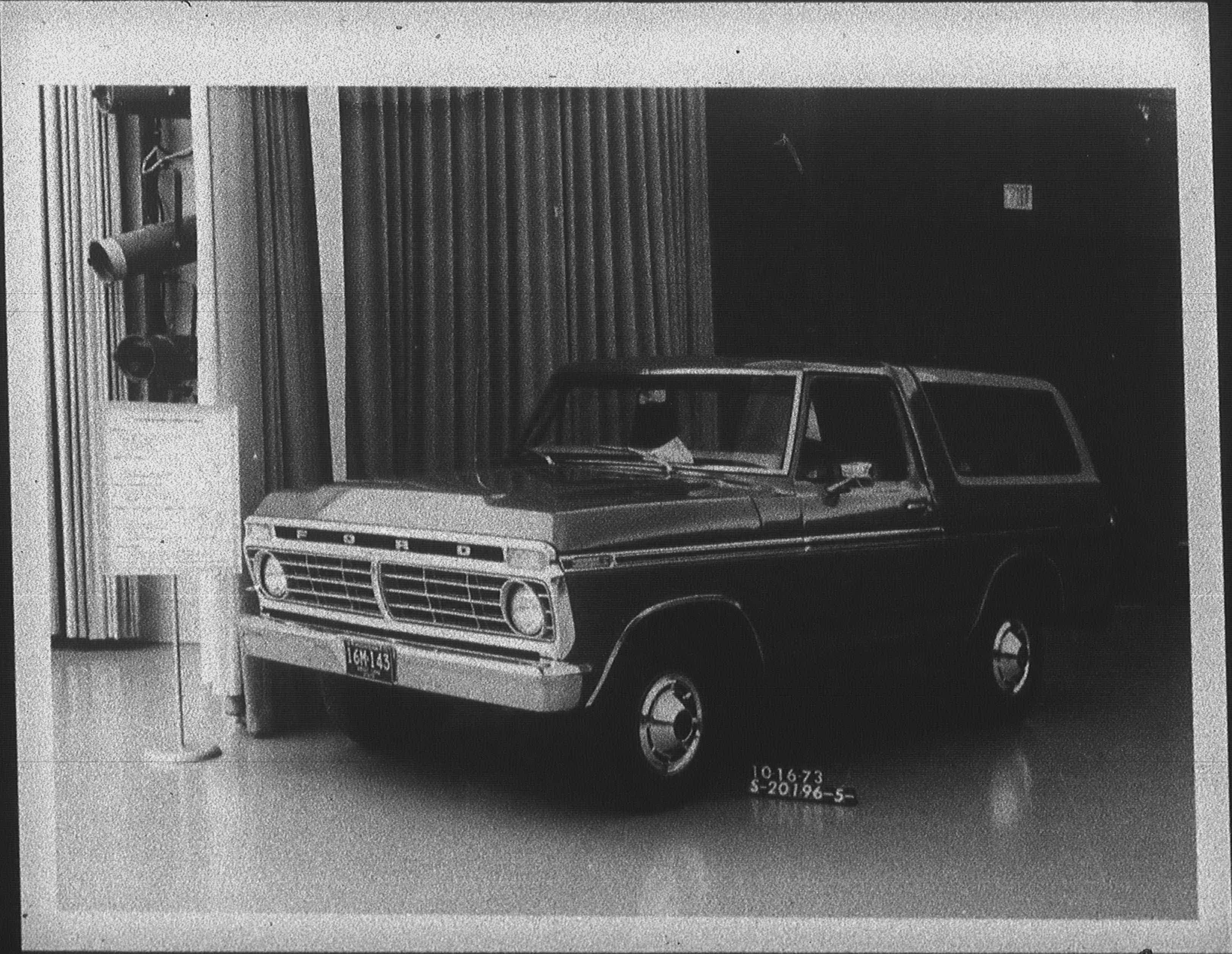 October 1973 Shorthorn presentation.
As opposed to the 1974 redesign, everything seemed on track for the 1976 redesign to proceed in October 1973, just when OPEC's embargo on oil exports to the U.S. triggered the first oil crisis. "They put it on the shelf because of the embargo," Nesbitt said. "It looked like it was on indefinite hold." 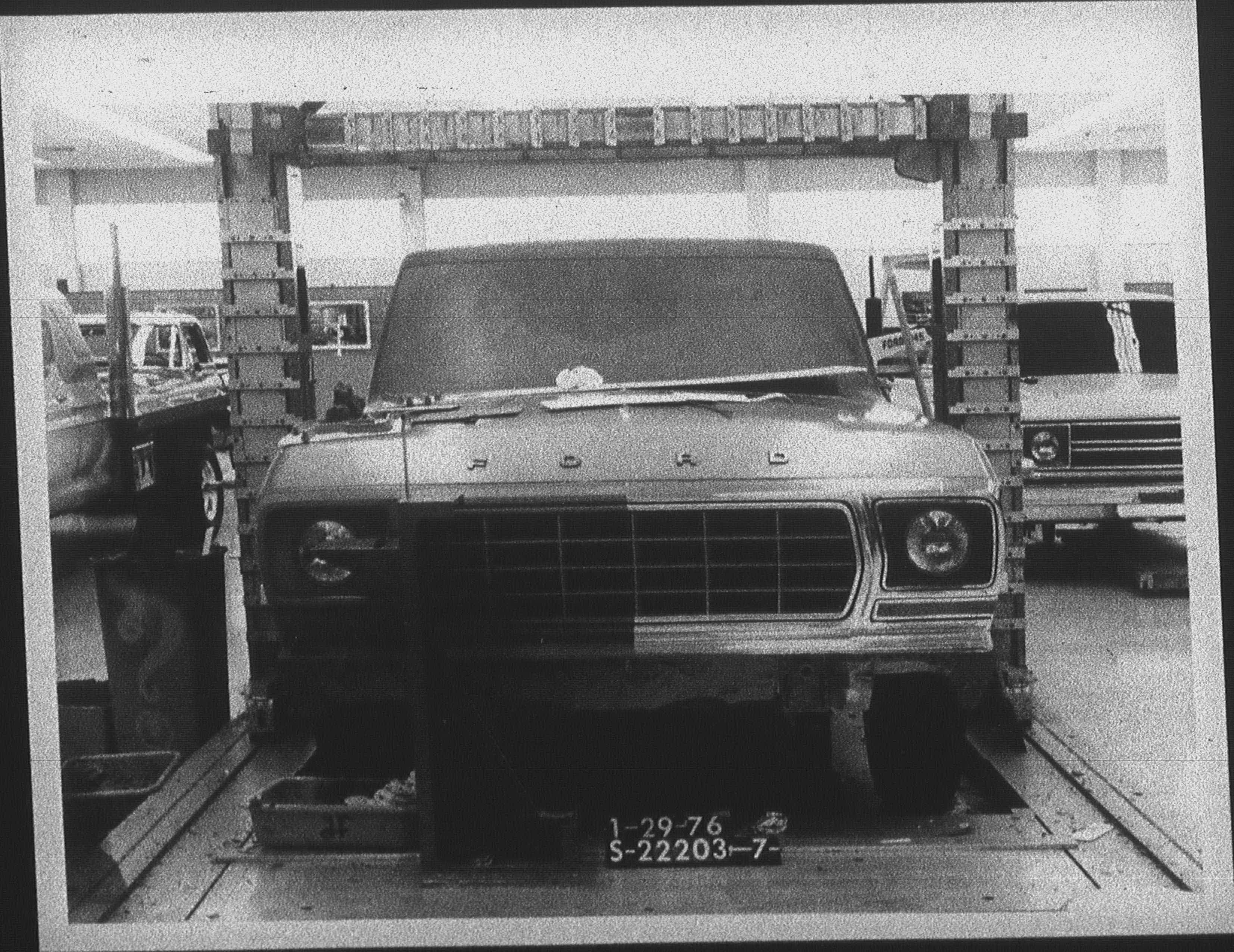 January 1976 Bronco clay modeling.
Some development work, particularly on the interior, proceeded through to early 1974, but it wasn't until January 1976 that work restarted on the Shorthorn, adapting it to the 1978 Ford full-size pickup's facelift. By then, Nesbitt had left Ford, first for Texas Instruments and then later for his own design firm.
SOURCE AND MANY MORE PHOTOS AT: HEMMINGS
← Go Back To List