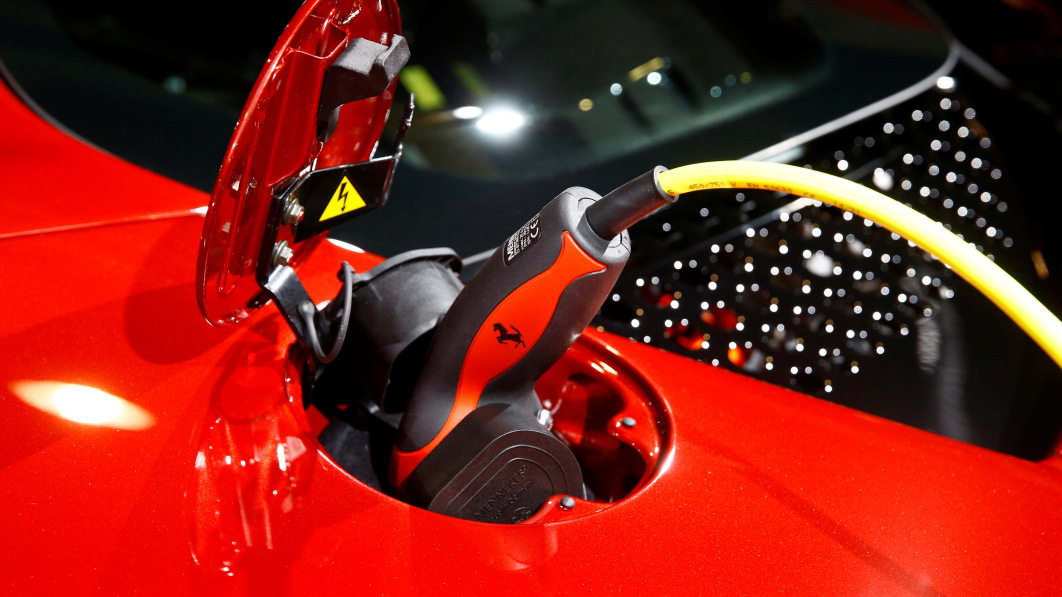 MARANELLO, Italy — Ferrari makes some of the fastest cars on the road, but the luxury Italian automaker is taking the slow lane to an electric future as it tries to overcome the technology's disadvantages against today's powerful fossil fuel engines.

At an investor day this month, executives promised a new era, with the first fully electric Ferrari in 2025.

But for now, combustion engines remain the noisy heart of what it does. Unlike some rivals, Ferrari has not provided a roadmap for going all electric. Volkswagen's Bentley brand and Volvo are both targeting 2030.

According to a source familiar with Ferrari's business plans, a new production line focused on electric vehicles (EVs) should help lift annual production at its plant in Maranello, Italy, by more than 35% to over 15,000 cars by 2025 versus 11,155 in 2021 — or 65 cars per day versus 46 currently — delivering higher profit margins in the process.

Its line-up could also grow to at least 17 models by 2026 from 12 today. But most new models will, at least initially, have a combustion engine — including its first SUV, the Purosangue, powered by its trademark huge 12-cylinder engine — though some may be hybrids.

Ferrari currently has four plug-in hybrids in its lineup. 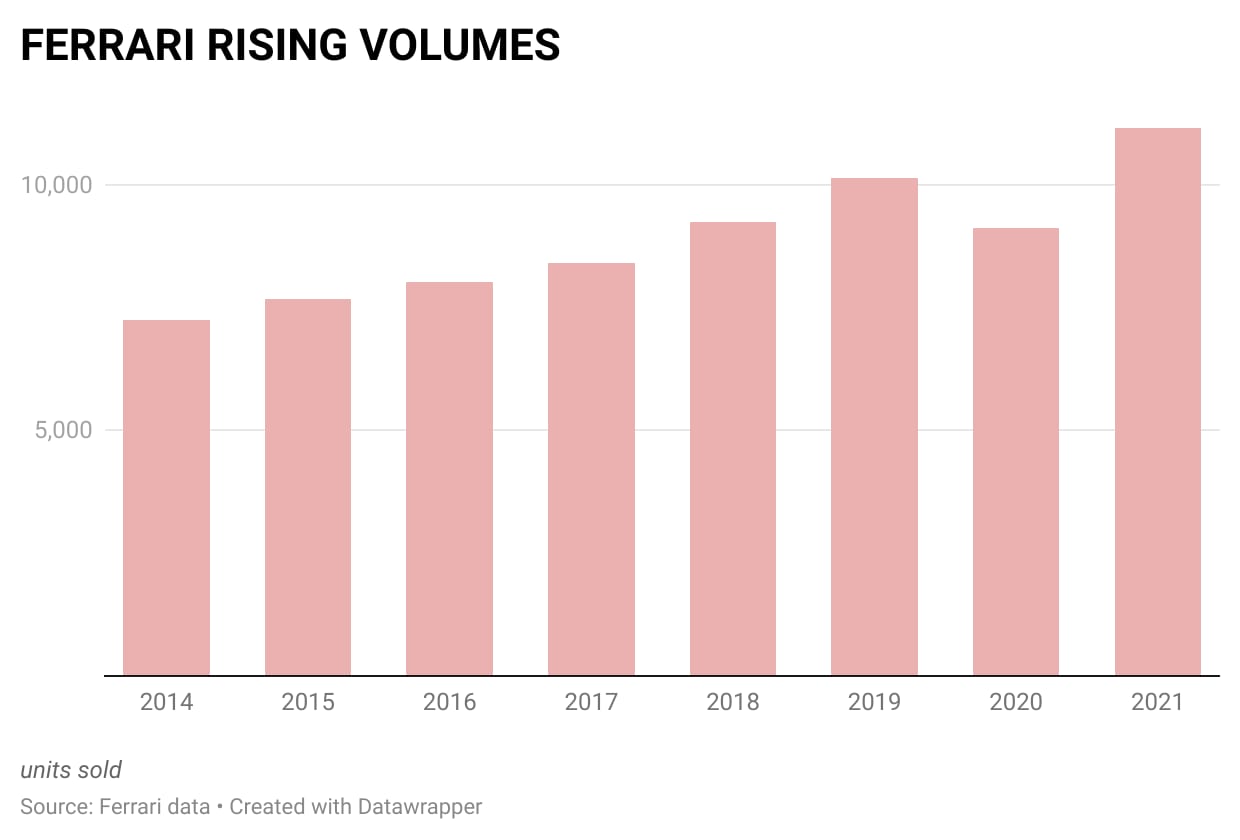 A zero-emission future poses the same challenges for Ferrari as it does for rivals — EV batteries weigh hundreds of pounds, which affects aerodynamics and handling, and can't match the sustained power and throaty roar of a massive combustion engine.

To solve those expensive challenges, Ferrari is researching solid state batteries, which could theoretically improve battery power, as well as hydrogen fuel cells and synthetic fuels, both of which face an uncertain future.

European Union countries agreed this week to an effective ban on new fossil-fuel car sales, but will assess in 2026 whether hybrid vehicles and synthetic, or CO2-neutral, fuels could comply with that goal.

If it becomes law, the EU proposal would also provide small carmakers like Ferrari some wiggle room to negotiate their own intermediate targets until 2036. At that point, they would face the EU requirement to sell only zero-emission cars, which would kick in for bigger carmakers in 2035.

"In every case where you have a technology transition, by definition you have a situation which is a little bit fuzzy, there is some fog," Ferrari CEO Benedetto Vigna, a technology industry veteran who took over in September, told Reuters.

Jefferies analyst Philippe Houchois describes Ferrari's approach as "measured," but adds that may not be popular with investors as some automakers charge towards an electric future.

"They can run their profit center with combustion engines longer and amortize their investment there," he said. "But it's not necessarily what the market wants to hear because the mindset is let's rush into EVs and never look back."

Every 22 minutes on the V8 assembly line at Maranello a finished engine and chassis come together, which Ferrari calls a "marriage."

For an undisclosed sum, the engine with a V12 model includes a plate bearing the name of the worker who made it.

Ferrari executives highlight the emotion some drivers feel when they buy one of their cars, that start at over 200,000 euros ($212,000).

"I see customers coming to take their cars and some of them are crying," Vigna told Reuters.

So it's crucial for Ferrari to create a similarly passionate response to its EVs.

Hybrid sports cars have been a success, pairing powerful engines with the instant acceleration of an electric motor.

But fully-electric sports cars currently have a weight problem because of the huge batteries needed to provide enough power.

Ferrari is not alone in facing these challenges, and few ultra-luxury rivals are rushing to go electric.

Lamborghini, for instance, doesn't plan a fully-electric car until the end of the decade.

But, according to AlixPartners' Duse, Ferrari must weigh its options more carefully than Lamborghini, which has a deep-pocketed owner in world No.2 carmaker Volkswagen (VW).

"For Ferrari, which unlike Lamborghini does not have access to a development platform like that of VW, the issue of investments is also certainly relevant," Duse said. 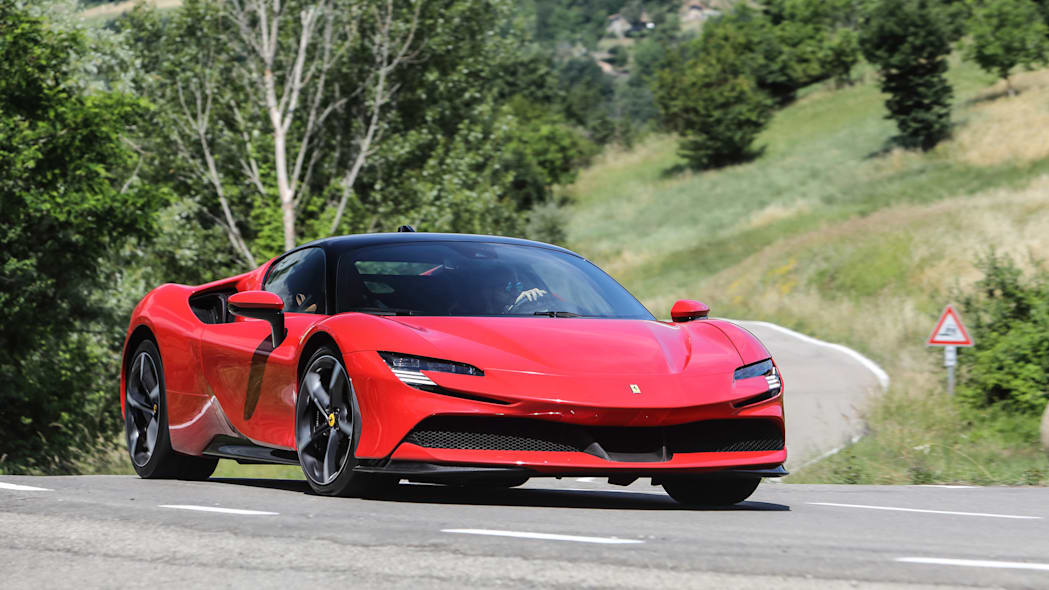 HYDROGEN TO THE RESCUE?

Among its options, Ferrari is researching hydrogen fuel cells, a future zero-emission solution touted by Japan's carmakers and the likes of BMW in Europe that can match the sustained power of combustion engines.

British startup Viritech is already building a hydrogen hypercar, with input from Italian auto design house Pininfarina, a limited-edition vehicle weighing 1,000 kg that it aims to use to sell the technology to carmakers.

CEO Timothy Lyons says over the last 18 months Viritech has seen a "huge spike in interest" from conventional carmakers in the concept.

But hydrogen fuel cell cars need infrastructure for producing "green" hydrogen using renewable energy and fueling stations, which are unlikely to be in place until the 2030s.

Vigna said Ferrari is also working with four partners in Europe and Asia on battery components to research the next generation of high energy density solid state batteries, which are lighter than today's cells.

Carmakers such as Ford and BMW have invested in solid state batteries, but the technology is still some years away from use in cars.

"Solid state batteries are turning into a bit like the hydrogen story in that it's a fuel of the future," Houchois said.

He warned Ferrari's slow pace of change could be seen as dragging its feet, or even "socially wrong."

"But from a business standpoint, they've got a great business and it doesn't have to go away that quickly," he added.

"They're avoiding excessive commitments that they can get to a certain point by a certain date at a certain price because they don't know."