The production Bronco takes shape—and if the real thing looks half as cool as this prototype, we'll be satisfied.

Ford has given us a tantalizing look at what the eagerly awaited 2020 Bronco SUV will look like by unveiling this Bronco R off-road race prototype in the runup to the annual SEMA aftermarket show in Las Vegas. Seeing it also gave us a hint about the Bronco's possible production powertrain, as we spotted a V-6 under the hood. 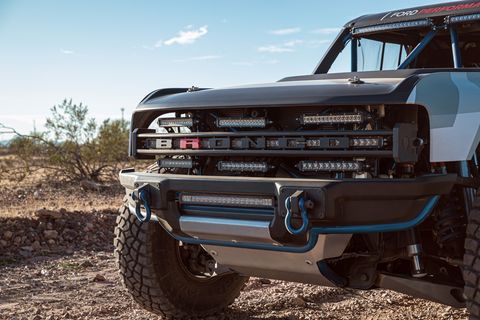 It's only fitting that Ford would unveil the Bronco R on such a historically significant day. On this date in 1969, Rod Hall and Larry Minor won the Baja 1000 behind the wheel of their Bronco race truck. For 2019, Ford built the Bronco R prototype in a time span of six months and in complete secrecy. The Bronco R will be used as a platform to test the production model's powertrain and body-on-frame chassis, although the Bronco R rides on a modified version of the future production variant's T6 architecture.

If you were worried that the new Bronco may lose some of its rugged looks as it's resurrected this upcoming spring, fear not. The squared-off proportions of the Bronco R bode well for what is to come in production. Not only does the Bronco look capable, it looks unlike most anything else you can find out on the road. And although it will compete with the Jeep Wrangler for shoppers, one could make the argument that the Bronco fills an entirely different niche; the Bronco is meant to be more of a trophy truck than a rock crawler (though both will mostly be used to frequent shopping malls and suburban environs anyhow).

We Saw a V-6 under the Hood

This Bronco R isn't just another concept vehicle. Not only is it fully functional, but Ford plans to enter it in the 2019 Baja 1000, where Rod Hall's granddaughter, Shelby, will pick up where he left off as one of Ford's drivers. As for what is powering the Bronco R, Ford remains tight-lipped, but a quick glance into the engine compartment reveals a V-6 of some sort. Smaller dimensions and smaller turbochargers would lead us to believe that the 2.7-liter EcoBoost V-6 is what lies beneath—quite the departure from the 347-cubic-inch small-block V-8 found in Hall's 1969 winner.

The R, obviously, boasts a few differences from the forthcoming production models: a modified front suspension, a modified production-based five-link rear suspension with 14 and 18 inches of travel respectively, custom Fox shocks, 37-inch BFGoodrich tires, and a stripped-out race interior. If the R is any indication of how exciting the production version will be, then we can't wait to see what's in store.

60% of Sturgis residents were against a motorcycle rally that brings in thousands but the city approved it. Here's why