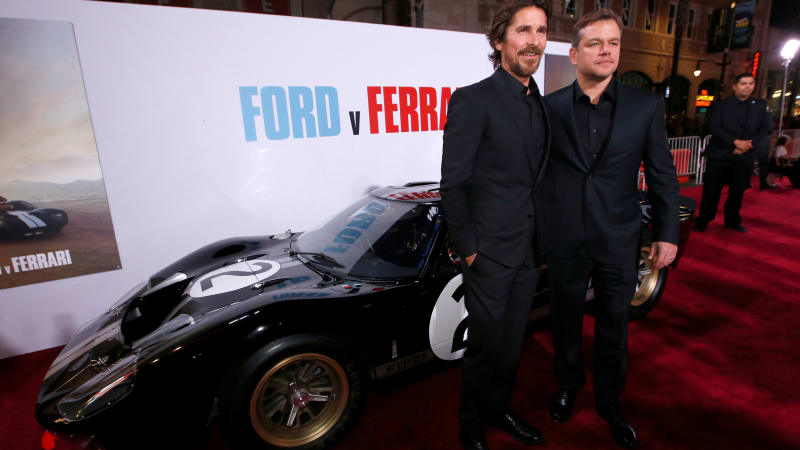 LOS ANGELES — You don't need to be a motor racing fan to watch "Ford v Ferrari," because the battle to win is played out as much between the men making the cars as those behind the wheel.

Starring Matt Damon and Christian Bale, the movie opening on Friday in U.S. theaters is based on the little-known true story of the American and British car designers and engineers who built the Ford GT40 to take on Italy's fabled Ferrari team at the 1966 24 Hours of Le Mans race.

"It doesn't matter if you don't know anything about racing," said Bale.

"That is what we really had to struggle with. ... You can get a film where you can get absolutely devoted to beautiful shots of bumpers and engines and all that. But this essentially comes down to a story about this incredible friendship but told at, you know, 230 miles an hour."

Different versions of the script have been around for about 10 years, but Damon said the one that made it to screen "kind of boiled it down to Miles and to Shelby."

"I'm not into motor racing at all," Damon admitted. "I was so moved by the script that I wanted to spend six months making it, so hopefully the audience will feel the same."

Nevertheless, the race scenes have won plaudits. Autoweek called the film "your new best racing movie ever," while Car and Driver said the racing was "suspenseful" and the cars "look fantastic."

Rather than using computer-generated imagery, director James Mangold used real cars and a team of experienced racing drivers for stunts that put the audience inside the cramped, noisy cockpits. Bale also completed a high-performance driving course.

"The cars and the car action on the road is 100 percent cars. We shot cars with men in them," said Mangold.

"What we tried to do in constructing the races is take you into the cars and into the pits ... meaning getting you involved in the drama of what is going on inside those little cabs hurtling at 200 miles an hour," he said.