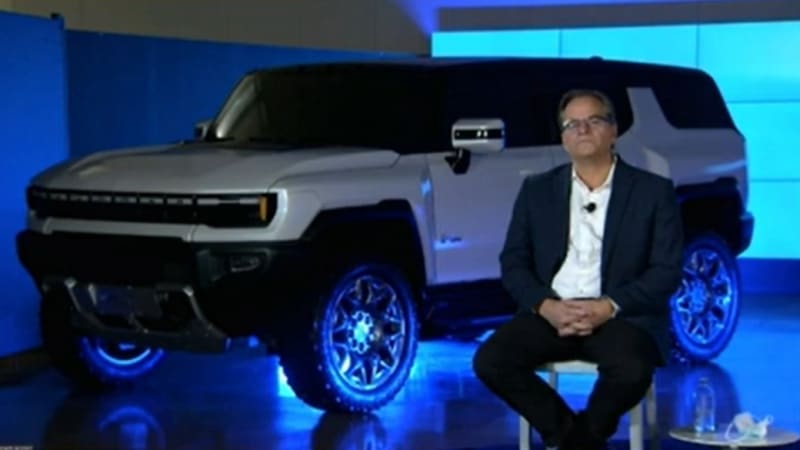 It's nearly identical to its pickup sibling

We knew the GMC Hummer pickup would spawn an SUV, but we didn't expect to see it so soon. It quietly appeared in a marketing presentation about electric cars that General Motors streamed online in November 2020.

The camera never focused on the SUV, there was always an executive sitting in front of it, but we see enough to tell it's closely related to its pickup sibling. Both battery-powered off-roaders are nearly identical from the tip of the front bumper to the edge of the rear doors. The SUV's overhang is a little bit shorter than the pickup's, though there's presumably space for a third row of seats. Its rear end doesn't appear in the presentation.

Nothing suggests GMC made major powertrain changes to the SUV, so it's likely identical to the truck underneath the sheetmetal. Range-topping models will receive three motors zapped into motion by a 24-module Ultium battery pack. Motorists will have 1,000 horsepower and approximately 350 miles of driving range to play with.

GMC plans to start building the Hummer pickup in late 2021, and the SUV might not enter production until early 2022. We expect pricing will initially start above $100,000, but more affordable variants will gradually join the lineup during the first half of the 2020s. When it lands, the off-roader will compete directly against the Rivian R1S.

General Motors will invest $27 billion into electric and autonomous cars by 2023. Its portfolio of EVs will also include a Silverado-sized pickup, a crossover based on the Bolt, and a high-end Cadillac crossover named Lyriq. "We want to be number one in EVs in North America," affirmed company boss Mary Barra.