It's a Kustom Christmas at Mooneyes X-Mas Party Show & Drag 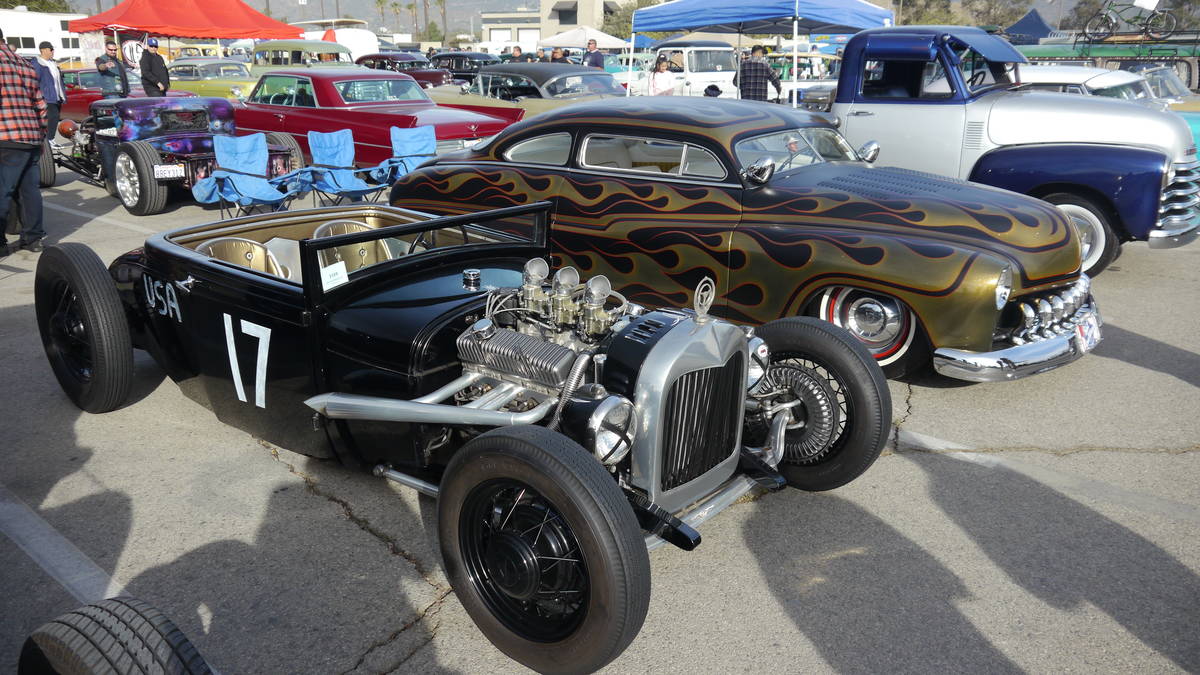 It’s beginning to look a lot like Mooneyes, everywhere you goooooo… especially if you went to Irwindale Speedway last Saturday for the Mooneyes X-Mas Party Show & Drag 2017.

Over 1000 kustoms, lead sleds, bombs and rat rods carpeted the parking lot at Irwindale, and exactly 100 wheel-standing muscle car drag cars registered and checked in for the drag races held all day on Irwindale’s NHRA-sanctioned 1/8-mile drag strip. There were bands, vendors, a pinup contest and loads of X-Mas spirit. 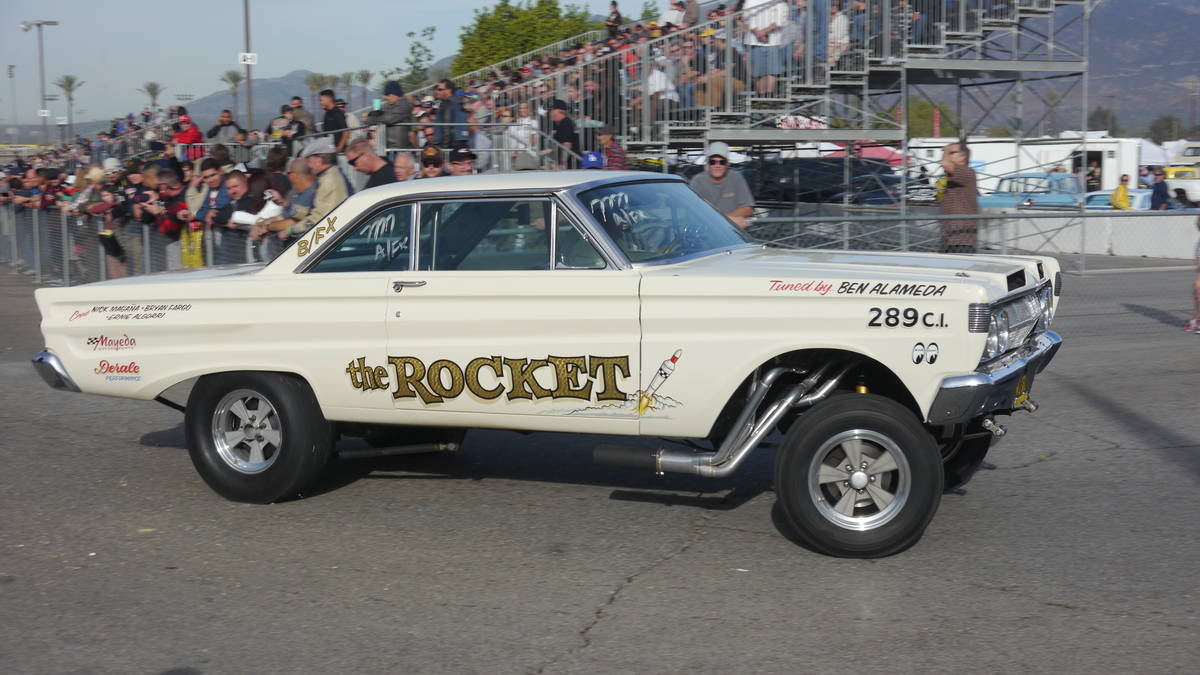 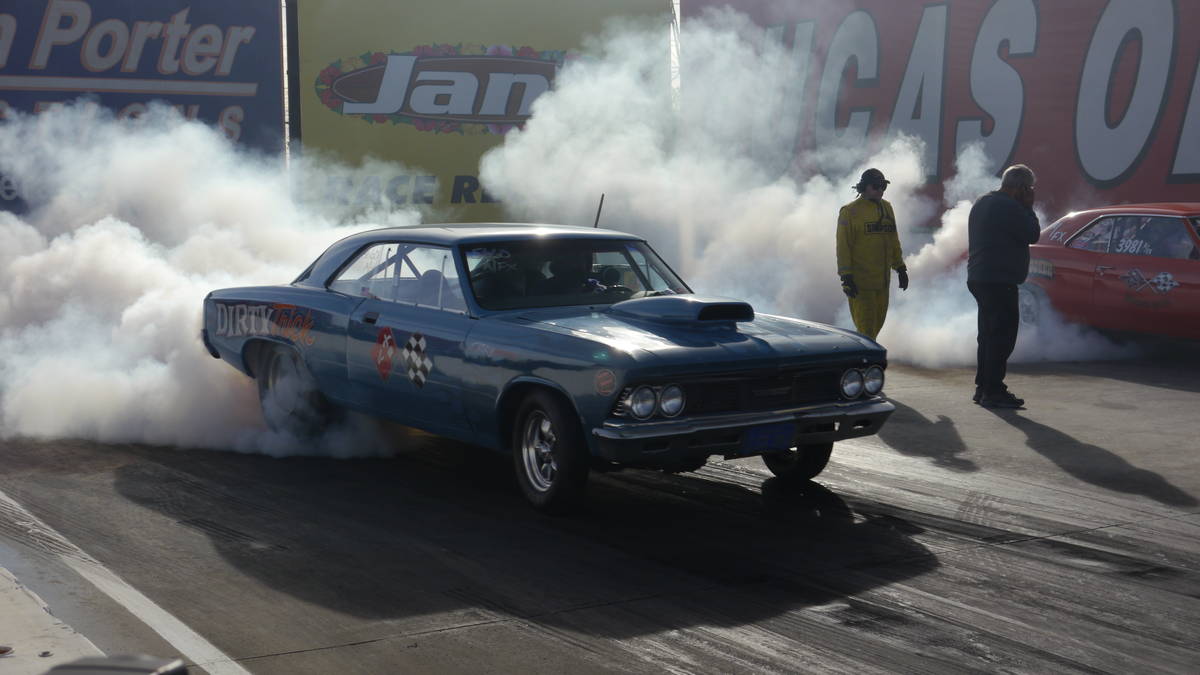 But wait, you ask, what is a Mooneye?

Mooneyes (plural because there are two of them) is an ancient hot rod and speed parts company in Santa Fe Springs, Calif. founded by original hot rod hero Dean Moon over 60 years ago. Dean grew up in Southern California, working at his parents’ restaurant in Santa Fe Springs. He served in Japan after WWII then in Korea during the Korean War. So he was a real American hero on the tail end of the Greatest Generation. When he got back from all that, he founded Moon Equipment Co. to feed the burgeoning hot rod craze that was sweeping the nation. It seemed everyone had foot-shaped Moon gas pedals, shiny Moon gas tanks and those spun Moon wheel covers to get that extra couple mph on the salt. 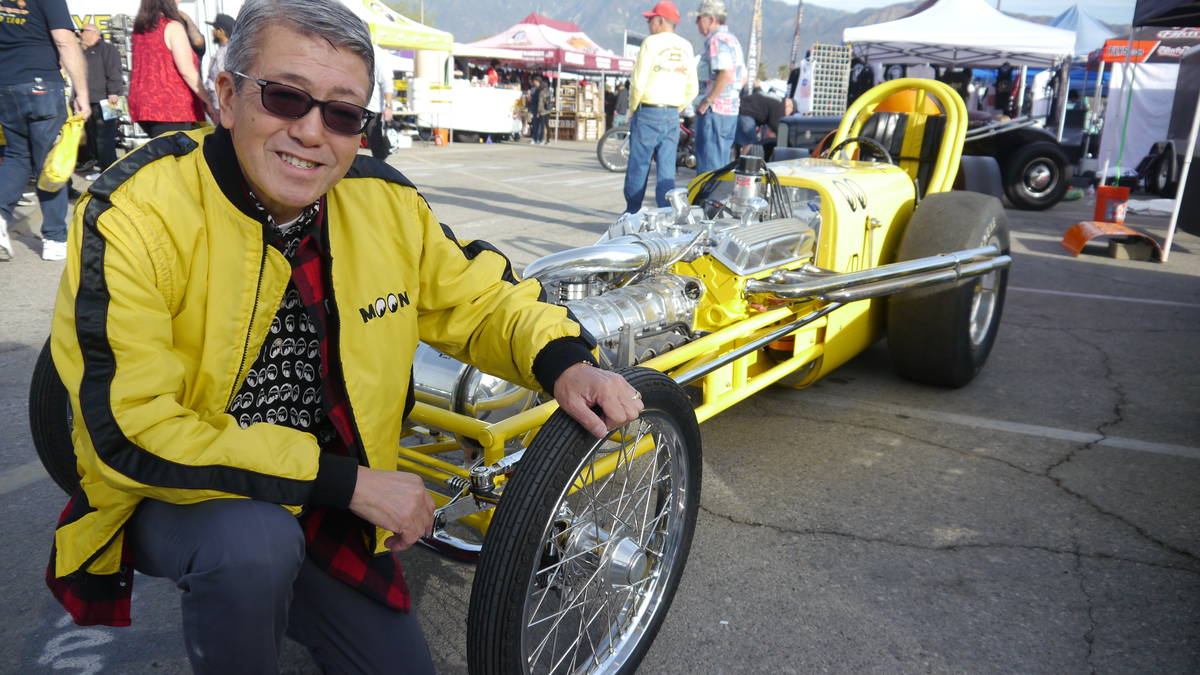 A couple beats and maybe two decades behind Dean Moon’s life story, was Shige Suganuma, who grew up in Yokohama, Japan but decided early on that he loved fast American cars.

“It was lowered, with Cragars,” Suganuma said.

He came to the U.S. around that time and got to see drag races at OCIR (Orange County International Raceway) and Pomona (Lions and the original Irwindale drag strips were closed by then). He liked what he saw. 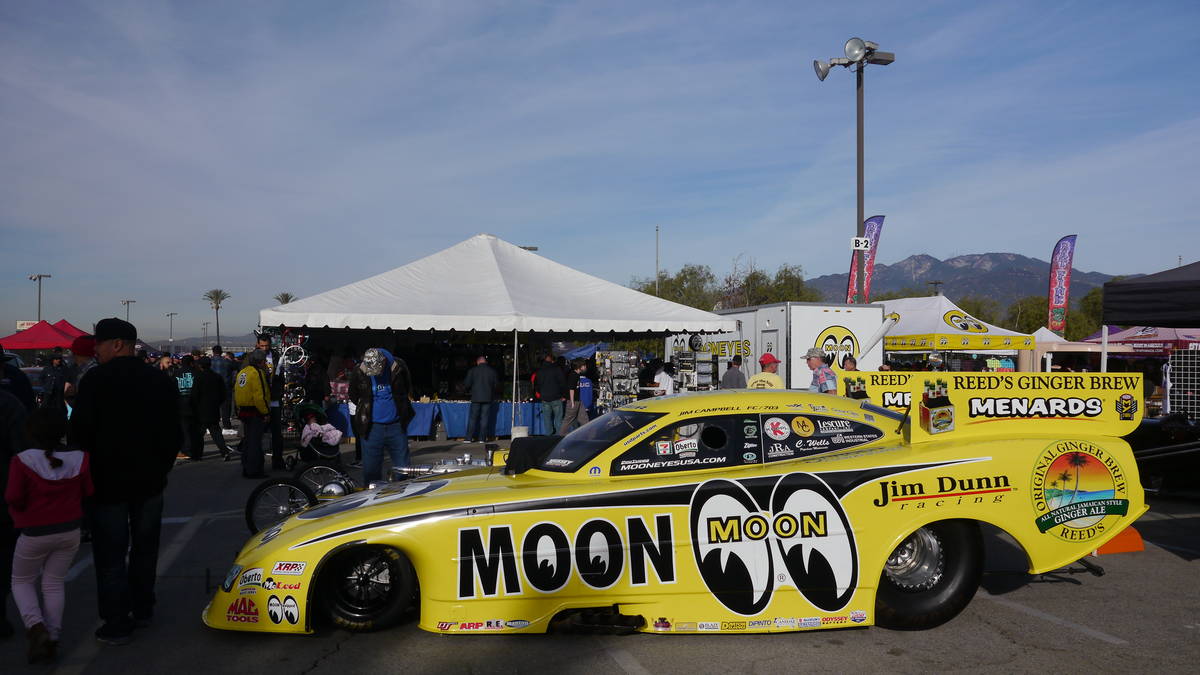 He started selling Moon Equipment in Japan in 1986. Then, sadly, Dean Moon passed away in 1987 and Suganuma bought Moon Equipment in 1992, carrying on the company’s SoCal hot rod traditions, one of which is the annual “X-Mas Party Show & Drag,” held the last ten years or so at Irwindale. 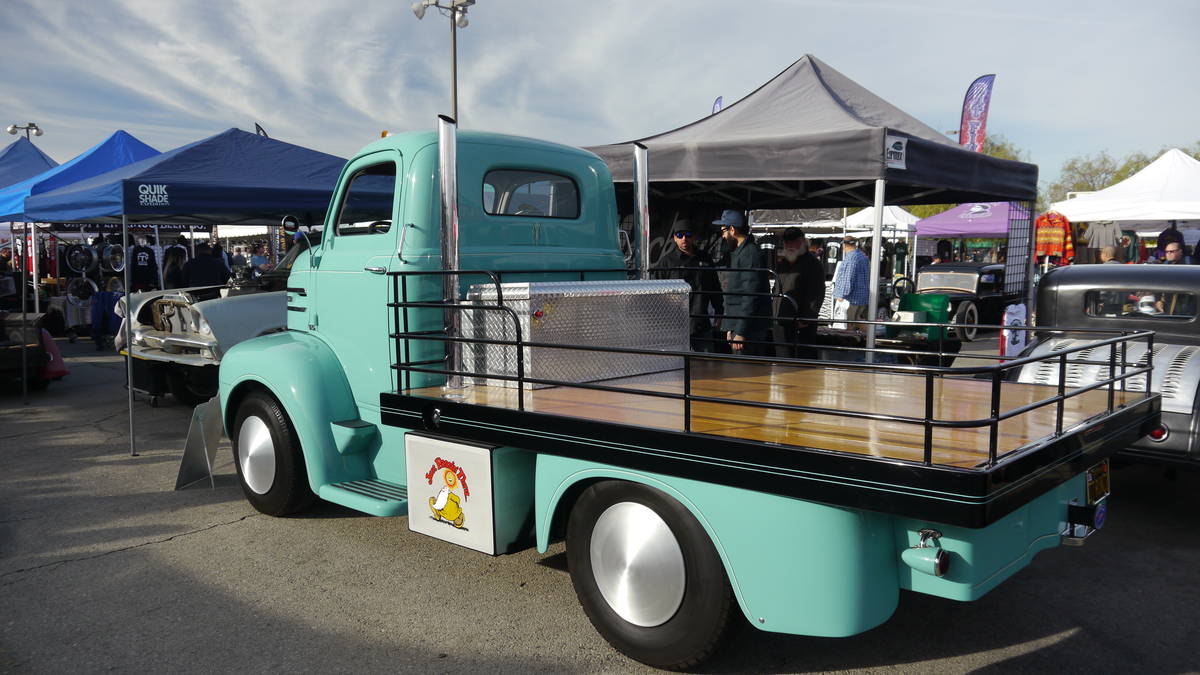 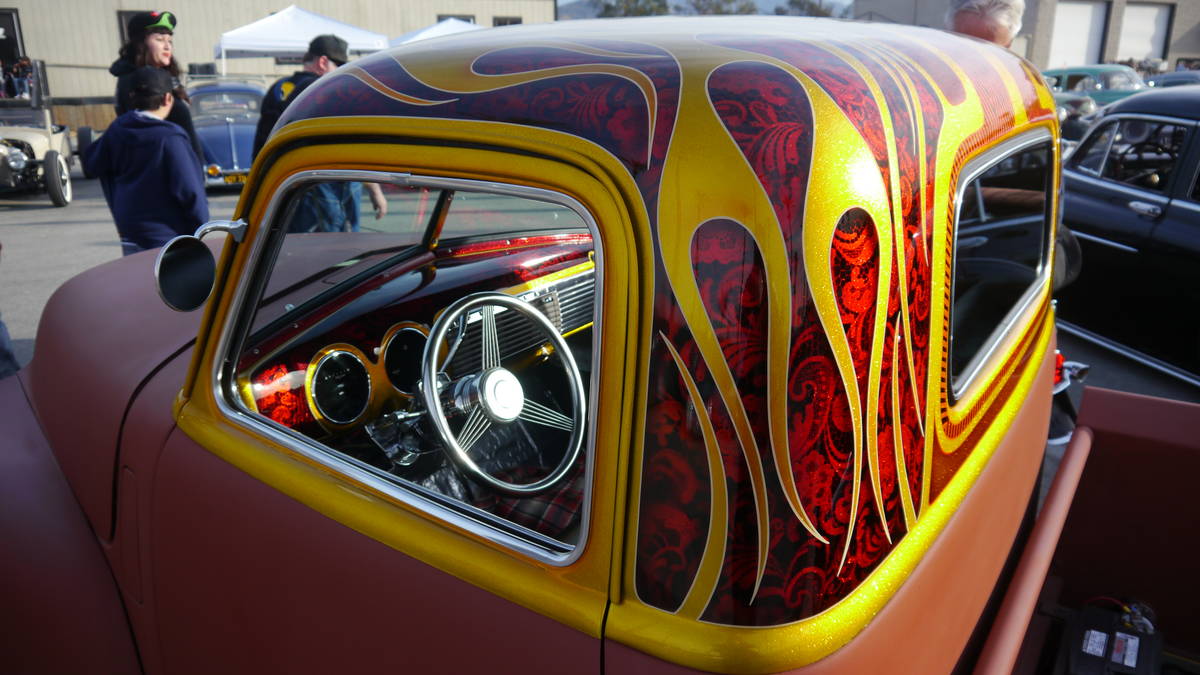 The most interesting thing about the X-Mas Party is the crowd. Most hot rod gatherings are, let’s face it, old white guys, God bless ‘em. But the Mooneyes X-Mas is young guys, and from all backgrounds. It’s a cross-cultural representation of the entire San Gabriel Valley, with as many club names in Spanish as in English. There are young guys with chinos and Pendletons; old guys in chinos and Pendletons; girls in rockabilly styles; guys with neck tattoos; guys with no tattoos at all; a guy selling Tiki carvings, a girl selling dresses out of a converted Mother’s Cookies step van; older guys doing the drag racing; younger guys hanging around talking smack with each other while cooking breakfast on vintage hibachis… Every year it’s a wonderful coming together of people who love cool cars, the ultimate democratization of car culture. Run what ya’ brung. And have fun. 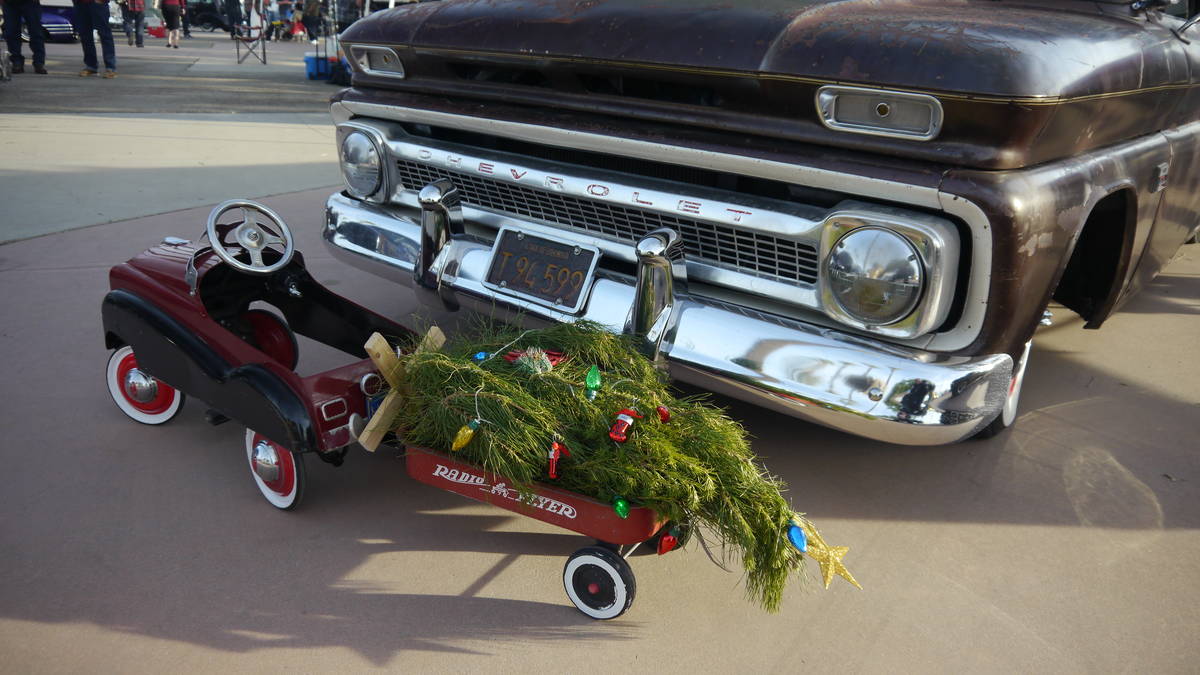