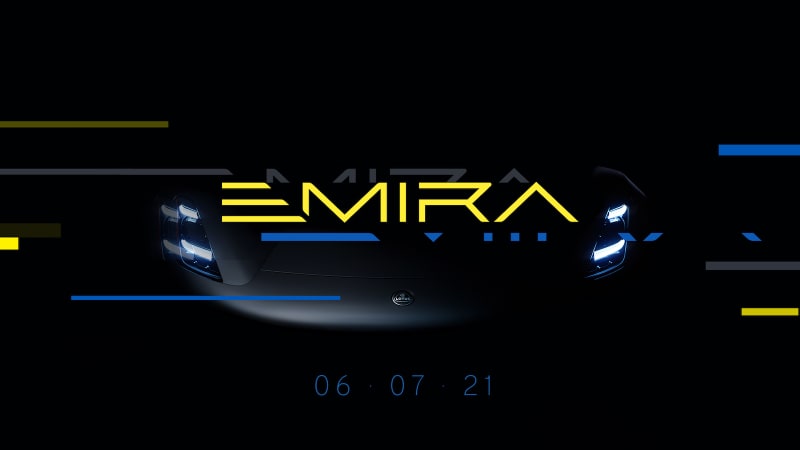 Lotus is four years into the 10-year Vision80 plan that it announced at its 70th anniversary in 2018, and according to Matt Windle, managing director of Lotus Cars, the brand is "on track" to completely revitalize its line of sports cars as it branches out into profitable new automotive segments. Windle also confirmed the name of Lotus' upcoming new vehicle: "The spirit and passion that gave the world the Elise, Exige and Evora will live on in the next generation of cars – cars like the all-new Lotus Emira."

The British company's sports car replacement, previously known as the Type 131, will make its virtual debut on July 6 before being shown in public at the Goodwood Festival of Speed that begins on July 8. Lotus confirmed that the Emira will be offered solely with internal combustion engine options and will not offer hybrid power, and that the powerplant comes from "an exciting new powertrain partnership" with options that are "new to Lotus." The company's Elise, Exige and Evora used four- and six-cylinder engines sourced from Toyota and tuned specifically for high-performance use.

The Emira, which will be priced similarly to the Evora, will be the last production Lotus powered by gasoline, and it will be built atop a brand-new "Elemental" platform that relies on the brand's familiar extruded aluminum-intensive chassis. Three more platforms are currently in development, and these four architectures will provide the basis for the company's planned expansion. The next we expect to see in production is the Hypercar architecture that forms the basis of the upcoming Lotus Evija. The electric Evija and its "Extreme" platform will start rolling out of the Hethel headquarters later this year.

Lotus' "Evolution" platform is next, and it will underpin "an all-new range of lifestyle vehicles" that "will catapult Lotus into a new era of higher retail volumes and significant revenues." We take that to mean SUVs. This Premium architecture was reportedly designed by Lotus in the UK with collaboration from other brands under the Geely umbrella in China and Sweden and Germany.

Finally, Lotus and Alpine have consummated their recently announced partnership and will launch an "E-Sports" platform that will be "will be flexible and modular." We expect a range of electric vehicles on this architecture that could include everything from sports cars and hatchbacks to crossovers and other utility shapes. Lotus plans a new electric E-Sports sports car that will match the weight of its latest gasoline-fueled models.

In followup interviews after the digital conference, Windle confirmed that these plans will require an investment of over 2 billion pounds (around $2.8 billion at current rates). The company's owners in China (Geely) and Malaysia (Etika Automotive) will provide the financial muscle so the niche carmaker can ramp up production from an average of 1,500 cars per year to tens of thousands worldwide, to be sold online or at dealerships that will adopt "a 360-degree Lotus digital brand experience."

Those investment plans include a new Lotus plant in the Chinese city of Wuhan. Windle, the Lotus executive, told Reuters that thanks to Geely's backing the carmaker has been able to invest in a new automated paint shop for its UK facility and has leveraged the Chinese company's relationships with suppliers to get better prices.

"This really is a new era for us," Windle said. "Not only will it be accessible in terms of price point, but our quality is going to take a huge leap forward as well."

Windle told Reuters that Lotus aims to be all electric by 2028 — when the carmaker turns 80 — though the exact date may depend on the Emira's popularity. "But definitely before the end of the decade, we'll be fully electric," Windle said.