This insane truck was once killed in development.

On sale this summer, the third generation 2021 Ford F-150 Raptor is a high-speed, off-road, performance pickup truck with what has become a cult following, owners who want to go 100 mph in the desert and fly through the air over ruts and rocks. Revealed on Wednesday, the new Raptor adds new features including a built-in generator to power anything from campsites to power tools.

The beefy 37-inch tires and wheels and cutting-edge suspension deliver stability despite the extreme terrain even while you're holding onto the "oh, sh*t" handle.

Normally, you'd have to tear apart a vehicle to get it to fit such enormous tires. These are stock, not special order. And they're 2 inches bigger than earlier models.

Getting this level of equipment, once custom, is now turnkey. It lifts the truck to a new level. And the sound of the exhaust is a "deeper more menacing sound."

If testosterone had a soundtrack, this would be it.

This is a high-performance war that started a decade ago.

"We couldn't be more excited. Ford invented the off-road high performance pickup segment with the first generation Raptor in 2009. It was truly inspired by the trophy trucks that raced the Baja 1000," said Todd Eckert, Ford Truck Group marketing manager.

The Raptor was so different from anything that had been done before that it took awhile for some people at Ford to wake up to the fact the company could create a whole new category of high performance off-road pickups. So initial plans were shelved.

The passion of the Ford team internally played a role in resurrecting the idea. But as soon as the internet spread rumors and spy photos of the truck, the groundswell of enthusiast demand was enough to help get it resurrected.

This latest version will debut with the popular heavy metal song "Enter Sandman" by Metallica.

The 2021 Ford F-150 Raptor is known for its smooth flights through the air and comfortable landings. Ford Motor Co.

"Raptor was born not only to speed over rough terrain but also jump and catch air. It was a one-of-a-kind entry in the performance market," he said. "Over the last four years, the present generation Raptor cumulatively outsold Porsche's entire line of sports cars and also outsold Chevrolet's Corvette." 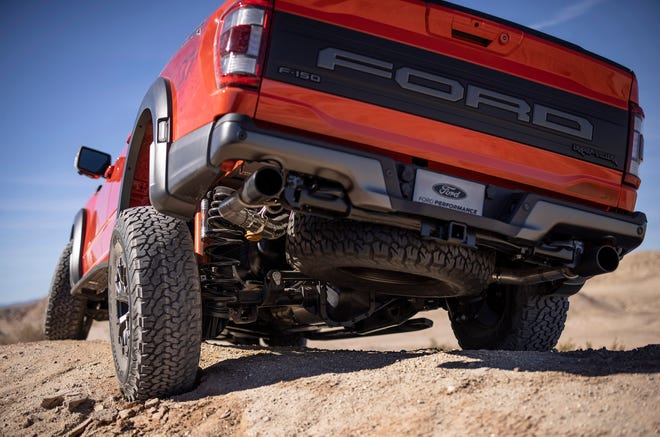 In 2018, Sergio Marchionne, then-CEO of Fiat Chrysler Automobiles, rolled out a five-year plan that included a vow to compete with the Ford Raptor. The battle has been fierce; MotorTrend named the Ram 1500 TRX, a more powerful and expensive desert-racer, the 2021 Truck of the Year in December.

Ford will reveal the new Raptor's power, fuel economy, price and specifications closer to when sales begin. The previous Raptor starts around $53,455 plus destination fees and can hover around $78,000 when personalized. .

The TRX's challenge to Raptor supremacy as the ultimate racing truck won't go unanswered. Ford is expected to add a more powerful and expensive Raptor R model with a V-8 engine in 2022. 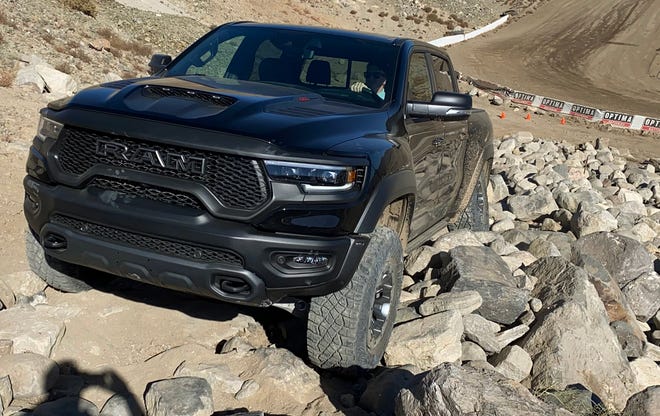 Battles to build sporty pickups have gone on for years.

The Detroit Three built the Ford Lightning, Chevy Silverado SS and Ram SRT-10 — like the Mustang, Camaro and Dodge Challenger of pickup trucks in the early 2000s. Great for street racing.

This is the modern day encore for desert racing.

"Off-road performance is in our blood," Eckert said. 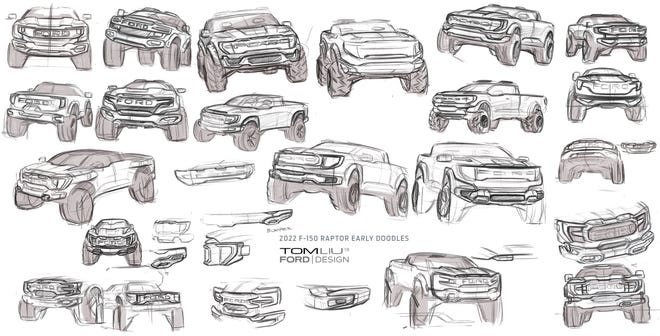 The Raptor is for buyers who want a truck to drive off-road straight from the factory while not compromising on payload, towing, comfort or technology for daily use.

"Think of it as cruise control for low-speed driving," Eckert said. "Drivers just set a speed up to 20 mph and the Raptor manages throttle and braking to allow the driver to focus really only on steering. It makes it easier for drivers to maintain constant speeds over difficult terrain ... or for getting through deep snow or sand. It's activated simply using a button on the center console." 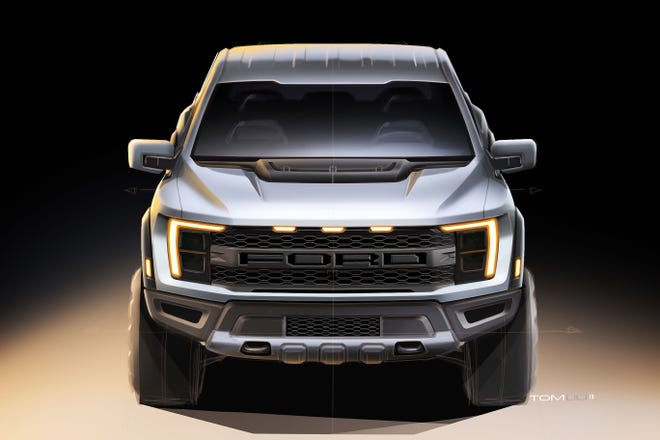 One pedal drive combines acceleration and braking; press to accelerate and release to brake. Just one foot is needed for off-road activity like rock crawling.

Raptor also has an on-board generator that prevents the need for a portable generator to camp or work, a key feature cited when the F-150 won the North American Truck of the Year.

The Ford team spent months in the desert torture testing.

"We start with a high-strength steel F-150 frame, which has been modified and reinforced for Raptor's extreme usage," said Tony Greco, Raptor program manager. "The modifications and reinforcements which we make include taller and stronger shock towers, unique control arm pivot locations, a lower front axle which is needed for increased travel, stronger bracketry for suspension, shocks and spring attachments and a Raptor-specific trailer hitch."

Raptor's front and rear suspensions were redesigned to improve off-road traction and stability and on-road ride and handling quality, he said. 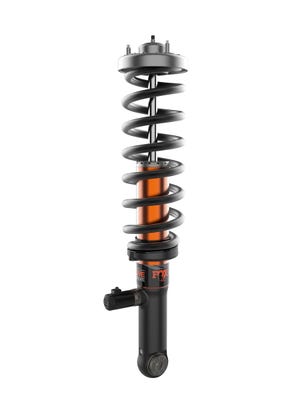 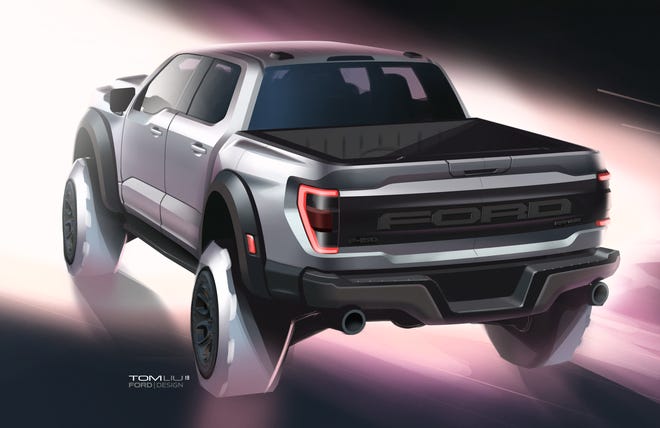 There's more to share about ball joints, knuckles, wheel bearings and coil springs but you get the idea. Anytime designers talk about "geometry changes" in vehicle discussions, well, it's a good thing.

This is about aggressive control and stability off-road and smooth plush ride on road.

If you’re jumping, the further down your wheels are hanging, the more absorption you're going to get when you land, due to the shock absorbers stroking.

"That's where we see the big value in off-road events, when you're often up and down quite a bit. The shock technology and how we've deployed that on this vehicle," architecture engineer Jack Cooper said. "You can go faster in the desert, you can hit bigger things. If you don't have as much travel and can't absorb that energy, you'll hit harder, the suspension will bottom harder, and it'll be less comfortable and not as durable in the end." 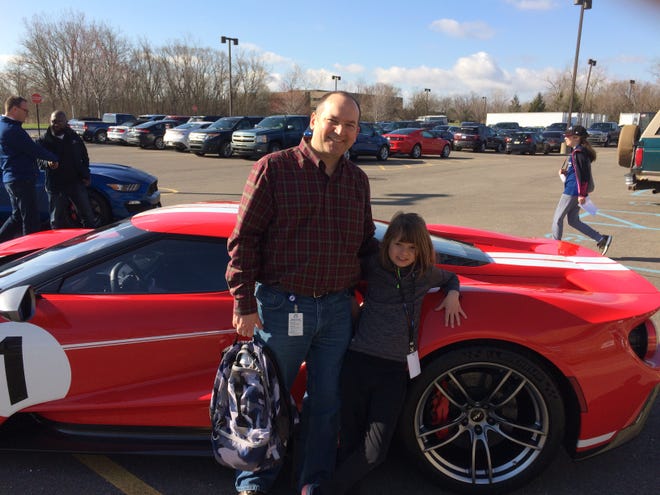 Jack Cooper with his daughter, Allison Cooper, outside his Ford office in Allen Park in 2018. The architecture engineer played a key role in developing the 2021 Ford F-150 Raptor. Jack Cooper

"We learn more and more every time we push the envelope. It's one of the best parts of my job, working with the vehicle dynamics team." said Cooper, whose brother is a software developer at Google. "I have a dream job." 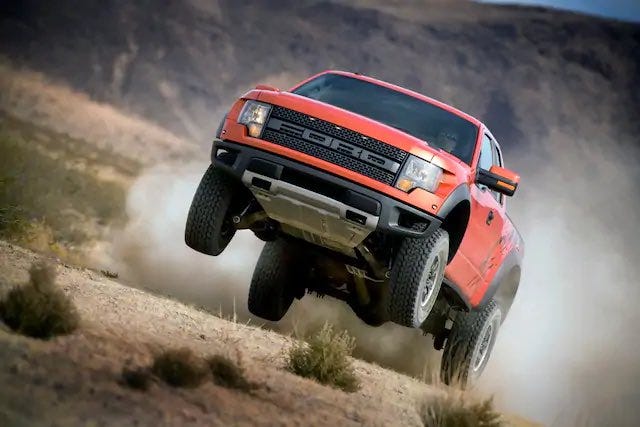 Ford builds the Raptor in Dearborn.