Wheels Up & Wild Rides From the Southeast Gassers Assoc. 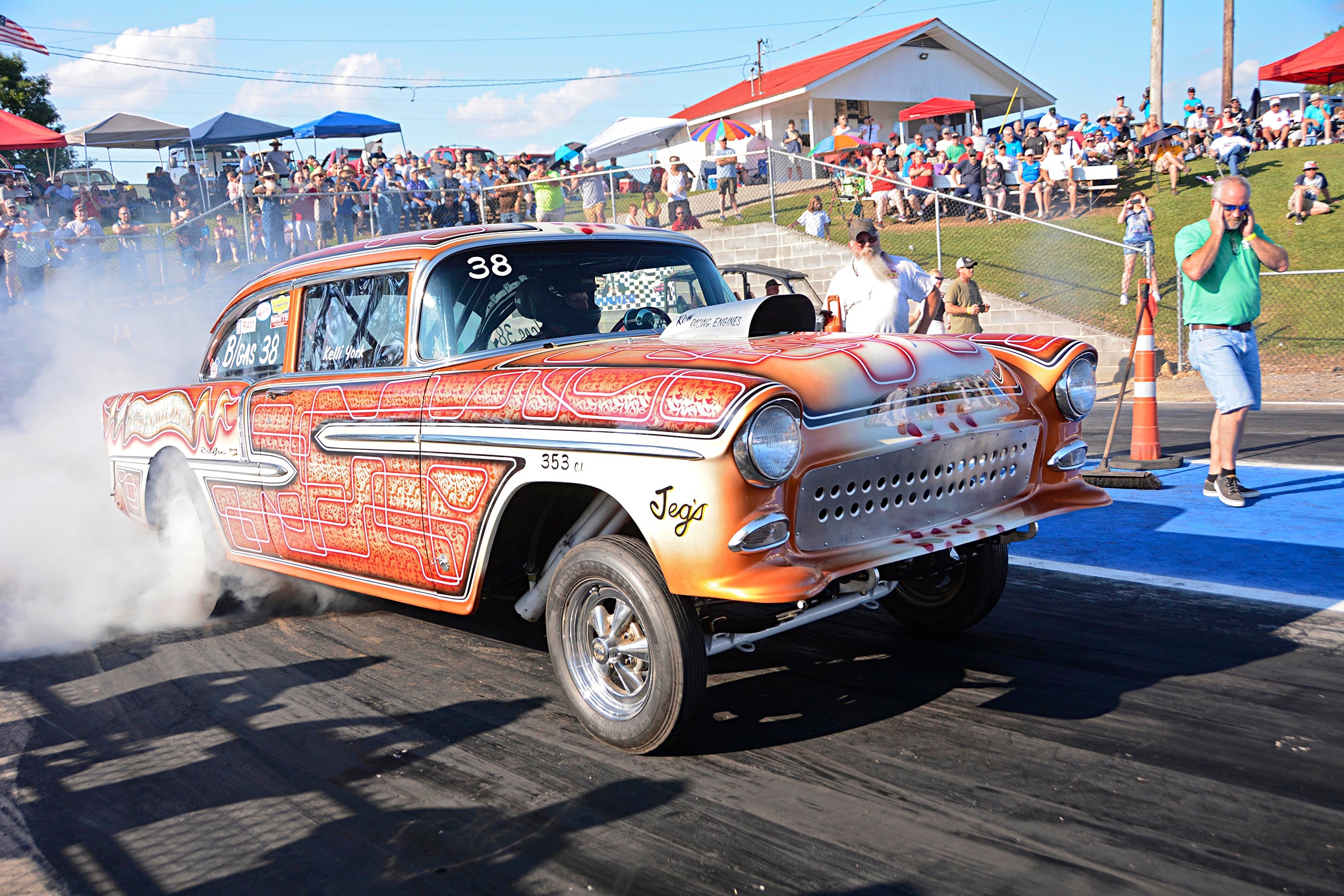 The Southeast Gassers Association (SEGA) started as a small group of guys who were dedicated to building period-correct gassers and racing them heads-up. What was originally a small and somewhat exclusive club grew into an organization, which then grew into a racing series.

Fast-forward to 2019, and the SEGA now puts on an 11-race series with points, prize money, and bragging rights on the line. Ringleader Quain Stott runs a tight ship and stays true to his vision of period-correct gassers. Set in the theme of 1967, SEGA has strict rules to keep the playing field even, while providing an exciting race for the thousands of fans who follow the series. To break it down in the simplest of terms, all cars must have a clutch-assisted manual transmission, a straight axle, period-correct wheels, and vintage-style paint. There are obviously many more rules that dive deep into the car’s setups, but those are the main staples that the car are built around.

The racing is split into three main gasser classes: A/Gas, B/Gas and C/Gas, along with experimental classes such as D/Gas and H/Gas. The A/Gas cars have a minimum weight of 6 pounds per cubic inch, B/Gas is 8, and C/Gas is 10. Each car is weighed after every official qualifying or eliminations pass. The cars vary wildly, from short-wheelbase Anglias to Tri-Five Chevys and even pickup trucks. Engine combinations are all over the map, with every racer trying to take advantage of the available cubic inches with high-revving action. The inside of the engine can have trick components, but the outside must look period-correct to the 1967 rules package. If you’re curious about the details of the rules, you can see the complete (and lengthy) list of rules for each class at southeastgassers.com.

At a typical Southeast Gassers Association race, you’ll see two rounds of qualifying, and then eliminations begin shortly thereafter. When eliminations start, it’s truly a heads-up drag race. The first car to the finish line wins, narrowing down the field until a winner is crowned. The action is hot, with unpredictable wheelstands, wild rides, and crazy burnouts throughout the day’s activities. Make no mistake—this isn’t a show, it’s a race.

We’re excited to provide coverage from the third stop on the 2019 Southeast Gassers Association tour, a step back in time to Baileyton “Good Time” Drag Strip in Baileyton, Alabama. The historic eighth-mile track is the perfect fit for nostalgia drag racing, and the fans did not go home disappointed. Take a look at our highlights from the day’s action from sweltering Memorial Day weekend in Alabama. 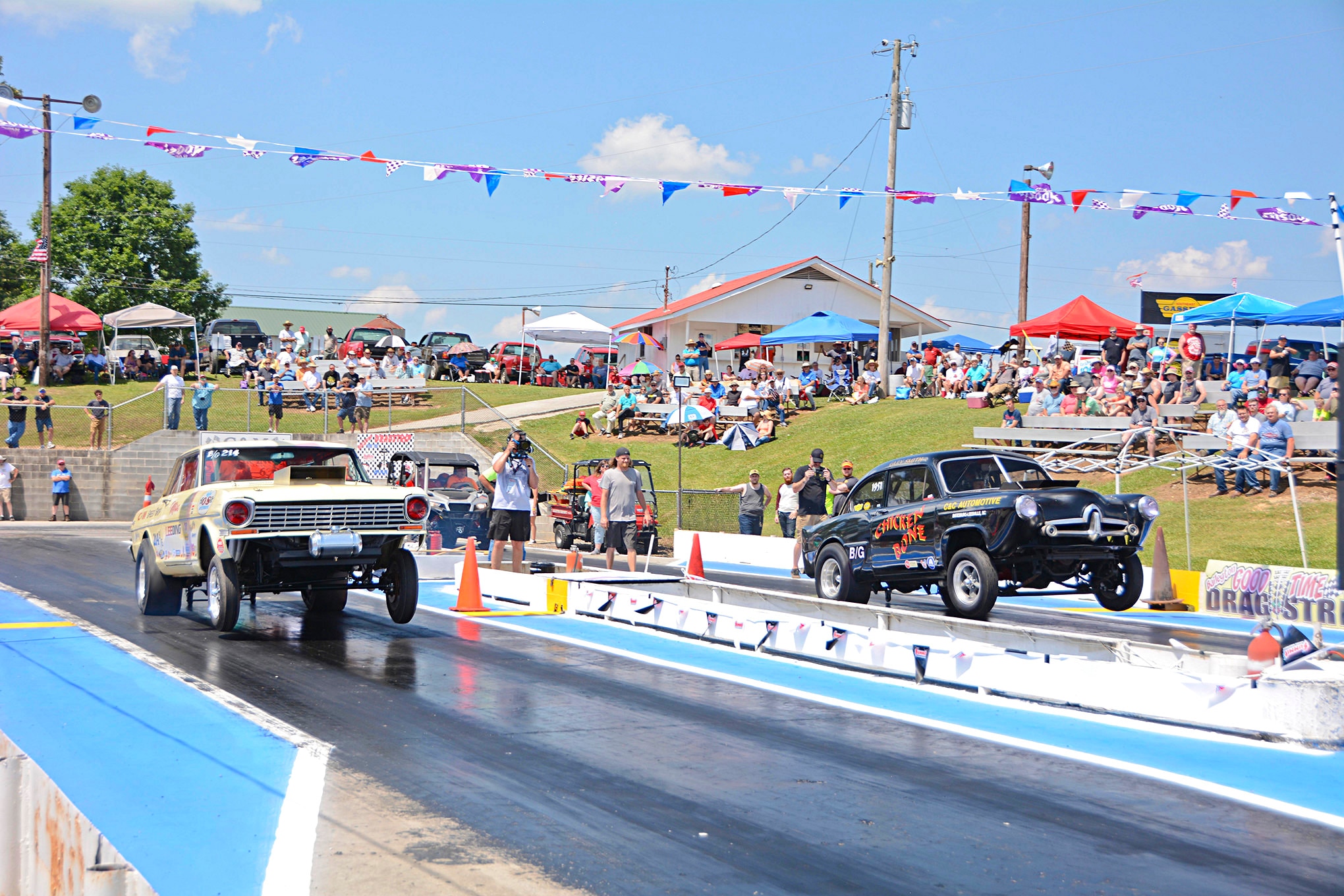 Jeff Madden in his Miss Leeding Chevy II squares off against the Henry J of Gary Smith in B/Gas qualifying. Wheels-up launches are commonplace at a Southeast Gassers Association race, and the front wheels often leave the racing surface on the second and third gearshift. 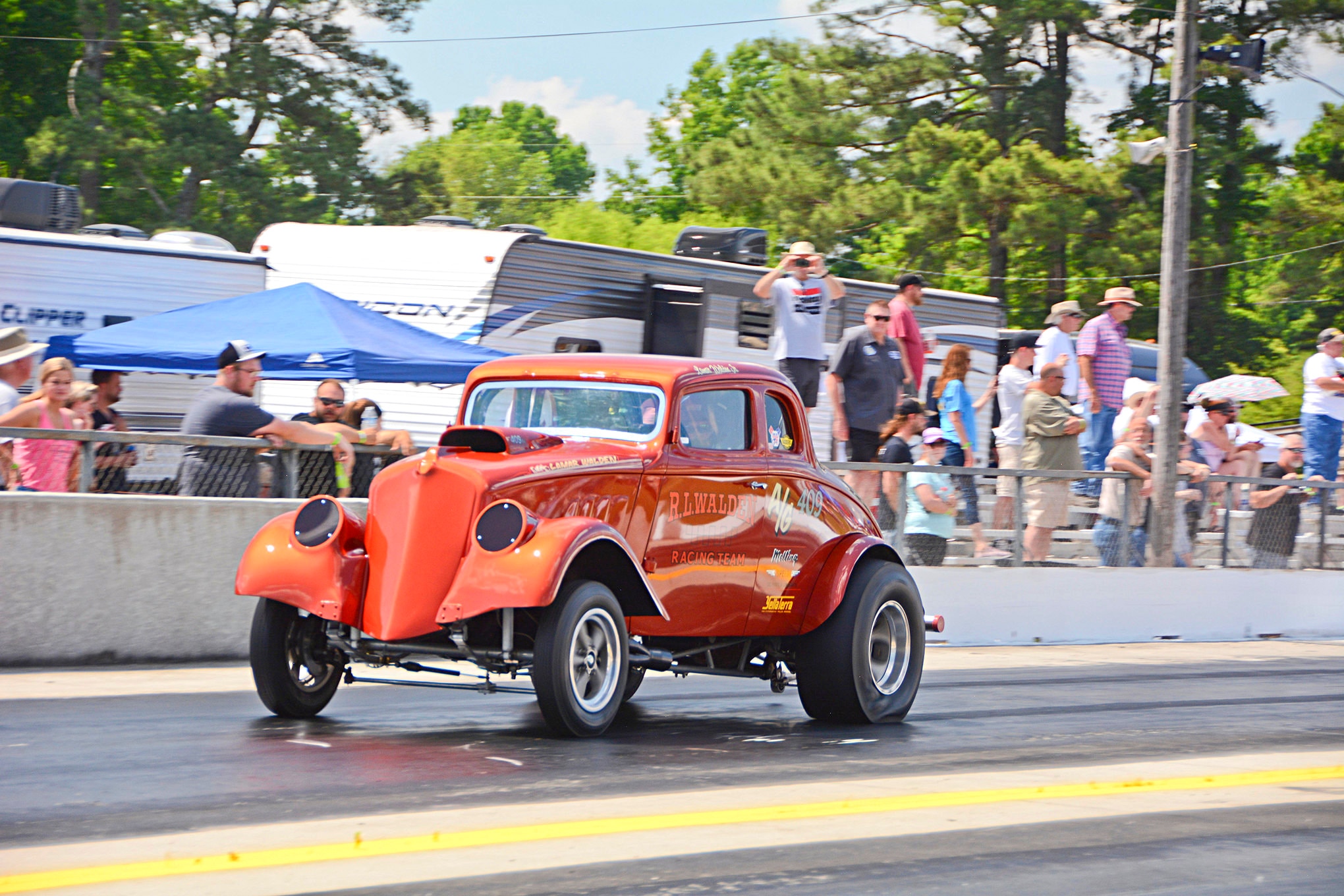 A new contender for 2019 in the A/Gas ranks is no stranger to drag racing. Rob Walden, son of the famed 409 guru Lamar Walden, recently completed a beautiful tribute to his father’s ’33 Willys gasser. The Doraville, Georgia, racer built a stout 409-based engine using tricks that he learned from a lifetime of lessons from Mr. 409 himself. 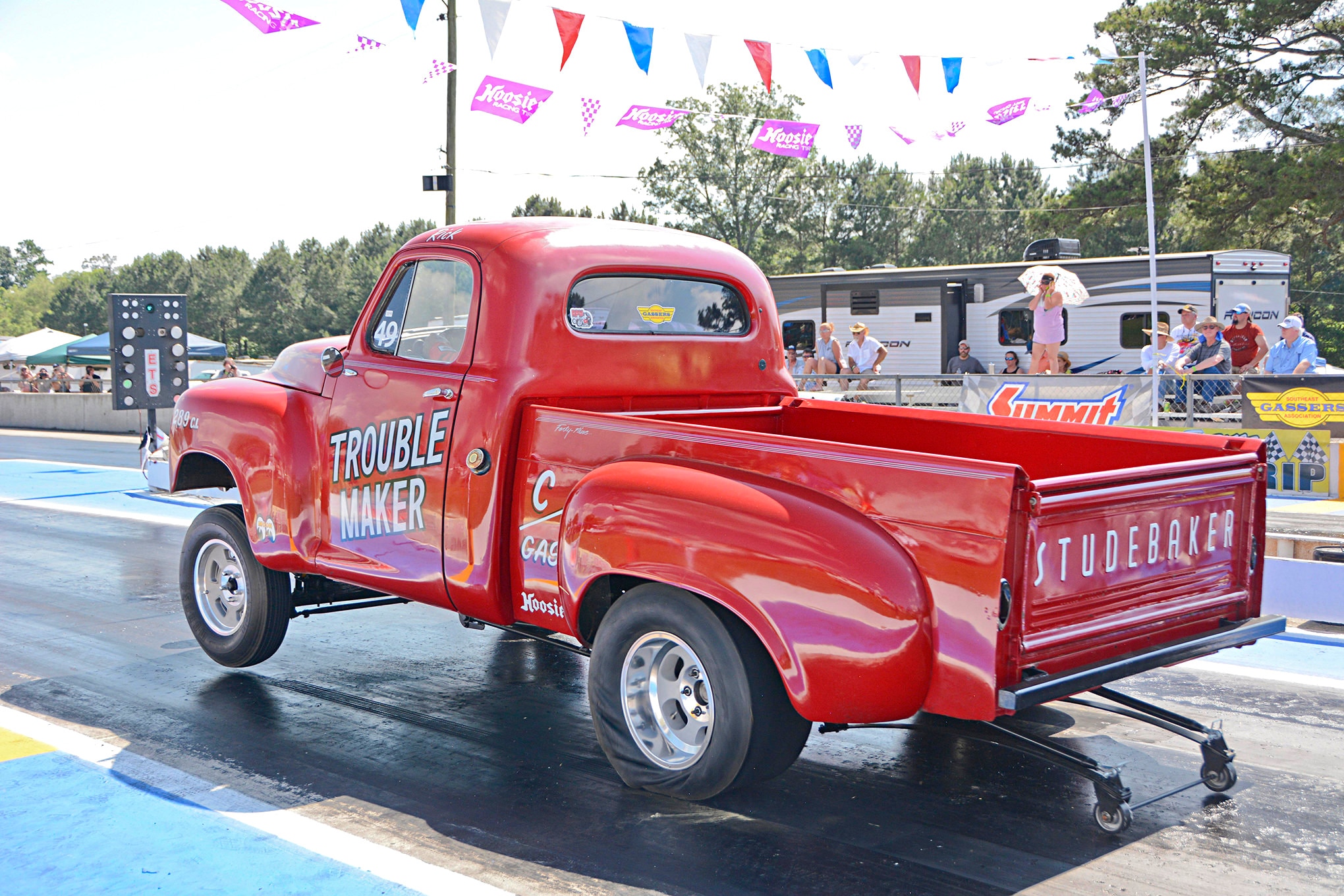 You won’t see many trucks in competition during a Southeast Gassers event, but you’ll certainly remember a Studebaker truck leaving the line with the front wheels in the air. Rick Cathcart is the man behind the wheel of the C/Gas pickup. 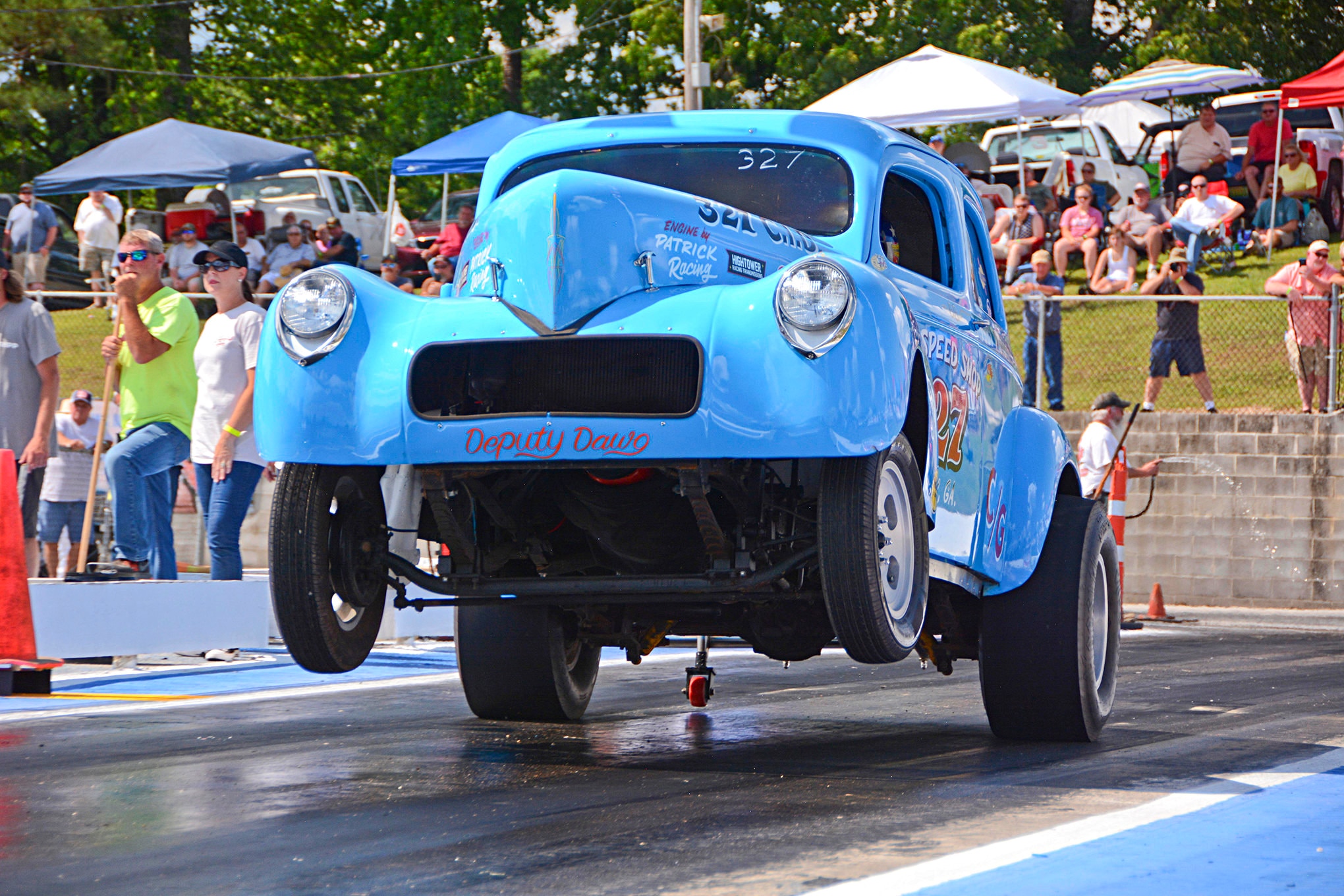 With the C/Gas weight limit of 10 pounds per cubic inch, BB Brown’s ’41 Willys must weigh at least 3,270 pounds given the 327ci small-block Chevy under the hood. The sedan dead hooks off the line and puts on a show for the fans at Baileyton “Good Time” Drag Strip. 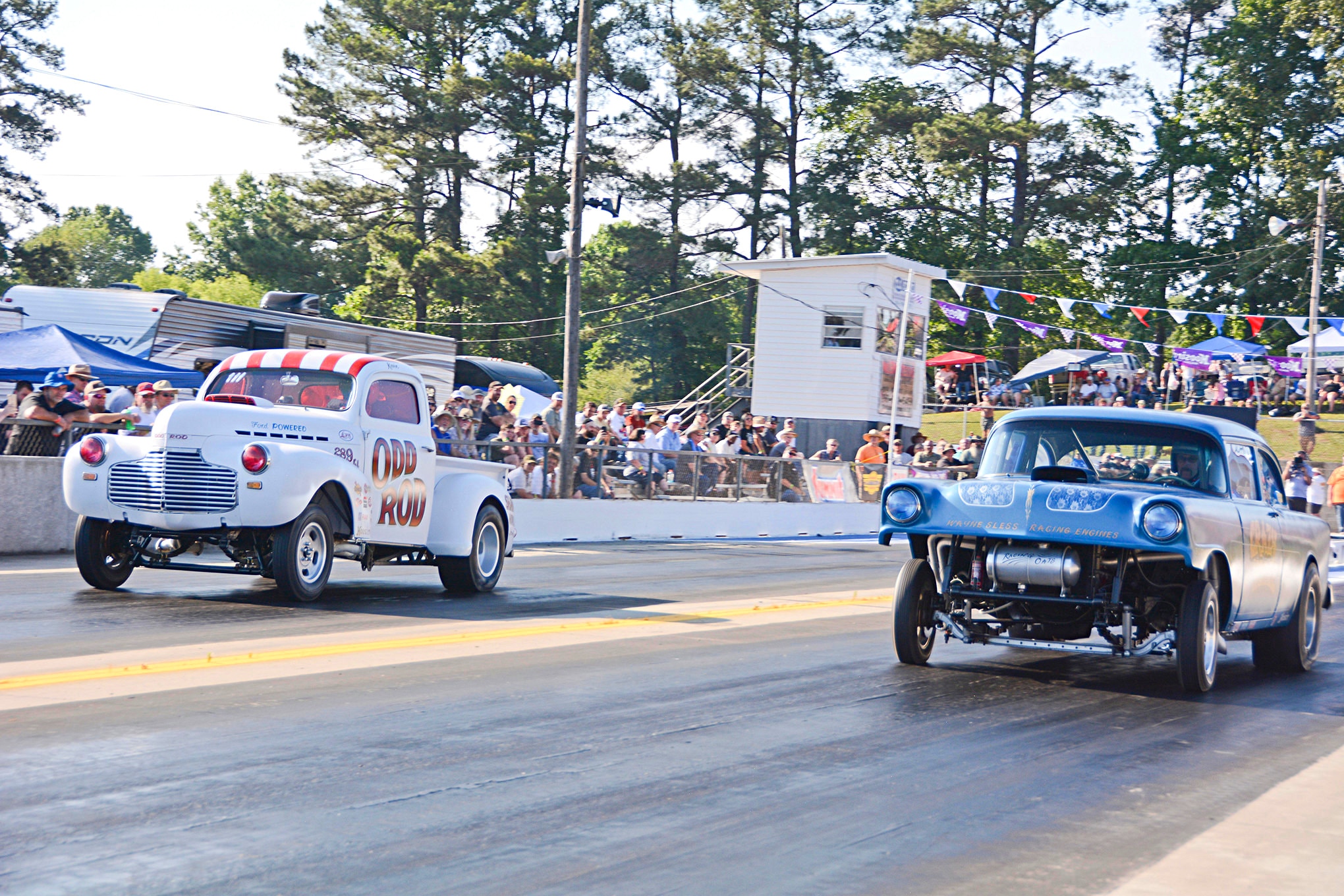 Another truck in the C/Gas class is Kevin Shaw’s Odd Rod, which is a combination of a Ford F-1 with 1941 Chevy front sheetmetal. Despite the crossbred body panels, the truck is powered by a 289ci small-block Ford. Shaw is seen here battling against Larry Noel’s 1956 Chevrolet named Crazy Horse. 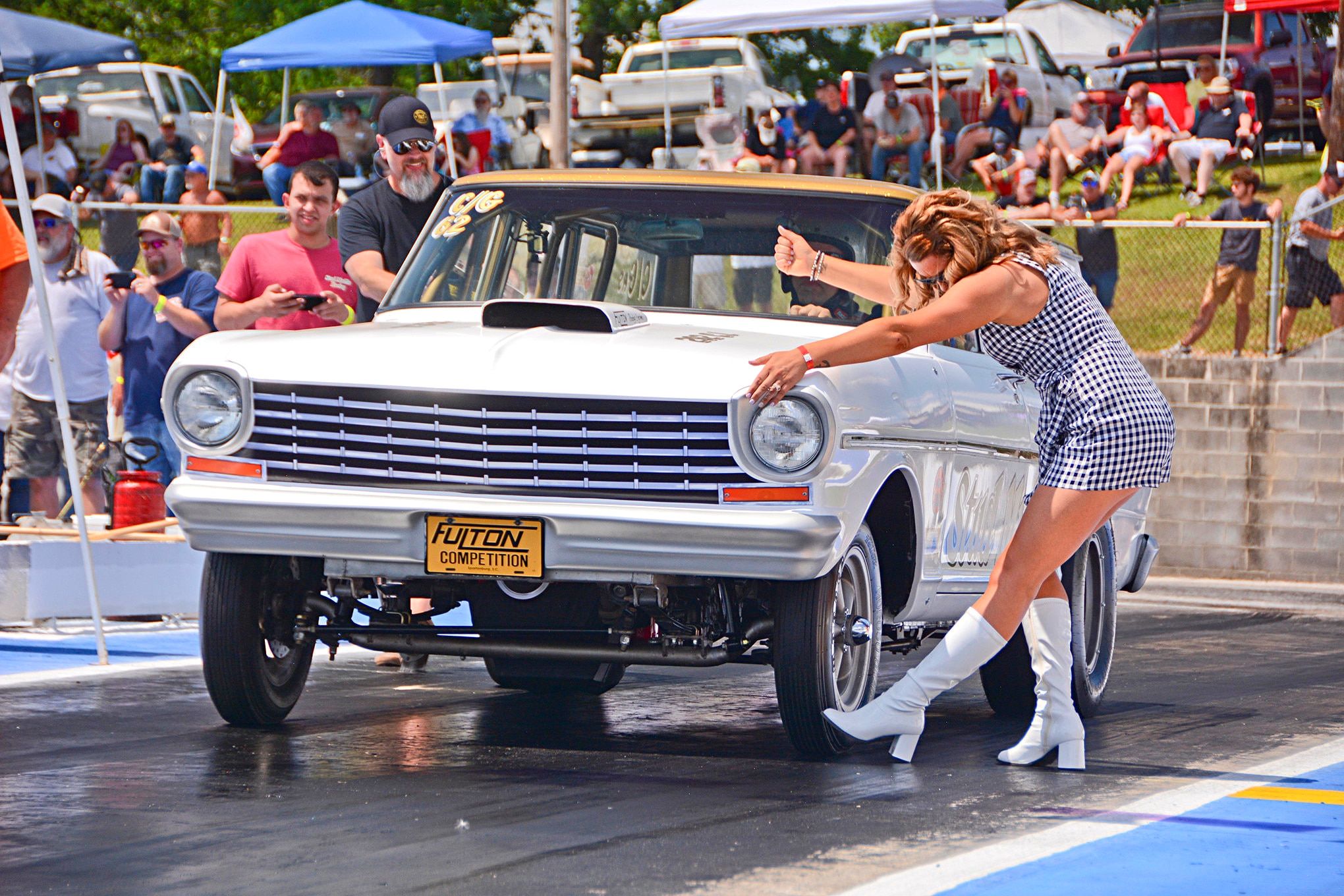 Back-up girls are part of the experience at a Southeast Gassers Association race. They work hard to line up their spouses, friends, and family members in the groove. Mary Beth Haynes is seen lining up the Patriot Falcon, driven by Daniel Haynes, while Elizabeth Noel is getting Leslie Horne pulled into the beams in his Stud Muffin Chevy II wagon. 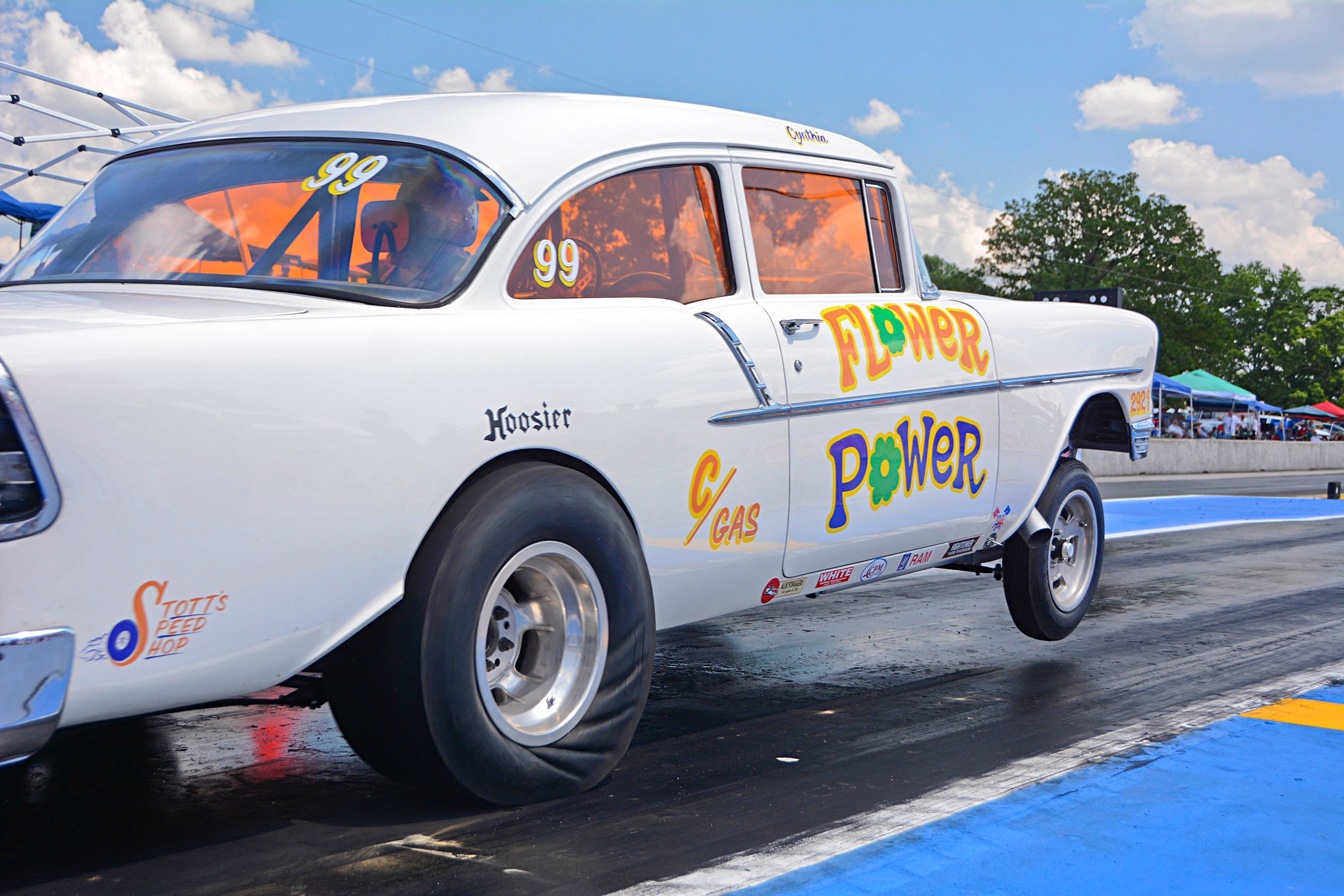 The Flower Power C/Gas-prepared 1956 Chevrolet bites hard on the hot track surface, using every ounce of power from the 292ci small-block Chevy engine. Cynthia Phillips is the fearless pilot, taking an interesting approach with no burnout. She drives around the water box and performs a dry hop prior to staging the car. The strategy seems to work just fine! 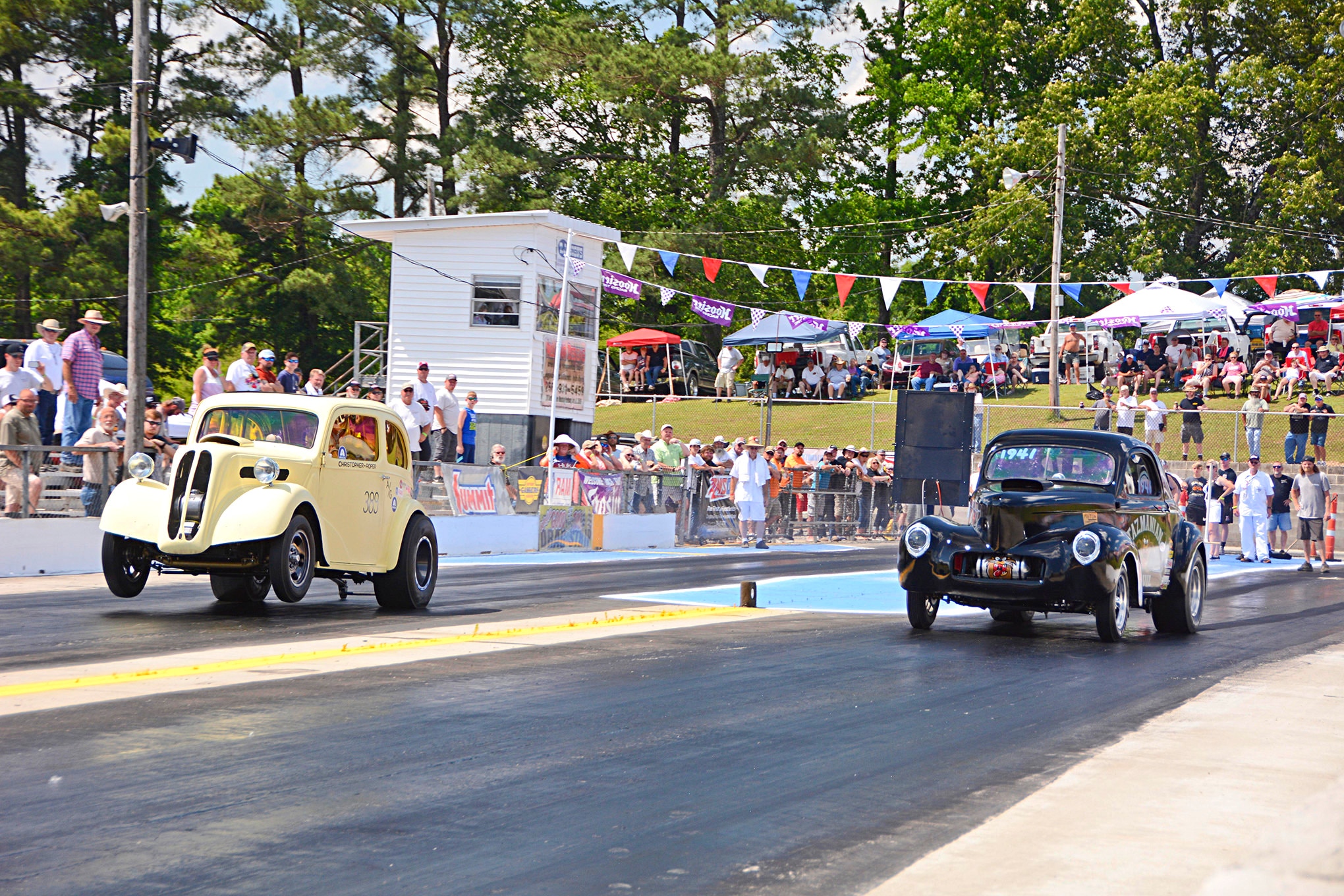 Ben Christopher is carrying a Second-gear wheelie in his angry Anglia, a high-winding A/Gas entry, alongside Gary Cline’s ’41 Willys coupe. Cline had some bad luck at the Baileyton stop on the 2018 SEGA tour, as he lost control of the wild Willys and crashed into the concrete barrier. These guys are serious about winning and often drive their way into some crazy situations. 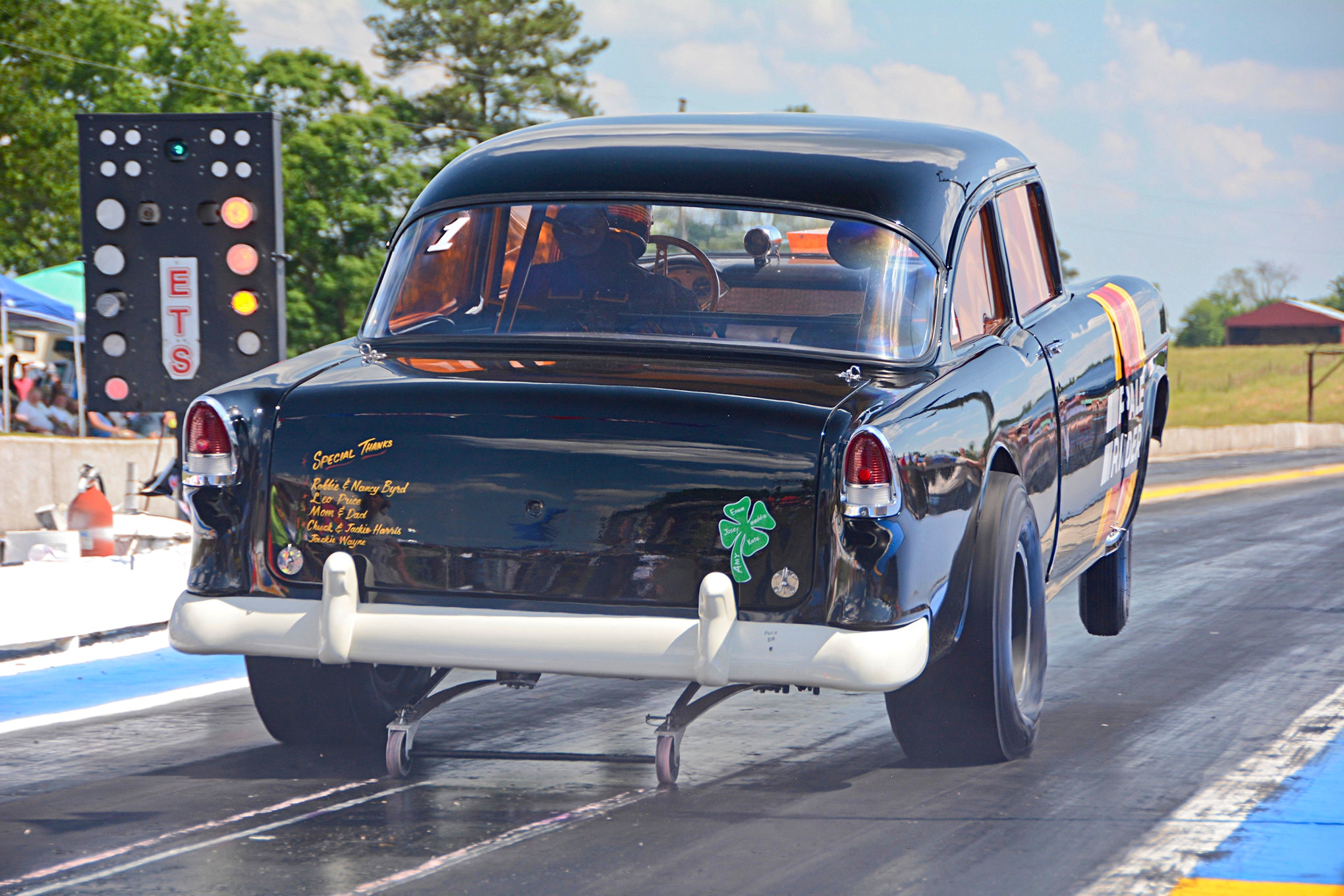 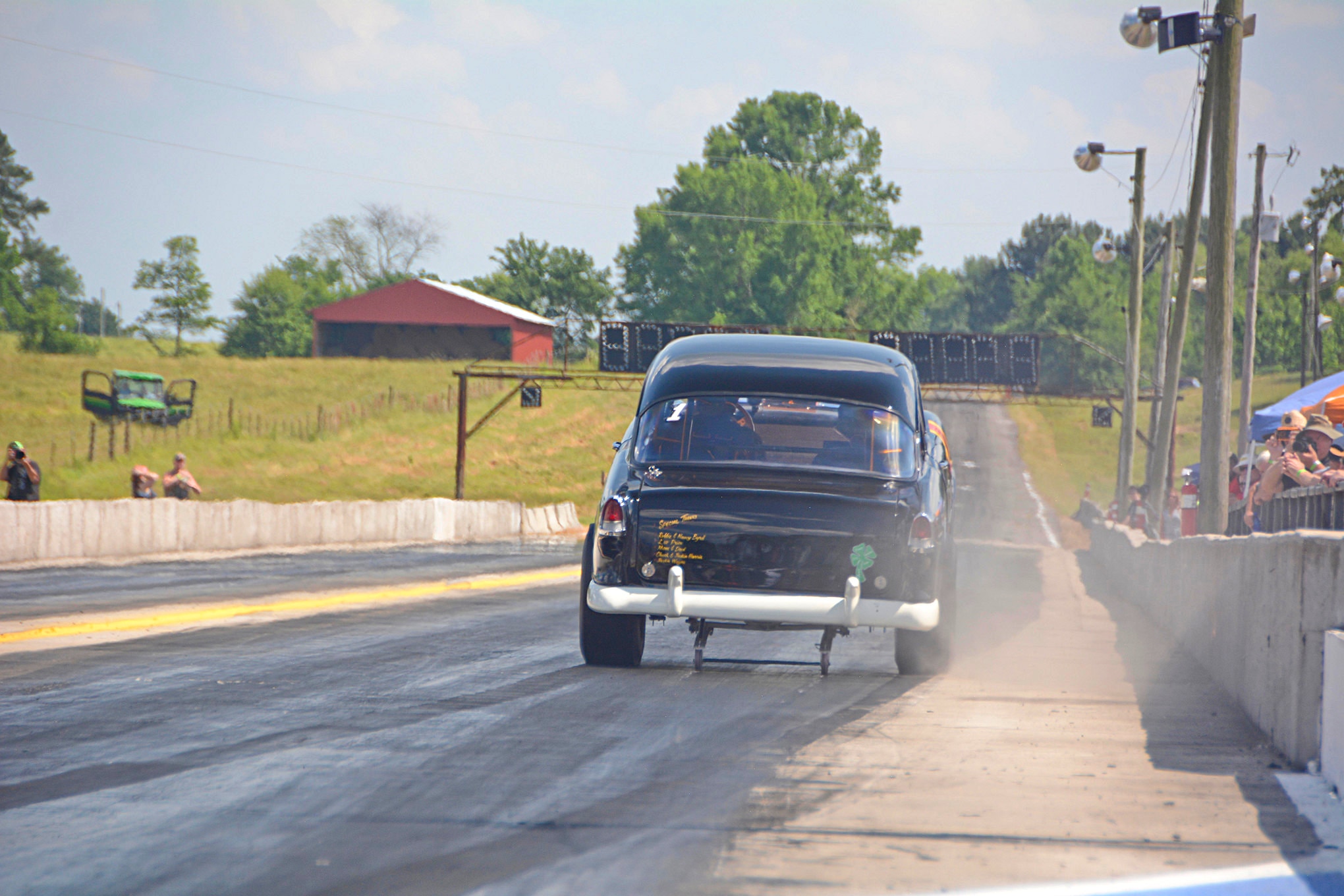 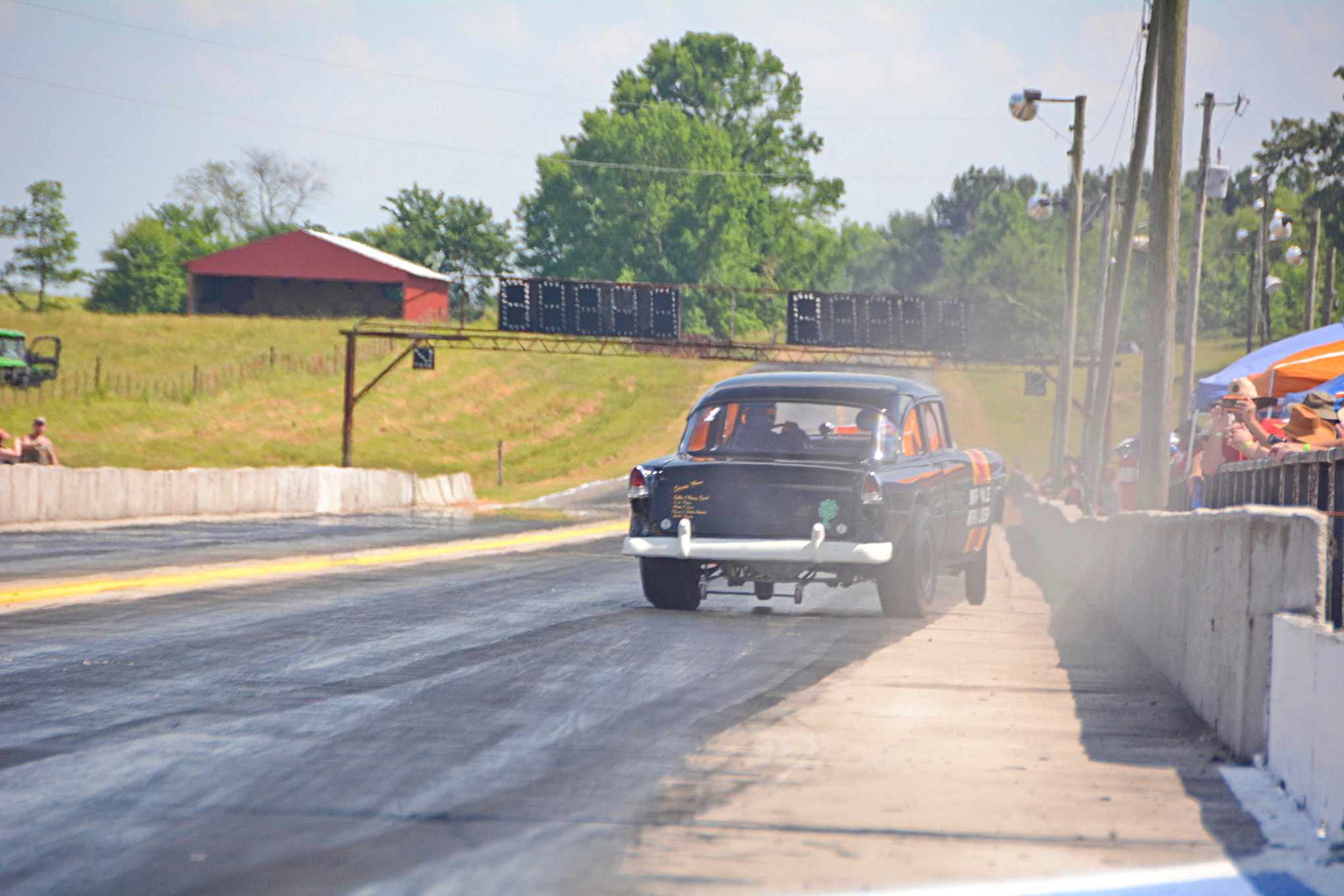 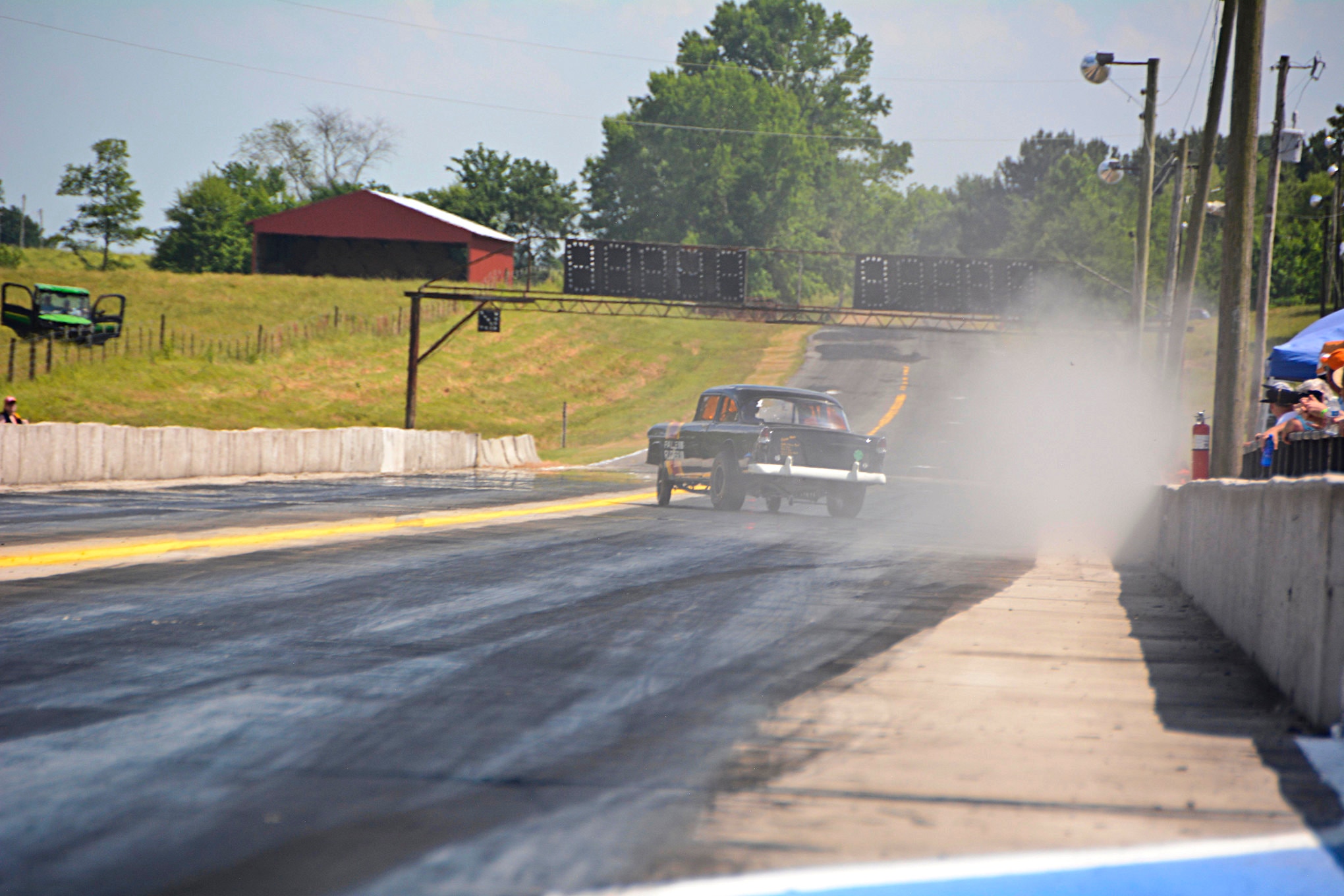 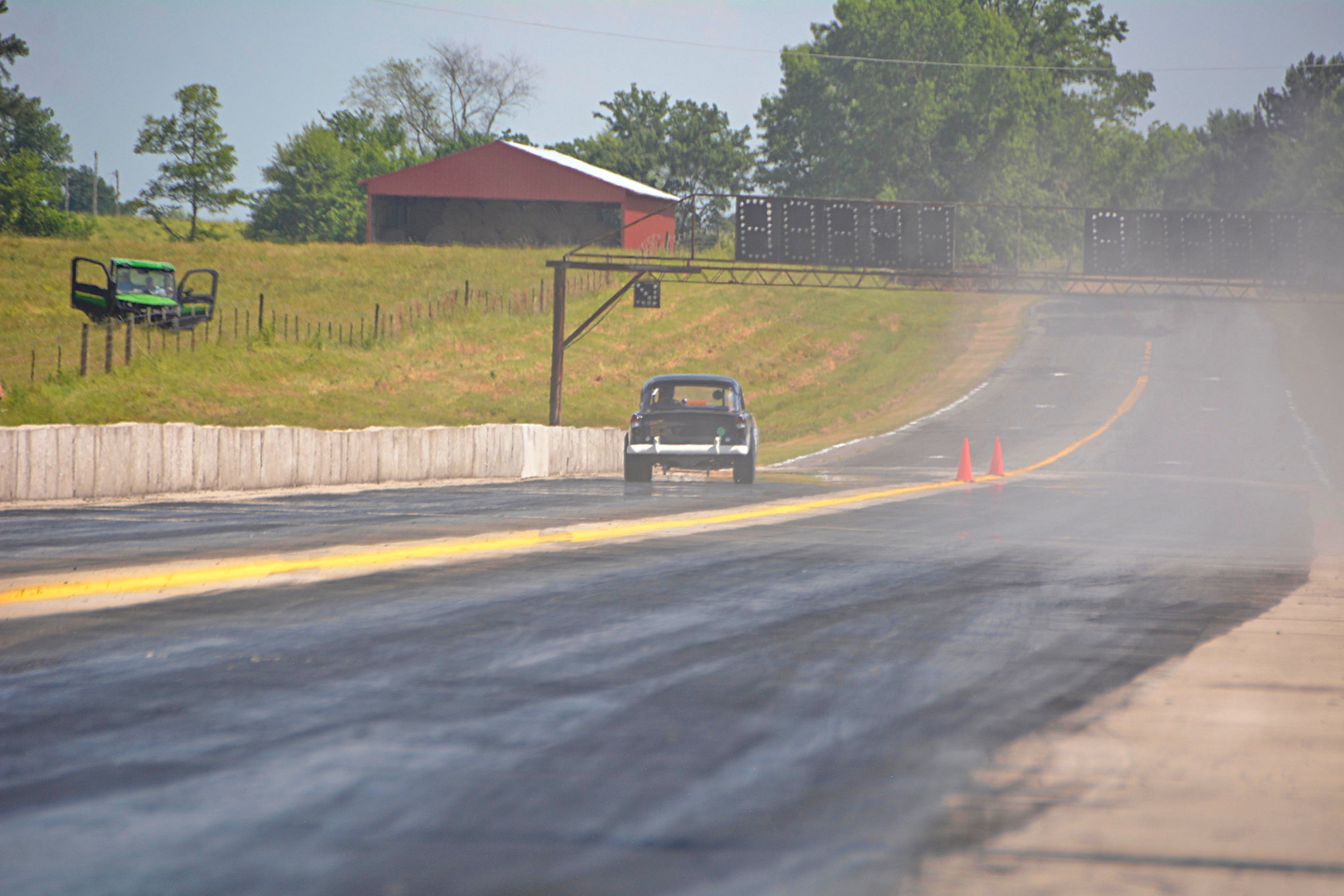 Even a single run in qualifying can provide a wow moment, as Shannon Smith displays here. The Pale Rider 1955 Chevrolet is one of the top contenders in the A/Gas category, and debuted a new paint job for the 2019 season. Unfortunately, this wild, wheels-up pass left some of the fresh paint behind on the wall, but Smith gathered it up after the car shot across the track. 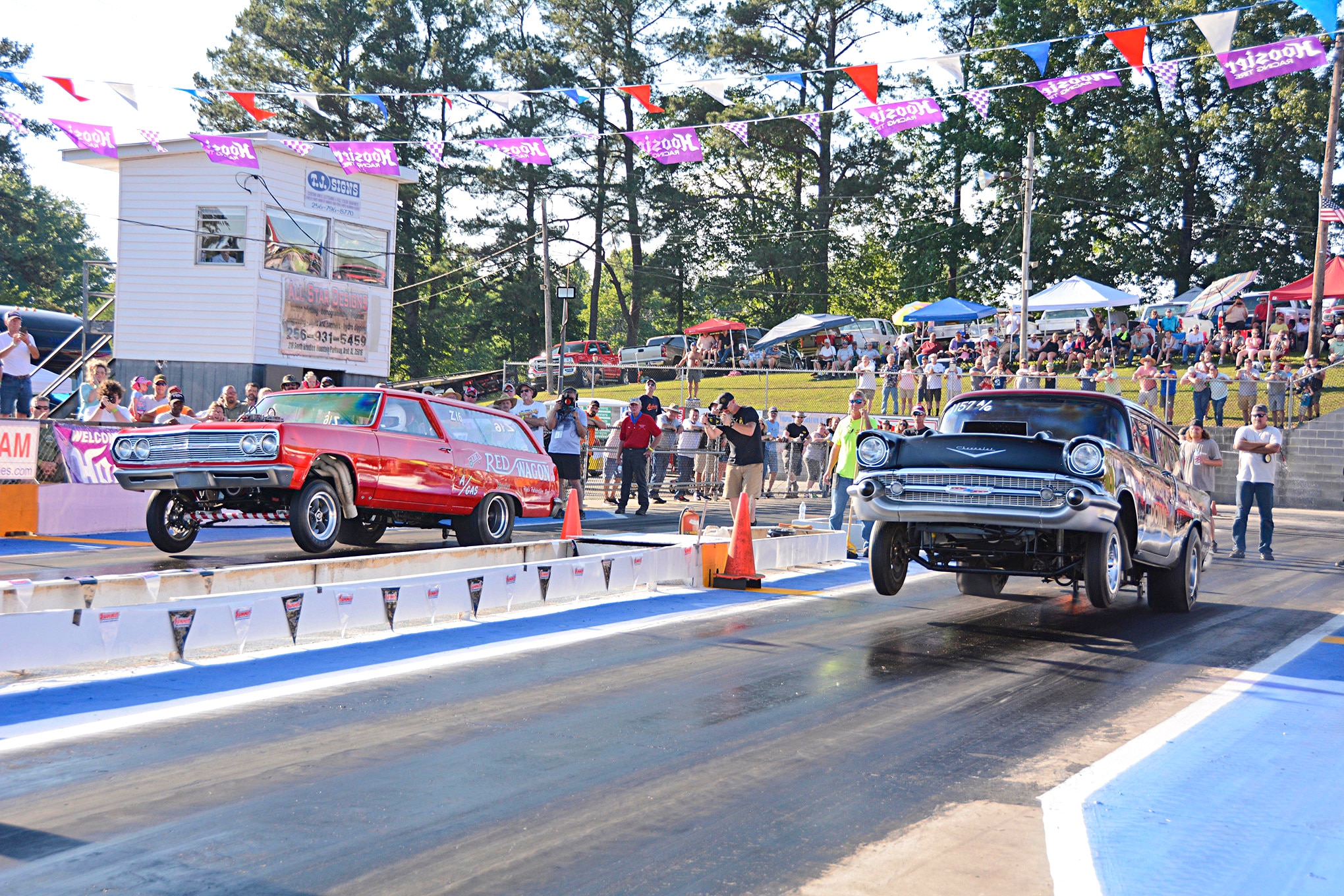 A station wagon shootout came in the first round of A/Gas eliminations, with Todd Oden’s Double Down 1957 Chevrolet wagon taking out Barry Lynn’s Lil Red Wagon Chevelle. Both wagons are powered by big-block Chevy engines, Oden’s going with mechanical fuel injection and Lynn’s with a tunnel ram and dual Holley carburetors. Oden would eventually make his way to the finals in A/Gas. 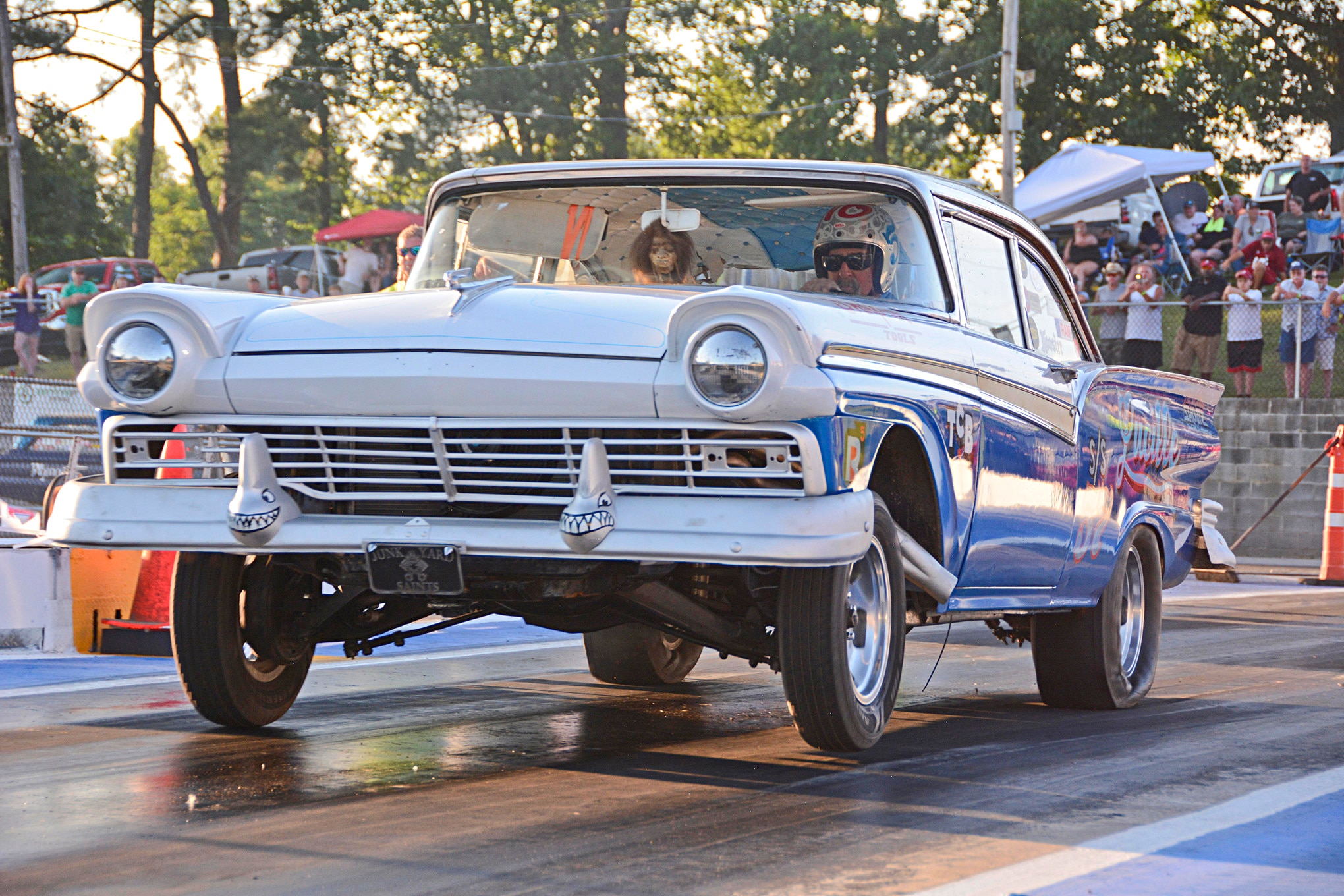 The Southeast Gassers Association has added Super Stock to the run order. Much like the gas classes, the Super Stock cars must have a manual transmission and retain a period-correct appearance. Seen here is Dale Morton in his 1957 Ford named Lucille. 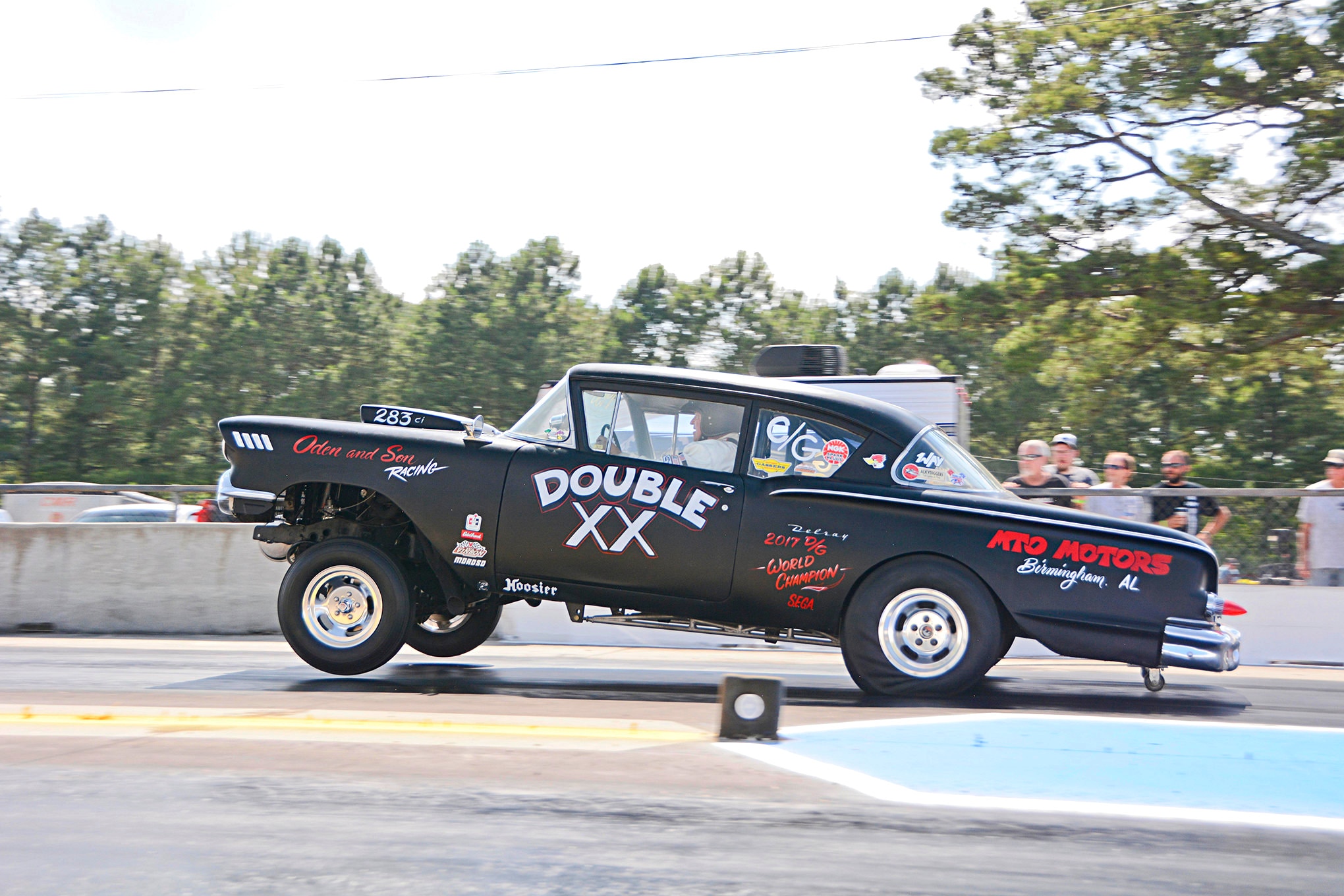 Todd Oden is from Leeds, Alabama, making him the hometown favorite in Baileyton. He pulls double duty, with C/Gas and A/Gas entries. His C/Gas car is this hefty 1958 Chevrolet, using 283 cubic inches of high-winding horsepower. Oden worked his way to the finals, where he defeated Tim Hall’s Scalded Dog Rambler. 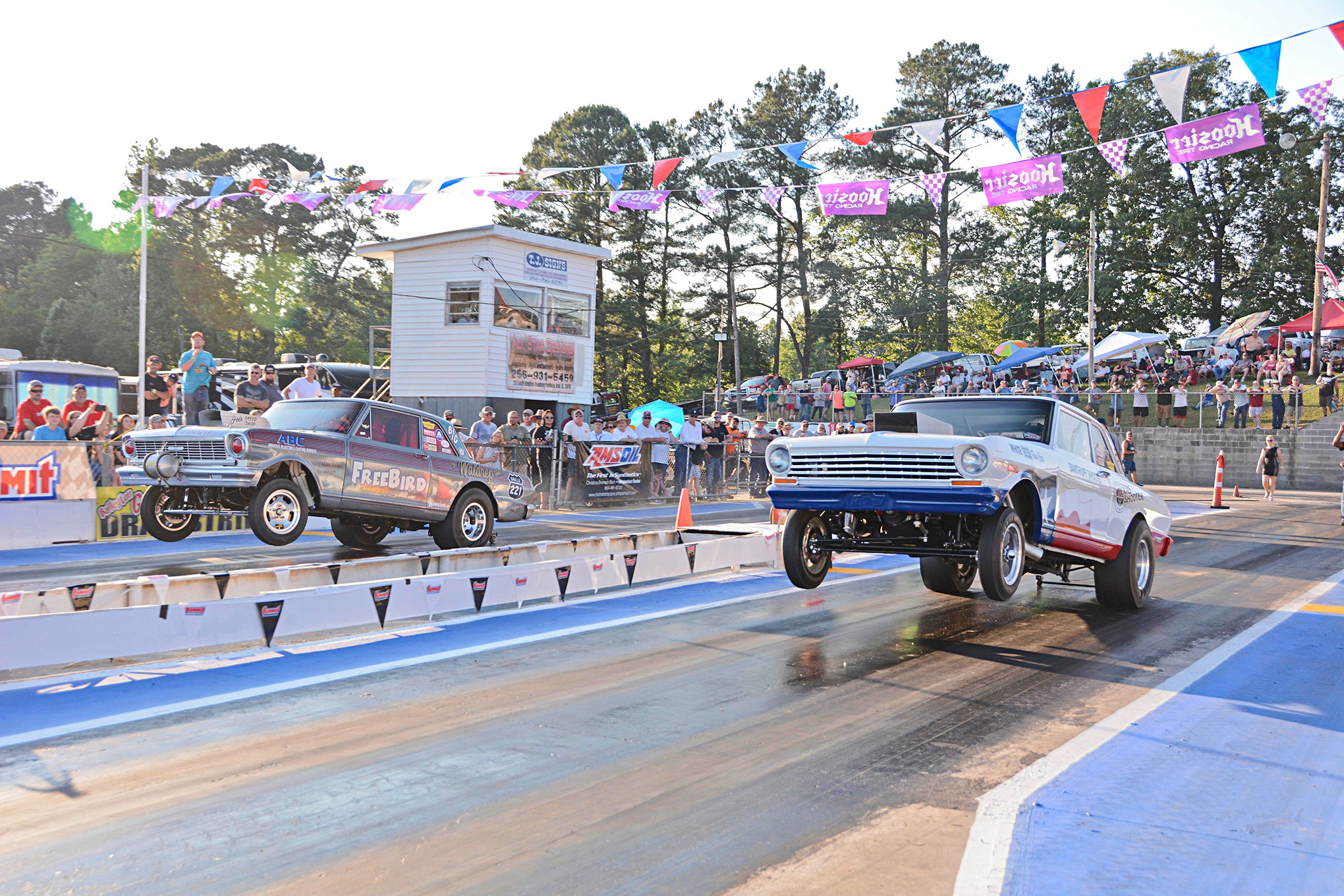 Ronnie Santhuff in the near lane makes his best effort to take out B/Gas favorite Jerry Birch in the Free Bird Chevy II. Birch would win this battle and go on to take the B/Gas victory at Baileyton. 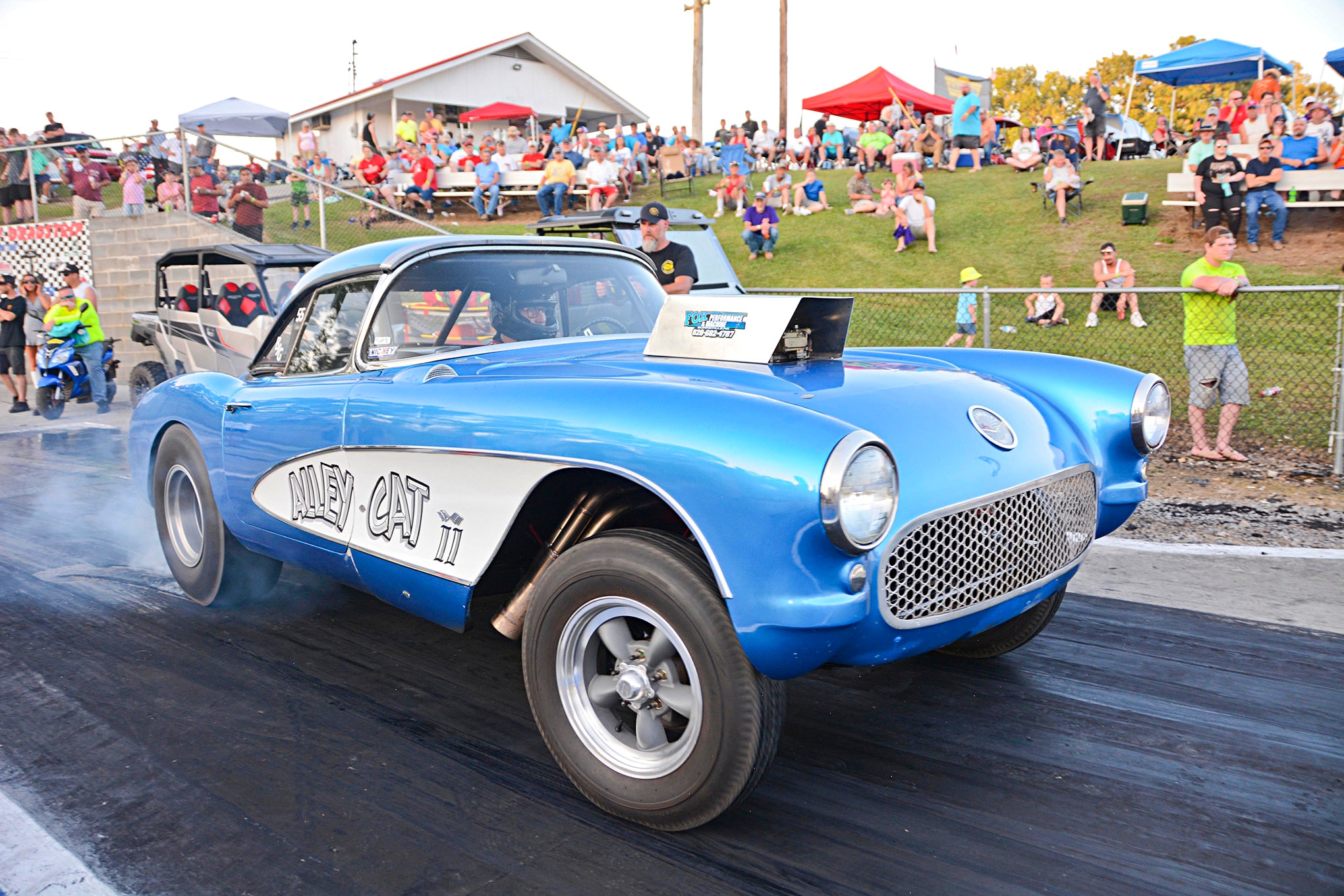 Tim Bailey’s Alley Cat II 1957 Corvette looks awesome with its sheetmetal scoop, fenderwell headers, and perfect stance. The B/Gas contender made it to the semifinals, where he was outmuscled by one of the only Mopar gassers in the field. 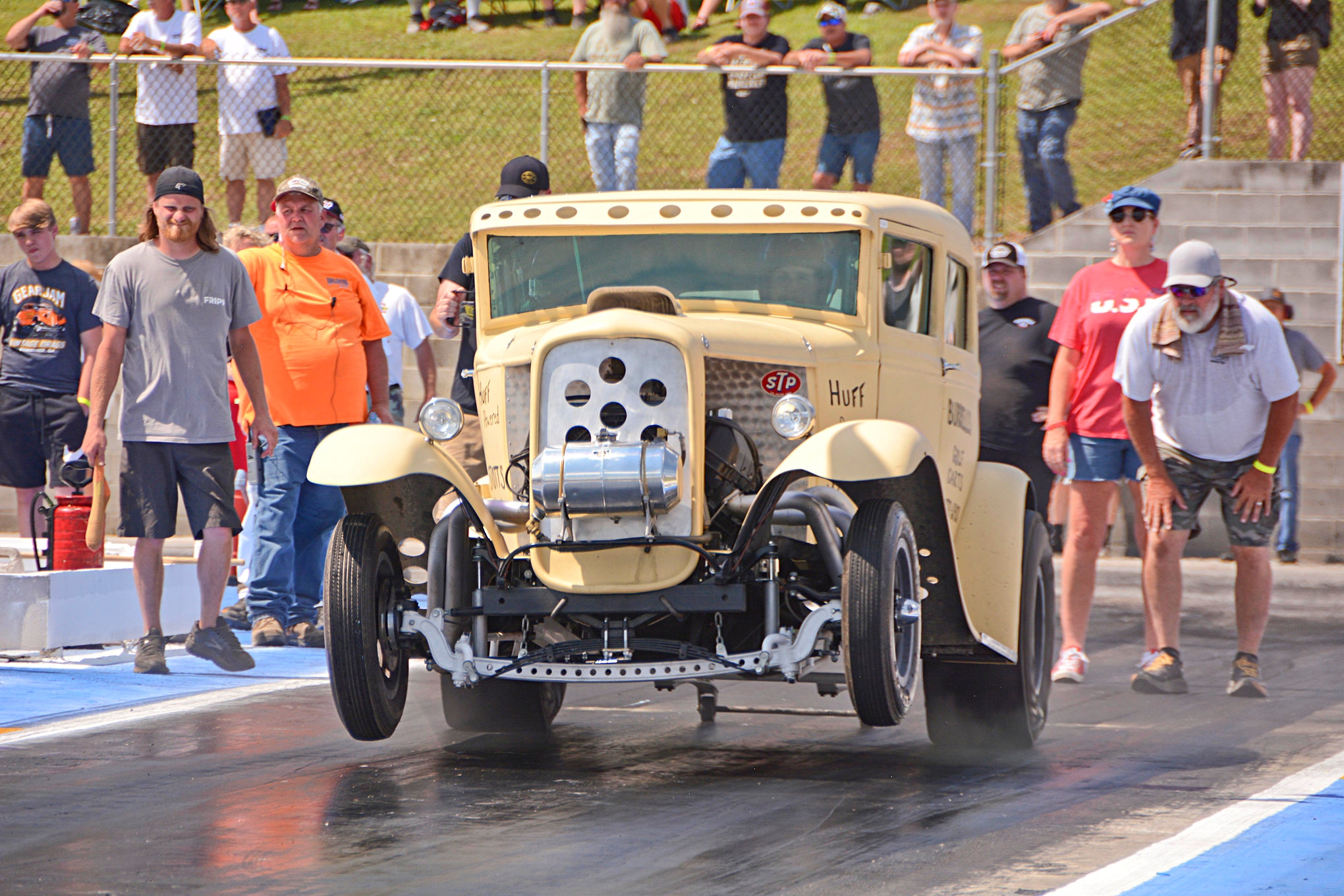 Part of the gas coupe and sedan rules package from 1967 required cars to retain fenders and a hood. The Southeast Gassers Association stands by these rules to stay true to the history of gasser drag racing. Gabriel Burrell is working the bugs out of his new creation for 2019, a Ford Model A sedan with a Jimmy Huff–prepared Ford powerplant. 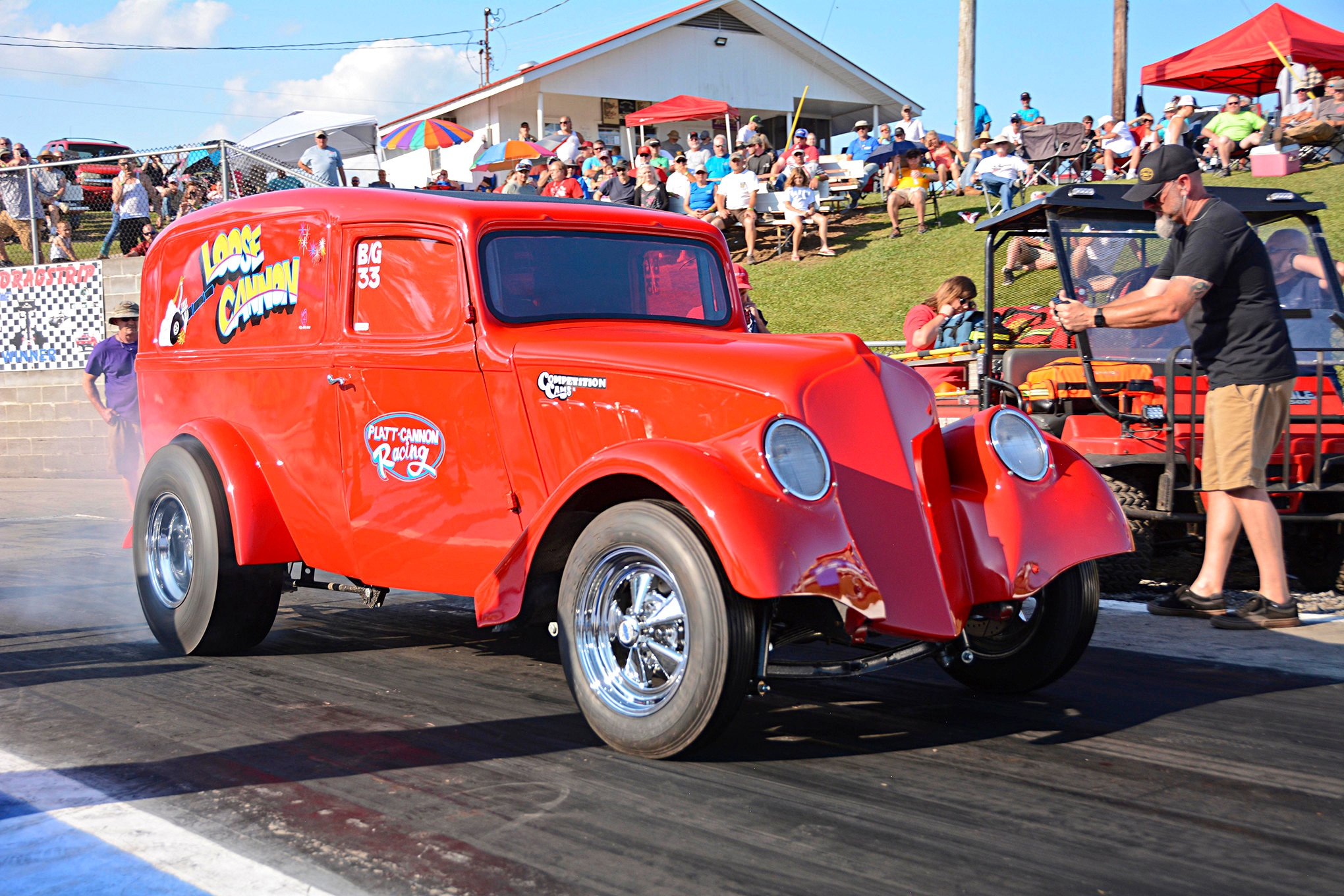 Kelvin Cannon keeps several gasser projects rolling, and this ’33 Willys sedan delivery is his latest out of the Platt-Cannon Racing camp. The bright red paint and Cragar S/S wheels really pop in the harsh Alabama sun. 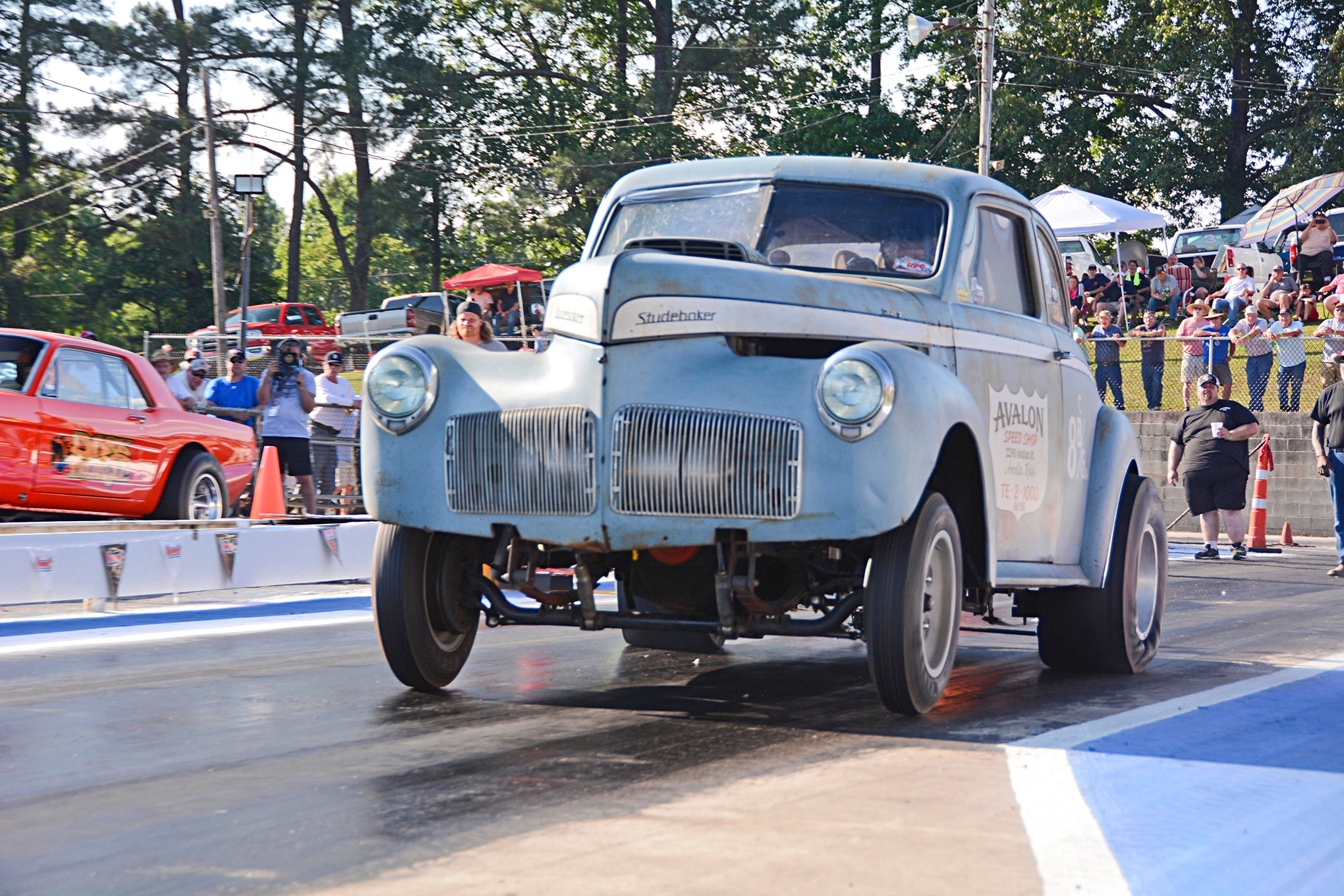 One of several racers making the long haul from Texas, Danny Graham campaigns this Studebaker coupe, which has the perfect amount of patina to go along with the small-window mags, injected small-block Chevy, and other period-correct details throughout. Danny runs in the C/Gas class. 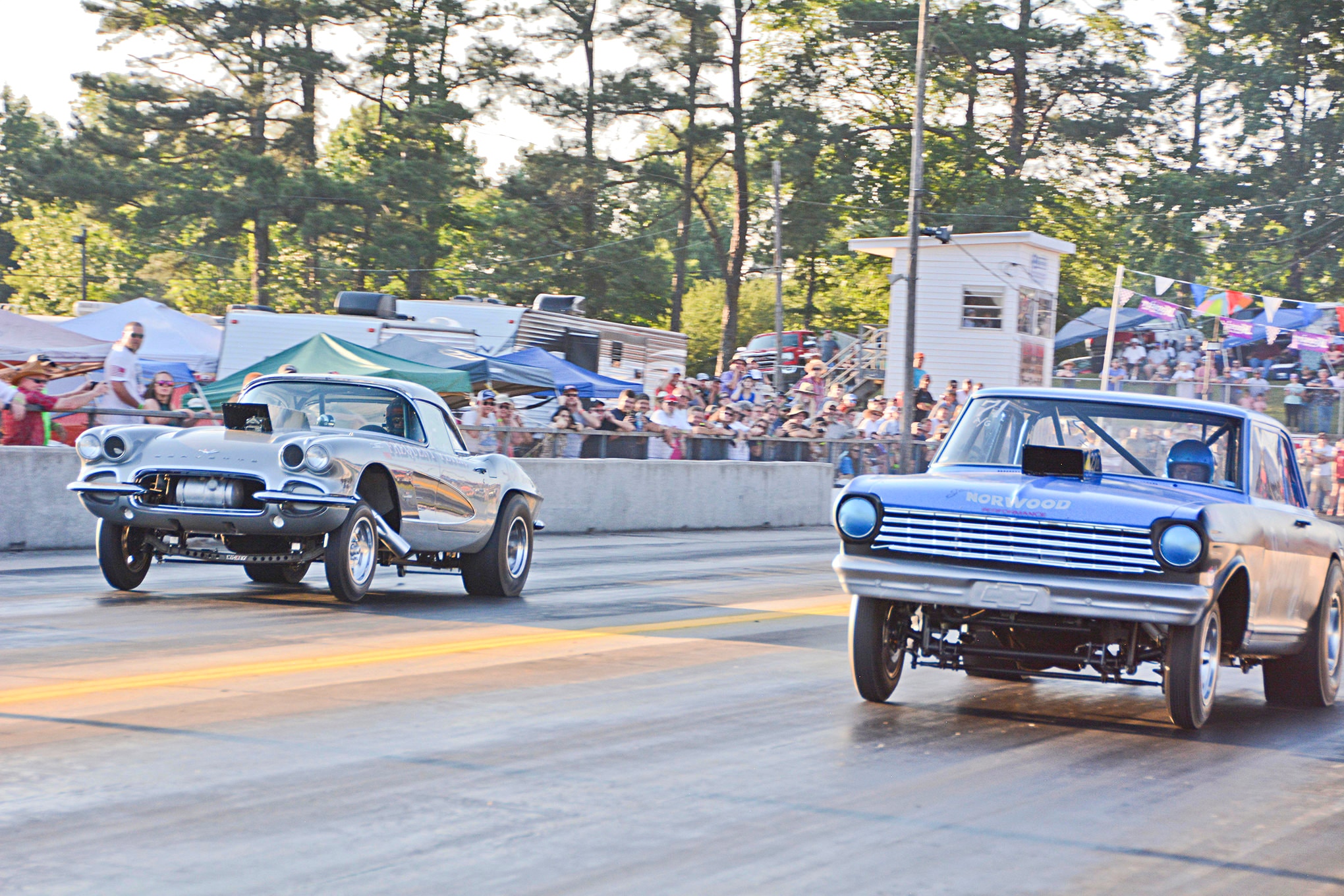 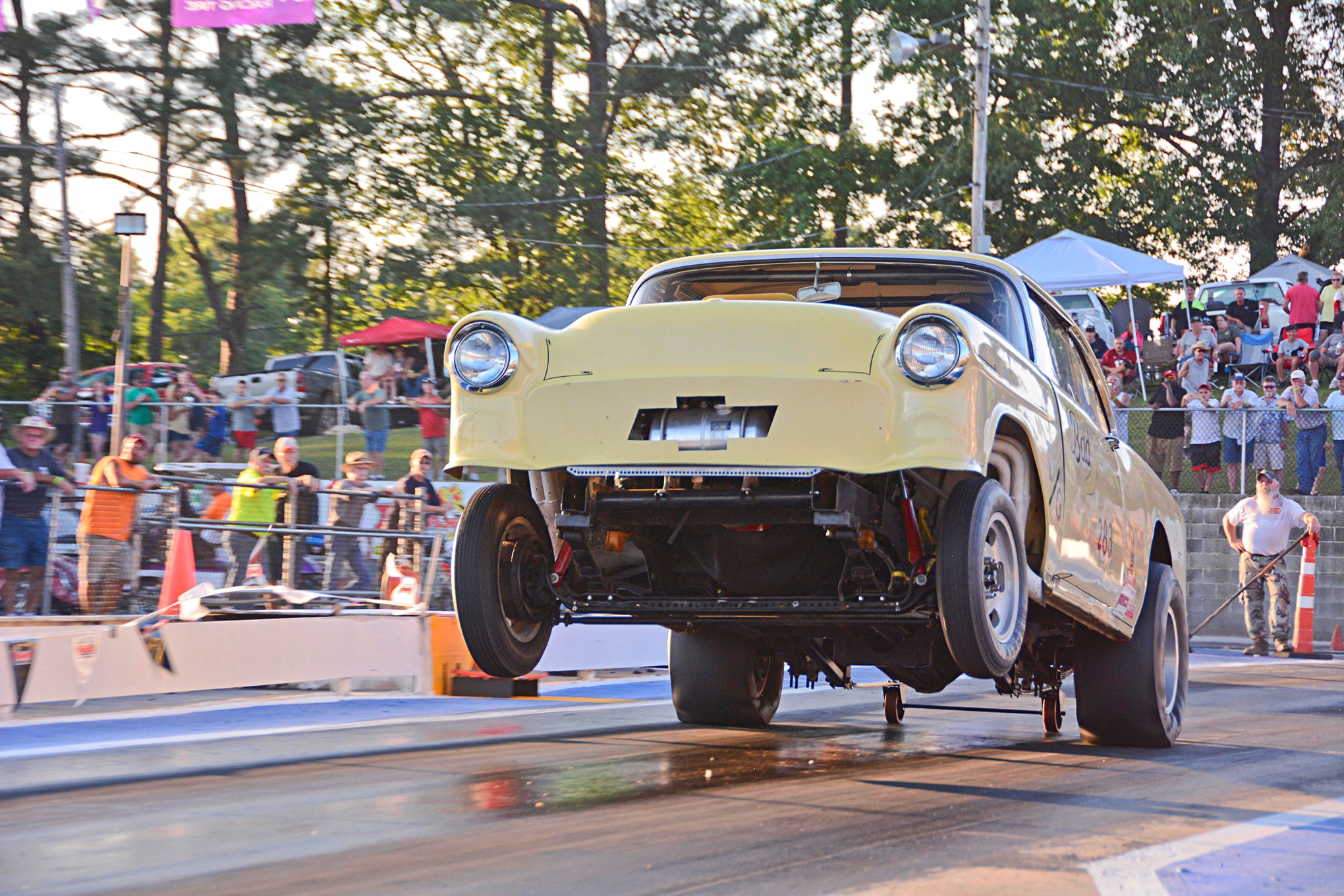 Rusty Sampsel is a SEGA regular who campaigns the Bad Banana, a 1955 Chevrolet drag car that his father built in the 1960s. The car is now running in the experimental D/Gas class, which calls for a sealed small-block Chevy spec engine from Scoggin Dickey Parts Center. Sampsel put on a show for the crowd, and proved that the crate engine had what it takes to power a period-correct gasser.