Weather is less than ideal for Saturday's SpaceX launch 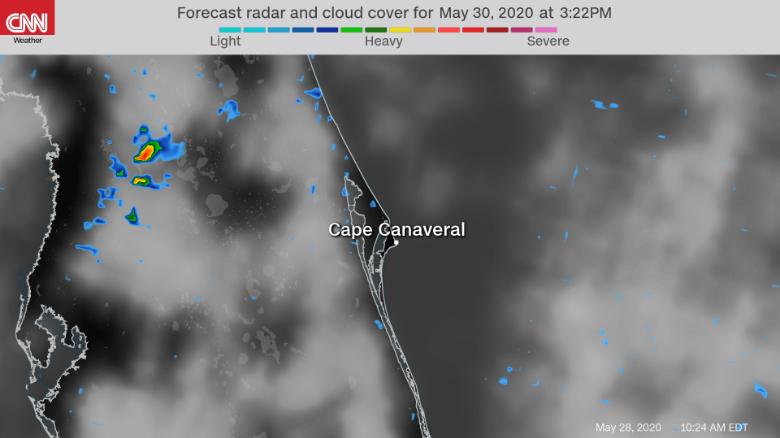 Weather again threatens the launch window for a SpaceX rocket to carry NASA astronauts on the first crewed spaceflight to take off from US soil in nearly a decade.

"Saturday and Sunday could turn out to have very similar weather as Wednesday did," CNN meteorologist Haley Brink said, referring to this week's scrubbed launch. "We may be waiting on a game-time decision again this weekend."
The next launch opportunity is Saturday at 3:22 p.m. ET, with a backup window of 3 p.m. ET on Sunday.
But the 45th Space Wing Weather Squadron says the odds do not look favorable. Right now, it forecasts only a 40% chance of favorable conditions for Saturday's attempt.
"The primary concerns are flight through precipitation, as well as the anvil and cumulus cloud rules associated with the afternoon convection," according to the official weather squadron forecast Thursday morning.
There had been a 50/50 chance Wednesday that the weather would clear, and 10 extra minutes might have given the launch team the green light. But the timing had to be just right for a proper rendezvous with the International Space Station.
"Weather is the one thing that we actually cannot control on our missions so unfortunately, it did cause us to scrub today," tweeted NASA.
During this time of the year, it is not uncommon for a sea-breeze along the east coast of Florida to cause pop-up afternoon thunderstorms.
It isn't always easy to forecast precisely where one of these storms will pop up. Still, forecasters can look at the overall pattern to see if conditions present themselves for thunderstorm development.
This overall pattern is why the weather squadron is giving a 60% chance of unfavorable conditions on Saturday. Within 24 hours of the launch, the forecast models will be detailed enough to give a bit better idea of where the storms will build.
Sunday has rain chances in the forecast as well, albeit a slightly lower chance than on Saturday, Brink said Thursday. The weather squadron also has 40% chance of favorable conditions on Sunday.
Rocket-triggered lightning is a launch hazard
A whole team of meteorologists is on hand from the 45th Space Wing and SpaceX to determine whether the weather will scrub the launch. As on Wednesday, the decision can be made right up to liftoff.
During the NASA broadcast on Wednesday, disappointment was evident as the weather team called it a no-go for launch.
Launch weather officers must be "clear and convinced" that no NASA "criteria are violated in order to give the weather GO call for launch," the 45th Space Wing Weather Squadron states.
For example, lightning in the area will cancel a flight, as will a cloud with a large enough electrical field to produce rocket-triggered lightning. This happens when a giant spark of electricity occurs when a large rocket flies through a strong enough atmospheric electric field.
The electric field needed to induce rocket-triggered lightning is much lower than for natural lightning.
"Either type of lightning could cause serious damage to the rocket and endanger public safety," the weather squadron states.
Forecasters also have to monitor the winds.
If there is a sustained wind of 30 mph or more at 162 feet above the launch pad, the mission will be canceled.
Here's a list of all the weather scenarios that will prevent a launch
The weather squadron also has to monitor the weather downrange because if the Crew Dragon capsule encounters a problem, it needs to have a safe splashdown location.
Earlier this month, NASA had to delay its launch of the Atlas V rocket, US Space Force mission due to Tropical Storm Arthur. It launched the following day after the storm cleared out.